Although we tend to associate twin cam engines with double valves (i.e. four valves per cylinder) with the late twentieth century and the present day in fact this level of sophistication dates all the way back to the time prior to the outbreak of the First World War. American company, Stutz, were not the only ones who built engines of this sophistication but they were certainly one of the most successful car makers to use this sophisticated engineering. 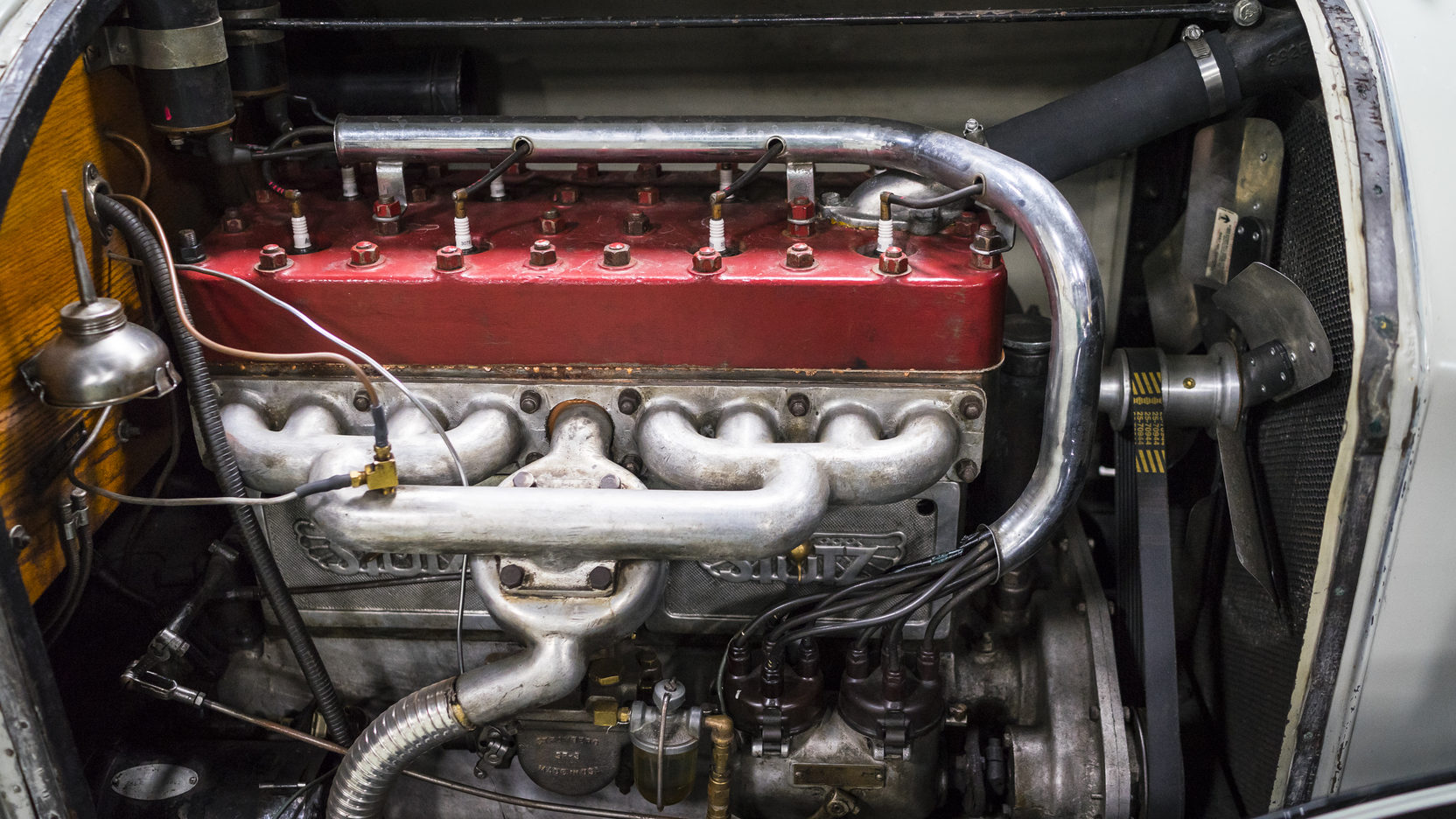 The observant will immediately notice the double distributors, double spark plugs, and double intake ports in the manifold of this Stutz F head engine.

The Stutz double valve, double ignition F head four cylinder engine first made its debut in 1917, as the United States entered the “War to End All Wars” as the First World War was called back then. The engine was a 360 cu. in. (5.9 liter) 16-valve in-line four cylinder that produced 88hp, more power than the Stutz six cylinder engine which produced 70hp. To put the power of that four cylinder engine in perspective the straight eight Packard engine of the time produced 85hp and the Cadillac V8 80hp. 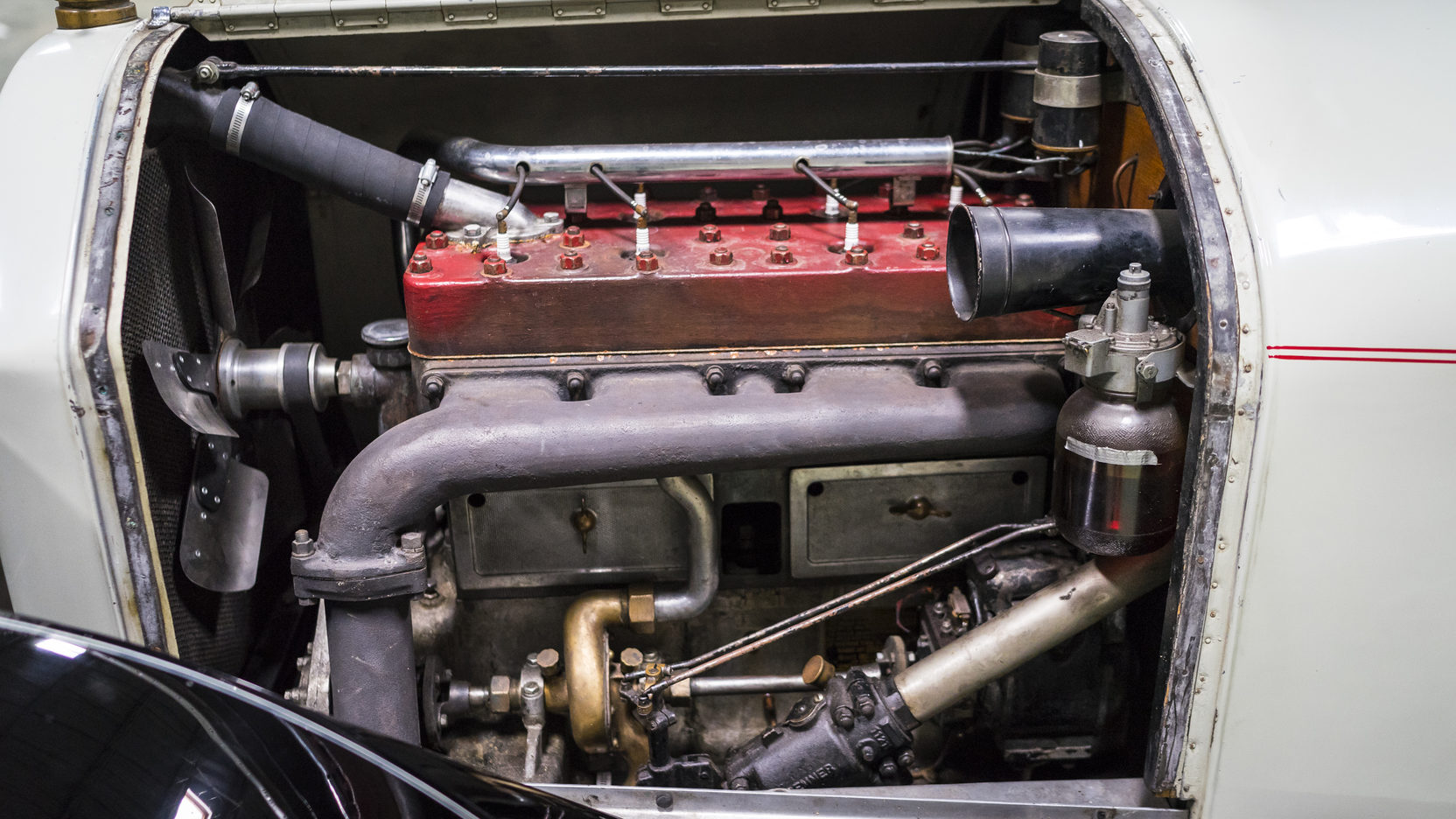 Stutz initially introduced this new engine in their legendary Stutz Bearcat model in 1917 and no doubt it was an absolute joy for the racoon skin coat and “bathtub gin” moneyed college guys. This was however not considered to be a car for the ladies as the clutch was very heavy and the brakes did not have servo assistance so they required a clod hopping size eleven boot to stop the car not a dainty size six. That being said there were some pretty intrepid ladies around in the twenties and no doubt there were those who gave the Stutz a try. 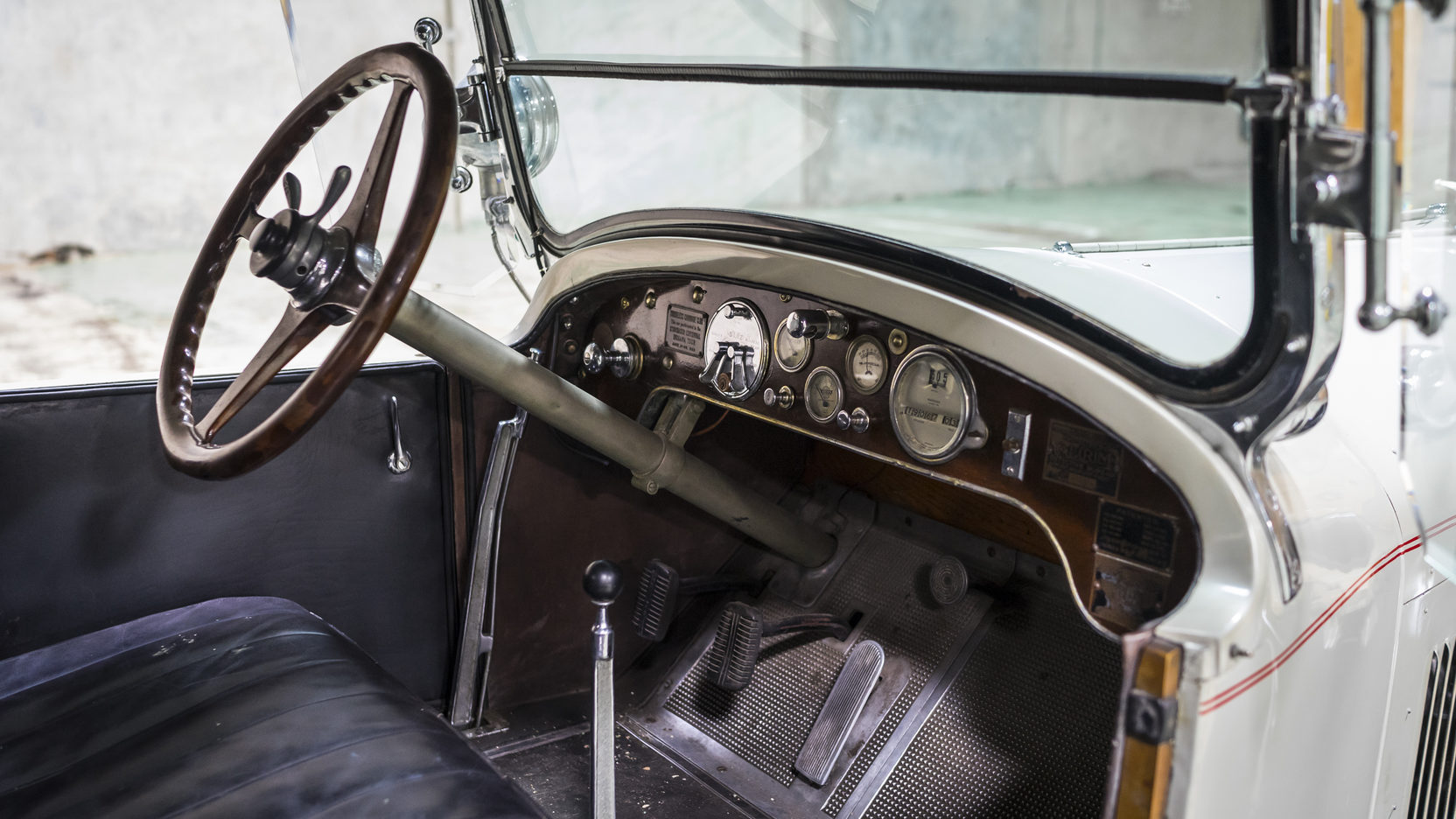 The Stutz acquired a reputation for being fast and exciting cars, but also as being cars that required physical muscle to drive them.

So although the Stutz had a reputation for being fast and powerful they were in a sense a bit of a “muscle car”, because you would need to use your muscles to drive one.

The Stutz Bearcat was the short wheelbase (120″) sports car but it was not the only model Stutz produced. By the early twenties Stutz introduced a new model called the Stutz Speedway fitted with the same sophisticated 360 cu. in. double valve, double ignition F head four cylinder engine as the Bearcat but built on a longer 130″ chassis. 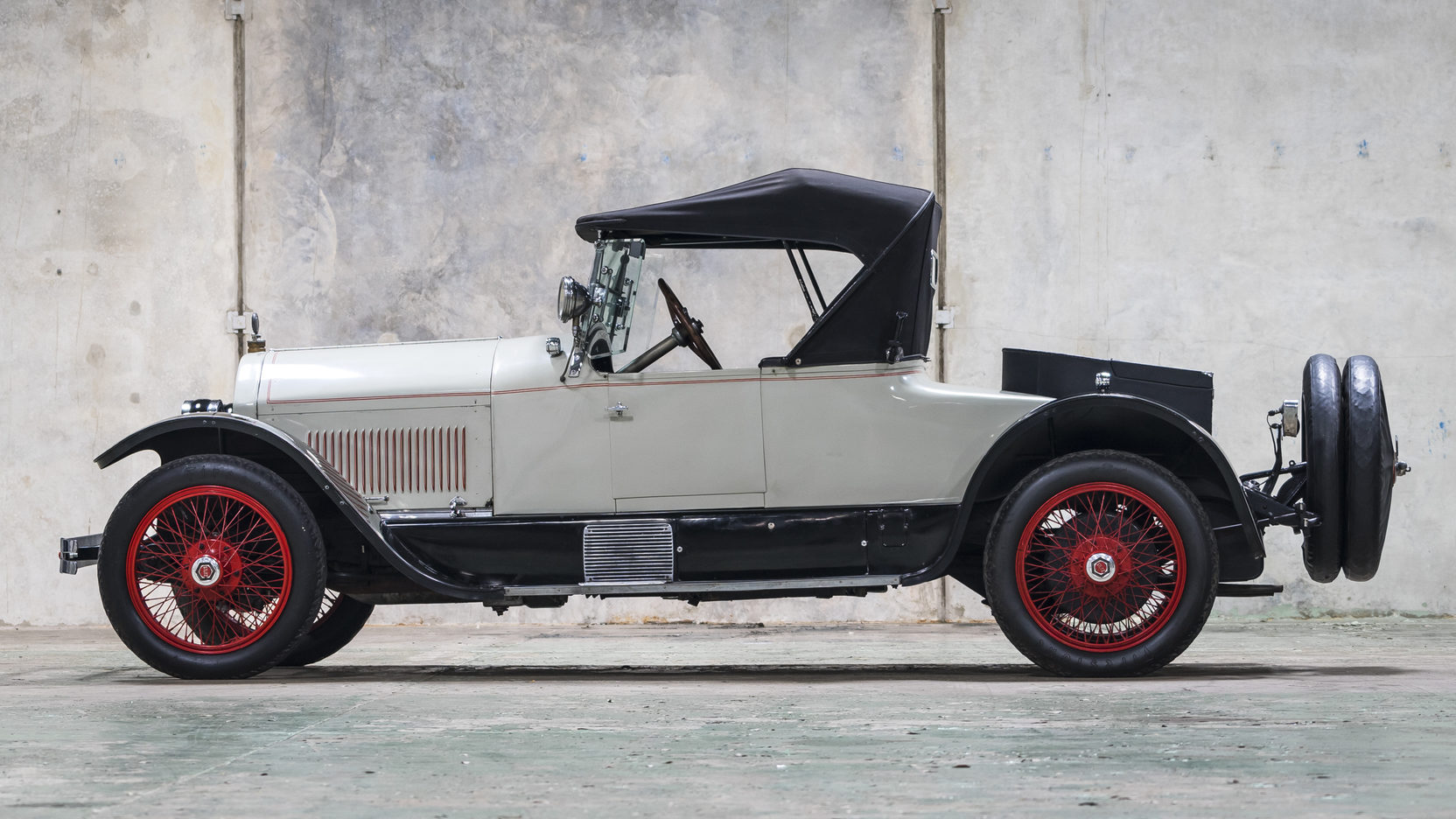 The Stutz Speedway shared the same engine as the Bearcat but was built on a slightly longer 130″ chassis. The car has rear drum brakes only which is one of the reasons these cars take some muscle power to stop them.

The Stutz Speedway was designed to be an upmarket luxury touring car with the Bearcat sports engine and three speed transaxle but with more room for luggage and the necessities of life when traveling. The Speedway made its appearance in 1922 and was made as an alternative model to the Bearcat which ended production in 1925. It was during this time in 1923 that Stutz ownership changed and the new management brought in a man named Frederick Ewan Moskowics who re-focused the company onto producing luxury “safety cars”. This led to Stutz creating their legendary DV32 eight cylinder engine and heading over to Le Mans in 1928 where they managed a creditable second place against the British Bentleys. 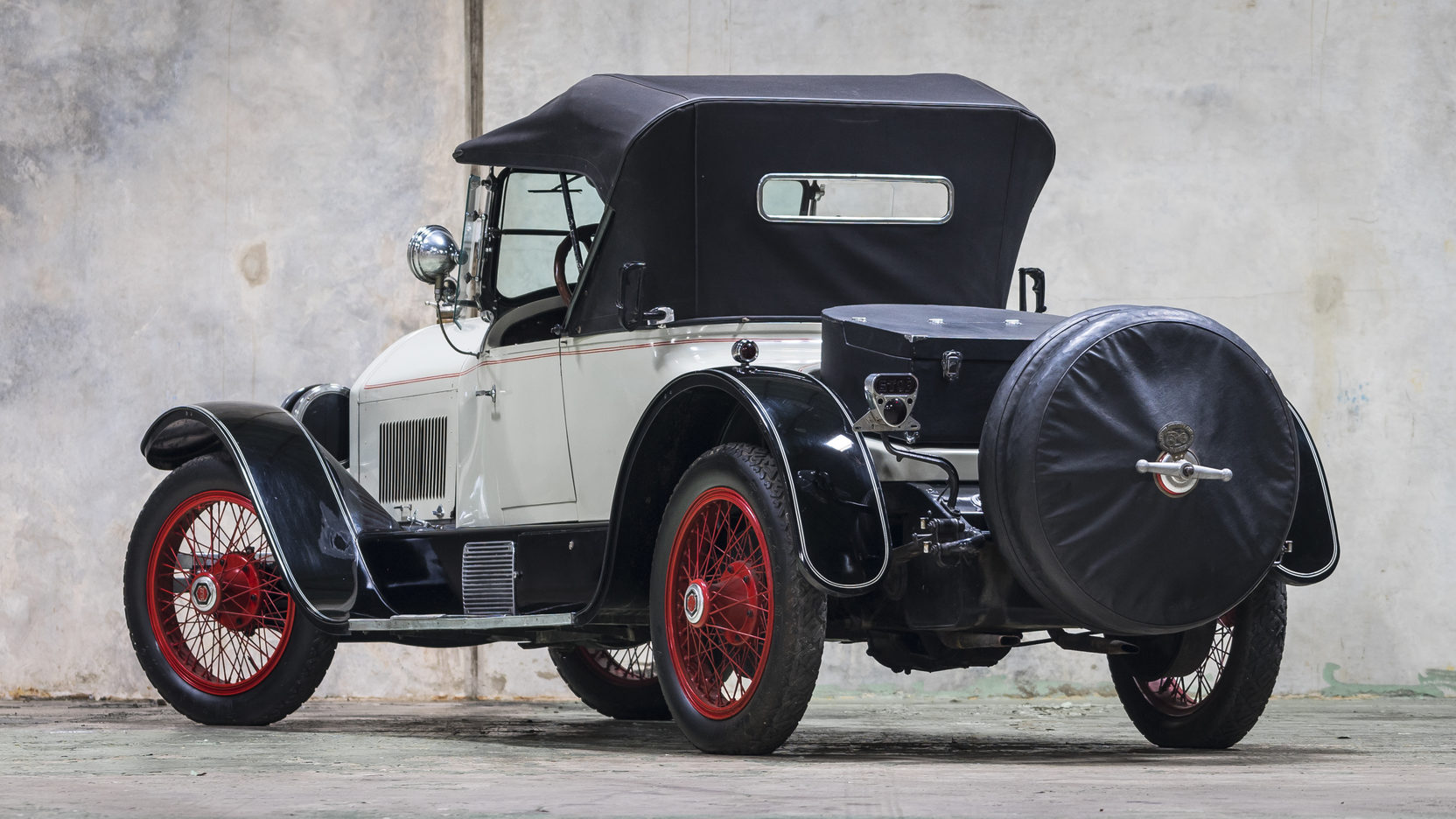 Stutz successfully competed at Le Mans in 1929 also managing a creditable fifth place with their supercharged DV32 straight eight enabling them to give the Bentley Boys a run for their money. Sadly 1929 was also the year of the Wall Street Crash that would lead to Stutz ceasing car production in 1935. 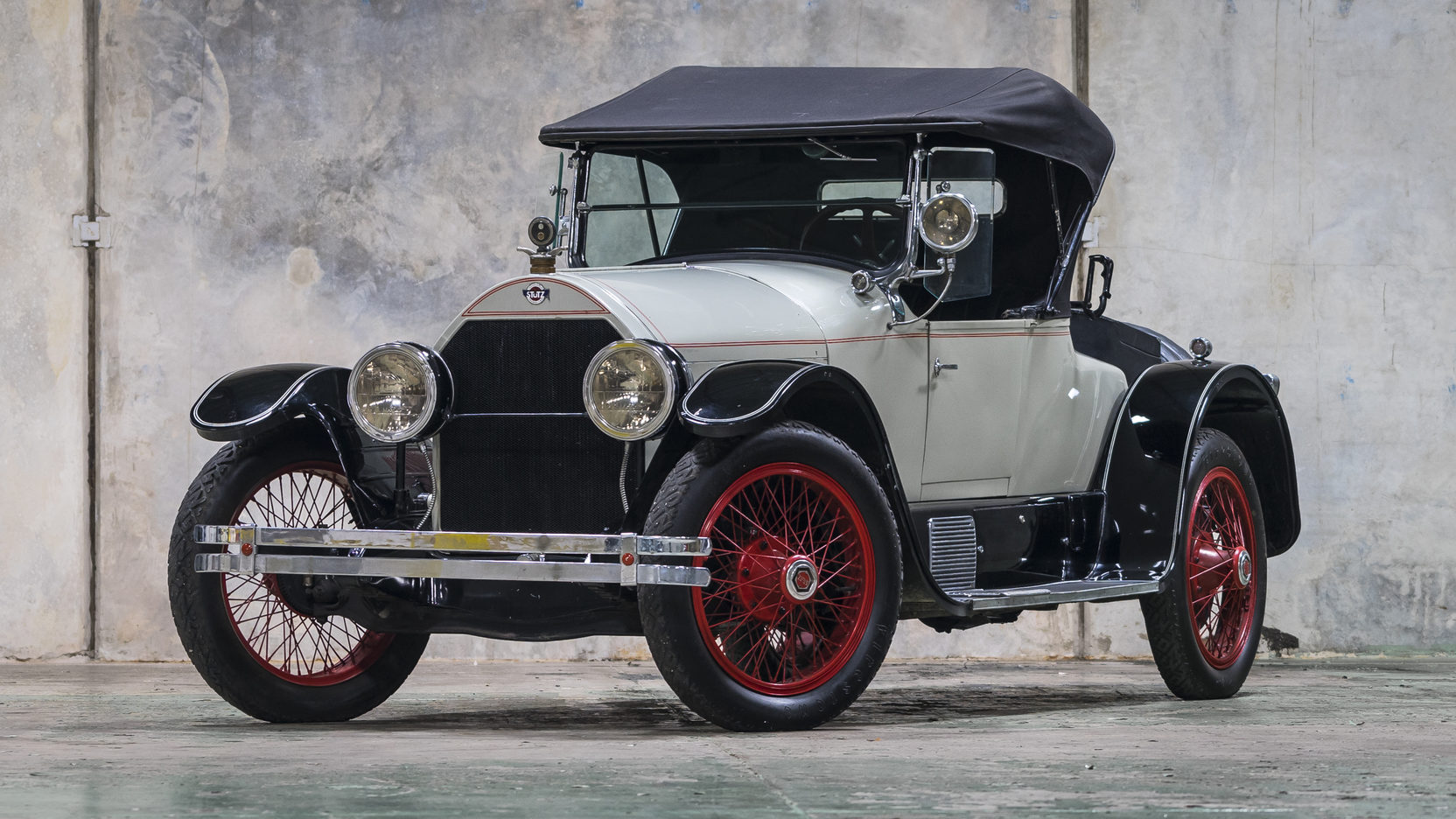 The gray 1922 Stutz Speedway Four Roadster in our pictures was restored in the 1950’s and is coming up for sale by Mecum Auctions at their Houston 2017 auction to be held over April 6th-8th, 2017. This car was a part of the Laquay Automobile Collection.

This looks to be an excellent and drivable twenties Stutz. The car wears a 1952 Studebaker Centennial Tour badge. 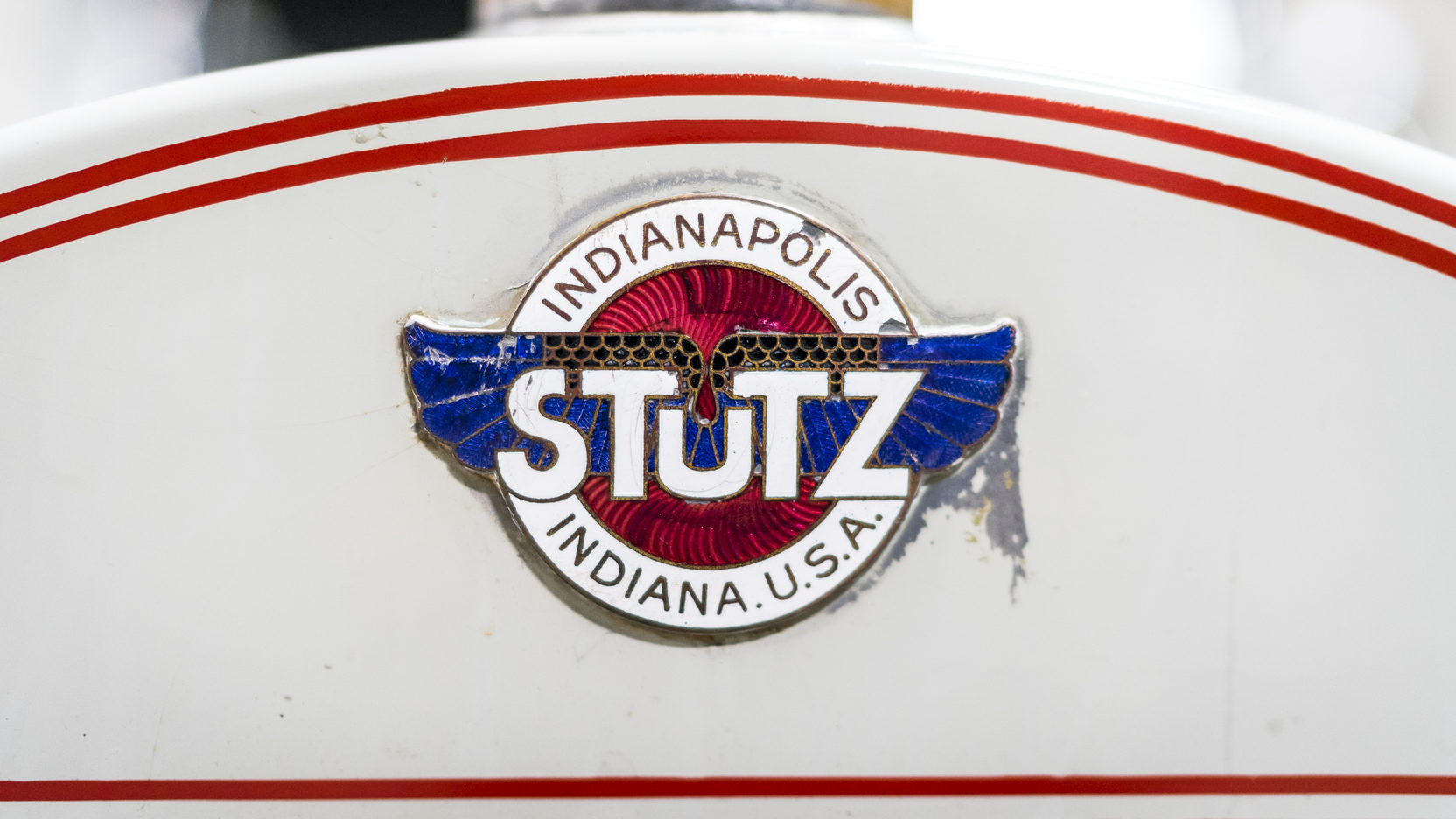