Heavy calibre hunting handguns are, in my humble opinion at least, enormously enjoyable to shoot. It can help to have arms like Popeye the Sailorman, and to have consumed your can of Spinach before lining her up and pressing the trigger, but it’s not essential. I’m not built like The Incredible Hulk, but I love shooting 44 Magnum revolvers, even one handed. However, the real advantage to a heavy calibre handgun for hunting is that it can be competently managed with one hand, leaving the other hand free to deal with foliage or provide some extra climbing support or deal with all the sorts of things a free hand is capable of. A handgun can also be carried conveniently in a holster leaving both hands free, yet be immediately brought into action.

The only real downside of a handgun as opposed to a rifle is that it simply can’t manage the same level of power that a rifle can. The 44 Remington Magnum in a revolver for example is a bit of a handful in more ways than one. By comparison the 44 Remington Magnum in a lightweight rifle is going to seem quite tame, even with heavy 300 grain bullets, and despite the fact that the muzzle velocity of the bullet exiting from the carbine is going to be higher than the muzzle velocity attainable from the revolver or automatic pistol with the same ammunition because of the handgun’s shorter barrel length.

Nonetheless there have been quite a number of inventive shooters who have wanted to combine power with manageability and practicality who have created cartridges and handguns to achieve the best possible result, and the Wildey pistol is one of those.

The Wildey pistol is a gas operated semi-automatic pistol that uses either wildcat cartridges based on the 284 Winchester rifle cartridge shortened to accept pistol bullets, or factory hunting factory rounds  such as the 45 Winchester Magnum, and the good news is that the Wildeys are once again back in production.

The Wildey pistol is an interesting pistol for a number of reasons in addition to the range of cartridges available for it. The Wildey is designed to be able to use cartridges generating a breech pressure in the order of 48,000psi. This is approaching the pressures common in modern centre-fire rifle cartridges. In order to accommodate such pressures the Wildey uses a unique and patented system of gas operation complete with an adjustable collar so that it can be adapted to whatever loading the shooter wishes to use.

An adjustable gas operating system is not unique of itself however. For example the SLR rifle (Browning FAL) as used by Australian and New Zealand soldiers in the Vietnam War had an adjustable gas operating system. The Wildey gas operating system however uses an air-hydraulic piston powered by the gases passing through six small holes in the barrel. That piston then powers the slide rearwards. The slide has a lug which actuates against one of the three locking lugs on the bolt rotating the bolt and unlocking the action. The Wildey has the distinction of being the world’s first gas operated semi-automatic pistol.

Despite its having been immortalised by Hollywood in the hands of Charles Bronson in the movie “Death Wish” the Wildey is not really a concealable pistol. It is a physically big piece of ordnance and not something one could slip into one’s pants waistband Israeli style and still be comfortable.

It is possible to have a Wildey that is almost concealable as you can see from the example pictured below, but it has to be a big pistol.

It needs to be big to be accurately shootable and as you can see from the next short video it is very controllable. This controllability is partly due to its physical size and also due to its excellent gas operating system which absorbs a portion of the recoil.


This controllability contributes to the accuracy of the pistol which is reported to be excellent. James E Fender describes it this way in a quote taken from the Press section of Wildey’s website:

“I must say that I surprised myself when I shot the sub one-inch group.  I was hurrying to perform some velocity testing ….before a threatening rainstorm broke.   I was paying much more attention to make sure that the bullets were going over the skyscreens, and had to look twice through the spotting scope…to make sure my eyes were not playing tricks on me.  If a shooter rigs a scope on the Wildey Survivor I believe accuracy such as I achieved with open sights will be the norm…”

With its excellent ergonomics, single action trigger with efficient de-cocking lever, patented hammer block and trigger block, interchangeable barrel/calibre system, and recoil taming gas operating system, the Wildey is a highly desirable pistol for hunting and for trips into wilderness areas where the local creatures can be large and occasionally unfriendly. Some may criticize the European style magazine release which is located on the butt of the pistol and not in Colt 1911 style as a push button beside the trigger guard. However, the sheer size of the Wildey would preclude all but those with prehensile fingers from comfortably reaching a 1911 style magazine release on a pistol of this size, and, in any event, if you do some Israeli style pistol training you will be taught not to just trust that the magazine will fall out when you release it but to positively remove it to make sure its out before you try to insert the next one. If you follow that style of training then a European style butt mounted magazine release makes more sense.

If you are looking for an accurate and adaptable hunting handgun this might just be the one for you. 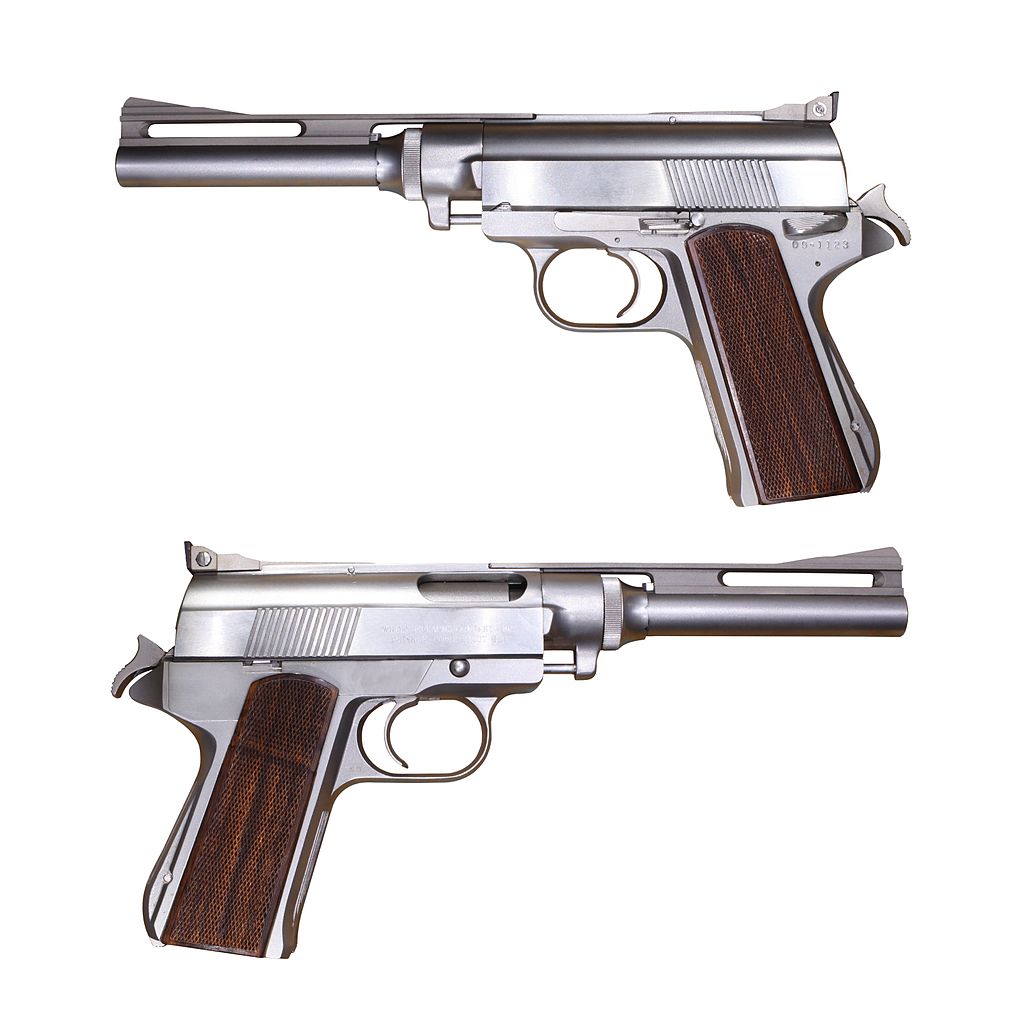 (Feature image at the head of this post courtesy of icollector.com)

The Austin A90 Atlantic

Brother to the Dingo by Murray Mitchell