The words “Alfa Romeo” conjure up a whole different set of ideas as opposed to words like Hyundai, or Ford, or Toyota. There is a heritage behind Alfa Romeo that such others don’t have, an Italianness that promises exotic things that non-Italian cars mysteriously can’t offer. Other cars may be very good, they might be more reliable at getting one from “A to B”, they might even be “hybrid” and thus environmentally friendly and they might even have automatic transmissions to make driving completely effortless (if you happen to like that sort of thing); but if they’re not Italian then they just can’t offer that enigmatic something that the likes of Alfa Romeo, Lancia,  Ferrari etc. just ooze all over the kerbside. Even the humble Fiats have something that things un-Italian just don’t.

This does not mean that an Italian car is going to be the best buy for you. I think I’ve suffered more frustration, burns, scars and uttered more colourful words trying to fix someone’s Italian car than I have for most others – with the possible exception of my past Land Rovers, about which I can well understand why the heroes of the movie “The Gods Must Be Crazy” called theirs “The Anti-Christ”. How do you finish up with a Land Rover winched up a tree? Try bleeding the brakes on a Series 2A. The workshop manual tells the mechanic to “raise the front of the vehicle to an angle of thirty degrees”, so a winch and a sturdy tree were the tools of choice if you were “out bush”.

Which brings us to the Italy in the nineteen thirties. Benito Mussolini and his Fascist party had become to Italians what Adolf Hitler had become to the Germans. Mussolini fulfilled his promise to “get the trains to run on time”, which I think was a bit of an un-Italian thing to insist on, and then went on to promise Italians a new Fascist Roman Empire which they would somehow share with the new Third Reich and a new Japanese Empire in Asia. I sometimes wonder if Benito thought to ask the Italian people if that was what they really wanted or not – because not everyone wants to rule the world.

It was into these heady days of nationalist fervour and boringly predictable train time-tables that the Alfa Romeo 6C 2500 was born in 1938. It’s predecessor, the 6C 2300 had already succeeded in becoming one of the most beautifully blood stirring pieces of automotive art ever created.  It may have had a smaller engine than an American Auburn Speedster. It may have even looked a bit like an Auburn Speedster, but it had that something that the Auburn didn’t. It had what might best be described as  Italianness on steroids.

The 1934 Auburn Speedster boasted a 4.5 litre supercharged engine compared with the Alfa’s 2.3 litre, and the Auburn combined the enormous power of that huge blown engine with a grace and poise that still turns heads in the twenty first century. But somehow the Alfa, though it looks quite like the Auburn, has that mysterious Italian “something”.

The 6C 2500 had a slightly larger engine and it too served up Italianness in gorgeous proportions despite the dawn of yet another world war that led some to believe that Adolf Hitler was himself the Anti-Christ, the Land Rover took over that title a decade later. Alfa Romeo 6C 2500’s were built with a variety of body styles by Alfa Romeo and other coach builders most notably Touring of Milan. In the shadow of the war a few hundred 6C 2500’s were built of which the Alfa Romeo 6C 2500 SS was one of the stars and remains today one of the most desirable examples of Italian automotive art extant.

Alfa Romeo survived the war, whereas Benito Mussolini didn’t. The Italians decided that although they sort of liked having trains running on time, the idea of ruling the world again was something they really didn’t want, a case of “been there, done that, it was overrated”. So Benito found himself hanging from a meat hook in a town square in a somewhat deceased condition, as Monty Python would put it, “he’d become an ex dictator”. The Alfa Romeo 6C 2500 continued in production after the war and was instrumental in putting the company back into the most fashionable circles. 6C 2500’s were owned by the likes of Rita Hayworth, Tyrone Power, and Prince Ranier of Monaco who later married Grace Kelly. The 6C 2500 came in various body styles and with either a single or triple Weber carburettors. But perhaps the most Italian of them was the SS, preferably in red to commemorate the blood shed from the knuckles of the mechanics as they tried to synchronise those triple Weber carburettors. This is the car that has been immortalized in an oil painting by Hendrik Muller coming up for auction at Bonhams “Quail Lodge Auction” on 15th August 2014. So, if instead of a landscape, or portrait painting you think you might like a portrait with a difference, a portrait of something that crosses the divide between industrial design and art to become art in it’s own right, then this painting might just be something you will want to bid for. 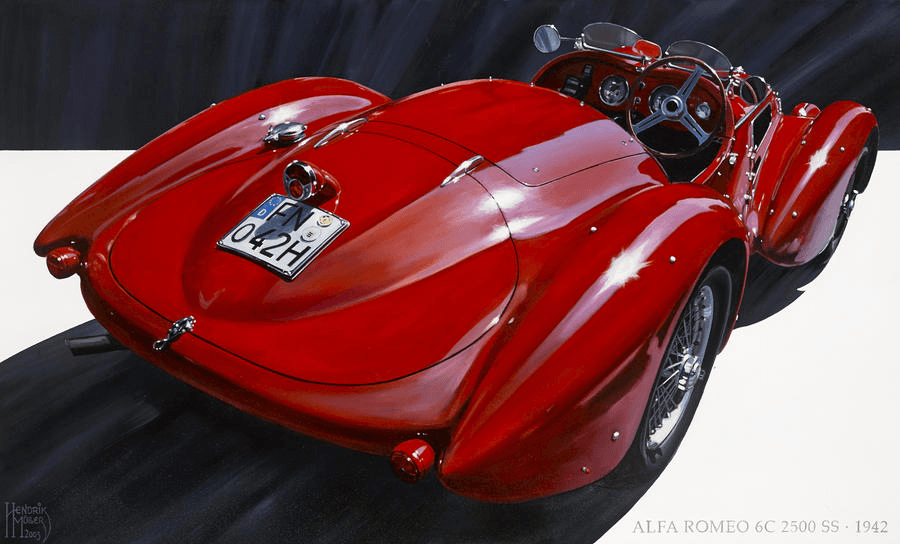