John Moses Browning is America’s most famous firearms designer and visionary, most of his designs are still in use, even the 1887 lever action shotgun that is said to have been his least favorite creation yet in its new guise from Chiappa it is gaining ground in Cowboy Action shooting. John Moses Browning is mostly associated with Winchester but he also did design work for Belgian firearms maker Fabrique Nationale who were and are still working in collaboration with Winchester. If you go and look at a current Winchester Model 70 Alaskan you will find they are made by Fabrique Nationale in Europe. Fabrique Nationale are associated with Winchester and with Browning but historically they have not only been in the business of making firearms but also at one stage got into the motorcycle manufacturing business. 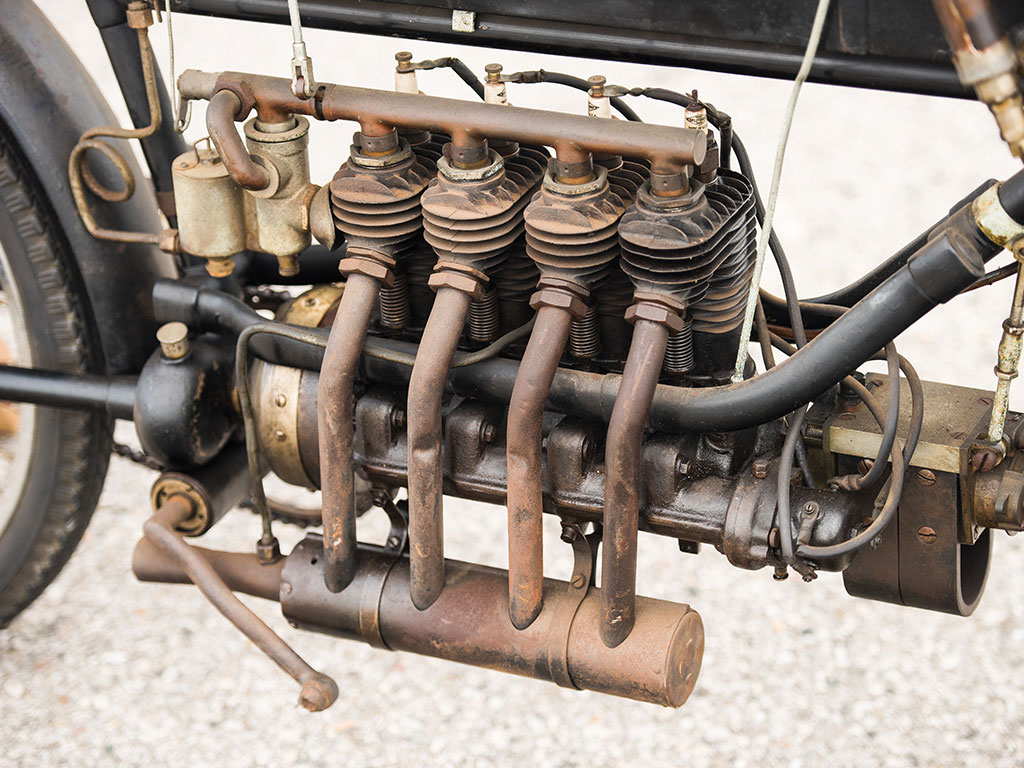 In 1905 FN caused some surprise when they showed this early motorcycle at the Paris Cycle Show of 1905. It was and still is an impressive bike with its smooth four cylinder side valve engine coupled to a shaft drive to the rear wheel. Cycles of that era were all still expected to have pedals and this bike is no exception to that, but the overall design including the way the engine is mounted is really quite impressive. 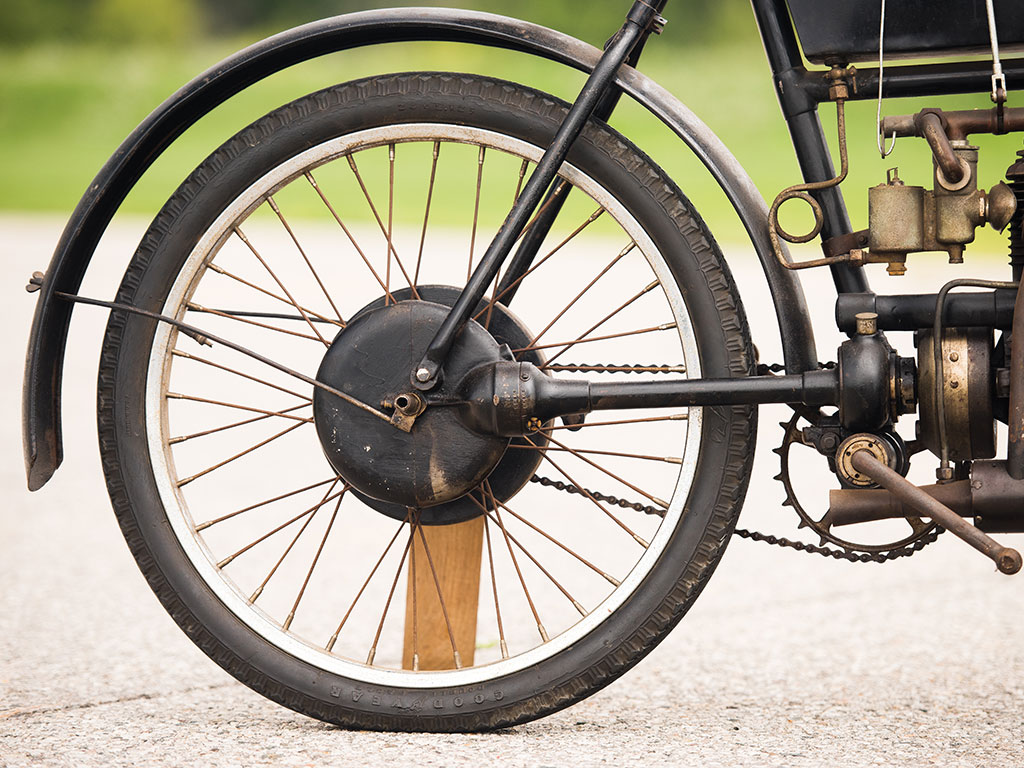 The shaft drive to the rear wheel is an impressively forward thinking design feature.

This 1905 model also features leading link forks and actually looks to be quite a practical and easy to ride machine. 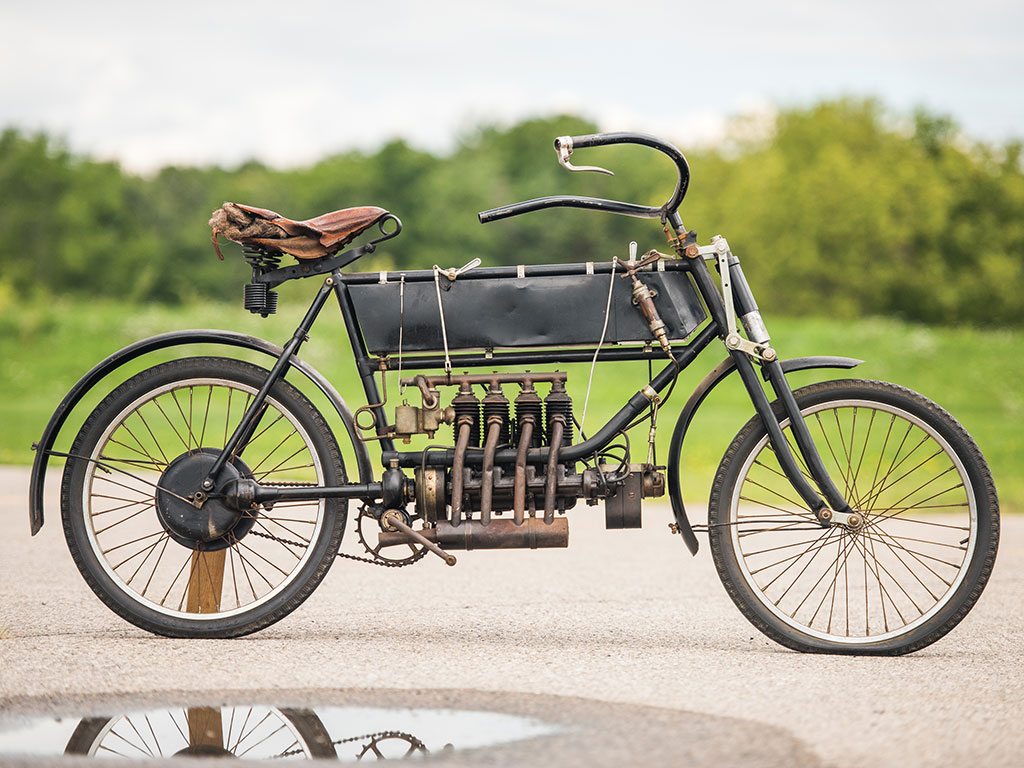 This interesting bike is coming up for sale by RM Sotheby’s at their Hershey auction on 6th-7th October 2016.

You’ll find the sale page for this bike if you click here. 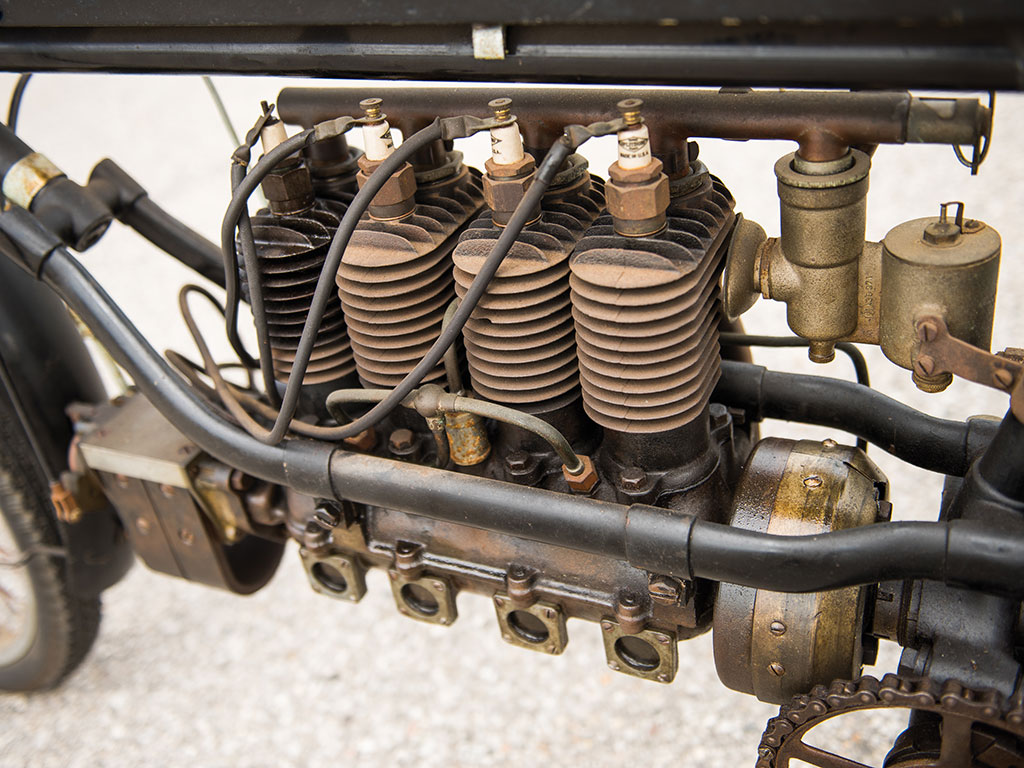 The engine is mounted in the frame in a very clever way.

Just looking at this bike reminds me of a “Banjo” Paterson poem about a man who lived around the time this bike was made. His name was “Mulga Bill” and he decided that his horse was too old fashioned and he needed to get with the times and become more modern and fashionable. Mulga Bill didn’t buy a motorized bicycle but just a pedal powered one and if you read his story you’ll appreciate that it is best he didn’t go and buy himself a 363cc FN motorized bike, or his story might have had a far more tragic ending than it did.

‘TWAS Mulga Bill, from Eaglehawk, that caught the cycling craze;
He turned away the good old horse that served him many days;
He dressed himself in cycling clothes, resplendant to be seen;
He hurried off to town and bought a shining new machine;
And as he wheeled it through the door, with air of lordly pride,
The grinning shop assistant said, “Excuse me, can you ride?”
“See here, young man,” said Mulga Bill, “from Walgett to the sea,
From Conroy’s Gap to Castlereagh, there’s none can ride like me.
I’m good all round at everything, as everybody knows,
Although I’m not the one to talk – I hate a man that blows.

“But riding is my special gift, my chiefest, sole delight;
Just ask a wild duck can it swim, a wild cat can it fight.
There’s nothing clothed in hair or hide, or built of flesh or steel,
There’s nothing walks or jumps, or runs, on axle, hoof or wheel,
But what I’ll sit, while hide will hold and girths and straps are tight;
I’ll ride this here two-wheeled concern right straight away at sight.”

‘Twas Mulga Bill, from Eaglehawk, that sought his own abode,
That perched above the Dead Man’s Creek, beside the mountain road.
He turned the cycle down the hill and mounted for the fray,
But ere he’d gone a dozen yards it bolted clean away.
It left the track, and through the trees, just like a silver streak,
It whistled down the awful slope towards the Dead Man’s Creek.

It shaved a stump by half an inch, it dodged a big white-box:
The very wallaroos in fright went scrambling up the rocks,
The wombats hiding in their caves dug deeper underground,
But Mulga Bill, as white as chalk, clung tight to every bound.
It struck a stone and gave a spring that cleared a fallen tree,
It raced beside a precipice as close as close could be;
And then, as Mulga Bill let out one last despairing shriek,
It made a leap of twenty feet into the Dead Man’s Creek.

‘Twas Mulga Bill, from Eaglehawk, that slowly swam ashore:
He said, “I’ve had some narrer shaves and lively rides before;
I’ve rode a wild bull round a yard to win a five-pound bet,
But that was sure the derndest ride that I’ve encountered yet.
I’ll give that two-wheeled outlaw best; it’s shaken all my nerve
To feel it whistle through the air and plunge and buck and swerve.
It’s safe at rest in Dead Man’s Creek – we’ll leave it lying still;
A horse’s back is good enough henceforth for Mulga Bill.”