If ever there was a car that looked like it should be a James Bond car this was it. Not only that but the Aston Martin DB2/4 Mk III was a car that embodied the names Aston Martin and David Brown, and as if that were not enough, under that sleek hood purred an engine whose original design is attributed to W.O. Bentley himself.

An Aston Martin DB with a Bentley/Lagonda DOHC straight six under the hood: what’s not to like?

The story does not end there however. For this car’s owner was none other than Carroll Shelby: the man who would take the modest little British AC Ace sports car and turn it into the fire-breathing Shelby Cobra.

The First of the Aston Martin “DB” Cars

By the end of the Second World War, as we entered into the Cold War era in which the James Bond novels and early movies were set, Aston Martin were in need of rescue and that rescue came in the form of David Brown, who was a manufacturer of tractors and machine tools. In 1947 David Brown Limited bought not only Aston Martin but also the Lagonda business (without its factory) and thus acquired W.O. Bentley’s 2.6 liter DOHC in-line six cylinder engine. So David Brown acquired a significant chunk of the best of Britain’s pre-war performance and luxury car industry. 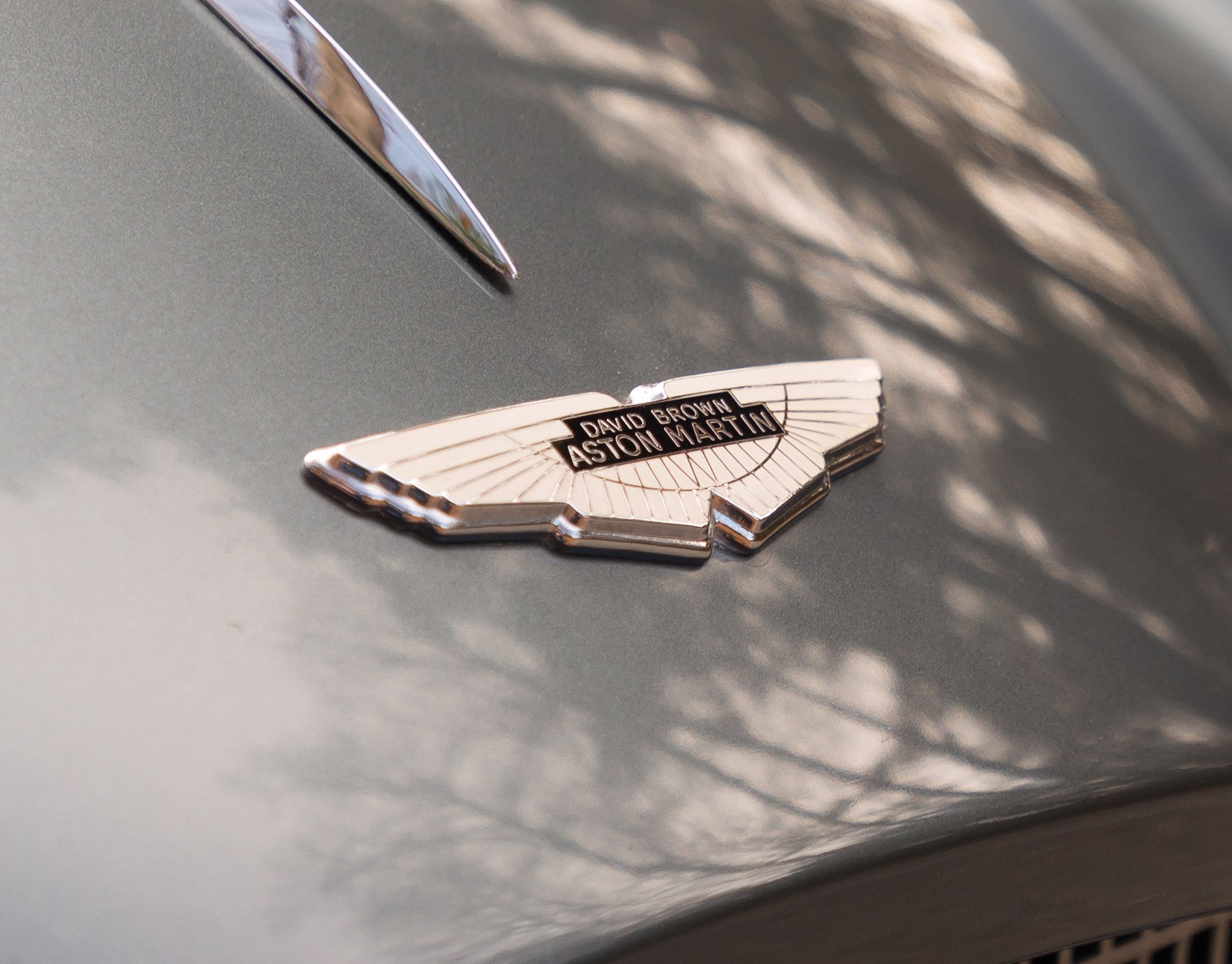 (While that DOHC six cylinder was attributed to W.O. Bentley we should note that Bentley supervised another engineer, William Watson, who did the lion’s share of the design work.)

The first of the new Aston Martin “DB” (i.e. David Brown) cars was the DB2 which made its debut as a racing car for the 1949 24 Hours Le Mans. Of the three cars fielded one was fitted with the DOHC 2.6 liter Lagonda straight six while the other two were fitted with pre-war Aston Martin four cylinder OHV push-rod engines. For the 1949 Le Mans the six cylinder car had to retire because of a failed water pump but was back on the track for the Spa 24 Hour and finished a creditable third.

The DB2 production road cars went into production the following year, 1950, while Aston Martin continued to campaign them on the race track with varying degrees of success including a third place in the 1951 Le Mans. The DB2 was premiered at the April, 1950 New York Motor Show. The DB2 was replaced in April 1953 with the Aston Martin DB2/4.

The first of the Aston Martin DB2/4 models made its debut at the 1953 London Motor Show. It was called the DB2/4 because instead of only being a two seater it offered a 2+2 option so it could seat four people, although in a 2+2 it works best if the rear seat passengers are children as the room is compact at best. This car’s engine was still the 2.6 liter (2,580 cc) of the original Bentley/Watson design and its power had been increased to 125 hp, something that had been regarded as “Vantage” tune in the previous model. Things were to get better however and 1954 saw the engine capacity increased to 2.9 liters (2,922 cc) and power increased to 140 hp. This of course migrated the car’s top speed upwards and it became capable of a genuine 120 mph, ensuring it was at least as fast as a Jaguar XK120 was advertised to be. 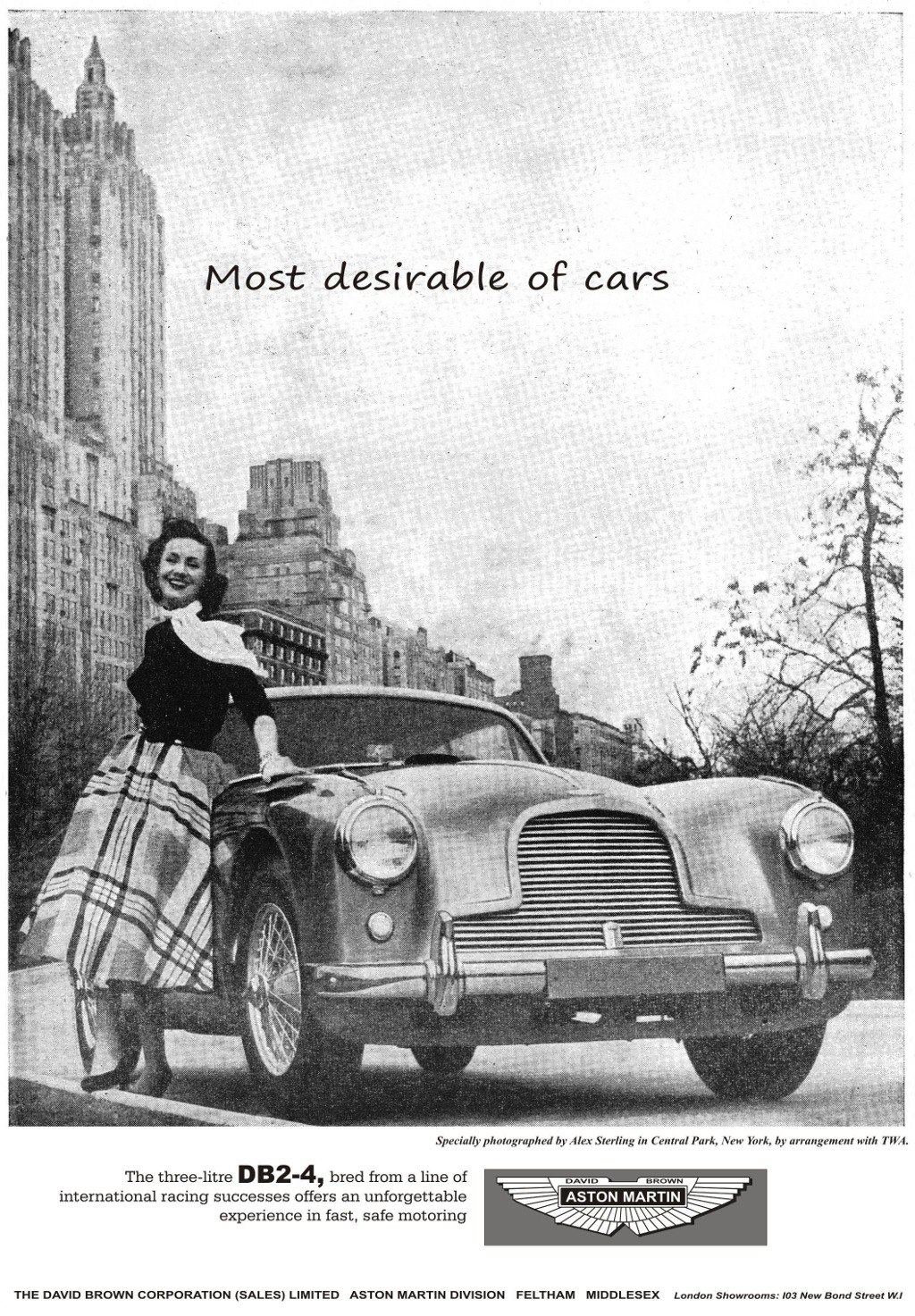 When it first appeared in its Mark I version the DB2/4 looked very much like its DB2 predecessor and it was in fact an improved DB2. The DB2/4 in its first iteration was offered in three body styles; a 2+2 hatchback (one of the first, if not the first use of this style of rear door by anyone), a drophead coupé, and a two seater fixed head coupé. 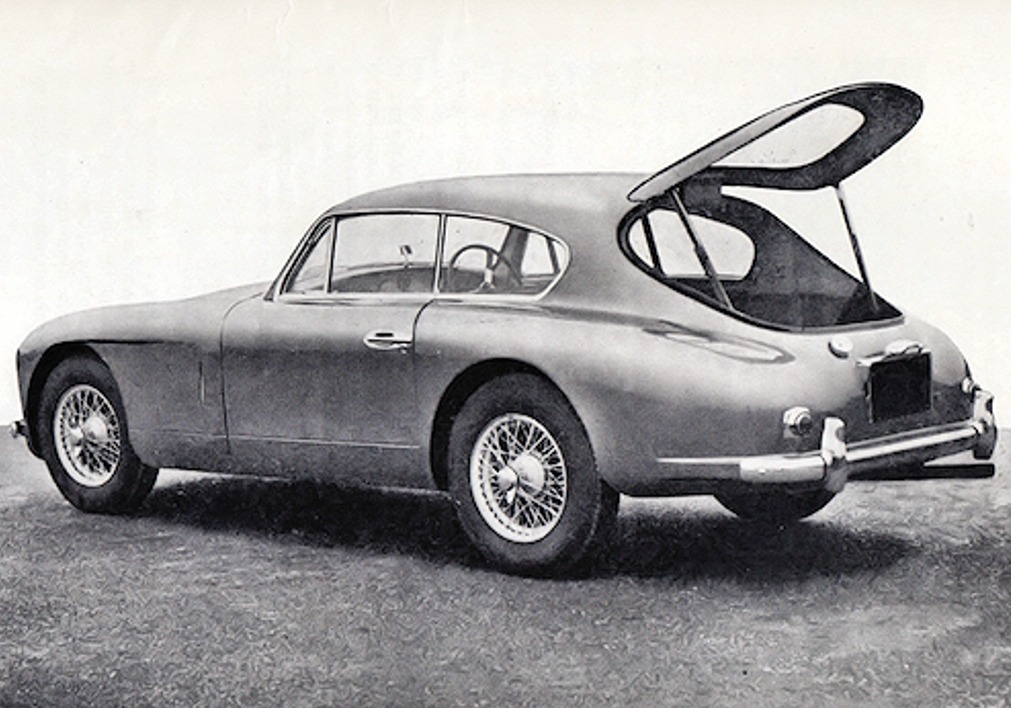 The DB2/4 would go on to be made in Mark I, Mark II and Mark III versions. The Mark II first appeared in 1955 and boasted an optional “high compression” (i.e. 8.6:1) version of the engine delivering 165 hp. This model had some styling tweaks but still very much looked like the DB2, the most obvious difference between the DB2 and the DB2/4 models being the one-piece windscreen of the later models and the switch from the old style trafficators to flashing indicators.

It would be the Mark III that would depart from that and set the styling that would be the model for the DB4, James Bond’s DB5 which he would use in the movie “Goldfinger“, and the DB models that came after.

The DB2/4 Mark III was given a completely new grille style, a style that blended into the hood line giving the car a purposeful exotic look, like something that Zagato might have created. 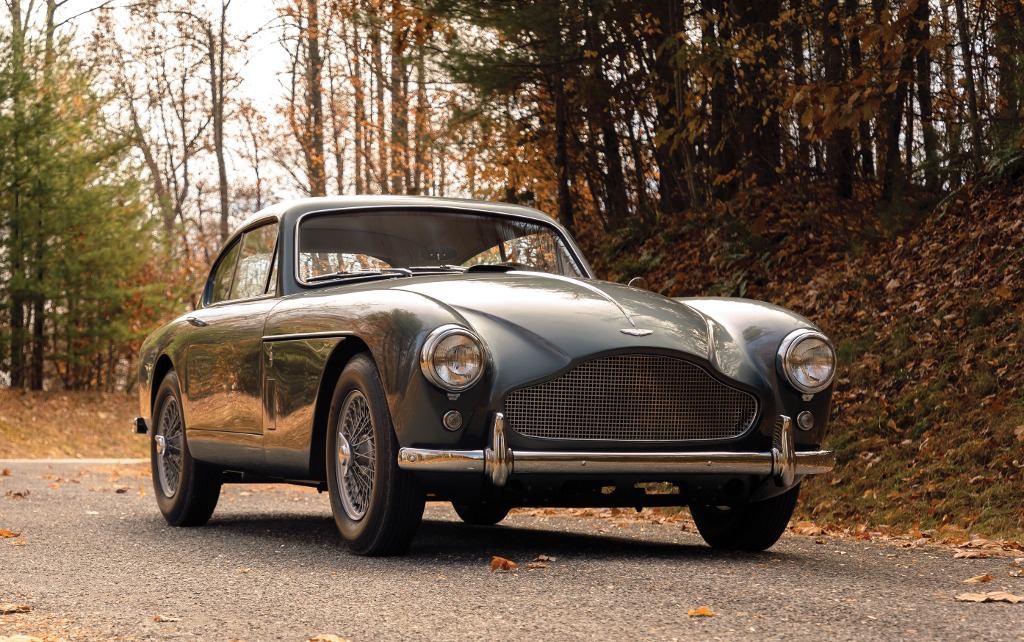 The DB2/4 Mark III made its debut at the Geneva Motor Show of 1957 and it certainly looked like a new model. Not only was the body styling startlingly different but underneath that svelte body skin there lurked a much improved engine. 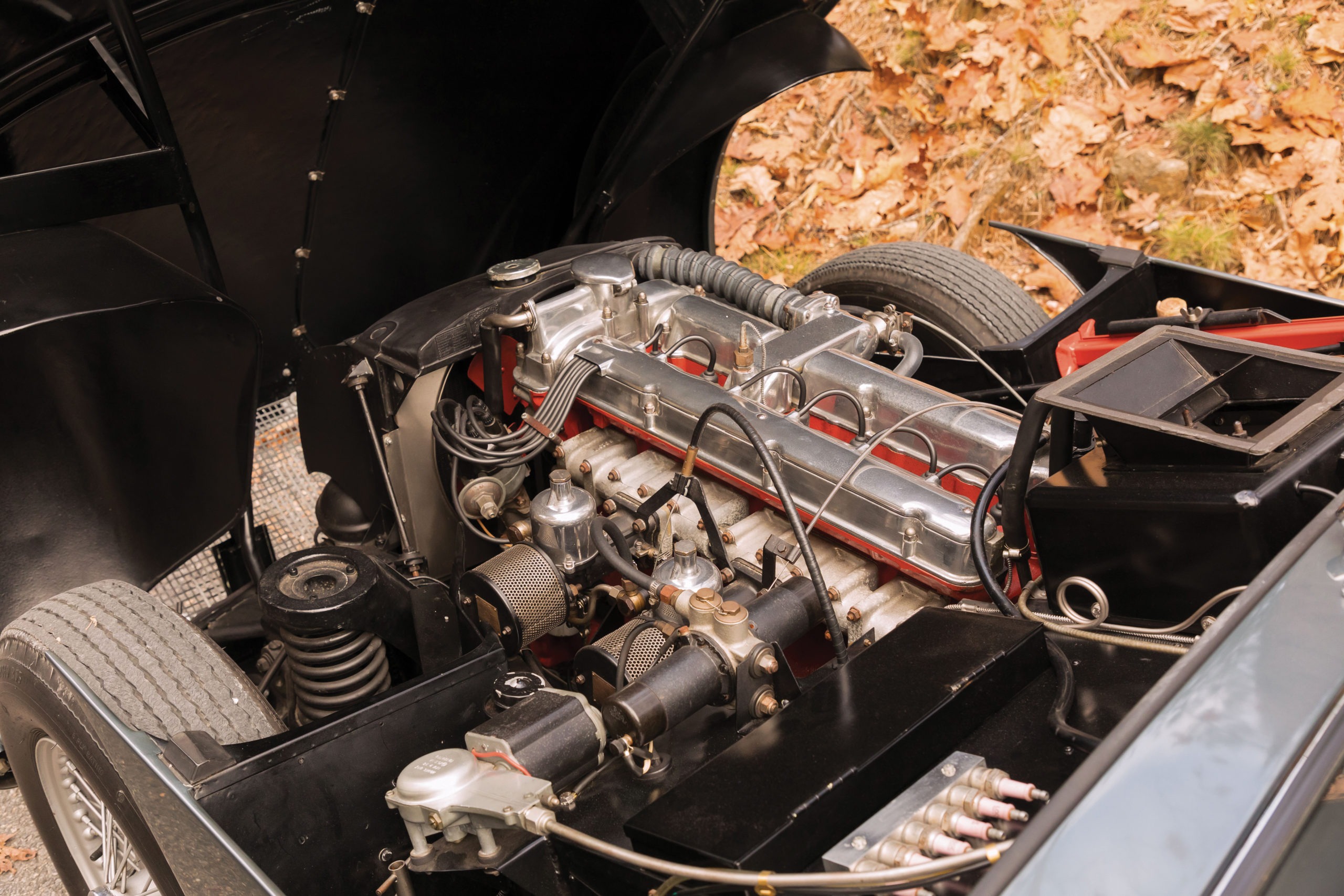 Aston Martin had recruited a new engineer named Tadek Marek and he had set to work on the W.O. Bentley/William Watson DOHC six to make it something even more extraordinary. The engine’s crankcase was stiffened, the crankshaft strengthened, and the valves enlarged. The capacity remained at 2.9 liters and the power 162 hp in for the standard 2.9 liter, and 178 hp if fitted with optional dual exhausts.

There were a few engine options for the new car. Notable was the DBB engine option which was fitted with three twin-choke Weber 35 DCO 3 carburetors, long duration camshafts, along with the 8.6:1 compression ratio and twin exhausts: this delivered 195 hp. In addition to this for those who preferred their carburation to be classic Skinners Union a customer could order his/her high performance engine with triple SU 1¾” carburetors and the engine would deliver 180 hp. 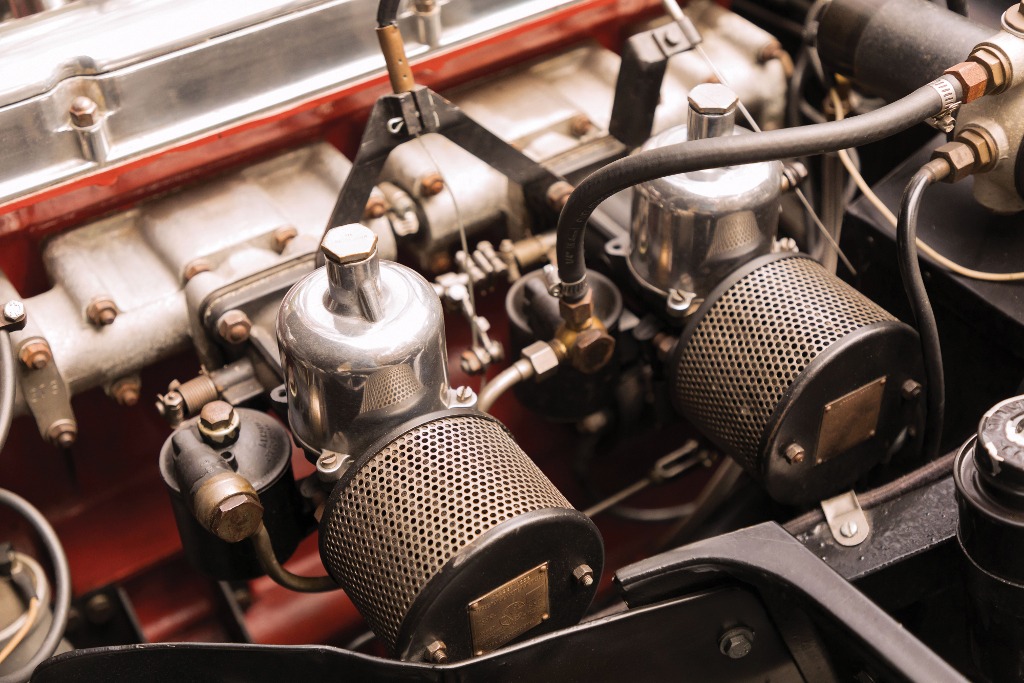 With that extra engine power it was also decided to offer the buyer the option for the then new disc brakes. Girling disc brakes were optional for the first 100 DB2/4 Mark III cars produced and then became a standard fitting.

The Car that Fathered the 007 Aston Martin DB5 Movie Car

If you have read Ian Fleming’s 007 novel “Goldfinger” and you are a car enthusiast you will remember that in the book James Bond drives an “Aston Martin Mark III”, which was a less complicated way of saying “Aston Martin DB2/4 Mark III”. So the DB2/4 Mark III is the original James Bond car and for the movie the decision was made to use the then current model, which was the DB5. 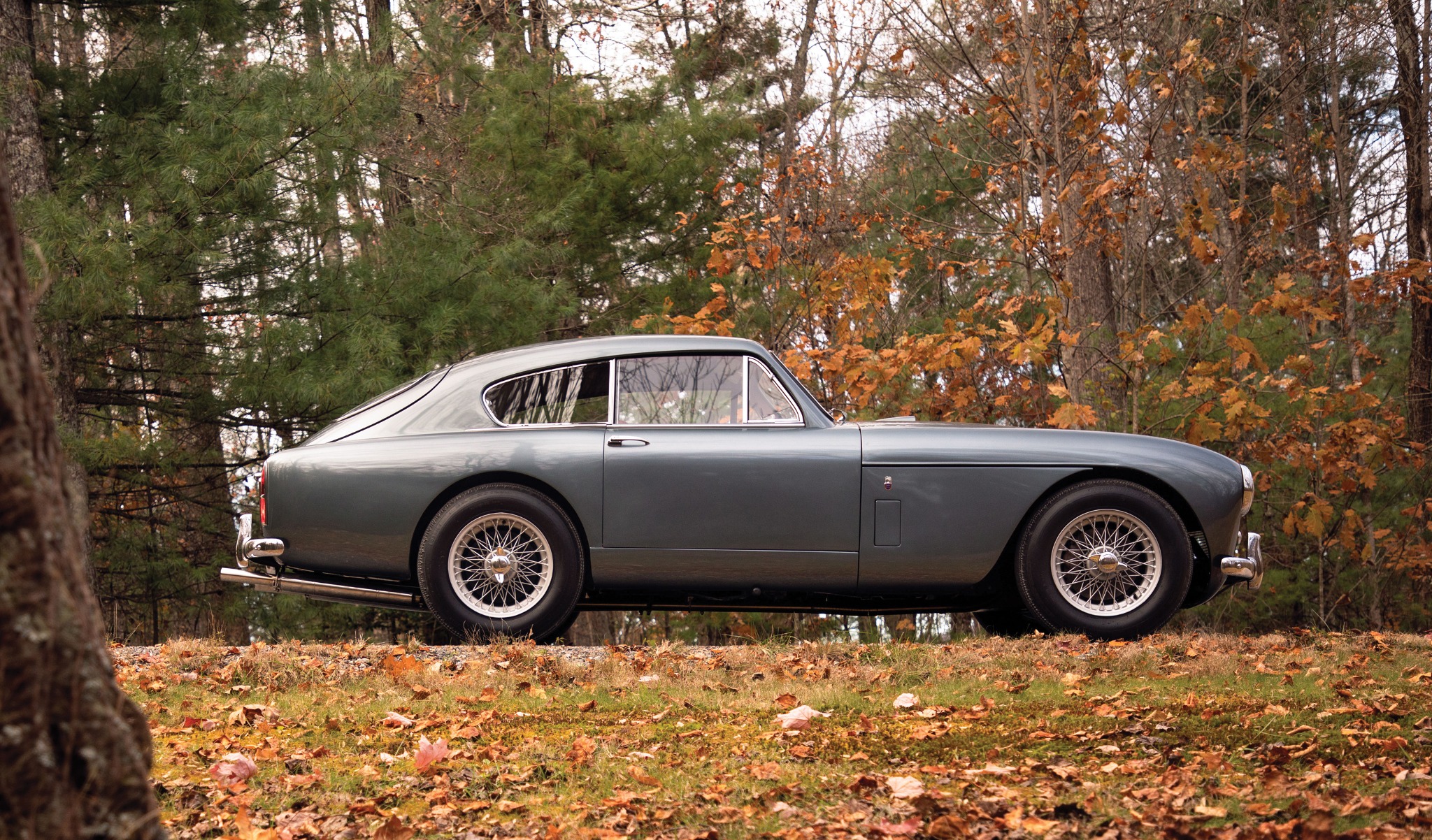 By comparison with the DB5 the DB2/4 Mark III has a beautifully non-pretty look about it. It looks businesslike, it looks like a car that should have twin Browning .30 caliber machine guns mounted behind the front indicators. The DB5, gorgeous as it is, has the same delightfully pretty look as the DB4, but I think the DB2/4 Mark III looks more like a car a British secret agent would drive up to Checkpoint Charlie in, with his trusty Walther PPK in his shoulder holster and the built-in Browning .30 caliber machine guns cocked and locked. 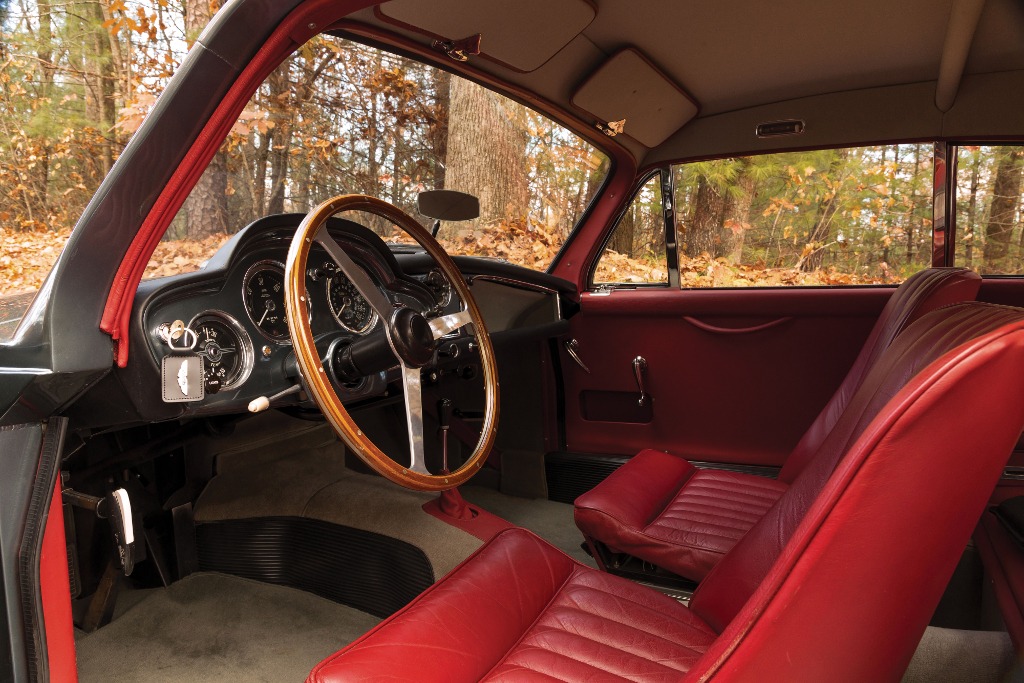 The 1958 Aston Martin DB2/4 Mark III in our pictures was originally a factory demonstration car and was sold to Carroll Shelby in 1958. Shelby was at that time driving for the David Brown Racing Team and records show he purchased the car for $3,500 and had a new engine installed. The car had been originally built left hand drive and after his successful racing season which included a Le Mans victory he took the car back to Texas. 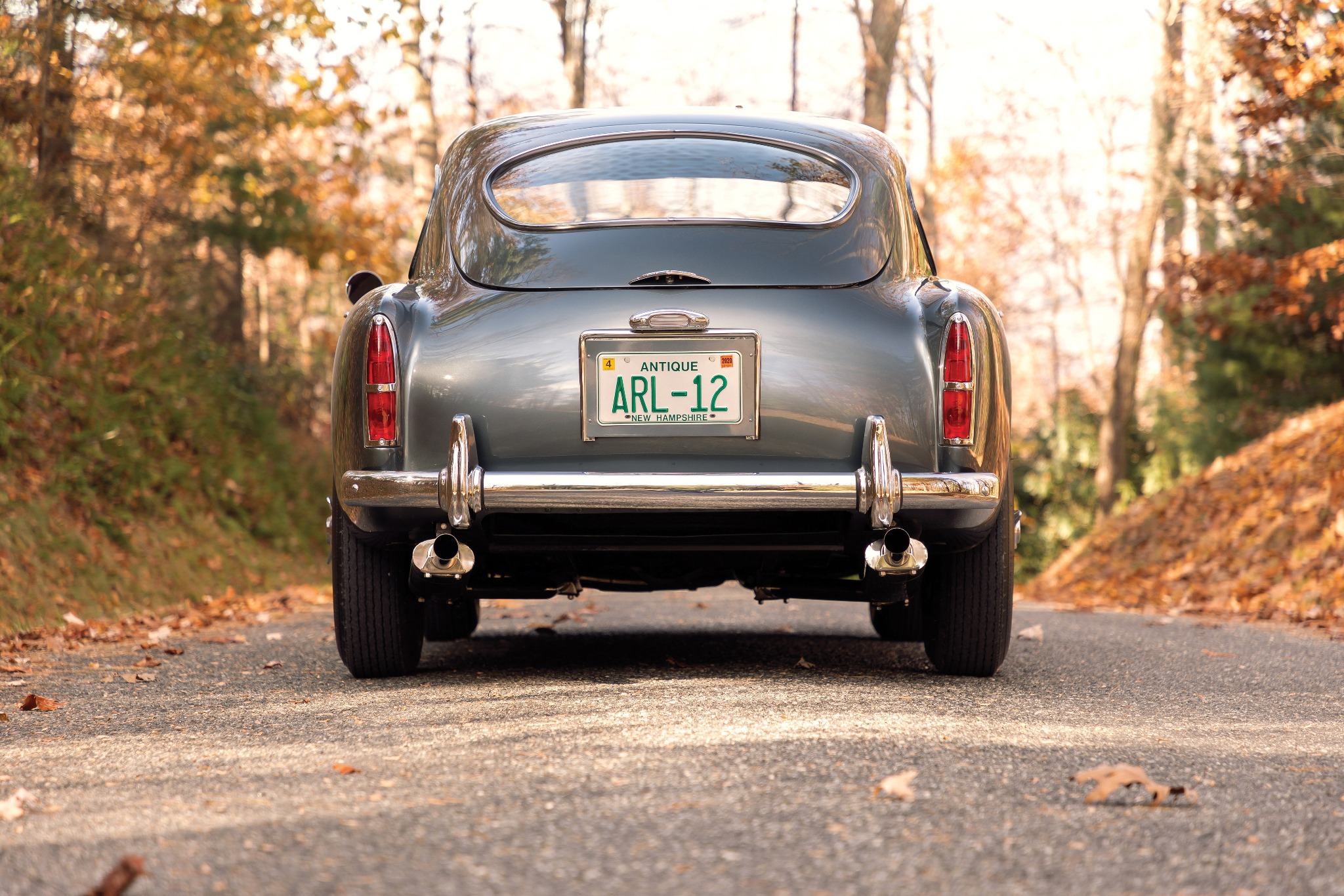 Shelby sold the car and it was discovered in the 1990’s by actor Ed Herrman who purchased it and set about having it comprehensively restored, that work being completed in 1999.

Having won several awards at concours events this car is now coming up for sale by RM Sotheby’s at their Amelia Island auction to be held over March 6-7, 2020.

This is a very desirable automobile, in part because of its history and the famous names associated with it from its design, manufacture and ownership, but also because the Aston Martin DB2/4 Mark III has a character that sets it apart from its Aston Martin siblings: a character that Ian Fleming saw when he decided that this should be the car for 007 in “Goldfinger”.