Introduced ten years after the original Series I Jaguar E-Type made its debut at the Geneva Motor Salon the Jaguar E-Type Series III was a development of the original classic car but with changes that were in part desirable, such as the new all alloy V12 engine, and in part imposed by government regulation. Jaguar weathered the challenges of keeping ahead of an ever more demanding marketplace, and keeping up with the ever increasing demands of government regulators and built the Series III car as one that stayed as faithful as possible to the original classic design. In doing so they created a car that was arguably as beautiful as its forebears but with a more purposeful style, better handling, more stable at very high speeds, and a car that possessed an enormous potential for an owner to tweak it up into a subtle embodiment of raw power that growls like the big cat it is. For an example of the sort of tweaking that the Series III E-Type lends itself to watch the following drive video (courtesy Pat Harmon) and have a look at the power and modifications listed at the end.

The stock standard E-Type Series III V12 sounds beautiful and smooth but the above video provides a glimpse of what can be had if desired. The decision to create a V12 was made to ensure the Jaguar cars being exported to the United States were technically advanced and competitive with the V8 engines that were so common in the States. By creating a V12 the Jaguar E-Type Series III enjoyed all the benefits of having an engine with near perfect balance and smooth, even delivery of power and torque. The development of the engine was entrusted to Walter Hassan (who had been instrumental in the creation of the V12’s predecessor the XK engine) and Harry Mundy . In the video below Walter Hassan and Harry Mundy explain their design decisions in the creation of the Jaguar V12. (Courtesy King Rose Archives).

The new V12 engine was fitted with Lucas transistorized ignition and in original tune produced 272hp breathing through four Zenith carburettors. Later production cars had this reduced to just over 250hp as the emissions control rules required. With the aluminum V12 under her hood the Series III was capable of better acceleration than her predecessors being able to accelerate to 100mph in 16seconds. Standing to 60mph was accomplished in less than seven seconds, Top speed was 135mph with the standard textile radial tires fitted and 8mph faster at 143mph with optional steel belted radial tires. Many owners modified their cars to improve on these performance figures as we have already seen in the first video.

The Series III Jaguar E-Type was only made in the roadster and 2+2 couple versions. the shorter wheelbase two seater hard top was dropped simply because the 2+2 was so much more popular and eliminating the model made production of the Series III easier. The Series III cars needed some styling changes in order to accommodate the V12 engine. the most noticeable of these was the enlarging of the front air intake and provision of an additional air scoop underneath it. These changes altered the look of the car but were necessary to provide the needed cooling for the new larger engine.

The new V12 had a number of other practical improvements to go with its new look. The front disc brakes were upgraded to ventilated type and the suspension was made anti-dive. Power steering by Adwest was fitted as standard and an automatic transmission was available as an option. The track was increased necessitating flared wheel arches giving the car an even more stable and sporting look whilst at the rear the car was fitted with a quadruple exhaust through which to play its V12 engine music.

The interior of the Series III E-Type was wisely kept visually the same as on the previous models with large tachometer and speedometer immediately in front of the driver and with the four other gauges arranged in a neat line at the center of the dashboard with a row of rocker switches underneath them.

The Series III E-Type had become a touring sports car in the Grand Touring style and is a more comfortable and more capable car than the models that preceded it despite its more aggressive and slightly less classic looks.

The 1973 Jaguar E-Type Series III in our pictures is coming up for sale by Bonhams at their Spa Classic Sale to be held at Le circuit de Spa Francorchamps, Route de Circuit, 55, 4970 Francorchamps on 21st May 2017.

You will find the sale page for this car with full details if you click here.

This Jaguar is a two owner car with 43,700 miles on the tachometer and is in excellent condition. The car is fitted with air conditioning and a stainless steel exhaust system. It certainly looks to be a prime example of the model. 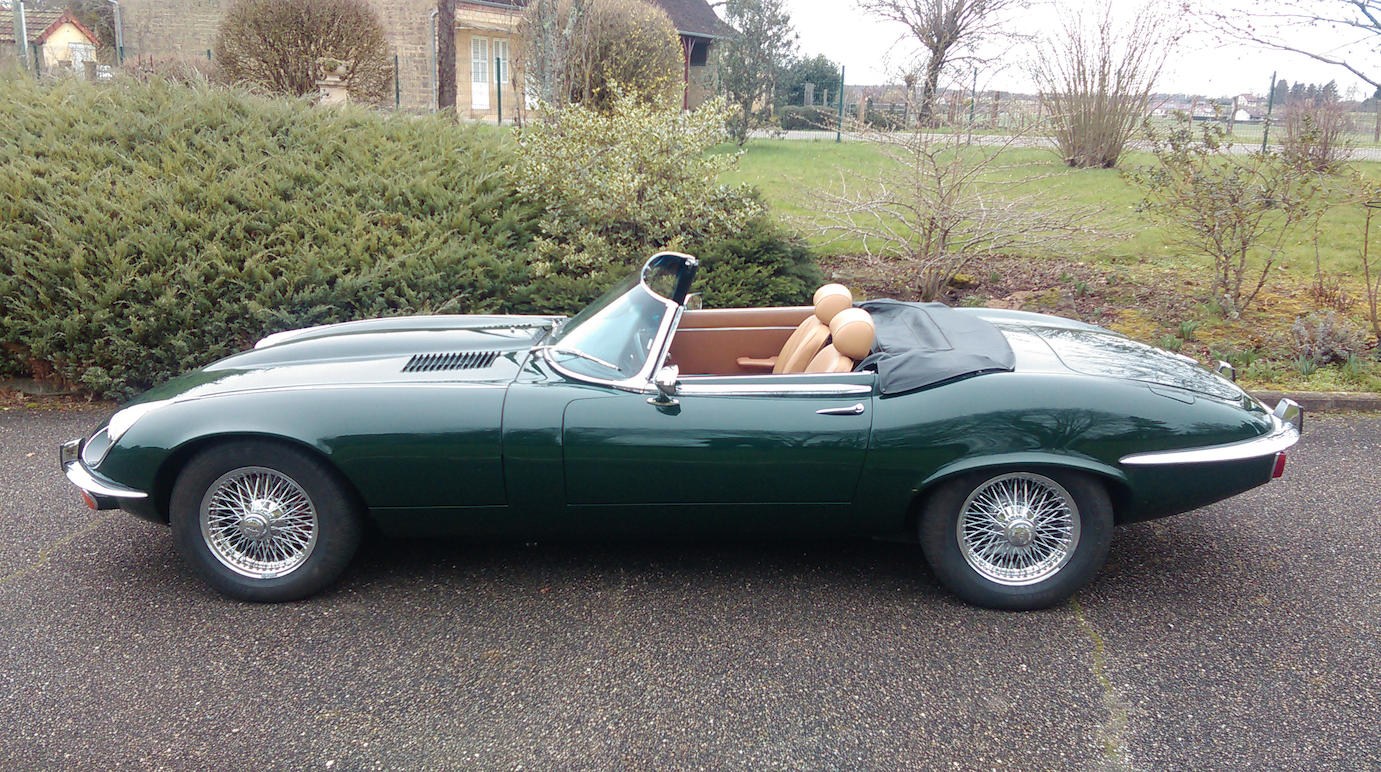