Its the Lear Jet you have when you don’t have a pilot’s license, but you do have a truck license, and you are really passionate about audio-visual entertainment. The Limo-Jet doesn’t just look like a Lear Jet, it was made from one and took in the order of 40,000 man hours to transform it into the unique creation it now is. 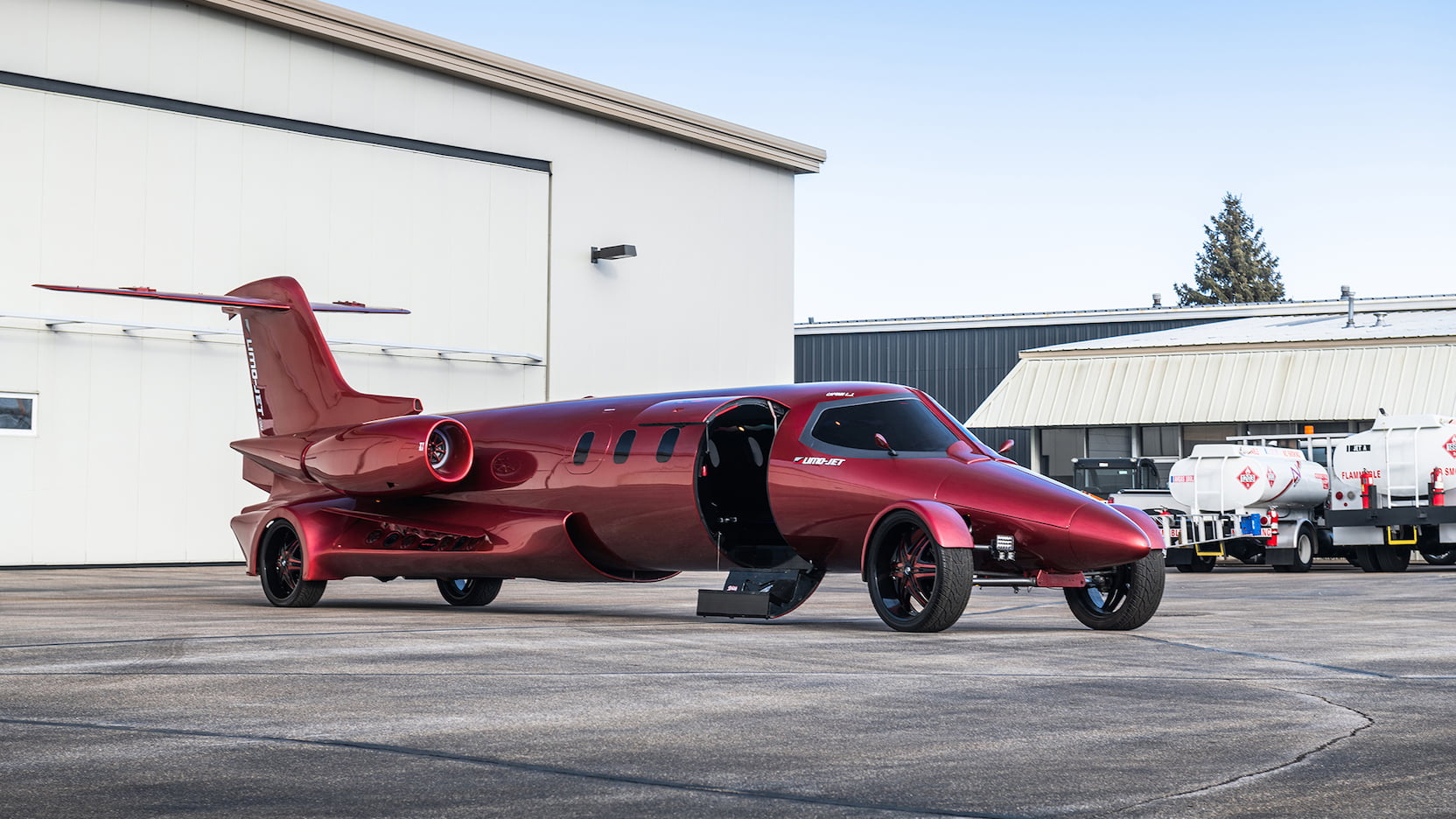 The Limo-Jet was the brainchild of Dan Harris of Bend, Oregon and involved input from about a hundred people including Frank DeAngelo who became one of the leaders of the project. The work began on transforming the Lear Jet into a Limo-Jet with the creation of a new steel steel skeleton frame and chassis, necessary because the aluminum Lear Jet fuselage was never designed to be turned into a limousine and so it had to have a steel frame engineered into it. That alone was a two year process of research, design and construction. 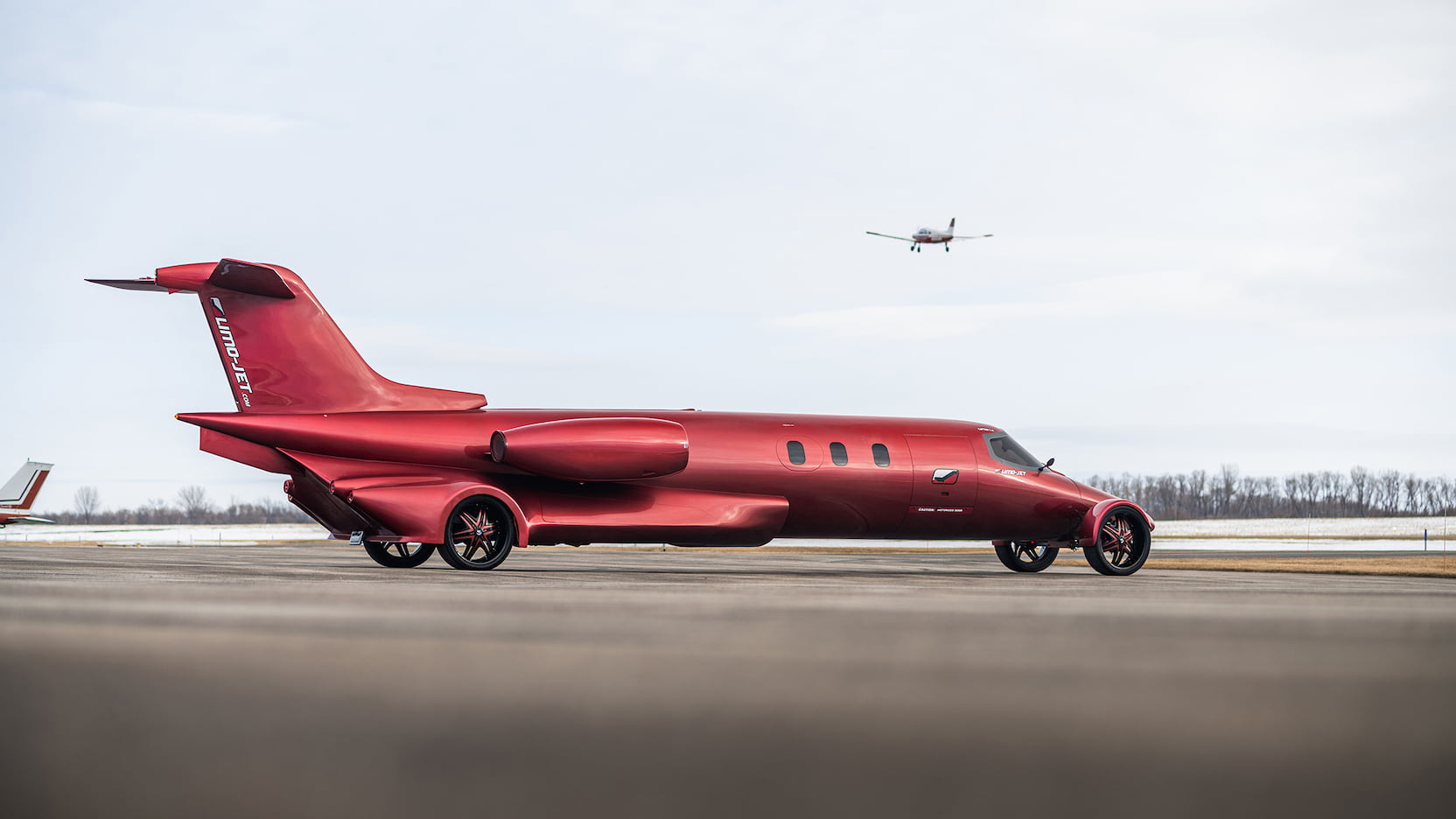 The actual creation of the Limo-Jet would take an additional decade to arrive at completion, with the build being managed by Chicago-based Exotic Coach. The suspension, integrated into the chassis design, required the involvement of companies involved in racing car suspension, people who had the out-of-the-box technical know-how and creativity to invent the best system for the task while keeping it light and aircraft-like high-tech to suit the character of the vehicle being created. 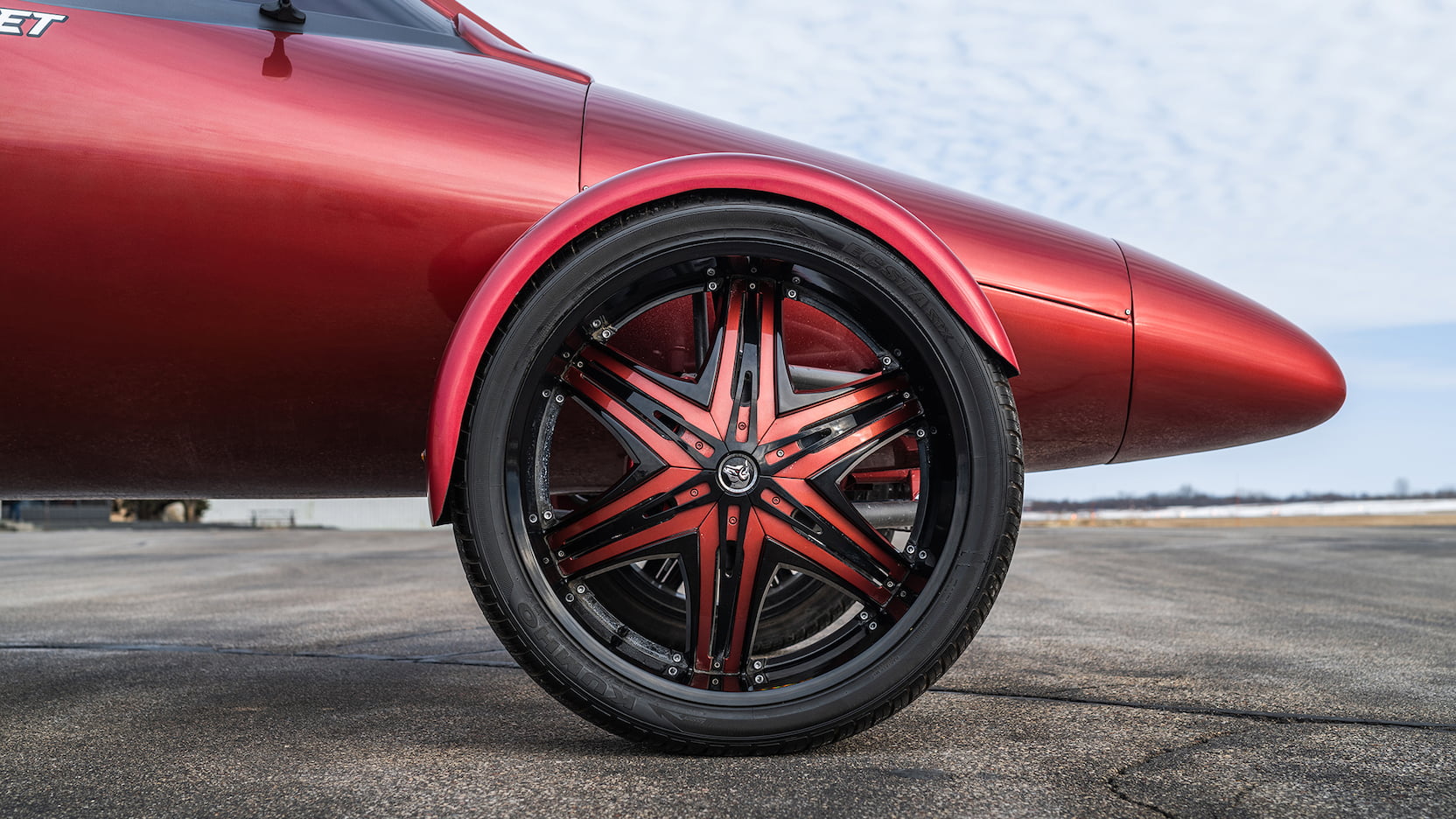 The wheels are custom 28″ red and black Diablo with Kumho 325/25R28 tires and the braking system is purpose designed and hydroboosted.

Into that new chassis was installed a 400 hp 8.1 liter Chevrolet Vortec V-8 truck engine and drive-train mounted in the rear along with the vehicle’s computer systems. 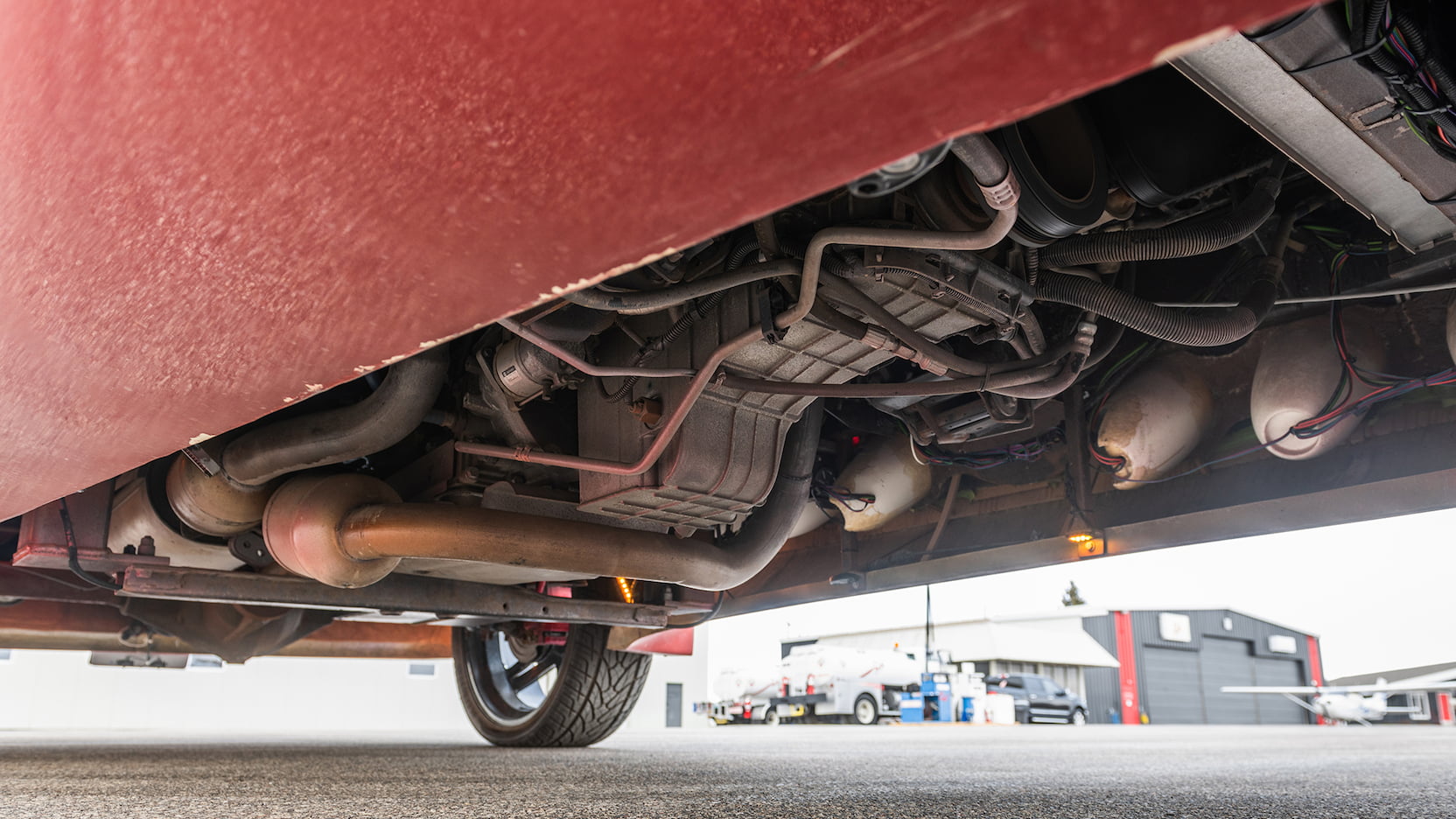 The Limo-Jet provides a high-tech experience for the driver who sits in a deep bucket seat surrounded by four screens to help see the corners of this long vehicle while overhead is a control center for the sophisticated on-board entertainment systems. 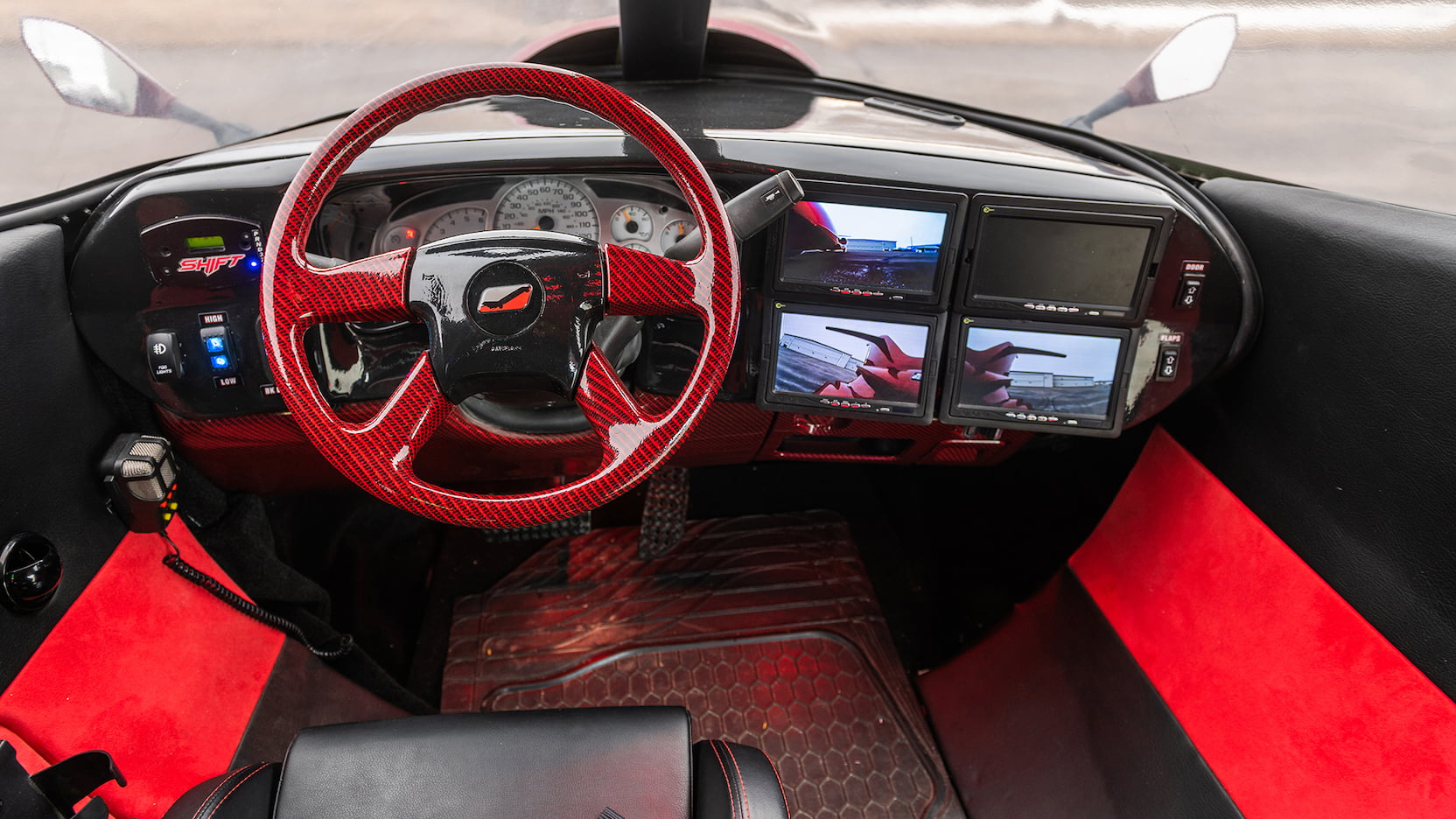 For Dan Harris and Frank DeAnglelo the Limo-Jet was not just to be created as a means of stylish transportation, although it would have been magnificent as that: but instead they sought to create it as a mobile entertainment center, something that would have commercial viability. So in the overhead panel in the driver’s cockpit are the controls for the Showtime Audio 17,000-watt audio/visual system. 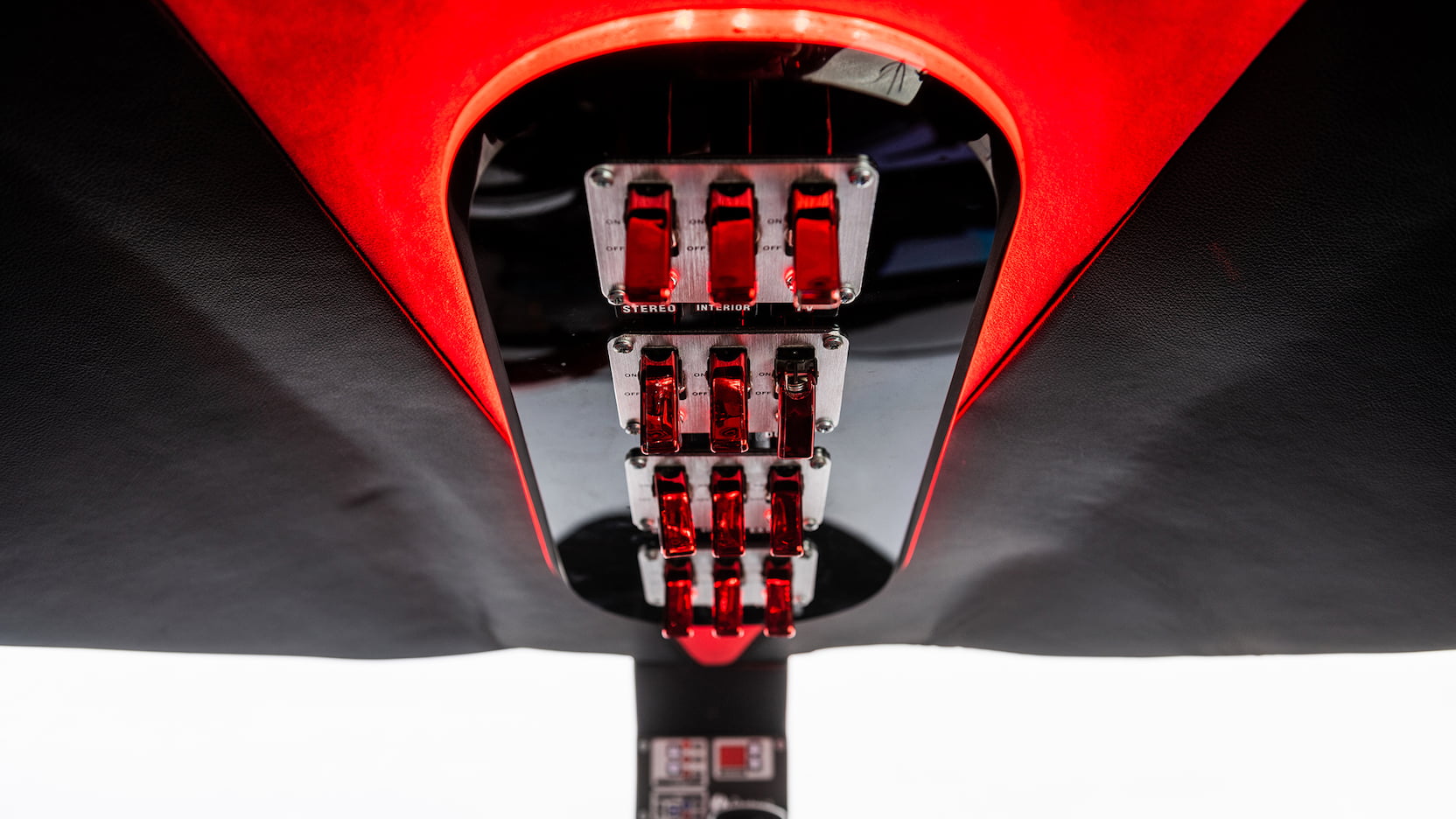 The Limo-Jet’s passenger entertainment systems include a 42″ plasma screen and a sound system that guarantees a real “surround sound” experience. 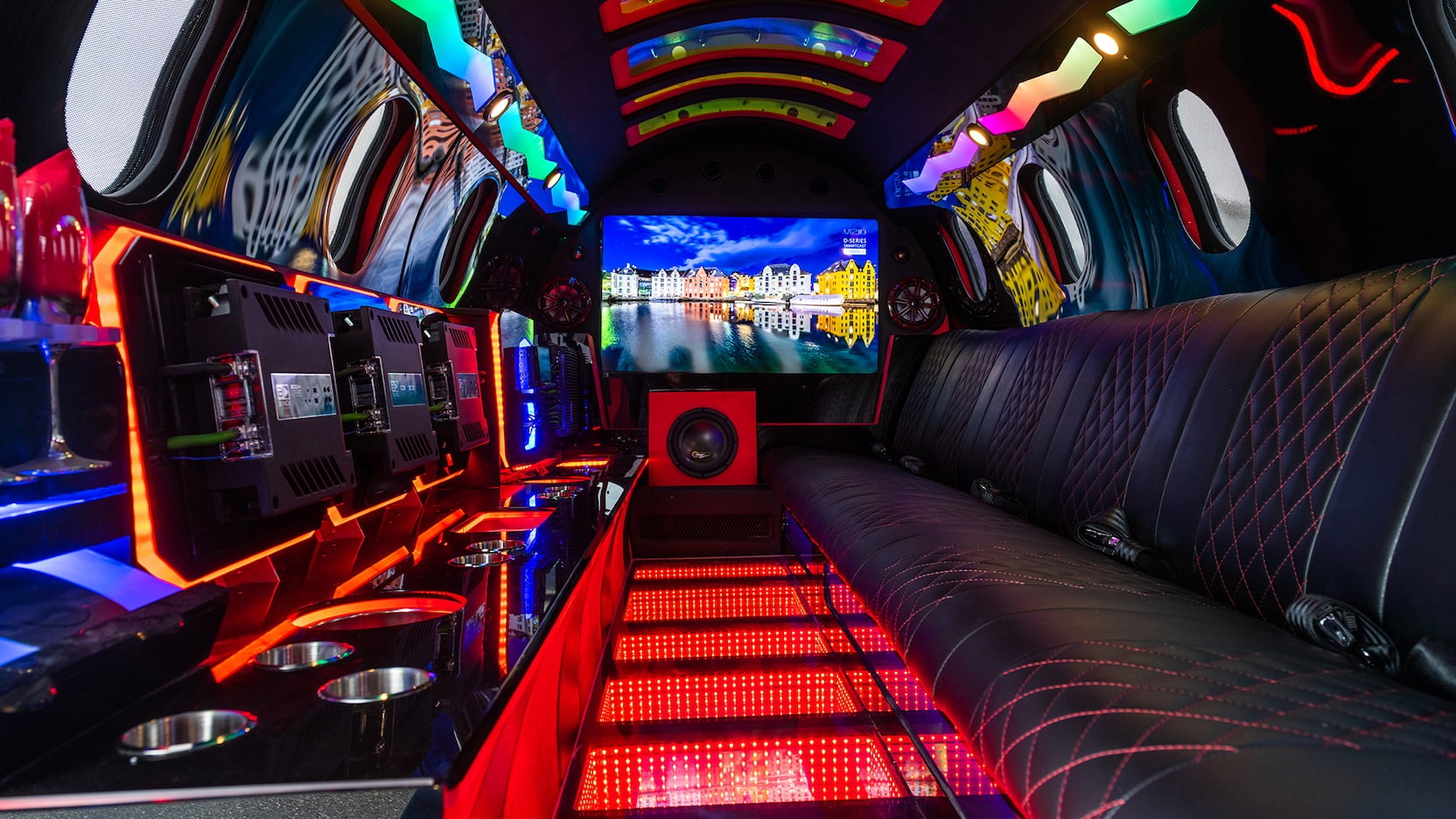 As can be seen in the photographs the interior has provision for refreshments and has a feature floor to add depth to the interior along with a feature lighting system. 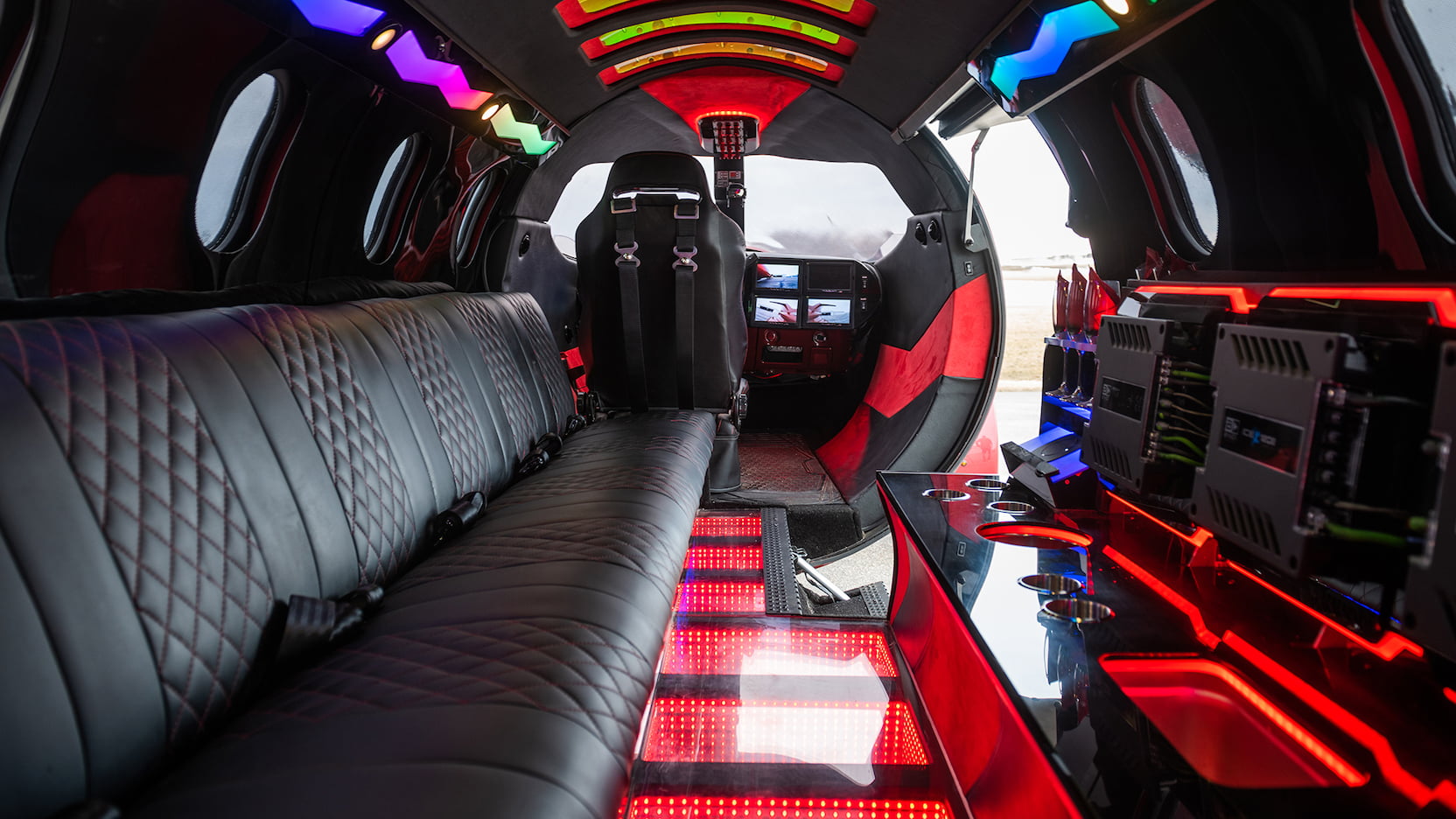 As can be appreciated from the photographs the Limo-Jet is a long, wide and tall vehicle. The length is 42′, width is 8′, height is 11.6′, and the Limo-Jet tips the scales at 12,000 lb. The vehicle is “street legal” and is provided with folding tail wings to help it be more maneuverable if driven on public roads.

It is not necessary to actually drive the Limo-Jet on public roads to transport it from place to place as it is provided with a 2015 Chevrolet 2500 Pickup mated to a 2017 Iron Pull 44-foot trailer so it can be transported safely without difficulty. 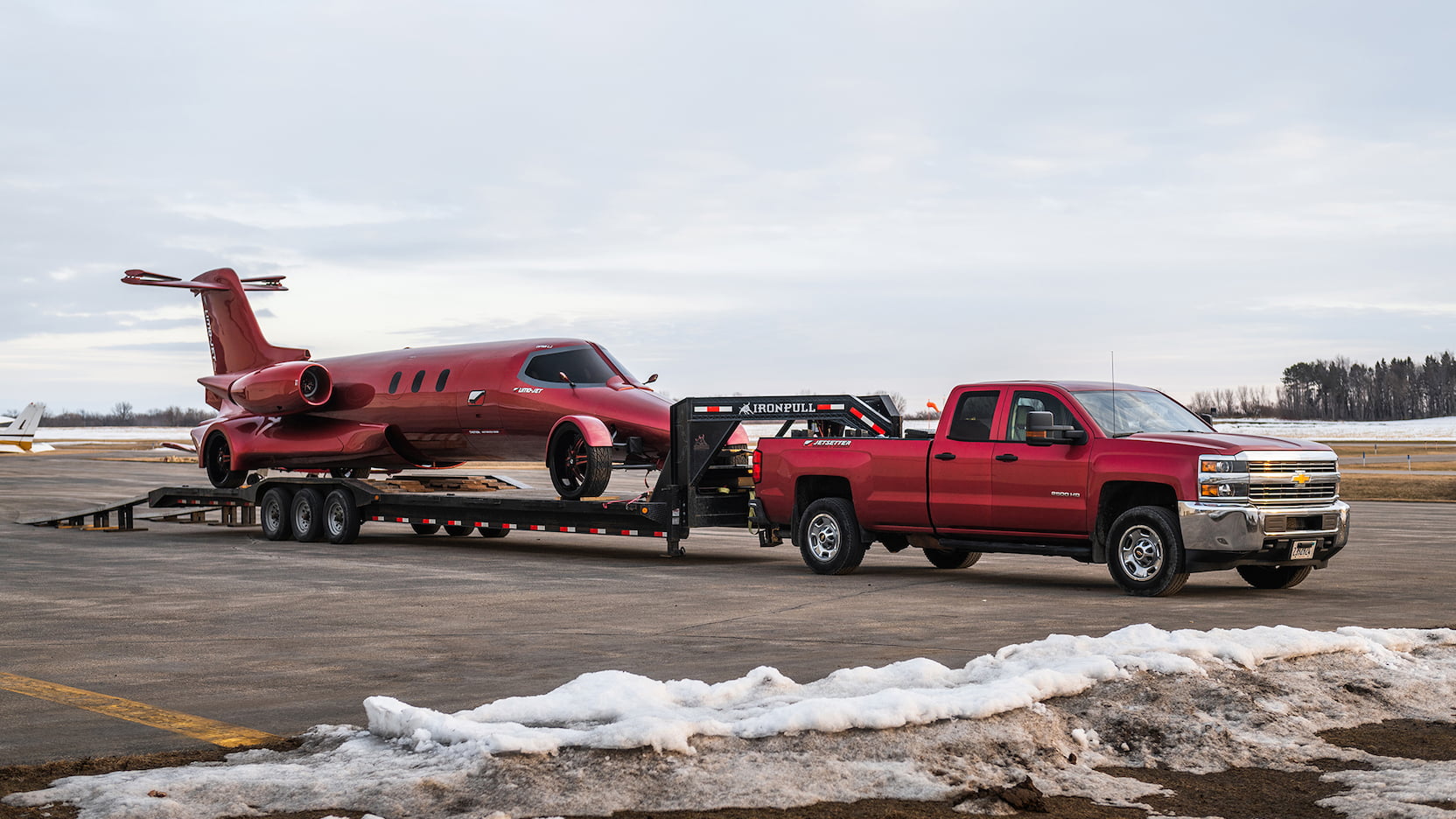 The good news for those with a stash of cash just looking for something really unique to spend it on is that this Limo-Jet is coming up for sale this year by Mecum Auctions.

You will find the sale page for the Limo-Jet if you click here. 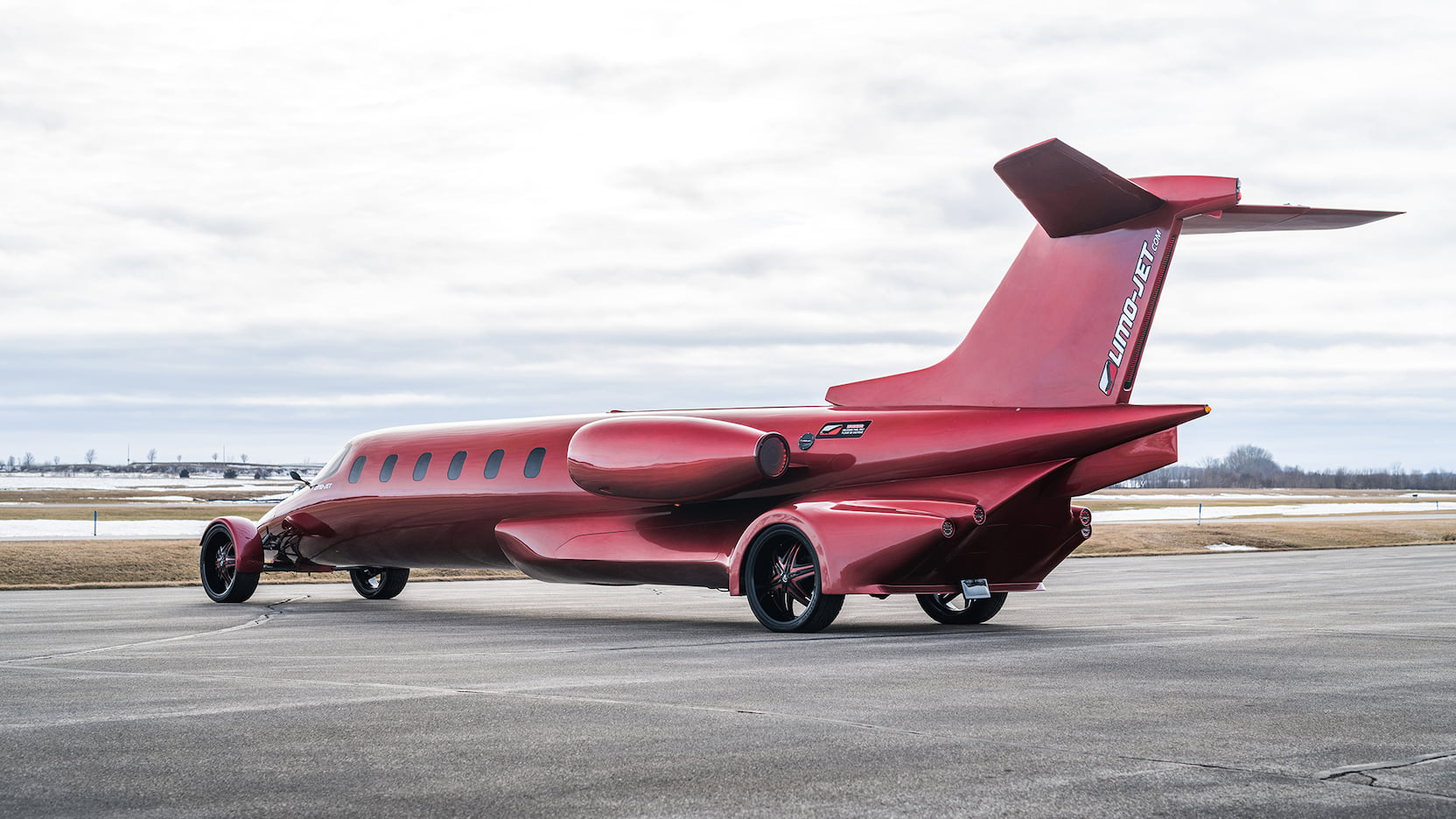 The Limo-Jet is a unique mix of “Lear Jet” novelty stretch limo and mobile entertainment system. It’s a tribute to some out of the box thinking, and quite sophisticated engineering.

Back when the idea was first conceived no doubt the people behind it asked themselves the question “is it possible?”: then they went ahead and made it possible. 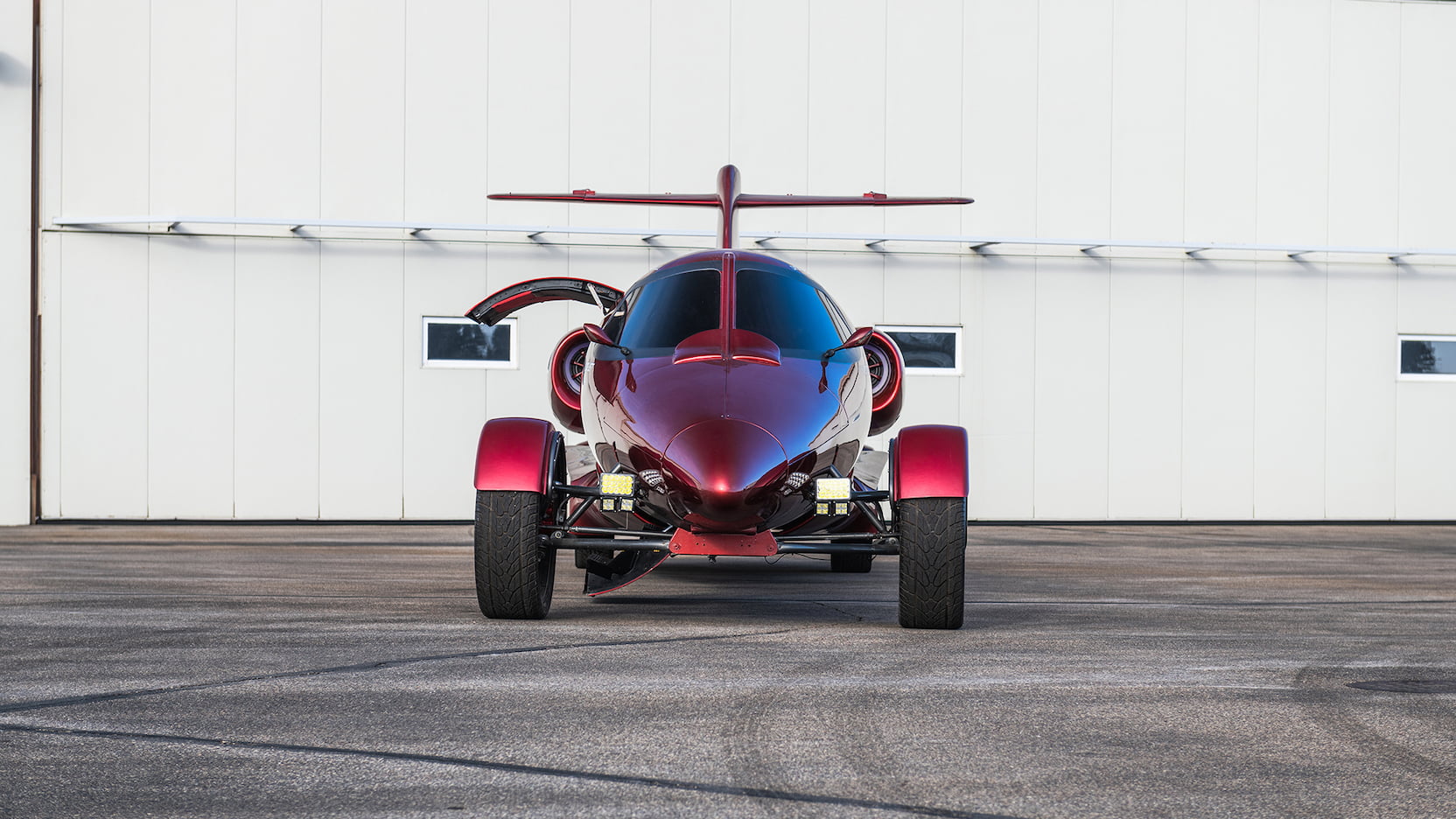 Picture Credits: All pictures of the Limo-Jet courtesy Mecum Auctions.