The Rocket Ball and Volition Rifle

The quest that would lead to the development of the lever action rifle began with a man from New York named Walter Hunt who reasoned that before he could design a practical repeating rifle he needed to create a self contained cartridge that it could do its repeating with. Walter Hunt’s thinking was of course influenced by the muzzle-loading rifle technology in common use at that time and so in 1848 when he introduced his new “Rocket Ball” self-contained ammunition he effectively designed it to be like a muzzle-loaded Minie Ball conical bullet with its hollow base filled with gunpowder that was held in place by a base that had a hole in it covered with a combustible material that could be ignited by the flash from a percussion cap.

The Hunt Volition rifle featured a tube magazine under the barrel which held a dozen Rocket Ball cartridges. This rifle featured a very early lever action system. Priming had to be done manually.

Once he had his Rocket Ball cartridge invented and patented Walter Hunt then created his “Volition” rifle to fire it. the Volition rifle featured a tubular magazine mounted under the barrel and it used a lever action mechanism to load fresh cartridges into the breech. What the Volition rifle did not have was a repeating priming system, the percussion cap had to be manually fitted by the shooter for each shot just as one would do with a muzzle-loading percussion rifle. So Hunt’s Volition rifle was a step towards a practical repeating rifle but the design still had need of significant improvement.

Lewis Jennings worked on improving Hunt’s Volition rifle in order to automate the priming system to make it a true repeating rifle. He was joined in this quest by Horace Smith who would later go on to be one of the founders of Smith & Wesson. Jennings and Smith were at that time working for the Robbins & Lawrence Company and were joined in their efforts by another legend of American gun invention, Benjamin Tyler Henry, who was at that time working for Robbins & Lawrence as a shop foreman. 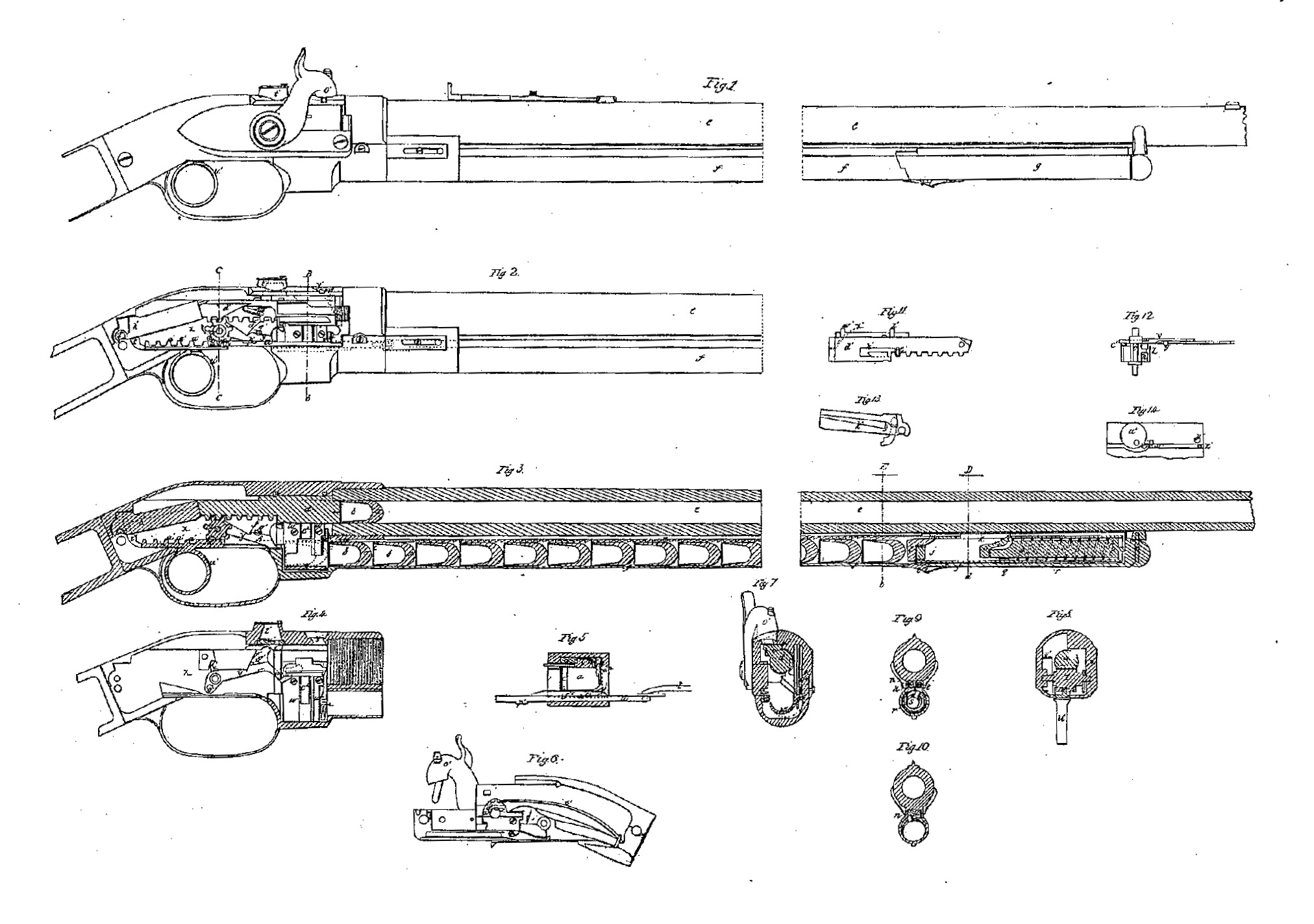 Patent drawing for the Jennings rifle. This rifle has two magazines; one for the “Rocket Ball” cartridges which did not incorporate a primer, and in the top of the action a magazine for the primers. As the lever was cycled a fresh cartridge from the under-barrel tubular magazine would be chambered and simultaneously a priming cap would be fed to the ignition hole in the top of the breech.

Smith and Jennings managed to create a working primer feed for Hunt’s Volition and through a number of improved versions it became known as the Smith-Jennings rifle. America’s iconic lever action rifle was a project in the making but it hadn’t quite emerged yet however.

Daniel Wesson also joined the Robbins & Lawrence Company in 1850 and between these three inventive minds work on solving the problems in the design of Hunt’s Rocket Ball and Volition ideas was underway.

The “Base Fire” Cartridge

The following year, 1851, the Robbins & Lawrence Company decided to send Horace Smith to the British Great Exhibition held in London’s Crystal Palace at modern day Hyde Park. At the exhibition Smith was able to spend some time with Louis Flobert who had invented a rimfire cartridge and it would subsequently be the rimfire cartridge design that would be the first truly practical self contained metallic cartridge that would be used successfully in lever action rifles.

On his return to the United States Horace Smith and Daniel Wesson created a design for a new self contained metallic cartridge that was sufficiently different from Flobert’s rimfire that they would not fall foul of his patents. They used the idea of having the base of the cartridge filled with priming compound but instead of having that priming compound in the rim of the cartridge case where it would be impacted and effectively squashed by the firing pin to cause ignition they found a different way to sandwich it.

Smith and Wesson’s “base fire” design had the priming compound sandwiched between two discs of metal so that a firing pin strike on the base would cause it to ignite.

Smith and Wesson patented their designs for the cartridge and lever action rifle to fire it in 1854 and the first prototype examples of these cartridges were hand made. It was found that no-one had the technology at that time to mass produce cartridges of this design. Notwithstanding that a small number of prototype rifles were made for this “base-fire” cartridge design, probably no more than ten. Faced with the insurmountable problem of not being able to find anyone who could mass produce their cartridge design Smith and Wesson would use the “Volcanic” cartridge for their early model lever action pistols and Henry for his rifles, before moving to rimfire cartridges and subsequently to centerfire cartridges as the iconic Winchester lever action rifles came into being.

Of the small number of prototype Smith & Wesson lever action rifles made for the “base-fire” prototype cartridge only three are known to still exist; one is in the Cody Firearms Museum while the other two are in private hands. One of these is coming up for sale by Rock Island Auction at their Premier Auction which will be held from May 22-24, 2020.

This rifle will be offered for sale on May 22, 2020 and you can find the sale page with more details if you click here.

This protobype Smith & Wesson lever action rifle has a tube magazine under the barrel with a front section that folds to one side to allow loading.

An unusual feature is that the rifle has the main trigger guard attached to the action frame while the lever is separate and wraps around it.

The rifle that is coming up for sale has a nickel plated action and features engraving making it the most decorated of the surviving examples of these rare rifles.

The 20″ barrel is half octagon while the stock wood is high grade walnut. 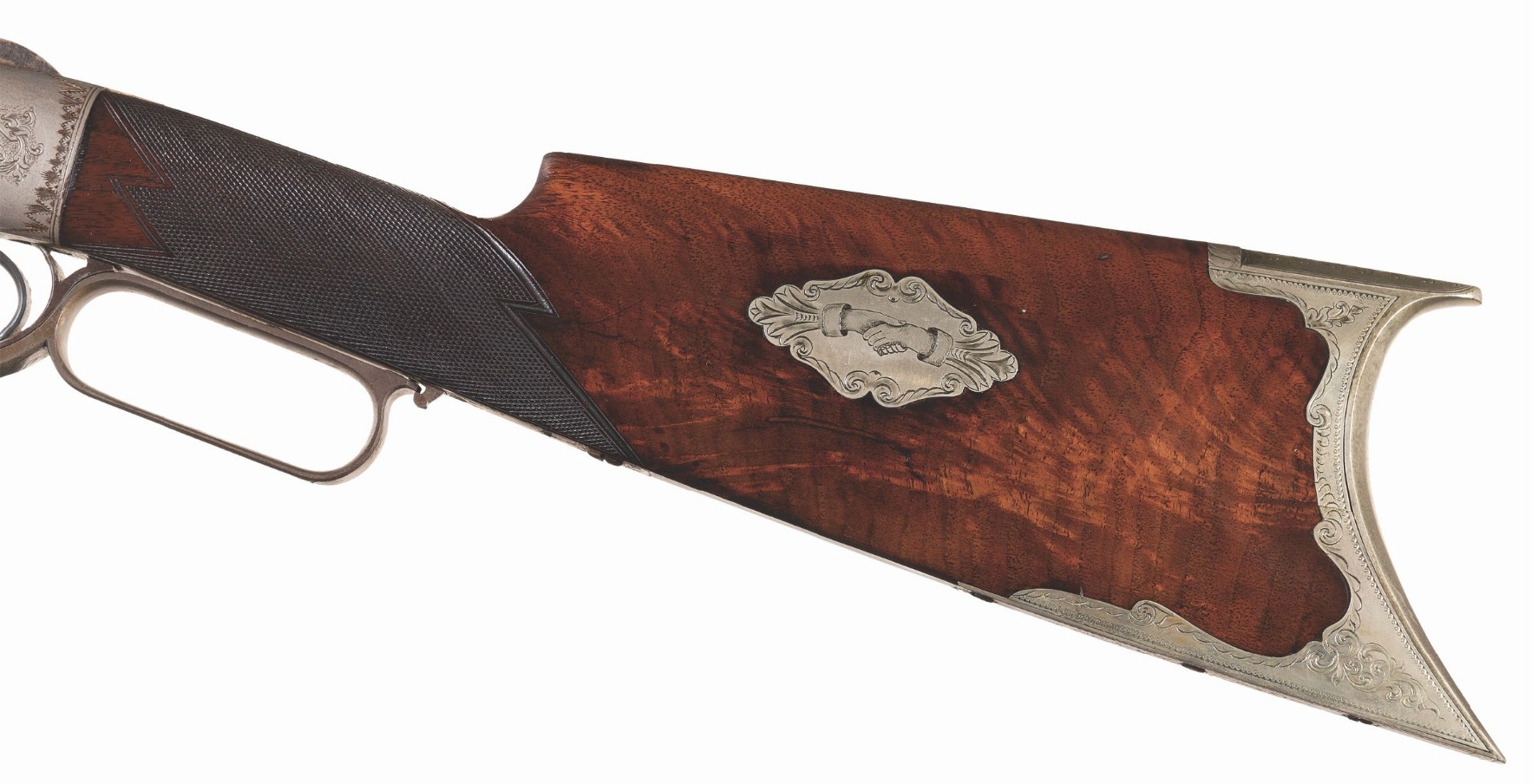 On the left side of the butt-stock is an engraving of a “handshake forever” quite probably symbolizing the partnership between Horace Smith and Daniel Wesson.

Being such a rare example of the developmental stages that led to the creation of the American lever action rifle this is a collector’s item of very high value. It represents one of the most important steps on the way to the Henry rifle and the ultimate creation of Winchester’s Model 1866.

This rifle is documented in the book “Volcanic Firearms” by Edmund Lewis and Stephen Rutter, and also in “History of Smith & Wesson” by Roy Jinks.