The Luger P04 Navy pistol is one of the more rare variants of the Luger and is one of the  best. There are two main variants of the German Navy Luger, the P04 and the P14. The two are almost identical but the P04 has a grip safety catch whereas the P14 does not. The P14 also has flat checkering on the toggle.

The Luger P04 was the first Luger pistol adopted by a German military force. The first military to adopt the Luger had been the Swiss in 1900 and it was in caliber 7.65x21mm. The Swiss had done extensive testing of the Luger pistol before adopting it, and around the same time the German Army also tested the pistol but had not adopted it yet as they were committed to upgrading all their infantry rifles to the Mauser Gewehr 98 and budgetary constraints meant that adoption of a new pistol was put on hold. The German Navy however was in the market for a new handgun to replace the obsolete Reichsrevolver. The Reichsrevolver was a single action solid frame revolver chambered for the German 10.6x25R, a pistol cartridge similar in size and power to the .44 Russian. The Reichsrevolver was slow to reload because it required the use of a separate ejecting rod to push the fired cartridge cases out of the cylinder. The Luger pistol by comparison was in a league all its own and so the German Navy decided to take the findings of the Swiss trials and the German Army trials on face value and they placed their first order for the pistol in 1904.

The German Navy Lugers were fitted with a 150mm (5.9″) barrel and had a rear-sight that was adjustable for 100meters and 200metres. Both the P04 and the later P14 were slotted for a shoulder stock to enable its use as a handy light carbine. The Navy pistol was chambered for the 9x19mm Parabellum cartridge and although it would be difficult to reliably hit a man size target at 200 meters with it one could certainly make an enemy duck for cover, and one might even score a lucky hit. So the adjustable rear-sight made sense on this Naval pistol. As the main use of the Navy pistol would be for boarding enemy ships or repelling boarders the P04 Luger, with its semi-automatic capability and 8 round magazine was a perfect small arm for Naval use.

The German Navy placed its order for 2000 Luger pistols in December of 1904 and pistols from that first order are highly valued collector’s items. That order was made before the official approval was given to purchase Luger P04 pistols in greater numbers. That approval was given in May of 1905. Of those original Luger P04 pistols there are very few survivors in original condition. This is partly because they were used in the First World War and that took its terrible toll. But also because after the war the terms of the Treaty of Versailles required that the barrels of all Luger pistols be shortened to 100mm (3.9″). Because of the rarity of the original pistols auction prices for a good one tend to be in the order of USD$60,000 on up.

The Luger P04 pistol in our photographs is a reproduction from one of the foremost restorers of Luger pistols in the world, Gale C. Morgan. Gale Morgan’s work on Luger pistols is nothing short of legendary and he is known for his ability to make rust pitting disappear by intricate welding, and for his ability to re-finish a pistol so the bluing and woodwork are almost indiscernible from a brand new original. In this case he has created a reproduction Luger P04 that is correct in every detail and it is affordable enough that one could feel comfortable shooting it. Something one would likely not risk with an original Luger Navy P04.

This pistol is coming up for sale by Rock Island Auction at their Regional Auction to be held over 16th-19th February 2017.

For those interested in the history of the Luger Navy pistol the book “The Navy Luger” by Joachim Gortz and John Walter is recommended.

You will find it on Amazon if you click here.

If you are looking to acquire a Luger P04 Navy pistol for your collection and can’t find an original then this reproduction may be attractive to you. As a pistol that is affordable enough to shoot and one that is in every way the equal of an original this Gale Morgan Luger is a masterpiece that is well worth acquiring. 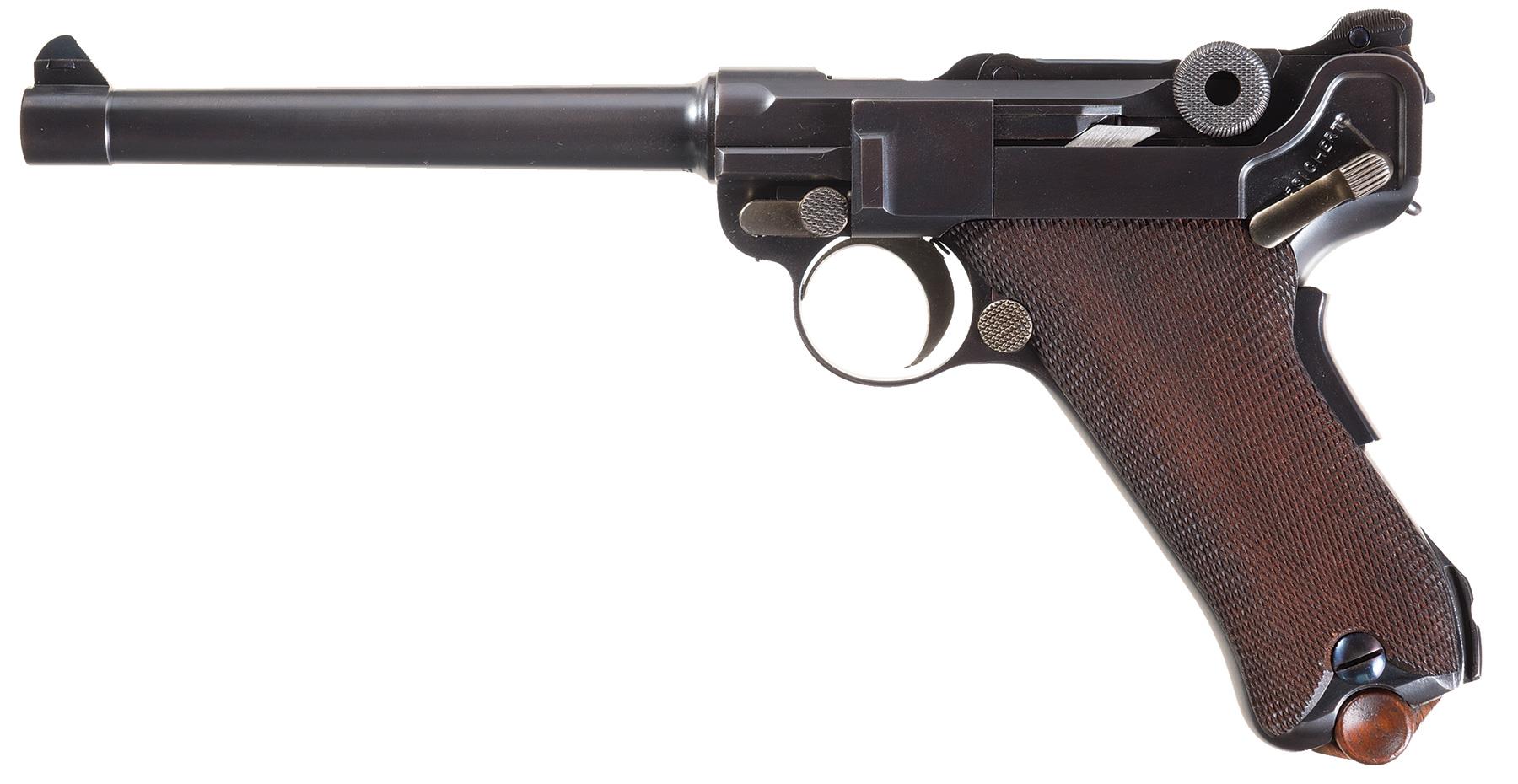