I for one am a shooter and hunter who really likes nice quality walnut rifle stocks matched with polished and blued steel, preferably on a top grade bolt action rifle with a controlled feed action, or a double rifle. But there are times and situations where taking your drop dead gorgeous custom rifle might just not be the most appropriate thing; times when we need a rifle that is unpretentious, reliable, and if push comes to shove, whose loss or damage is not going to be a cause of much wailing and gnashing of the teeth. If you are looking for a rifle that is going to be something you may need to take into pretty horrid conditions, or you need a rifle that is not going to cause the people you are shooting with to have dollar signs rack up in their eyeballs, then a Baikal can be a superlative choice. 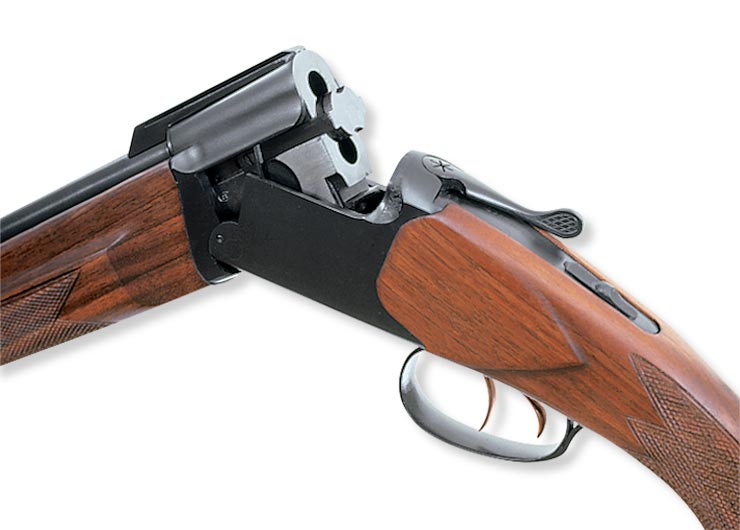 There are shooters out there who are dismissive of the Baikal rifles and guns, even claiming that the stocks are made from recycled Trans Siberian Railway sleepers (ties) and that the steel is scavenged from scrapped Soviet era tanks. The stocks are in fact not made of old railway sleeper timber, a Baikal double rifle I was shooting recently had a surprisingly nice walnut stock that caused me to wonder if this was a special deluxe model. Similarly the steel they’re made of is not scavenged from scrapped battle tanks but the rifles themselves are built like a proverbial tank, in fact the factory they’re made at has a history of making rugged combat arms for the Russian military; so these guys know how to make a rifle that’s going to be a survivor, and a rifle that is going to help you be a survivor. 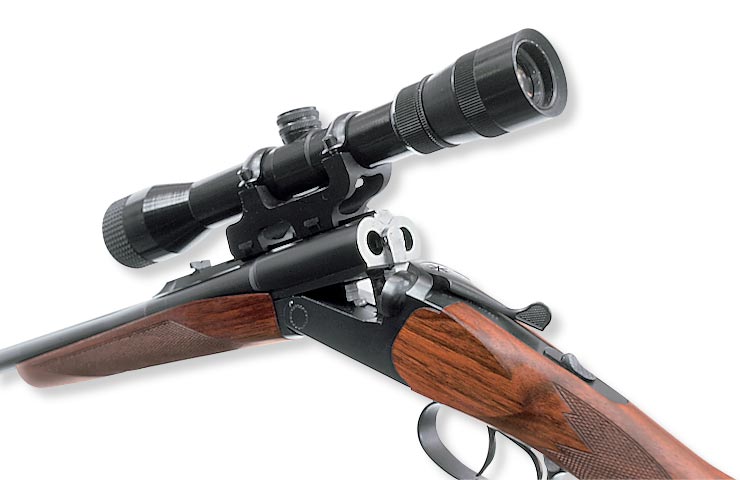 The side by side Baikal MP-221 Artemida double rifle is solid and well built.

So the time you buy a Baikal is if you are looking for an affordable rifle that is ruggedly reliable and, if push comes to shove, replaceable. A Baikal double rifle is not a British best rifle valued at tens of thousands of dollars; its a practical rifle with some surprisingly sophisticated features.

The MP-94 Express is an over/under double rifle with the provision to easily adjust the barrels to the correct point of impact.

The MP-94 Express double rifle is made in .223 Remington, .30-06 Springfield, 9.3x74R, and .308 Winchester (7.62×51 NATO). In the above picture it can be seen that the barrels are kept separate and this is done to provide for owner adjustment so that the double rifle barrels can be regulated to shoot closely parallel to each other, or together at a predetermined distance. Not having the barrels soldered together also allows even cooling air circulation over the barrels to assist in the barrels maintaining their point of impact even in sustained rapid fire shooting. The fact that this is an over/under rifle also means the shooter’s hand on the fore-end will not need a glove as it will only be in contact with the fore-end wood and not the hot steel barrels. The level of safety offered on the MP-94 is exceptional providing both an automatic safety that blocks the sears when the hammers are cocked and prevents a casual shot when barrels are unlocked, and an extra-safety in the form of sear interceptors which prevent the rifle from discharging if the hammers are accidentally jarred and released without a trigger pull. The provision of both a trigger block safety and intercepting sears makes this a very safe rifle.

The MP-94 Sever combination gun has a small bore rifle barrel over a 20 gauge shotgun barrel. The rifle calibers are .22lr, .22WMR, or 5.6×39 (.220 Russian), whilst the 20 gauge shotgun barrel has a 3″ (76mm) chamber and can optionally be ordered with interchangeable screw in chokes. This is probably one of the best fox whistling guns out there providing a quiet rifle for the longer shots and a shotgun for the fox who comes in close and then decides to bolt. This MP-04 features the same action as the double rifle with the same trigger block automatic safety with intercepting sears. Barrel length is 60cm (23½”).

You will find the MP-94 “Sever” Over-Under Combination Gun on the IMZ website if you click here.

The MP-94 Over-Under Combination Gun has the rifle barrel set below the shotgun barrel as it is available in higher powered rifle calibers.

The MP-94 Over-Under Combination Gun is made with the rifle barrel below the shotgun barrel because it is made in more powerful standard medium to big game calibers: .222 Remington, .223 Remington, 7.62×39, .308 Winchester (7.62×51), 7.62x53R (Finnish equivalent of the Russian 7.62x54R, this cartridge uses .308″ diameter bullets), 7.62x54R (the Russian cartridge that nominally uses .312″ diameter bullets although barrels can be from .308″ to .312″ groove diameter), .30-06 Springfield. The upper shotgun barrel is chambered 12 gauge with either 2¾” (70mm) or 3″ (76mm) chambers. This gun can be ordered with additional shotgun barrels to make it a double twelve bore and/or with screw in interchangeable chokes which are available in Improved Cylinder, Modified, Improved Modified, and Full.

The MP-27M is an unusual gun coming with a conventional set of over-under shotgun barrels and also with a set of Lancaster oval bore barrels for use with Brenneke style shotgun slugs.

The MP-27M is not actually a rifle but a shotgun that comes with a standard set of 12 gauge over/under shotgun barrels and an additional barrel set which are Lancaster oval bore barrels fitted with rifle sights. The Lancaster oval bore is an old method of applying spin to a shotgun slug to better stabilize it in flight and significantly improve its accuracy so it can be accurately used out to 100yards/100meters. The system works with the Brenneke style shotgun slugs. As the Lancaster bore is a smoothbore it is legally considered to be a shotgun in most jurisdictions.

The barrel regulating/adjustment mechanism enables the two Lancaster barrels to be regulated to shoot closely parallel or to a common point of impact at a set range.

The gun also comes with a conventional set of 12 gauge barrels which have 3″ (76mm) chambers and are available with either fixed chokes or the Baikal screw in interchangeable choke system.

The MP-27M is a conventional over-under shotgun from Baikal.

The MP-27M can also be ordered as a shotgun without the Lancaster oval bore barrels. The gun can be ordered with double or single trigger, selective ejectors, and with either fixed chokes or interchangeable screw in chokes. There is also a junior version of this gun available as model MP-27M Junior.

Selective ejectors available on the MP-27M and variants.

The last double rifle in the Baikal line-up is the side by side MP-221 Artemida. This rifle also features an adjustment mechanism so owners can regulate the barrels for different loadings themselves. This double rifle is made in .308 Winchester (7.62×51), .30-06 Springfield, and .45-70 Government. Depending on your usage I’d tend to recommend the 45-70 as perhaps the preferable choice for the side by side as its rimmed case and lower working pressure allows easier reloading. The 30-06 version of this rifle extracts fine but requires a bit more effort to eject the spent cases.

The Baikal double rifles, combination guns and shotguns are a lot of gun for not a lot of money. If you are looking for a practical double rifle or gun then a Baikal is often a sensible choice. If you are still wanting a rifle or gun that is of higher quality and more sophisticated finish Baikal can also accommodate you as they offer higher levels of finish on their rifles and guns.

Baikal make an impressive range of firearms including target and self defense handguns. You will find their main web page if you click here. 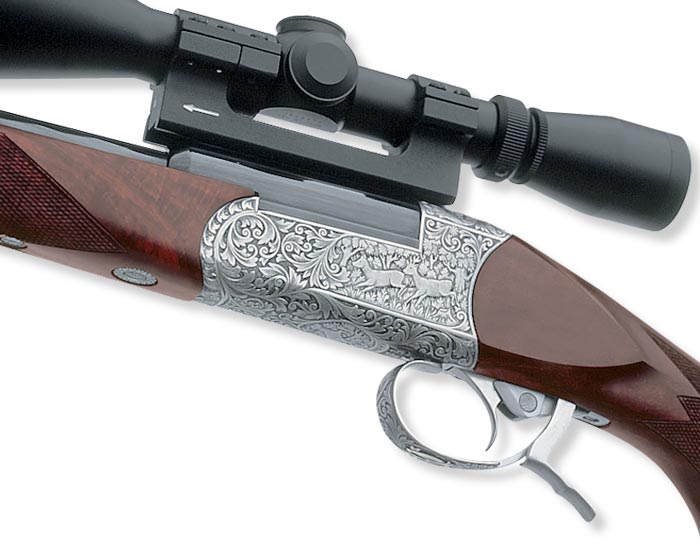