David Llewellyn Lloyd was a keen deer stalker and had an estate at Glencassley on which to head out deerstalking up in Scotland. He was also an engineer and metallurgist so he was well qualified and well equipped to take on the task of creating the perfect rifle for Scottish deer stalking and he proceeded to do just that. David Lloyd began his efforts back in 1932 at Pipewell Hall in Northampton, Britain, when he established his custom rifle business. 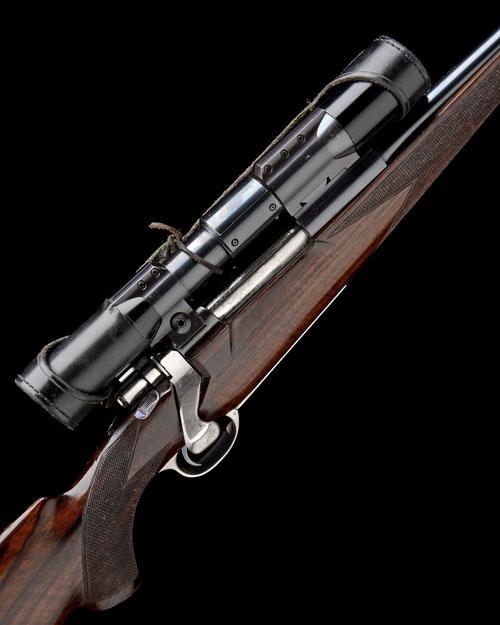 The most instantly recognizable feature of a David Lloyd rifle is the rifle-scope mounting system which forms a sleeve around the Mauser 98 action and sets the rifle-scope as low as possible on the action. Also note that the rifle-scope’s original adjustment turrets have been removed and replaced with a protective cover. One the rifle-scope had been fitted and zeroed it was not expected that it would need any further adjustment. (Picture courtesy invaluable.com).

We need to remember that back in the between wars period that telescopic rifle sights were in their infancy and consequently rifle-scope mounts were also in the early design and development stages. We also need to remember that British deerstalkers tended to be a very conservative group and not so willing to embrace the new technology of telescopic sights on rifles which was considered by some to be “dashed unsporting“. 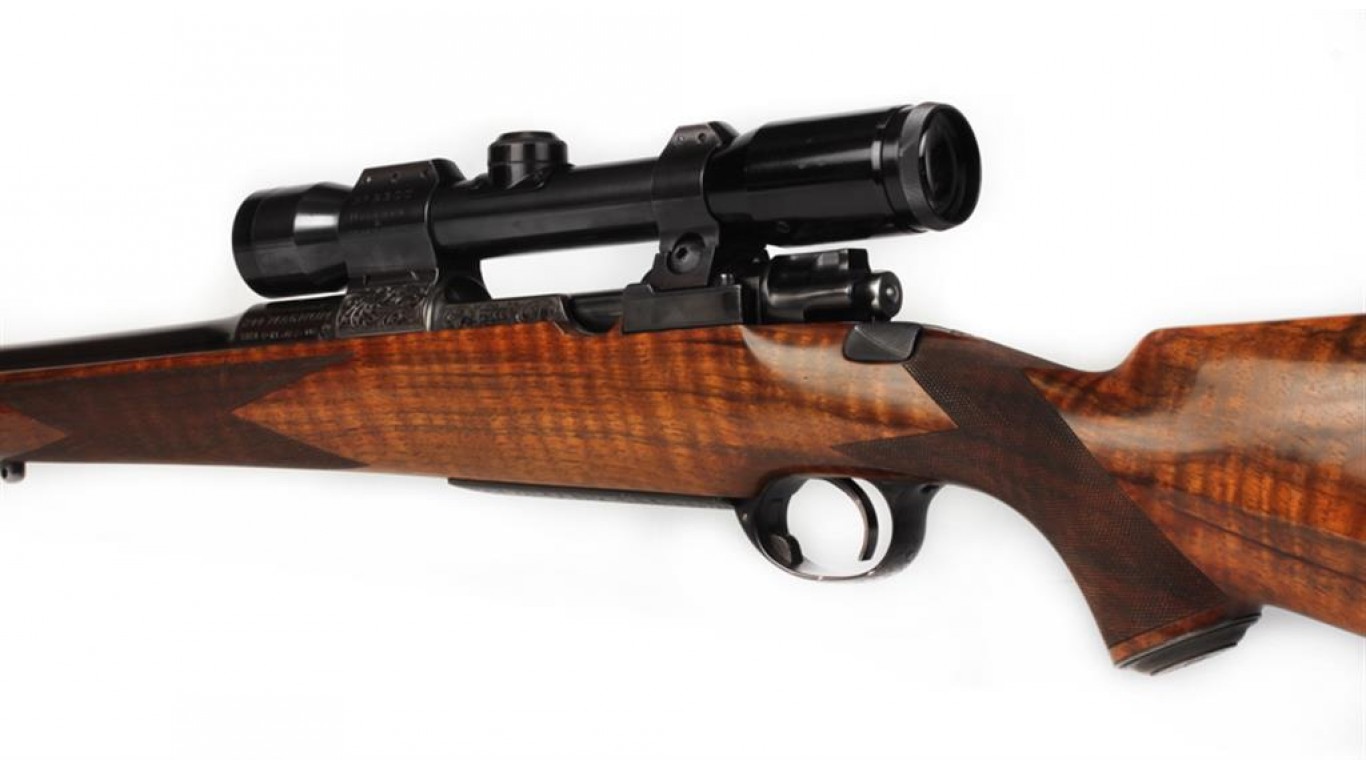 By the time the Second World War had come and gone and David Lloyd had completed his service with the Royal Air Force he began working on completely re-designing the method of mounting a rifle-scope and optimizing the accuracy of a rifle so that it would stay zeroed not just from hunt to hunt, but from year to year, no matter what the weather, nor the knocks or bumps. To this end David Lloyd determined that the best way to ensure both action stiffness and the most ruggedly stable mounting for the rifle-scope would be to sleeve the action with a steel sleeve that was soldered to the action just as a double rifle’s barrels were soldered together, and to incorporate the rifle-scope mounts into that action sleeve. 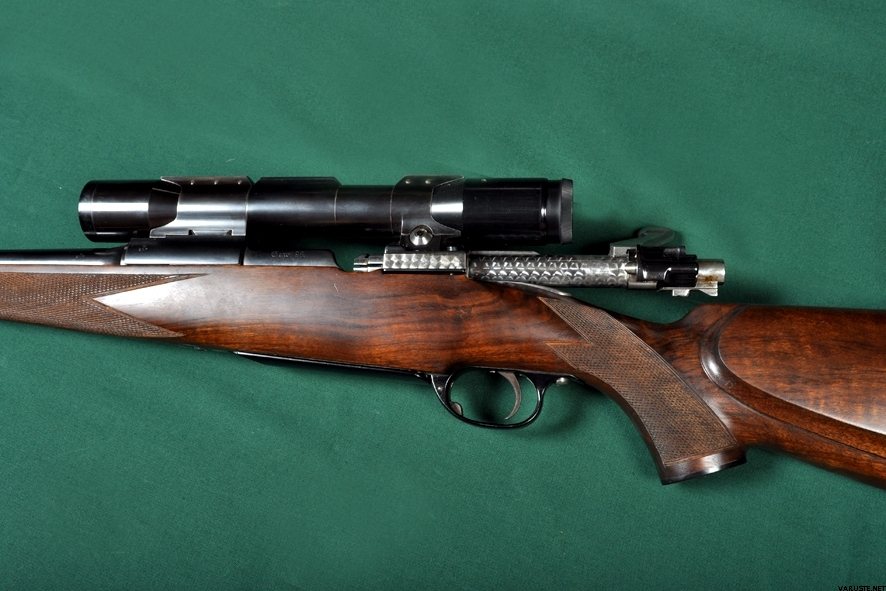 In this picture we can see the action and barrel sleeve with integral rifle-scope mounts. David Lloyd only used fixed power 4x or 6x rifle scopes from top makers such as Hendoldt, Zeiss and Swaarovski. He did this both to ensure optimum optical quality and reliability, and also to keep the objective lens small enough to enable the lowest practicable rifle-scope mounting height. (Picture courtesy viranomainen.fi). 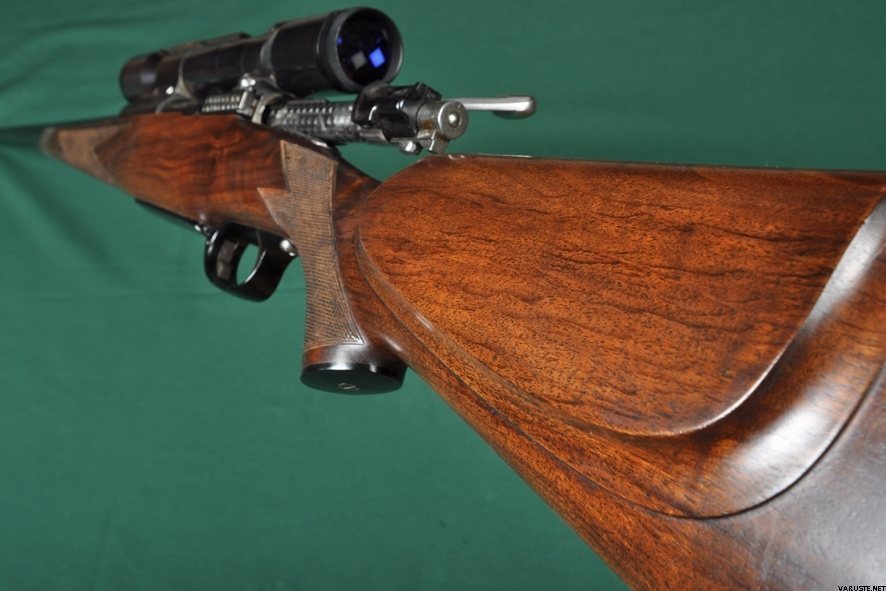 With the bolt handle raised and retracted we can see that this rifle-scope is mounted as low as practicably possible. (Picture courtesy viranomainen.fi).

You will find the above rifle in 7mm Remington Magnum for sale at viranomainen.fi if you click here.

Not content with creating one of the most stable and accurate rifles extant David Lloyd also designed what he thought would be the flattest shooting rifle cartridge with optimum resistance to deflection by the fickle winds of the Scottish highlands. To this end he started out with the .375 Holland & Holland Magnum case, necked it down to 6mm (.243″/.244″) and reduced the case taper a bit. His intention was to drive a 100grain 6mm bullet at 3,500fps and he succeeded. The original bullet itself was interesting having an aluminum jacket with a copper tip. 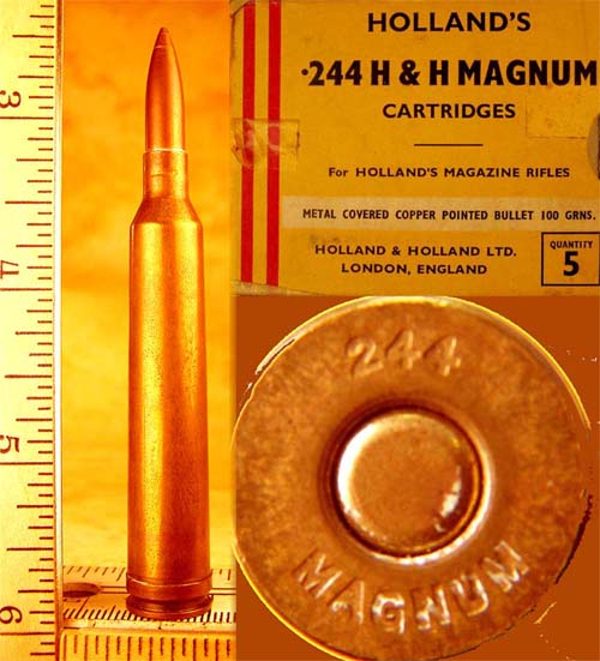 David Lloyd’s idea in creating the .244 Holland & Holland Magnum was to create a cartridge with a flat 300 yard trajectory and one that would minimize error when shooting up or down at steep angles as was common on his own Glencassley estate for example. Once he had the cartridge designed and tested he gave it to Holland & Holland who in turn gave him £250 towards his costs in developing and testing it.

David Lloyd’s design work was admired by both Bill Ruger and Roy Weatherby, both of whom owned and used Lloyd rifles. David Lloyd continued his custom rifle business until he passed away in 1996. The business was carried on on a more reduced scale by his wife Evadne Lloyd, who was the longest serving Governor of the Royal Shakespeare Company, until her passing in 2003. Evadne Lloyd had been actively involved in the business all along and was instrumental in obtaining the beautiful walnut stock blanks for the custom rifles. 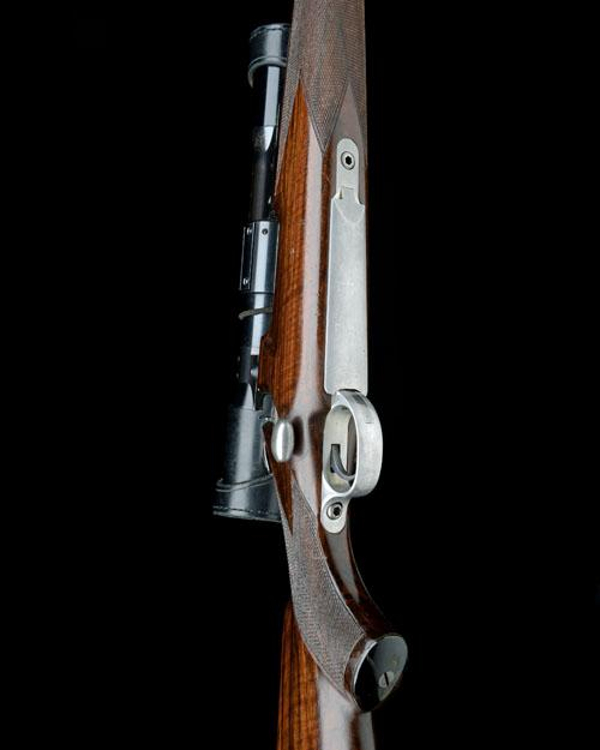 Workmanship on an original David Lloyd rifle is second to none. (Picture courtesy invaluable.com).

David and Evadne Lloyd’s rifle-making business is nowadays owned and run by Ronald Wharton who is an ex Rigby rifle-maker. He now builds bespoke M2000 Lloyd rifles fitted with the modern 1.7-10x42mm Swarovski rifle-scope, having re-designed the mounts to accommodate it.

David Lloyd’s designs have been influential and highly regarded by knowledgeable deerstalkers including the doyen of lady deerstalkers Patricia Strutt who purchased a David Lloyd rifle at the age of 75.

In his lifetime David Lloyd accounted for approximately 5,000 deer, almost all using rifles of his own design and make. He was a pioneer in the use of sleeved actions and in the creation of over-bore high velocity magnum rifles, including a cartridge of his own design which is still available from Holland & Holland as are bespoke rifles chambered for it. The majority of David Lloyd rifles are chambered for his own .244 H&H Magnum, the .264 Winchester Magnum, 7mm Remington Magnum and a few in 25-06 and .243 Winchester. His rifle’s are highly prized by dedicated deerstalkers in Britian to this day and they can turn up for sale in Europe and the US also. Or of course you can contact Ronald Wharton and get him to build you a modern bespoke M2000 Lloyd rifle.

You will find the above pictured .244 H&H Magnum by Holland & Holland for sale at springer-vienna.com if you click here.

(Feature image at the head of this post courtesy timeincuk.net).