The Citroen DS series is, without doubt, one of the most extraordinary motor cars ever to grace the roadways of planet earth. When it was first introduced at the Paris Motor Show of 1955 the company received 743 orders in the first fifteen minutes of the show and 12,000 for the first day. It was a car that was jaw droppingly different, yet equally practical, and back in 1955 we did not have Jeremy Clarkson telling us that “It’s French, and therefore not working”.

Citroen began working on the DS series in the late thirties (around 1937-1938) and although the Nazi invasion of France put that development somewhat on hold for a few years the Gallic determination to emerge from World War II with something with which to astonish the world payed off. The design team included the Italian sculptor and industrial designer Flaminio Bertoni, French aeronautical engineer André Lefèbvre, and Paul Magès (who developed the hydro-pneumatic suspension). 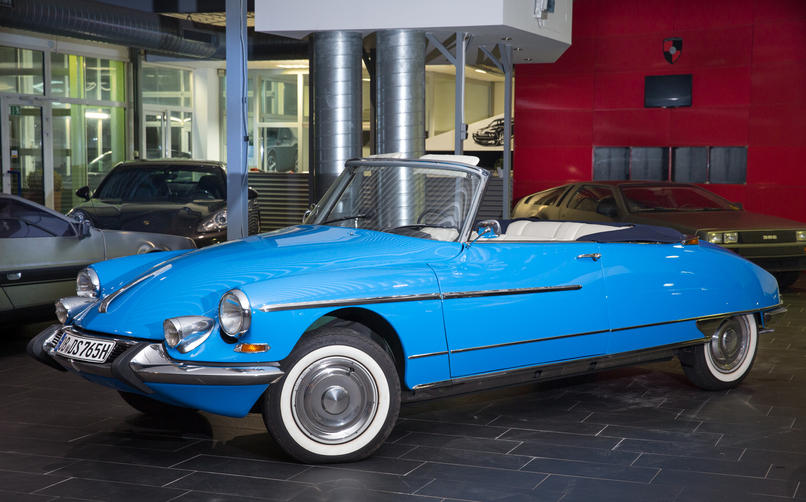 The Citroen DS was a radical design departure from its predecessor the Traction Avant. Gone was the twenties and thirties look to be replaced with something that looked as if it had just been unloaded from a friendly alien star-ship. It looked as if it could fly. But looks on their own can be deceiving, and the Citroen DS had not only the looks but also the design engineering to make this one of the most practical road cars ever built. The DS featured a hydropneumatic suspension that used a combination of air pressure and hydraulics to provide the car with a variable height and self leveling suspension that made the car able to go places standard cars could not, certainly not without undergoing some rock and pot-hole induced involuntary underbody modifications. I had an experience recently going out to stay at a farm near a town called Jindabyne in South Eastern Australia. Getting in required a bit of a water crossing, and then getting to our gorgeous log cabin took us over a track in which the rocks jutted up like little model Everests. It would have been so nice to just move the suspension lever of a Citroen DS to high ground clearance and have the car rise up like a magic carpet so we could “climb every mountain…” instead of the inevitable scrape and crump of a conventional car. As I recall one could also jack up the car in order to change a wheel just using the hydropneumatic suspension controls. 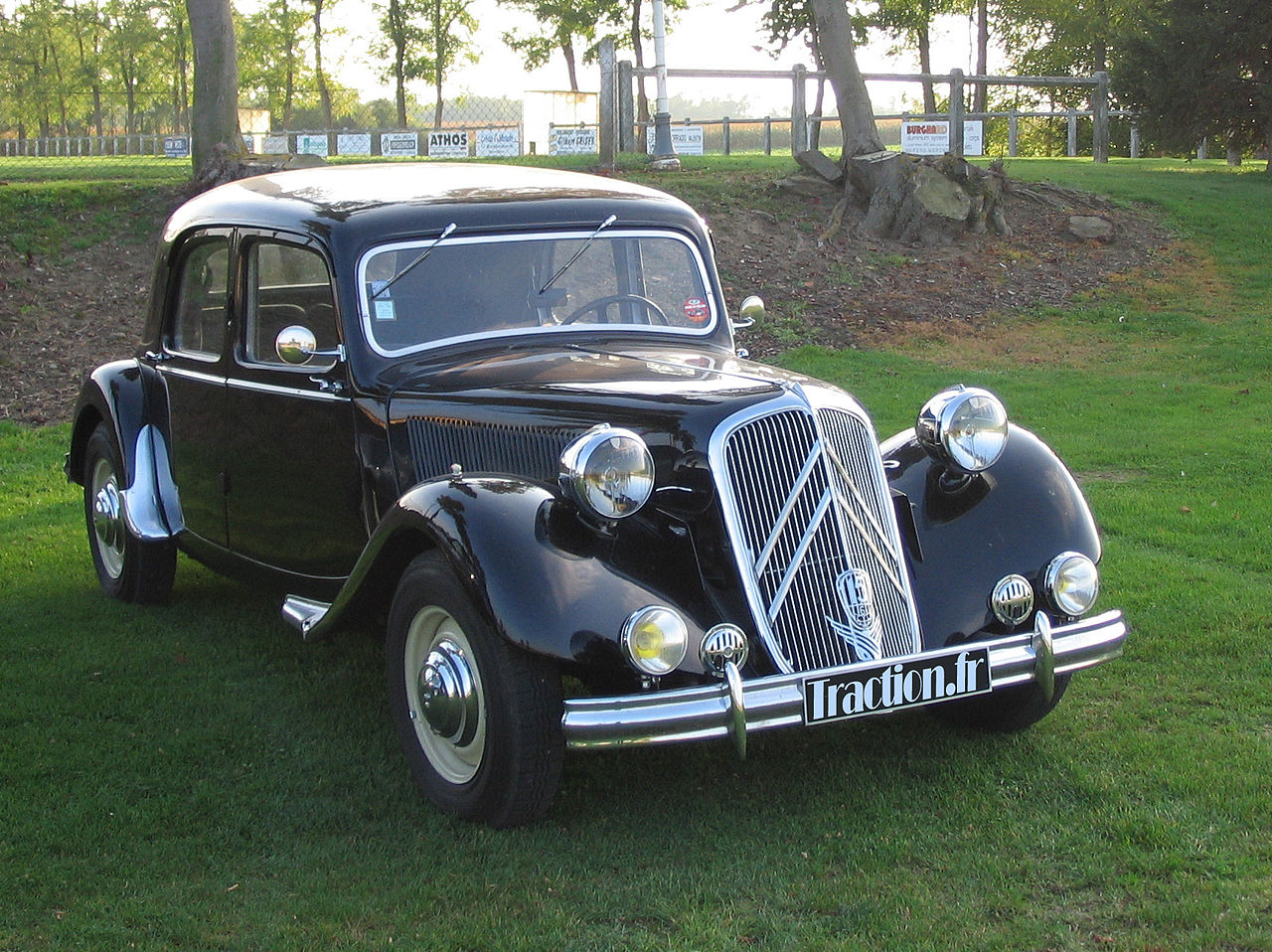 The predecessor of the DS series was the Traction Avant. A beautiful design, but not space age.

The Citroen DS featured a novel semi-automatic gearbox with a column shift control. The system is direct and pleasant to use and not at all reminiscent of the typical column gear shift to be found in fifties through to the seventies offerings from the likes of Ford and General Motors. For the sports car enthusiast a gear lever on the column is an anathema; but for the romantic French it is a sensible design feature. Consider a typical “out on a date” scenario. The guy is in the driver’s seat of his Citroen DS. The lady snuggles up close in the middle of the front bench seat. The guy puts one arm around the lady, but then he can’t change gear. The lady can do the gear-changing however and the absence of the need to synchronize a de-clutch means there will be no crunching of the gearbox, thus achieving a perfect start to their night out. This is of course also why the British and Australians drive on the left side of the road with the driver’s controls on the right side of the vehicle. Most people are right handed so the gentleman can steer with his right hand and the lady can change gear with her right hand also; it’s called “Right hand drive” for a reason. Apologies to those on the Continent and in the Americas; but I’m afraid you got that wrong. 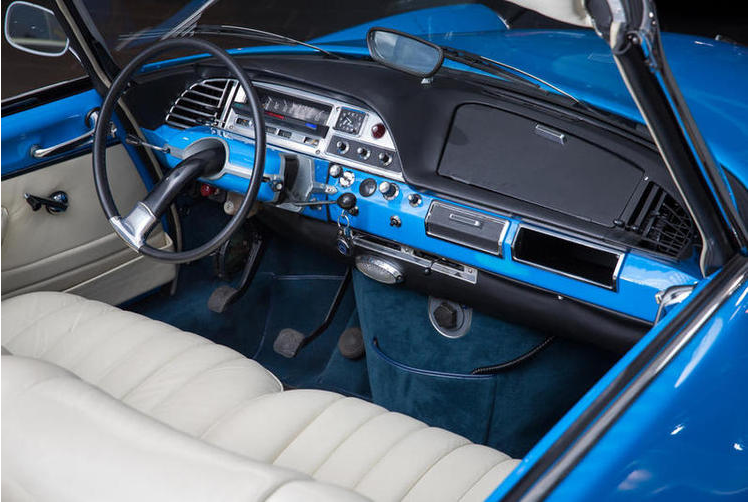 The romantic interior of the Citroen DS showing the single spoke steering wheel to help the driver see the instrumentation easily and thus keep his mind on his driving, and the convenient location of the gear control.

The Citroen DS, and its cheaper and more utilitarian cousin the Citroen ID underwent progressive improvement over the two decades of their production.  One of the neatest improvements came about in 1968 with a re-design of the front of the car which gave it four headlights under a glass cover, the great part about this is that the inner pair of headlights were controlled by the steering wheel so they would look in the direction the car was steered. If you’ve never tried driving on back block south western Australian roads in karri forest at night trying to spare the lives of the kamikaze kangaroos then you might not immediately appreciate this feature. But if you’ve had that or a similar experience then the sheer common sense of having lights that look around the corner into the road you are steering into will immediately strike you as a great idea, so you don’t get struck by a kangaroo as it comes through your windscreen. In such a situation the ‘roo often ends up in the back seat and it is prudent to stop the car and get out really quickly; and then open both rear doors so it can escape. You can only miss what you can see, so steering headlights are a neat idea that save on broken windscreens, car interior shampooing and deodorizing, and extensive upholstery repairs. 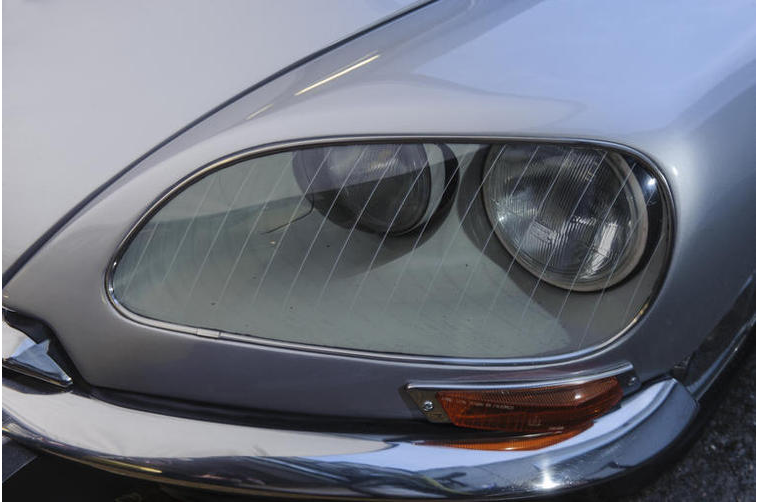 The steering controlled headlights of a Citroen DS 21.

Although not primarily designed as a “sports car” the Citroen DS proved itself in motor sport despite having really been created as the prettiest and most practical piece of automotive transport one could hope for. The Citroen of Lucian Bianchi almost won the 1968 London to Sydney Rally and only lost when it was involved in a head on collision with a car being driven by a drunk driver just 98 miles from Sydney. Back then Australia was not so much a “land flowing with milk and honey” as it was a “land overflowing with beer and barbies (as in “chuck another prawn on the barbie”)”. Random breathtesting has helped deal with that unfortunate foible.

There are three Citroens coming up for auction at Bonhams Les Grandes Marques du Monde au Grand Palais to be held in Paris on 5th February. A 1965 Citroën DS19 Cabriolet (which is the blue car in this article), a 1968 DS 21 décapotable which has the kangaroo avoiding steering controlled headlights, and an example of the practical and more mundane ID19 berline of 1965. 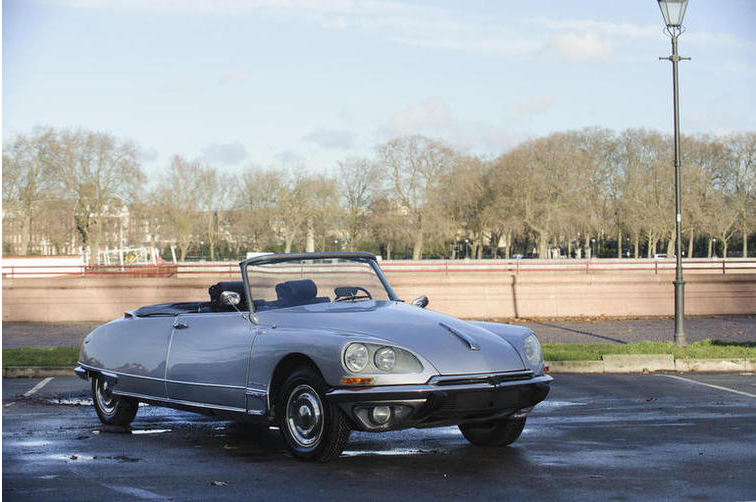 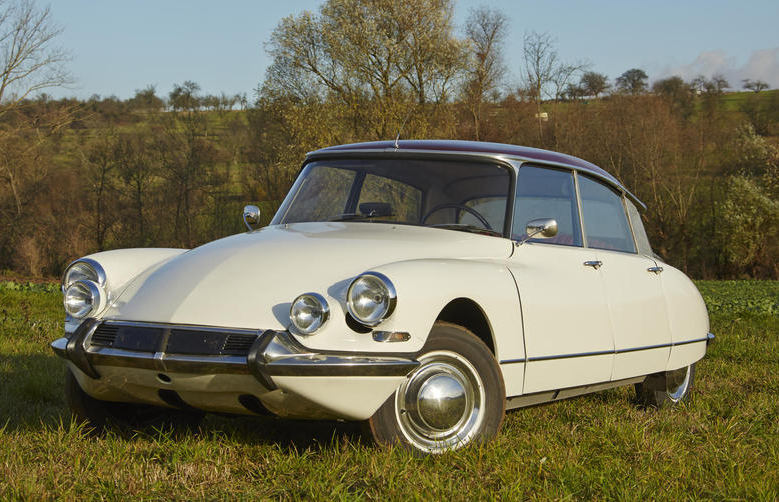 1965 ID19 berline coming up for auction by Bonhams; practical, rugged, and gorgeous.

There were almost a million and a half Citroen DS and ID made in the two decades of production. They were popular for good reason; they merged beautiful design with imaginative engineering to create what many believe to be the single most practical road car ever created. I’ve certainly had more than a few moments driving in outback Australia when I wished I was driving one. They are a quite unique car on which you can lower the suspension for highway cruising and yet raise it up to get ground clearance when the going gets a bit rocky.  Personally I wish they still made them.