The first generation Ford Bronco has quietly become a sought after automobile and with good reason, the Ford Bronco featured refinements that the International Harvester Scout did not have, especially with regard to the front suspension. The result was the Ford Bronco was, and still is an easy to restore vehicle that is conventional and easy to maintain and easy to customize. So, whether you are a collector looking for a pristine original example, or a person who wants to have and on-road/off-road vehicle that will comfortably cruise at highway speeds and yet is equally capable off road then the unassuming first generation Ford Bronco is a car that is worth taking a look at. 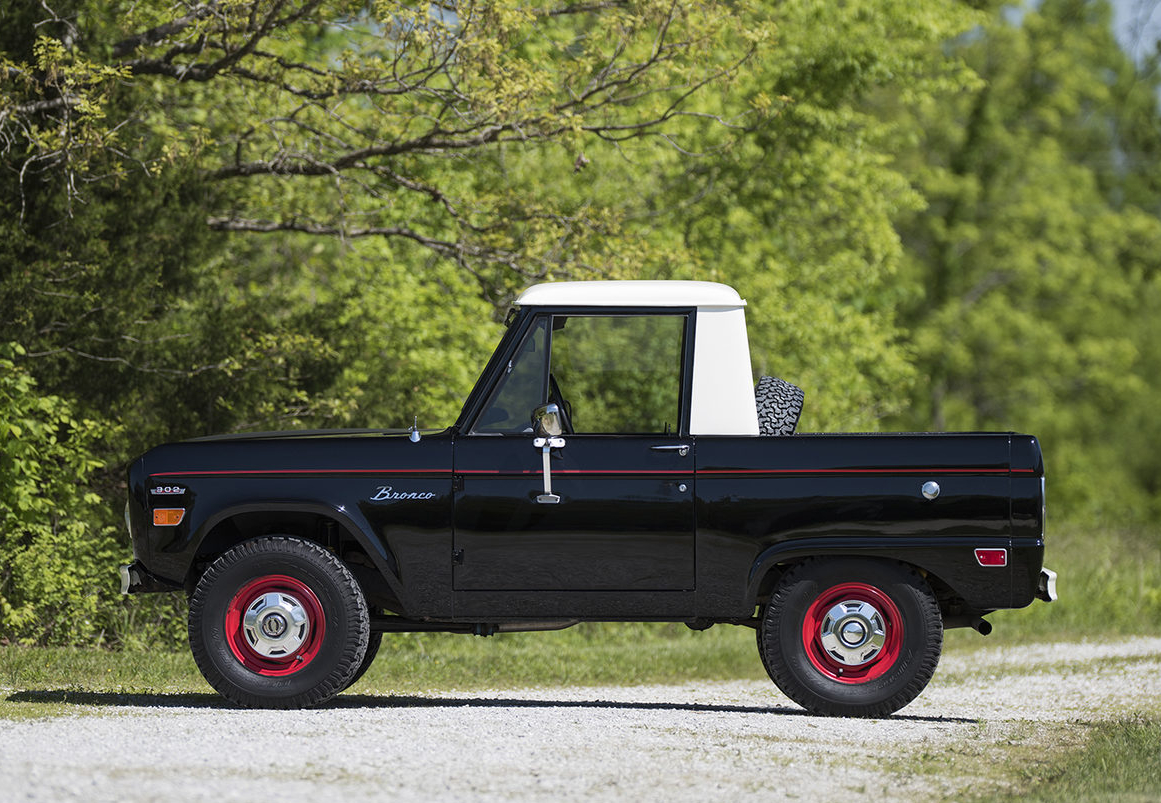 The Ford Bronco’s 94″ wheelbase sits it squarely between the short and long wheelbase Land Rover.

The Ford Bronco was originally created as Ford’s answer to the International Harvester Scout, which had effectively created a new genre of American car, what was then called the MPV (Multi-Purpose Vehicle) which was later to morph into the SUV (Sports Utility Vehicle). During the late fifties and early sixties Ford had seen the success the International Harvester Scout was having and reasoned that they could get into this new market segment. Ford product manager Donald N. Frey (the man who created the Ford Mustang) created the concept which was supported for production by Lee Iacocca. The concept was then handed to a design team led by Ford engineer Paul G. Axelrad who created the automobile. 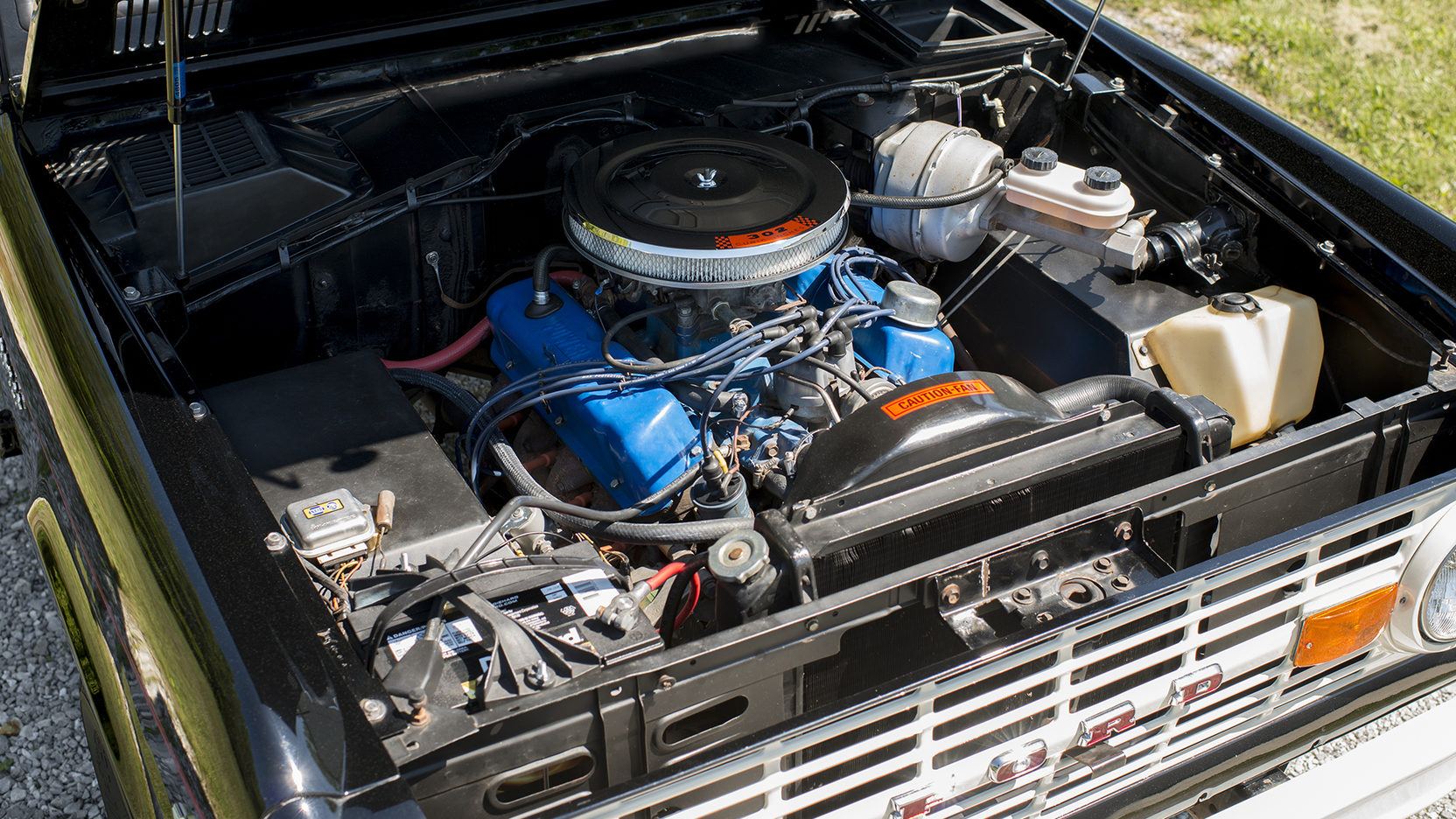 Production of the Ford Bronco began in August 1965 with cars being listed as 1966 models and that first model continued until August of 1966. Ford wanted to use off the shelf parts for the Bronco as much as possible so the original engine chosen was the 170 cu. in. in-line six cylinder that was used in the Ford Falcon passenger car and the Ford Econoline light trucks. This engine was modified a bit to make it more suitable for a four wheel drive by replacing the hydraulic lifters with solid lifters, fitting a carburettor with modified float so it could operate at the more extreme angles that an off road vehicle needs to work at, changing to an oil bath air cleaner to ensure the vehicle could operate well in extremes of dust, and re-modeling the sump partly so the engine would fit the chassis and front suspension and also to increase its capacity to six quarts. This engine was mated to a conventional three speed all synchromesh gearbox with a column shift. 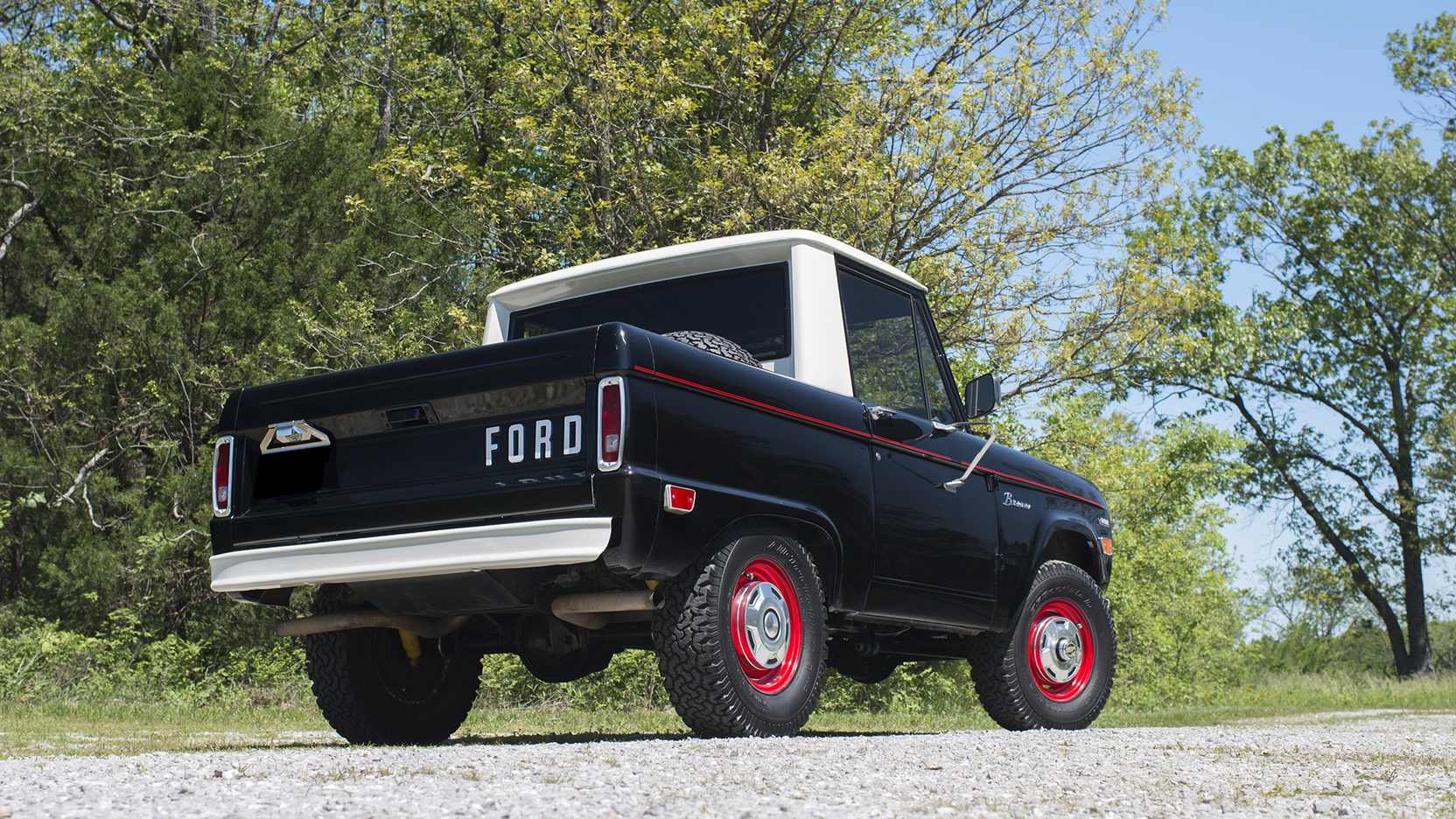 Rear suspension of the Ford Bronco was the conventional Hotchkiss type live axle with leaf springs but the front was a more advanced coil spring arrangement.

The chassis for the Ford Bronco was purpose designed with a conventional live axle and leaf springs suspension at the rear. The front suspension was more sophisticated however having radius arms that were mounted just to the rear of the transmission with coil springs and a lateral tracking bar to provide the live axle with more travel than would be possible with leaf springs and also to provide anti-dive stability. The coil spring front suspension was also instrumental in enabling the Bronco to have a tight 34′ turning circle. The original fuel tank was of 12 US gallons capacity and amongst the optional extras was a reserve tank, power take-off, winch, and snow plow. 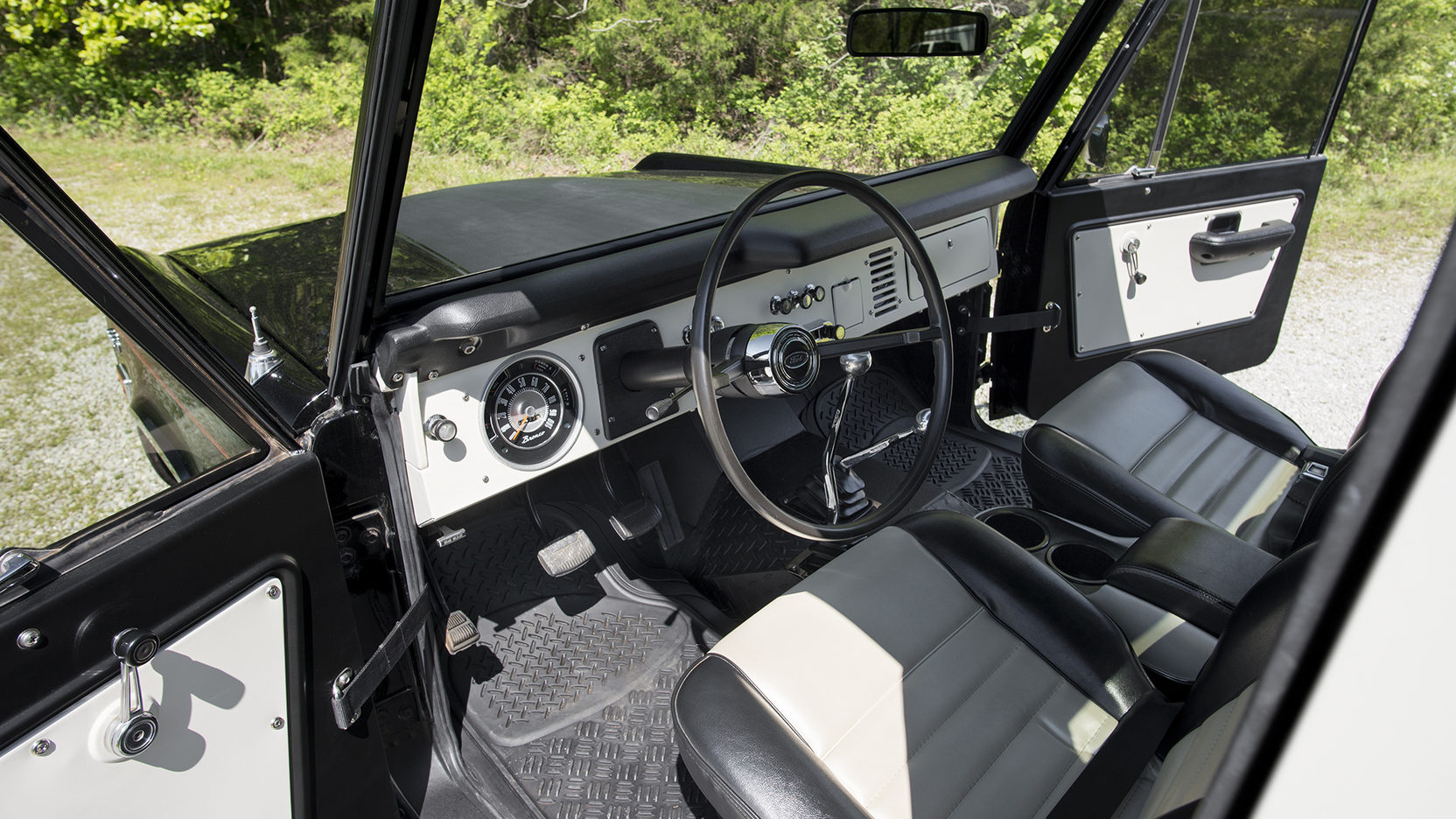 Interior of the Ford Bronco was always kept utilitarian but went through various upgrades over the model years. This car has a nicely customized interior complete with bucket seats.

The interior of the Bronco was kept utilitarian but provided a step up in comfort by comparison with the Jeep and the Land Rover. The Bronco was also much more capable both on and off road being capable of higher highway speeds of around 60mph or more.

The axles and running gear of the Bronco were taken off the Ford parts shelf and included axles and drum brakes used for the F100, whilst the transfer box was a stock Dana unit. Over their eleven year production run the Bronco was fitted with four engines; the original 170 cu. in. six cylinder with an optional 289 cu. in. V8 in the early cars, and a 200 cu. in. six with an optional 302 cu. in. V8 on later cars. The Bronco did not get disc brakes at the front until the 1976 model year, one year before the end of production for the first generation and beginning of production for the second generation. 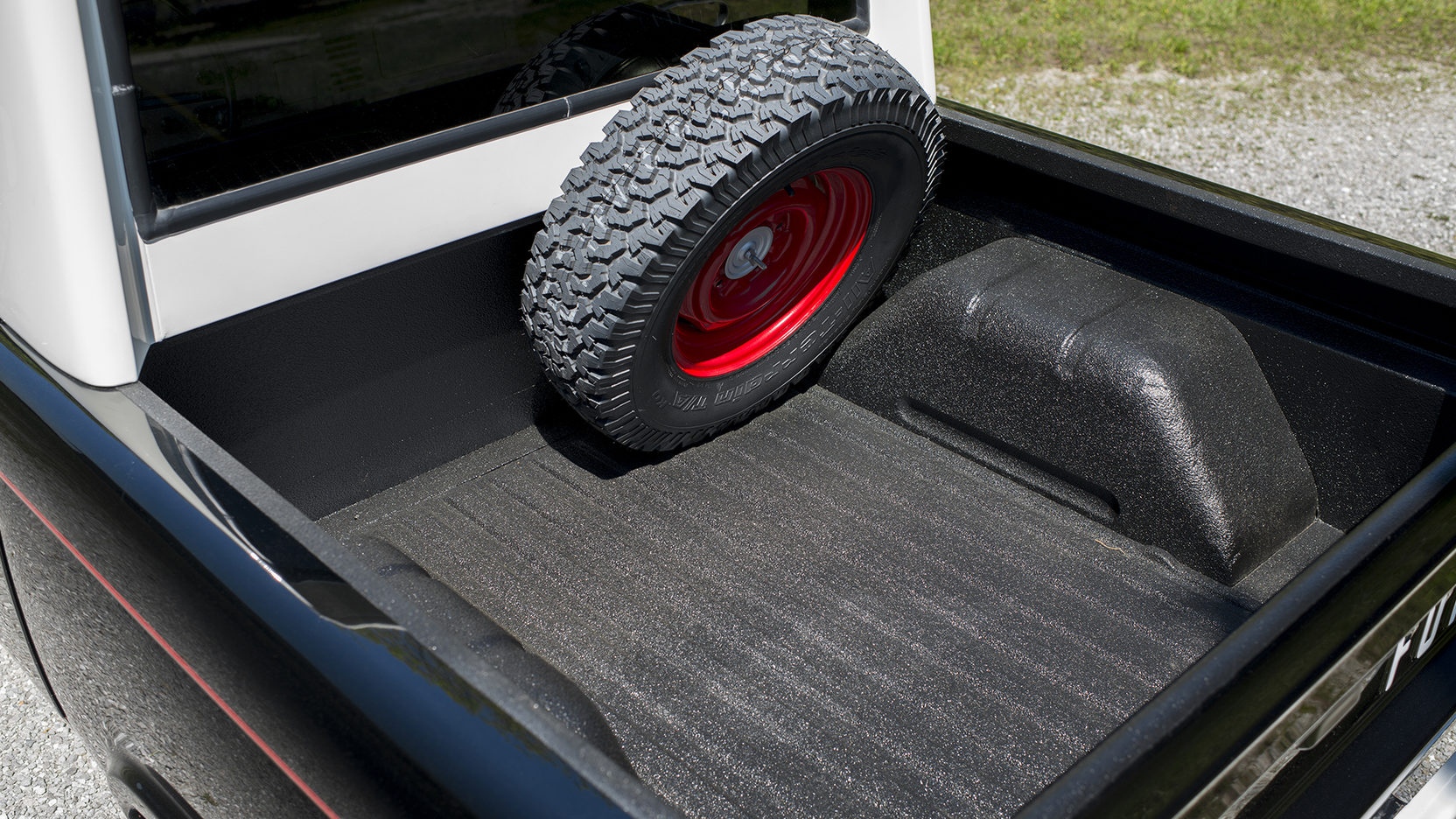 The Ford Bronco was rated as a half ton pick-up. The pick-up version was reasonably popular but did not sell as well as the wagon.

At the upcoming Denver Mecum auction to be held over July 20-22, 2017 there are six first generation Ford Broncos coming up for sale:

If you are looking to acquire one of these great four wheel drive vehicles these six Broncos are well worth a look. 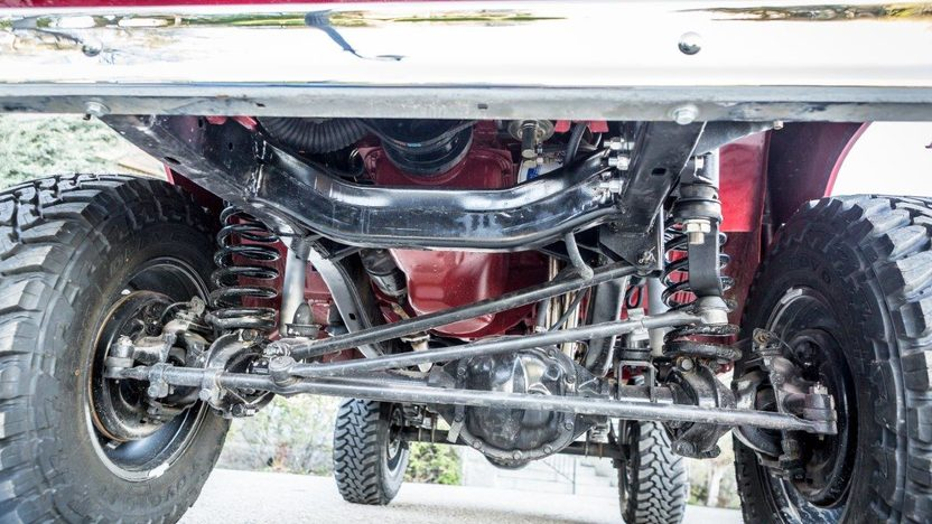