They were a revolver favored by Pat Garret and Jesse James. During the frontier era of the second half of the nineteenth century the Merwin Hulbert revolvers were not just the equal of the revolvers from Colt and Smith & Wesson but some regarded them as superior. Pat Garret and Jesse James were two men who were of that opinion. All too often it is the better firearm that seems to become the rare one that few have heard of and this was certainly the case for Merwin Hulbert who encountered the same problem as Smith & Wesson when they obtained a large contract to supply revolvers to the Russian government and discovered after they had supplied the guns that the Tzar was not going to pay them. Smith & Wesson managed to survive the financial loss, Merwin Hulbert managed to continue until 1916 but never fully recovered. 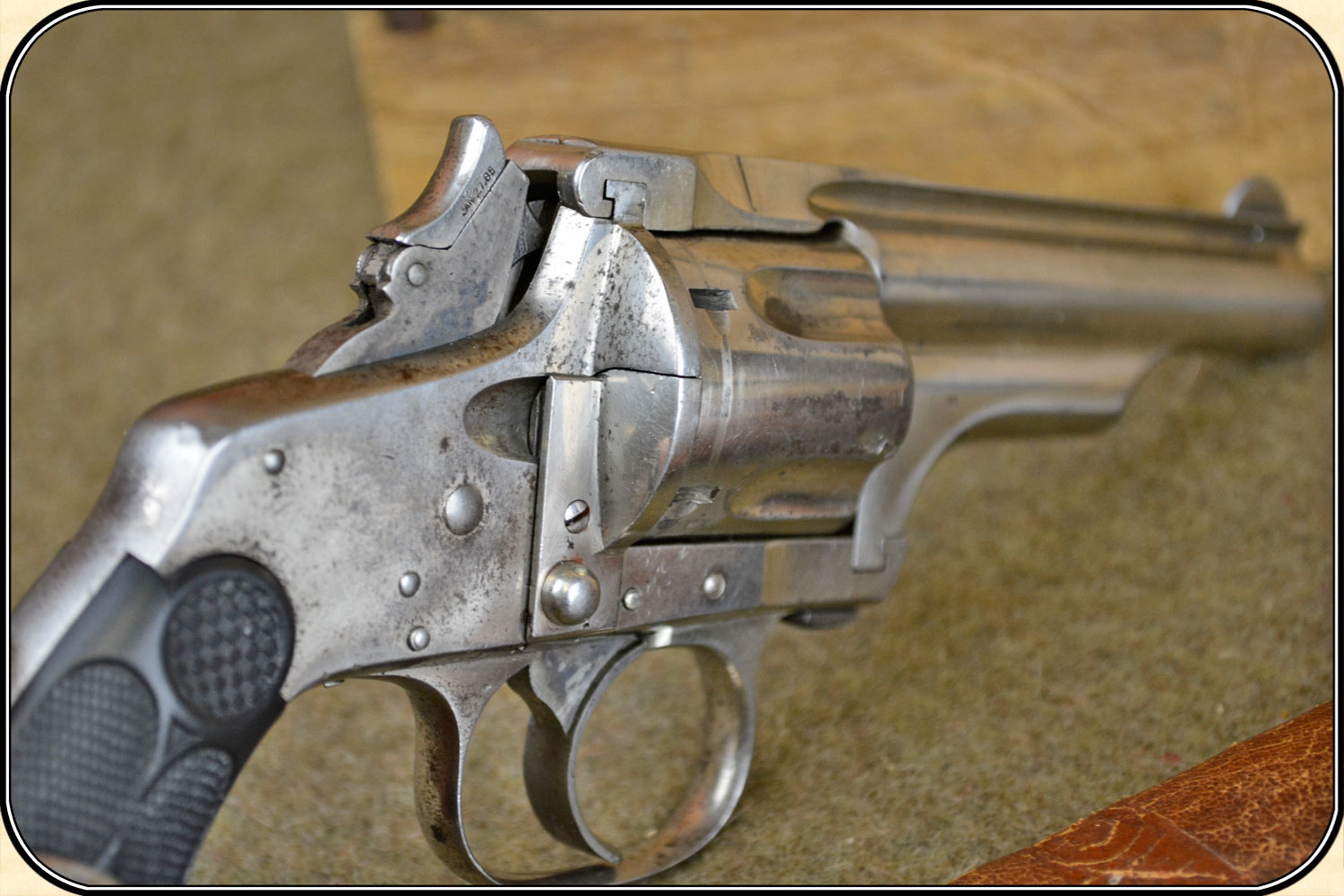 A casual look at the rear of a Merwin Hulbert revolver reveals a conventional looking loading gate and loading the revolver is quite conventional. It is the unloading that is startlingly different. (Picture courtesy riverjunction.com).

The design and quality of manufacture set the Merwin Hulbert apart. Although the design used a conventional fixed cylinder with side loading gate so the user needed to load cartridges one at a time, ejection of spent cartridges was a very different story. The revolver was put on half-cock, and then a button under the action was slid rearwards to release the barrel/cylinder assembly allowing it to be pulled forwards ejecting the fired cases but leaving any longer loaded cartridges in the cylinder. To see this in action watch Mike Beliveau demonstrate shooting and reloading his Merwin Hulbert revolver in the video below.

From the video you’ve been able to see the reasons the Merwin Hulbert revolvers were favored by Pat Garret and Jesse James, and by the Russian Army. And not only was the ejection of fired cases and reloading a quicker operation but the Merwin Hulbert revolvers featured an enclosed shroud around the rear of the cylinder to keep dust and grime out of the action rather better than their competitors. 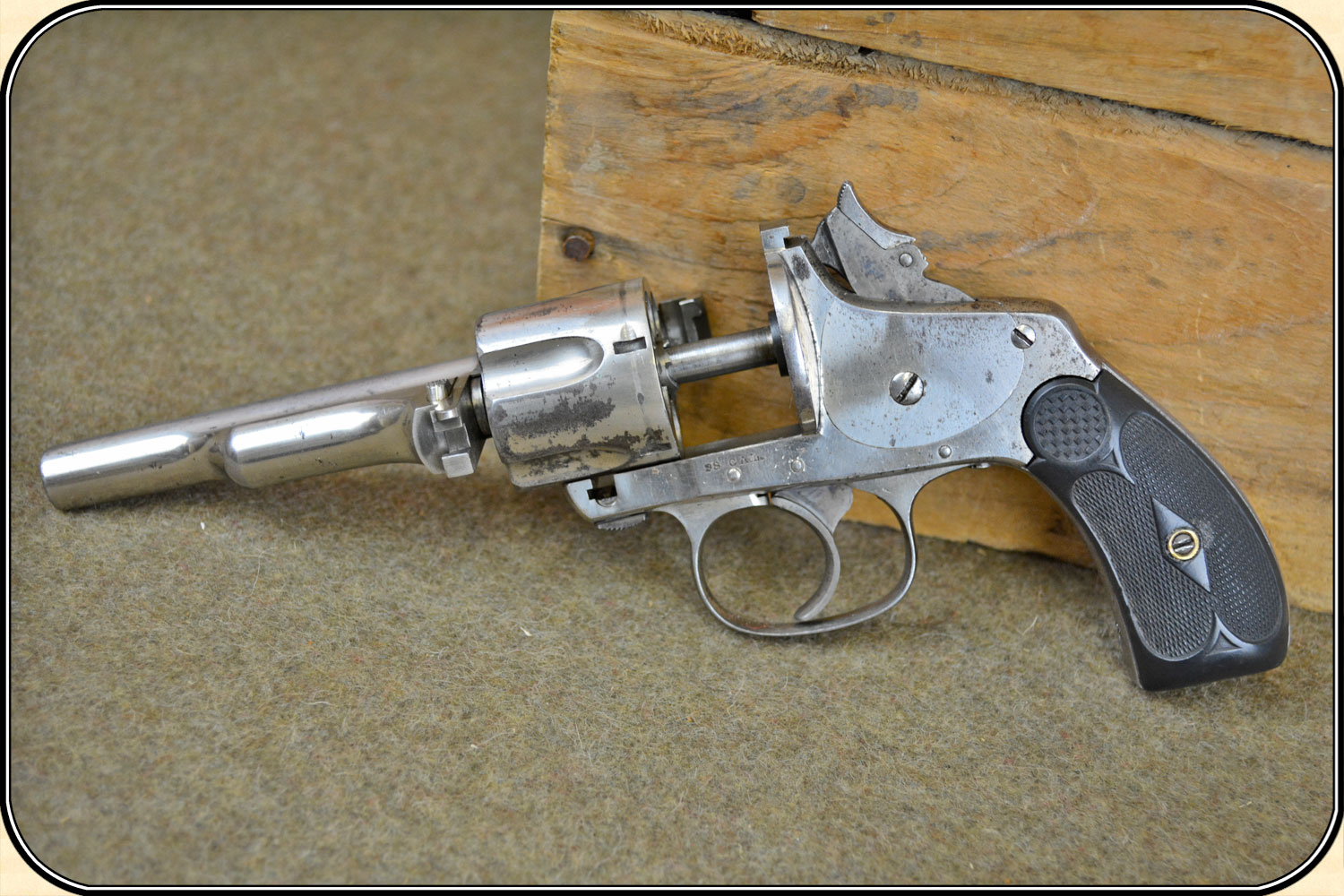 With the action open we can appreciate why this became a preferred design. (Picture courtesy riverjunction.com).

Not only did the Merwin Hulbert revolver offer a convenient way of ejecting fired cases but it also provided the means to change the barrel length of the revolver by substituting a different one. Many Merwin Hulbert revolvers were supplied with two barrels, a short one for concealed carry and a longer one for use in a conventional holster. The animation below shows how the revolver is taken down and re-assembled. 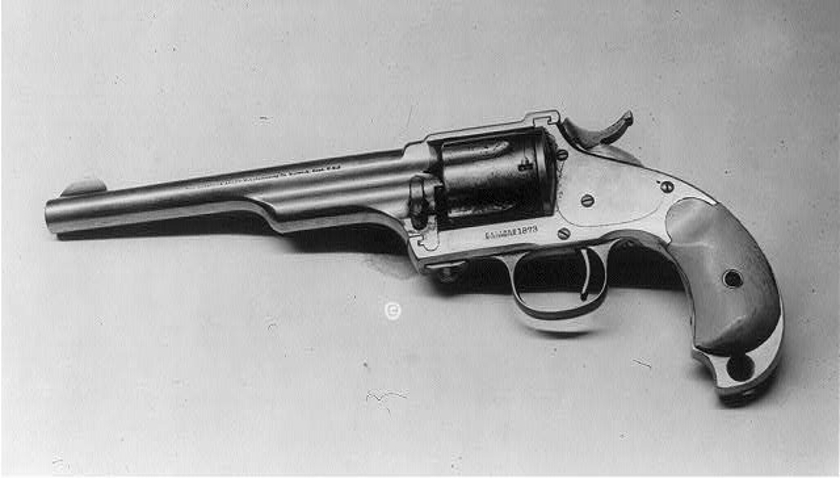 Jesse James Merwin Hulbert revolver of 1873 in .44 caliber is marked as a Hopkins & Allen. Note the “skull crusher” butt. (Picture courtesy Wikipedia and the Library of Congress).

Merwin Hulbert revolvers were made in large frame “Frontier” models, the “Pocket Army”, the “Pocket Model”, the “Small Frame Pocket Model” and a clone of the Smith & Wesson Model 1 called the “Baby Merwin”.

The Frontier Model began life in 1876 as an open top single action revolver intended to compete directly with the Colt 1873. This model was chambered for the .44 Russian in the hope of securing a contract with the Russian Government. The revolver moved through to the 2nd model in 1878 which was similar but chambered for the 44-40 WCF (known as the “Caliber Winchester 1873″). In 1883 the revolver was more extensively modified as the 3rd Model. This version had a top strap and was available as either a single or double action. In 1887 the 4th Model introduced a rib on the top of the barrel and was offered in three barrel lengths 3½”, 5½” and 7″. Prior models had only been offered in 7″. The barrels were interchangeable and many revolvers were purchased with a longer barrel and the 3½” one. This model also had an optional folding hammer.

The Pocket Army was basically a 2nd Model Frontier Model but was available in .44 Merwin & Hulbert, .44 Russian and 44-40WCF. This model was also available with the “Skull Crusher” bird’s beak style of grip with a steel protrusion at the bottom so it could be used for doing extreme nastiness without the need to use ammunition (See the picture of the Jesse James revolver above). The revolver was offered in 3½” and 7″ barrels with the option to buy both and use them interchangeably. The 3rd Model was improved by having a top strap and being offered in either single or double action and was made between 1883-1887.

The Pocket Model was the concealed carry revolver of the series but these revolvers are still quite large by comparison with today’s “concealed carry” handguns. It would seem that the coats worn by gentlemen at the time allowed a large revolver to be carried conveniently in a pocket without the need for a holster. 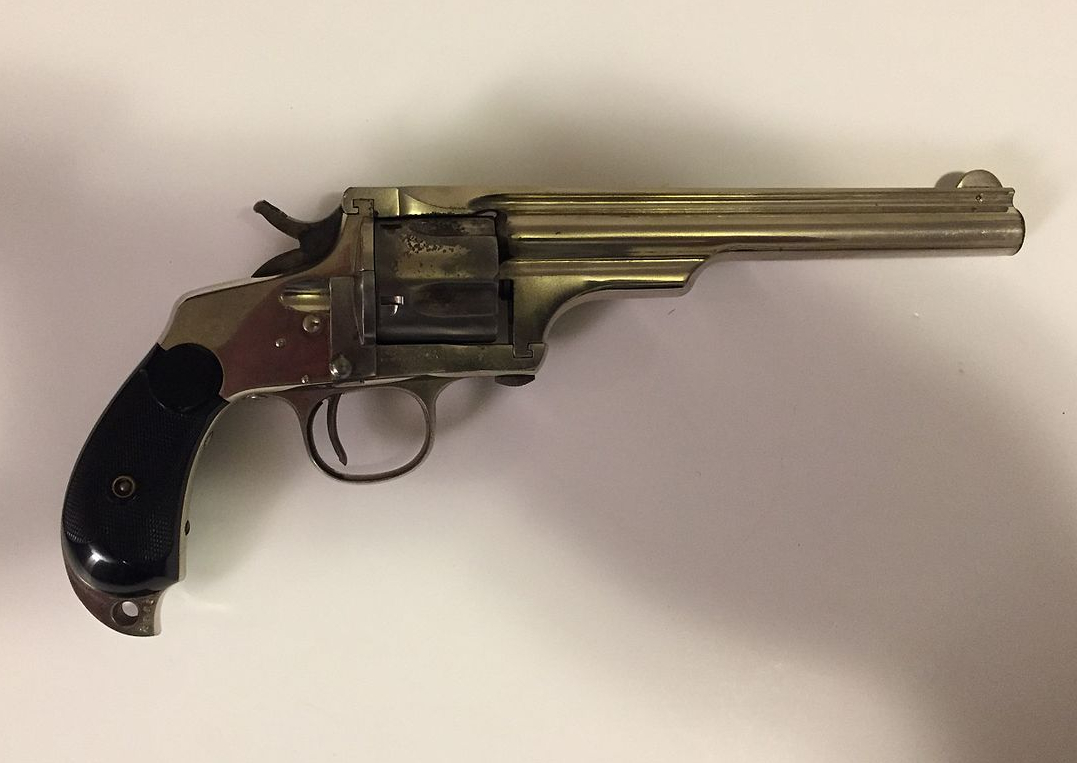 This was basically a scaled down version of the Pocket Model in .32 Merwin & Hulbert and with a five shot cylinder and 3″ barrel.

The Baby Merwin was pretty much a clone of the Smith & Wesson No. 1 made in .22 Short with a seven shot cylinder. This model precipitated a law suit from Smith & Wesson which Merwin Hulbert lost. 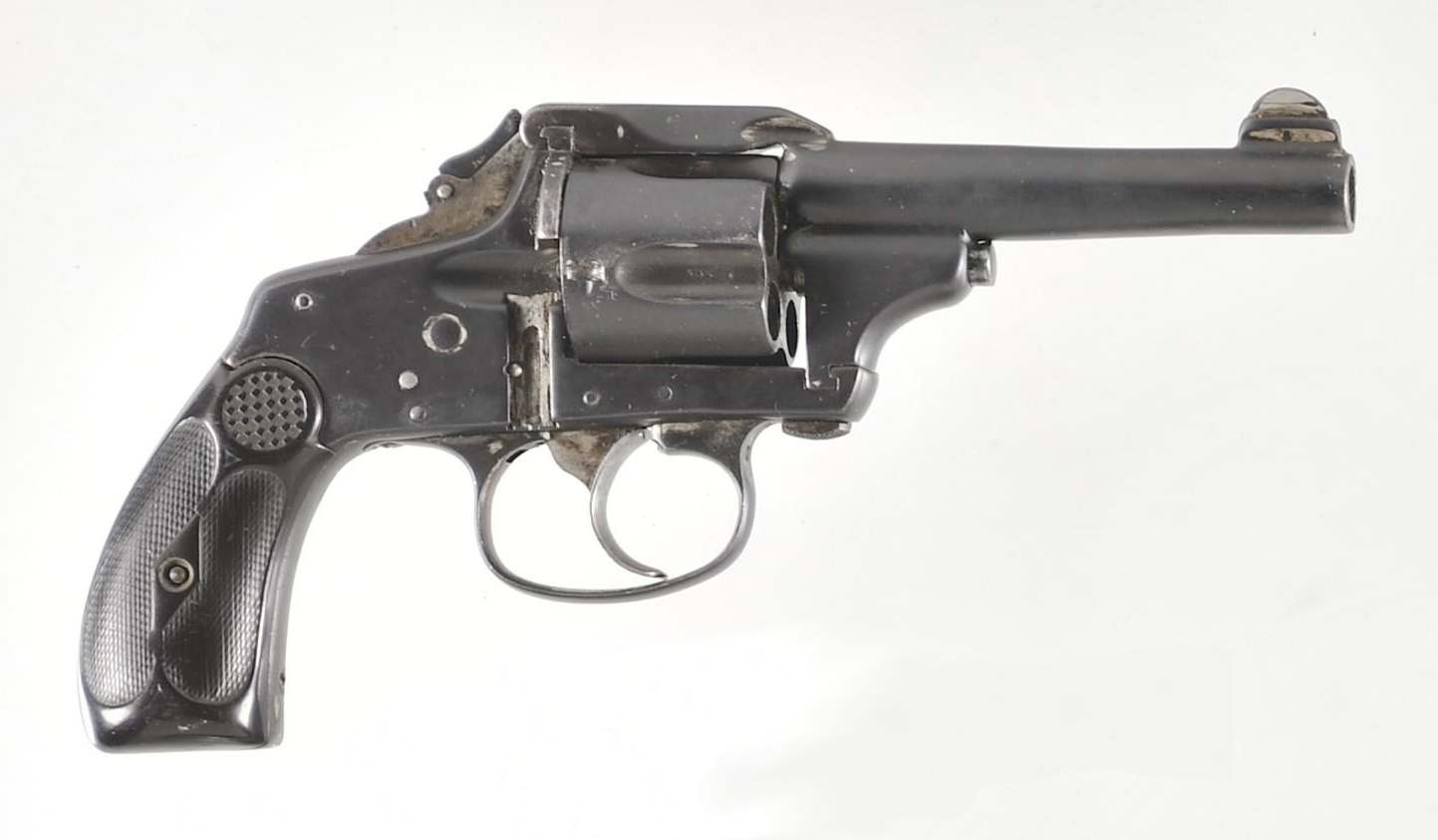 The above Merwin Hulbert style revolver is coming up for sale by Rock Island Auction on 3rd November 2016 and you will find the sale page if you click here.

Merwin Hulbert revolvers come up for sale periodically. You will find quite a number for sale on GunsInternational.com if you click here.

Merwin Hulbert revolvers are a fascinating design and were the revolver of choice for a number of knowledgeable men of the Old West. For the collector of Old Western firearms one of these revolvers is an essential part of a collection.

Below is a review by Forgotten Weapons of some of the Merwin Hulbert revolvers offered by Rock Island Auction in September 2016.

The definitive book on the Merwin Hulbert revolvers is “The Story of Merwin, Hulbert & Co. Firearms” by Art Phelps and you can find it on Amazon if you click here.

(Feature image at the head of this post courtesy riverjunction.com).