The Ariel 4G Square Four engine was a re-design of the previous smaller capacity Square Four engine that had developed an adverse reputation for overheating of the rear cylinders causing deformation of the cylinder heads. So the re-design was intended to resolve that problem. The 4G Square Four engine by Edward Turner is especially interesting in that it effectively combines two twin cylinder engines into one, thus it has two transverse crankshafts. A novel arrangement that seems to have worked well. This engine formed the heart of a 996cc big bike that must be an impressive machine to ride. Engine capacity is in the Harley Davidson class and the big Ariel should be no less impressive than a thirties Harley. Another comparison is that this bike is contemporary with the Brough Superior SS100 and of near identical engine size, but a lot less expensive. So this bike provides a vintage big British motorcycle riding experience at a fraction of the cost of some of the desirable alternatives. 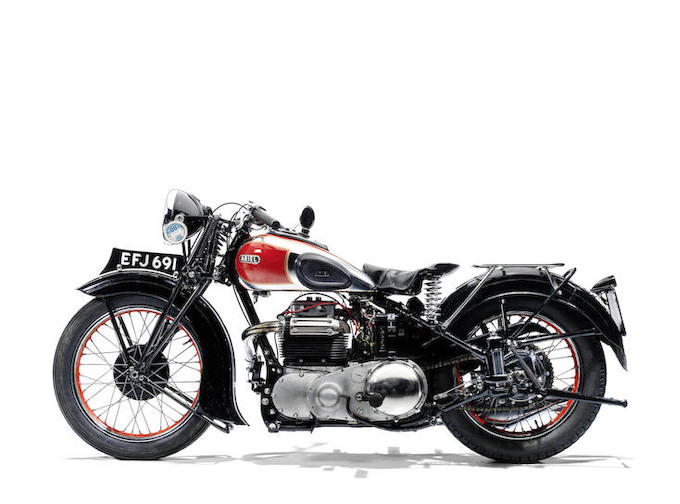 Christened the “Squarial” the bike was designed with side-car use in mind although it would be a wonderful ride without one. Anstey link plunger rear suspension was introduced on these bikes in 1939 and the machine pictured has this.

The Ariel Square Four bikes went out of production in 1959 as demand for large, low revving engines declined in favour of small high revving ones. A fact lamented by Phil Vincent of Vincent motorcyle fame, a man who appreciated the benefits of a large low stressed engine and appreciated the big Ariels.

This 1939 Ariel 996cc Model 4G Square Four is one of a small group of British big bikes that includes such names as Vincent and Brough. We hope it finds a new owner who will truly appreciate it.

As one would expect these bikes sound absolutely wonderful.