If you are young enough not to have experienced the steam era on railroads and railways around the world then you’ve sadly missed something that was just plain special. Thankfully there are still some preserved railroads where you can at least see, hear and smell a steam locomotive in action but that is still a world apart from seeing and experiencing them when they were a part of everyday life. To this day I still think that a steam locomotive counts as the most exciting thing one could ever have the opportunity to drive – period. And of all the steam locomotives ever created I suspect that the New York Central’s Niagara was the single most exciting machine ever created by human beings.

The New York Central Niagara was the last effort by those who really wanted to see steam motive power continue and prosper on American railroads. There were two designs that stand out in the post war era, one was the Pennsylvania Railroad’s S2 steam turbine which was not successful, and the New York Central’s Niagara which was so successful that New York Central’s management were in an awful hurry to scrap them, starting with the most efficient of them all, the single Class S2a locomotive #5500 which was fitted with Caprotti poppet valves.

The New York Central Niagara’s were created by Paul Kiefer, who was the company’s Chief Mechanical Engineer of Motive Power and Rolling Stock. Paul Kiefer was a steam locomotive aficionado determined to demonstrate not only that steam locomotives were competitive with diesel ones, but he actually set out to create a steam locomotive that was superior. To the astonishment of New York Central Railroad’s management and most everyone else in railroad management at that time he succeeded. The technology employed by Paul Kiefer shows an impressive understanding of what was needed to create a diesel beating steam locomotive. For those of a technical mindset the article “The Making of a Legend – The Niagara Story” by Thomas R. Gebracht is the reference to read. You will find it free in PDF format if you click here.

Paul Kiefer was the American contemporary of French steam locomotive designer André Chapelon. Like Chapelon, Paul Kiefer took a detailed analytical approach to design. André Chapelon tended towards the use of double expansion compounding to extract the maximum energy from the steam created in the boiler, much as was done with reciprocating marine engines. Paul Kiefer adopted the “KISS” principle (i.e. Keep It Simple Stupid) and worked to ensure the most fuel efficient generation of steam, minimizing of friction by extensive use of roller bearings, and the British method of not only counter balancing the wheels and connecting rods on each side of the locomotive but cross-balancing across both sides. Paul Kiefer chose not to use compounding which requires the use of multiple cylinders but instead kept to the simple American two cylinders set up but made that system as efficient as possible. The intention of this was of course to keep maintenance to a minimum and reliability to a maximum. Interestingly in his last steam locomotives André Chapelon did the same thing and moved away from compounding to efficient single expansion designs.

As they rolled out of Alco’s workshops the new Niagara locomotives were put to work hauling the increasingly heavy passenger trains of the post war period. The Niagara had been created in the first place because train weights had become progressively too much for the New York Central’s tried and tested Hudsons. So the big name trains such as the “Twentieth Century Limited” and the dozen daily trains from New York to Chicago, “The Chicagoan”, “The Commodore Vanderbilt”, and “The Empire State Express” were all being hauled at typical one hundred miles per hour speeds along the Central’s “Water Level Route”. This was what these engines had been designed for and they did it with efficiency, economy, and with the impressive sights and sounds that only a steam locomotive can deliver. They did their work so well that Paul Kiefer was able to convince management at New York Central to run objective comparison testing of these locomotives against their diesel competition. It is likely that neither New York Central’s management nor the manufacturers and sales staff of the diesel locomotives were prepared for what was about to happen. They assumed that the diesels would win.

The testing of the New York Central Niagaras was in two stages. First they were evaluated without being in a direct comparison with diesels. The locomotives selected for this were #6023 and the poppet valve equipped #5500. Comparisons were also made between those two and the first Niagara #6000 which had been retro fitted with a new carbon steel boiler, that boiler giving some indications that it was a better design but as the testing was not being done under the same conditions that notion was not conclusive. By the time they had completed their testing Paul Kiefer and his team realized that they had created the most efficient two cylinder steam locomotive in history.

The second stage was a series of trials to include not only fuel efficiency but locomotive availability, keeping to schedules, and cost per drawbar horsepower. The table below comes from Wikipedia and provides a neatly understandable comparison.

As can be seen from this the Niagaras set a new standard for steam locomotive performance and did rather better than just keeping up with their diesel counterparts. This did not however assure them of a future. Seen as relics of the past the Niagaras were progressively removed from the prestigious name trains such as the Twentieth Century Limited and relegated to lower status trains to serve out their years until they could be replaced by diesels and scrapped.

By July of 1956, ten years after their building, the last of the Niagaras was retired and sent for scrapping. With their passing the last and greatest of American steam perished leaving the “modern” diesels to haul the great trains. But the end of the steam age heralded the coming end of the railroads and the New York Central would be forced to merge with its arch rival the Pennsylvania Railroad to form Penn Central in a last ditch effort to stave off the inevitable demise of both.

With the end of steam something of the soul of America passed away. The “Iron Horse” that had opened up the nation was no more, replaced by the truck and private car. Those old enough to have experienced and loved the steam age lament its passing. Those too young to remember wonder why we miss those “dirty and inefficient” machines. Interestingly we still live in a steam powered age. The electricity that powers the trains, industries and homes is all steam generated, either by coal fired steam turbine or by the use of a nuclear reactor as the boiler to run the steam turbines. The navy’s ships are mostly steam turbine, certainly the fastest ones, and the nuclear powered ones. So we haven’t moved on from the age of steam just yet, and we aren’t likely to in the near future.

As for me I have fond childhood memories of being taken to one of the big railway stations in London, England, where I grew up. My dad used to buy us a penny platform ticket and we’d go and see one of the name trains such as the “Orient Express” or the “Golden Arrow” and wonder about the exotic places it was going to be going. Dad would get chatting with the engine driver and fireman and before long we’d be invited up into the cab to see and feel the fire, smell the coal and steam, before we had to get down again. And we’d wave and watch as the steam valves were opened and the big locomotive would chuff and blow and haul the train off for its adventure.

A New York Central Niagara at the head of “The Chicagoan” must have been an impressive thing to watch as it made its way out of Central Station. 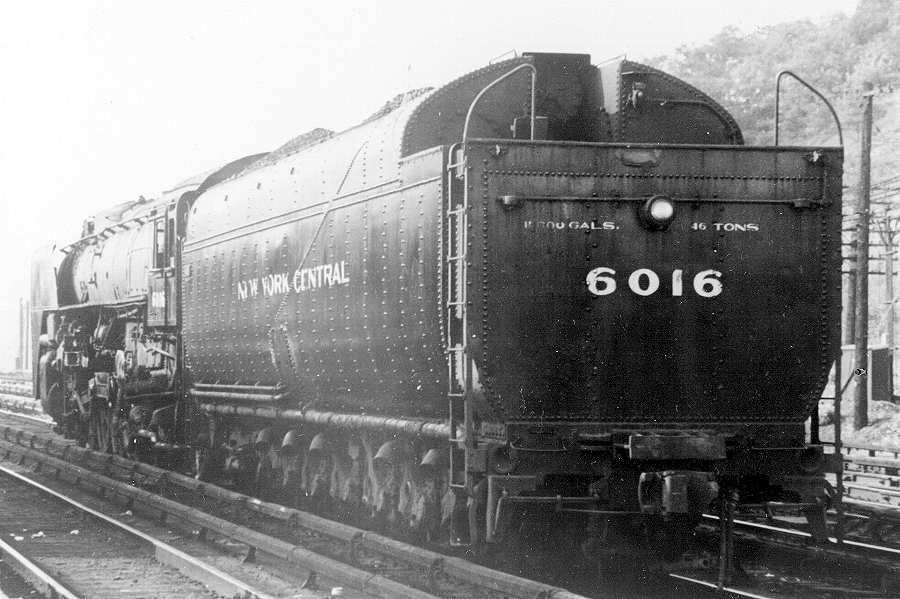 (Feature image at head of this post courtesy steamlocomotive.com).