The Car That Made Good in a Day: Stutz Beginnings

Harry Clayton Stutz had a business called Stutz Auto Parts Co. but, like so many young men, he wanted to move from making auto parts for other cars to making cars of his own. To this end he built a racing car of his own design with one of his transaxles, and fitted it with one of the most advanced engines available at that time, a 389 cu. in. in-line four cylinder Wisconsin which featured a “T” head but with double valves (i.e. four valves per cylinder. His plan was to race it in the Indianapolis 500, and the car was built in less than five weeks

A racing car needs a catchy name so Harry Stutz named it the “Bear Cat” and entered it into the Indianapolis 500 race just to see how good, bad or indifferent he could do. The car was driven by Gilbert Anderson with mechanic Frank Agan along for the hair raising ride. Quite likely to Harry Stutz’s surprise, and to the surprise of many at the Indianapolis 500 of 1911, Harry’s car not only finished the grueling race, but finished it in eleventh place. 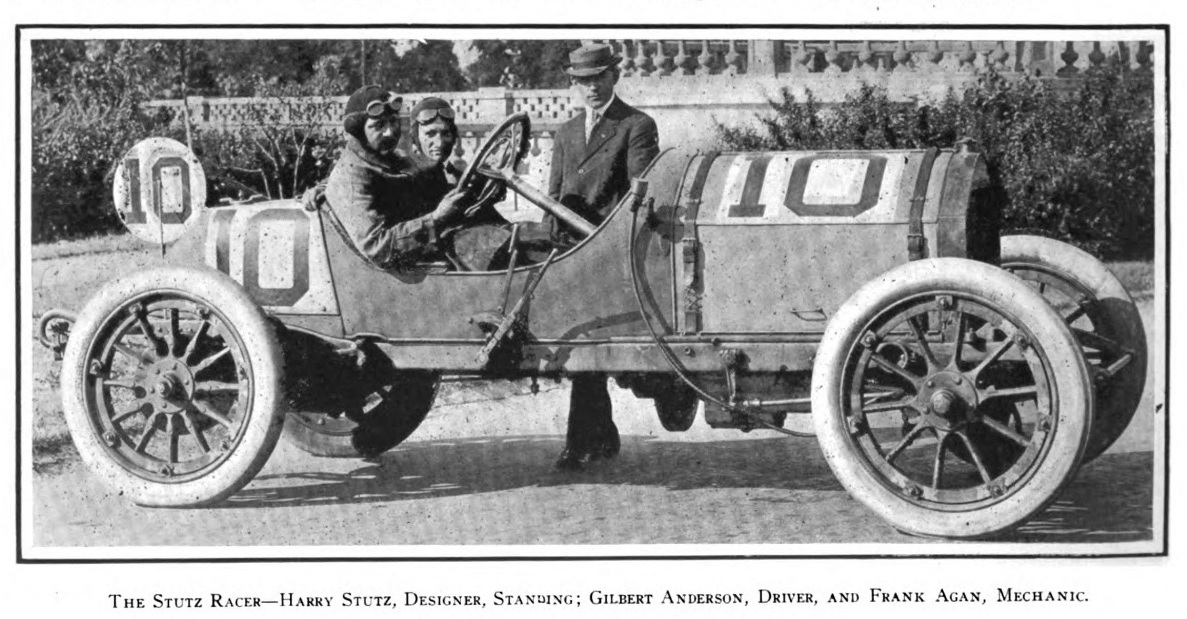 The car was described as “The car that made good in a day” and Harry Stutz found that there were people expressing an interest in owning a car just like the one he had raced. This sounded like a plan to Harry Stutz and so he got together with a friend named Harry Campbell and together they established the “Ideal Motor Car Company” in June 1911 and began making cars like the Indianapolis car but fitted with fenders and lights for road use. The two Harrys decided to sell the cars under the same name as the car raced at Indianapolis, so the cars were sold under the name Stutz Bearcat, and promptly entered the annals of classic car history.

Understanding that it was through his performance at the Indianapolis that his car company had been established and was flourishing Harry Stutz decided to create a factory racing team which he called the Stutz White Squadron. They won the National Championships in 1913 and 1915, after which time Stutz decided to withdraw from racing.

It was during this time of turmoil that a new model, the Stutz Speedway Four was introduced in 1922. This car was to be the replacement for the aging Bearcat which was phased out of production in 1925 as Stutz embarked on a new direction.

In 1923 it was arranged to bring in a man named Frederick Ewan Moskowics to save the company and his first action was to assess the company’s strengths and essentially re-invent Stutz for the new era of the 1920’s. Moskowics’ new direction for Stutz was to move towards becoming a maker of fast luxury cars that would essentially be the American answer to Britain’s Bentley. Stutz had a strong reputation for being a leader in technological advancement and Moskowic could see that being developed and used to great advantage.

Swiss engineer Charles Greuter was brought in to design a new car, a car that would outdo the best the Europeans could manage. He was given a US$1,000,000 budget with which to get the car designed and the manufacturing tooling set up. Greuter created a new straight eight engine which was called the Vertical Eight. This was a SOHC 287 cu. in. (4.7 liter) and it was fitted in the new car, the “AA”. The new car made its debut in 1926 and it was fitted with four wheel hydrostatic brakes by Timken, which turned out to be horrendously temperamental and which would later be upgraded to Lockheed hydraulic brakes, a wire reinforced windscreen, and a low profile made possible by the use of under-slung axles and a Timken worm-drive transaxle. The new Stutz AA was joined by a Speedster stablemate called the Stutz Blackhawk.

The new cars were put into motorsport competition both to provide the hard road testing that racing provides and also to start racking up victories so as to boost the Stutz “street cred” and thus boost sales. Competition indeed exposed a weakness in the engine. When run at high revs for long periods of time the valves would overheat. By this time the engine capacity had been increased to 298 cu in (4.9 liters) and Moskowic sought the help of none other than Ettore Bugatti and with his technical assistance the cylinder head was redesigned beginning with larger ports and raised compression ratio. In addition to this the intake and exhaust manifolds were redesigned as was the carburetor and the entire exhaust system. The newly modified engine was called the Challenger because that was what it had been created to do, to challenge all competitors, and hopefully to prevail. Prevail it did and in 1927 the Stutz won the AAA Championship, winning every race. It looked like it was time to travel across the pond to France and take on the Bentley Boys at the 24 Hours Le Mans.

It was a wealthy Frenchman named Charles Weymann who took his Stutz BB with the 4.9 liter straight eight engine to his native France to compete in the world’s most presitgious motor race, the 24 Hours Le Mans. Weymann was the creator of the Weymann fabric coachwork often found on luxurious Stutz automobiles of this period. Weymann’s car was driven by Robert Bloch and Edouard Brisson and it led for most of the twenty four hours of the race, only being forced to drop back when top gear failed ninety minutes before the finish. Despite that the Stutz finished in second place to the 4.5 liter Bentley driven by the “Bentley Boys” Woolf Barnato and Bernard Rubin.

The 1928 Stutz BB was the car that came closest to a Le Mans victory and an American car would not better its second place on the podium until 1966. The Stutz BB had been created to be a car that would be at least as quick and reliable as the Bentleys, which Ettore Bugatti described as “The fastest truck in the world” and had it not experienced a top gear failure towards the end of the race it very likely would have beaten the Bentley Boys on their home turf. All that aside however the Stutz BB was arguably the ultimate Stutz, the iconic American straight eight, a car that was at least equal, and arguably better, than most of the luxury cars emanating from Europe and the United States. It packed the smoothness and sophistication of a Rolls-Royce with the speed and durability of a Bentley.

In the years following 1928 luxury car buyers would become caught up in the fashion for more and more cylinders in car engines on the notion that more cylinders would make an engine smoother and more powerful. Stutz never got into the cylinder race but instead kept on gently refining their straight eight with its dual ignition system until they ceased business in 1935. At that time the value of the company’s assets still exceeded its liabilities, but the decision was made to wind up the company anyway.

The Stutz BB is one of the great cars of the twentieth century and it is the car model that came closest to giving the United States a Le Mans victory over the British. It was a highly sophisticated and dignified automobile that combined quiet refinement with unrivaled power and speed.

The “battleship gray” 1928 Stutz BB Four Passenger Speedster in our photographs has an interesting history of its own having been commissioned by the government of Finland with coachwork by Philips Custom Body Co. of Warren, Ohio, who did a significant amount of coach-building work on Stutz rolling chassis. This particular car is believed to be the only phaeton body done by Philips for Stutz in 1928.

The car was used by the government of Finland for dignitary transport and parades until 1960 when it was sold to Heikki Vilamo. He used it for vintage racing from 1965-1967 in Finland, Sweden and Germany before putting the car in storage in 1969, where it remained until 1994.

In 1994 the car was purchased by American businessman Roy Malool who shipped it back to its homeland and after driving in once he placed it in climate controlled storage where it remained until 2016 when it was sold to the current owner.

The car was treated to some extensive maintenance by Bob Waller at Classic Auto Services in New Hampshire. This work included:-

Additional work was done by John Gruner who made a reproduction aluminum Zenith carburetor based on the original and rebuilt the vacuum fuel pump. George Holman of Holman Engineering manufactured and installed a new water pump spindle.

This car is coming up for sale by RM Sotheby’s at their Amelia Island auction to be held over March 8th-9th, 2019.

The car is being offered without reserve and represents an opportunity to own not only a Stutz, but a highly original example of what might well be described as the ultimate Stutz, an American icon.

Alternatively, for those wanting to learn more about Stutz automobiles the book “The Splendid Stutz: The Cars, Companies, People, and Races” (Published 1996) by Charles and Dale K. Wells et al Betts is highly recommended.