One of the more rare and interesting variants of the Colt 1911 is the one made specifically for the ISSF (International Shooting Sports Federation) Centre Fire target match. The pistol was made for international export to countries where firearms laws may be highly restrictive, limiting calibre and magazine capacity. The pistol was also made to provide a specialised and highly accurate target pistol for US and Canadian shooters participating in the ISSF Centre Fire match. It’s a pistol that is near to my heart as I owned one and competed with it during the early seventies so I have personal experience shooting it competitively and reloading for it. 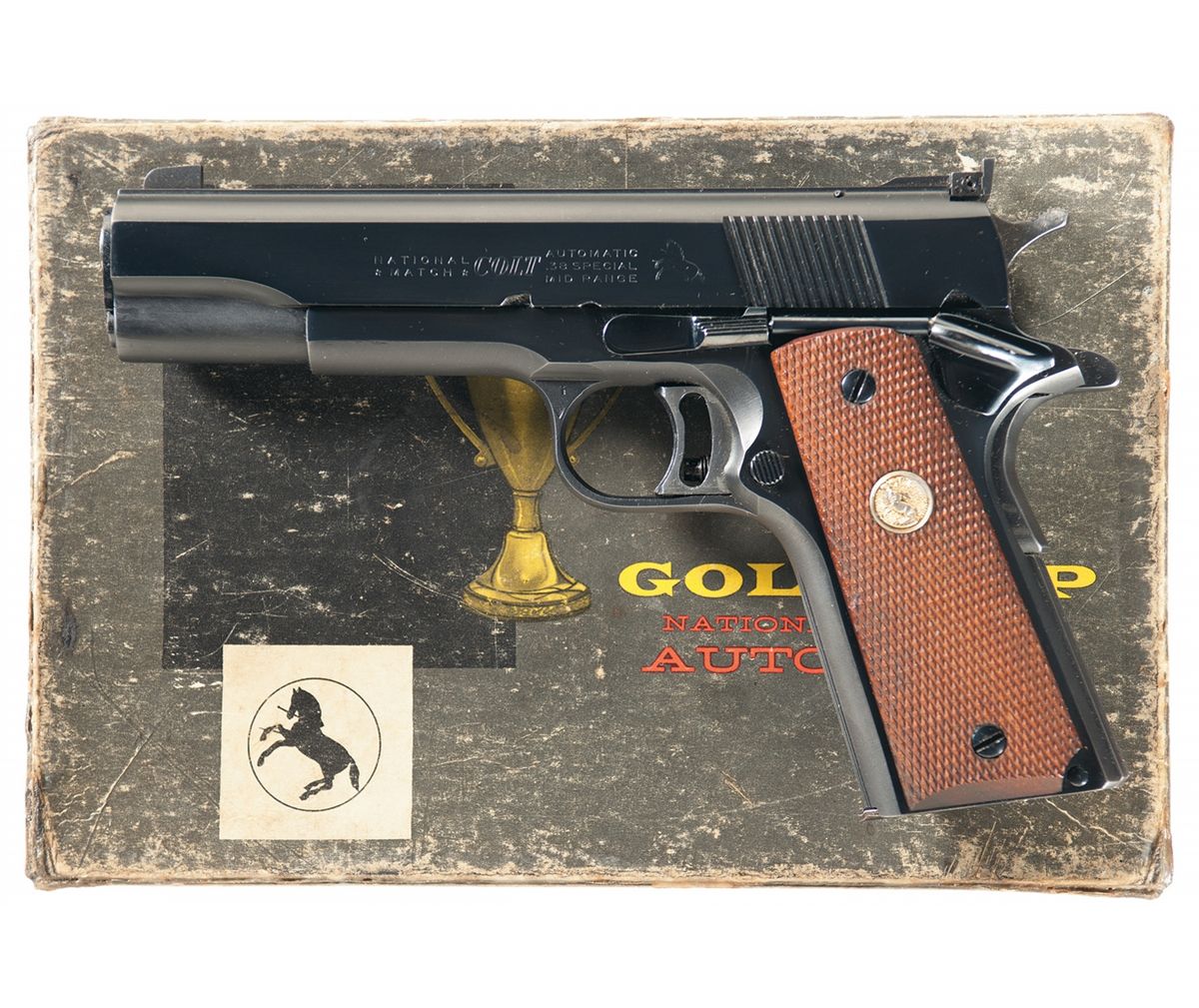 The pistol looks as good as new although the condition of the box gives its age away. Good things come in old packages. (Picture courtesy icollector.com)

The Colt Gold Cup National Match .38 Special Mid-Range was not a conventional Colt 1911. Everything was done to maximise accuracy. In addition to the tighter tolerances we expect to find in Colt Gold Cup National Match pistols Colt decided to eliminate the potential accuracy problems that can be created by the normal Browning recoil operation by eliminating it. When a Browning action operates it recoils a short distance before the toggle linkage beneath the breech of the barrel trips and pulls the rear of the barrel downwards, unlocking it from the slide and aligning the breech with the magazine. The Browning action requires that the barrel be moved out of alignment, and that introduces a potential for misalignment to the detriment of accuracy. In the .38 Special Mid-Range version the top of the barrel did not have locking lugs to engage in the slide and the toggle beneath the barrel did not pull the rear of the barrel down. Instead the pistol functioned as a simple blow-back action, the advantage of this being that the barrel could be kept in alignment throughout the cycling of the action. The disadvantage of this was that the magazine needed to align the cartridge at as close to that barrel line as possible. This problem was exacerbated by the flat nosed shape of the .38 Special Mid-Range wadcutter ammunition that had to be used. 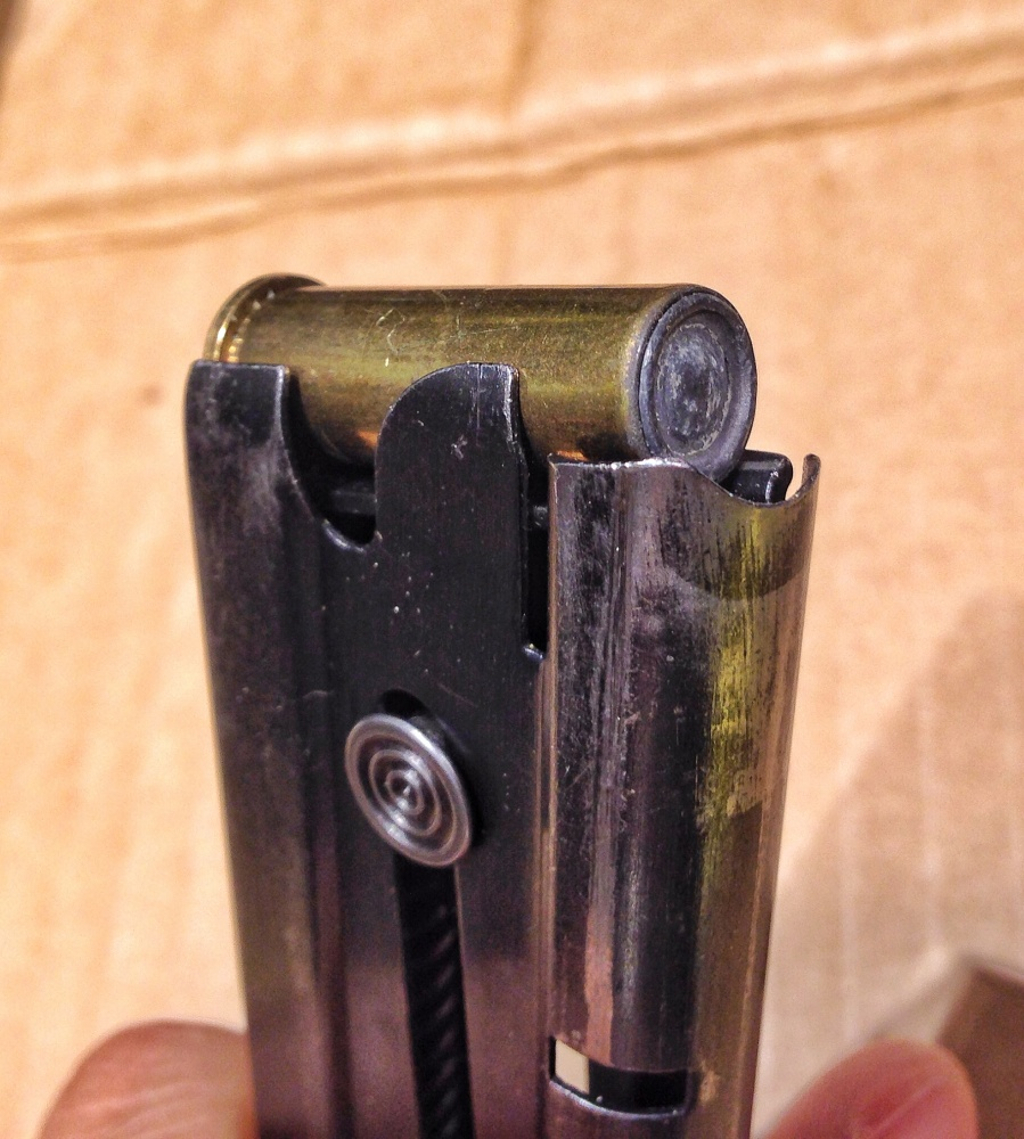 A .38 Special Mid-Range wadcutter cartridge in the magazine of the Colt Gold Cup. The flat nosed cartridge even with a roll crimp is not going to feed reliably unless alignment is near perfect. (Picture courtesy thefirearmblog.com)

The result of all this was a pistol that was indeed highly accurate but very finicky about what it would feed reliably and what it wouldn’t. Some factory ammunition would feed OK, Winchester being one that would. And some just wouldn’t, the Canadian Dominion being an example. 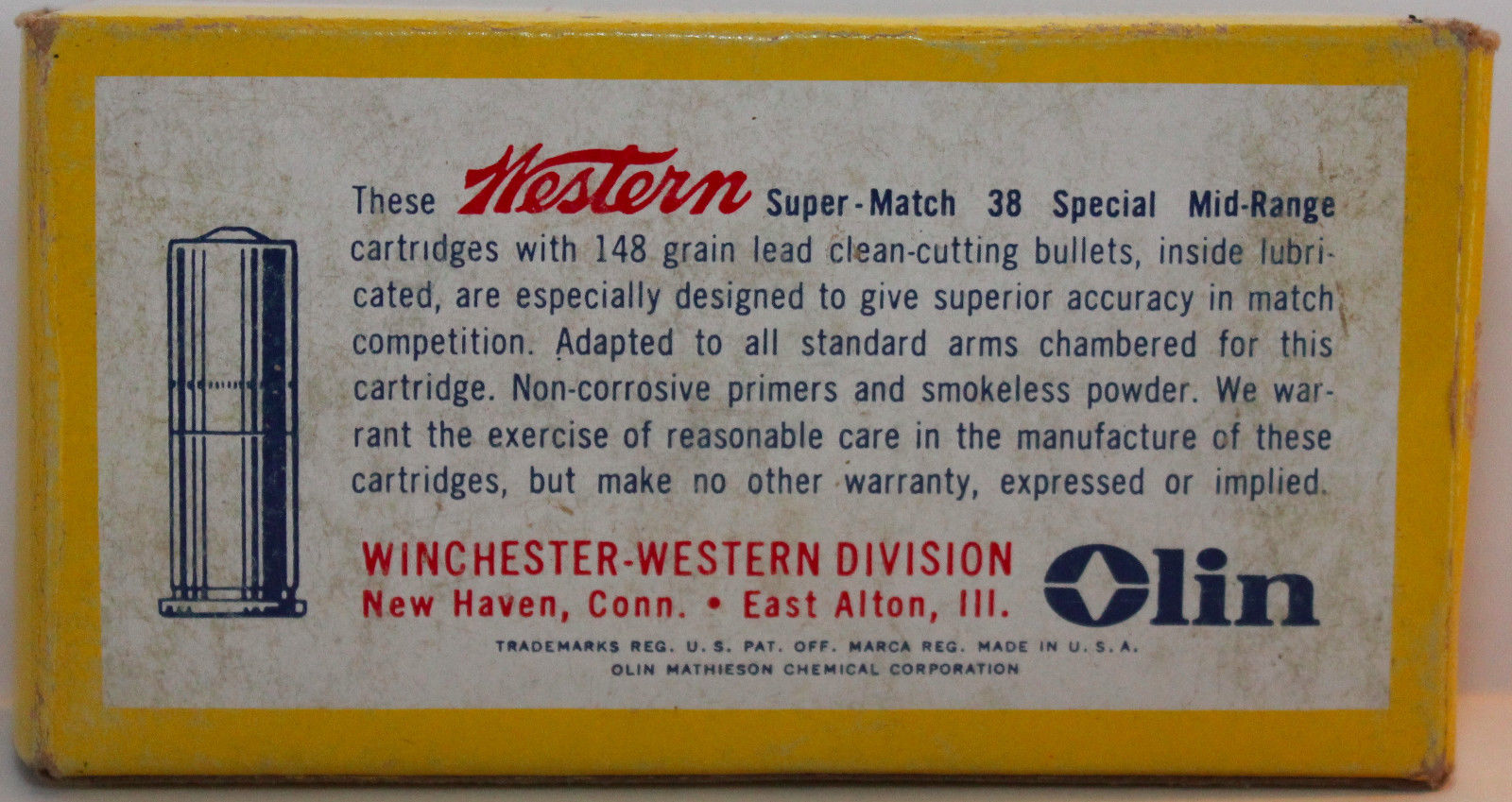 However, in my experience in order to get reliable feeding with this pistol, and to maximize accuracy, one had to reload. To get one of these pistols really working well there are four simple things I learned to do that produced the results I wanted.

For me I found that swaged 148grain hollow base wadcutter bullets produced the best results. The bullets I used to use are long out of production so, if I were setting up one of these pistols again, I would likely try the Lyman #358091 150grain wadcutter bullet. It is listed as being made from Linotype alloy (84% lead, 4% tin, 12% antimony, producing a Brinell Hardness Number of 22). As for powder I settled on Red Dot, but the Lyman 49th Edition Reloading Handbook lists Titegroup as producing best accuracy in their testing. Be prepared to try a few different bullets and powder combinations in order to find what works in your pistol. That’s a large part of the fun of reloading.

The Lyman Reloading Handbook, 49th Edition can be found on Amazon if you click here.

One of the common questions people ask if they are blessed in having one of these pistols is “where can I get a spare magazine or two”. Magazines are available, Brownells make them. You’ll find them listed on Brownells web site if you click here. 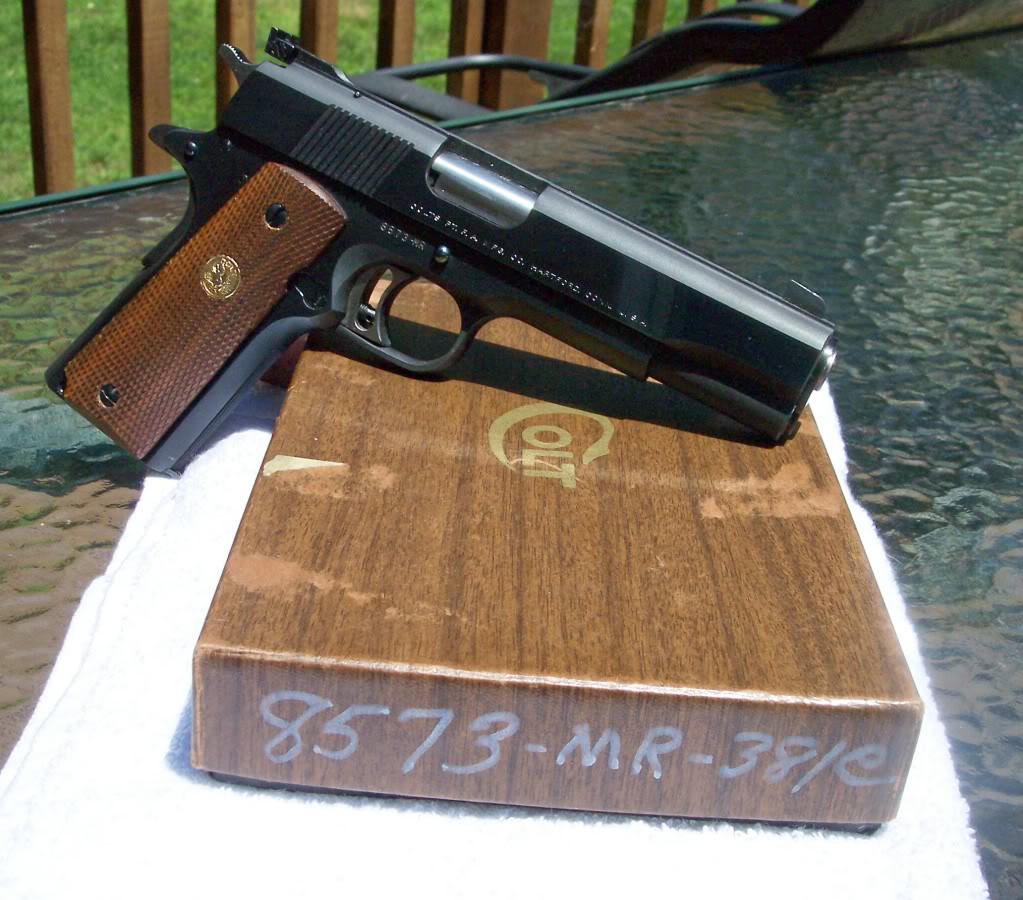 This Colt is identical with the author’s Gold Cup, complete with deep polished bluing on the sides and frame, matte finish on top, and Colt-Elliason sights and rib. (Picture courtesy [email protected])

In 1965 Colt introduced the Colt-Elliason sights and rib which improved the sight picture and provided precise click adjustment. Adjustment was a quarter of an inch at 25metres per click. Author’s pistol was manufactured around 1969-1970 and so this is how it was equipped.

These pistols were purpose designed for the ISSF Centre Fire target shooting match and are best used in that environment although they are great fun to shoot and to tinker with. Collector values on them can be moderately high. You can get an idea of what a good one might be worth if you look at the listing here.

These Colt M1911 Gold Cup National Match .38 Special Mid-Range pistols are a delightful pistol to shoot and a challenging one to get performing at their best. If you are looking for a peak accuracy 25metre pistol for target shooting then they are still a good choice despite their age. 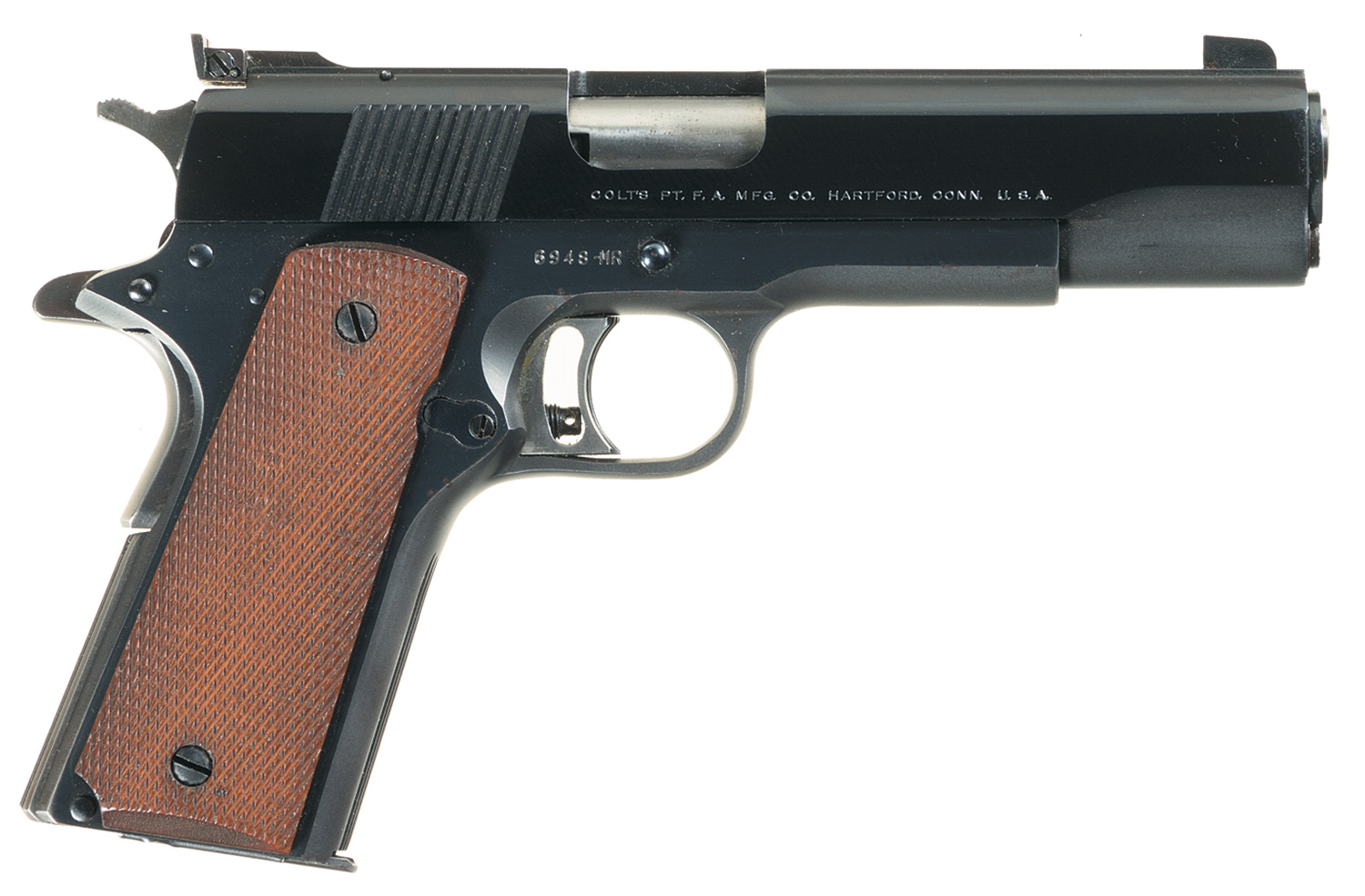 (This picture and the feature image at the head of this post courtesy rockislandauction.com)