On Beretta’s 490th Anniversary we celebrate almost five hundred years of Beretta firearms. Beretta have used that four hundred and ninety years to establish a reputation for quality and imaginative designs, yet Beretta’s designs are kept simple and reliable. With the Beretta M92 established as the US Army’s main pistol in this post we will look at the M92’s daddy, the M1951, one of the best single action automatic pistols ever created as we say “Happy 490th Anniversary Beretta”. 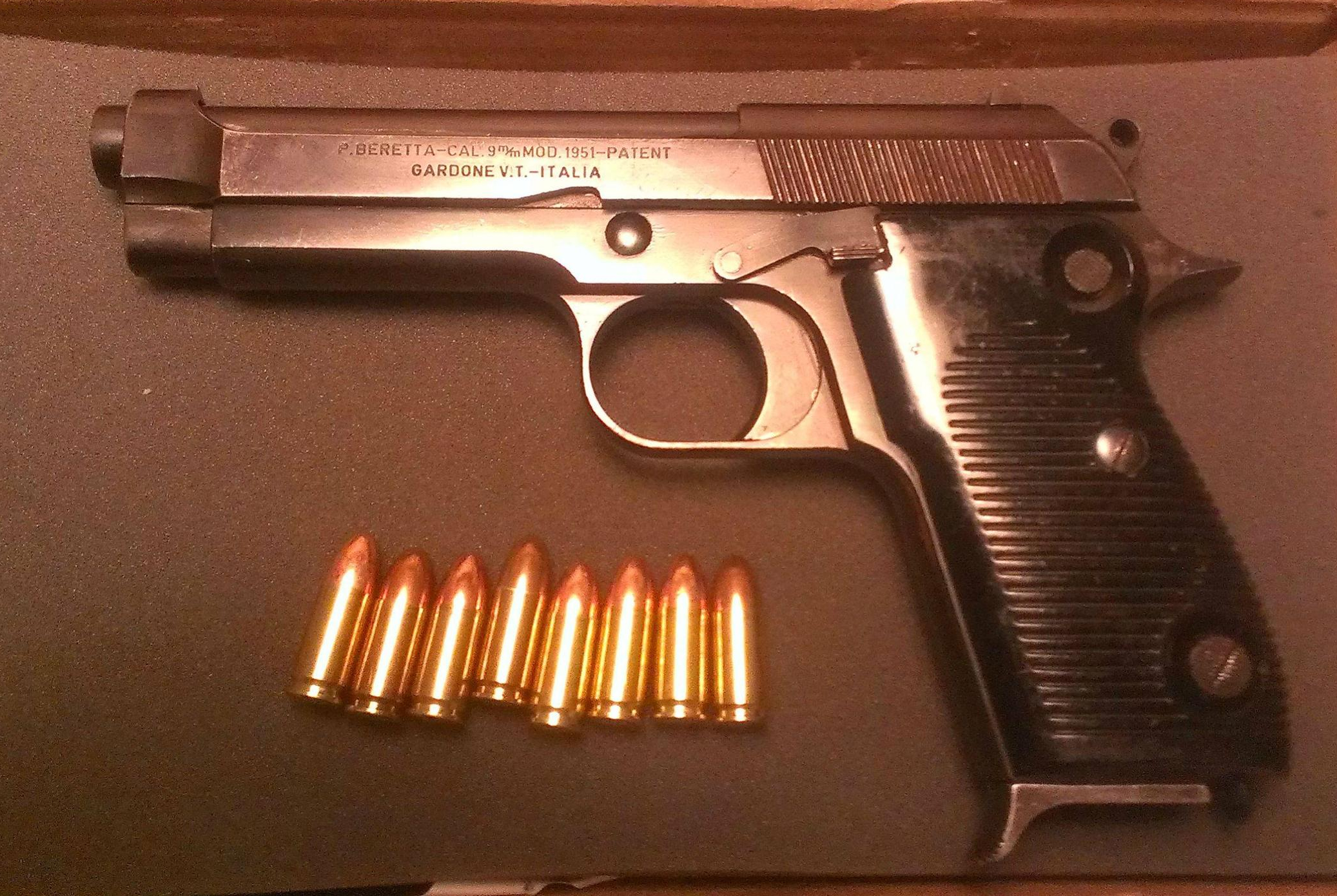 In designing their M1951 Beretta demonstrate their ability to not only make a pistol work well, but to make it visually attractive at the same time. (Picture courtesy [email protected]).

Development of the Beretta M1951 began sometime during the late 1940’s in post World War II Italy with the design being finalized in 1951. Beretta design engineer Tullio Marengoni is credited with the design. With the emergence of the North Atlantic Treaty Organization and the need to standardize on small arms calibers and ammunition Italy had more reasons to create a new pistol than just simply to upgrade the sturdy and reliable Beretta Models M1934 (Army, chambered for the 380ACP known to Italians as the 9mm Corto) and M1935 (Navy, chambered for the 32ACP). NATO was to standardize on the German 9mm Parabellum chambering and so Beretta created a 9mm Parabellum pistol that used a Browning style locked breech design. 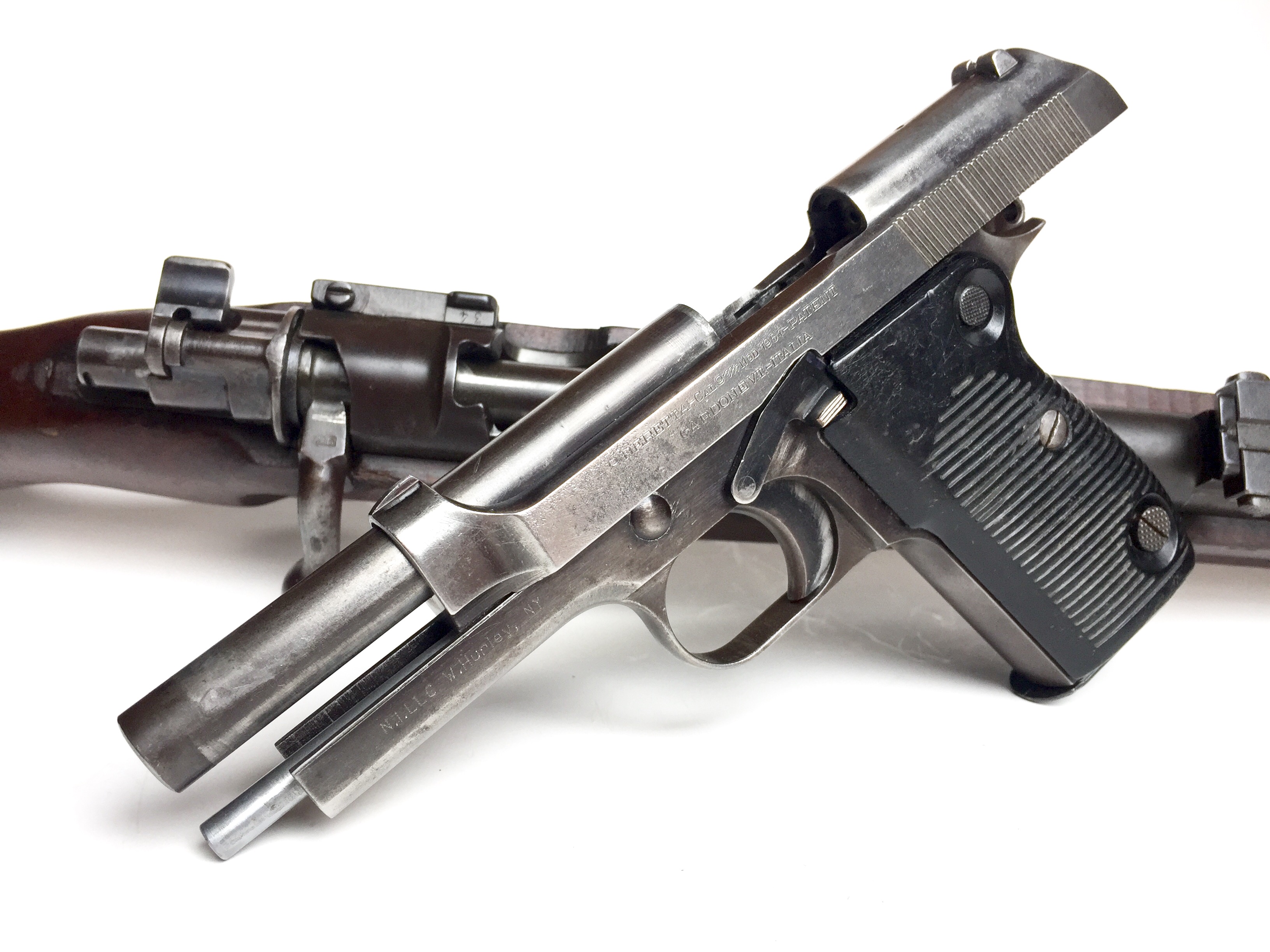 With the slide locked back the characteristic angle of the John M. Browning can be seen, This particular pistol is an Israeli model of the M1951. (Picture courtesy myvimu.com).

The actual operation of the Beretta M1951 does not use locking lugs on the top of the barrel as in John M. Browning’s M1911 pistol but instead the locking lugs are placed on the sides of the breech end of the barrel and lock into recesses in the side of the pistol’s frame. The principals of the pistol’s operation are basically the same though. On firing the barrel and slide are locked together and begin to recoil together until a locking piece located under the barrel is unlocked by a sliding pin causing the breech end of the barrel to be moved downwards unlocking it from the slide which continues rearwards ejecting the spent cartridge case and continuing to its rear stop. The under barrel spring then forces the slide forwards stripping a cartridge from the magazine and chambering it, driving the barrel forwards and the locking piece so the locking lugs on the sides of the breech engage in the recesses in the sides of the slide so the pistol is ready to fire again. 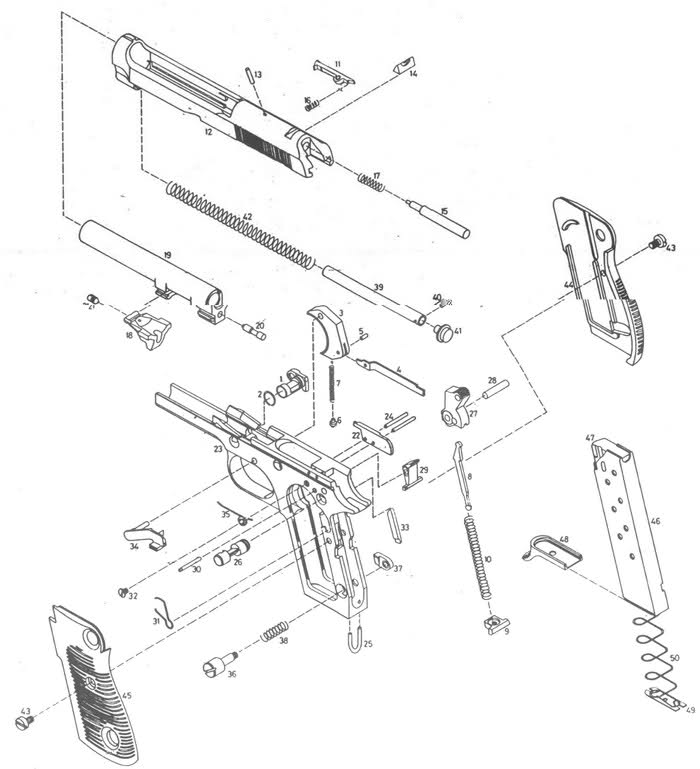 Early models of the M1951 featured an alloy frame which proved to be insufficient in the long term to handle the power of the 9mm Parabellum cartridge. This led to the alloy framed version being replaced by a “Second Series” M1951 with a steel frame. This pistol had no problems with durability and proved itself to be especially reliable in desert situations such as in the Middle East  where Egypt, Iraq and Israel adopted it. The M1951 has a single column 8 round magazine and the safety catch is a crossbolt style which blocks the hammer visible at the top right side of the grip in the picture below. 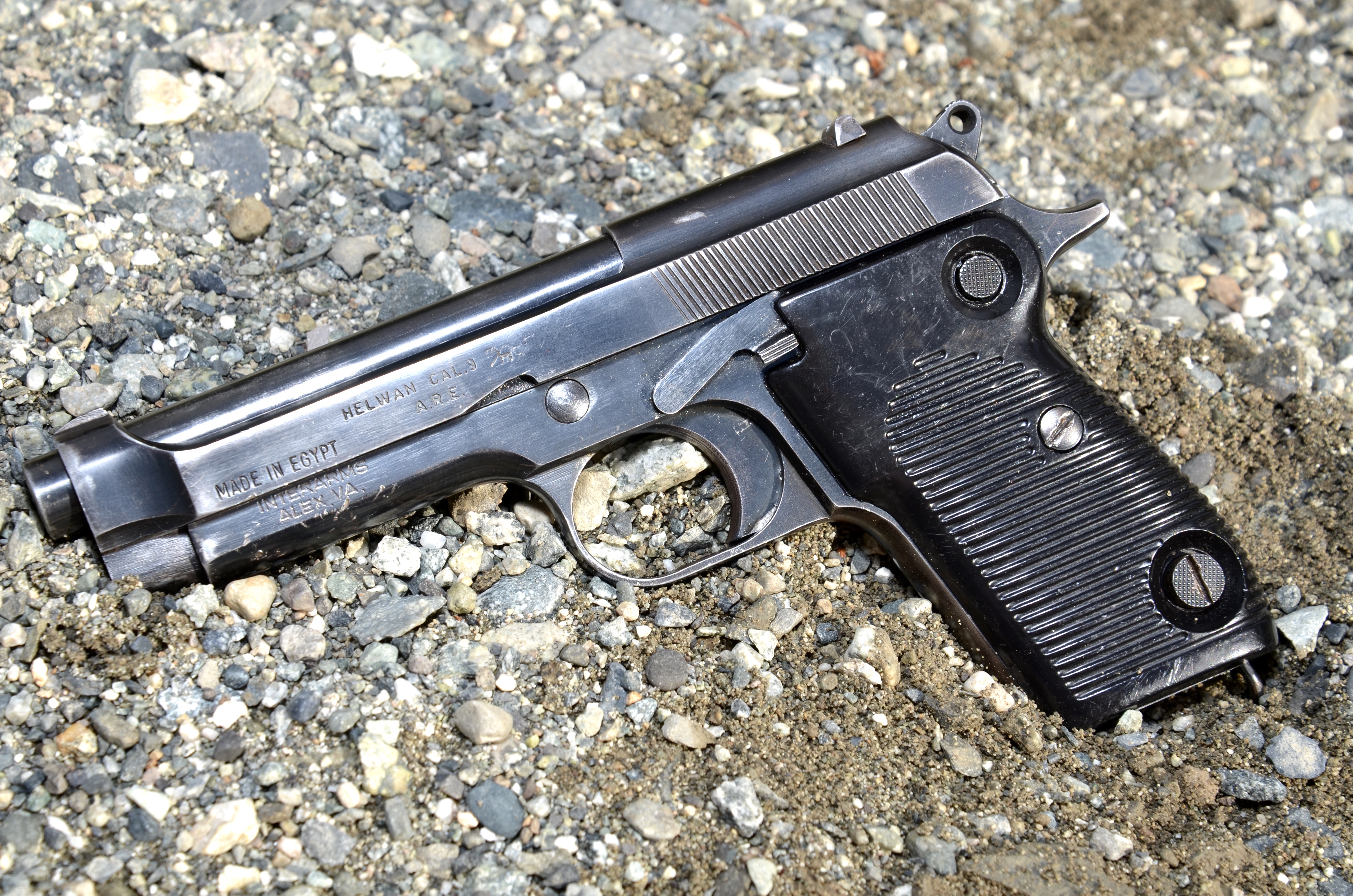 The Egyptian version of the M1951 was called the Maadi Helwan Brigadier whilst the Iraqi version was called the Tariq. These pistols made in Egypt and Iraq were exported to many Middle Eastern countries and are quite ubiquitous. The open top breech of the Beretta M1951 like the open top Beretta pistols that came before and after it have a good reputation for reliability in ejection because of this (as long as the extractor is not worn out of course).

On the Italian civilian market the pistol could not be sold in 9mm Parabellum because Italian law forbids her citizens from owning any pistol chambered for a military cartridge. Beretta made a civilian sporting version of the M1951 in 7.65x21mm and this was designated the M952 “Sport” and M952 “Target”. These are amongst some of the nicest versions of this pistol to obtain as they are of commercial quality.

Although Beretta’s main aim in creating the M1951 was for the Italian Army the army in fact chose not to adopt the new M1951 but they stayed with their trusty little M1934 pistols chambered for the 380ACP until they adopted the Beretta M92. The Italian Navy however did adopt it as did the Carabinieri and the Italian National Traffic Police. The only variant of the M1951 that did see adoption in limited numbers by Italian Special Forces was the M951R (the “R” standing for Raffico or “burst”). The M951R was capable of fully automatic fire but was not a success. Its cyclic rate was 1000 rounds per minute but its extended magazine only held ten rounds. The end result is a very short burst of fire that empties the magazine almost instantly. The M951R features a forward hand grip to try to make the pistol controllable in full auto mode. 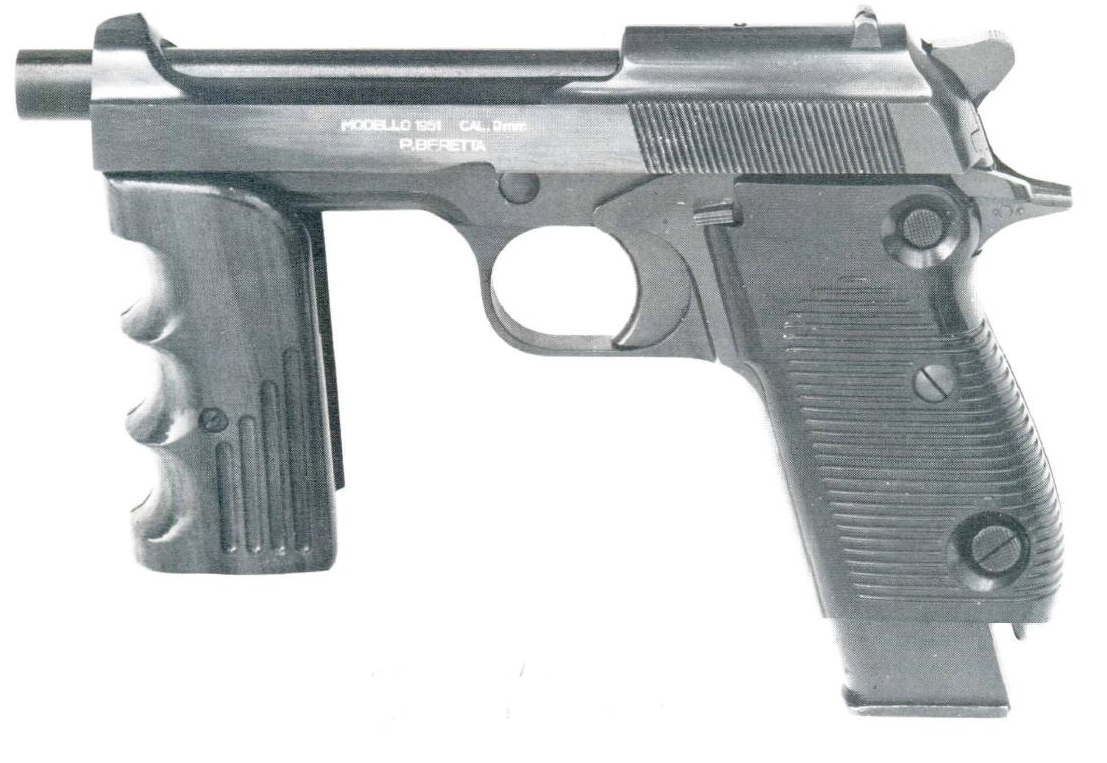 The Beretta M951R was capable of fully automatic fire but was completely impracticable. (Picture courtesy exordinanza.net).

The Beretta M1951 was the company’s first locked breech pistol and it also served as the development prototype that gave us the excellent Beretta M92 that is in service with the armed forces of the United States and in various other nations around the world. These are full size Military and Police pistols and as such are much bigger and heavier than the sensibly sized Beretta M1934 that preceded them. In proper working order these are excellent and very reliable pistols but many of the M1951 pistols in private hands now will be showing their age and be in need of some maintenance depending on their level of use.

Mike Beliveau has a short video in which he shoots and field strips an M1951 Beretta and in which he experiences the failure to extract problem that is commonly caused by a worn extractor.

The two main criticisms of the design of the Beretta M1951 are of the crossbolt safety catch and of the push button magazine release at the lower left side of the pistol grip. Although these design features may not fit with normal American practice when viewed from the perspective of Israeli training they both make sense. Israeli training requires a condition three carry normally with the pistol tucked into the belt at one’s four o’clock position. So the action has to be cycled in the typical “Israeli Draw” as the pistol is aimed for a one handed shot. Israeli training also teaches the shooter not to trust that the magazine will drop out when the magazine release is depressed but instead teaches the shooter to manually pull out the magazine to ensure it comes out reliably. So the design of the Beretta M1951 fits perfectly with Israeli military and police training and this is quite likely also true of Middle Eastern States such as Egypt and Iraq for example.

The Beretta M1951 was and is an excellent design and although nowadays these pistols are old and likely not something you’d choose as a carry pistol they are nonetheless very enjoyable to use and collect.

Berettaweb.com has instructions for the use of the Beretta M1951 and we’ve included these below. 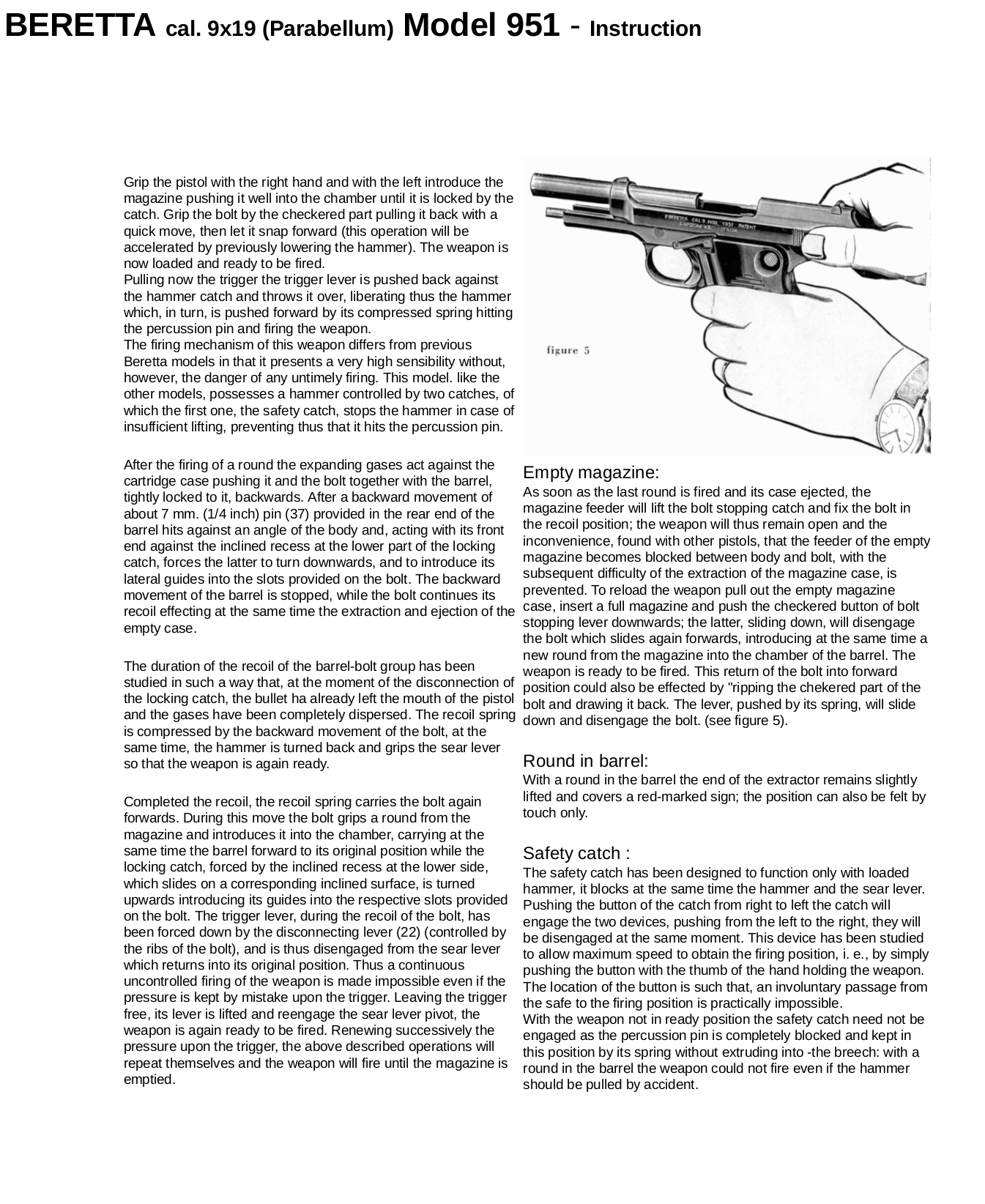 (Feature image at the head of this post courtesy Reddit Guns. Pistols from left to right are Beretta M1934, M1951 and M92).