The Beretta M1934 and it’s offspring the M1935 and the 948 have long been among my favourite pistols, along with the Colt 1911. This immediately tells you that I must be “an old fashioned guy with an old fashioned mind” and you would be entirely correct in that assumption.

The Beretta M1934 was the standard issue side arm for the Italian Army during World War II, an army whose standard rifle was the “Mannlicher Carcano”, which I have seen described as “the worst service rifle in the world”, a description I think to be a little unfair. I think the “worst service rifle” award should go to the Canadian Ross rifle which was initially adopted by the Canadian army for use in World War I and quickly replaced by the Lee Enfield because, amongst it’s many faults, it had the unforgivable fault of being able to be fired when the action was not locked shut, the end result of that being serious injury to the unfortunate soldier who pressed the trigger. I have had the opportunity to do some shooting with a Carcano rifle, but I think I would be unwilling to fire a Ross, I’m ugly enough as it is. So, why then is the little Beretta pistol so good when the same military chose an inferior rifle?

The Beretta Arms Company developed the M1934 because the Italian Army was considering adopting the German Walther PP. The M1934 was designed to be ruggedly simple and easy to field strip. Beretta kept to a single action design even though the Walther PP was double action, but chambered their pistol for the more powerful 9mm Corto (i.e. 9mm Court or 380ACP). The end result was a small, slim, rugged and curiously pretty little pistol, a pistol with a distinctly Italian character not at all like it’s German competitor. To compare the two is rather like comparing a Ferrari with a Porsche, one has romance and that unique Italian flair, the other is teutonic, functional and efficient. Which you will choose depends on what you are looking for. I would choose the Ferrari, or an Alfa Romeo, preferably an old one with some character, and that’s why I like the Beretta M1934.

Many thousands of M1934’s were souvenired by American servicemen during World War II so there exists a large inventory of them in homes and gun shops all over the USA. They certainly have collector value but they are sufficiently plentiful and reasonable priced that it is OK to consider the purchase of one either for fun shooting or for the more serious requirements of concealed carry if you have a professional or personal need for that. An M1934, checked and serviced by a competent pistol smith, could be a good choice in a pocket holster carried in Condition 3. So used it would offer the high level of safety inherent in Condition 3 carry, in a compact, slender pistol small enough for comfortable use even in the hands of a petite woman, yet big enough for a larger hand. The 380ACP ammunition is commonly available and the little Beretta has a reputation for digesting various bullet types including hollow points reliably.

The M1934’s offspring are the M1935, which was created for the Italian Navy and chambered for the 7.65 Browning (32ACP), which is the same calibre as used in the Walther PP and PPK, and the Beretta 948, which was chambered for .22lr. These pistols tend to be less common but still appear in on-line auctions. If you purchase one you are getting something that is a little more than just a gun; you are getting a piece of history. A war souvenir gun has been brought back by a soldier from a campaign that changed the course of human history. I think that is a large part of their fascination for the collector. These things are not just an object, they are a link to our historical heritage and the men and women who formed it. 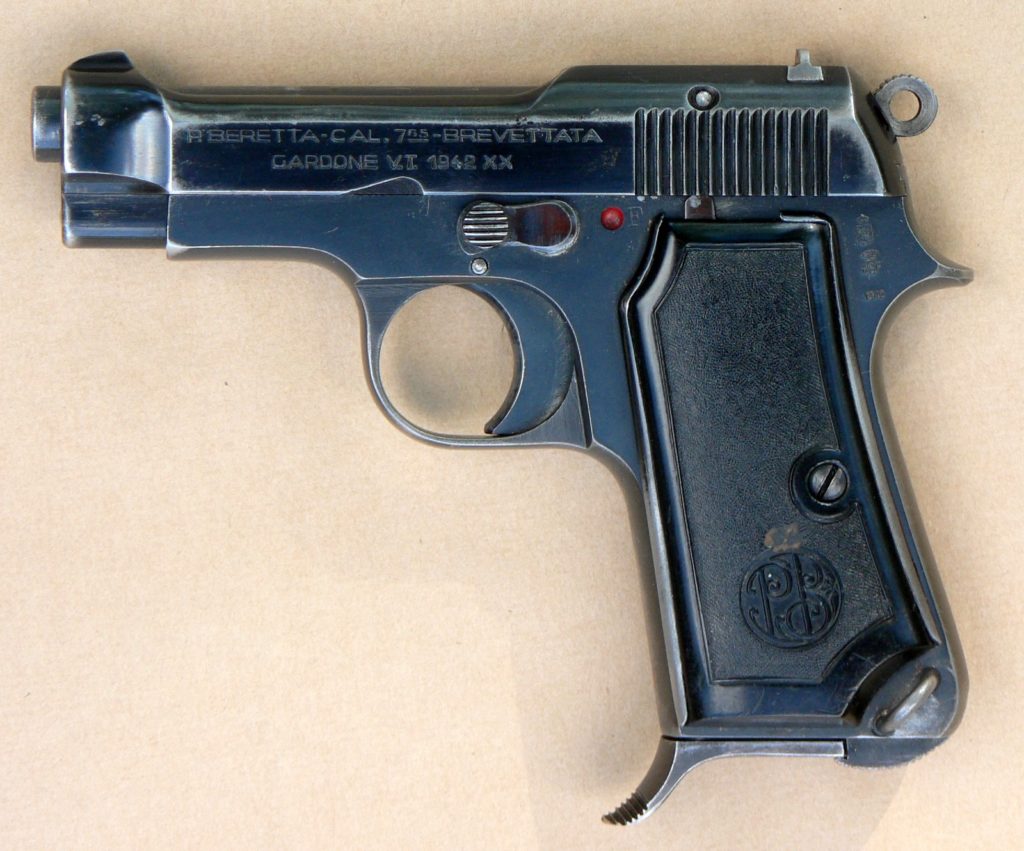