At the time of its introduction back in 1963 the .300 Winchester Magnum was a controversial cartridge. The fifties and sixties were the heydays of the cartridge “wildcatters” and there was no shortage of experimental cartridges being created by dedicated experimenters to achieve all sorts of performance improvements. Perhaps the most extreme of these was the .22 Eargesplitten Loundenboomer created by respected wildcatter P.O. Ackley. The .22 Eargesplitten Loudenboomer was the .378 Weatherby cartridge case necked down to accept .224″ diameter bullets. The aim was to achieve 5000fps muzzle velocity but it only proved possible to get 4600 fps with a 50 grain bullet and 105 grains of H570 powder. The cartridge demonstrates that the law of diminishing returns applies to rifle cartridges and that we get to a point where accelerating the mass of the powder gas produced consumes more energy than can be used to accelerate the bullet. 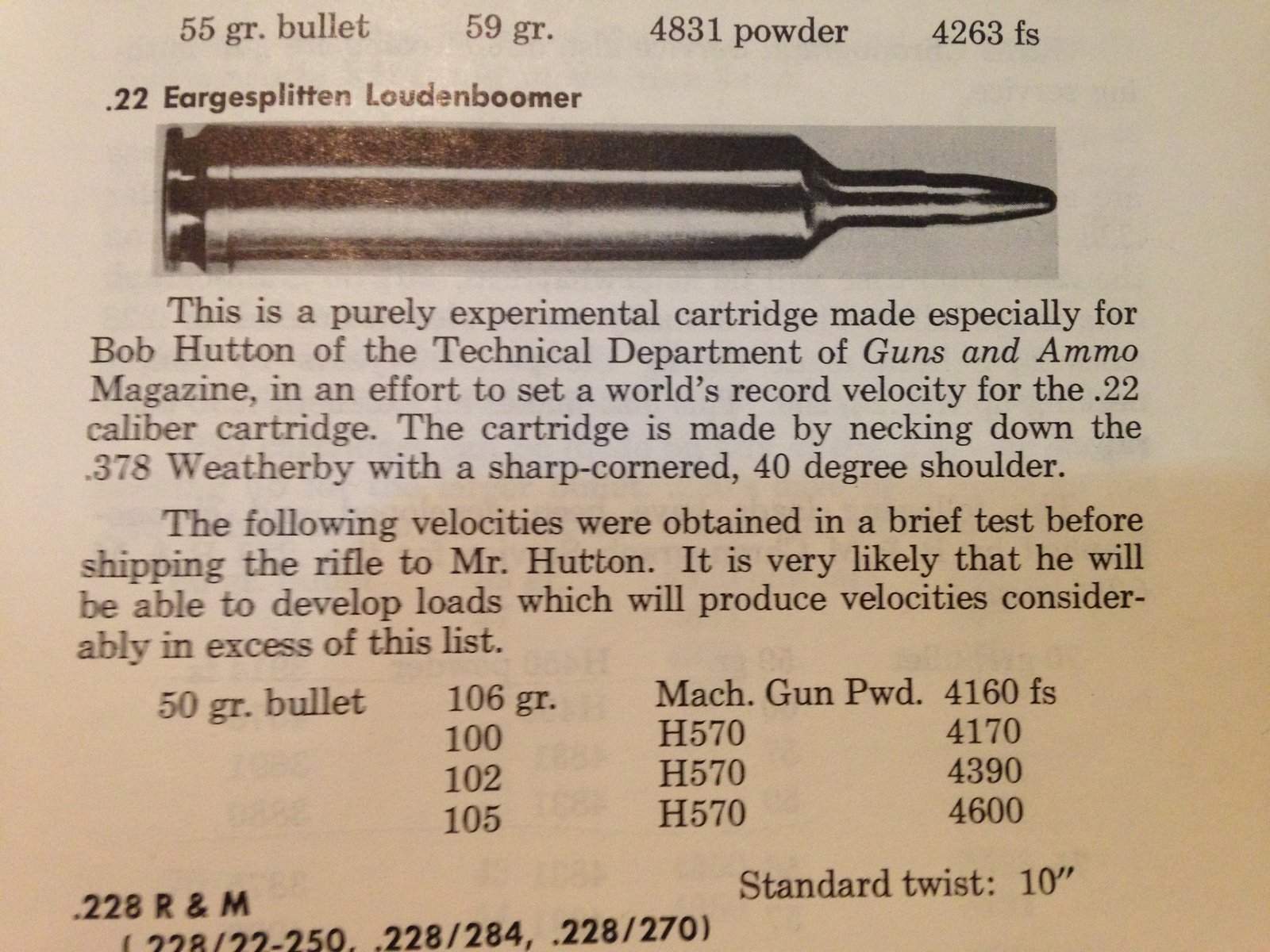 Information about the .22 Eargesplitten Loudenboomer from P.O. Ackley’s “Handbook for Shooters and Reloaders”.

There were all sorts of wildcat cartridges created back in that time and for those interested P.O. Ackley’s two volume set “Handbook for Shooters and Reloaders” is recommended reading. You can find it on Amazon if you click here; and you can also find collector copies of Volume I and Volume II.

Out of all this experimentation appeared a lot of .30 caliber wildcats based on the .300 H&H Magnum and its parent the .375 H&H Magnum to create a high velocity cartridge that would match the ballistics of the popular and excellent .300 H&H Magnum but that would fit the magazine of a standard length action. The fact that the .300 H&H Magnum is a belted case was a great advantage to the wildcatters because it greatly simplified case forming and fire forming. Although there are many who claim that a belt is not “necessary” on a bottlenecked rifle cartridge the belt can be greatly helpful simply because it provides positive headspacing regardless of whether the shoulder is in the desired place or not. Those who created the various .300 Magnum wildcats based on the .300 H&H took advantage of this. 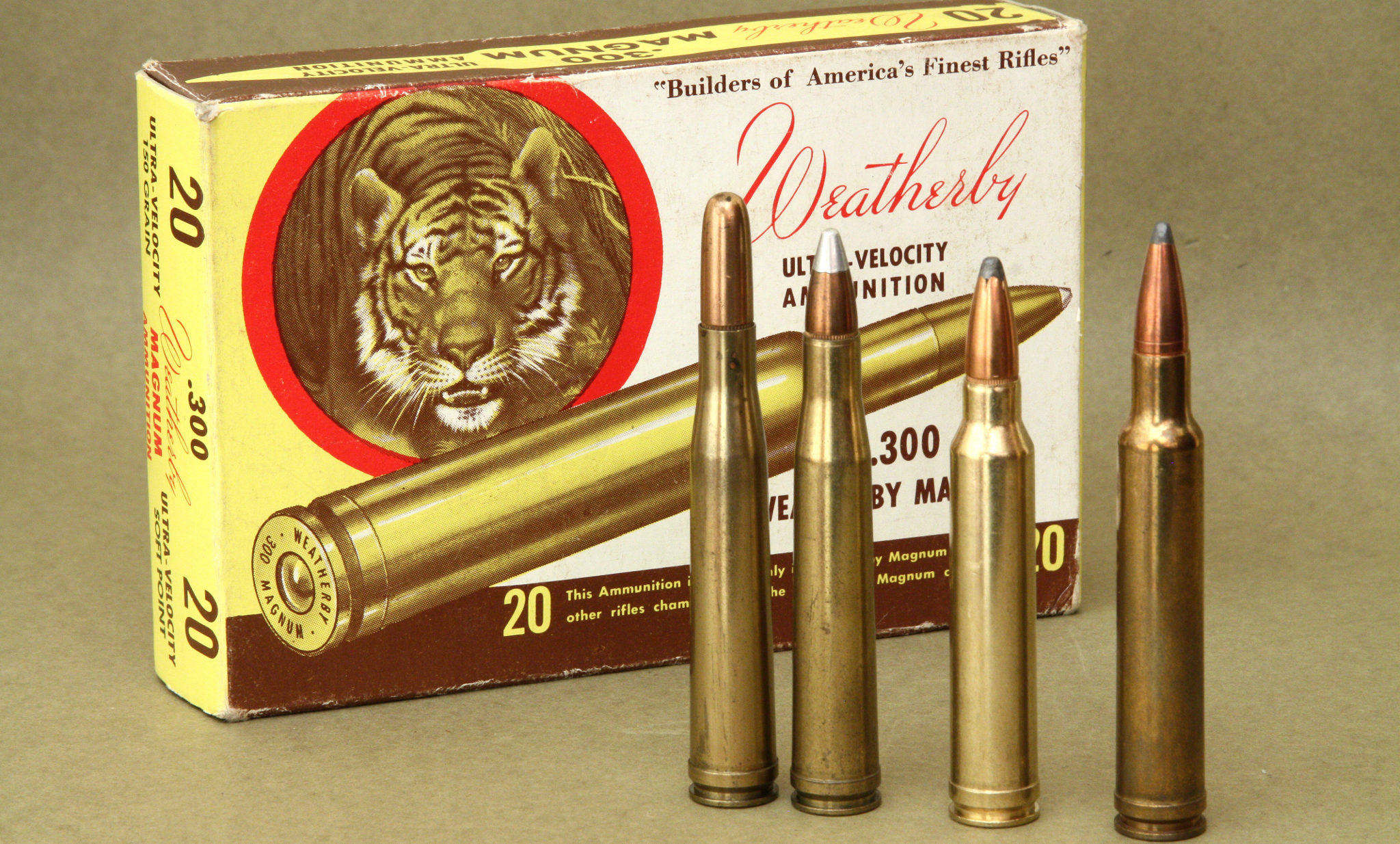 The reason for the creation of the .300 Winchester Magnum is apparent in this picture. The two cartridges on the left are .300 H&H Magnums. This caliber is too long for a standard length Mauser 98 or Winchester M70 action. To the right is Roy Weatherby’s .300 Magnum which simply “improves” the .300 H&H by moving the shoulder forward and reducing the case taper. Third from the left is the .300 Winchester Magnum which moves the shoulder forward as far as possible whilst still enabling the cartridge to fit in a standard length action. (Picture courtesy trofeocaza.com). 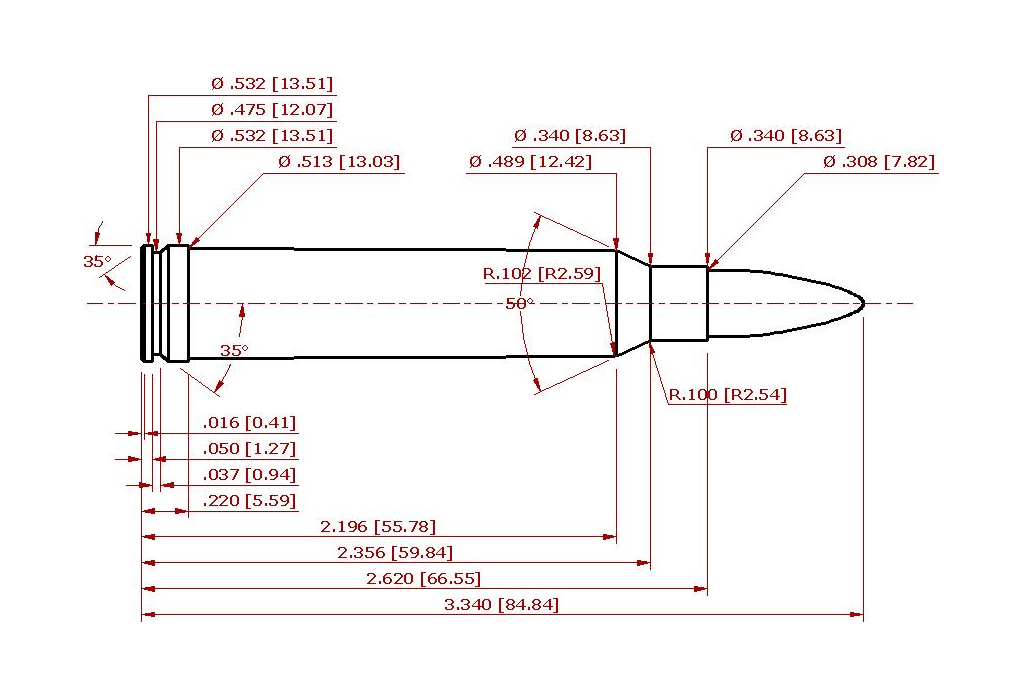 The thing that puzzled people about the .300 Winchester Magnum was how it managed to be so inherently accurate despite having a shorter than caliber length neck. (Picture courtesy Wikipedia).

The .300 Winchester Magnum defied the expectations of the experts and continues to do so. In order to maximize powder space but keep the overall cartridge length down to 3.34″ (84.84mm) Winchester’s designers gave the cartridge a shorter than caliber length neck. In theory this should have adversely affected the cartridge’s accuracy. But when tested the cartridge turned out to have inherent accuracy not only better than the .300 H&H Magnum but as good or better than its more modern competitors. There has been much debate and conjecture on this but I tend to think that two factors contribute to the cartridge’s accuracy; one is the 50° case shoulder and its contribution to centering the cartridge in the chamber, and the other is the belt and its contribution to help center the cartridge in the chamber also. My guess is that these two things work together to help the cartridge chamber consistently. The short neck simply needs to provide enough support for the bullet to ensure its concentricity, and it seems to do that nicely. So although a belt may not be “necessary” on a bottlenecked cartridge I suspect that a belt can be helpful. 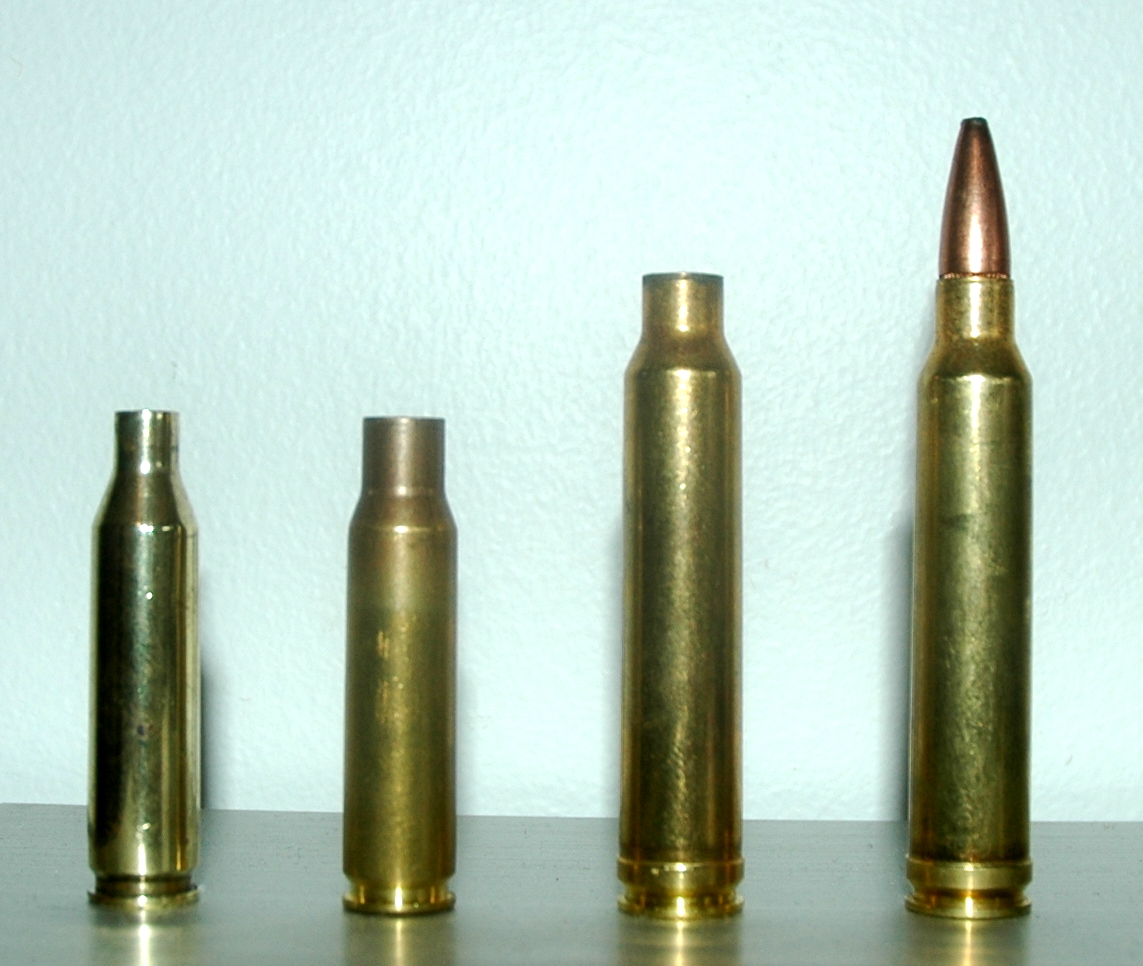 Nowadays the .300 Winchester Magnum is one of the best possible choices of caliber especially for the “One rifle world wide hunter” as long as Africa’s “Big Five” are not to be tackled. The .300 Winchester Magnum offers the ability to efficiently use 180gn to 200gn bullets for longer range shooting to take any deer, sheep or antelope species at ranges beyond 300yards as long as the hunter is capable of reliably and humanely achieving that. A properly set up .300 Winchester Magnum rifle can be completely at home in the woods stalking deer of any size and is equally at home on the plains or in the mountains where not only its flat trajectory is helpful but, more importantly, its resistance to wind deflection with the right bullets that can make the difference to whether a humane shot can be taken or not as the range extends and the winds are challenging to predict. Add to that the cartridge is popular world wide and made by so many manufacturers in so many variations that there’s no way one could try them all before wearing out your rifle’s barrel. 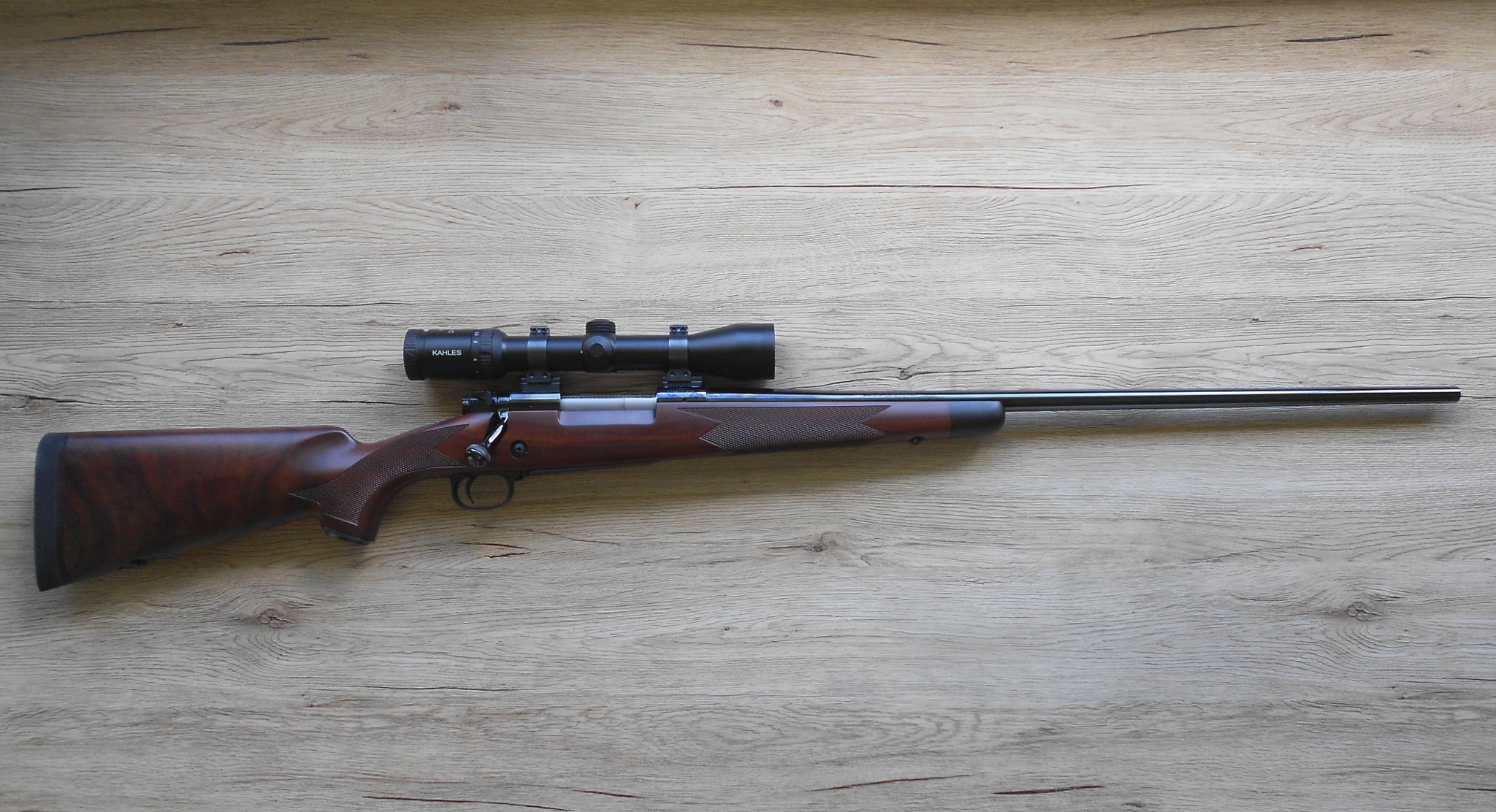 Is a .300 Winchester Magnum the right rifle for you? First and foremost there are a couple of factors to consider. First, do you really need the power and the range? Secondly do you want to carry a heavier rifle with a long 26″ barrel? If you are wanting a light and handy deer rifle then a .300 Winchester Magnum is not really your best choice. One of your best choices would be something like the current model Winchester Model 70 Super Grade in .308 Winchester which has a nice and handy 22″ barrel. Recoil and muzzle blast of the .308 Winchester are much lower than the .300 Magnum making it easier to carry, easier to shoot, and cheaper to buy ammunition for so you can do lots of enjoyable shooting practice with it. If however you are an experienced shooter and are going after larger species of deer, or likely to be in situations where you may be forced to take a shot out at 350 or even 400 yards, then the .300 Winchester Magnum comes into a class of its own. A .300 Magnum with rifle scope is going to tip the scales somewhere around or over 9lb but that is the price you have to be willing to pay for the power and range advantages you will get. 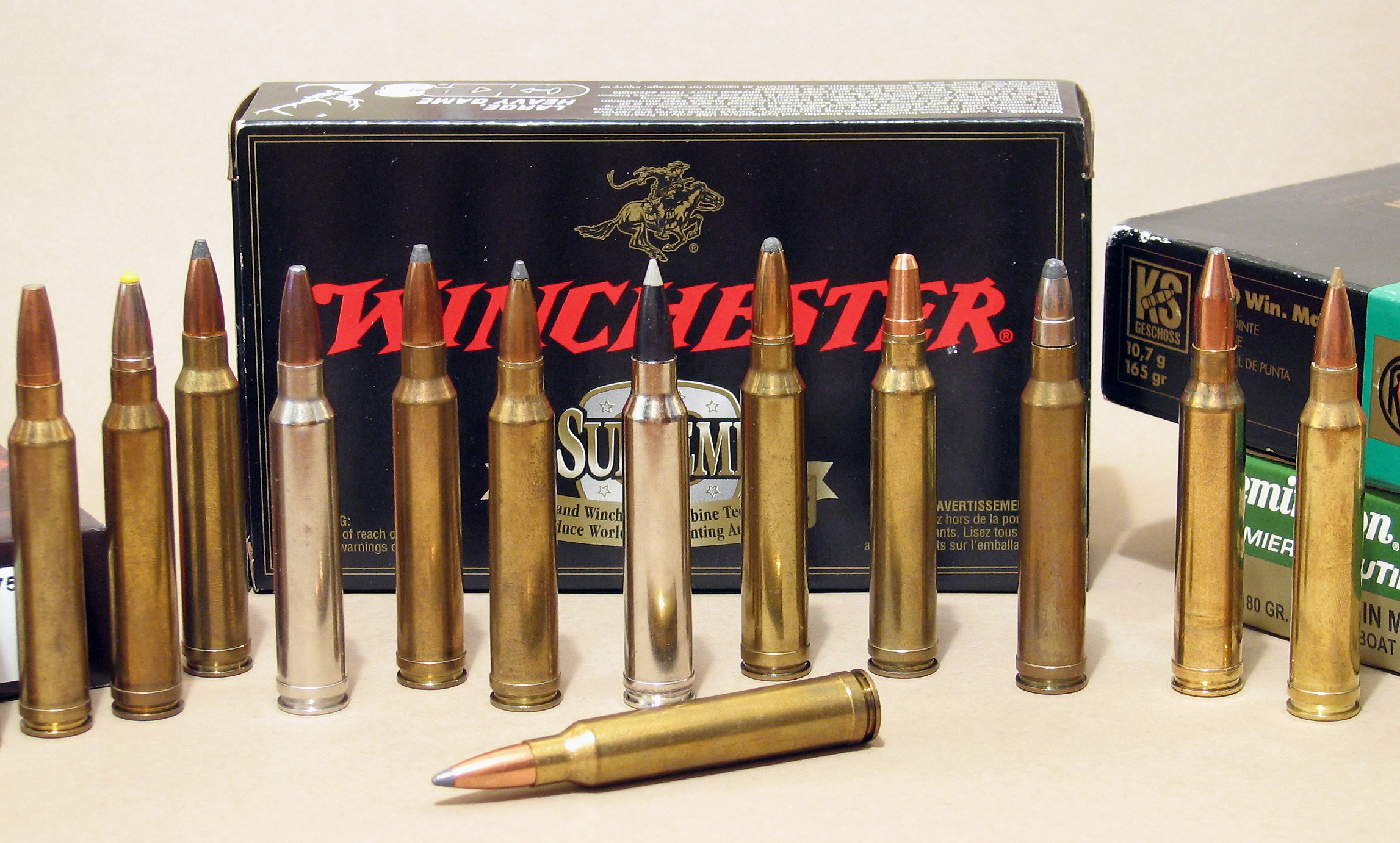 There are a lot of loadings available for the .300 Winchester Magnum with many manufacturers loading the cartridge. This is a mix of American and European ammunition. The cartridge second from the right is the excellent German RWS Kegelspitzer whilst the third from the right is an RWS UNI Classic. (Picture courtesy trofeocaza.com).

Ammunition for the .300 Winchester Magnum is plentiful and you can choose less expensive or premium ammunition. I’m currently using Remington 180 grain CoreLokt which has proven to be excellent and am planning to try the new Hornady Precision Hunter with the 200grain ELD-X bullet to compare just how much better it bucks the wind, and how it performs on game. For those who are interested in premium and exotic ammunition offerings the German RWS ammunition is hard to beat. The RWS Kegelspitzer bullets are one of the most impressive performers. The Kegelspitzer is designed so that the front section of the bullet fragments on entry literally sending fragments throughout the heart/lung cavity causing damage that will bring the quarry’s blood pressure down to nothing in short order. I’ve used them in 6.5mm caliber and a friend has used them in his .375 H&H Magnum with equally impressive results. RWS make ammunition loaded with eight of their premium bullet styles and you will find them on the RWS website if you click here.

For a full range of .300 Winchester Magnum ammunition available in the US at Brownells click here.

The .300 Winchester Magnum has picked up where its predecessor left off. Before the .300 Winchester Magnum made its debut the .300 Holland and Holland Magnum was a caliber of choice for hunters world wide including the late Jack O’Connor and Prince Abdorezza of Iran. Nowadays the .300 Winchester Magnum has become one of the most popular calibers on earth not only because it delivers the same ballistics as the .300 H&H Magnum, but also because it does it with better accuracy. The cartridge has not only made a name for itself with hunters, but also in military and police applications, and in long range bench rest competition. In short, if you are in the market for a medium to heavy sporting rifle in a magnum caliber it is likely to be the best possible choice for you, just as it has proven to be for me. 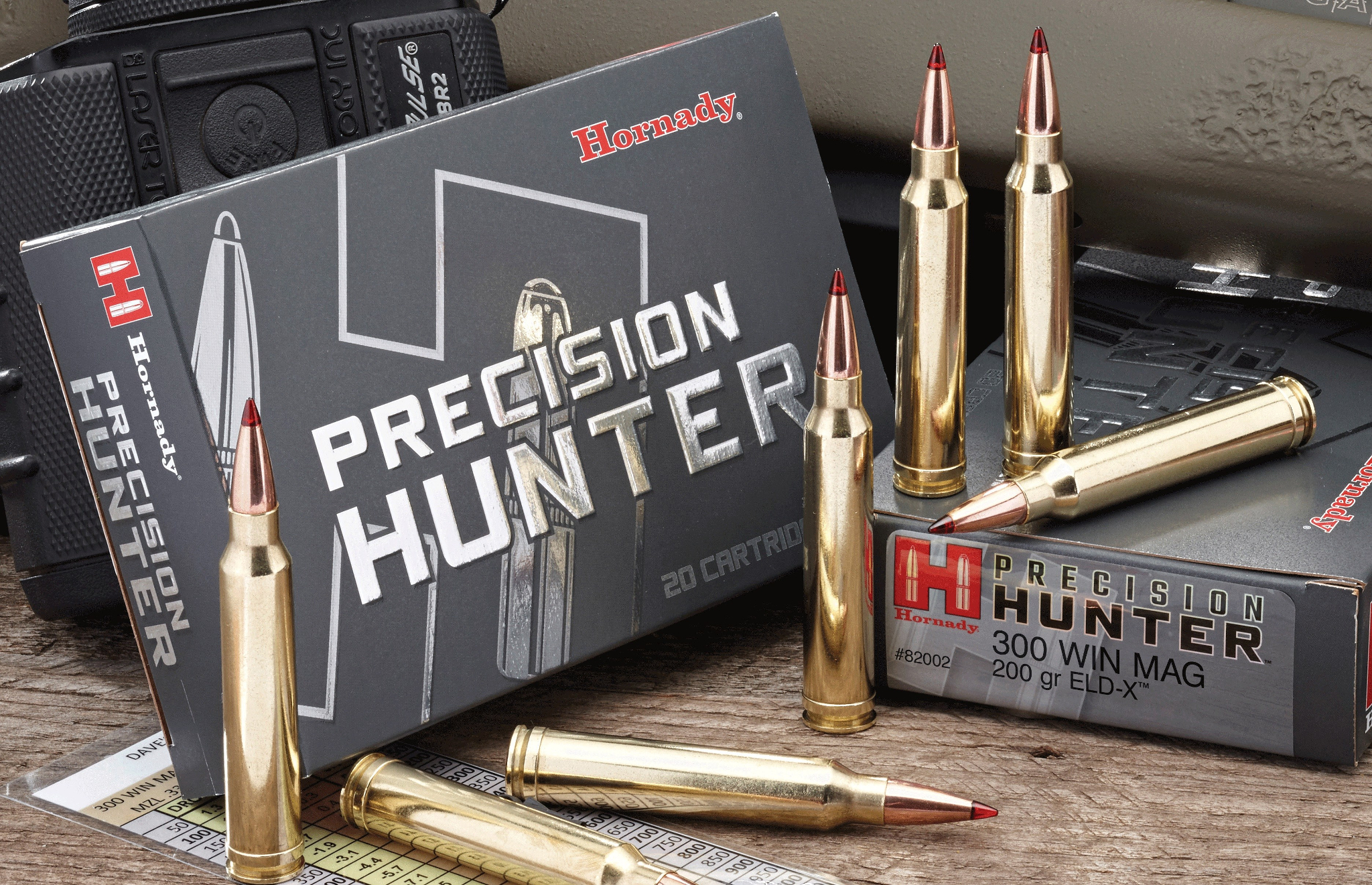 The new Hornady Precision Hunter ammunition loaded with the 200grain ELD-X bullet is one of the most promising loadings for the .300 Winchester Magnum. (PIcture courtesy Hornady).

(Feature image at the head of this post courtesy Wikipedia).