The Desert Eagle from Magnum Research is an interesting pistol. The only one I’ve had the opportunity to shoot was a .44 Remington Magnum on a Handgun Metallic Silhouette range and it was an enjoyable handgun to shoot out on an open range taking a bead on a distant ram. The gas operating system is reputed to absorb some of the recoil and no doubt it does, but the overall design of the gun and the grips are major contributors to making the Desert Eagle comfortable to shoot. That being said, any handgun in a calibre such as the .44 Remington Magnum on up is going to let you know in no uncertain terms when you press trigger on a full charge load. That being said I have not had the opportunity to try one in .50AE and I suspect that might turn out to be a more challenging experience.

You’ll find an informative review on a Desert Eagle in .50AE if you click here. 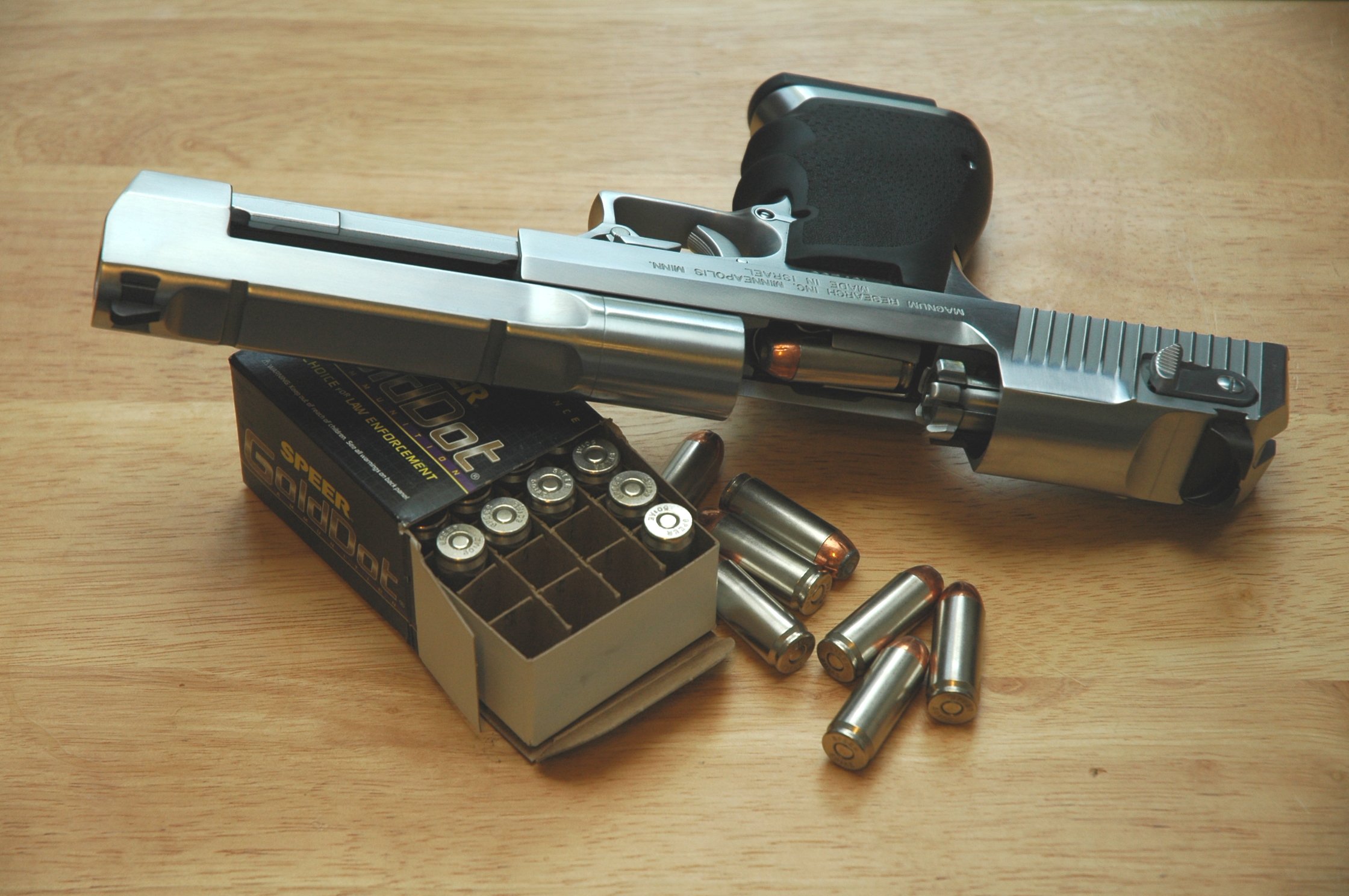 The Desert Eagle, like the Wildey, is not a carry pistol for self defense despite its having been the handgun of choice of Agent Smith in the movie “The Matrix”. The Matrix was a movie and as such was very into bending reality. Even finding a suitable holster for a Desert Eagle is not as simple a task as finding one for a Colt M1911 or a Glock. For those absolutely determined to try carrying a Desert Eagle as comfortably and as concealed as possible Masc Holsters make a good looking carry holster for the Desert Eagle complete with pouches for two magazines. 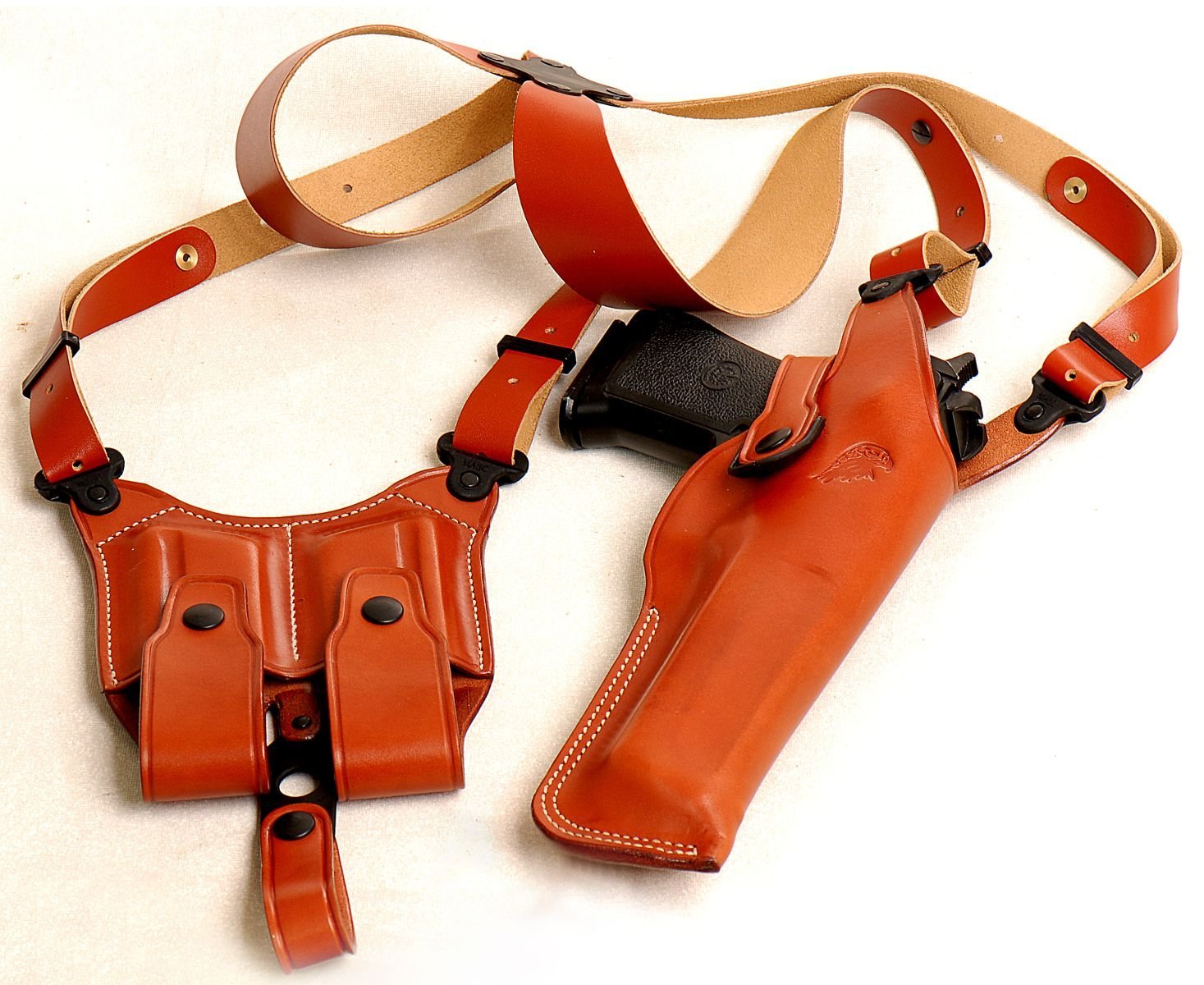 You will find the Masc Holsters rig for the Desert Eagle on Amazon.com if you click here.

You will find Masc Holsters web site if you click here.

Magnum Research make top quality holsters for their Desert Eagle. You will find them if you click here.

Another holster is available from Impact Guns which you will find if you click here.

The Desert Eagle should really be considered a hunting handgun. In .50AE it should provide a better measure of protection in close and unfriendly encounters of the bruin kind but given the relative slowness of an aimed follow-up shot that first shot would need to be on the money. In .44 Remington Magnum it is a nice handgun to shoot and quite controllable. That 72.4oz tames the .44 Magnum nicely.

72.4oz empty compared for example with 39.7oz empty for a Wilson Combat Hunter in .460 Rowland. With the .460 Rowland providing similar ballistics to the .44 Magnum in a rather more convenient to carry package with grips that don’t require one to possess prehensile fingers to wrap around it many ask why one would want a Desert Eagle? 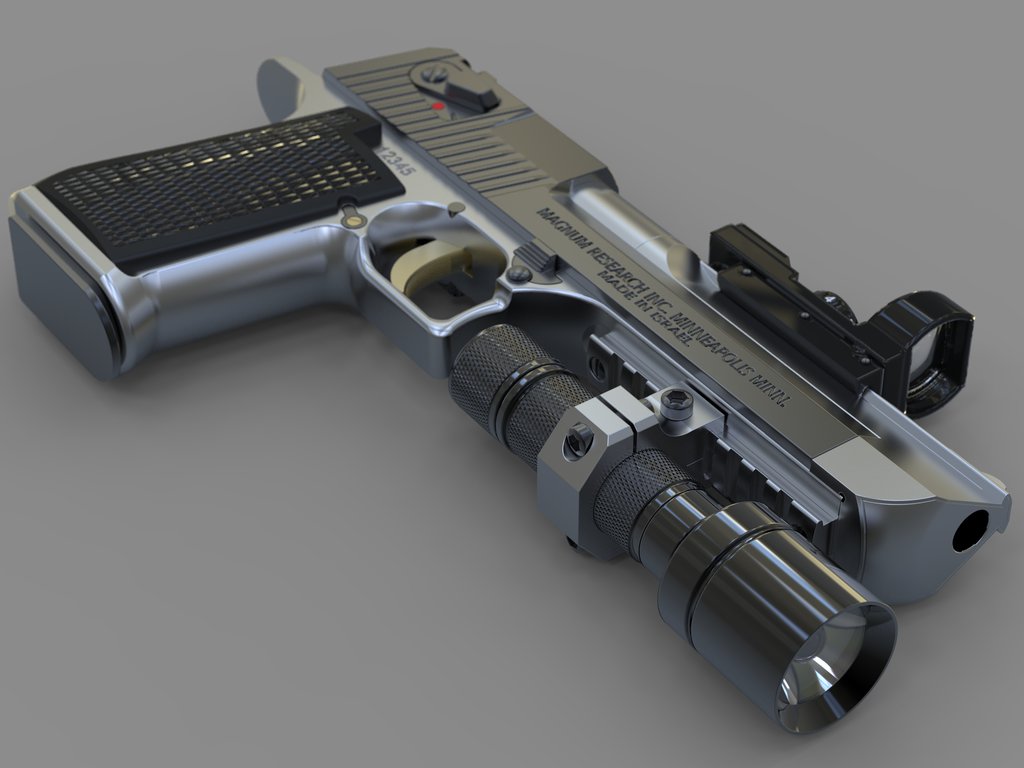 Adding a flashlight and optical sights makes your Desert Eagle more versatile, but heavier. If it is chambered for the .50AE this may be an advantage. (Picture courtesy hdwallpaperbackgrounds.net

The short answer is that the .460 Rowland in a light auto-loader such as a 1911 style pistol or a Glock is going to be a bit of a bruiser to shoot. Light, fast handling, but the recoil is going to be sharp. At double the weight the Desert Eagle has to be more controllable in a comparable calibre such as the .44 Magnum, but with the advantage of being able to conveniently move up to .50AE if you need protection in big bear country. As the rim size is the same moving to 50AE simply requires a barrel swap and magazines.

The Desert Eagle has been through a number of model variations and configurations. It has been available in .357 Magnum, .44 Remington Magnum and more recently in .50 AE (.50 Action Express).

This Desert Eagle rig that was up for sale on icollector.com gives an idea of the flexibility of the Desert Eagle. This kit includes .357 Magnum, .44 Remington Magnum and .50AE in various barrel lengths. (Picture courtesy icollector.com).

You will find the sale page on icollector.com for the Desert Eagle pictured above if you click here. That particular set has long since been sold but it gives an idea of what is possible with a Desert Eagle pistol.

In 2009 Magnum Research Industries began to manufacture the Desert Eagle themselves at their plant in Pilliger, Minnesota prior to being taken over by Kahr Arms the following year. So the Desert Eagle has had a varied manufacturing history. 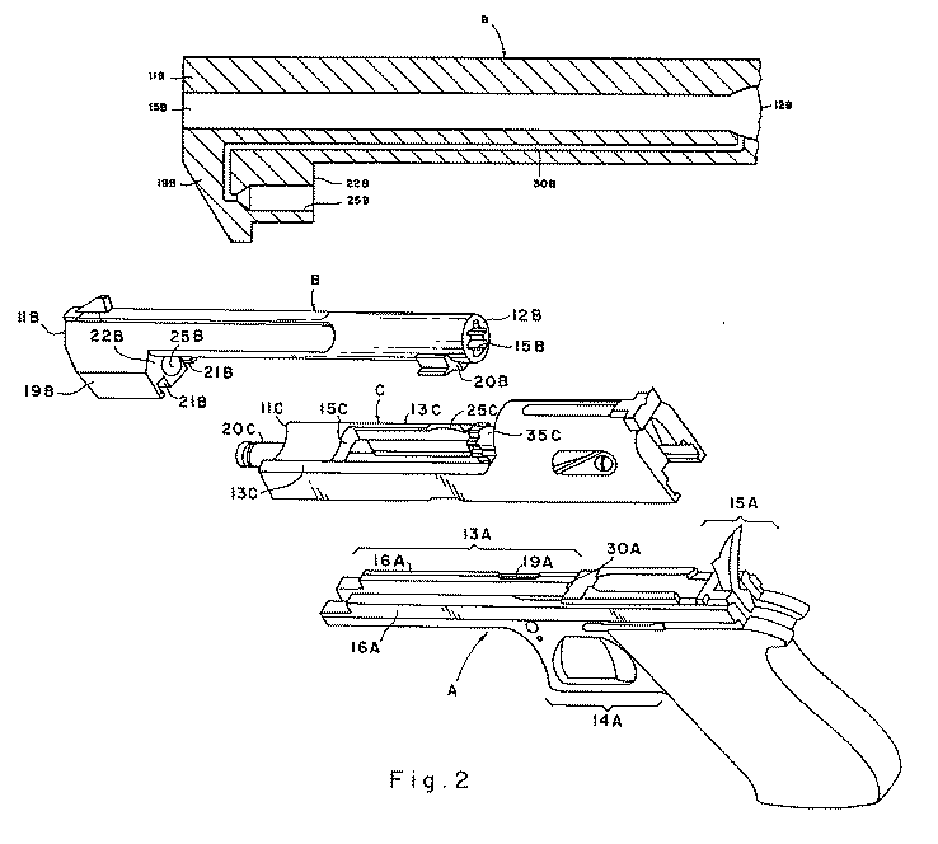 The pressures generated by calibres such as the .44 Remington Magnum and the .50 AE require a different mechanism than the common Browning delayed recoil system to operate. Arnolds Streinbergs and Bernard C. White opted for a gas operating system such as we find on many semi-automatic rifles including the Ruger Model 44 carbine in .44 Remington Magnum that was made from 1961-1985. As can be seen on the diagram above Arnolds Streinbergs and Bernard C. White decided to place the gas port near the chamber of the barrel. As with any gas operated firearm however maintenance is important and keeping that gas port clean is essential to keeping your Desert Eagle operating reliably.

There have been a number of models of the Desert Eagle over the couple of decades of production.

Mark I and Mark VII

The first model of the Desert Eagle was the Mark I. Although looking very similar to later Desert Eagles there were differences in the safety levers and side catch. The Mark I was made in .357 Magnum and .44 Remington Magnum. The Mark VII pistol came with an adjustable trigger and was available in .357 Magnum, .41 Magnum (with 6″ and 10″ barrels), .44 Remington Magnum and .50 Action Express. All calibres other than the .41 Magnum were available with 6″, 10″ and 14″ barrels.

The adjustable trigger of the Mark VII can be retro fitted to a Mark I pistol.

The current model of the Desert Eagle is the Model XIX. It is available in .357 Magnum, .44 Remington Magnum and .50 AE with 6″ and 10″ barrels. A short production run of five hundred was also made in .440 Cor-Bon.

There is a California model of the Desert Eagle Mark XIX which has a firing pin  block safety. This is only available in .44 Remington Magnum.

The Desert Eagle is a handgun for someone who has a real desire to own and use a heavy handgun. Tipping the scales at around double the weight of firearms that are chambered for cartridges in the .357 Magnum and .44 Remington Magnum (such as the .460 Rowland) they are stable and comfortable to shoot in the smaller calibre offerings and provide enough heft to be controllable in .50AE, especially if you have forearms like Popeye the Sailor Man and a vice like grip.

Magnum Research Industries now offer a muzzle brake for Desert Eagle pistols and I think I would opt for one of those were I purchasing one, especially on a .50AE.

If I were in the market for one I’d likely go for a .44 Remington Magnum in black made by Israel Weapon Industries. 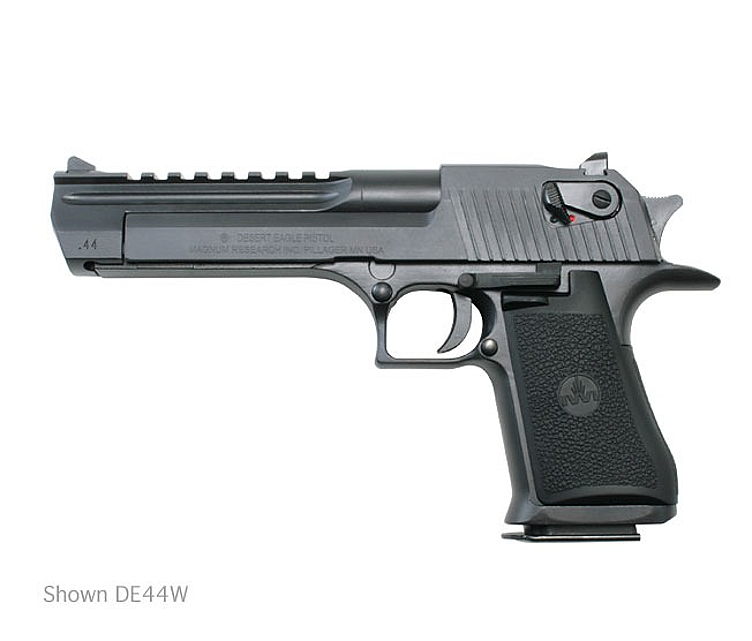 The multi-millionaires and oil sheiks out there may prefer the 24 caret gold plated one. 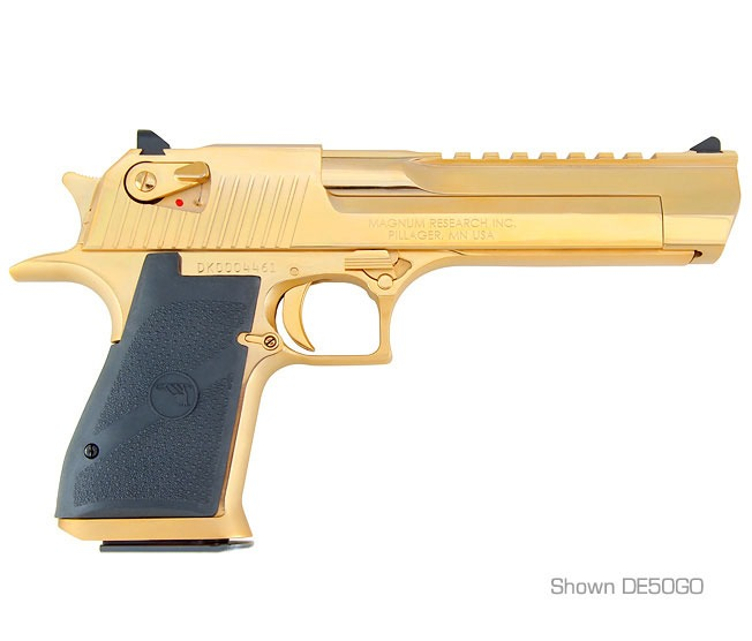 The not at all ostentatious 24 caret gold plated Desert Eagle. (Picture courtesy MRI).

The Desert Eagle can also be found on Cabela’s if you click here. 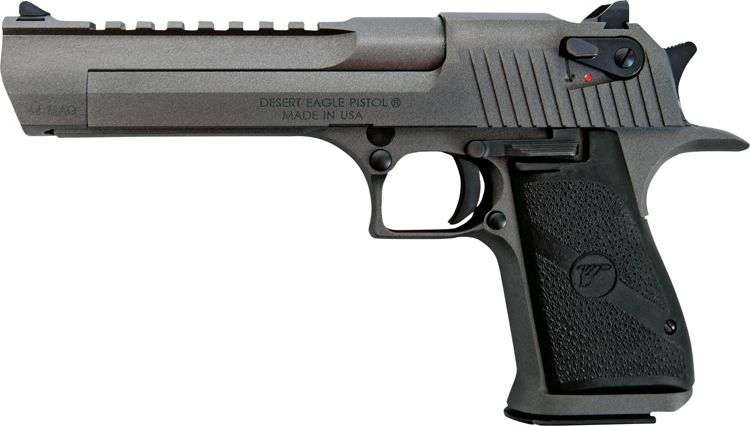 Buying a Desert Eagle, in my mind, makes about as much sense as buying a Ferrari. It isn’t a wholly logical thing to do. But who wants to live a life just doing logical things?