It’s a car that someone should make a movie so it can star in it, rather like the Aston Martin DB5 starred in the James Bond movie Goldfinger and the DeLorean starred in Back to the Future. It would need to be a movie that somehow combines the best of a Sherlock Holmes type of story with some James Bond Cold War intrigue laced with a bit of the grittiness of the British TV counter spy drama Callan; and with some carefully selected guns for the characters to add some interest; a Webley Fosbery, a Polish Radom Vis WZ 35 and a few more interesting guns of that sort. 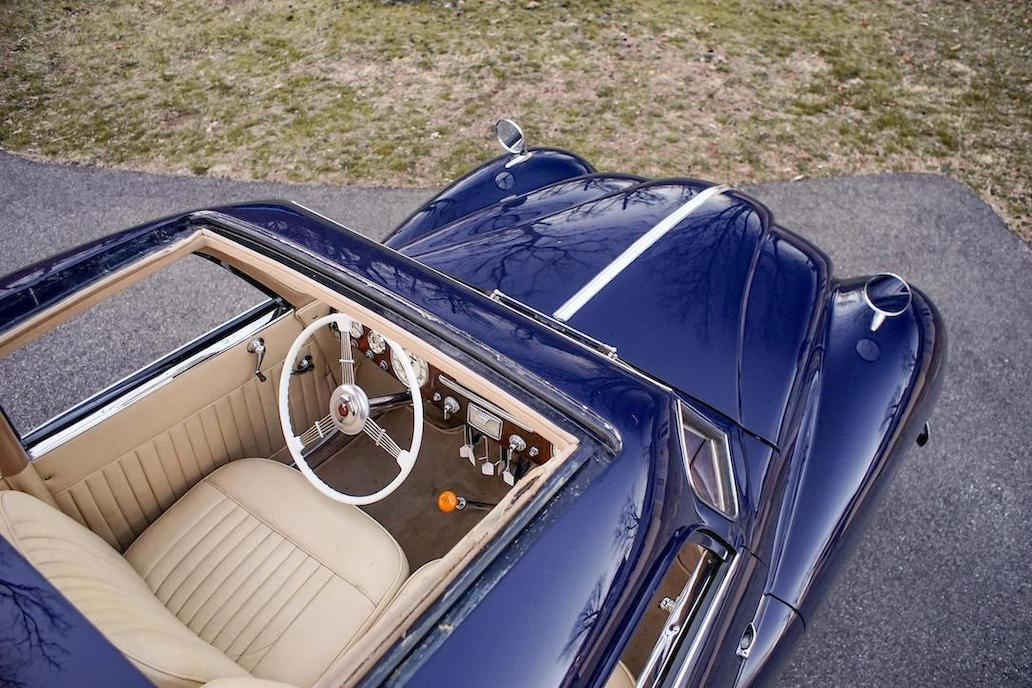 The Tatra T87 features a convenient sun roof; useful for staging gun battle car chase scenes through the streets of Prague or Berlin or through the Transylvanian countryside.

The creation of the Tatra rear engined V8’s is itself a story laced with pre-war intrigue. It is a story of a car designed by Austrian engineer Hans Ledwinka, an associate of Dr. Ferdinand Porsche, and it was a car jointly designed by Hans Ledwinka, Zepplin designer Paul Jaray and engineer Erich Übelacker. The big rear engined V8 Tatras were built as models T77 between 1934-1935, T77a between 1935-1938, and the Tatra T87 between 1936-1950, so our feature car was made during the final year of production. The successors to the T77 and T87 were the similar Tatra 600 Tatraplan and the Tatra 603. 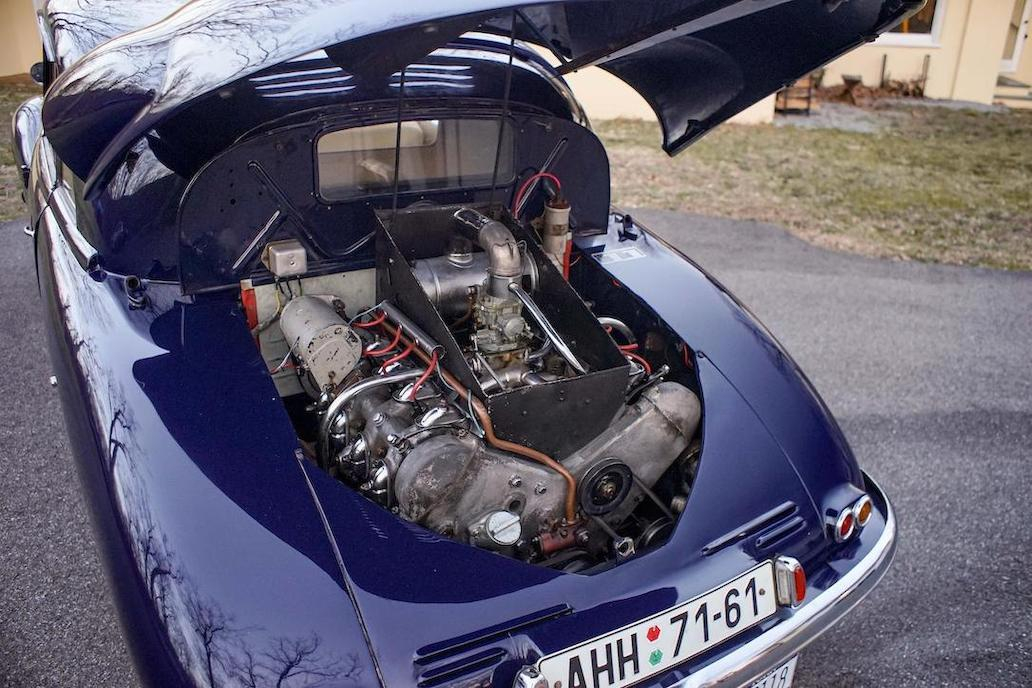 Like a Volkswagen gone mad or a Porsche on steroids the Tatra 87’s three liter magnesium alloy V8 hangs out behind the rear axle line delivering its power to the rear wheels through swing axles.

This was a car birthed in the era of the creation of the autobahn when designers were thinking of aerodynamic cars with straight line speed, like Zepplins of the road. The idea that these autobahn cruisers would need to go around corners was not as high on the agenda as it should have been. The big Tatras were and are impressive motorway cars, highly capable , quiet and comfortable. But hang even a magnesium alloy three liter V8 out behind the rear axle line and bolt it to a set of swing axles running on skinny wheels and cross-ply tires and be ready for some over-steer excitement. 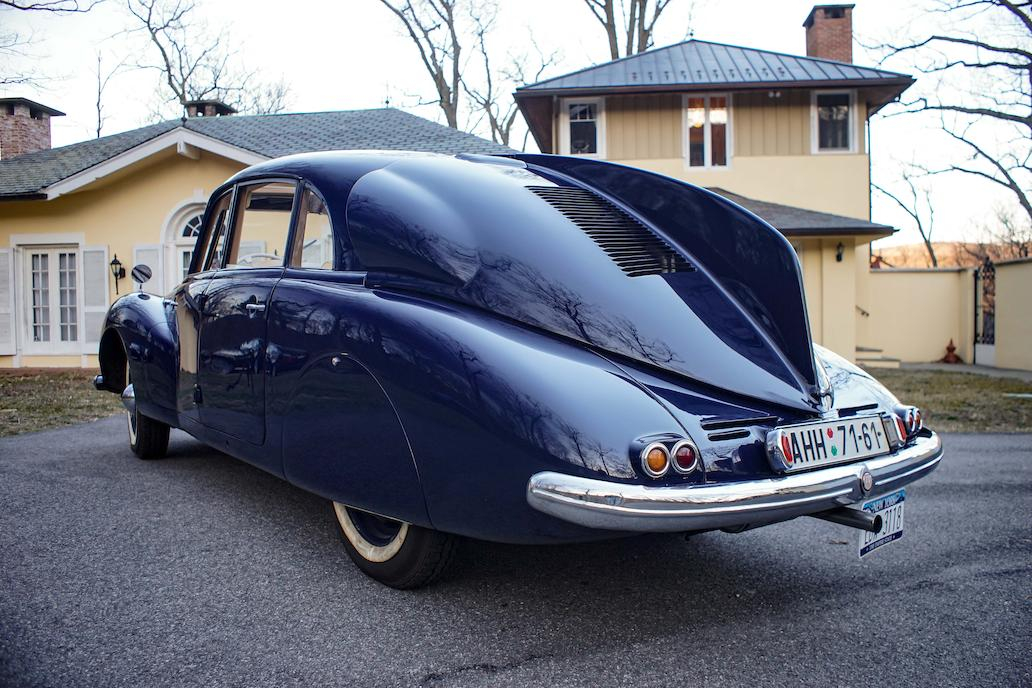 With their big V8 engine and futuristic aerodynamic shape the big Tatra became popular with Nazi German senior officers including Erwin Rommel of the Afrika Korps.

Appearing in the thirties the T77 and T77a became a popular choice amongst high ranking Nazi German military officers such as Erwin Rommel the famous general of the Afrika Korps. However the T77’s propensity for getting into an over-steer condition when driven hard on winding roads soon led it to be christened “The Czech secret weapon” as quite a number of those senior Nazi military officers finished up dead or badly injured when their big Tatra rolled over. Drivers of the thirties were not used to the handling characteristics of these rear engine cars and so the difference in the handling came as a sudden surprise often in the worst possible circumstances. Drivers of the Auto Union mid-engined Grand Prix cars of the thirties faced similar difficulties. In any event Hitler banned his senior officers from owning the big Tatras and made them go back to boringly predictable Mercedes instead. He also banned Tatra from making any more of these gorgeous but temperamental cars until the end of the war saw his influence brought to an end. 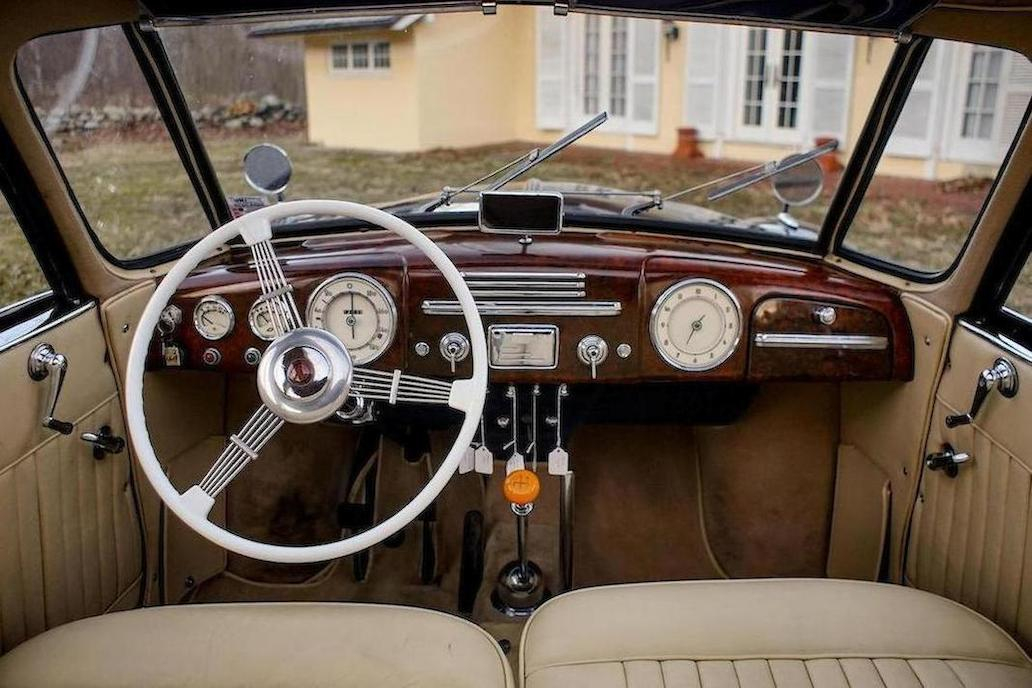 The interior of the Tatra T87 is well laid out and inspires the driver to enjoy the driving experience.

The Tatra T87’s 2,970cc Single Overhead Camshaft air-cooled magnesium alloy V8 engine breaths through a single downdraft carburetor and produces 75bhp at 3,500rpm. The engine drives the car through a four speed manual transmission located in the same configuration as the Volkswagen and rear engined Mercedes of the thirties. Rear suspension is swing axles and the front suspension independent. Brakes on all four wheels are hydraulically actuated drums. Driven by someone who knows how to get the best out of the car these are a wonderful driver’s car and the V8 in the rear adds that V8 music we all love. 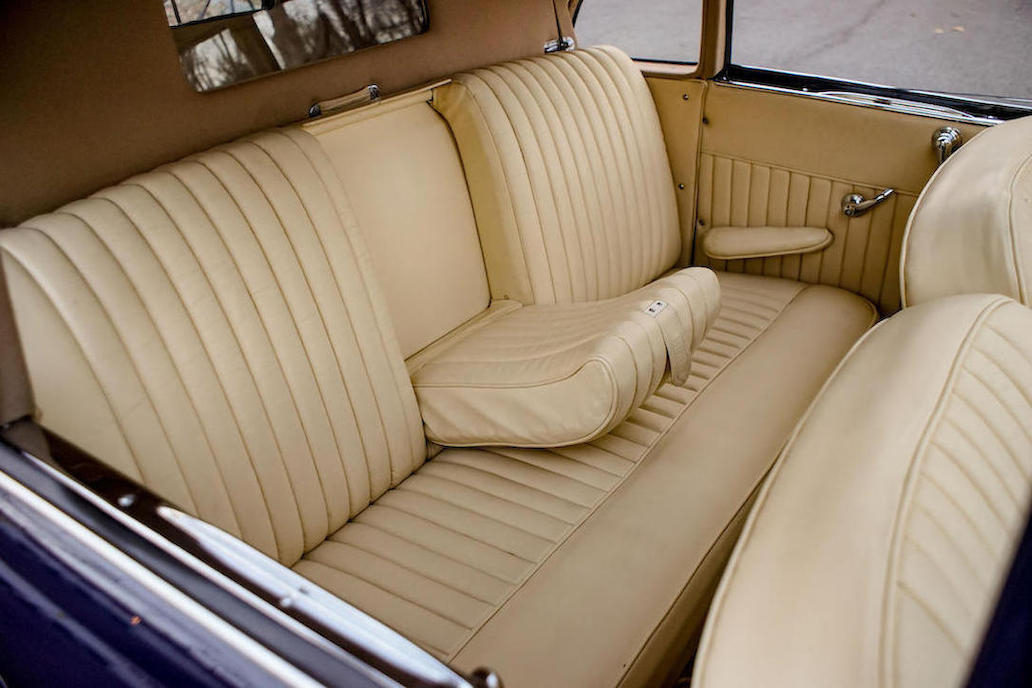 The Tatra T87 was an expensive car often driven by a chauffeur so the car’s owner would commonly experience it from the comfort of the rear seat.

The interior of the T87 is aimed at comfort and the whole car is quite “Art Deco” in its style. It was created as a new style of car for a new era. In Czechoslovakia’s case that new era involved being invaded by Nazi Germany, and then when the Nazis were defeated being made a satellite state of the USSR. So the Tatra 87 went from being a car of choice for Nazi military officers to being a car of choice of Communist Party officials, whilst the “proletariat” caught the bus – if there was one. 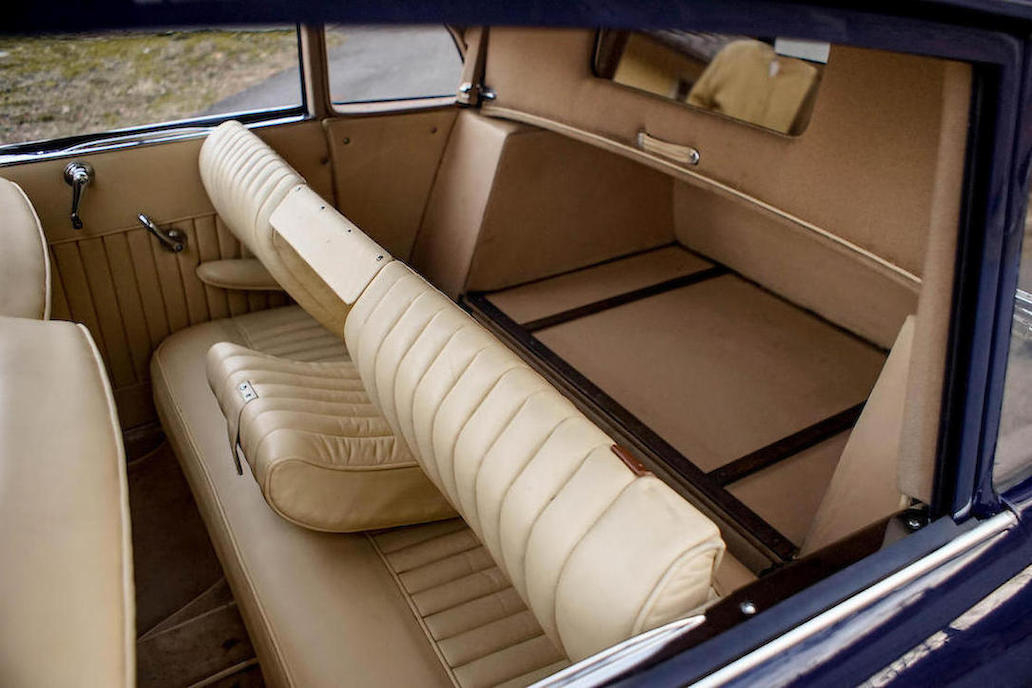 Behind the rear seat is a compartment that would be ideal for keeping a BREN or a take down sniper’s rifle and a stash of Bolo Mauser pistols. This is a perfect car for a movie filled with spies and Cold War intrigue drama.

Our feature Tatra 87 is coming up for sale by Bonhams at their Greenwich Concours d’Elegance Auction on 5th June 2016. 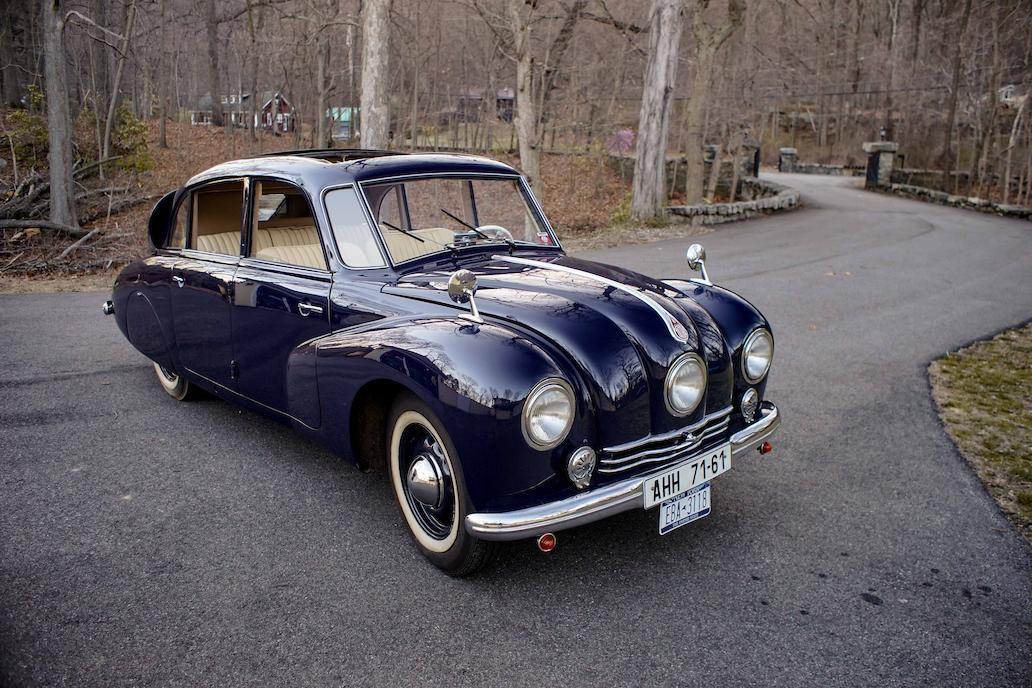 The Tatra T87 looks entirely appropriate for a rendezvous in an eastern european forest setting. The three piece windscreen gives the car a quirky character.

The sale car was purchased in the year 2000 and shipped to the United States where it joins an inventory of about ten such Tatra T87’s that call America home. One lives in Jay Leno’s garage, one other takes pride of place in the foyer of Peter Mullin’s museum. So this T87 represents a rare opportunity to acquire one of these cars in the United States. 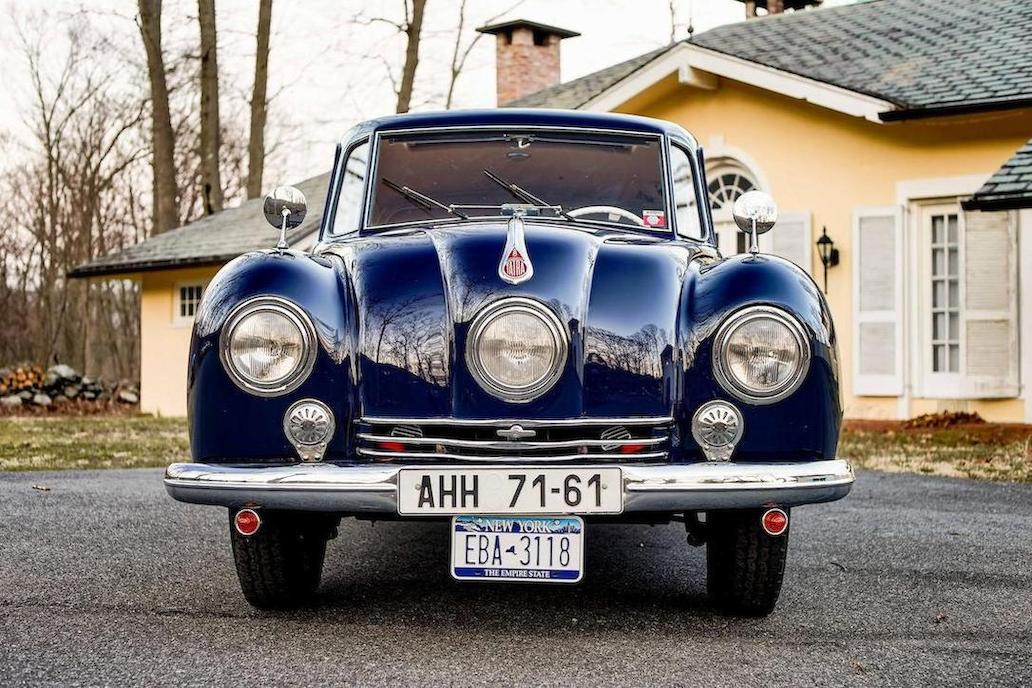 The Tatra’s three headlights are another quirky but practical feature.

The sale car has been restored in Czechoslovakia in the nineties and has recently been for pre-sale mechanical work with a Massachusetts-based T87 specialist which included refurbishment of the gas tank and gauge. So the car is in very nice condition and has seen little use in its decades of life this side of the Iron Curtain.

This is a car that appeals to people of imagination. It comes as no surprise that John Steinbeck owned a Tatra T87, they are a car that put together a quirky look with some quirky handling and yet make the whole into one of the most desirable motor cars of the thirties and forties, arguably one of the most interesting motor cars ever made. If you have the desire to own a rolling piece of Art Deco automotive art this is almost certainly the car for you.