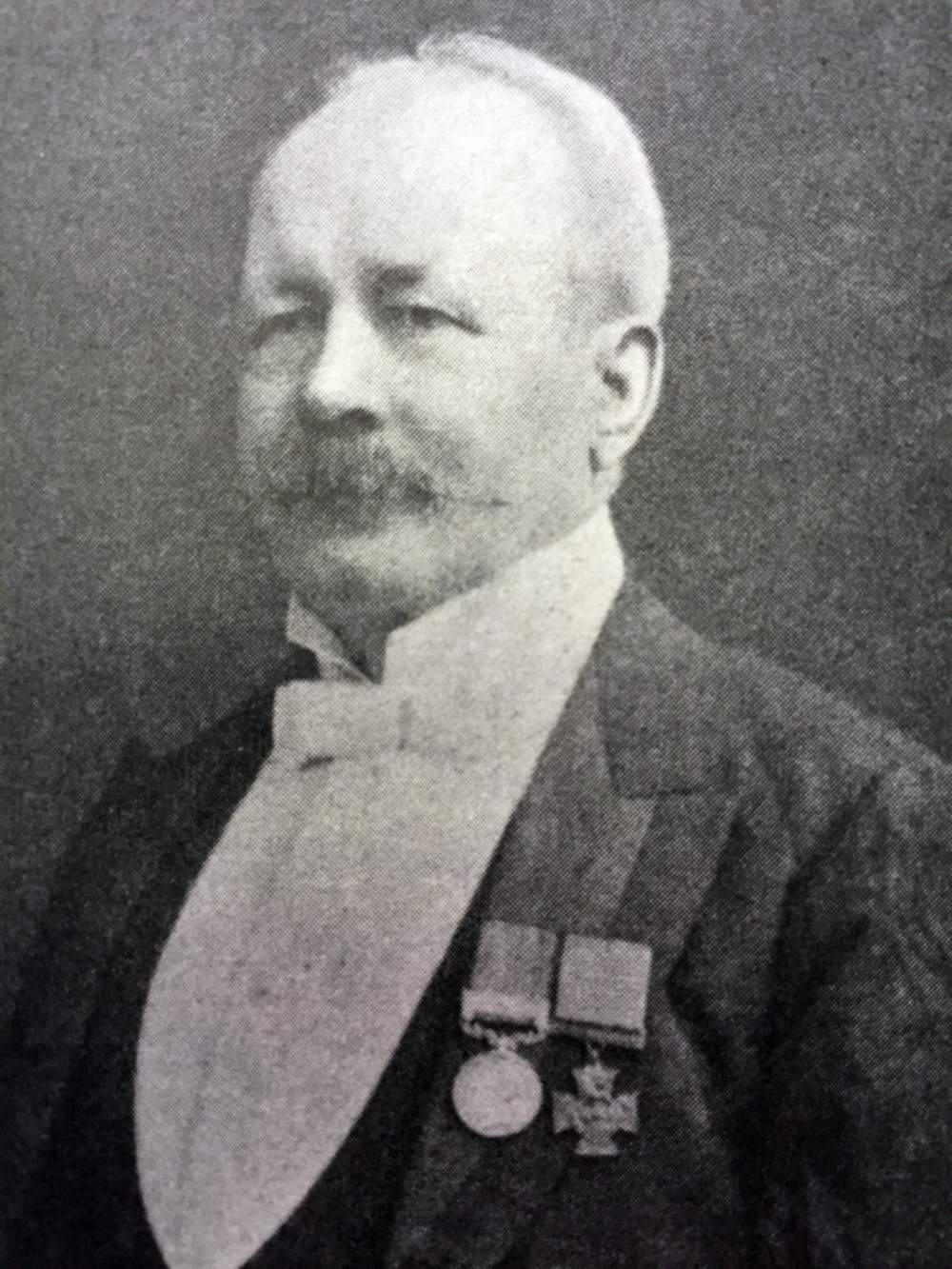 As a military man George Vincent Fosbery understood the practical needs of a military officer and what would prove to be ideal in a pistol. Added to that was the use of handguns on shooting ranges such as Bisley and what would work better in that environment also. So during the late 1890’s he began working on a design for a revolver that would eliminate the need for a double action trigger pull and that would instead provide a crisp single action trigger yet still automatically rotate the cylinder and cock the hammer. He reasoned that an automatic revolver would combine the best attributes of the revolver and the automatic pistol in one handgun.

The video segment below will give you and idea of how this looks in actual operation.


As you have seen the Webley made Fosbery automatic revolver indeed permitted a rapidity of aimed fire that requires a Jerry Miculek to duplicate with a conventional double action revolver. In fact it would be interesting to see what Jerry Miculek could do with a Webley Fosbery and some Prideaux speed-loaders. In the video the presenter mentions that this revolver was quite popular with World War I pilots, especially in the early stages of the war before machine guns were being mounted on the aircraft. The revolver or automatic pistol were used by pilots of both sides to shoot at each other, British and Commonwealth pilots (such as from Australia) would use either the Webley automatic pistol, the Colt 1911 (chambered for the British .455 Automatic cartridge as used in the Webley automatic pistol) or the Webley Fosberry, or of course the standard Webley revolver. In its role as used by pilots the Webley Fosberry was a highly successful arm. It was only in the mud and crud of the trenches that the mechanism tended to jam up, as did the mechanisms of all revolvers being used at the time not just the Webley Fosberry. It was the mud and crud of World War I that would ensure the revolver would be replaced by the automatic pistol by the time of the outbreak of World War II. 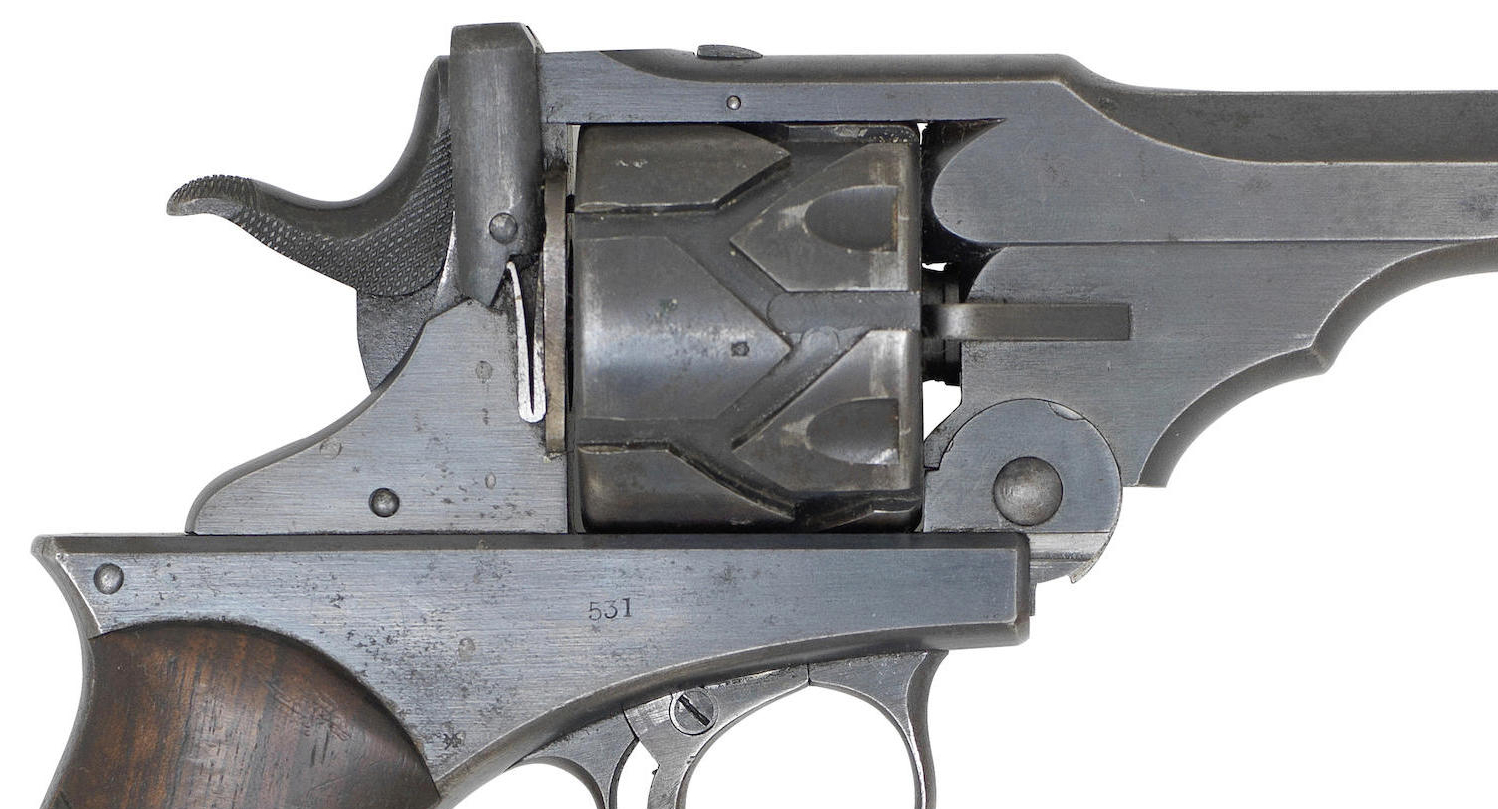 The serrations on the hammer are for pulling the action to the rear as on a conventional automatic pistol. (Picture courtesy Bonhams).

In operation the Webley Fosberry is easy enough to understand. As the hammer falls discharging a cartridge the recoil energy forces the upper section of the pistol which houses the barrel and cylinder rearwards about 7/8″. As the barrel and cylinder assembly moves rearward the angled slots in the cylinder part rotate the cylinder. Once the barrel and cylinder assembly have reached battery they then move forward under spring pressure which uses the other part of the “V” diagonal in the cylinder to complete rotation of the cylinder so it indexes the next cartridge and the weapon is ready to fire again. One of the reasons the Webley Fosbery was popular with pilots was that all the cartridge cases stayed in the revolver, they did not have a chance to eject and drop down the pilot’s shirt front. If you have ever had a hot cartridge case eject into your shirt you will appreciate what a distractingly uncomfortably experience this can be. 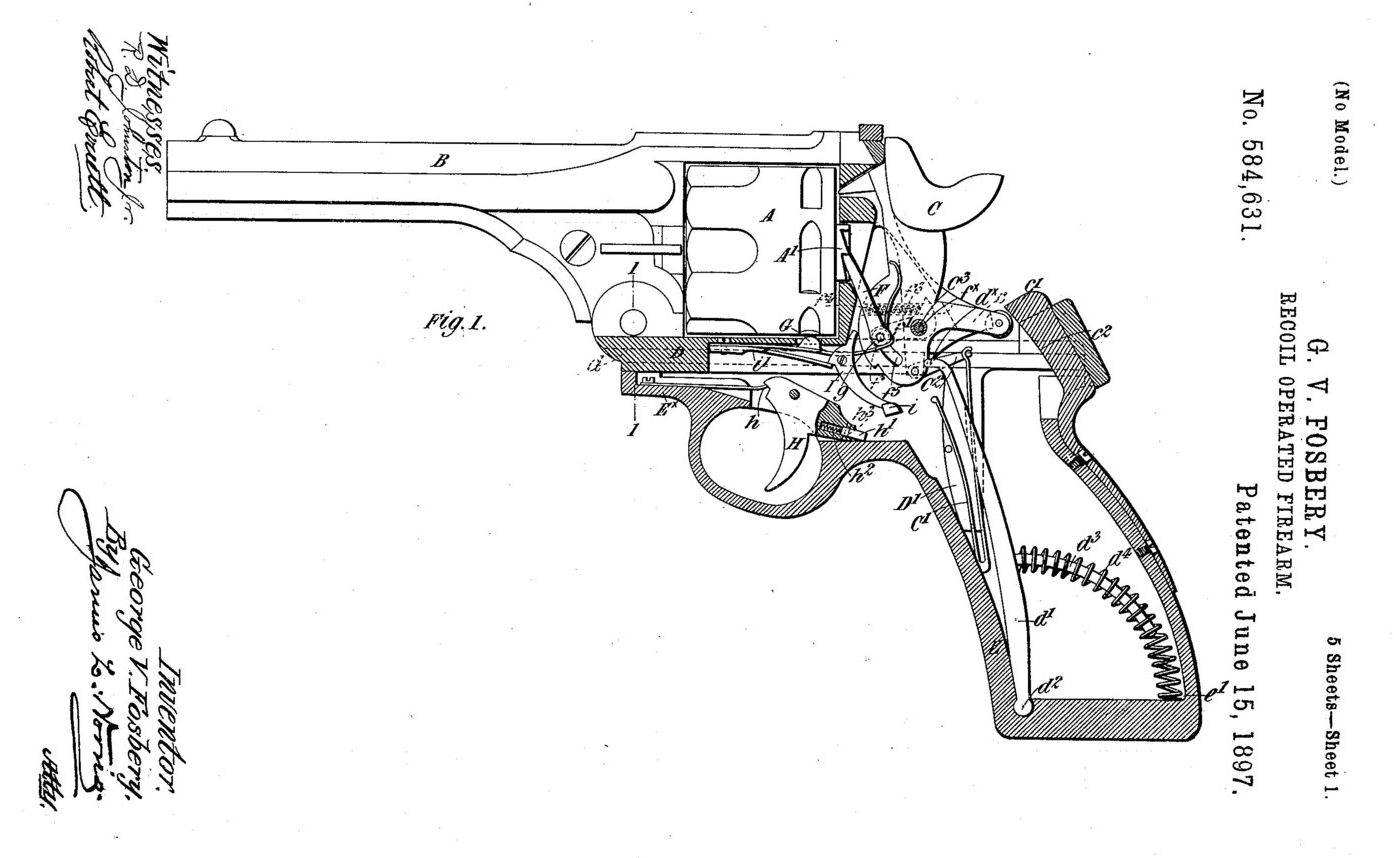 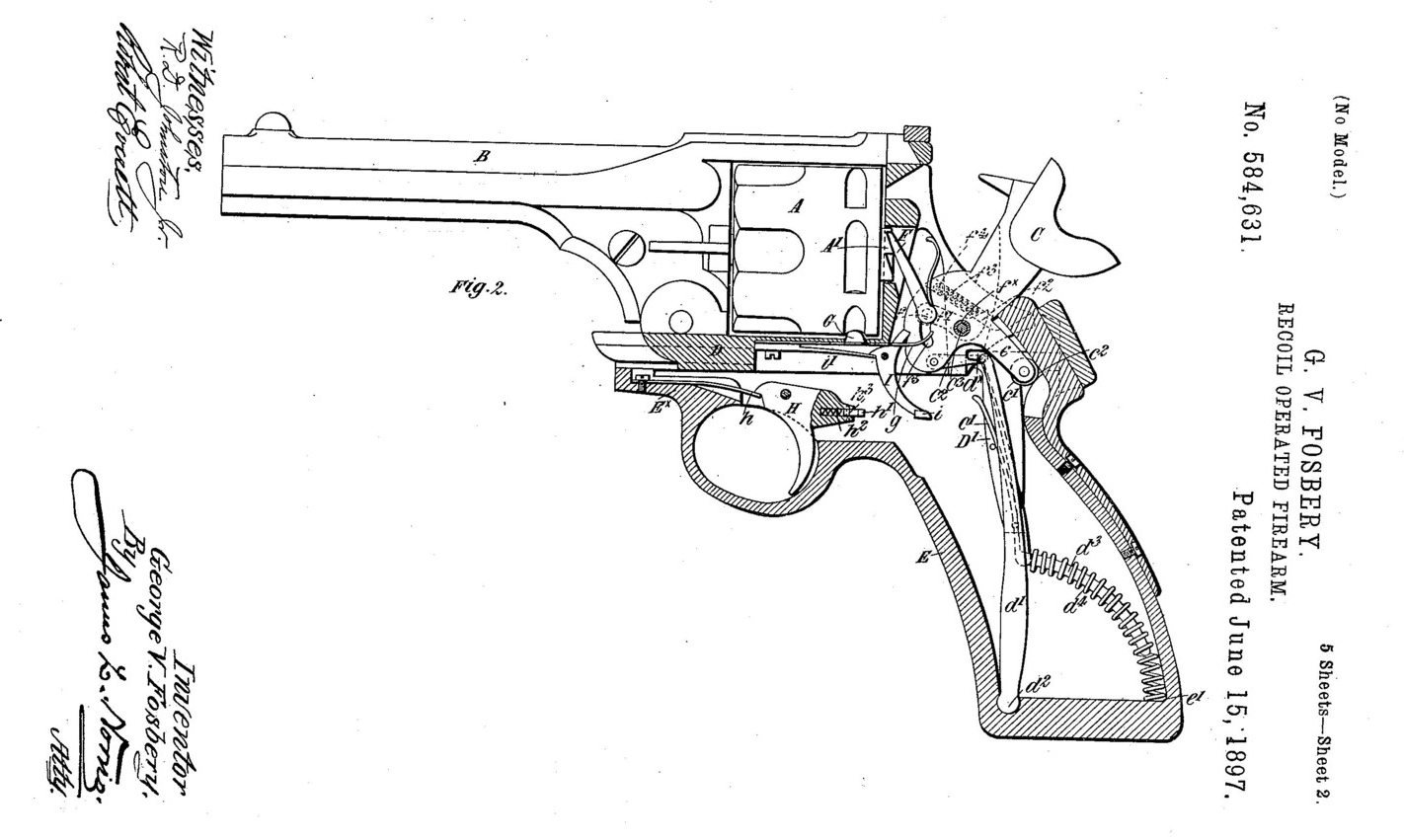 The Webley Fosbery was made in the British service calibre .455 (standard rimmed revolver cartridge) as a six shot weapon and also in .38ACP (.38 Automatic) as an eight shot weapon. Although the .38ACP is a semi-rimmed cartridge and in theory could headspace on that semi-rim in the Webley Fosbery’s cylinder extraction required the use of a special moon clip. The Webley Fosbery automatic revolver garnered much interest when it was demonstrated and shot competitively at Bisley, people were astonished at the rapidity of accurate aimed fire possible with it. 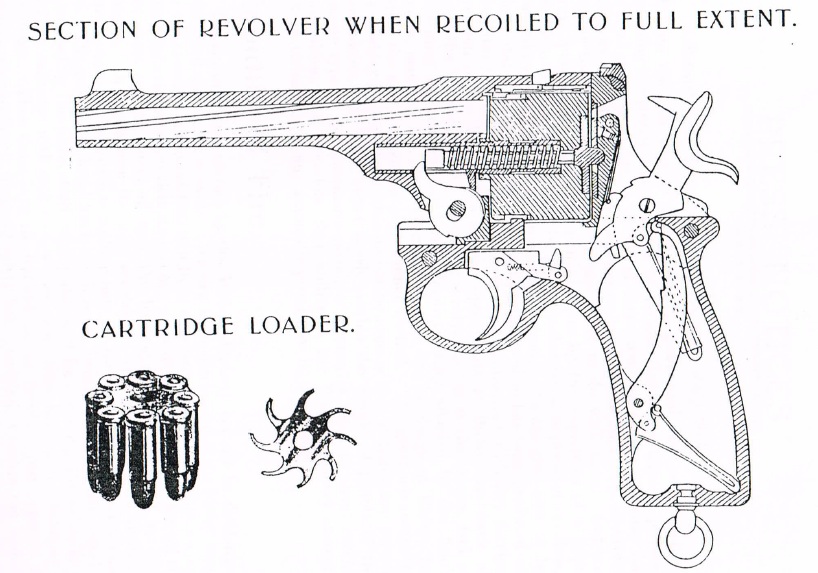 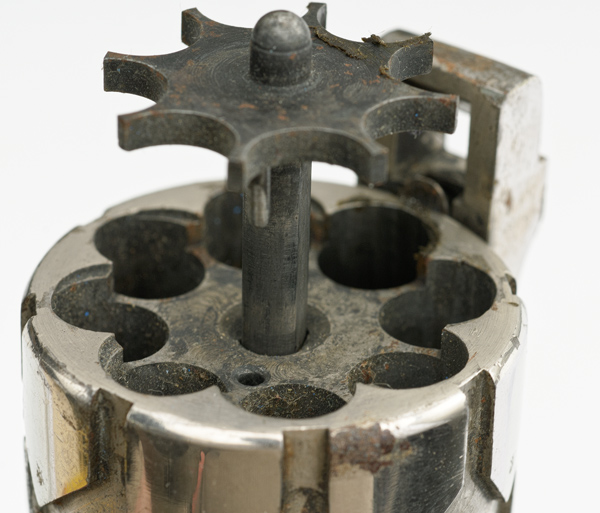 Close up of the ejector, note the grooves to fit the moon clip machined into each chamber mouth. (Picture courtesy cowanauctions.com).

The Webley Fosbery Transitional Model 1903 “Small Grip” automatic revolver we have featured in our feature at the head of this post and our close up of the action is coming up for auction by Bonhams at their Modern Sporting Guns sale to be held in London, UK on 12th May 2016. The revolver was originally sold in Australia and is engraved “Cowles & Dunn., Sydney, N.S.W.” (New South Wales being a state of Australia). We don’t know if this revolver was used by a pilot in World War I although Australian pilots certainly flew and fought in World War I, beginning in the Dardanelles campaign at Gallipoli.

You will find the sale page for this Webley Fosbery automatic revolver if you click here.

The Webley Fosbery is a fascinating revolver that had great potential but was pushed aside by other technologies. But if you were a World War I pilot trying to shoot the Hun pilot who was trying to shoot you the Webley Fosbery ensured you weren’t going to be distracted by having a hot cartridge case dropping into your shirt at the precisely wrong moment. 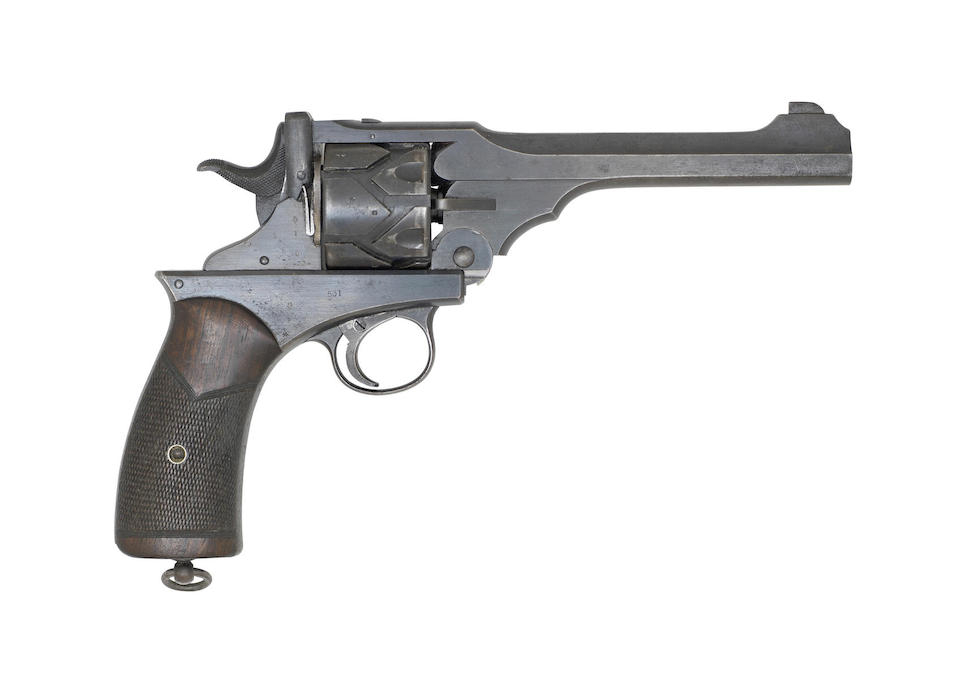