With the Second World War ended and with that an end to making motorcycles for the war effort Indian returned to civilian motorcycle manufacture and created what would become their last and greatest motorcycle, the 1947 Indian Chief. It was to be a wonderful motorcycle and nowadays an Indian Chief will attract a five figure price, rather more than the US$800.00 it cost new depending on model and options. But it was too late to save the company and Indian ceased operations in 1953.

For the 1947 Indian Chief, Indian created three models to suit customer’s tastes and pocket books. The base model was the Clubman and it was a bare bones bike. The Clubman had painted handlebars, wheel rims and crash bars, keeping costs down, but it still had chromed air cleaner cover, rear bumper, exhaust system, brake lever, gear shift lever, rear suspension spring shrouds and fuel tank caps. There was also a neat alloy trip around the mudguards. So it was a practical non-flashy bike for the person looking for a non-ostentatious machine.

The next model up in the 1947 Indian Chief range was the Sportsman. The chrome work for this bike added chrome handlebars and headlamp and crash bars. The Sportsman also received a de-luxe seat.

The top of the line model however was the Roadmaster, like the one we are featuring that is coming up for sale by RM Sotheby’s in July. The Indian Chief Roadmaster had all the bells and whistles including additional twin riding lights, chromed handlebar cross tube, the Indian Chum-Me seat which could seat two so you could take your friend riding along with you, and saddlebags with chrome rivets. The Chum-Me seat featured adjustable springing as can be seen in the pictures above and below.

Indian provided a large range of optional equipment for the 1947 Indian Chief including front mudguard bumpers (which our feature bike is not fitted with).

By the time Indian Motocycle (Note: yes that is the correct spelling) brought their 1947 Indian Chief model to market they were a struggling company. They had developed a new model motorcycle during the war at the request of the Department of Defense which was based on the twin cylinder German BMW R71 complete with shaft drive that had proved itself to be so reliable in the desert dust and sand of North Africa. When the Department of Defense abruptly canceled the order refusing to pay for the bikes ordered and already manufactured this left Indian out of pocket and with an inventory of a few hundred bikes which they sold for US$500.00 each after the war. Interestingly Indian seems not to have wanted to market this new model they had developed but stuck with the older design engine. On the other hand the Soviets quite happily went ahead and made their own version of the BMW R71 which is in production to this present day as the IMZ Ural.

The frame of the 1947 Indian Chief had the Spring Cradle Frame with compliant girder forks as used on military models. As for riding the bike the throttle was in the left grip, the manual spark advance in the right grip and the foot rocker clutch enabled shifting the three gears via the gear lever on the side of the tank. These controls were reversible and you can find Indian Chiefs with the gear lever on the left side of the tank for example, and the same was possible with the Jockey Shift gear lever.

Our feature 1947 Indian Chief Roadmaster is coming up for sale by RM Sotheby’s at their Motor City Auction to be held on 30th July 2016 at The Inn at St. John’s, Plymouth, Michigan, USA.

You will find the sale page for this very pretty motorcycle if you click here.

At time of writing the specific details of this bike had not yet been published but the timing of this post should ensure potential buyers have time to research this bike and consider budget etc. No doubt contacting RM Sotheby’s staff will enable all questions to be answered. This certainly looks to be one of the most desirable motorcycles to be up for sale this year. 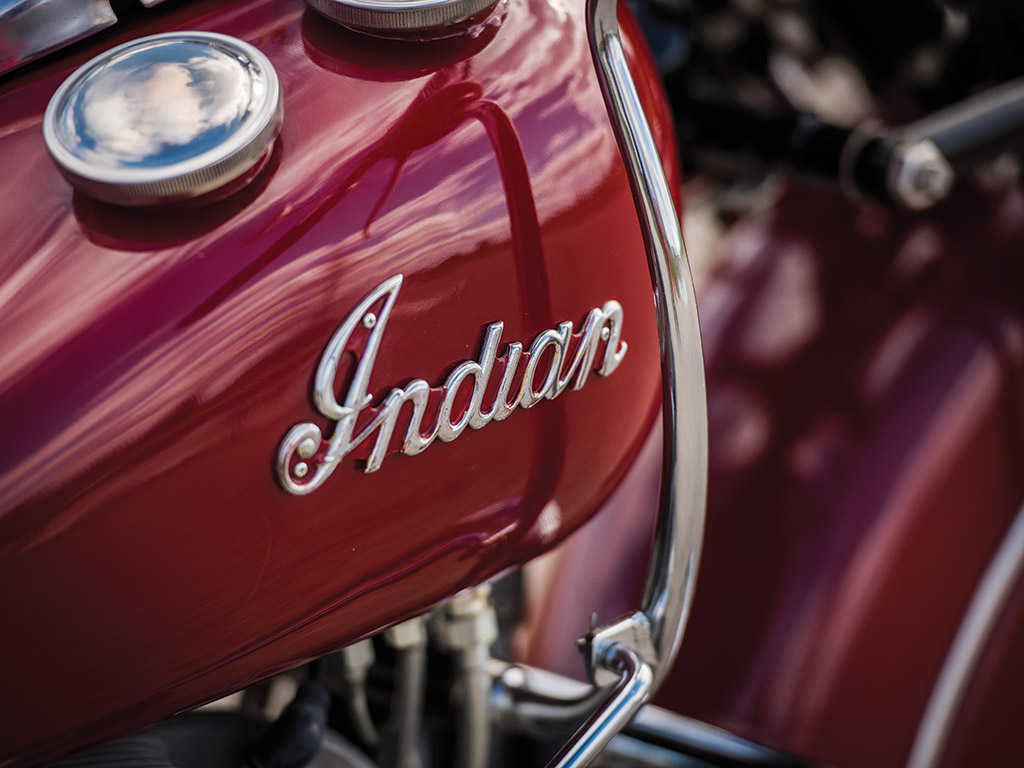