I wonder if you’ve ever considered that the artillery and naval guns of the First and Second World Wars were single shots? Most artillery guns probably still are. My own father served as a D.E.M.S gunner (Defensively Equipped Merchant Ship) during the Second World War, and after the war he would take my brother and I to the Chatham Navy Days in Britain each year, so I had the opportunity to see the large naval guns and was shown how they worked. These big guns were single shots which used a sliding breech block to secure the action behind the shell before firing. 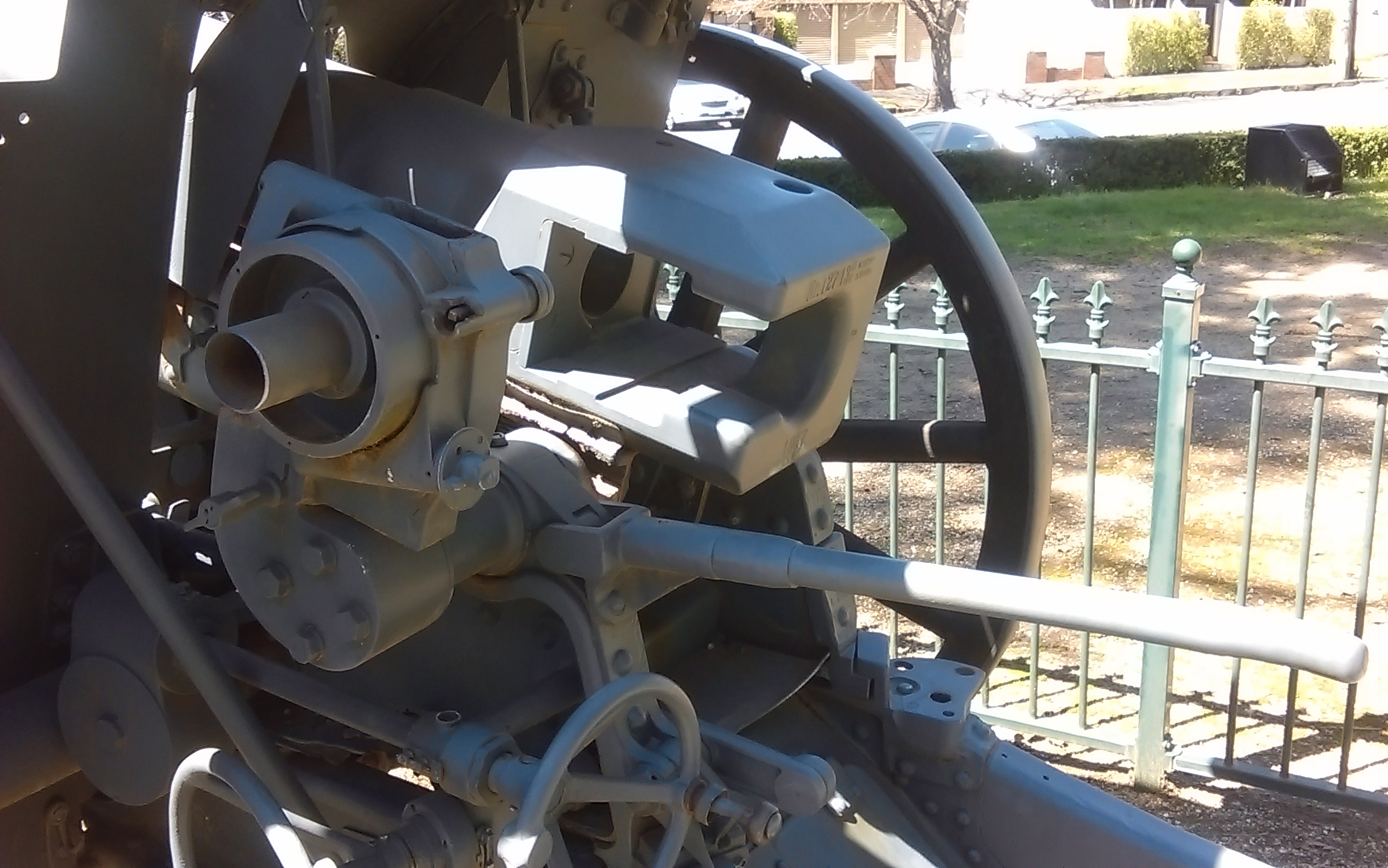 Single shot action of a German First World War vintage FK 16 77mm field gun. The breech block has been removed as the gun is nowadays on display in a park.

To fire one of these big guns a shell was manually loaded into the breech, the breech block was slid closed behind it, and then the gunner operated the firing mechanism, which was often a rope, used to ensure that no-one was in direct contact with the gun when it went off. Having one’s hand on one of the big naval guns when it went off was not a good idea. On a visit to HMS Blake one year we were told the story of a gun crew member who made the mistake of having his hand resting on the gun as it went off: it apparently fractured his arm in six places, and it was only a six inch gun. Imagine what it would have done had it been a fifteen inch gun such as those carried by the battleships on both the British and German sides. 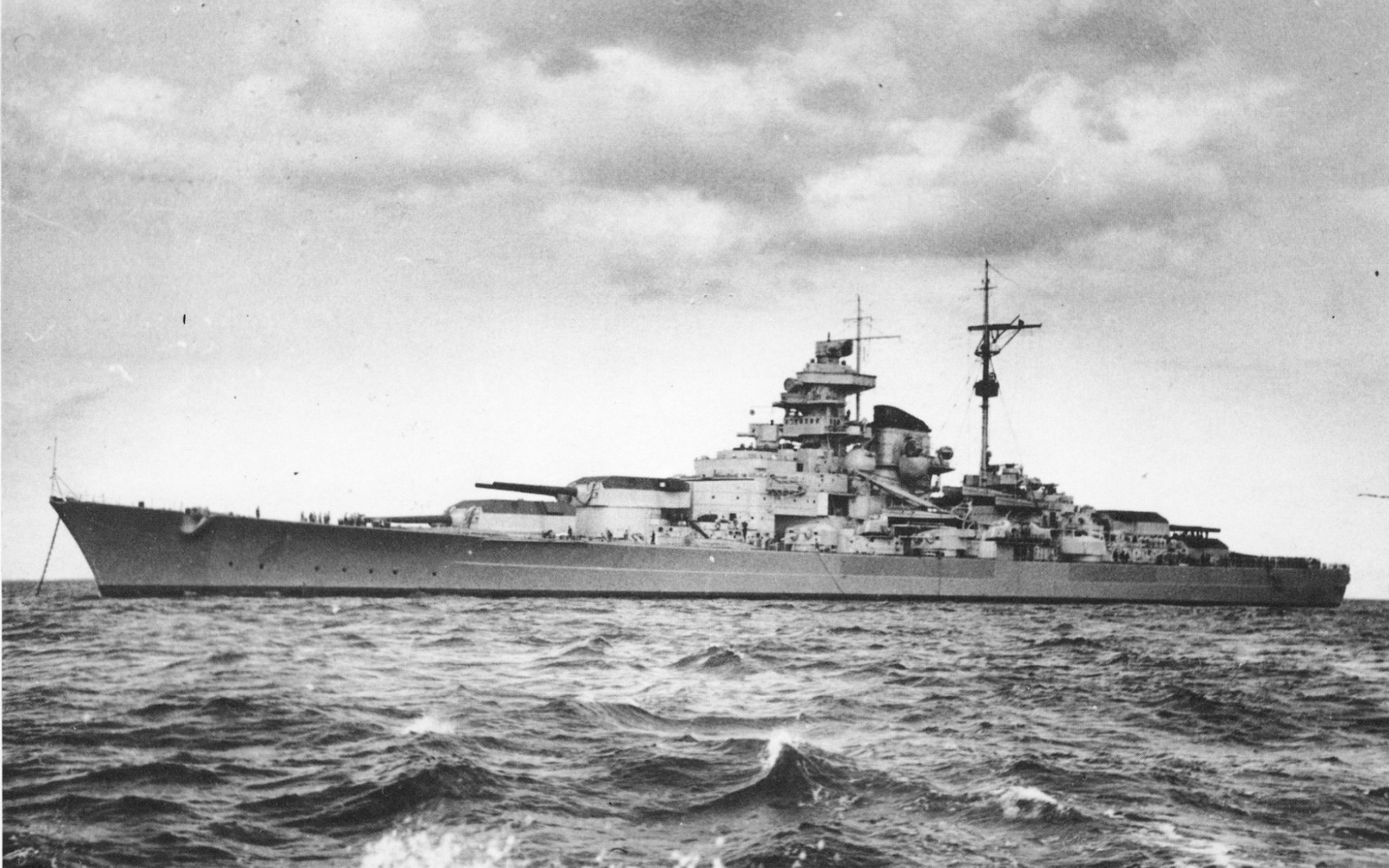 German Second World War battleship Tirpitz. Author’s father served on North Sea convoys to Murmansk to supply the Russians: so his convoys had to play cat and mouse against this ship, which they referred to as “The Devil”.

The sliding breech-block used in artillery and naval guns utilizes a relatively small piece of steel to contain the quite enormous explosive forces of an artillery or naval shell. This basic design was also used, on a much smaller scale, in small arms, especially the Farquharson sporting rifle action, which would later inspire Bill Ruger to create his Ruger No. 1 single-shot rifle.

The Farquharson and Ruger No. 1 both use an under-lever to lower the breech-block for loading and to eject a fired cartridge case. The system was much stronger than a typical break-action gun or rifle action because it used the same design principles as the naval guns, which made these falling-block single-shot rifles extraordinarily strong. The Ruger No. 1 remains today one of the strongest rifle actions extant. But what would happen if someone combined the artillery-style falling-block action to a break-action sporting rifle? We would then have a rifle action that was at least as strong as the Ruger No. 1, but with the convenience of a break-action rifle. Does such a rifle exist? Yes it does: and it is called the Prinz No. 1. 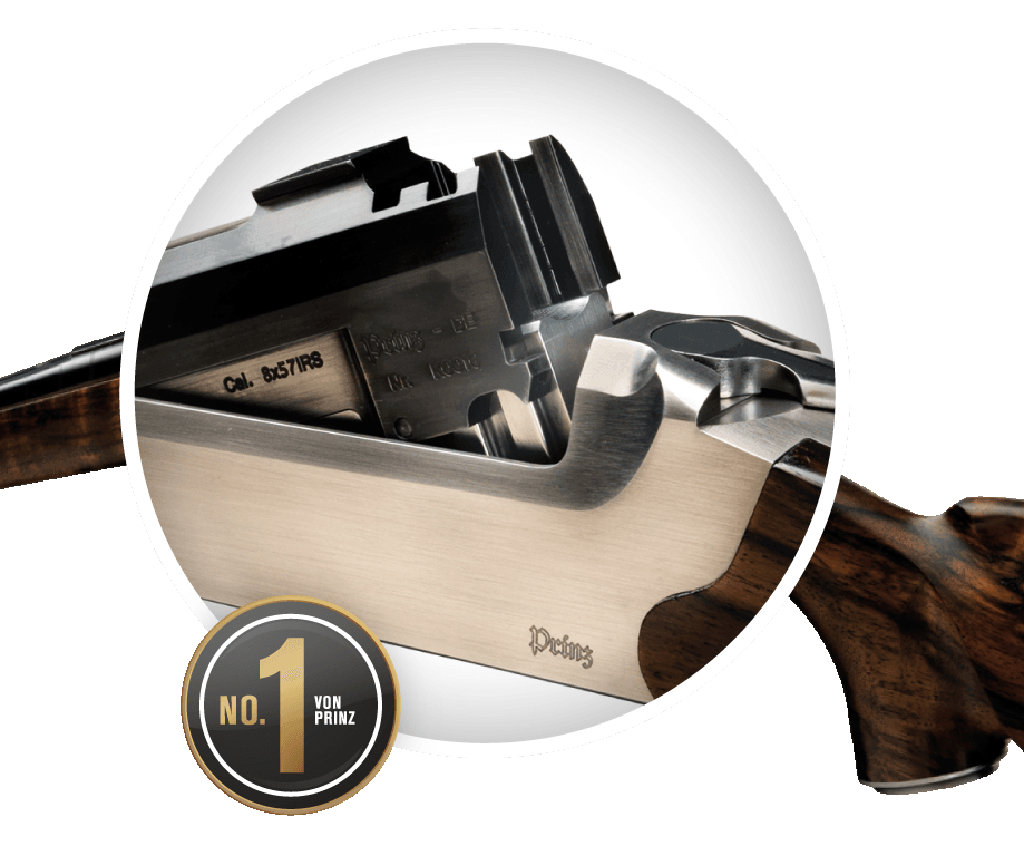 Prior to the creation of the Prinz No. 1 a break-action rifle or gun was inevitably weaker than a falling-block or bolt-action, and so rimmed cartridges loaded for break-action rifles were normally loaded to lower pressures to make allowance for this. The weakness of a conventional break-action comes about because the action is locked at the bottom, and will tend to try to open under the pressure of the cartridge being fired. To compensate for this various top reinforcing locking mechanisms have been created such as the Greener top cross-bolt, Kersten top lock, and the Rigby Rising Bite to work with the under-barrel-lugs to keep the action firmly  closed.

With the Prinz No. 1 action closed we can see that the breech-block is firmly held by four large locking lugs which are angled for optimum strength and smoothness of movement. (Picture courtesy Prinz)

The Prinz No. 1: A Break-Action Rifle with Naval Gun Technology

The break-action rifle is a superb hunting rifle whether a single-shot, or a double. The Germans refer to this style of rifle as a Kipplauf and they are known for their convenience and light weight. The action keeps the overall rifle length a few inches shorter than possible with a repeating action such as a bolt-action, and the rifle can be easily taken down by removing the barrel(s) for convenient transport. The break-action also lends itself to barrel switching so that one can have barrels in different calibers to adapt the rifle to whatever hunting activity you are planning. The Prinz No. 1 retains all those positive features: to open the rifle the shooter simply presses the top-lever to the right, this allows the barrel to be dropped down and as the action opens the falling-block is withdrawn downwards, clearing the breech so the ejector can eject the fired case. The Prinz No. 1 is just as easy to take apart as a conventional break-action single-shot or double-rifle. It is inches shorter than a repeating action rifle, and can be made lighter. The big advantage the Prinz No. 1 provides however is that it has one of the strongest sporting rifle actions in existence.

The Prinz No. 1 action and breech block are machined from chrome-molybdenum steel and nitrided. The action is hand-made and hand-fitted thus creating a high quality custom rifle. Like many European sporting rifles nowadays the Prinz No. 1 does not feature a safety catch but instead uses a manual cocking device so the striker is not cocked until the shooter is ready to fire. The fact that the striker is not cocked makes the rifle safe to handle and carry. The system provides good protection against an accidental discharge by comparison with a conventional safety system which requires the rifle to be carried “cocked and locked”. That being said these rifles that use such a manual cocking system are not necessarily a good choice for a dangerous game rifle, where the “cocked and locked” system is preferable. This is because the “cocked and locked” system better ensures that the rifle will fire immediately when needed: something that is important for the shooter’s safety if confronted with a dangerous quarry. 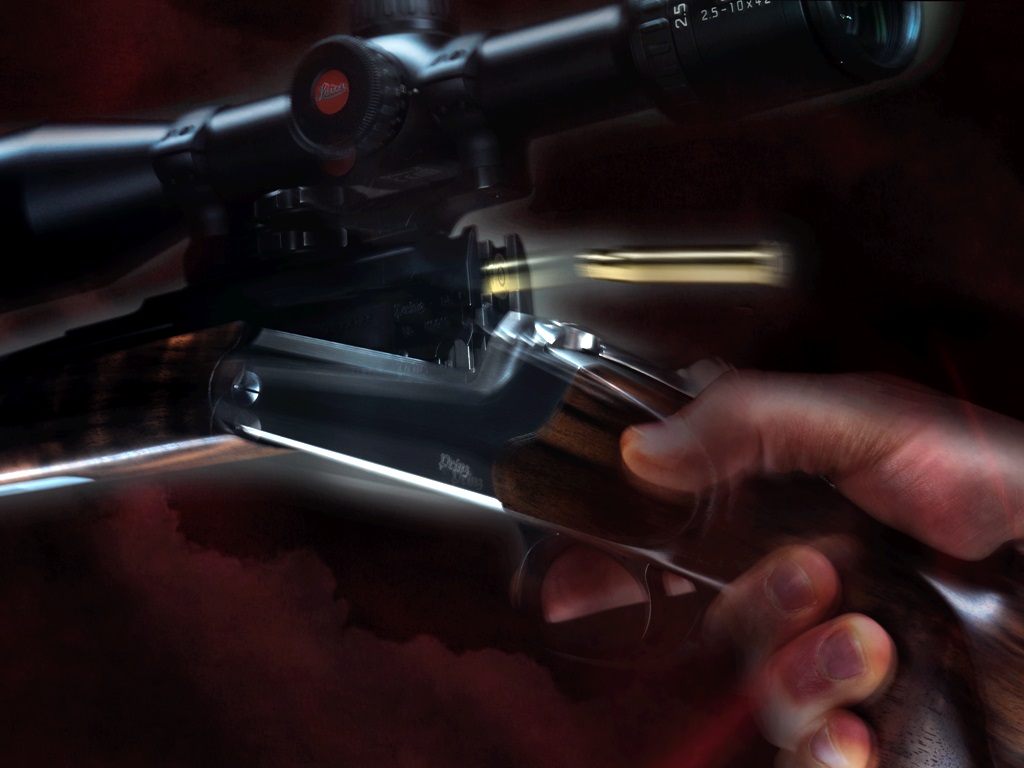 The Prinz No. 1 features an ejector to throw the fired cartridge case clear of the breech. (Picture courtesy Prinz).

Lightweight Kipplauf style rifles are at their best in hunting situations where a light and fast handling rifle is preferred. They are one of the best possible rifle designs for use in Alpine and rugged terrain, especially if the rifle will need to be carried for long periods of time. If you are planning on an Alpine Chamois hunt, a trip to New Zealand for Himalayan Tahr, or to Central Asia for an Argali or Maral, then the Prinz No. 1 would be one of the best choices of rifle you could make.

The strength of the Prinz No. 1 design means it can handle cartridges up to and including the .338 Lapua Magnum, probably the ultimate long range hunting cartridge in the world today.

Are there any disadvantages to the Prinz No. 1 action style? First and foremost we need to understand that the price of the strong artillery type breech-block is that it has to have a fairly deep recess to lock into. This means that the breech is recessed and requires the shooter to push a fresh cartridge into that recessed space. To ensure that this is kept accessible the rifle-scope should not be mounted too low. In the picture above you will see a perfect set-up with the rifle-scope set sufficiently high so that the breech is kept easily accessible. That is about the only disadvantage I can see. 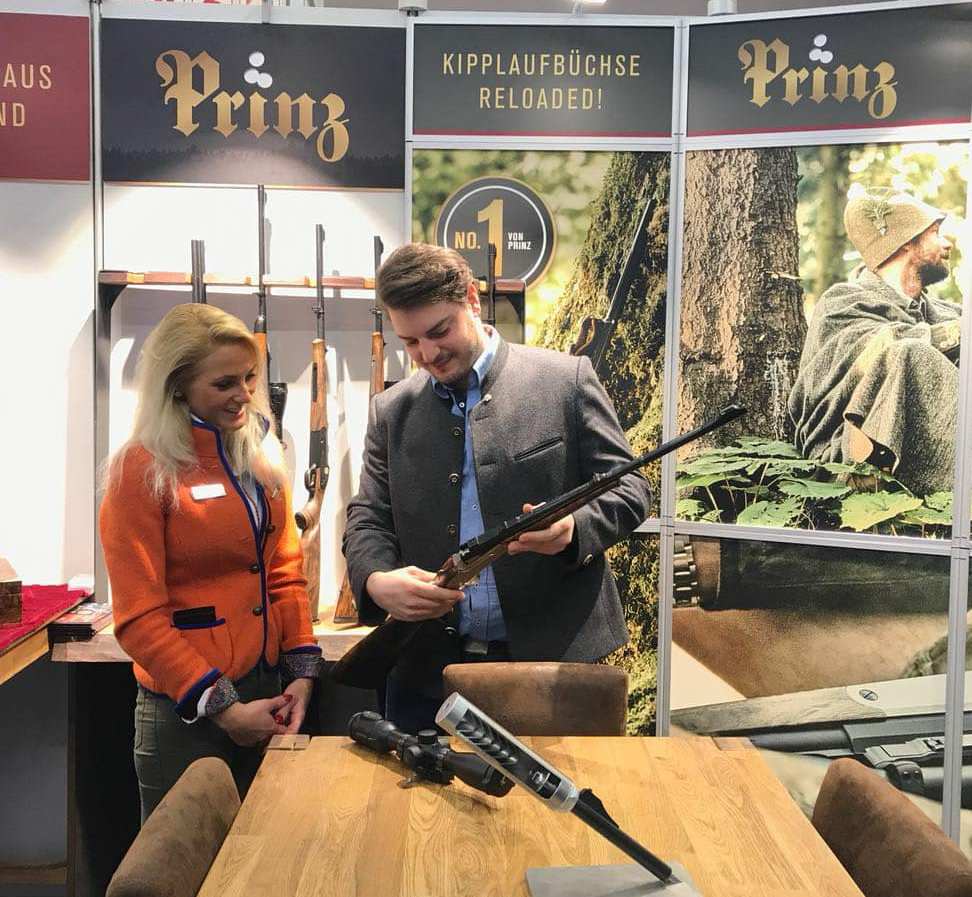 The Prinz No. 1 can be a perfect choice for women shooters because of its light weight, ease of use, ease of maintenance, and very high level of safety, including protection of the shooter from cartridge failure etc. (Picture courtesy Prinz).

The Prinz No. 1 is certainly a rifle that is inherently suitable for women shooters as it also is for men. The design lends itself to being made into a light and very handy sporting rifle that is lively handling and easy to use. The Prinz No. 1 is a very safe rifle, it is easy to open and when open its loaded/unloaded status is instantly visible. The cock/de-cock safety system adds a high level of protection against accidental discharge, and, possibly the most important of all, the system provides the best possible protection for the shooter in the event of a cartridge malfunction. The system contains any gas leakage caused by a cartridge case failure and prevents it from coming back at the shooter’s face whilst directing gas safely forward. 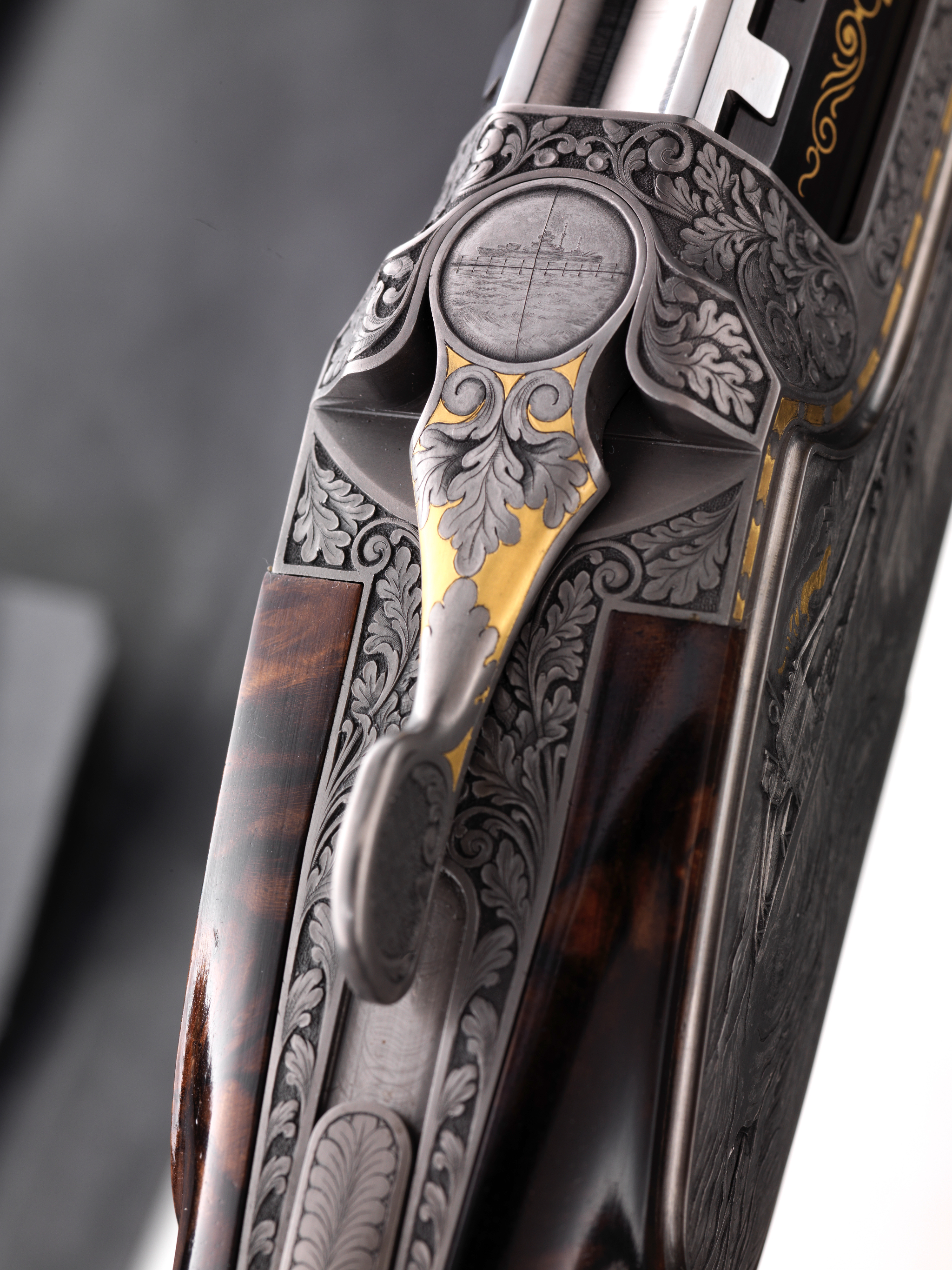 Here we catch a glimpse of the standard of engraving that can be ordered on a Prinz No. 1 rifle. This rifle is made in a German Navy theme and commemorates U-boat captain Günther Prien who managed to enter the British Scapa Flow naval base and sink the battleship HMS Royal Oak. (Picture courtesy Prinz).

If you are interested in a Prinz No. 1 falling-block single-shot rifle you should contact Oswald Prinz and discuss with him the sort of rifle you have in mind. The Prinz No. 1 is not an inexpensive rifle, but with prices starting around the €7,895 mark they are not out of reach either.

Oswald Prinz can make a Prinz No. 1 at all levels of sophistication, or simplicity, depending on your aspirations. One example of his artistry was his rifle celebrating the German Navy of the Second World War. One side of the action features famous U-boat Captain Günther Prien who managed to enter the British Naval Base at Scapa Flow and sink the battleship HMS Royal Oak.

Right side of the action of this commemorative rifle shows Günther Prien’s U-47 in action.

On the left side of the action of this rifle is depicted the German battleship Bismarck: which was the sister ship of the Tirpitz, my father’s nemesis during the war. The scene depicted is when the Bismarck was hit in the rudder by a torpedo from a British Swordfish aircraft. The rudder damage ensured that the Bismarck could not be steered and so she finished up being intercepted by British warships including the King George V and Rodney, and was sunk in the ensuing battle.

Right side of the action of this commemorative rifle shows the battleship Bismarck being hit by a torpedo from a British Swordfish aircraft.

This commemorative rifle was shown at the 2017 IWA and features in the YouTube video courtesy Leszek Kaminski shown below.

The Prinz No. 1 falling-block single-shot rifle is a superb design and we hope it does well. For the person looking for a strong and safe Kipplauf style rifle it looks to be second to none.

Prinz No. 1 German Navy commemorative rifle left side. Note the barrel stepped in the style of a naval gun. (Picture courtesy Prinz).