Back when I was involved in education I came to the opinion that all secondary school students should learn and practice the Olympic Modern Pentathlon: not the one that is currently performed at the Olympic Games where the real pistols have been replaced with dinky little laser pointers, but the original one. In order to successfully participate in this event a student would need to learn how to swim well, run with endurance, fence with an épée, ride a horse over obstacles, and shoot a pistol. This was an event that did far more than just build physical fitness, it taught mental discipline, it taught how to stand your ground, how to build a relationship with and control an animal that has a mind of its own and is stronger than you, and the fine coordination that all accurate shooting requires. This was one of the Olympic disciplines for which the Walther Olympia pistol was created.

The Walther Olympia pistol was designed to be an improvement over the Colt Woodsman that had first appeared in 1915, based on original design work by John Moses Browning. The Third Olympiad had been held in the United States in 1904 and many competitors had been entered in shooting sports events so this may have provided some motivation to Colt to create a competitive .22lr target pistol. The Colt Woodsman Target reigned supreme for about a decade until German gunmaker Walther decided to build a better gun, and they began with their Sportpistole of 1925, the model actually being introduced for the 1924 Olympic Games. The Walther Sportpistole of 1925 was made chambered for the .22lr standard velocity cartridge, had a 12 shot magazine, and a 7.4″ barrel. This model was used both for the 1924 and 1928 Olympic Games by which time Walther were thinking of improvements they could make, improvements that were to some extent inspired by work they had been doing to create their new PP and PPK pistols around that time.

Significant changes were made to the 1925 design for a new model of 1932 which was made for the 1932 Los Angeles Olympic Games. The new 1932 model would be in most respects the design that would remain the core of the pistol that would follow it, that of 1936. The 1932 model saw a reduction in magazine capacity to 10 rounds and re-location of the safety catch and magazine release to a position on the left side of the pistol and just behind the trigger guard. From the model of 1932 onwards the magazine required a wooden extension fitted to the bottom to lengthen it. This wood extension was later changed to a German version of Bakelite. 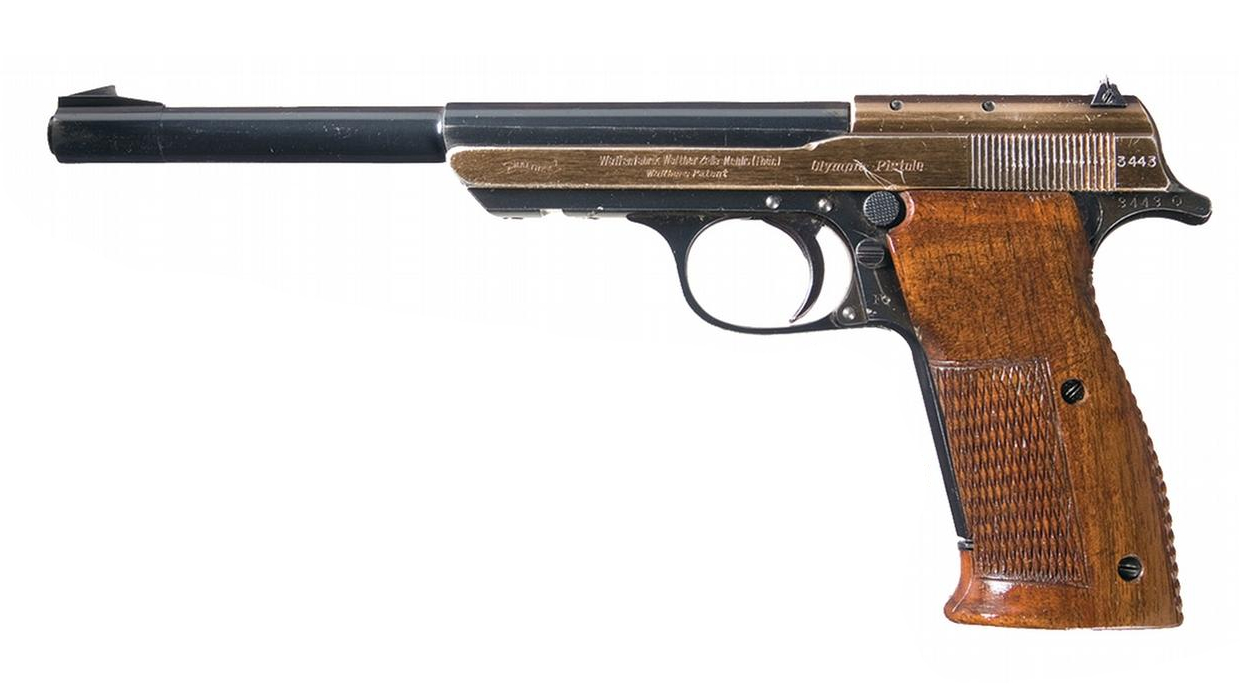 Walther Olympia pistol, model of 1936. This is the Rapid Fire Match model made chambered for the .22 Short (.22 Kurtz) cartridge. Note the slide is aluminum alloy and has a browned finish. (Picture courtesy icollector.com).

The Sport Olympia pistol featured a 7.48″ (190mm) barrel fitted with an under-barrel slot for mounting the optional weights. Trigger pull for this model may be either 1,000grams or 1,360grams depending on the Standard Pistol Match rules of the time and customer preference. Chambered for the .22lr cartridge this pistol is only suitable for use with standard velocity ammunition. The weight of this model was 1.9lb (860grams) and magazine capacity 10 rounds.

The targets used for the Standard Pistol Match were the Olympic 50meter Free Pistol targets, but the course of fire was shot at 25meters.

The Rapid Fire pistol was made chambered for the .22 Short cartridge and fitted with an aluminum slide. The aluminum slide would have been necessary to ensure the relatively weak .22 Short cartridge would cycle the slide reliably, and the reduction in reciprocating mass would also help in moderating the already small recoil. Magazine capacity for this model was 6 rounds.

During this time the Olympic Rapid Fire Match was shot at 25meters at five man sized and shaped silhouette turning targets. Courses of fire were for 8 seconds, 6 seconds, and 4 seconds.

This model was also fitted with a 7.48″ (190mm) barrel fitted with an under-barrel slot for mounting the optional weights.

The Hunter’s Pistol was made with a shorter 3.9″ (100mm) barrel and was not provided with barrel weights. Trigger pull was 1,360grams (3lb) whilst pistol weight was 1.6lb (725grams). Magazine capacity was 10 rounds. 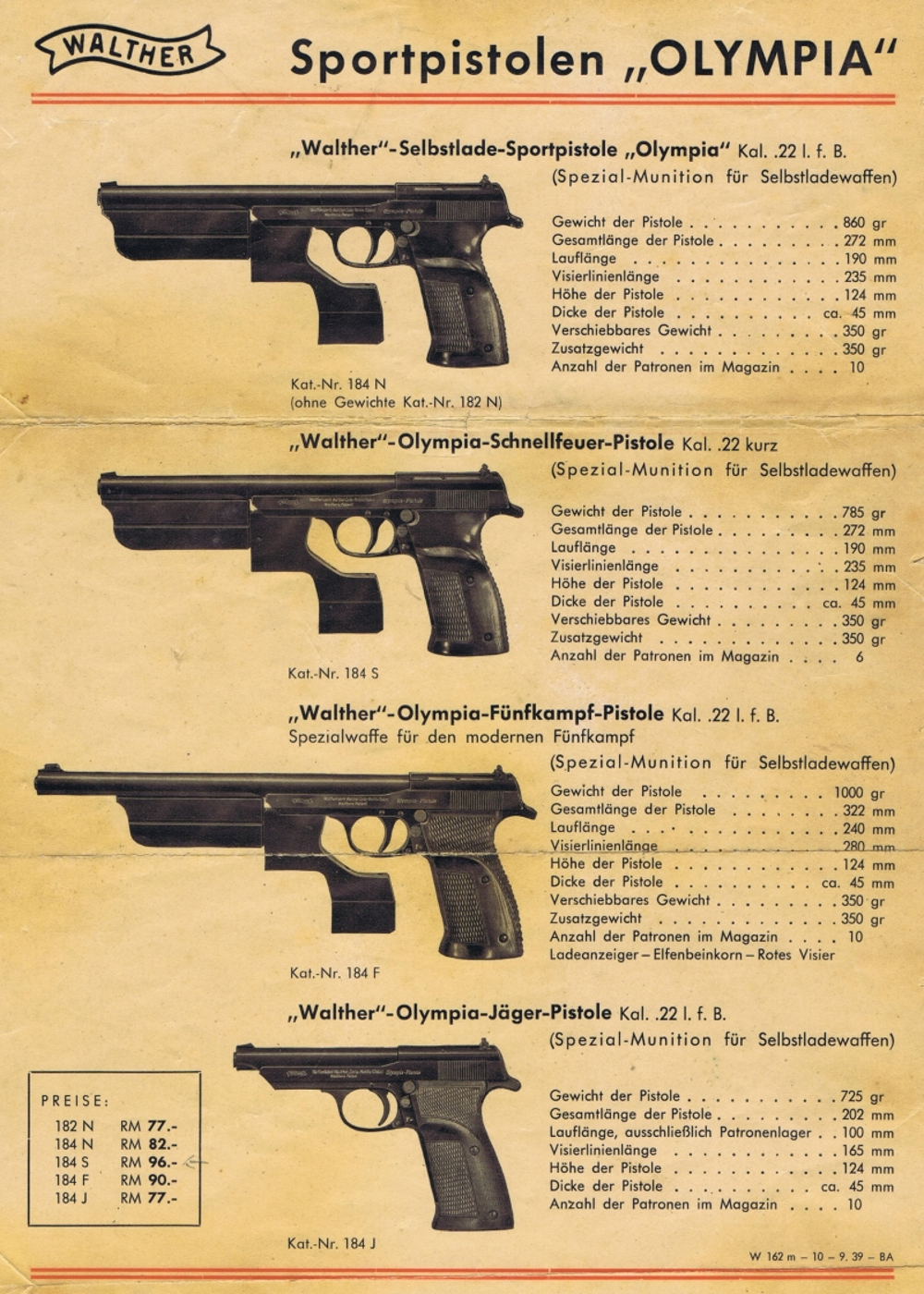 The 1936 date for the introduction of the improved model of the Walther Olympia is significant in that it was the year of the Berlin Olympics, the XI Olympiad, and Adolf Hitler’s Nazi Party government were doing all they could to show Germany as not only a great and competitive nation, but also the event was intended to show the world that the German people were indeed the “Master Race”. The Walther Olympia pistol provided the German shooters with the best tool available with which to go medal collecting and German athletes took gold medals in the Modern Pentathlon and Rapid Fire matches. That being said the pistol shooting component of the Modern Pentathlon was actually won by American Army Lieutenant Leonard who shot a perfect 200, and finished up with the Silver medal overall. To the best of our knowledge Lieutenant Leonard used a Colt Woodsman Target pistol for the competition, so the Colt Woodsman was still very much a match for the German Walther. 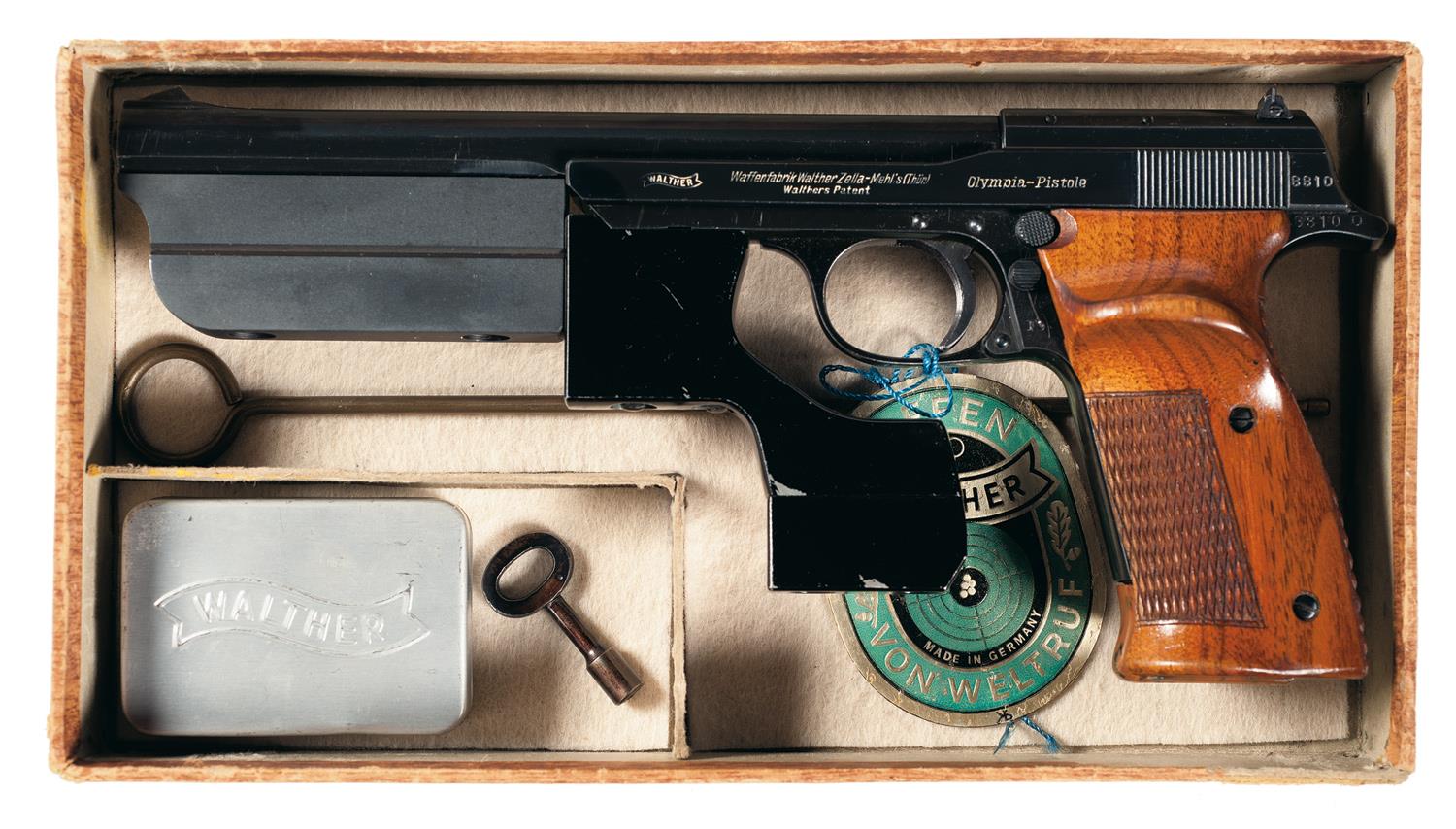 The Walther Olympia pistol was made up until 1944 when German industry was no longer able to keep up with producing pistols for sporting purposes, every effort went into trying not to lose the war. After the war the Walther Olympia was brought back into production by Swiss company Hammerli who made it as the Walther-Hammerli during the early 1950’s. The later pistols differ from the earlier ones in having a flat sided barrel and different mountings for barrel weights. The Hammerli made pistols can also be found fitted with a muzzle-brake.

For those interested in this great and historic pistol Rock Island Auction have one of the Hunter’s Olympia pistols (Olympia-Jäger-Pistole) coming up for sale at their November auction. 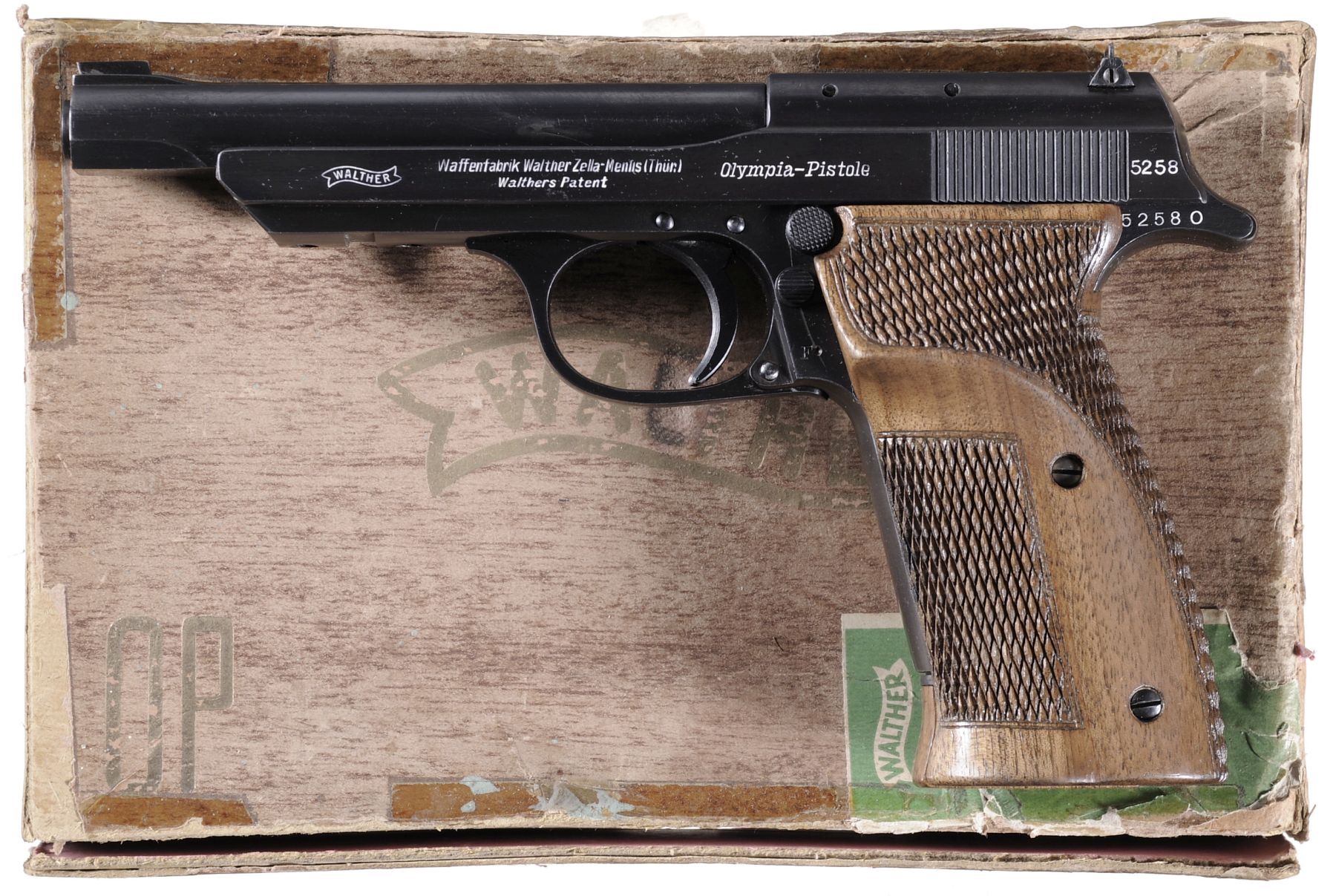 This pistol comes with an original box that is the correct type for the handgun and is expected to sell in the range USD$2,750-$3,500.

You can find the sale page for this pistol if you click here.

The condition of this pistol is described by Rock Island Auction as follows: “NC – FINE- All original finish 90% – 94% or better, some dings in wood wear commensurable with percent of finish. In working order.
PRF – PROFESSIONALLY REFINISHED OR RESTORED”

The Walther Olympia pistols were some of the most accurate target pistols of the pre-war era and they are still an accurate pistol, as well as being a historic handgun. 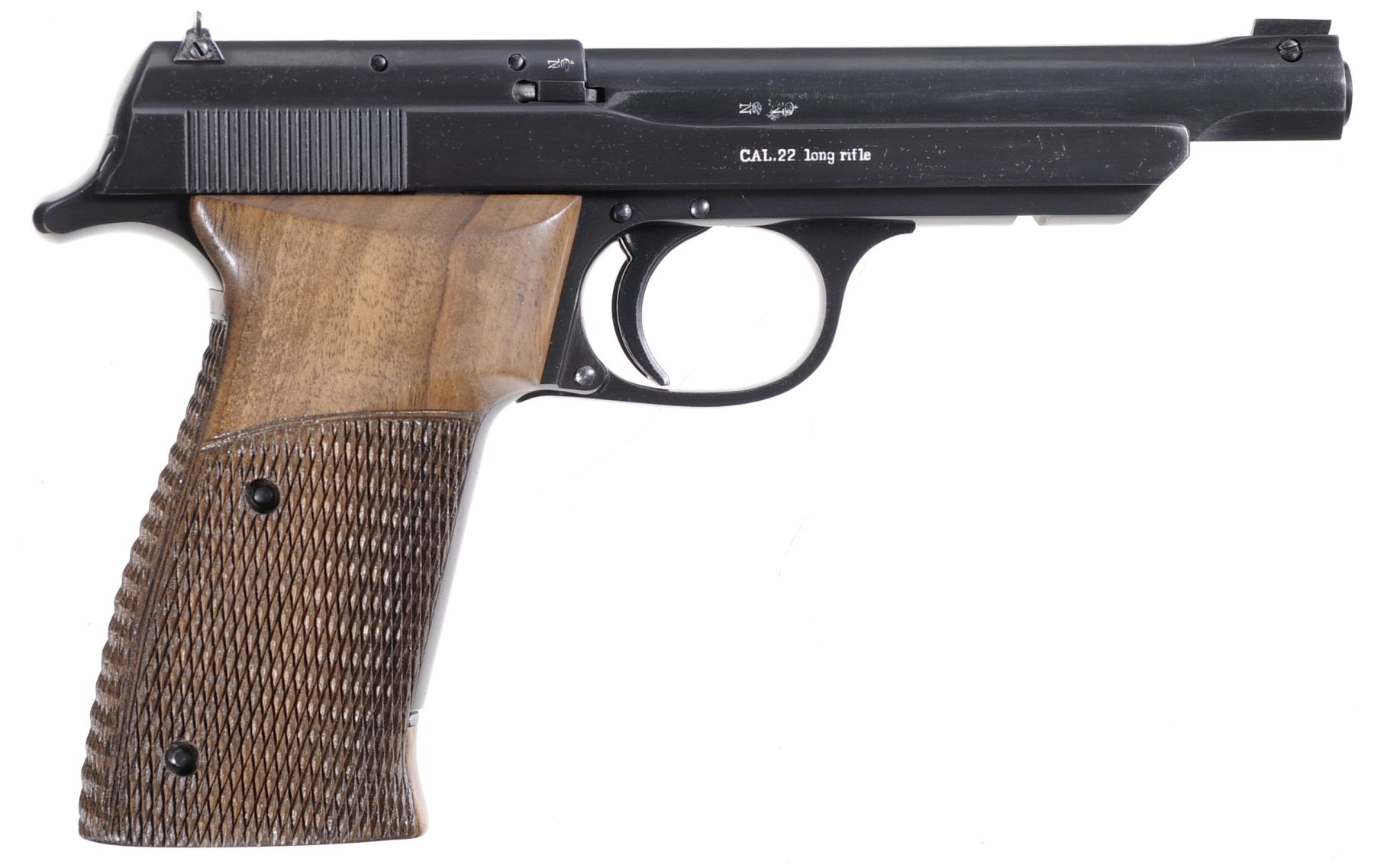