World War II was a remarkably multi-faceted conflict that left its mark on families all over the world. It was a war that was not just limited to Europe and the Pacific, but which also extended deep into Asia. On the same day they struck Pearl Harbor the Japanese also attacked Hong Kong, Thailand, and the Philippines. Their follow on from that was their advance into Burma, and the subsequent taking of Singapore. Prior to the official start of the War Japan had also invaded China and established their puppet state of Manchukuo in 1931, followed by the escalation of hostilities caused by the Marco Polo Bridge incident of 1937.

With the Japanese having established what must have seemed a nearly insurmountable strength in Asia British Commonwealth and American military leaders formulated plans to defeat them, and remove them from the countries they had invaded. One of the key components of these strategies required the supply and support of the Chinese Nationalist forces of Chiang Kai Shek in their fight to defeat the Japanese in China. In order to do this those supplies had to be delivered through a not-so-convenient back-door, a back-door that needed to wind its way from Assam in India through Burma to China. At that time no road existed: and American General Stilwell was charged with the responsibility of creating one. 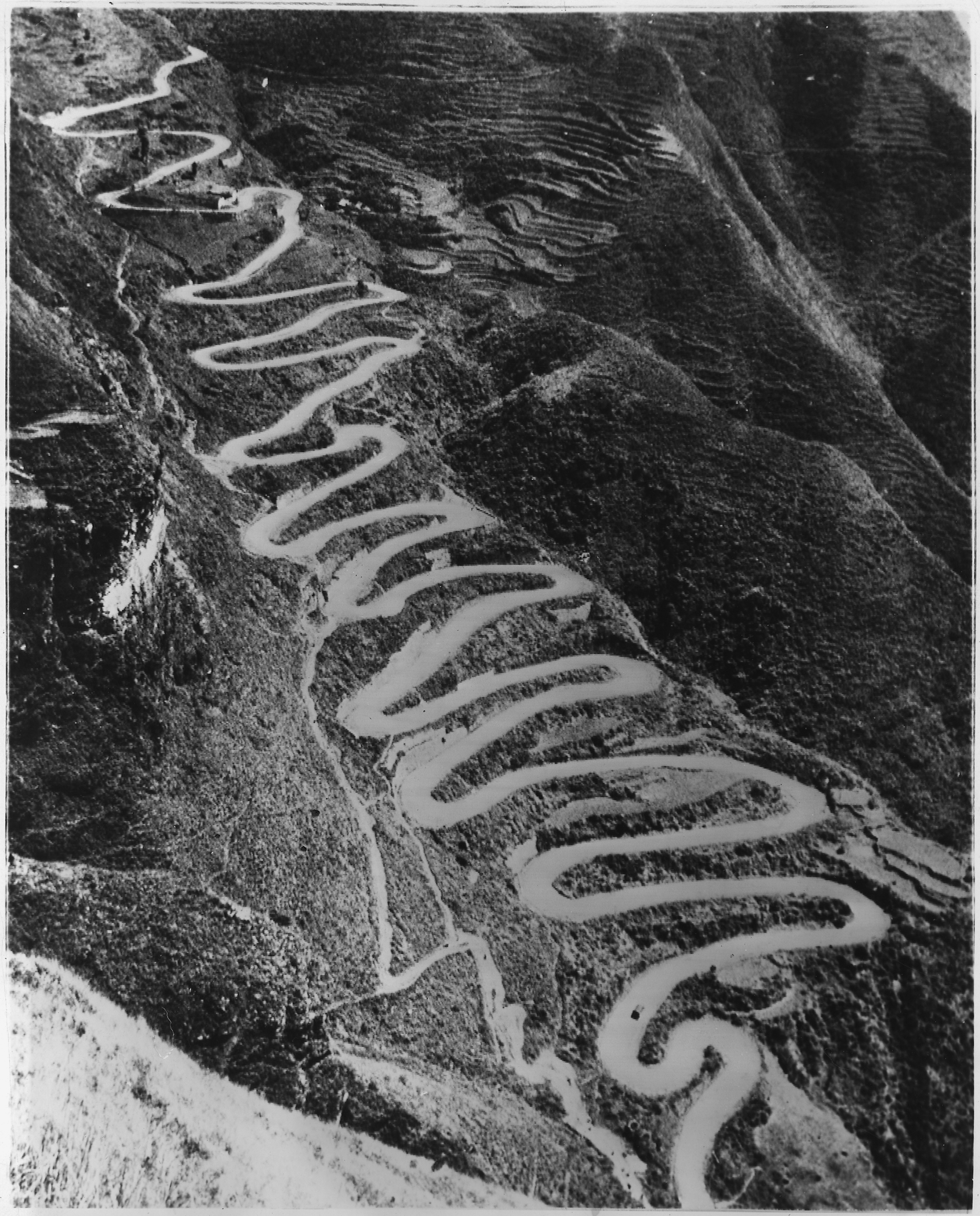 This section of General Stilwell’s “Ledo Road” gives us an idea of why having trucks with a small turning circle was necessary. (Picture courtesy Franklin D. Roosevelt Library).

The terrain through which this road was to be forged ranks among some of the most inhospitable on earth. In some sections it was necessary to move approximately 100,000 cu. ft. of earth per mile of road constructed. Doing that construction work were 15,000 American GI’s and 35,000 Burmese. Conditions were so harsh that it was estimated that the road cost the life of “A man per mile”.

For the sort of work that was required for this sort of operation in Burma, Ford created a Jeep like truck with four-wheel-drive, wide track, small 32′ turning circle, and a full 1.5 tons of load carrying capacity. Notable in the design was that the driver’s position was placed so he would have a near uninterrupted view of the track close in front of him. As any 4WD aficionado will tell you this is a great advantage when you have to negotiate a difficult rocky terrain where you need to be careful about where you place each wheel. 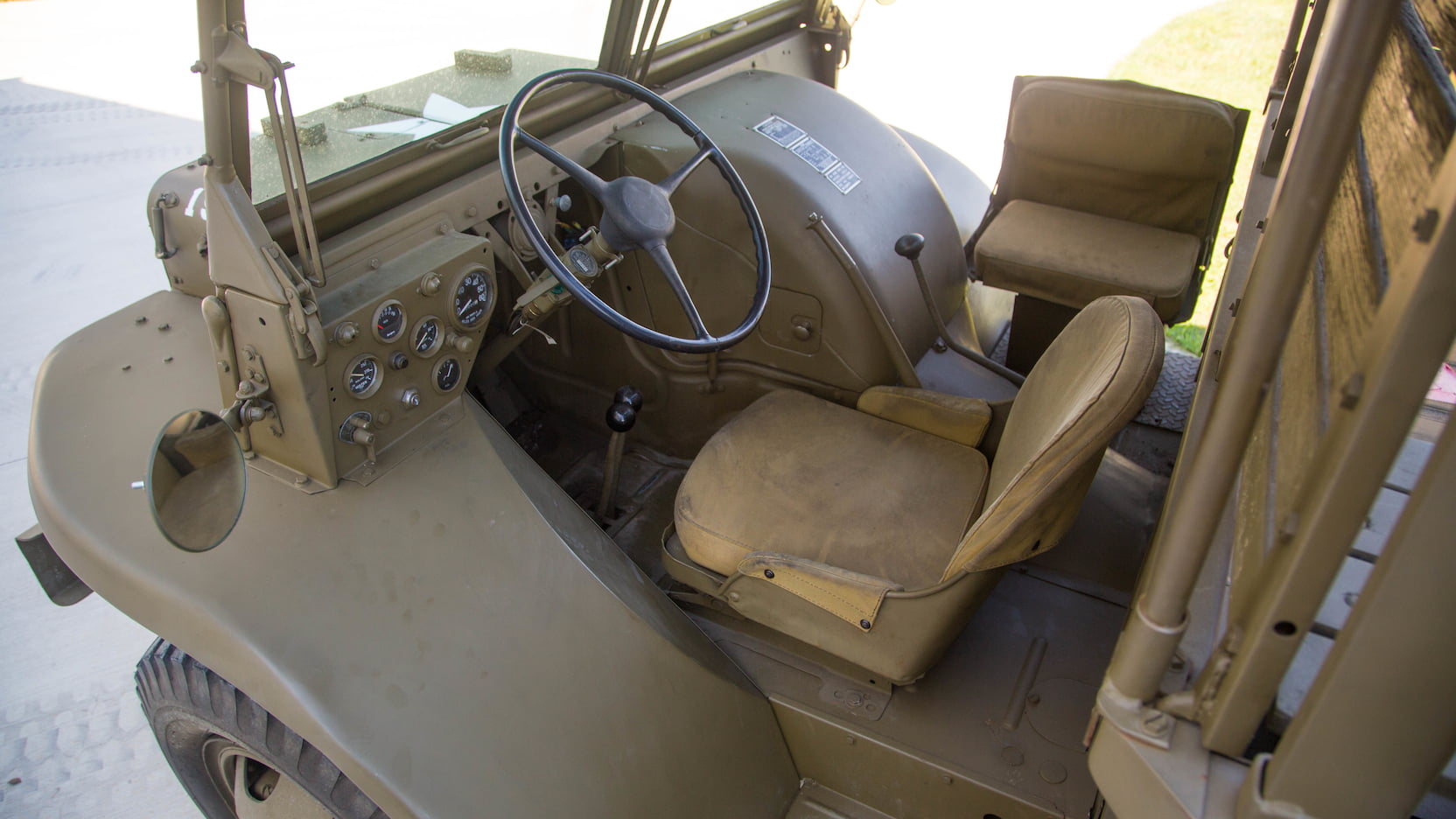 Driver’s position of the Ford Burma Jeep provides the driver with an excellent view of the track close in front of the truck: an ideal design for negotiating rocky tracks. Note how the driver’s position is set so far forward that the engine protrudes back into the cab to the extent that the passenger seat has to be located sideways.

Ford’s new “Burma Jeep” was officially designated the “GTB-G622” and was also known as the Ford GTB 1.5 ton truck. The engine of the GTB was a standard Ford in-line six cylinder four stroke “L-head” gasoline engine producing 90hp @ 3,400rpm, and capable of running on 70 octane fuel although it would no doubt have been able to use lower than that. The gearbox was a four speed with a High and Low range transfer case, and the truck’s fuel economy was around 9 miles to the US gallon depending on the nature of the driving task being undertaken. Top speed was an adequate 45 miles per hour and the fuel tank provided a useful 40 US gallon capacity to give the vehicle a decent range. 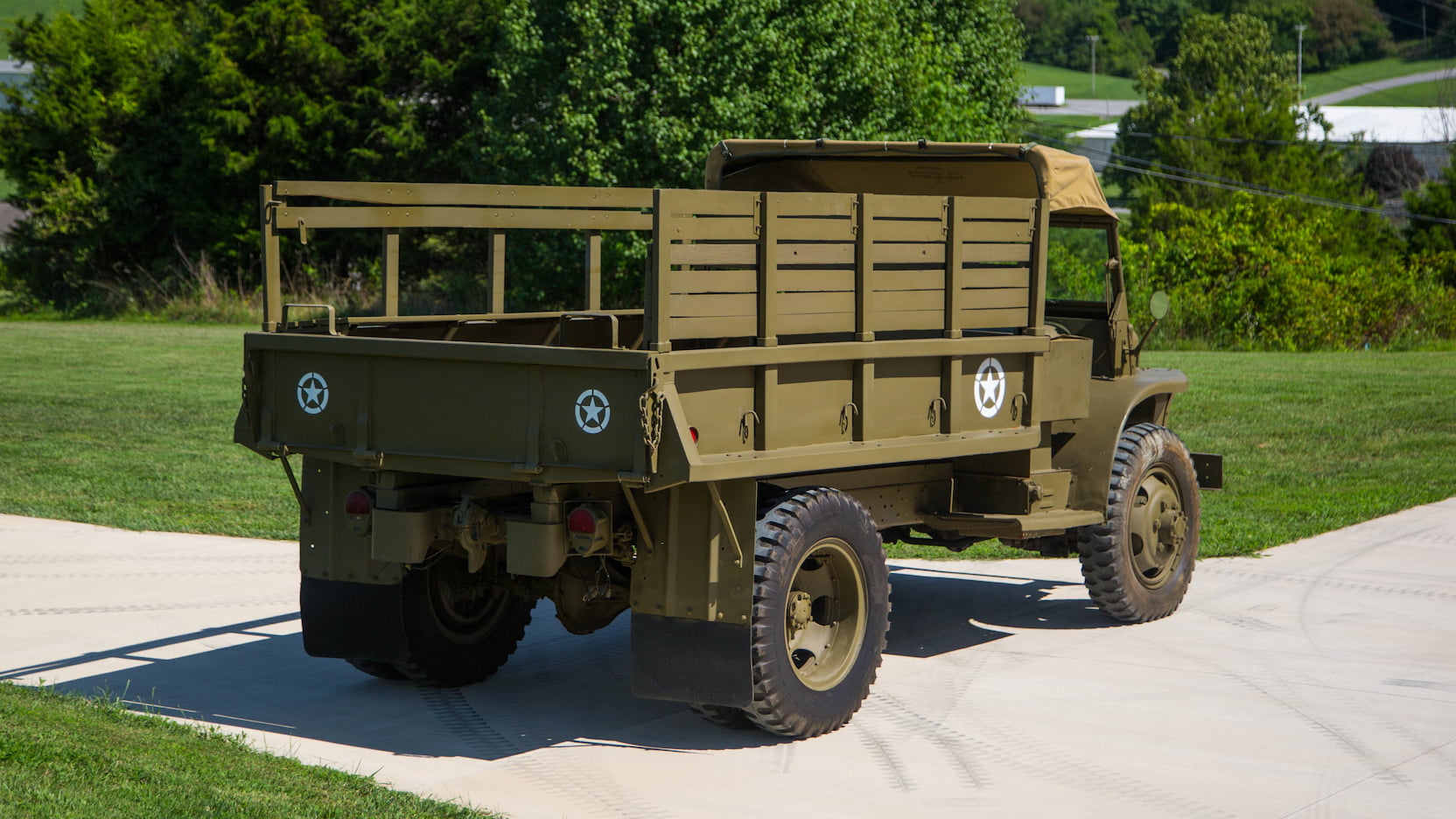 In this rear view of the “Burma Jeep” we get an impression of the wide track stability of the design. The wheel at each corner also serves to keep entry and exit angles favorable. The rear tray was rated for up to 3.000lb load.

The Ford Burma Jeep was primarily used by the USMC and US Navy, and was made in a number of different models. The base model was called the GTB-G622 and was equipped with the tray top rear sometimes with seating for troop transport. This vehicle was designated the GTBA by the USMC and US Navy although it was essentially the same truck, but painted “Ocean Gray”. The GTBS was the bomb service variant which came equipped with a useful crane on the rear for lifting bombs into position onto combat aircraft. An improved version of the GTBS was called the GTBC, both of these variants were made for the USMC and US Navy. Last but not least was the wrecking version which was called the GTBB: only about fifty of that model were made. In total there were about 1,500 of the “Burma Jeeps” made, some being equipped with a 10,000lb capacity front winch either by Braden or Garwood. 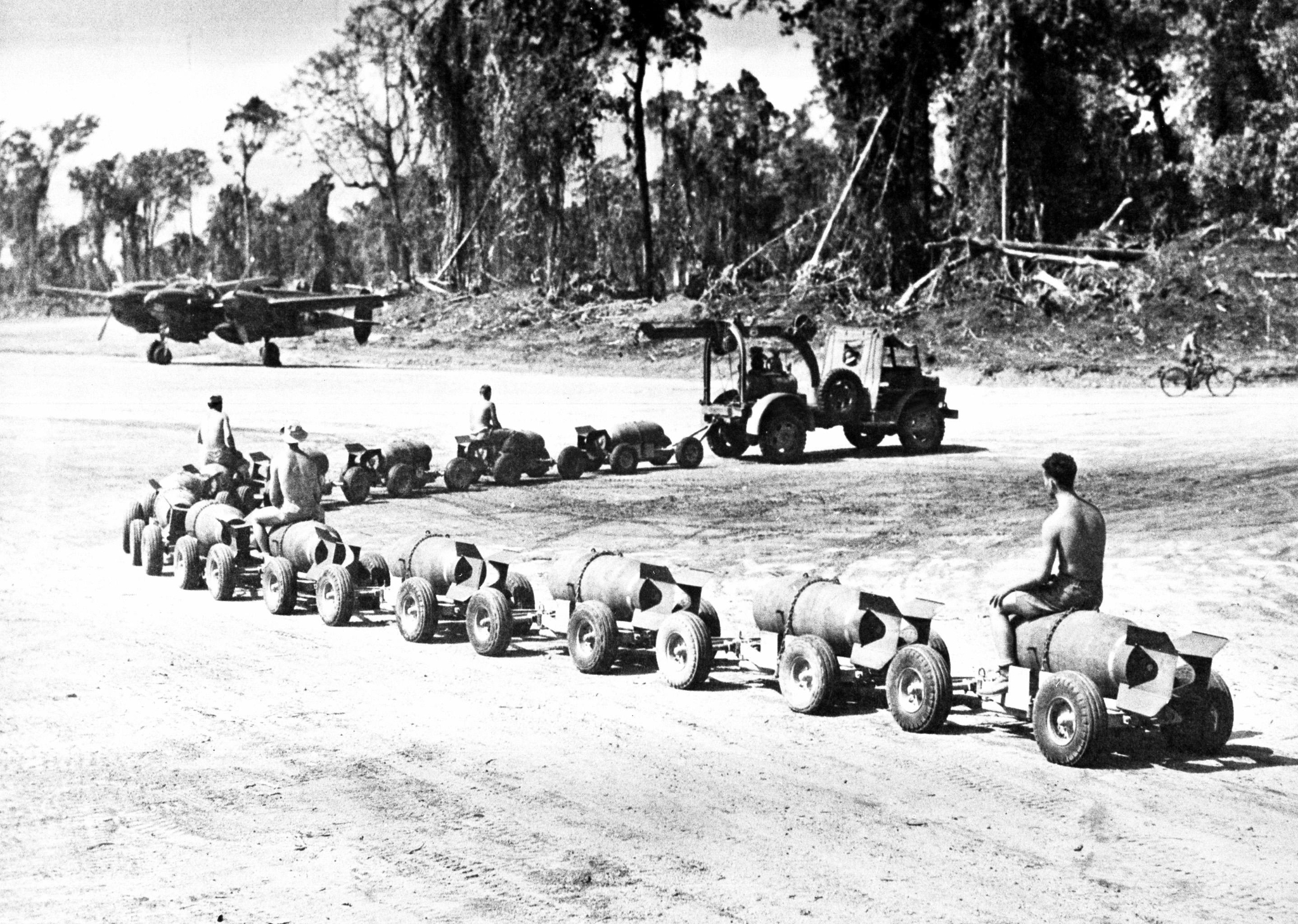 In this picture we see a GTBS bomb service truck with the rear deck mounted crane towing a little bomb train out to load combat aircraft. The guys riding on the bombs look reminscent of the ending scenes of the movie “Dr. Strangelove”. (Picture courtesy olive-drab.com).

The Ford Burma Jeeps saw service both during World War II and the Korean War before being retired and sold off as surplus. Many found their ways onto farms across the US where they were commonly used for typical around the farm work, including plowing. In the intervening years some of these survivors have been found by military vehicle enthusiasts and they occasionally turn up for sale. 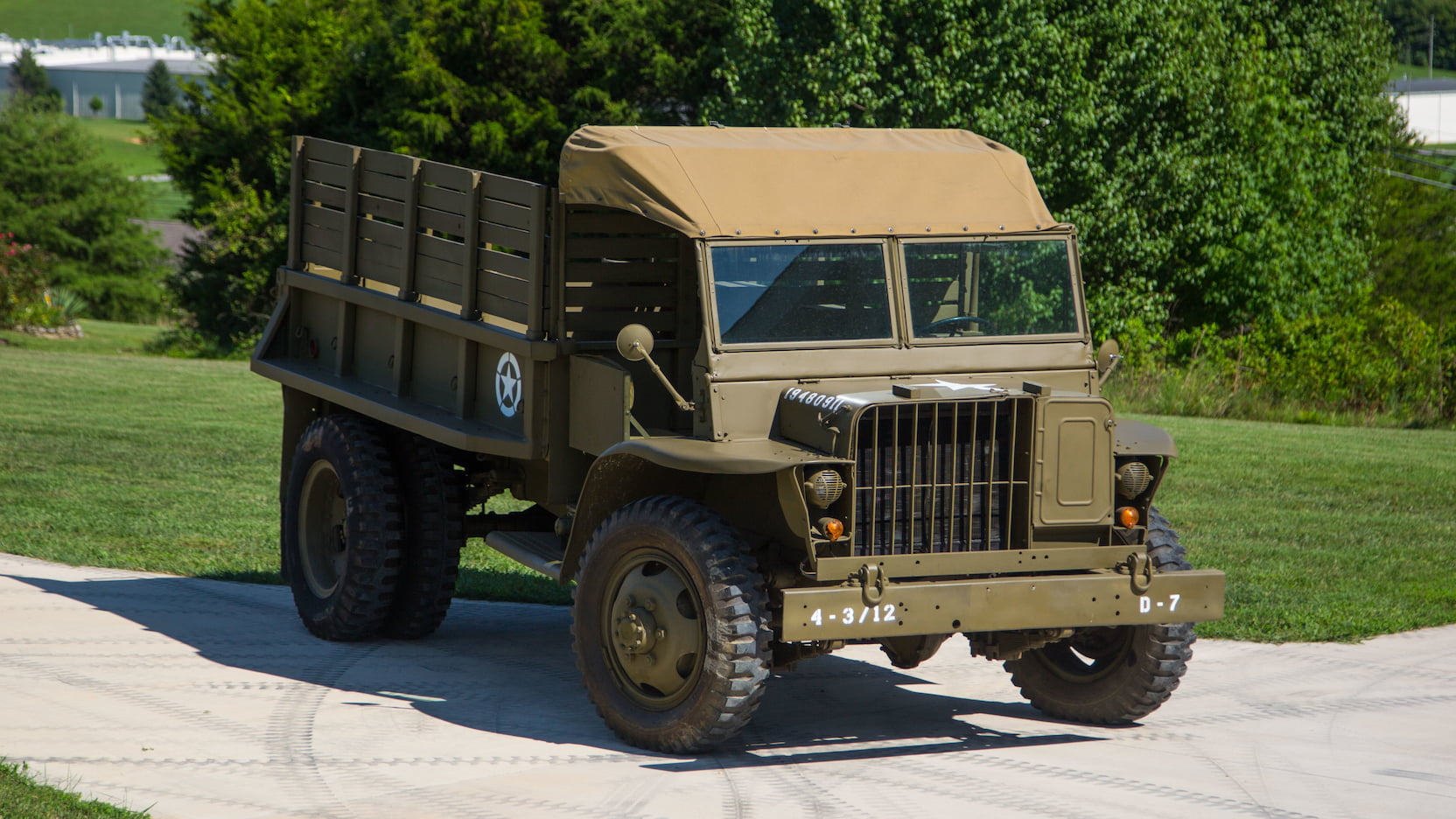 Ford Burma Jeep GTB front view. Note that the door on the right side of the grille is for the vehicle tool kit compartment.

The Ford Burma GTB in our pictures is a restored original and is coming up for sale by Mecum Auctions at their Chicago 2018 auction which runs from October 25-27, 2018.

You will find the sale page for this historic vehicle if you click here.

The Ford “Burma Jeep” GTB-G622 is an example of practical vehicle design, done by people who really understood how to make a light truck that was perfectly suited to its intended purpose. The one coming up for sale by Mecum Auctions looks to be a prime example. 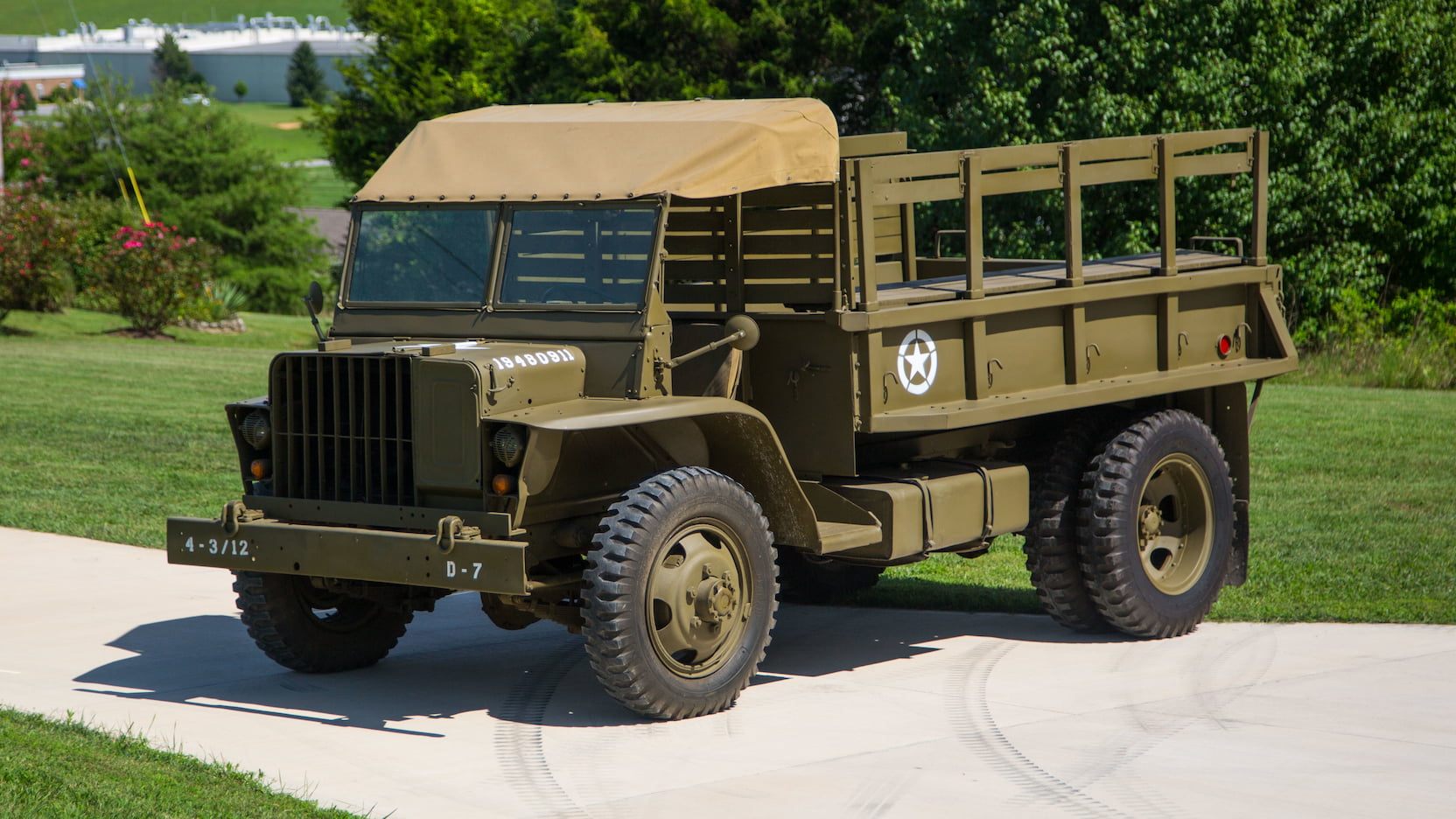 Photo Credits: All pictures of the sale Ford Burma Jeep are courtesy Mecum Auctions. Other pictures as individually noted.