The Rigby Rising Bite double rifle has always been one of the most expensive pieces of ordnance one could ever open one’s wallet for. A Rising Bite rifle takes about three years to make, which means you are not just paying for the steel and the wood, but making a substantial contribution to the salary of the gunmakers for that period of time. 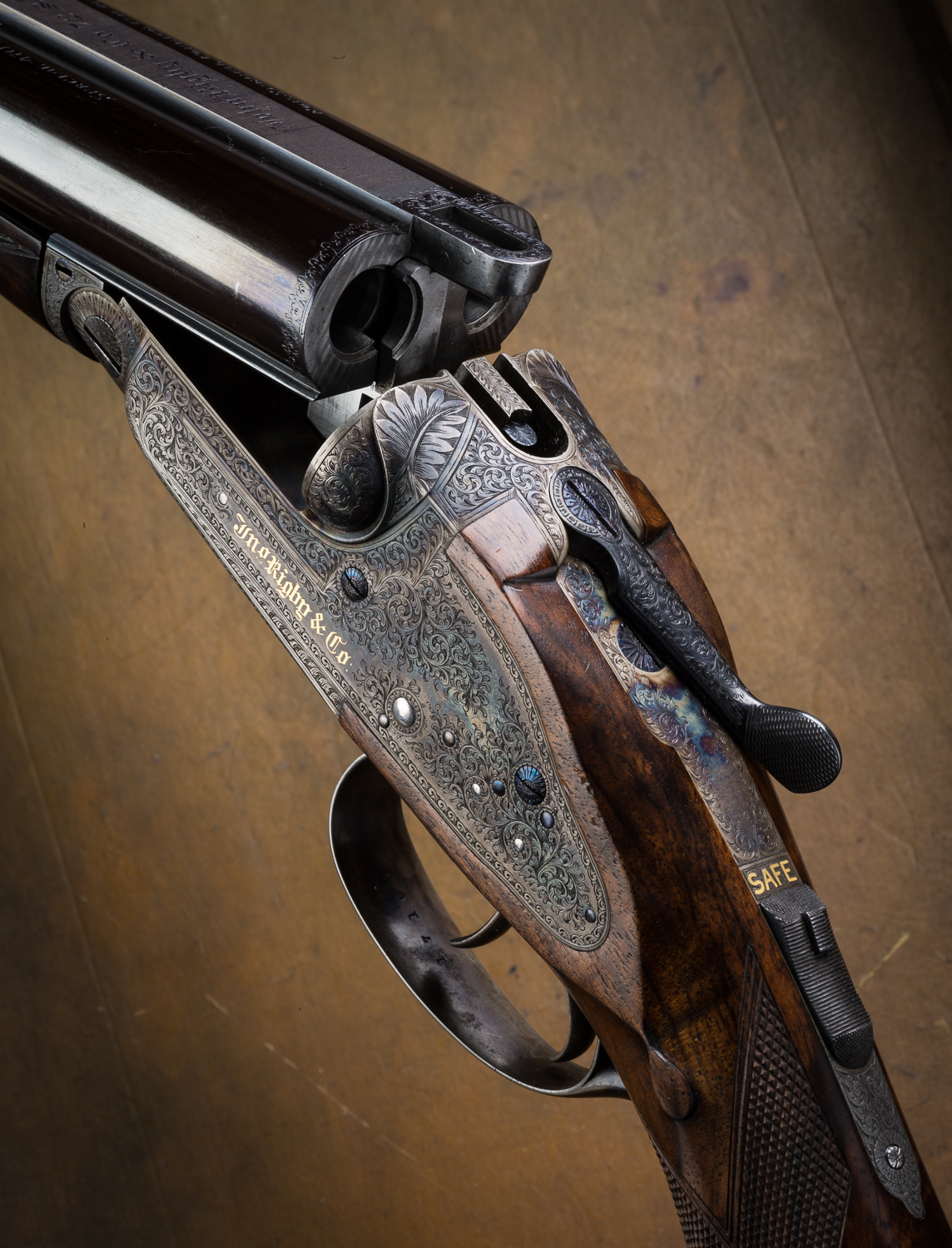 A Rigby Rising Bite side-lock ejector double rifle in .470 Nitro Express. With the rifle open we can see the T. Bissel designed “Rising Bite” in its lowered/unlocked position. It is Bissel’s “Rising Bite” locking lug that provides the top locking support of the action. (Picture courtesy theexplora.com). 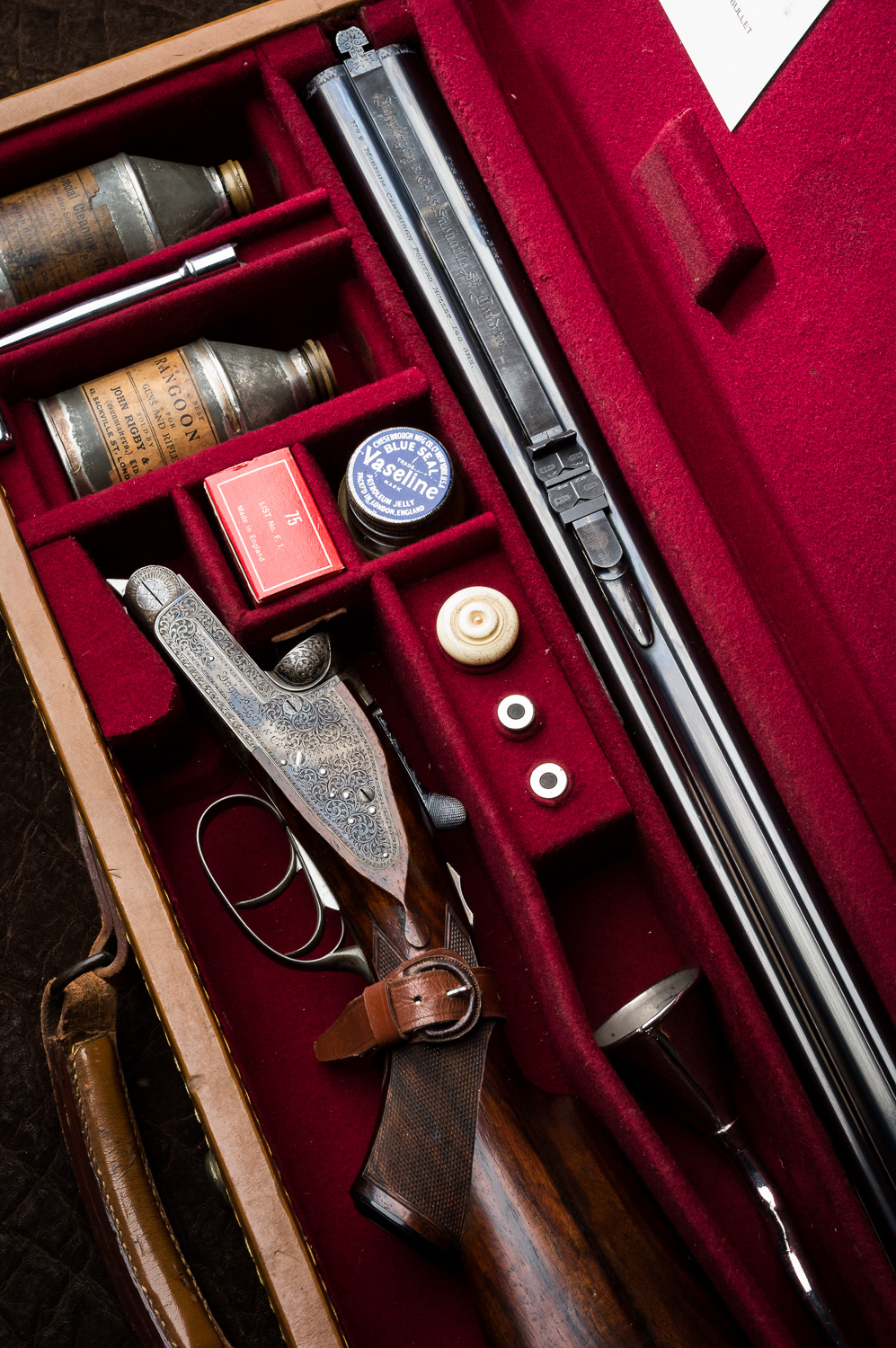 A Rigby “spade head” side-lock ejector double rifle in .272 No. 2 Nitro Express. The “spade head” can be seen at the breech end of the barrels. (Picture courtesy theexplora.com). 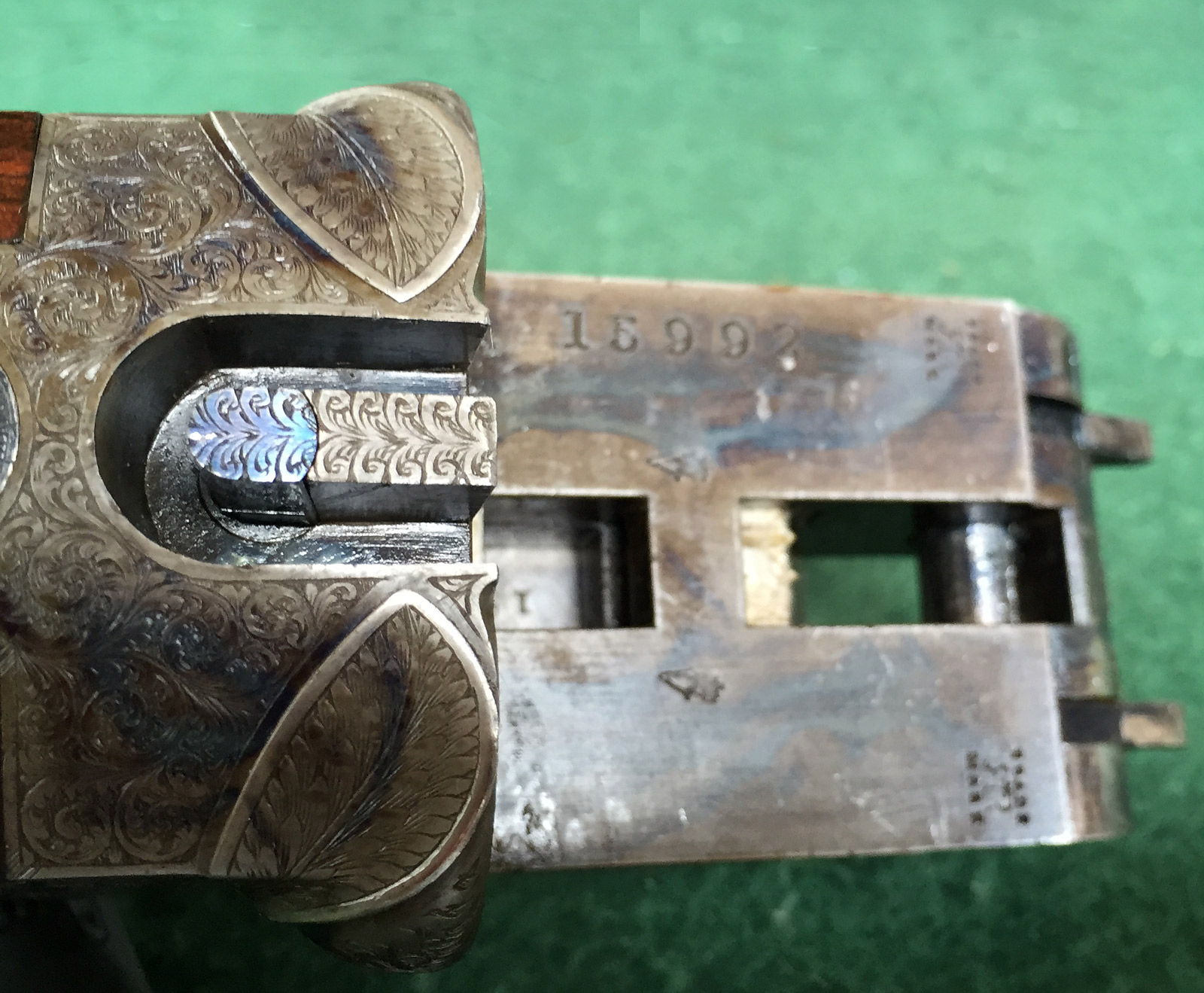 The rising bite bolt up in its locked position. The difference in metal color allows the rising bolt to be easily visible. (Picture courtesy hallowellco.com).

When the top lever of the double rifle is moved to unlock the action the “Rising Bite” (i.e. the rising locking bolt) is drawn downwards to release the top of the action allowing the rifle to be opened.

In this picture we see the action unlocked and we can see that the “Rising Bite” has been withdrawn downwards to unlock the top extension. (Picture courtesy hallowellco.com).

So as we can see the Rising Bite mechanism is more sophisticated than we might at first realize.

The last custom Rigby Rising Bite rifles were delivered in 1932. The two rifles were custom made for the Maharaja of Karuli and were in Teddy Rooseveldt’s favorite caliber, the .405 Winchester, and in .350 Rigby (.350 No. 2 Rigby Nitro Express). In order to begin making Rising Bite rifles again the gunsmiths working with the newly resurrected John Rigby & Co. reverse engineered an original Rigby Rising Bite made in 1904 for His Highness the Maharana of Udaipur in 1902. 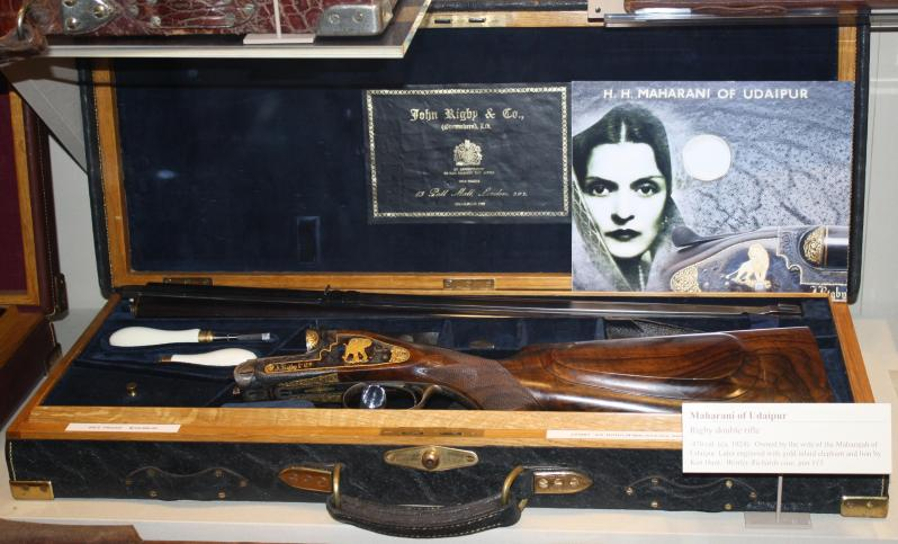 Rigby reverse engineered a 1902 vintage Rigby Rising Bite double rifle so they could begin making rising bite rifles again. That 1902 rifle was made for His Highness Maharana of Udaipur. This picture is of the Rigby Rising Bite rifle made for Her Highness the Maharani of Udaipur which she took delivery of in 1924. It is in .470 Nitro Express and can be seen on display at the NRA’s National Firearms Museum near Washington DC (Picture courtesy “omnivorous bob” nitroexpress.com forums).

Rigby catalog page for their Rising Bite double rifle. To read the text right click on the image and choose “View Image” which will then display it full size. (Picture courtesy Rigby).

You will find information on the Rising Bite rifle and contact details for John Rigby & Co. if you click here.

If you are seriously considering a Rigby Rising Bite rifle you will without doubt want to head over to London and discuss your requirements with the staff at Rigby. You will also want to allow staff to show you their workshops so you can appreciate the craftsmanship that goes into one of these unique bespoke rifles.

The Rigby Rising Bite is an extraordinary example of the gunsmith’s art. (Picture courtesy Rigby).