The formative years of cartridge loading revolver design includes some designs for which documentation is scant. The 1870’s saw Smith & Wesson create their No. 3 top break revolver whilst Colt’s design was a development of their cap and ball conversion to cartridge with a fixed cylinder, ejector rod and loading gate, the Single Action Army of 1873. Across the pond in Britain similar experiments were taking place and the British were quick to put together the double action revolver with a top break action. The Webley-Pryse revolver was the earliest reliable example appearing in 1877, just four short years after the Colt Single Action Army made its debut. The motivation for the British to create revolvers which could be reloaded quickly is understood when we realize the British Army were fighting in Africa and the Zulus were certainly no less fearsome adversaries than the native American Indians.

This sole example of a top break Colt Army and Navy revolver is opened by the latch on the left side of the frame behind the cylinder.

A top break revolver is arguably slightly more convenient to reload than a revolver with a swing out crane because the action of opening the top break revolver normally extracts the spent cases and all that is needed is to flip the revolver over to drop them out. A revolver with a swing out crane requires that the cylinder be swung out and that the ejector rod be depressed to eject the spent cases so it requires one extra action on the part of the shooter – i.e. that the ejector rod be depressed – which is slightly slower. This being said it is not surprising that Colt experimented with the top break revolver design before finally settling on the solid frame with swing out cylinder that became their hallmark double action. 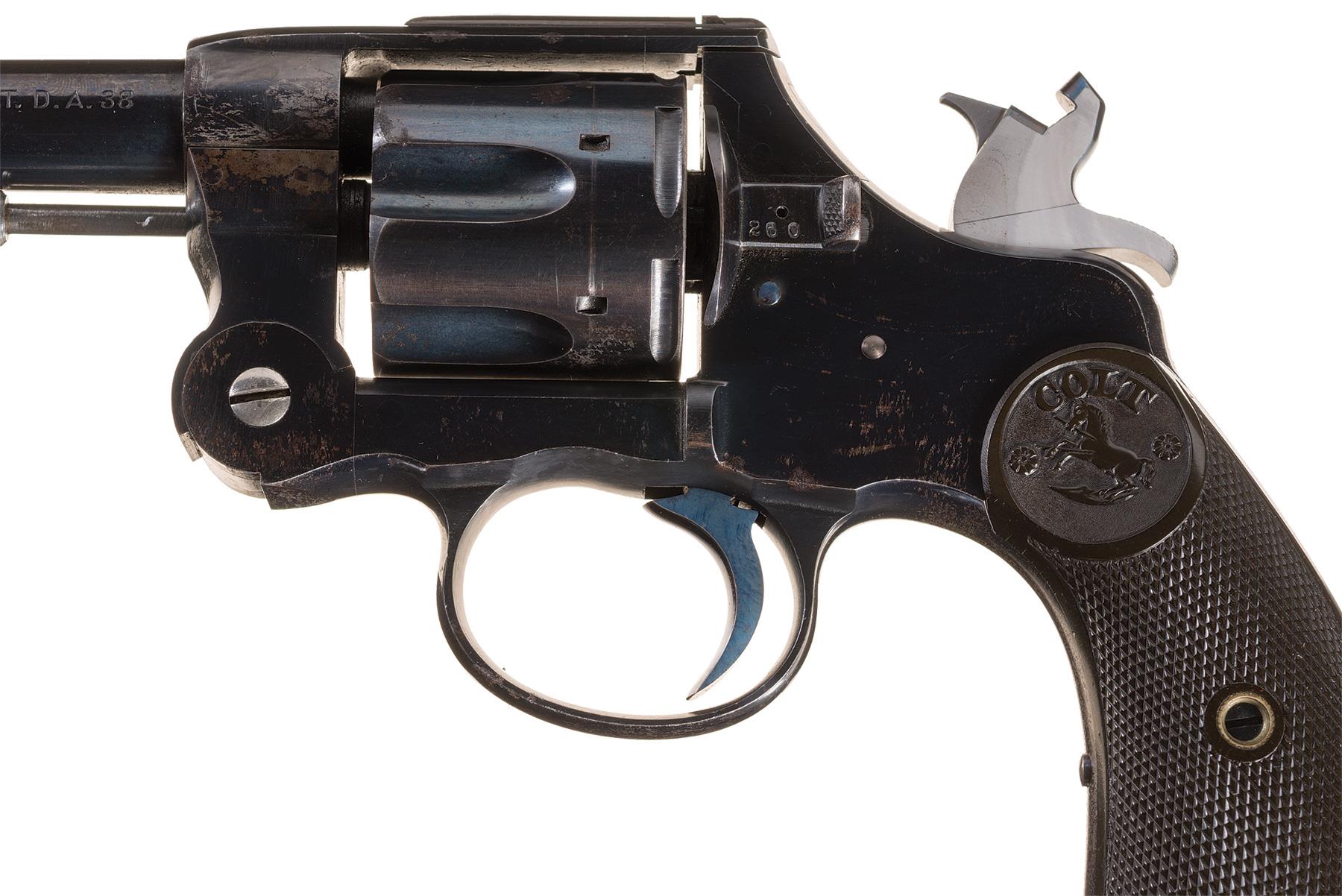 This close up of the action of the Colt top break revolver shows the notched hammer which helps lock the revolver closed.

The sole disadvantage of the top break revolver is that it is not as strong as a comparable solid frame revolver. The top break revolver can also suffer from the same potential problem as a break action rifle or shotgun, i.e. the potential for the firearm to be discharged when it is not fully locked shut. When Colt made their experimental Army and Navy top break double action revolver they were aware of this problem and they used a notched hammer to mitigate against the potential for the revolver to be discharged unless it was fully locked shut, the notch serving to safeguard against the firing pin striking the primer of the cartridge unless the action was fully closed.

Top view of the action showing the hammer in its uncocked position set back out of contact with the cartridge primer as is usual with Colt and Smith & Wesson solid frame revolvers. Note the recess in the top break to allow the hammer to fall completely when the trigger is pulled to fire the weapon.

Colt only made one experimental top break Army and Navy double action revolver and that is the one featured in our pictures that is coming up for sale by Rock Island Auction Company at their Premiere Auction to be held between December 2nd-4th 2016. The revolver is mechanically the same as the solid frame Colt double action revolvers with a swing out cylinder and looks to be an example that was made at the factory to compare the swing out cylinder design with the top break.

This particular revolver is documented in R.L. Wilson’s book “The Book of Colt Firearms” on page 340. The reference on page 340 of R.L. Wilson’s book states under the “Additional Features” heading in the section marked 5. Frames “An experimental specimen, Serial #135444, was made in the top break configuration, similar to certain contemporary Smith & Wesson revolvers.” This is the revolver that is coming up for sale. 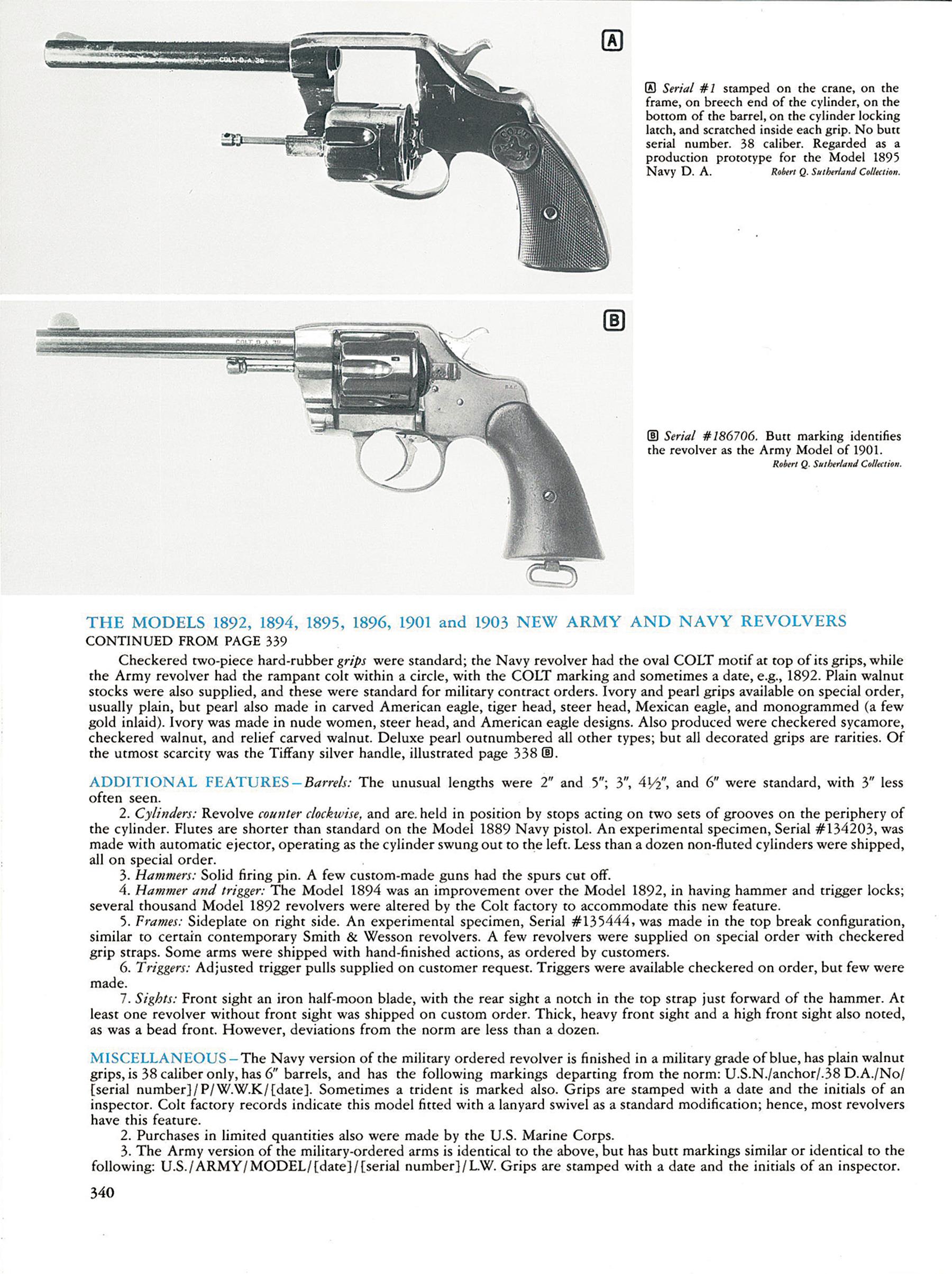 Page 340 of R.L. Wilson’s book with the reference to this revolver under the heading “Additional Features”.

Assuming that this revolver was numbered in sequence with the New Army and Navy revolver serial number range its year of manufacture would have been 1900 and it is almost certain to have been the only example ever made.

You will find the sale page for this revolver with further information if you click here.

You can find R.L. Wilson’s book “The Book of Colt Firearms” on Amazon if you click here.

The condition of this unique revolver is described by Rock Island as follows:-

“Very fine. The revolver retains 75% bright original high polish blue finish with a smooth brown patina on the balance. There are a few dark small spots of mild pitting. The grips are excellent with overall crisp checkering. Mechanically excellent. Quite possibly a one-of-a-kind Colt experimental top break revolver that adds a missing piece to even the most advanced Colt double action revolver collection. No Colt double action revolver collection can be considered truly complete without this revolver.”

There looks to be some scratching on the right side of the frame and rust visible in the photograph supplied by Rock Island Auction. That being said this is a unique and documented revolver.

There appears to be some scratching and rust visible in this photograph of the right side of the revolver.