This Rolls-Royce 40/50hp was owned by Hollywood director Josef von Sternberg who purchased it in 1929. The following year, 1930, von Sternberg welcomed German actress Marlene Dietrich to Hollywood where he would present her with a Rolls-Royce of her own finished in green metalflake paintwork, the flakes of metal in the paint being gold.

Whilst this car was in Josef von Sternberg’s ownership it wore different coachwork, that of a Stratford Convertible Coupé by Brewster. Josef von Sternberg sold the car in 1932 however and a Los Angeles dealer who purchased it decided to have the coachwork refreshed into a slightly different style. So he had the car’s current Piccadilly Roadster bodywork installed to give the car a more unique look. The re-styling caught the eye of another Hollywood figure, that of Oliver H P Garrett, a screenwriter who is most famous for his work in collaboration with Joseph L Mankiewicz to create the screenplay for “Manhattan Melodrama” which was released in 1934. Garrett and Mankiewicz shared an Oscar for Best Screenplay for that movie.

Oliver H.P. Garrett took delivery of this car at Paramount pictures and as it had previously been owned by Josef von Sternberg it was in a sense like a lady coming home, but wearing a different outfit.

The 40/50hp Rolls-Royce Silver Ghost chassis design goes all the way back to the London Motor Show of 1906 and was in regular production up until 1926. The chassis and engine underwent various improvements during production and were even used to create the Rolls-Royce Armored Cars of the First and Second World Wars. The 40/50hp Rolls-Royce Silver Ghost was also the car T.E. Lawrence (a.k.a. Lawrence of Arabia) used in his desert campaigns against the Ottoman Empire during the First World War.

So the Rolls-Royce 40/50hp Silver Ghost was a car that did not just take part in movie dramas, it took part in real life dramas as well. They were built to be “The best car in the world” and they lived up to that reputation.

The “Reuter Red” 1926 Rolls-Royce 40/50hp Silver Ghost Piccadilly Roadster featured in our photographs is a beautiful example of one of these cars from its final year of production and thus in its most refined form.

This car was sold to Rolls-Royce collector Robert Atwell of Kerrville, Texas, in the late sixties and he sent the car to Reuter Coach Works of New York for restoration. It was during that work that the car was painted in its “Reuter Red” color scheme. so this car has a forty year old restoration but still looks fresh as if it had been restored far more recently – the sign of a high quality restoration job.

In more recent times this car passed into the ownership of Belgian collector Andre Plasch who sent the car to Wildae Restorations of Braunton, North Devon for a complete mechanical overhaul. So this car is both beautifully restored in its bodywork and interior but also has been brought up to top operating condition mechanically.

This car is coming up for auction by Bonhams at their December Sale to be held at London, Olympia on 7th December 2016.

This is an opportunity to purchase a classic Rolls-Royce 40/50hp Silver Ghost with unusual coachwork that has been owned by notable Hollywood personalities. 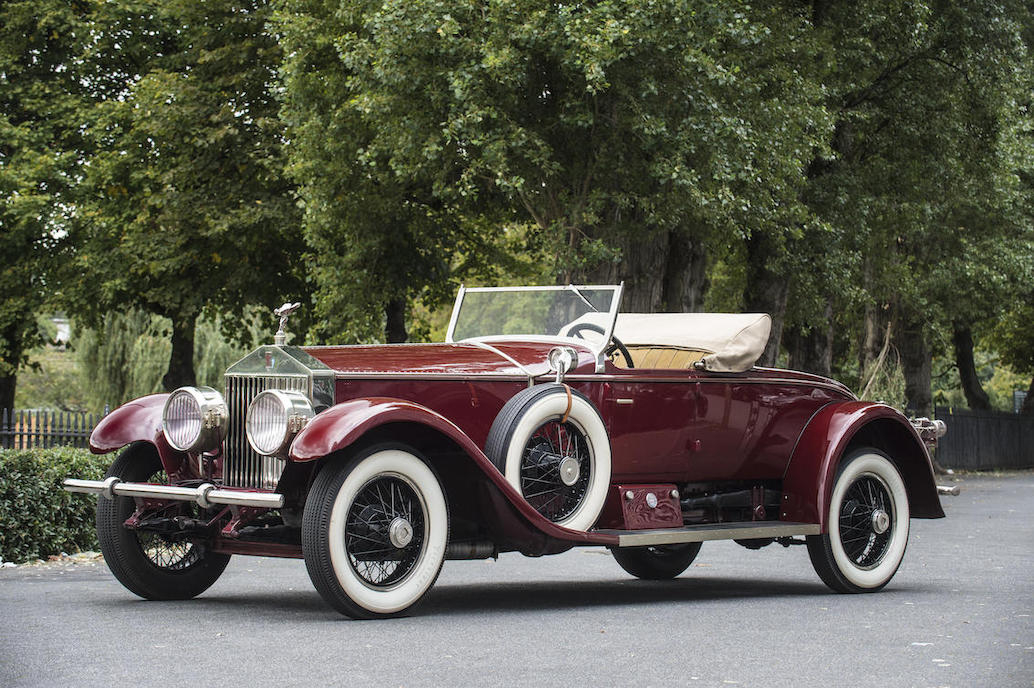