The .308 Winchester has become one of the most popular cartridges in the world for good reason. The cartridge has mild recoil and muzzle blast and so can be chambered in lightweight rifles; and it is a naturally accurate cartridge as evidenced by its adoption by benchrest shooters looking for an edge over the ubiquitous 6mm PPC back in the seventies and eighties. The .308 Winchester was derived from the past popular .300 Savage and was created initially for the military. Design and development work by the US military to create a smaller cartridge to replace the 30-06 began just after the First World War but there was no great impetus to develop a replacement quickly as the 30-06 performed well enough. Thus it was that it was not until after the Second World War and with it the creation of NATO that the need for a cartridge shorter than the 30-06 but still producing similar ballistics became more pressing. 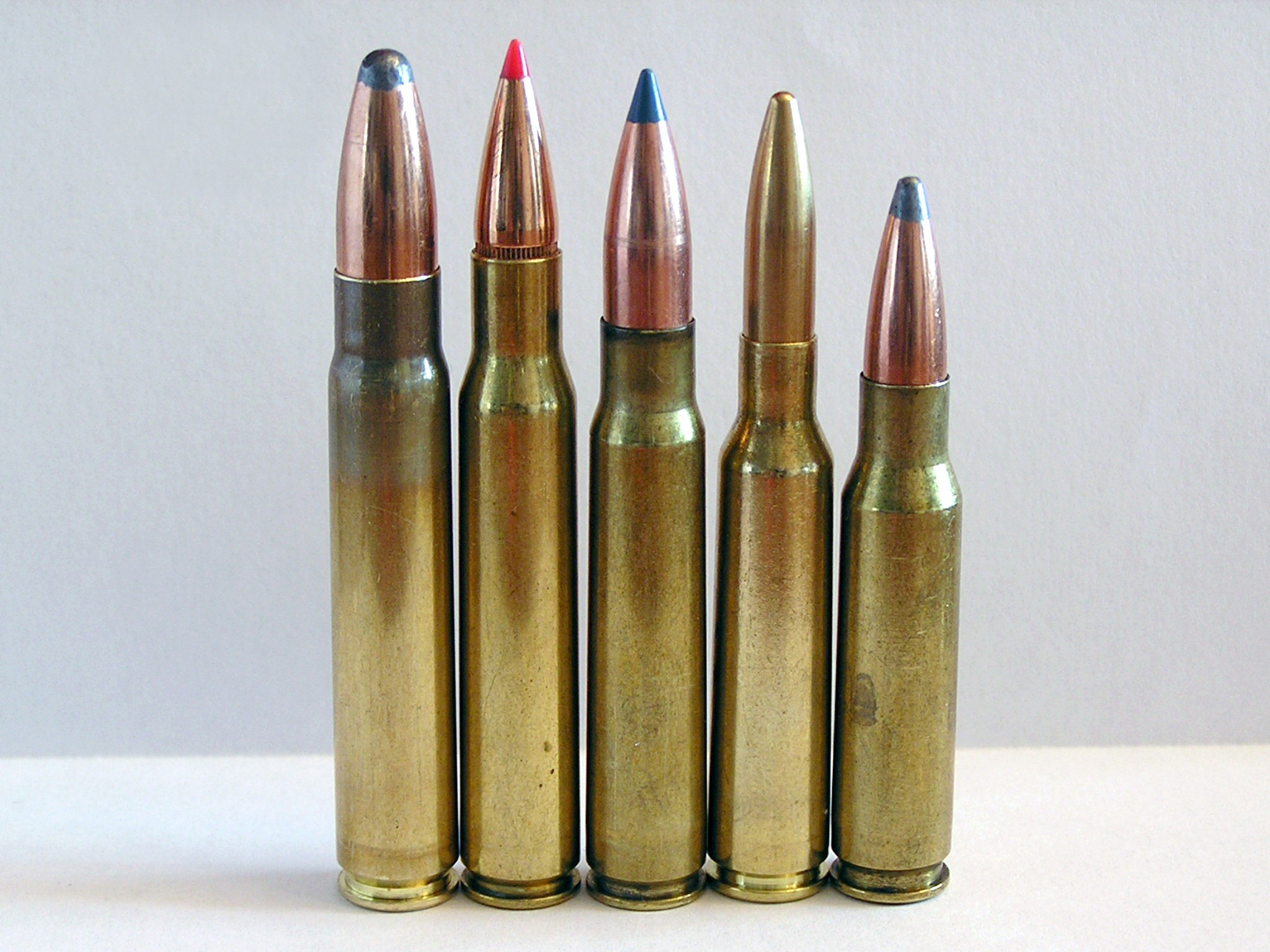 None of the various European nations that became members of NATO used a cartridge as large as the 30-06 Springfield. Britain had been happy with the performance of the .303 British; Germany had been equally happy with the 8×57, and Sweden was using the 6.5×55. There was without doubt the need to create a cartridge that was efficient and of “modern” smaller size for the new generation of infantry weapons. The .308 Winchester was based on the popular and much loved .300 Savage but provided performance that matched the 8×57, almost matched the 30-06 (with military 150grain bullets), and was physically about the same size as the .303 British but more modern looking and with a bit better performance. So it became the most acceptable choice. 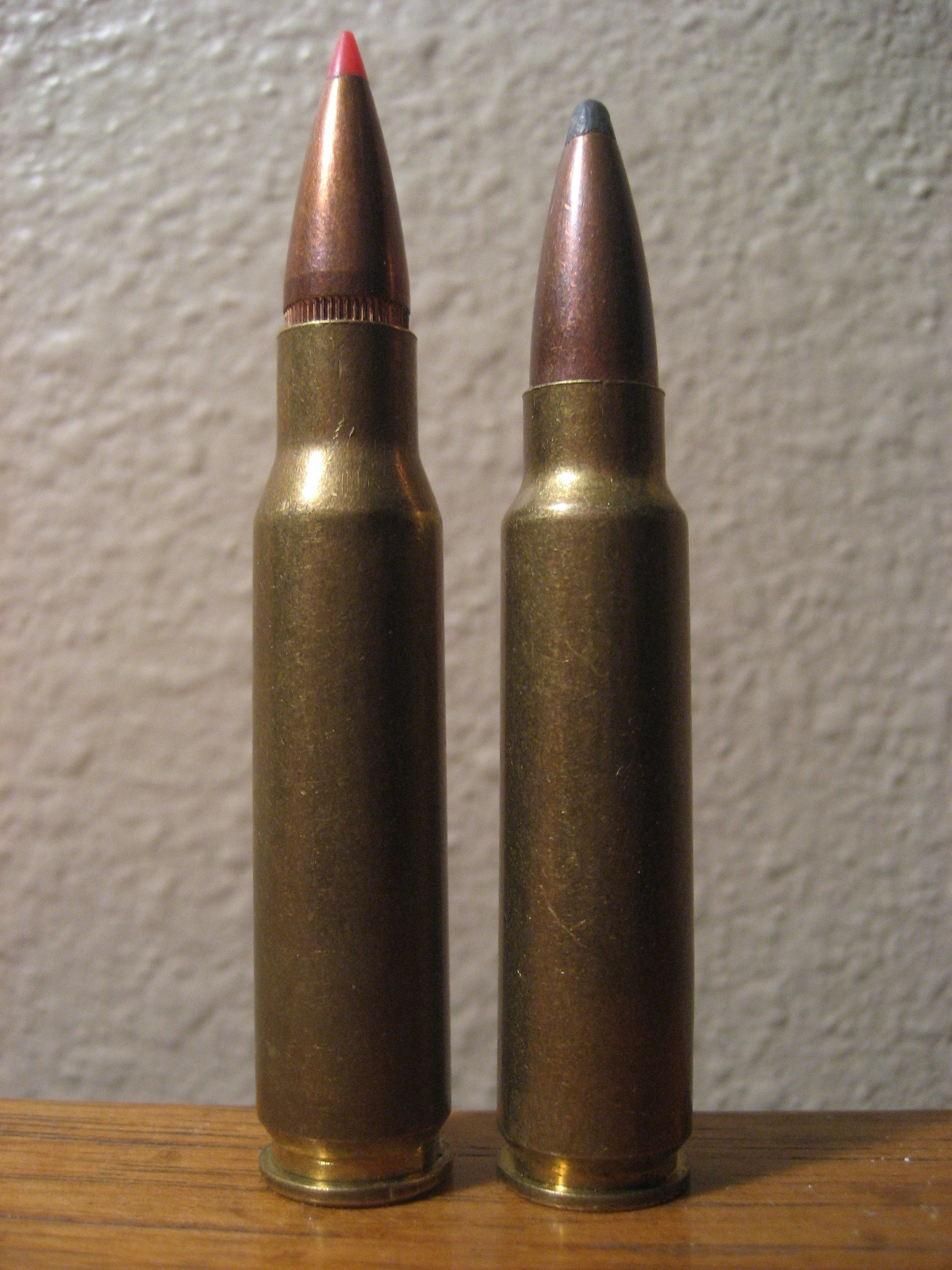 The development work on the .308 Winchester was done in conjunction with Frankford Arsenal began with the prototype “Cartridge, Ball, Cal.30T65”. This prototype was subjected to a lot of experimentation and modifications until the design was finalized as the “T65E3” and this was adopted by NATO on 15th December 1953 and designated the 7.62×51 NATO. The US military began adopting the cartridge in 1957 with the introduction of the M14 rifle and the M60 machine gun. 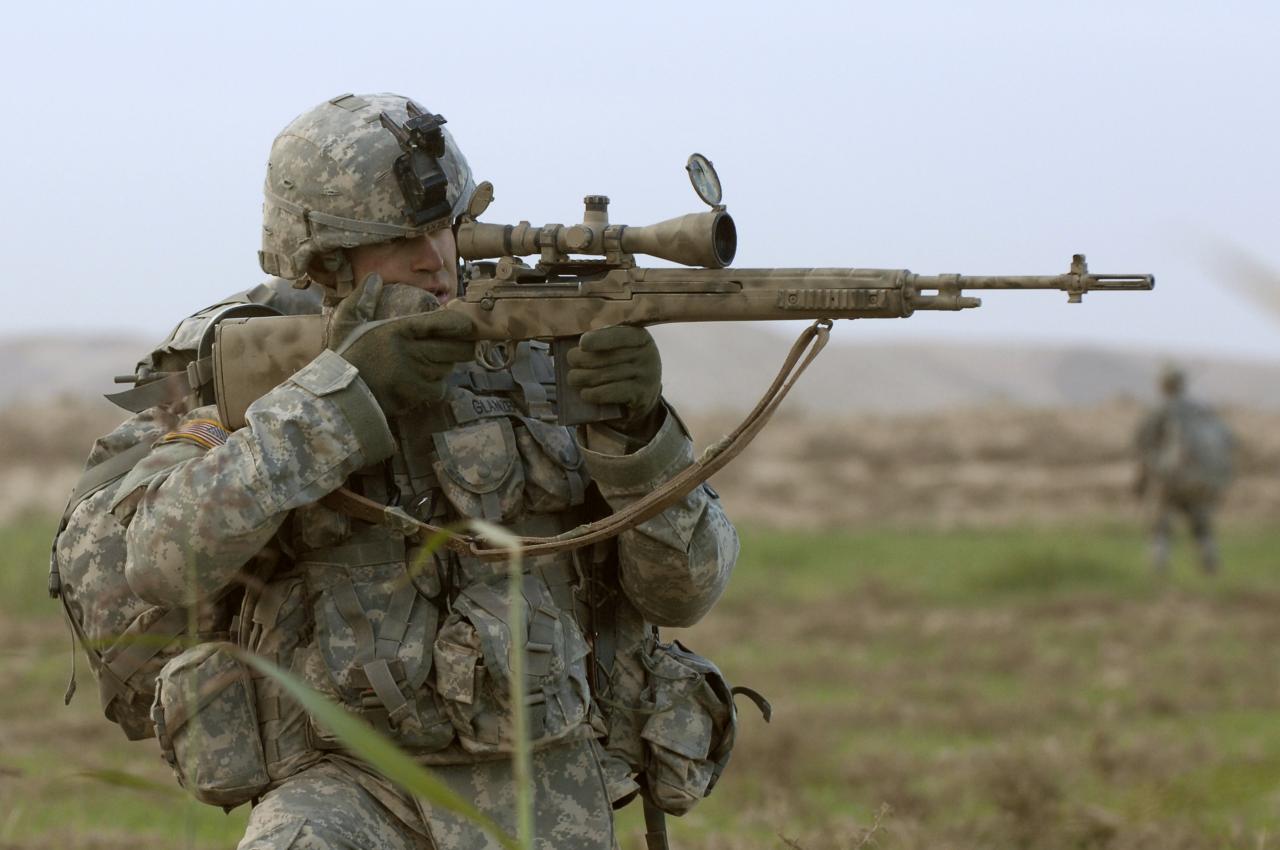 M14 rifle in current use by the USMC as a “Designated Marksman Rifle (DMR)”.

(Note: You will find an interesting article on the M14 rifle’s use by the USMC as a “Designated Marksman Rifle” (DMR) if you click here.)

Although the development work on the .308 Winchester had been primarily driven by the need to create a new smaller military cartridge the design team at Winchester did not just have the military’s requirements in mind. They saw that the .308 Winchester would be a superb hunting cartridge, and a superb target cartridge. So Winchester launched the .308 Winchester as a sporting cartridge into the market place in 1952. As a sporting cartridge the .308 Winchester was slow to gain acceptance in the United States simply because it didn’t really offer a lot more than the .300 Savage that had a large and loyal following, and it didn’t quite make the ballistics of the ubiquitous 30-06 tending to be around 150fps slower. The 30-06 was and still is also superior when bullet weights from 180grains on up are used. The .308 Winchester was and still is at its best with lighter bullets especially in the 150grain up to 165grain range although it can do a respectable job of driving 180grain bullets if desired. One thing the .308 Winchester does extremely well however is to deliver shot after shot accurately and with minimal shooter discomfort. The target shooters embraced the cartridge quite quickly and it was soon being used in benchrest competition, high power, long range, the Full Bore rifle shooting done in Britain and Australia, the 300meter Olympic Free Rifle competition, and Rifle Metallic Silhouette. 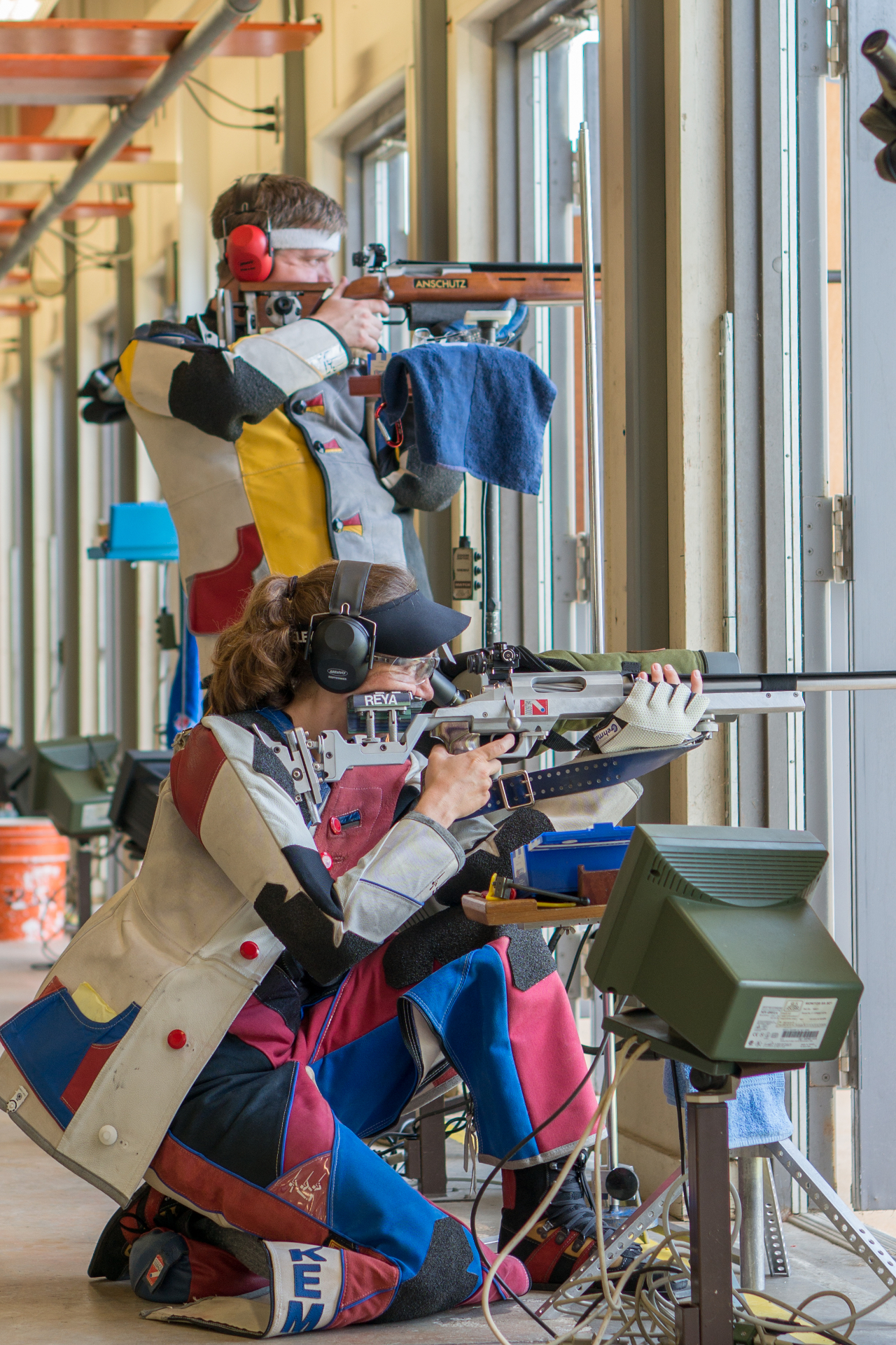 The .308 Winchester progressively began to find acceptance and move into becoming a popular cartridge as people began to appreciate the inherent accuracy and shot to shot repeatability of this short but efficient cartridge. Some had used it in military service in theaters such as the Vietnam War where it was used by both American soldiers and by Australian and New Zealand soldiers using their FN FAL rifles (known to troops simply as the “SLR” (Self Loading Rifle). So as it became popular on the target ranges and many were familiar with it from military service the .308 Winchester progressively began to be purchased as a hunting rifle and also a vermin control rifle.

The .308 Winchester lends itself to short light hunting rifles with modest recoil. This is a Winchester Model 70 Featherweight. (Picture courtesy Winchester).

I purchased a .308 Winchester light sporting rifle back in the very early eighties and used it for hunting and vermin control for a dozen or so years before passing it on. That rifle was a German Heym with double set triggers and it became my “go to” rifle for vermin control shoots where a lot of shots were going to be fired, and for range shooting. I experimented with a range of bullets in it including the 180grain RWS H-Mantles which were excellent but I finally settled on handloads with the 165grain Sierra HPBT Game King bullets coming out of the muzzle at around 2700fps. With that rifle zeroed at 200meters I could confidently take shots out to 250meters and a bit beyond but would pass up a shot estimated to be beyond 300meters (We didn’t have range finders back then).

Nowadays, although there seems to be some controversy about the long range capabilities of the .308 Winchester the caliber is capable of better performance than it used to be if the hunter chooses to use new high performance ammunition such as the Hornady Superformance. This type of ammunition which provides increased velocities and high ballistic coefficient bullets can enable a hunter to stretch the usable range of their .308 Winchester somewhat further than I used to; especially with the use of an accurate range-finder for a shooter who has trained at those longer distances. Despite that being possible my personal choice if the ranges are going to be long and/or the game is going to be large then I’m going to take a heavier caliber rifle such as my .300 Winchester Magnum. The trajectory curve will be flatter, the resistance to wind deflection better, and the humane killing power downrange significantly better. These are of course the same reasons why the military now tend to arm snipers with heavier caliber rifles where feasible. But if you are looking for a lightweight rifle with a short 22″ barrel then a .308 Winchester is likely to be a rifle that will suit you perfectly. Not only that but with the ammunition being significantly cheaper and the rifle being more comfortable to shoot you are likely to shoot it more and become a more certain shot with it than a magnum which you’ll likely shoot less. 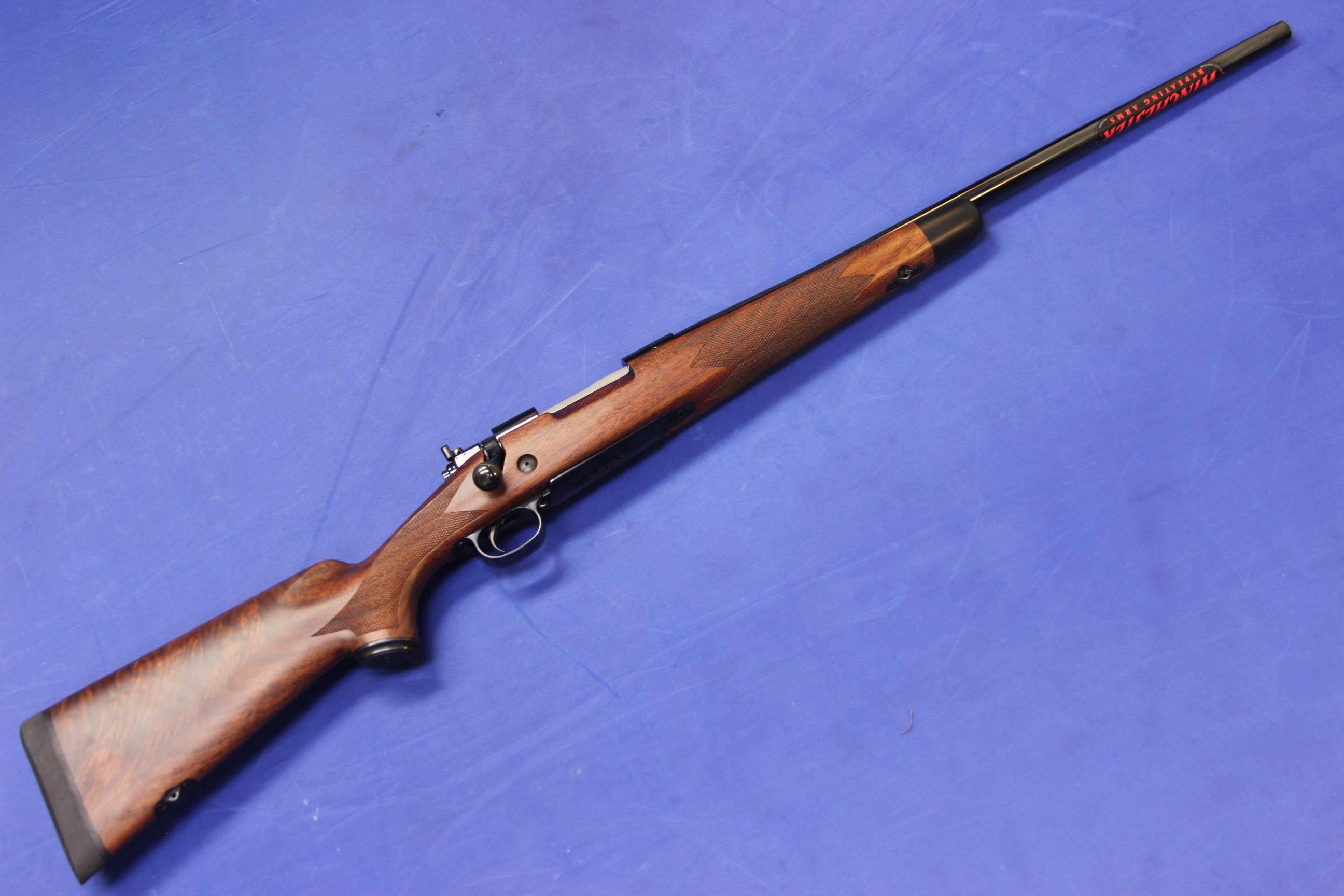 For the vast majority of hunters and shooters the .308 Winchester is near certain to be the best choice caliber for a deer or antelope rifle. The lightweight fast handling rifles typically with 22″ barrels are comfortable to carry, comfortable to shoot, and have all the power needed to provide a humane instant kill on deer and antelope, and on wild pigs. The big advantage with the .308 Winchester is that it tends to be accurate shot after shot, and shooting ten shot groups with one is a gentle experience. So a .308 Winchester is a rifle caliber I tend to recommend to people who ask. It does all the things that most of us want to do and it does those things well. Ammunition is inexpensive, reloading data and components are plentiful, and it is a standard military cartridge as well as being one of the most popular civilian cartridges in the world so we expect it to be around for a long time yet.

My own favorite rifle whether for the .308 Winchester or other caliber is the Winchester Model 70 which comes in models to suit most tastes. With its controlled feed action the Model 70 is a lot of rifle for not a lot of money. You will find them on Winchester’s web site if you click here.

There are many other manufacturers who make good .308 Winchester rifles so you won’t find it difficult to find one to your taste. One of the newest offerings comes from Lithgow in Australia and you can find a review done by a Sporting Shooters Association of Australia reviewer if you click here. I’ve had the opportunity to have a good look at one of these and they are a very well made piece.

(Feature image at the head of this post courtesy 308ar.com).