In the process of colonizing large parts of the world the British created some of the most practical firearms ever made and the break action Webley & Scott revolvers stand tall amongst them. These revolvers are solid and well made, easy to shoot and easy to reload. Its a shame that Britain’s government saw fit to disarm the British people who had fought and sacrificed so much during the First World War. Both Karl Marx and Vladimir Lenin had spoken at Speaker’s Corner in London’s Hyde Park, and the rising specter of terrorism and the related Marxist Communism steered the decision making of the Blackwell and Bodkin Committees and led to the creation of the various Firearms Acts of the 1920’s which served to disarm the ordinary citizens of Britain and Commonwealth countries such as Australia. The end result of that was the progressive death of the once proud British small arms industry and a happy windfall for Americans, secure in their Second Amendment right to keep and bear arms, as many of the British guns that Britons were not allowed to keep were shipped to the United States. Amongst the firearms that made their way across the pond to the New World were large quantities of British revolvers, especially those by Webley & Scott. 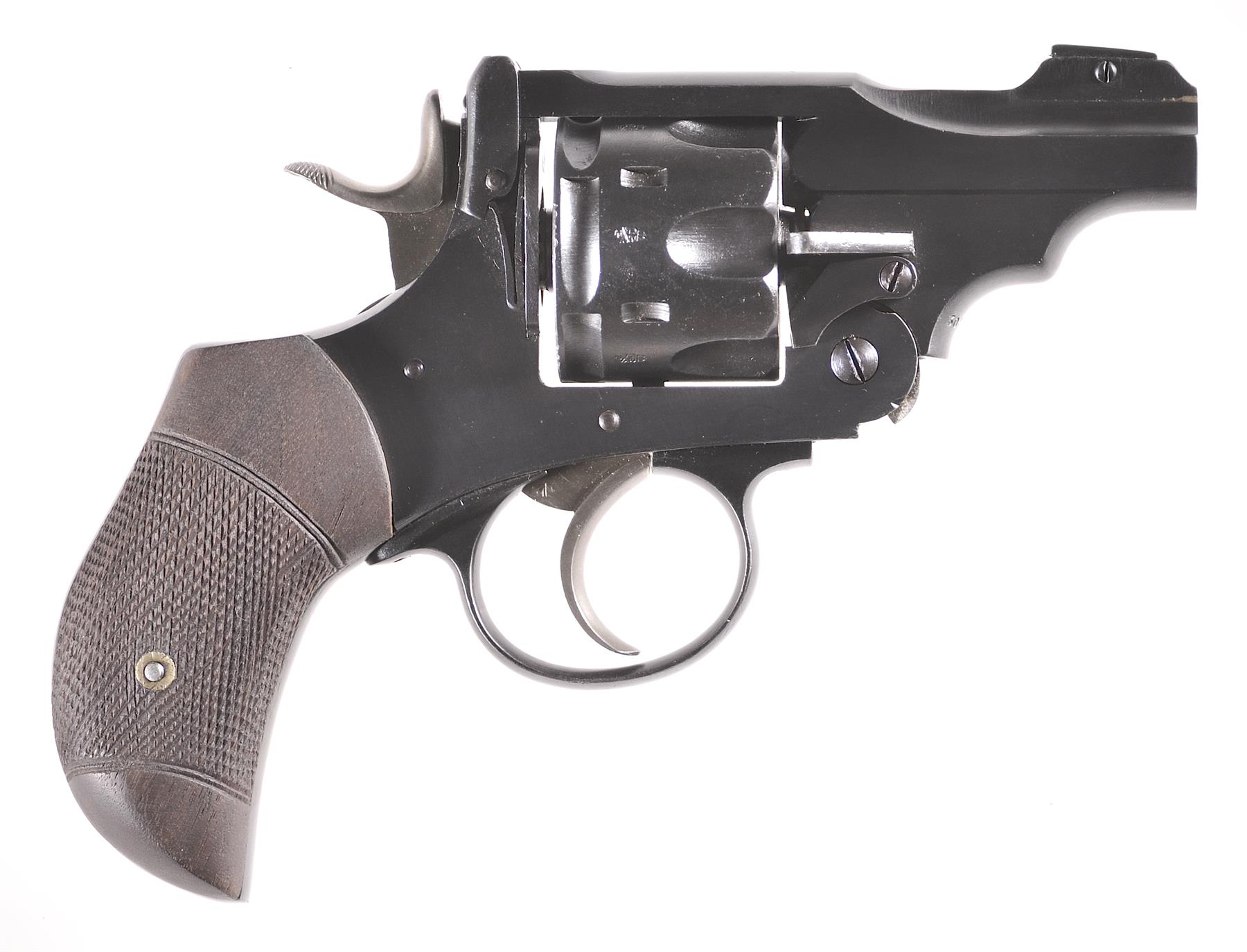 The Webley & Scott revolvers shipped to the United States have almost all had their cylinders shaved to enable them to fire .45ACP ammunition in half moon clips, as can be seen in this picture. Note the large gap between the cylinder and the breech face made to accommodate the half moon clip.

By the time the Webley & Scott break action revolver was retired from regular military service it had served Britain well in various colonial wars and in World War I. The British had already confronted the problem of reloading a revolver quickly and had invented the Prideaux Speedloader which made getting six new cartridges into your “Wobbly Webley” a snap.

With the progressive death of Britain’s small arms industry production of the .455 British cartridges for these Webley & Scott revolvers ceased and the Americans were left with the heart rending problem of a really nice revolver with no ammo to feed it. Yankee ingenuity was brought to bear and a neat solution to the problem was created. American gunsmiths started shaving the rear of the cylinder of the Webley revolvers so they could fire .45ACP ammunition using half moon or full moon clips. The issue with this solution was however that .45ACP ammunition uses jacketed bullets which were not suitable for the forcing cone of the Webley revolvers that were originally designed for lead bullets. That being said the British had been forced to adopt jacketed bullets for the .455 Webley during World War I because the Germans claimed that the soft lead bullets were in violation of the Hague Convention and that any British officer captured with lead bullet ammunition would be summarily shot. 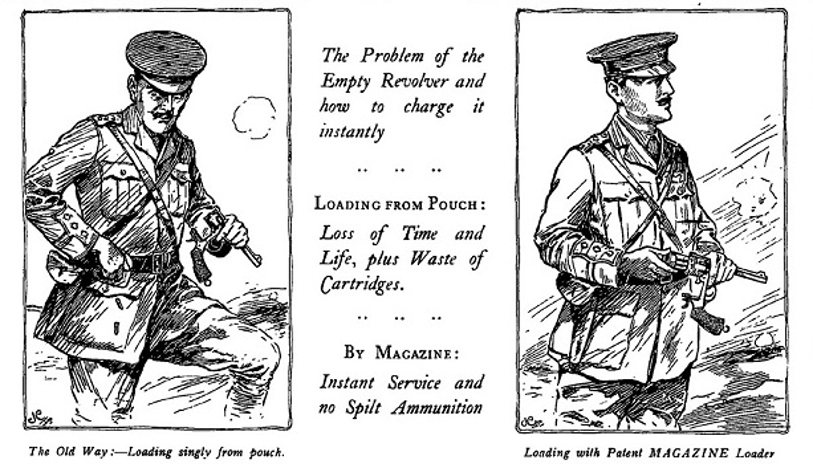 Advertisement for the Prideaux speed-loader of World War I vintage.

The other issue with using factory .45ACP ammunition in the Webley was that the working pressure of the .45ACP is much higher than the working pressure for the .455 Webley. Those who reload can avoid all problems however by sensible reloading. For reloading suggestions for these revolvers click here. 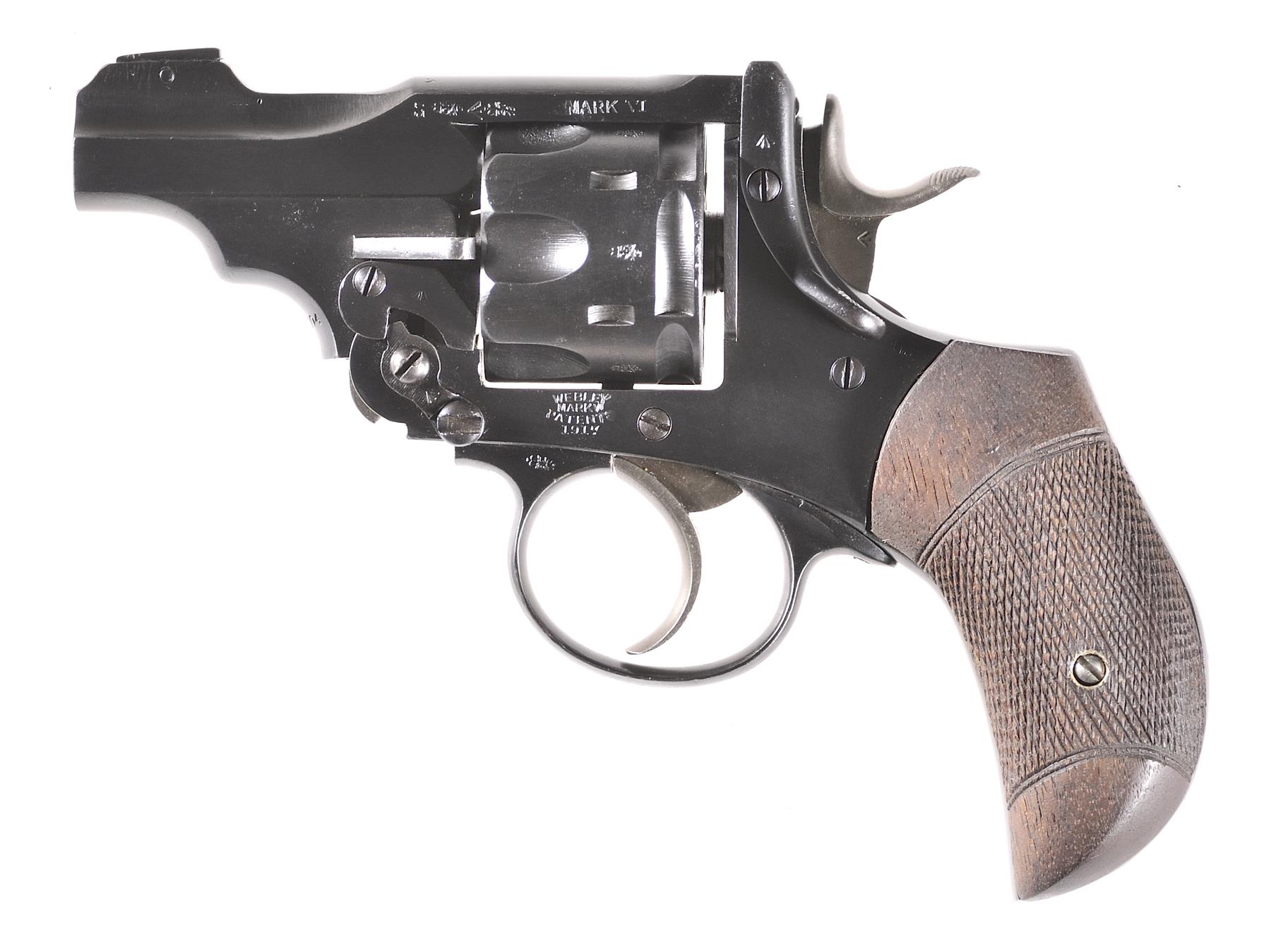 Being of British extraction I have a great deal of affection for the revolvers of Webley & Scott and the snub nosed Mk VI revolver in our pictures immediately caught my eye as being a very unusual and desirable piece. The military issue Mk VI revolvers have a long barrel so this one with its short barrel and bird’s beak grip looks to be quite unique. It should be an excellent shooting collectible and it is coming up for sale by Rock Island Auction on March 23rd, 2017.

Expected sale price is in the range of USD$250-$400 so this is a very affordable revolver.

If I purchased this I’d want to have it professionally stripped, re-furbished, and re-blued. It looks to be in good shape and would be a great gun to shoot and a nice conversation piece.