After World War II the British government were keen to sell off all surplus military equipment to get some hard cash to begin the process of financial recovery. The “big gun ships” of empire were almost all cut up for scrap and the small arms that had been so precious in war time were sold off, but not to British people nor even to returning servicemen. Britain’s own people were not to be trusted with rifles or pistols. Back in 1920 Britain had passed a Firearms Act to ensure, in so far as she could, the disarmament of her people. The Blackwell and later Bodkin committees had viewed the events of the Russian revolutions with fear and there was a real fear that British people might also rise up against the upper classes in revolution. Both Karl Marx, the father of communism, and Vladimir Lenin, the leader of the first successful communist revolution, had spoken freely at Speakers’ Corner in Hyde Park, London. Marx had written his “Communist Manifesto” in the National Library in London that is now the British Museum. It was all too close for comfort for the British government. Thus it was in the wake of World War II the surplus British Lee Enfield rifles and the “Wobbly Webley” revolvers were exported “across the pond” to the United States and sold to surplus dealers. The United States government of the time did not fear her people might rise up in a communist revolution. It was a nation whose existence had been brought into being by a “revolution”, or “War of Independence” depending on which side of the Atlantic you happened to live. The result of all this was unhappiness for the firearms enthusiasts of Britain and happiness for the firearms enthusiasts of the USA.

There was just one little fly in the ointment. The Webley revolvers had been made for a British cartridge, the 455 Webley. Had supplies of this cartridge been abundant and cheap there would have been no problem. But the Firearms Act of 1920 had done great harm to the British gun trade to the extent that 455 Webley ammunition was a scarce and obsolete item. This did not perturb the American surplus dealers however who, no doubt reasonably in their own minds, figured that a .455 Webley was a “45” just like the .45ACP  and the .45 Long Colt. There were American revolvers already in production for the war that used the .45ACP cartridge in half-moon or moon clips. So it seemed perfectly sensible to “shave” the rear of the cylinders of the surplus Webley revolvers so they would also accept .45ACP in half or full moon clips. Somebody tried it out, fed some of the plentiful and cheap surplus .45ACP rounds through their converted revolver and declared it to be a great idea, and soon everybody was doing it. Thus Webley revolvers with shaved cylinders became the most common configuration in the USA and the vast majority of them survived. There is just one teensy weensy little detail that was either missed or ignored. The chamber pressure generated by a .45ACP cartridge exceeds the proof load for a .455 Webley. They are way over the pressure these revolvers were designed for. Actually, there is one more teensy weensy little problem. The Webley revolvers from the Mk I through to the Mk VI were designed for plain lead bullets, not jacketed ones. Now I know the cartridge collectors out there will be saying “but the .455 Webley cartridge was made with a jacketed bullet during World War I”. Yes it was but this was a wartime stop-gap measure. As World War I got under way and British officers got stuck into shooting at their German counterparts with their Wobbly Webleys the Germans complained that this was against the Hague Declaration of 1899 which forbade expanding bullets. Germany declared that any captured officer found using plain lead “expanding” bullets would be summarily shot. So the British quickly put jacketed bullet ammunition into production. Nonetheless the revolvers were not designed for them, but they did stand up to them.

So what do you do if you want to shoot your Webley revolver and it has a shaved cylinder? Is it fine to just feed it factory .45ACP rounds? Though many have done it and survived I would suggest that, no, that is not a good idea. As we said earlier the .45ACP exceeds the proof loads for the Webley revolver. So you need to handload for it and those handloads need to be kept to around the design working pressure for the Webley. Just because a cartridge will chamber does not mean it should be fired. For example, let’s pick another cartridge and a different Webley revolver. Let’s pick the 38ACP (not the 380ACP, but the original cartridge for J.M. Brownings first pistols). The Webley Fosberry revolver was chambered for this round. The 38ACP is the parent of the 38 Super, the cartridges cases are identical semi-rimmed cases. The purpose of the semi-rim co-incidentally was to enable the same ammunition to be used in either an automatic pistol or a revolver. So, if we have our collectible US$5000.00 Webley Fosberry is it going to be OK to feed 38 Super cartridges into it? The pressures of the 38 Super are way above the 38ACP. The end result is going to be expensive little pieces of Webley Fosberry cylinder flying around and embedding themselves in any hapless body that happens to be nearby. End result – demise of US$5000 scarce collectible revolver – hospital bills and related permanent injury.

We understand we need to use reduced pressure handloads in our Webley but what loads? We are faced with a typical dilemma many times when we want to get an old firearm shooting for which we need to make cases and safely “guesstimate” our loading data by extrapolating from a similar cartridge for which loading data and comparative pressure data exist.

For the Webley revolver the working pressure was around 13,200psi. So we want to stay a bit under that. We are working at relatively low pressures especially when compared with working up loads for a “high powered” or “high intensity” rifle. With a rifle working up around 50,000psi we can use typical pressure signs such as flattening of the primers and case head expansion measured with a vernier micrometer (which can accurately read down to 0.0001″ – a tenth of a thousandth of an inch). We can’t use those signs in a revolver. So we look for a similar cartridge; for the .455 Webley we will look at data for the .45 Auto Rim. The .45 Auto Rim has slightly larger case capacity than a .455 Webley so slightly more powder will be needed for any given pressure level. Below is a sample page of usable data taken from a Lyman Manual of 2002.

There is a caution regarding listed pressure levels that we need to be careful of. Pressures in C.U.P. (Copper Units of Pressure) are not exactly equivalent to PSI (Pounds per Square Inch). Some sources, such as the Lyman Reloading Manuals, tell us exactly what units of pressure they are quoting, but some do not. So we need to use more points of reference. In looking for sources of information nowadays we are pretty much spoiled by having this fantastic thing called the Internet – Bless you Tim Berners Lee – we can now search for our loading information for our old obsolete firearms technology using the latest in electronics technology. In doing this it is really important not to just depend on one source. We use the Internet to compare sources and data so we can verify if what we are planning to load is going to be good, bad, or ugly.

Below are two videos from YouTube by Mike Beliveau on loading for the Webley revolver with a shaved cylinder using .45 Auto Rim cases.

As you’ve discovered in watching those we now have a base line load we could duplicate and a lesson on equipment and methods to work out safe loading practice. These sorts of lessons can then be combined with information from a good source such as the Lyman Reloading Manual to enable us to put together safe, accurate loads.

If you are fortunate enough to have a Webley with an original un-shaved cylinder you can use resources such as handloads.com to find your data.

Getting old obsolete firearms shooting again is a challenge but it’s a fun challenge. If you are someone who really enjoys a bit of Sherlock Holmes detective work to find solutions to problems then you will enjoy the research, the workshop time, and the satisfaction of the time at the range when it all comes together and your old rifle or handgun sparks into life once more. 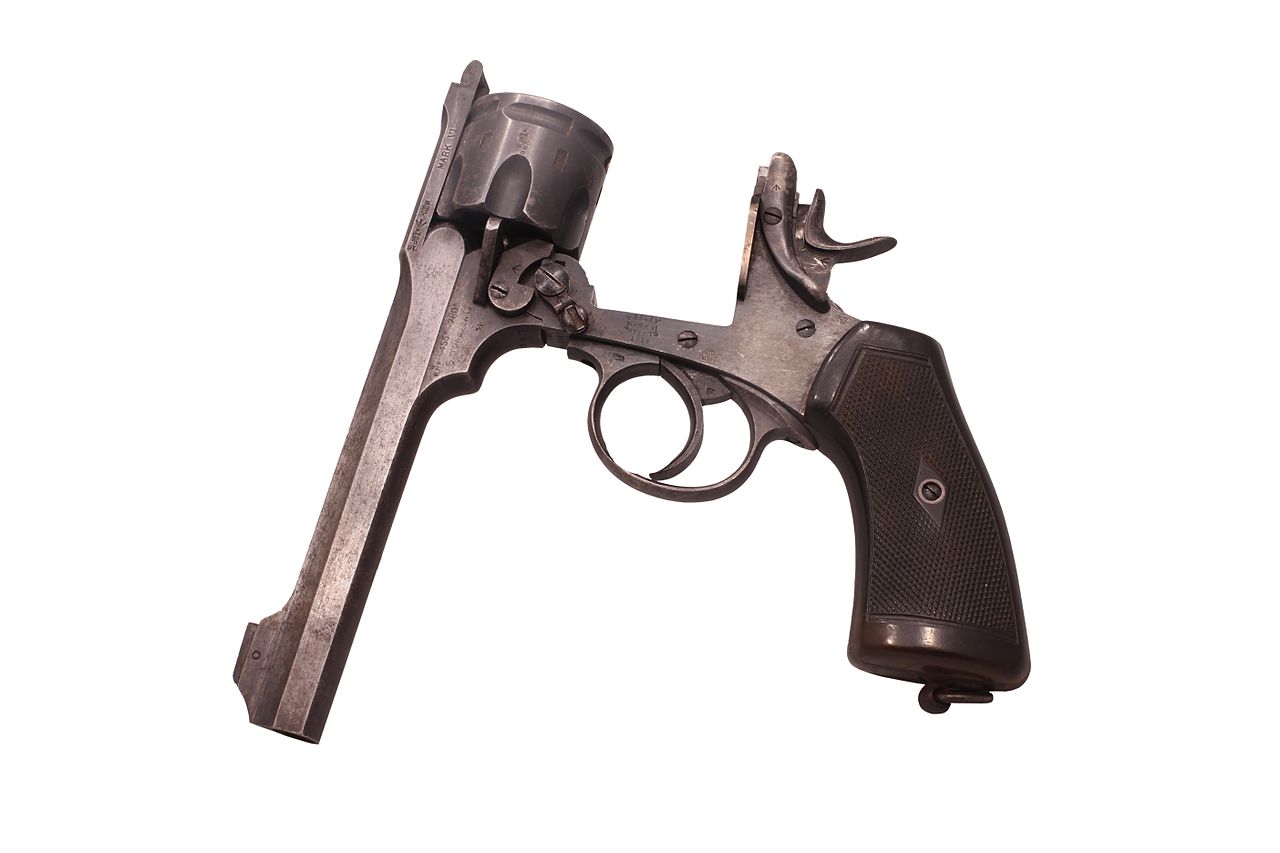 The 38 Super and its Parent the 38ACP