I think the 38 Super is one of the most useful pistol cartridges out there. I say this not just from the perspective of performance and accuracy; and not just from notions of what has more “knock down” power etc. Those things are important, accuracy and reliability being at the top of my priority stack, however there are more considerations than just those. We also need to consider the legal framework we have to operate in, and the purposes we legally own our handguns for. For those who are blessed to live in the United States where your revolutionary founding fathers saw fit to ensure your right to keep and bear arms in perpetuity then you guys and girls are really spoiled for freedom and freedom of choice. And on that subject, if you are not yet a member of the National Rifle Association then can I strongly recommend you rectify that and get yourself a paid up membership. Please, do your part to ensure that your right to keep and bear arms does not vanish from the earth. Personally, I spent over a decade in another country working to protect the right of the people to have firearms. It was not a fun task and it was costly. So please, do what you can to help those who are trying to help you.

Outside of the United States ordinary people are typically only permitted to own handguns for the purpose of target shooting, and in some countries, such as Great Britain, not at all. Britain has never had an organized and well supported “Gun Lobby” thus what British people now have to live with is a direct result of that lack. In some countries, such as Switzerland, all males are required to do military service, and all are required to be armed for the purposes of national defense. But few countries are like that, even the ones like Singapore or South Korea which have compulsory military service.

It is for participation in target shooting sports that most people outside the United States will be allowed to own a pistol. Back in 1971 when I first joined a pistol club and began to acquire some handguns and reloading equipment the only pistol shooting sport available was ISSF (International Shooting Sports Federation). There was, and is, only one center-fire pistol match in ISSF, Center-fire Pistol Match. The maximum allowed caliber for this match is .38. So, even if I’d wanted to own a Colt 45 Automatic I couldn’t. It had to be a .38. The pistol club I was a member of banned all use of jacketed bullets. So, I also had to learn to hand-load and use lead bullets. At that time I was the only club member shooting a centerfire automatic, everybody else used a revolver. Seeing me use this odd pistol (a Colt 1911) and my having to go around picking up my ejected brass after shooting people said I was “not normal” to which I commonly reply “everyone’s normal, until you get to know them”.

Once IPSC (International Practical Shooting Confederation) pistol was introduced things became much easier where I was living. It became legally possible to own a .45 at long last. However, what if you wanted to use the same pistol for ISSF Centerfire Match and for IPSC? You are back to using a 38 and one of your best choices then becomes the .38 Super. It is legal for ISSF Center-fire and it can make Major for IPSC.

The 38 Super is derived from John M. Browning’s 38ACP, the cartridge that was designed for his original Colt Model 1900 pistol and featured in the models of 1902 and the Colt Pocket Hammer of 1903. The 38ACP cases and the 38 Super cases are dimensionally identical. This is good news for owners of vintage 38ACP pistols as cases and bullets are easy to find. The only thing that is needed is reliable load data. For those who don’t reload sometimes it is possible to find recent production loaded ammunition. 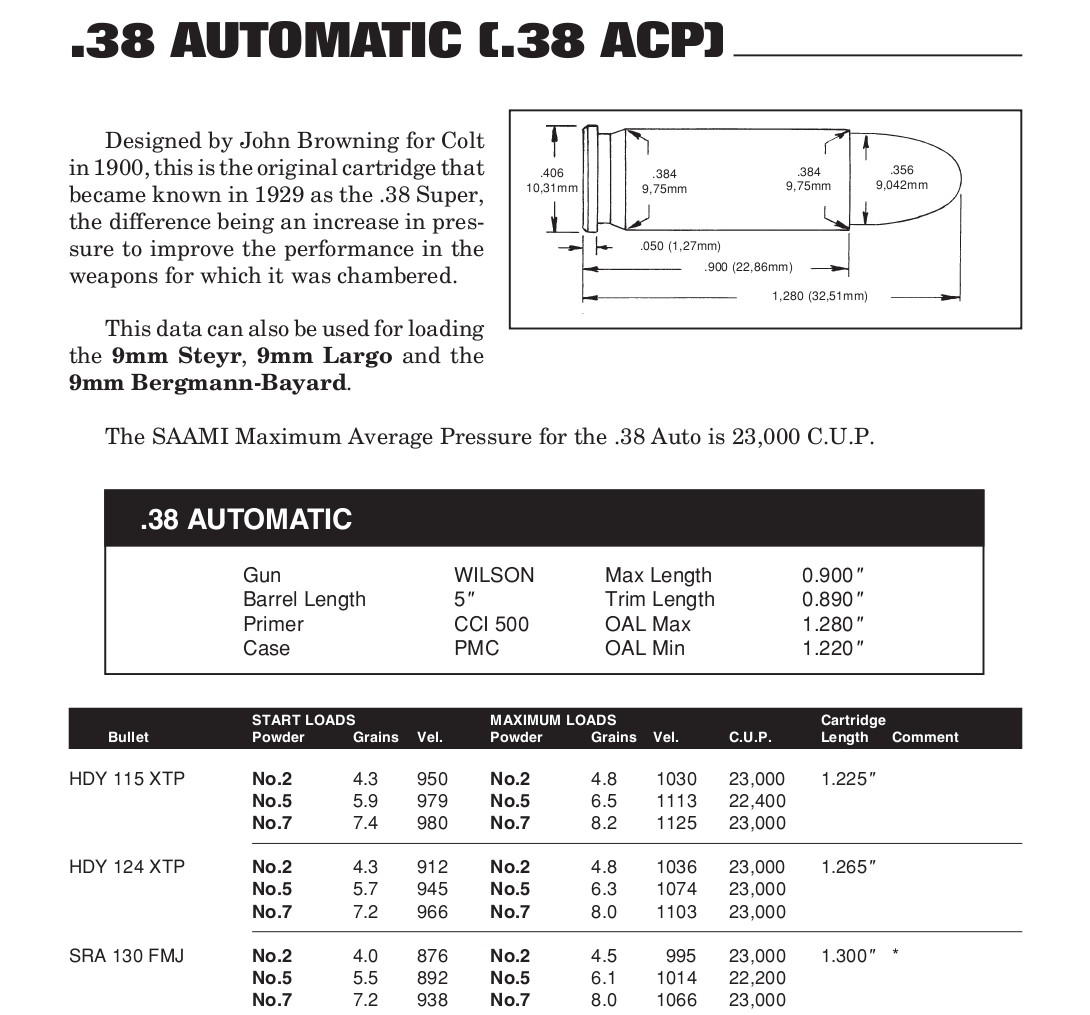 Excerpt from an old Accurate Arms reloading manual which includes data for the 38ACP.

The 38ACP was designed as a semi-rimmed cartridge case that would head-space on the case rim. This worked fine on the earlier Colt pistols but, as the 38 Super was developed for the later 1911 pistols it proved inadequate. So the 38 Super was re-designed to head-space on the case mouth as does the 45ACP and 9mm Parabellum etc. Some have wondered why Browning developed a semi-rimmed case instead of a rimless one for the 38ACP. Only he could answer that, but I wonder if he was not perhaps trying to design a cartridge that would work equally well in both automatic pistols and revolvers. I think he actually succeeded, but the idea never took off. We need to remember that the automatic pistol was a “new fangled” invention around the turn of the 20th Century. The revolver ruled the roost. So, to have a cartridge that would work in both would seem to be a smart bet, especially if you are trying to sell to military and police organizations.

As it turned out there was only one revolver that entered production chambered for the 38ACP, and that was the Webley-Fosberry Automatic Revolver, and it still needed to do a bit of fancy footwork to make it successful. Up until recently I had assumed that in the revolver the 38ACP head-spaced and ejected on the semi-rim, but I have discovered that the Webley-Fosberry revolvers in 38ACP actually used moon clips. You’ll find a good article on this at forgottenweapons.com. 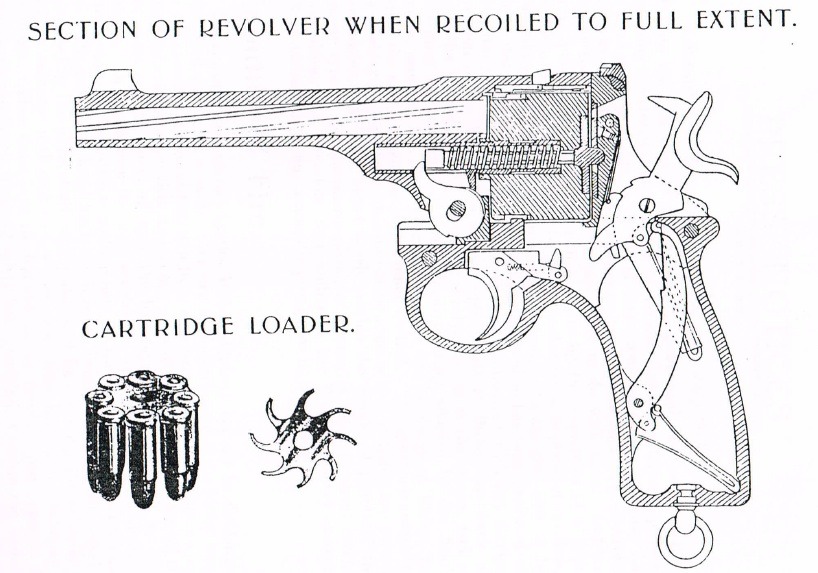 Cutaway drawing of the Webley-Fosberry Automatic Revolver in 38ACP and the moon clip used to load ammunition. (Picture courtesy forgottenweapons.com) 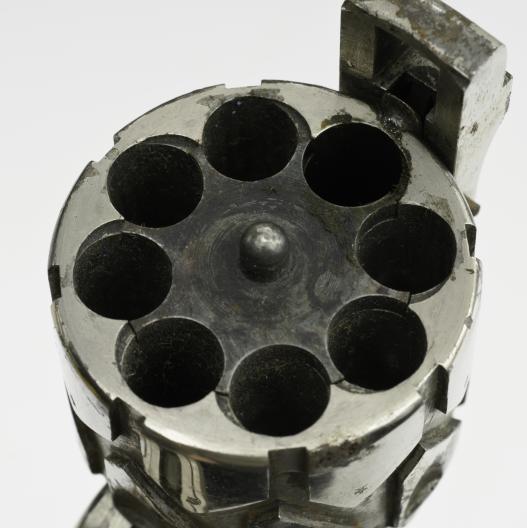 Photo showing the cylinder face in a 38ACP Webley-Fosberry Revolver. One can see here how the shape of the Webley moon clip fits into the revolver cylinder face. (Picture courtesy of forgottenweapons.com)

I think it would be an interesting project to get a Colt 1911 in 38 Super. Wilson Combat make beautiful ones so I’m looking seriously at them; or perhaps Ed Brown might be persuaded to make an Executive Target in 38 Super. But for the revolver match I might just toy with getting a custom 38 Super cylinder made for a 357 Magnum revolver and see if we can’t just use the same 38 Super ammunition for everything. Anyway, assuming I can squirrel away enough shekels before I “shuffle off this mortal coil and go to join the choir invisible” it’s a tempting little project to look forward to. So far as I know, no-one has tried this yet. Please let us know if you have. I think moon clips for 9mm Parabellum should work (if such things exist for a suitable revolver somewhere). Perhaps “it just wouldn’t be worth the powder and shot” to try it, but then again being able to just have one cartridge to load for would have some advantages. Otherwise I might just have to settle for a Colt Python or Smith and Wesson 586 in 357 Magnum and resign myself to loading for two cartridges. Life is full of tough choices! 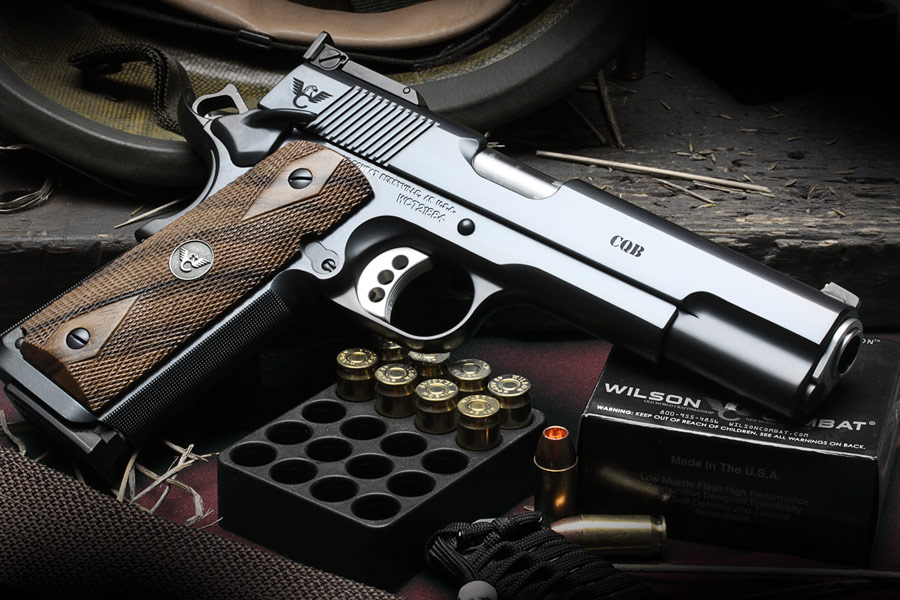 A Wilson Combat CQB 1911 style pistol with target sights. An example of the top quality custom pistols which can be had in 38 Super. (Picture courtesy of wilsoncombat.com).

The 38 Super is, I think, a great cartridge that many Americans miss out on because of the freedom to just go out and buy a stock 45ACP. With the 38 Super you make IPSC Major and do it with two extra shots in the magazine of your 1911 style pistol. It’s a fabulous cartridge to shoot and gives you the portability to go and shoot pistol matches that the 45ACP is not legal for. I’d love to see Colt make their 01980 XSE 1911 pistol in 38 Super, but I understand that, in the US at least, it might not sell well enough. For cast bullets the Lyman #356637 is recommended (mold here) for IPSC. Loading data is to be found in the Lyman Reloading Handbook available in soft cover or, for long term durability, hard cover. And the 38 Super is a cartridge with some interesting history, coming as it does from John Moses Browning’s first automatic pistols and the cartridge he designed for them, the 38ACP. 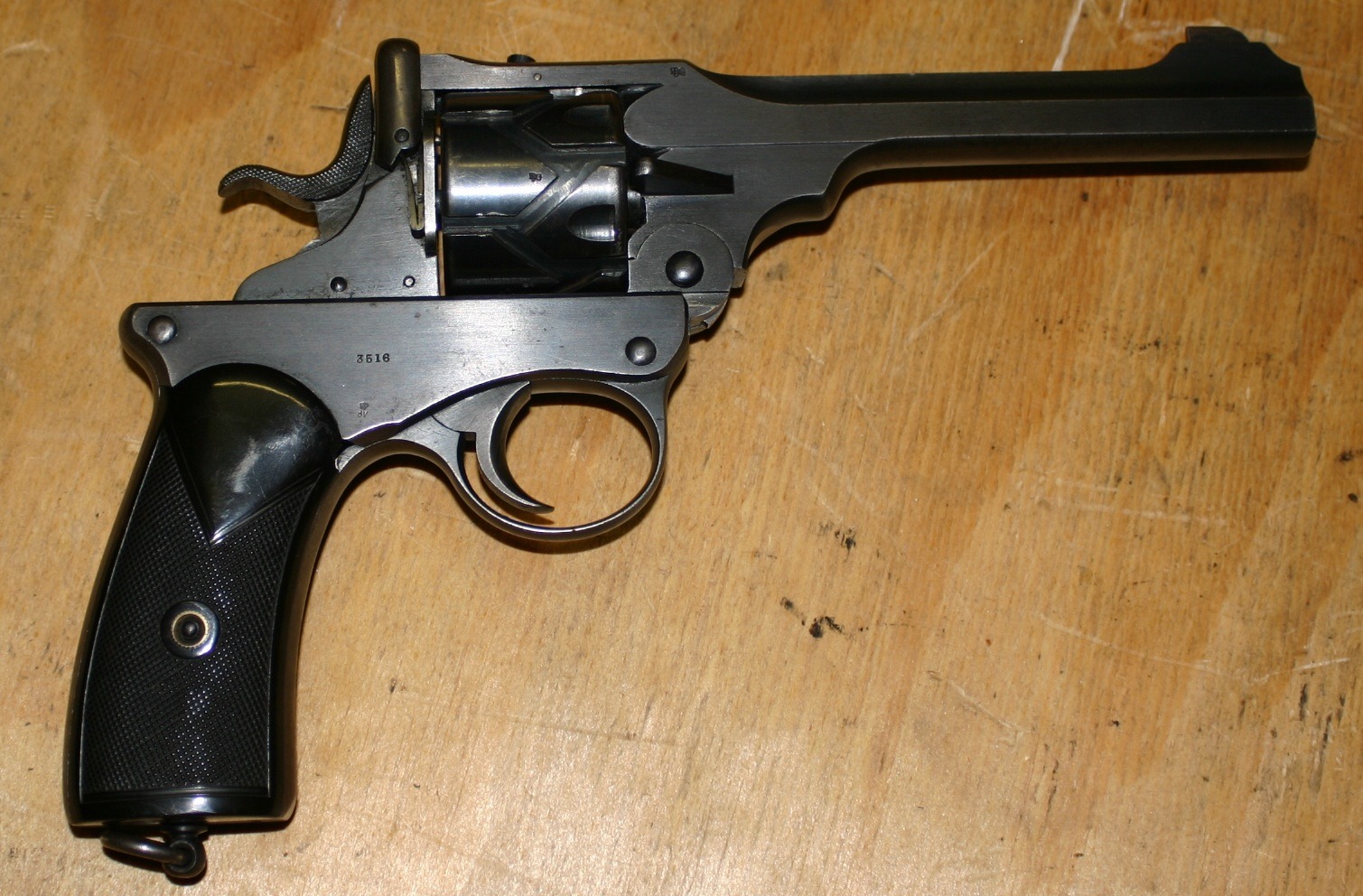 The Webley Fosberry revolver. The only revolver ever chambered for the 38ACP. (Picture courtesy of forgottenweapons.com).