Known as the “Grape Shot Revolver” the Le Mat was a much liked arm of Confederate officers during the American Civil War, being a favorite of Major General J.E.B. Stuart amongst others. There is no wonder that the Le Mat was a popular arm, although quite large it offered no less than nine shots from its revolver barrel, and if that proved insufficient to dispel the emergency a flick of a lever on the hammer allowed the tenth shot to be fired from the shotgun barrel sending a shot pattern in the direction of one’s adversaries in the hope of causing them great discomfiture. In those days of muzzle-loading cap and ball revolvers having that level of fire-power in a handgun was a great advantage. 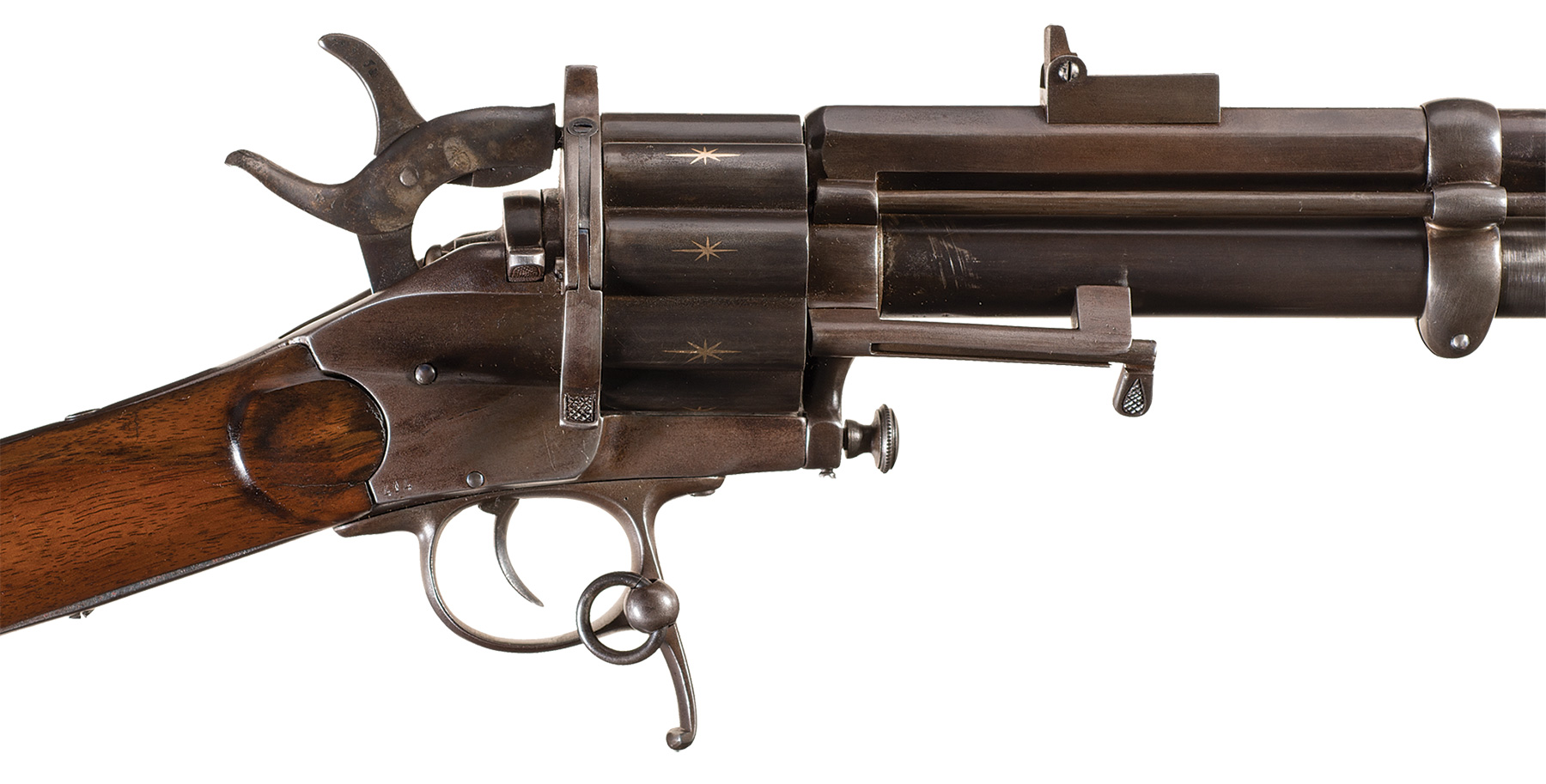 This Le Mat carbine is highly unusual not only for its gold inlay decoration but also because it is a late model centerfire carbine. Note the loading gate visible in this photograph.

The Le Mat revolver was created back in 1856 by Dr. Jean Alexander Le Mat with assistance from United States Army General P. G. T. Beauregard, who later chose to join the Confederate Army when the Civil War began. In 1859 a small production run of less than one hundred Le Mat revolvers were made by John Krider of Philadelphia, Pennsylvania, but it was realized that a large scale manufacturing project would have to be undertaken by an overseas maker. A contract was gained with Charles Frederic Girard & Son of Paris but these second model revolvers exhibited quality control issues and Le Mat wanted to get the British Birmingham Small Arms Company to make his revolvers because of their reputation for manufacturing excellence. This proved not to be possible however and so the Le Mat revolvers continued to be made in France and in the Belgian gunmaking center of Liége, which would later become home to arms maker FN Herstal who would in turn become the manufacturer of many of John Moses Browning’s firearms designs.

Left side view of the Le Mat centerfire carbine’s action. To load the shotgun barrel the hammer is pulled back and the central loading gate opened, the fresh cartridge is then loaded through that opening.

During the Civil War the French and Belgian made Le Mat arms were first shipped to the Birmingham Small Arms factory in Britain where they received British proof marks, and then were transported by gun-runners who tried to thwart the Union naval blockade and get the guns to the Confederacy. About 2,500 revolvers made it. This of itself makes the Le Mat revolver a rare find. Even more rare were the revolving carbines of which few were made and even fewer survive.

After the Civil War Dr. Jean Francois Alexander LeMat decided to return to his native France where he continued to improve and modernize the design of his revolver and carbines. The Le Mat progressed from being a cap and ball muzzle-loading arm to using self contained pinfire cartridges, and then progressed to being made for centerfire cartridges. In order for the design to use centerfire cartridges Le Mat created a loading gate and extractor rod system on the right side of the action for loading/unloading the revolver cylinder chambers, whilst the central shotgun barrel was loaded by pulling the hammer full back and then opening the central breech block which allowed access to load/unload that barrel.

Fascinating though these guns were they did not remain competitive with other designs as firearms entered the centerfire cartridge era. Revolver designs moved to break action designs such as the Smith & Wesson No. 3, and the British Webley & Scott which were much quicker to reload. By comparison the Le Mat was a large revolver, more awkward to carry than a pair of Colt Single Action Army revolvers for example. Revolving carbines similarly did not remain competitive against the lever action rifles that became popular in the United States or the bolt action rifles which offered convenient reloading with much more powerful cartridges. Dr. Le Mat’s firearms remained in production for a while but he was also kept busy in the Franco-Prussian war, and later in the development of the first generation of air-ships.

The Le Mat carbine was not a rifle that was competitive with the Winchester lever actions or other repeating rifles of the 1880’s.

The Le Mat centerfire carbine in our photographs is coming up for sale by Rock Island Auction at their April Premier Auction, and will be offered for sale on April 14th, 2018.

This revolving carbine is described by Rock Island Auction as “Very good with nearly all of the gold inlay, 20% of the period refurbished blue finish, case colors visible on the hammer, mostly brown patina throughout, some patches of minor pitting, and scattered marks and scratches. The lightly sanded and refinished stock is very good and has some small hairline cracks, some gaps at the frame, a chip on the left at the junction with the frame that has been sanded smooth, and slight handling and storage marks. Mechanically fine. All LeMat firearms are scarce and desirable, and this carbine is a particularly attractive example of the rare and lesser encountered LeMat centerfire carbines.”

You will find the sale page for this carbine if you click here.

Left side view of the centerfire Le Mat revolving carbine.

Colonel Le Mat’s revolver and carbine were innovative designs that proved to be excellent in the early days of muzzle-loading arms, but which could not compete with the new centerfire cartridge revolver and rifle designs that appeared in the 1870’s and 1880’s. They are however enormously interesting collector pieces, and this example featuring gold inlay is a quite unique specimen.

If you are interested in Dr. Le Mat’s revolvers and revolving carbines you may be interested in Valmore J. & Serpette Forgett’s book “Lemat The Man, The Gun” which you can find if you click here.

Another good book is Doug Adams “The Confederate LeMat Revolver” which you will find if you click here.