Although I started shooting seriously back in 1971 and am a keen shooter today, there was a two decade long hiatus in my opportunities to shoot and to go hunting caused by a need to go and work overseas on contract in a country that was just not a place you could own a rifle, or engage in hunting: that coincidentally despite the fact that the area where I was living boasted a healthy population of temptingly shoot-able wild boar. So when I moved to a country where I could get back into shooting again and bought a couple or three loading manuals I discovered that a lot of new cartridges had been invented, some of them perhaps useful, but King Solomon in the Book of Ecclesiastes reminds us that “There is nothing new under the sun”. A great many of those new cartridges will be around for a while, but many, if not most, will progressively fade away. Of those that fade away some will deserve to be forgotten, and some will not. 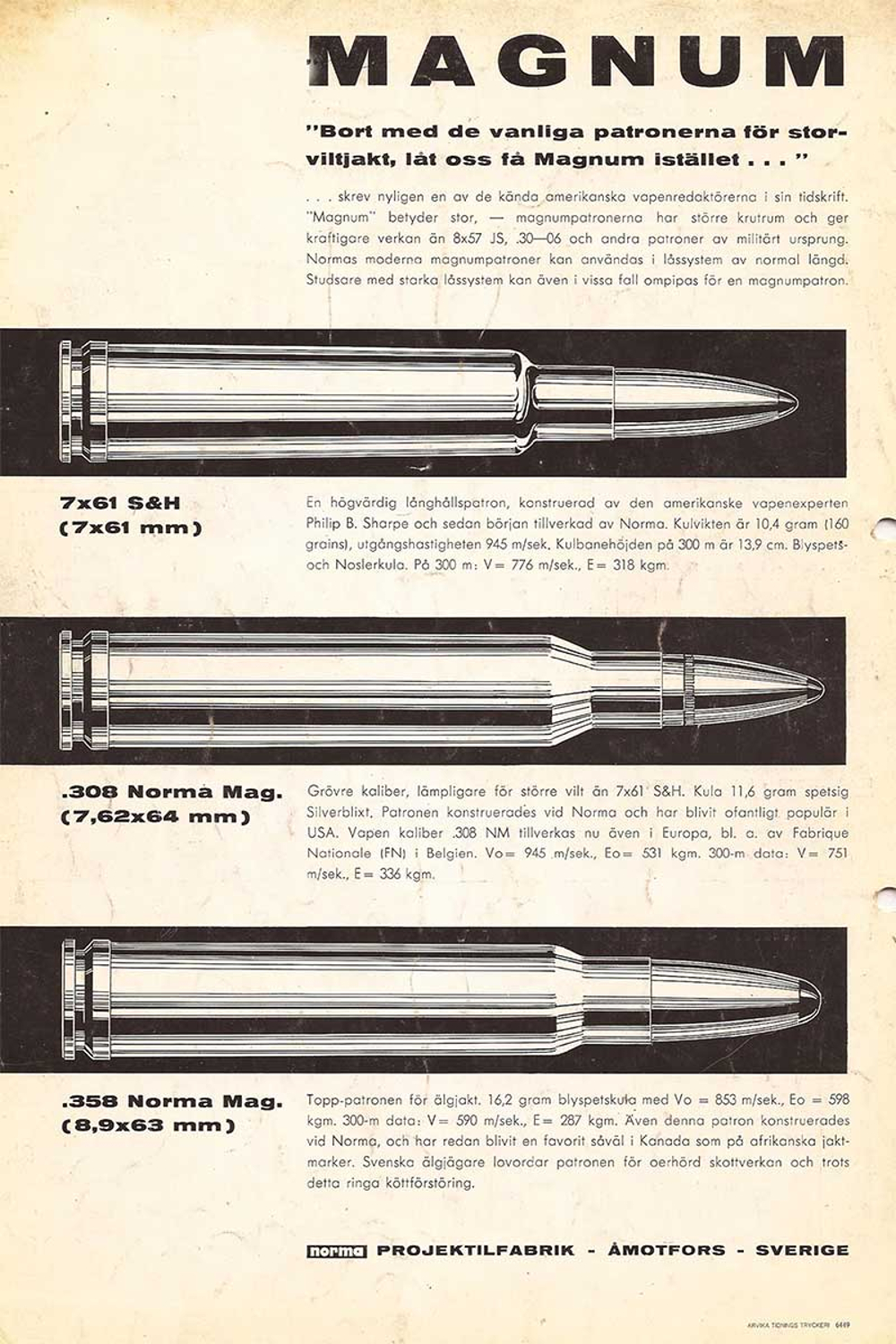 The process of new cartridges being created and then either succeeding, or fading into obscurity has been going on pretty much since cartridges were invented. American Charles Newton was one of the most famous of the early creators of hunting rifle cartridges and two of his best known, and respected cartridges were the .30 and .35 Newton. Although Newton’s designs were quite brilliant they failed to become popular enough to survive but he had hit upon the formula for two of the most ideal cartridge designs for not only North American hunters, but for hunters across the world.

History of the .358 Norma Magnum

In the 1950’s Swedish ammunition manufacturer Norma wisely decided to target the US market and in order to obtain the hoped for success in America they created two cartridges that would duplicate the performance of the .30 and .35 Newton, but using the .375 and .300 Holland & Holland belted magnum cartridge case as the basis. A great many of the wildcatters had been using these Holland & Holland cases for two practical reasons; the first being that they offered greater diameter, and therefore greater powder capacity, than the popular 30-06, and secondly because they featured a belt, which made headspacing, and therefore fire-forming, a simple operation. American company Winchester used this belted Holland & Holland case as the base for their .458 Winchester Magnum in 1956, the .338 Winchester Magnum in 1958, and the flat shooting .264 Winchester Magnum in 1959. Over in Sweden Norma’s engineers decided that they could get into the market with designs that duplicated the .30 and .35 Newton before Winchester or Remington beat them to it: and so in 1959 they did just that. 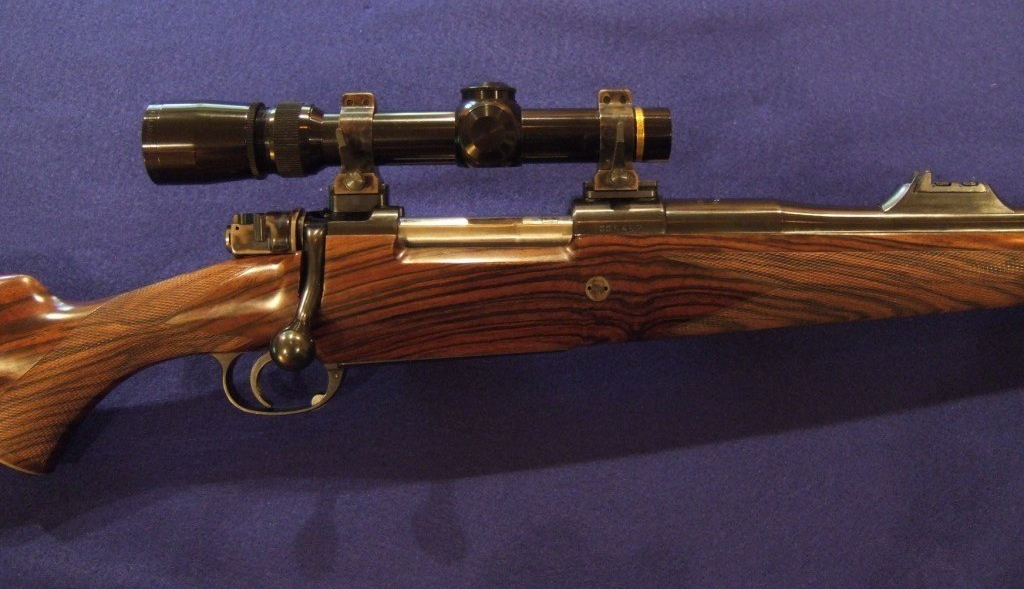 Norma’s new cartridges, designed by Nils Kvale, the .308 Norma Magnum, and the .358 Norma Magnum were, and still are, superb, and if success had depended on excellence in design and performance then they would have both become quickly popular, and would no doubt still be popular today. Perhaps that is what Norma were thinking when they introduced them. However, despite the fact that Winchester had very likely been planning on introducing near identical cartridges to complete their line of belted magnum cartridges and that Norma had beaten them to the punch, Norma had a few more hurdles to successfully jump over in order to achieve success.

Thus it was that when the .358 Norma Magnum was launched onto the US market, and onto the world market, there was no rifle manufacturer producing rifles in that caliber. Not only that but Norma themselves did not offer loaded ammunition for the caliber either, only unprimed brass cases. Those wanting to have a rifle in .358 Norma Magnum needed to either have a suitable rifle they already owned re-barreled, or a complete new custom rifle made. These were hurdles that pretty much ensured that the cartridge was going to have an uphill battle gaining acceptance.

Winchester bided their time, and allowed Norma’s new cartridges to either sink or swim on their own merits. By 1960 the .358 Norma Magnum was actually doing surprisingly well, sufficiently well that Danish riflemaker Schultz & Larsen began chambering their Model 65 bolt action for it, and Swedish rifle maker Husqvarna their Models 1600 and 1650. Nils Kvale had designed the cartridge to provide near .375 Holland & Holland performance in a cartridge that would comfortably fit in a standard length bolt action: and its performance was exactly what a lot of hunters were looking for, not only in the US and Canada, but also in Australia, where the .358 Norma Magnum was an ideal cartridge for the large and tough Sambar deer found in the south east, and in New Zealand, especially for Wapiti (Elk).

The Schultz & Larsen Model 65 rifle was however a bit of a hard sell for Americans. The rifle’s quality was second to none, but they were a tad expensive, and they featured a rear locking four lug bolt action with a short 45 degree bolt lift. This rifle was very nice to use, and the short bolt lift made it crisp and quick to cycle: but selling a rear locking bolt action to people who are handloaders was a bit of a difficult thing to do, especially one with a short 45 degree bolt lift with the inherent lack of camming power to extract a tight case. That being said, if you have the chance to own one of these rifles you will be acquiring a beautifully made rifle that is a delight to use. 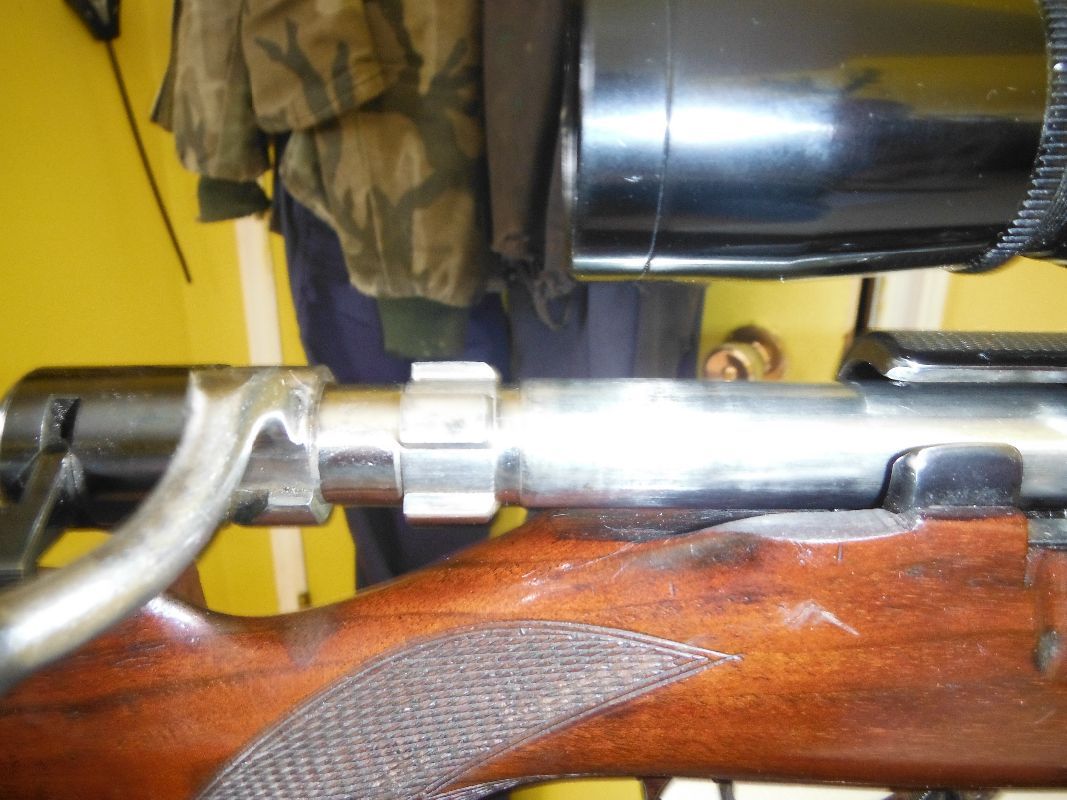 Building or Converting a Rifle for the .358 Norma Magnum

The .358 Norma Magnum sits between the .338 Winchester Magnum and the .375 Holland & Holland Magnum. It delivers performance on a par with the .375 H&H and it does that in a standard length action, which is one of its strongest attributes. If a shooter has a rifle with a standard length action and the correct belted magnum sized bolt face, then switching it over to .358 Norma Magnum should be pretty much as simple as re-barreling the rifle. So, for example, if you have an old Winchester Model 70 in .264 Winchester Magnum or something similar you could pretty much re-barrel it to get your .358 Norma Magnum. The things to beware of in doing this are that the .358 Norma Magnum is a tad fatter than a typical .338″ or smaller so the gunsmith will need to check feeding reliability in doing the conversion. Additionally, because the recoil generated by the .358 Norma Magnum is on a par with that of the .375 H&H Magnum consideration may need to be given to stock reinforcement and/or bedding. A stock that is classic and quite straight will tend to tame the recoil best The weight of the completed rifle should be similar to that preferred for a .375H&H, i.e. around 9lb plus or minus a little. 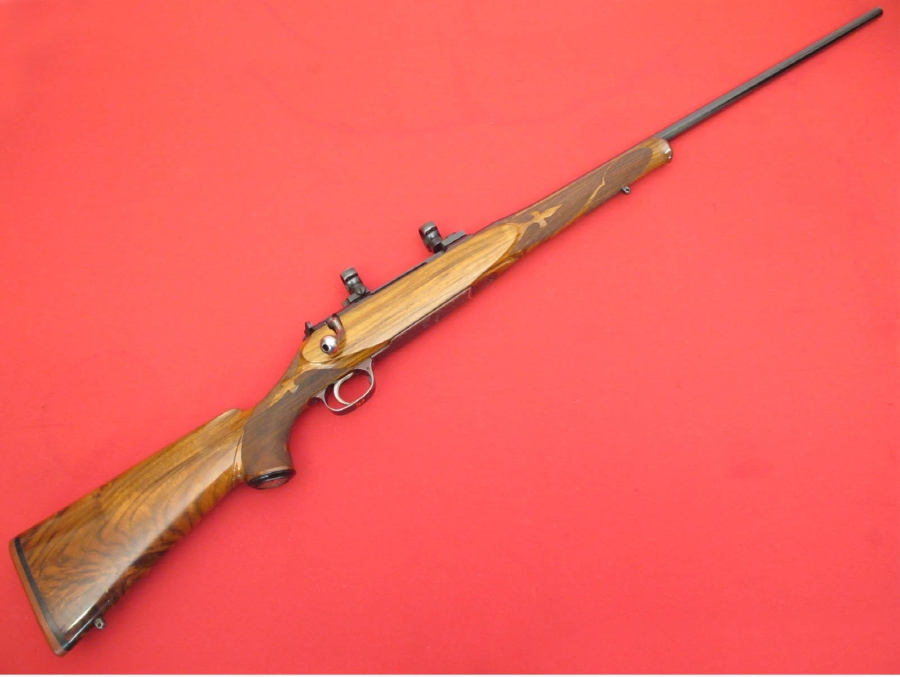 Re-barreling a standard length action rifle to get your .358 Norma Magnum also means that it should be easy to change back to something else, such as a 7mm Remington Magnum or .300 Winchester Magnum for example, just by switching the barrel again.

Moving from factory loads to handloads, Woodleigh Bullets heaviest bullet for the .358″ is their 275gn PPSN, which according to their loading manual can be comfortably driven at around 2,600fps delivering 4,639ft/lb energy. That Woodleigh bullet has a ballistic coefficient of .450, which turns the .358 Norma Magnum into a decent longer range powerhouse: capable of reliably taking shots out to 400 yards or so. 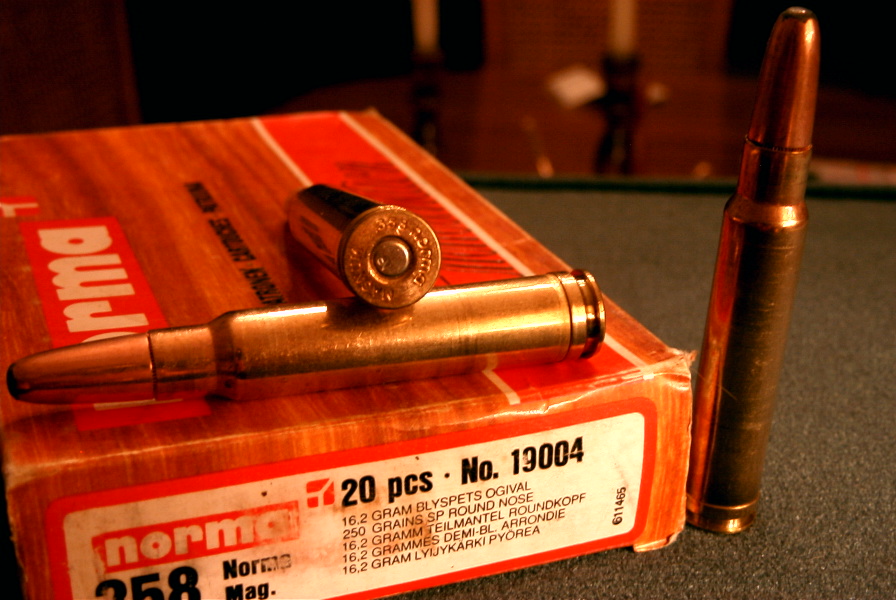 That brings us to considering one of the reasons the .338 Winchester Magnum has achieved much more popularity than the .358 Norma Magnum: and that is the issue the availability of bullets with high ballistic coefficients. There is a plethora of high coefficient bullets for the .338″, and not for the .358″. One reason for this may well be that Americans tend to think of the .338″ as a long range cartridge, and the .358″ as a “brush gun”. Given the range of bullets available for the .358 Norma Magnum at time of writing one would not choose it if one’s shooting was primarily going to be in open country at long ranges. But the reason the cartridge has a bit of a following among Australian and New Zealand deer hunters is because it combines excellent knock-down power with the ability to stretch out beyond 300 yards with good resistance to wind deflection, especially with bullets such as the 275gn PPSN Woodleigh.

Available bullets for the .358 Norma Magnum start at 200gn, such as the Hornady 200gn Interlock RN and SP bullets and go up to 275gn, such as the Woodleigh PPSN mentioned previously, which is about has heavy as you will want to go with the typical 1 in 12″ twist barrels used in these rifles.

Nosler Bullets generously publish their reloading data on-line so that provides us with an excellent starting point for looking at what one can expect to get from a .358 Norma Magnum Rifle. 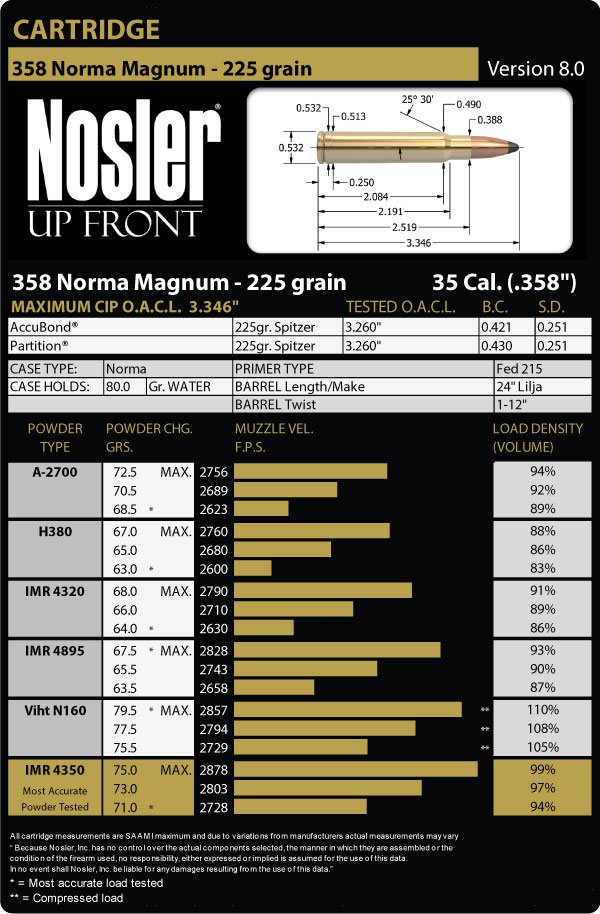 As you can see from the Nosler data above, a reloader can load the .358 Norma Magnum to velocities over 2,800fps with the 225gn Nosler AccuBond or Partition bullets. The ballistic coefficient of the 225gn AccuBond is .421 while for the Partition it is .430. These high velocities combined with reasonably high ballistic coefficients means that these loads will produce very similar long range trajectory and wind drift performance to the factory 180gn Remington Core Lokt loading for the flat shooting .300 Winchester Magnum, but the .358 Norma Magnum delivers more knock down power at all ranges. 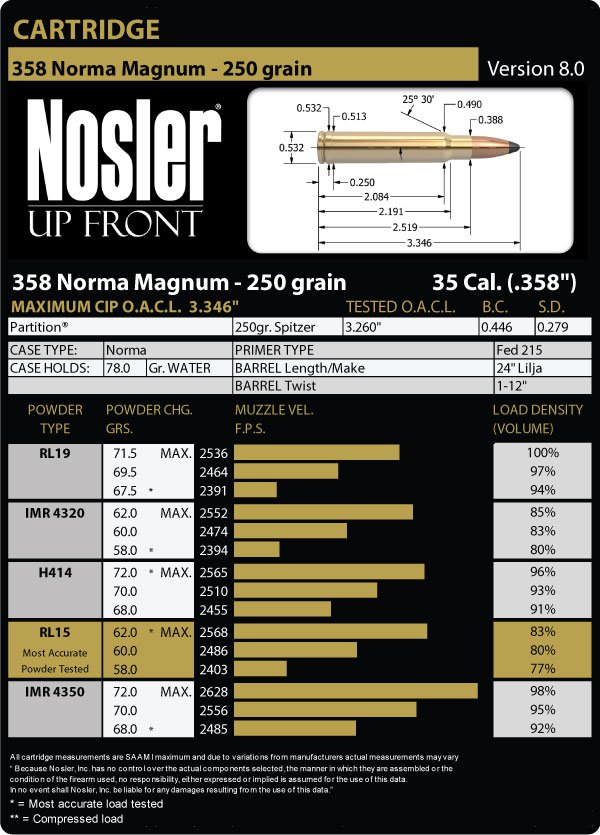 Moving up to the heavier Nosler 250gn Partition bullet the listed loads are in the 2,550fps range and the bullet has a ballistic coefficient of .446. This bullet would permit the cartridge to be used out to 400 yards and is going to deliver knock down power on a par with the .375 H&H Magnum.

The .358 Norma Magnum delivers a lot of power in a standard length action. It is on a par with the original .35 Newton, and with the Newton’s predecessor the .350 Rigby which appeared in the same period as the .375 Holland & Holland Magnum. If you are setting up a rifle specifically for long range or extended range shooting then its probably not for you. But if you are someone who understands the benefits of being a “one rifle for almost everything” hunter who expects to hunt deer species of all sizes at normal hunting ranges then the .358 Norma Magnum is a hard cartridge to beat. In some African states it will be below the required caliber size, but we should remember that the .375 H&H Magnum also does not qualify in every African state either (its legal in more, but not all).

The .358 Norma Magnum is one of those cartridges that is so good it deserves to survive and prosper. It has had a tough beginning, but it is still with us and it has acquired for itself a loyal following of enthusiasts who understand what makes it an intelligent choice and are committed to keeping it alive and kicking. We hope to see it prosper and gain popularity: Nils Kvale got his design right, and it really deserves to become a more popular cartridge on its merits. 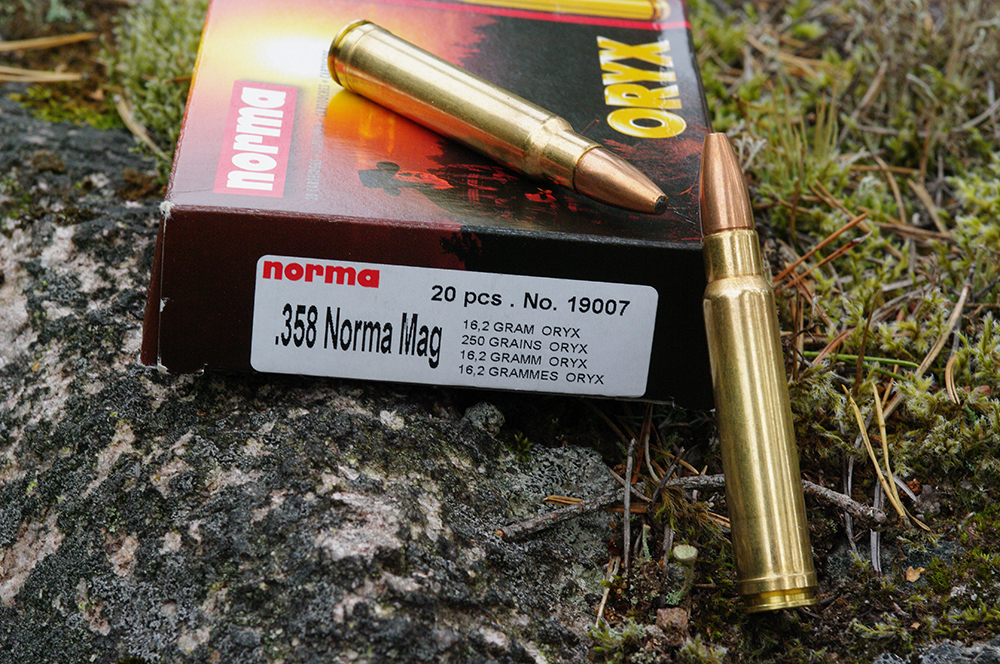