The Colt Paterson revolver was Samuel Colt’s first revolver, and it would prove to be the the creation that would propel his company into becoming a household name. There are a number of theories as to how Colt arrived at the idea of the revolver but its probably best to realize from the outset that the idea of a firearm with a rotating cylinder was not new, pepperbox revolving pistols already existed for example. What would set the revolver apart however was that instead of having a cylinder that provided a set of barrels with chambers that would rotate for each shot, the revolver would separate the barrel from the chambers, depending on a close fit between the rotating cylinder and the barrel to minimize gas leakage.

Samuel Colt was not the first to create a firearm such as this: one of the first was Elisha Collier who made a flintlock pistol in 1814 with a revolving cylinder and separate barrel. Collier’s revolving pistol required that the cylinder be rotated by hand for each shot, but it was much quicker at repeat shots than muzzle-loading single shots.

It was on a trip to Britain aboard the brig Corvo that Samuel Colt was said to have begun to develop his ideas for the revolver by observing the Corvo’s steering mechanism. Once in Britain, if you were a gun enthusiast, a visit to the Tower of London’s firearms collection was a must do and it was there, it is believed, that Samuel Colt saw an example of Collier’s flintlock revolving pistol. Back aboard the Corvo for the journey home to the United States Samuel Colt got busy and created a wooden model of a revolving pistol mechanism in which the process of cocking the hammer for firing would rotate the cylinder and lock it in alignment with the barrel: the modern revolver was born.

Underside view of a No.1 Paterson revolver. This one is the rare Ehlers Fourth Model in .28″ caliber and this revised design was made to be reloaded without disassembly. It is complete with loading ram.

This first revolving pistol was the Colt Paterson, so called because it was manufactured at Colt’s factory located in Paterson, New Jersey. The first Colt Paterson revolvers were made in .28″ caliber and was designated the No.1. The grips of the No.1 were flat at the bottom, and this would change to a beveled shape on later models. The No.1 was followed by the No.2 and No.3 pistols which were made in .31″ caliber. There is no record of a No.4 model ever having been produced, so the final Paterson was the No.5 in .36″ caliber. By comparison with modern handguns the No.1 in .28″ might best be compared with the .25ACP, the .31″ with the .32ACP, and the .36″ on a par with the modern .380ACP. All models featured five shot cylinders.

The Colt Paterson was a fairly complicated design, featuring a retracting trigger that would spring down when the weapon was cocked. The early models required that the cylinder be removed for reloading, but later models were provided with the ability to reload the chambers without removing the cylinder. That being said, removing the cylinder was a quick and easy operation, simply requiring the barrel wedge to be depressed which would allow the barrel, and then the cylinder, to be removed. Paterson revolvers were commonly supplied with spare cylinders so that instead of reloading the used cylinder a fresh loaded one could be quickly inserted into the revolver, the barrel re-attached, and the wedge moved to its locked position, so the shooter could resume firing at whomsoever was causing the emergency. They tended not to be greatly successful except in Texas where they earned themselves a good reputation that would ensure Colt’s later models, such as the Walker, would be well received in the Lone Star State. 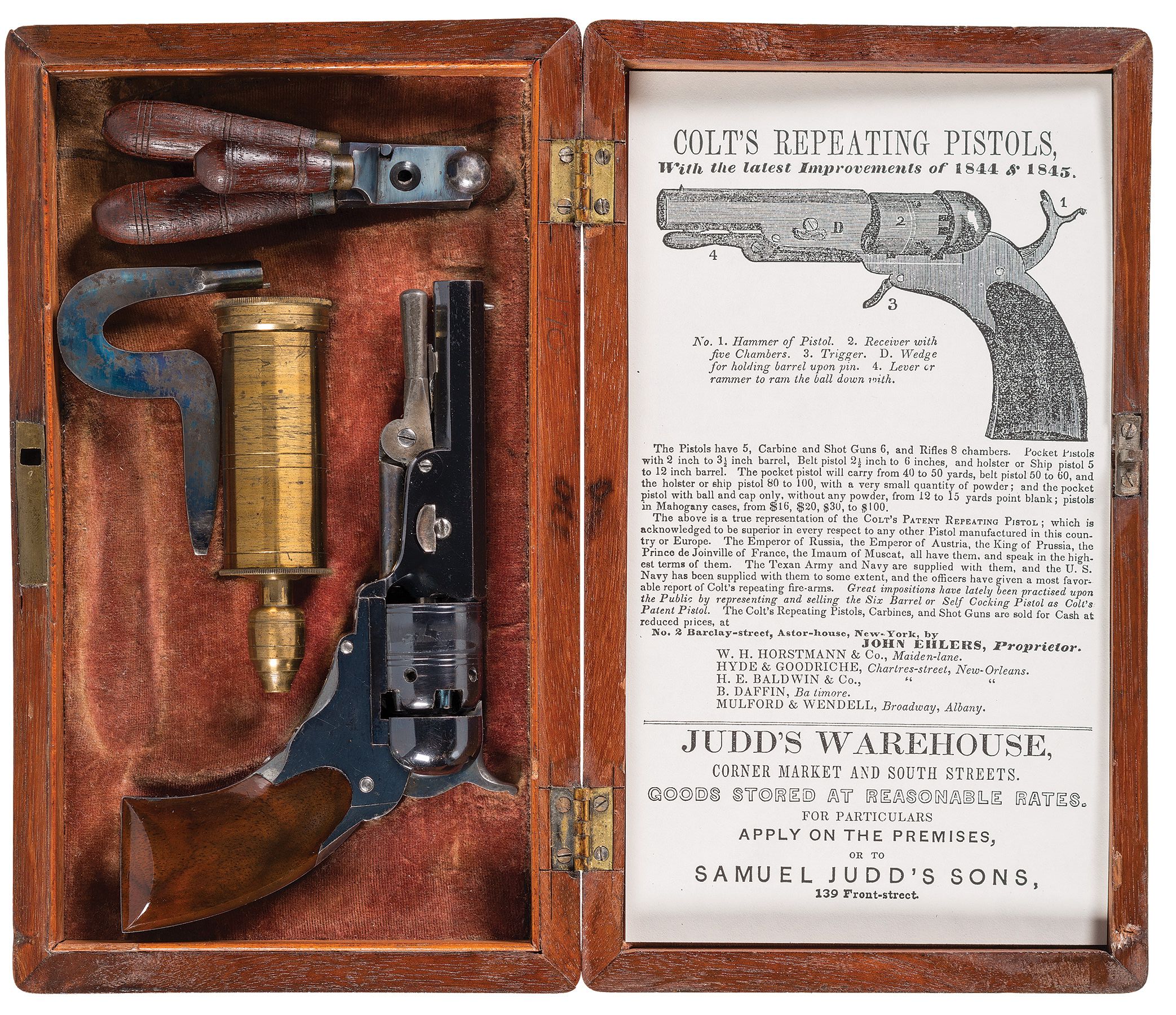 As with many, if not most new businesses, Colt’s company only survived a few years, from 1836 until 1842 before it ran out of money, and was bought out by business partner John Ehlers who continued to manufacture firearms from the existing parts stock until 1847. In the eleven years from 1836-1847 2,850 revolving pistols were made (approximately 500 of those during John Ehlers’ ownership), 1,450 revolving carbines, and 462 revolving shotguns.

The revolver in our pictures is one of the approximately 500 made during John Ehlers’ ownership. Amongst the most rare Paterson revolvers were the Ehlers’ Fourth Model revolvers, which were Paterson No.1 models made by John Ehlers around 1842. These .28″ caliber pistols have the distinction of being the smallest percussion revolvers ever made by Colt. 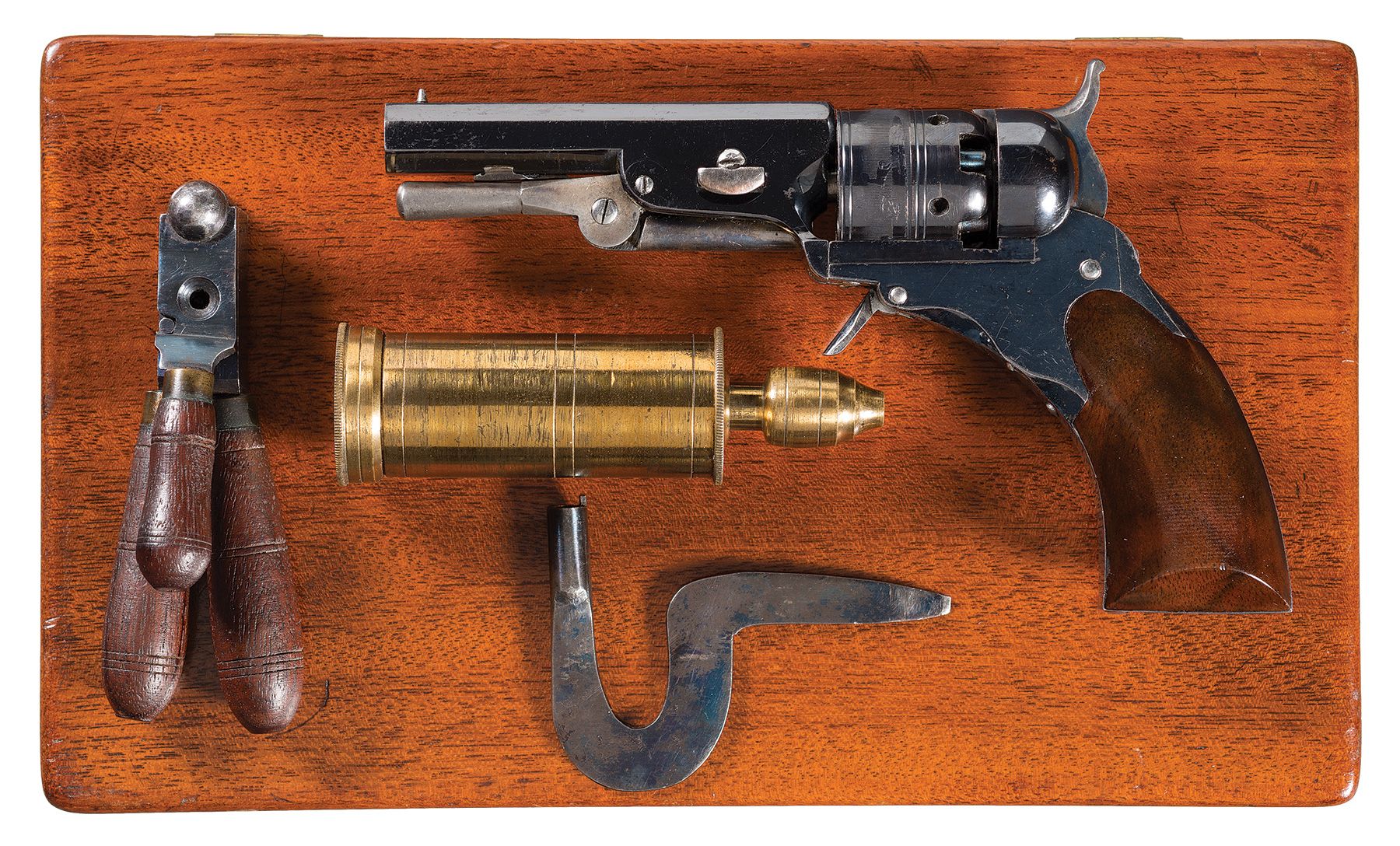 The Ehlers’ Paterson revolvers have some characteristic markings and decoration: 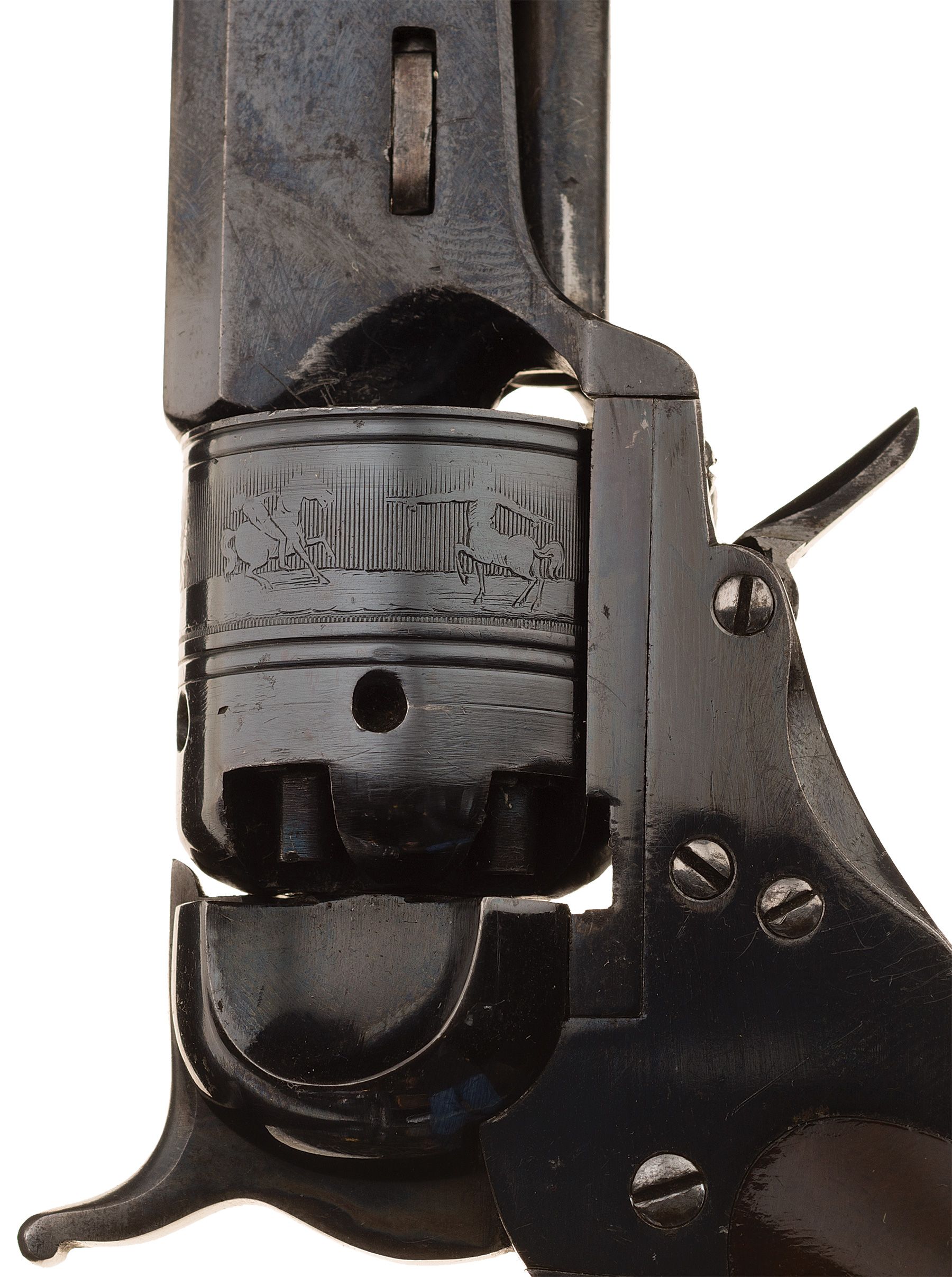 The Centaur scene goes all the way around the cylinder.

The revolvers were all finished in polished blue and had varnished walnut grips. 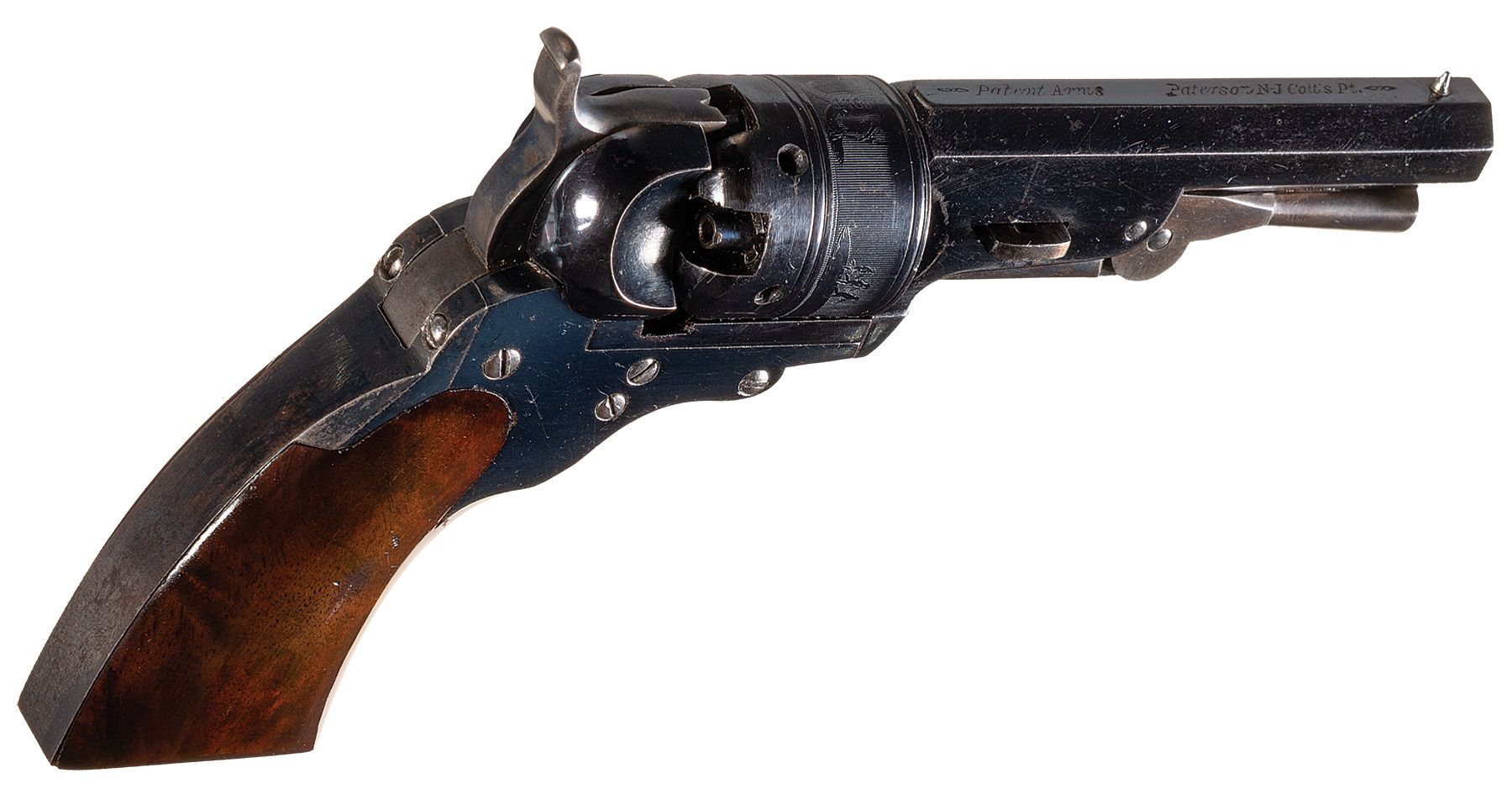 The revolver has a polished blue finish.

The Ehlers Fourth Model Colt Paterson in our pictures is coming up for sale by Rock Island Auction in their November sale to be held on November 30th, 2018.

This very rare model looks to be in wonderful condition, something that is even more remarkable given it is more than 170 years old. 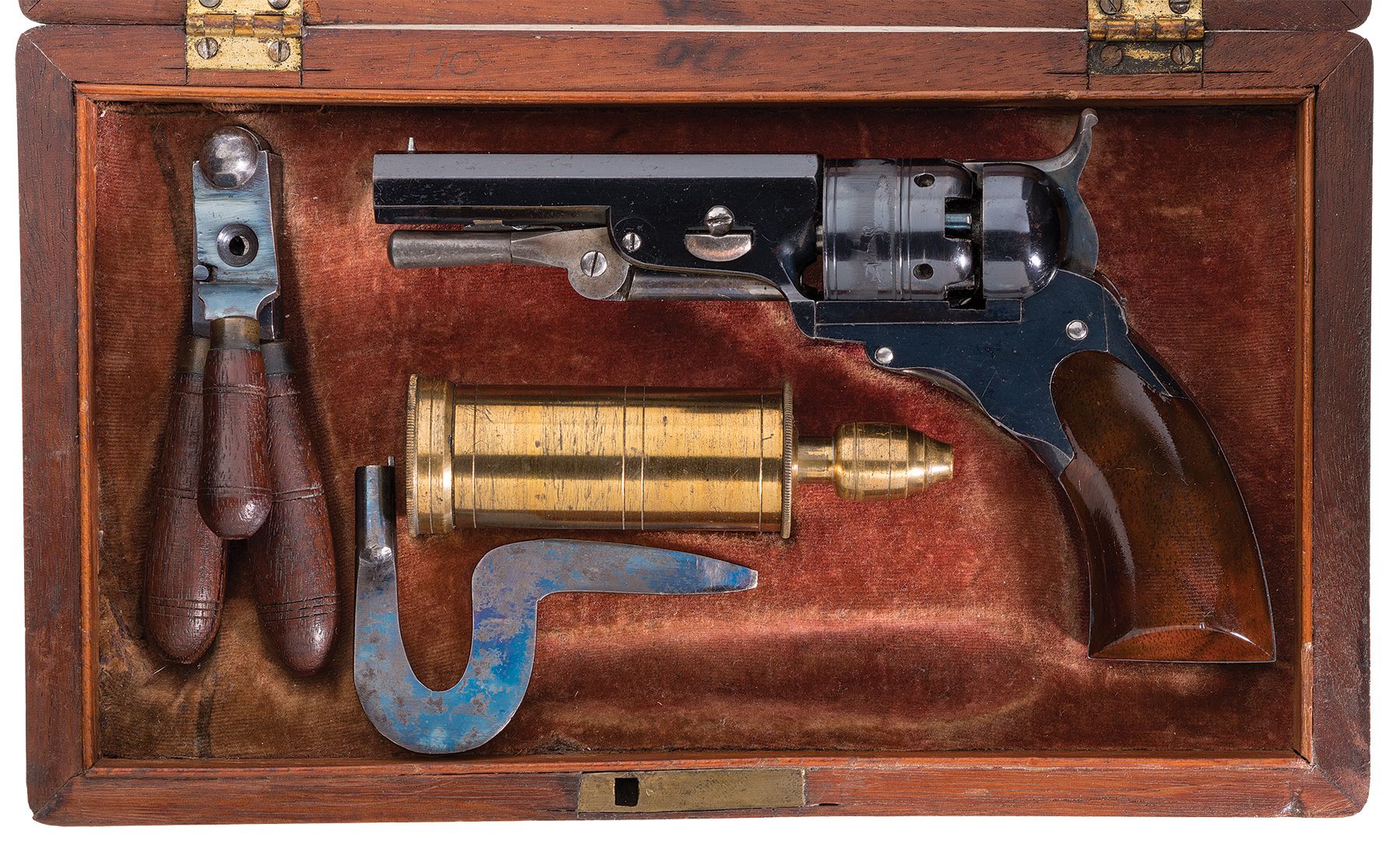 Condition of this very rare revolver is described by Rock Island Auction as follows: “Excellent. This stunning revolver is all original and retains 95% plus of the bright original high polish blue and color casehardened finish with minimal flaking on the back strap. The revolver appears to be un-fired. The cylinder retains all of the centaur scene. The barrel legend is perfect. The hammer and loading lever retain nearly all of the casehardened finish. The frame and barrel screws are finished bright and remain in excellent condition. The grips are in excellent plus condition and have nearly all of the original high polish piano finish with a few scattered and very insignificant storage marks. The case exterior is in excellent overall condition with a few very minor storage marks. The velvet interior has faded and shows compression marks from contact with the revolver and accessories but remains in good overall condition. The three handled bullet mold retains most of the original blue and color case hardened finish with excellent original turned walnut handles. The brass powder flask is also in excellent condition at retains 90% plus of the original gold-plated finish. The combination screwdriver/nipple wrench is in very fine condition and has 60% of the original nitre blue finish remaining with some scattered age spotting. This is an exceptional example of a rare Colt/Ehlers Pocket Model Paterson Revolver No. 1 in un-fired condition with rare factory case and accessories. This revolver has been a key piece in two of the finest collections of Colt percussion revolvers ever assembled. Provenance: William M. Locke Collection; R.E. Hable; The Robert M. Lee Collection.”

The opportunity to acquire a Colt revolver of this rarity, in this condition, does not occur often. So this sale represents a possibly once in a lifetime opportunity to own one of these rare Patersons, in beautiful condition. 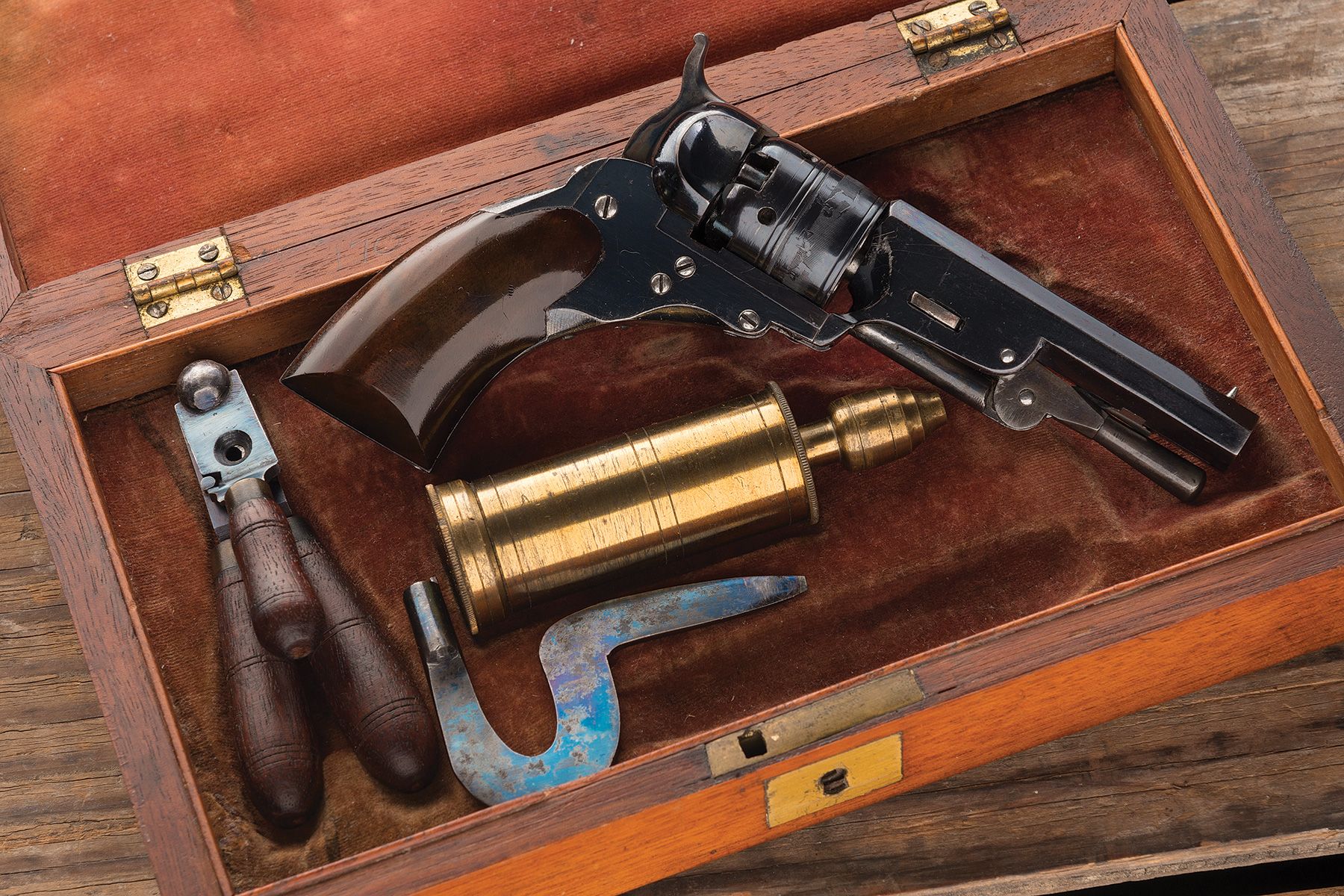