The .375 Holland & Holland Magnum was the second attempt by Holland & Holland to create a belted big game rifle cartridge suitable for magazine rifles to be used on African and Asian dangerous game. Their first attempt had been the 400/375 Belted Nitro Express (otherwise known as the .375 Veloplex) and it was made to largely duplicate the performance of the 9.5x57mm Mannlicher-Schönauer cartridge. The 400/375 Belted Nitro Express was soon to be eclipsed later in 1905 however when the Germans introduced the 9.3x62mm Mauser which outclassed both the Mannlicher-Schönauer and Holland & Holland offerings, and did it in a well made and inexpensive rifle. Given that this was an era in which Germany was rapidly arming and her industry was working to compete with Britain’s it comes as no surprise that the gentlemen at Holland & Holland took up the challenge to create a cartridge that would be convincingly superior to the 9.3x62mm Mauser: a cartridge that would raise the bar, a cartridge that would truly be suitable for any game, dangerous or otherwise, in Africa, Asia, or anywhere else for that matter. 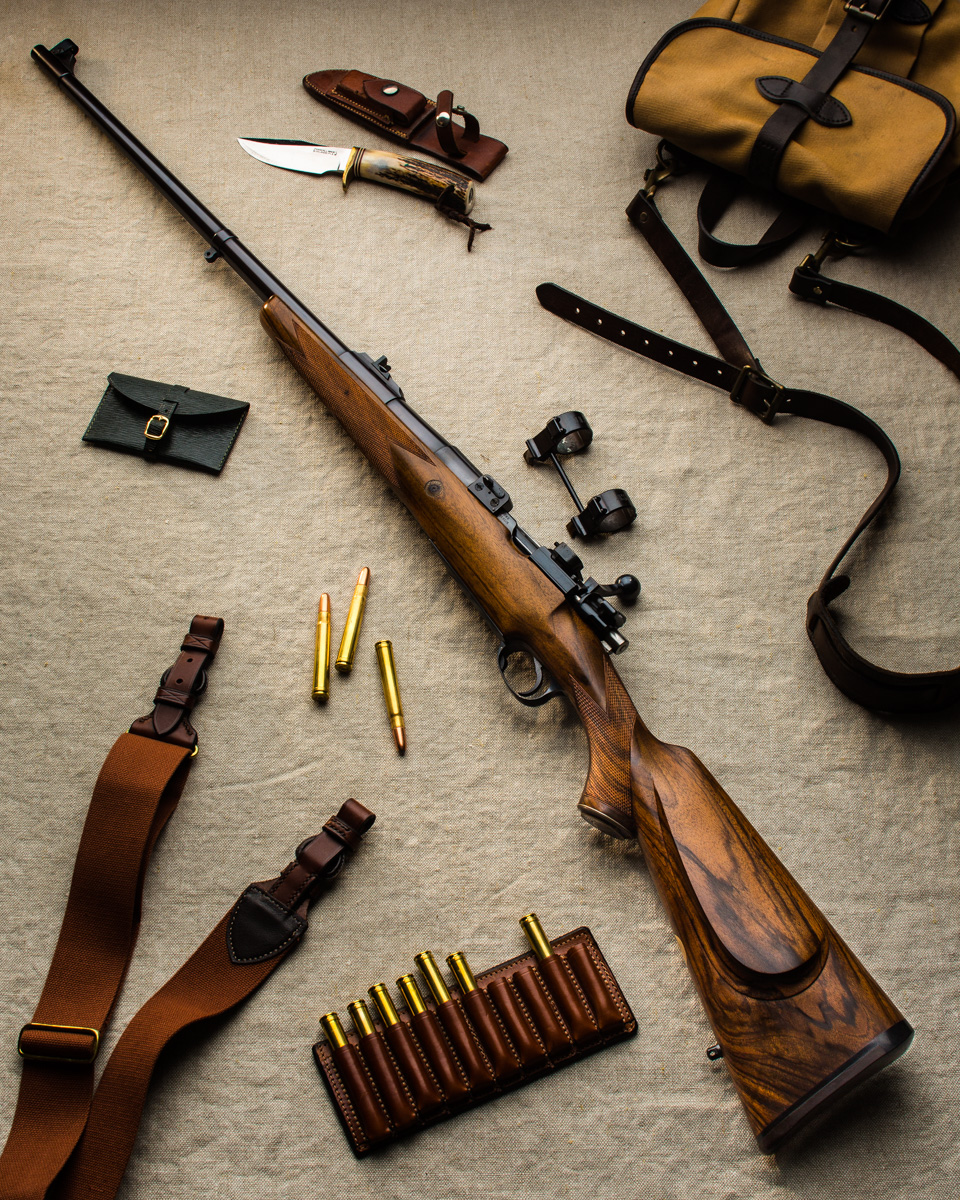 The .375 Holland & Holland Magnum made its debut in 1912: the same year as the maiden voyage of the Titanic, and two years before the outbreak of the First World War. Larger in diameter than its belted forerunner and much longer at a full 3.6″ this streamlined looking cartridge not only looked like it could take on anything that walks or crawls but its ballistic performance pretty much left the existing competition for dead. The .375 Holland & Holland Magnum was originally offered in three bullet weights: a 235gn pointed bullet ahead of 62gn of Cordite traveling at 2,800fps, a 270gn bullet with 61gn Cordite behind it for a velocity of 2650fps, and a 300gn bullet driven by 58gn Cordite to a velocity of 2500fps. With these three loadings Holland & Holland gave their new .375 Magnum the ability to be a high velocity long range cartridge, a thin skinned heavy game cartridge, or a dangerous game stopper. That original design thinking paid off and has carried this veteran of 1912 on to become the single most popular dangerous game cartridge on earth. 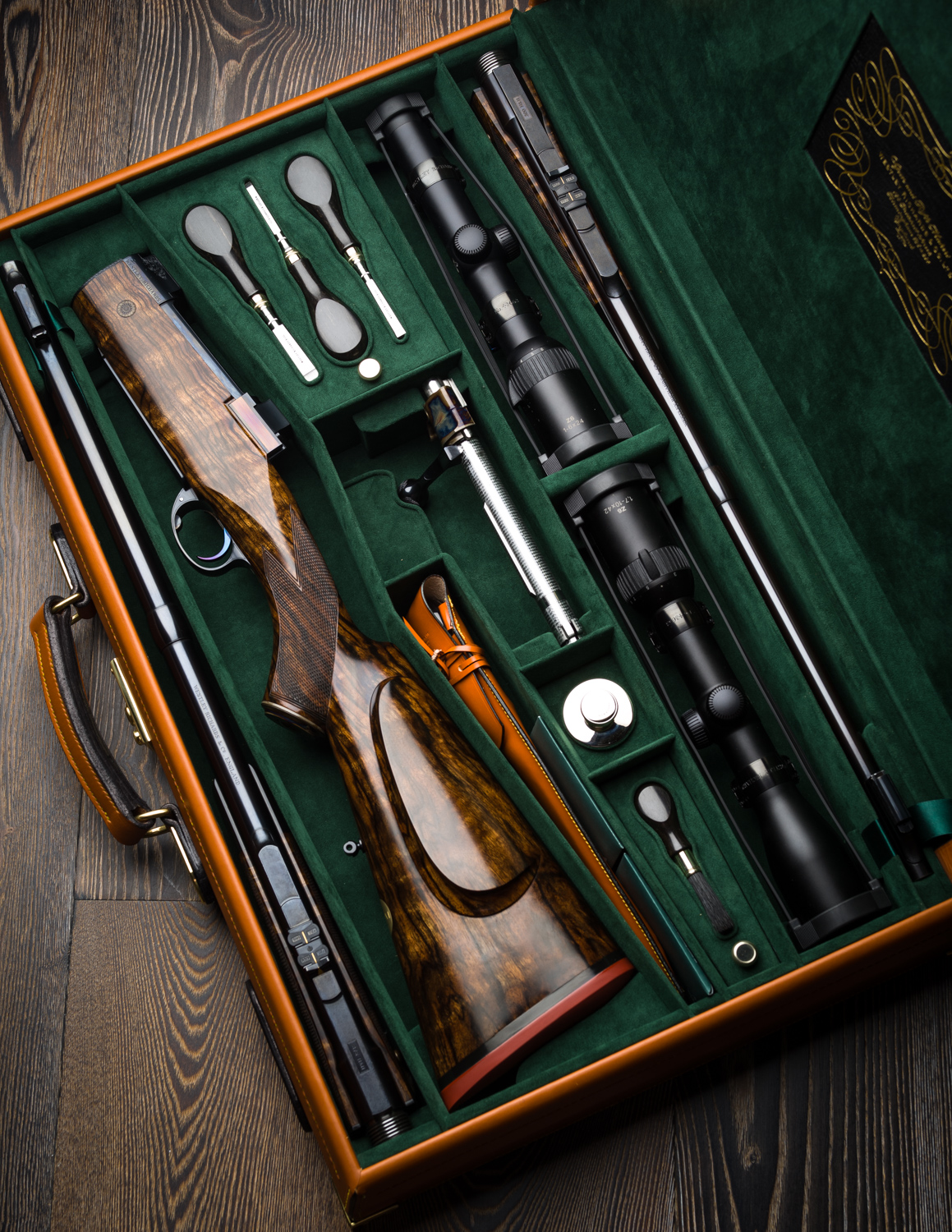 (Note: you’ll find the article about the above rifle with more high quality pictures on theexplora.com if you click here).

Not only did the .375 H&H Magnum manage to fulfil the roles of long range cartridge up to dangerous game but it also accomplished this with sufficiently moderate levels of recoil that most seasoned shooters were able to adapt to it with little or no difficulty. This remains true today with the recoil of the .375 H&H being described as a “long slow push” rather than a harsh thump. This shouldn’t surprise us if we do the math. The 235gn bullet loading of the .375 H&H at 2850fps as loaded nowadays can be compared with the 200gn bullet loadings in the .300 Winchester Magnum as an example. The .300 Winchester Magnum driving a Woodleigh 200gn Protected Point bullet at 2850fps produces 34lb/ft recoil in a 9.5lb rifle, and the 375 H&H Magnum with a Woodleigh, Barnes or Speer 235gn bullet at 2845fps produces 36lb/ft recoil in a rifle of the same weight. As bullet weight goes up so does the recoil, but the 375 H&H still tends to get up to around 45lb/ft of thump in the shoulder, which is only around 25% more than a .300 magnum. So if you are used to the boot and bellow of something like a .300 Winchester or Weatherby Magnum, or a .338 Winchester Magnum, then adapting to the .375 H&H should present no difficulties. 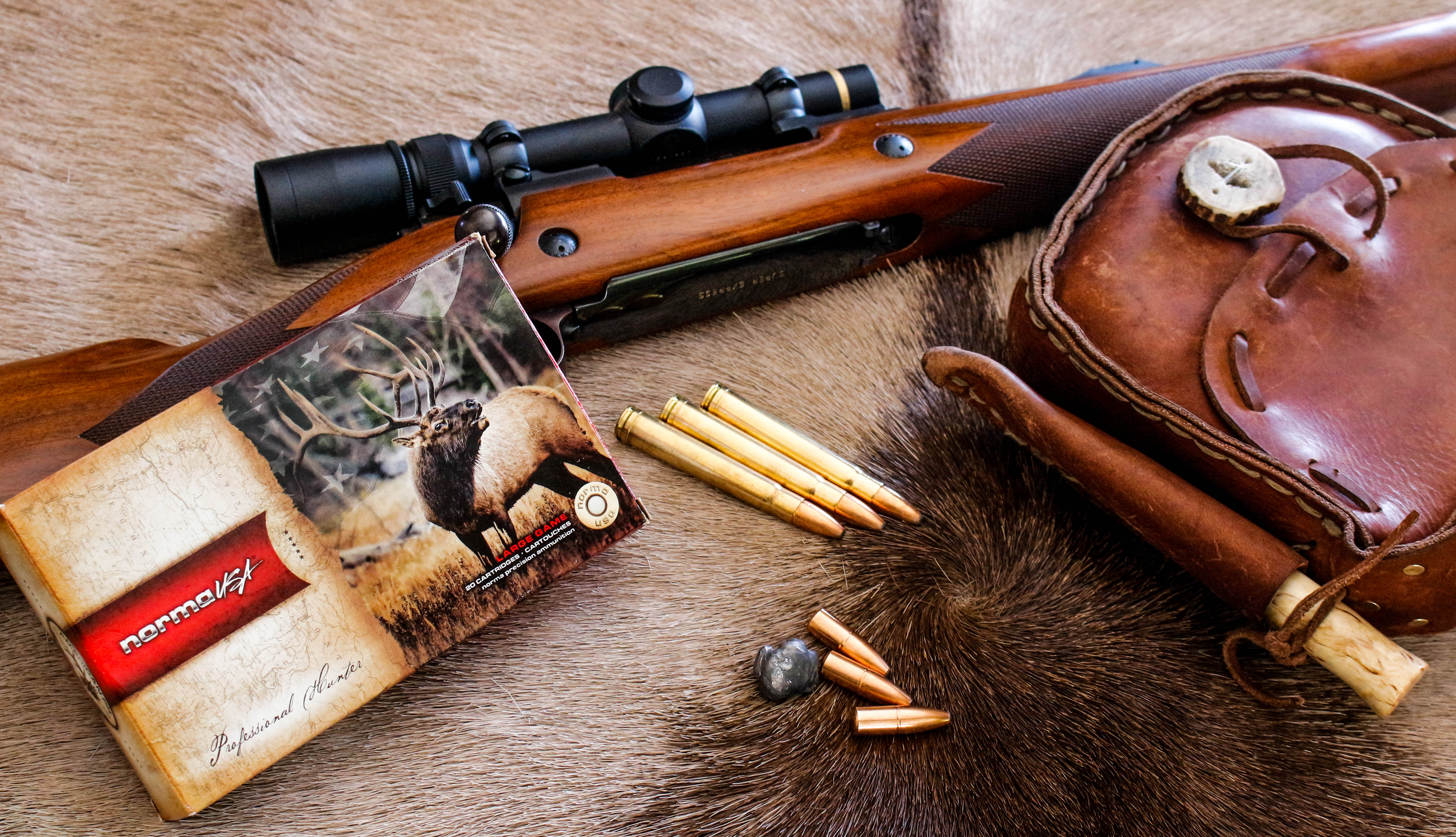 (Note: You will find SafariAmmo.net if you click here).

Does the .375 H&H Magnum still deliver the flexibility of being a long range cartridge and a dangerous game stopper as it was intended to do back in 1912? Let’s look at the long range capabilities first. Although most shooters will not think of the .375 H&H Magnum as a long range cartridge, and it cannot be expected to deliver the sort of extended range performance of a 7mm Remington or Weatherby Magnum, but it can get out well beyond the 300 yard mark as long as the “nut behind the butt” uses the right bullet for the job and has done plenty of shooting with their .375 H&H at such distances.

(Note: to see the chart full size right click on it and choose “View Image”).

Is there a long range advantage in using something like a .300 Winchester Magnum if the .375 H&H Magnum can provide such a flat trajectory curve? Yes there is: and we find that advantage when we look at the wind drift table, assuming a 10mph wind @ 3 o’clock.

In the above wind drift table comparing the same factory ammunition we can see that the .375 H&H Magnum actually has a slight advantage over the Remington 180gn CoreLokt .300 Winchester Magnum ammunition, but the extra low drag Hornady 200gn ELD-X ammunition has a significant advantage over both the others. Wind drift is much more difficult to judge than range and trajectory curve, so if I were heading off for a once in a lifetime hunt for a Marco Polo sheep in Central Asia I’d be taking a .300 Winchester Magnum with the Hornady ELD-X bullet or something similar. But the .375 H&H can certainly deliver a surprisingly flat trajectory and good enough wind drift resistance for shooting out to 400yards or a bit more. If I were heading to Kazakhstan for a maral hunt I think I’d prefer the .375 H&H Magnum over a 7mm or .300 magnum. 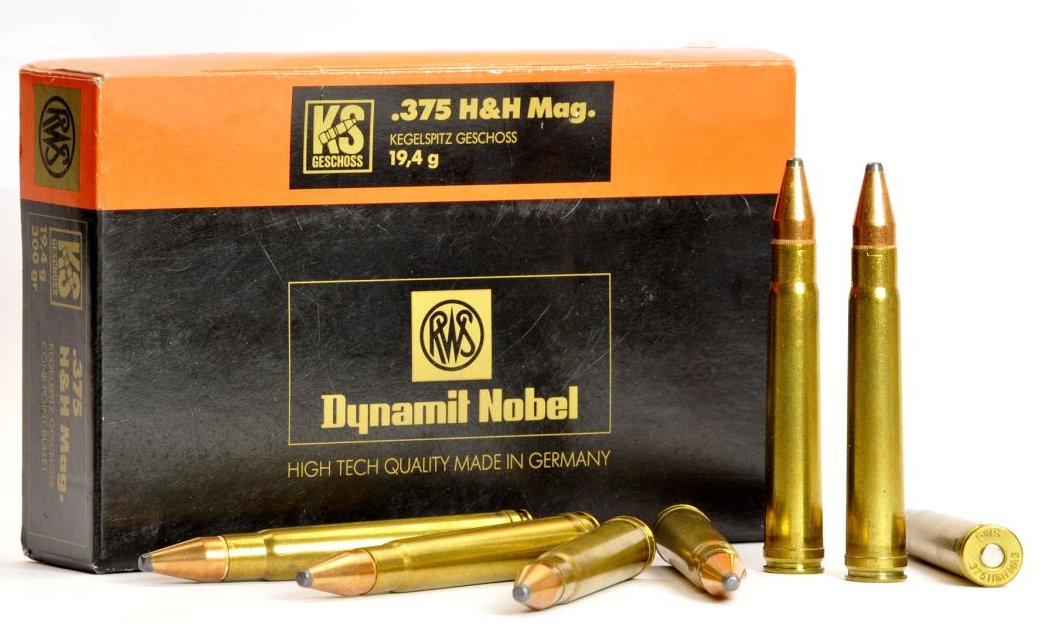 One of the better loadings for the .375 H&H Magnum for large deer and thin skinned game is the German RWS 300gn Kegelspitzer ammunition. This ammunition is especially good in the woods and even in thick cover. (Picture courtesy all4shooters.com).

Moving on from considering the .375 H&H Magnum as a long range cartridge to assessing it in its traditional role as a dangerous game cartridge, a worthwhile comparison to make is between it and the highly respected .416 Rigby. In the table below we compare the energy delivery of two .375 H&H Magnum factory loadings by comparison with an equivalent .416 Rigby loading.

When considering dangerous game stopping power the mathematics is only a guide however. The bullet needs to penetrate and deliver brain stopping shock in order to stop the creature that might just be trying to stomp you. The .375 H&H Magnum has earned itself a good reputation on dangerous game up to and including elephant. The 350gn Woodleigh FMJ bullets as shown in the above energy and momentum tables in Trace 2 have a good reputation for penetration. The .375 H&H Magnum is of course not the equal of the .416 Rigby but it does come respectably close. It is certainly enough rifle for buffalo and is the legal minimum for dangerous game in some African states. For dangerous game with the .375 H&H Magnum bullet choice is important and the Woodleigh Hydro bullets have an excellent reputation for penetration and delivering a significant dose of hydrostatic shock. Their penetrating ability is so high that they are not recommended for use in herd situations. 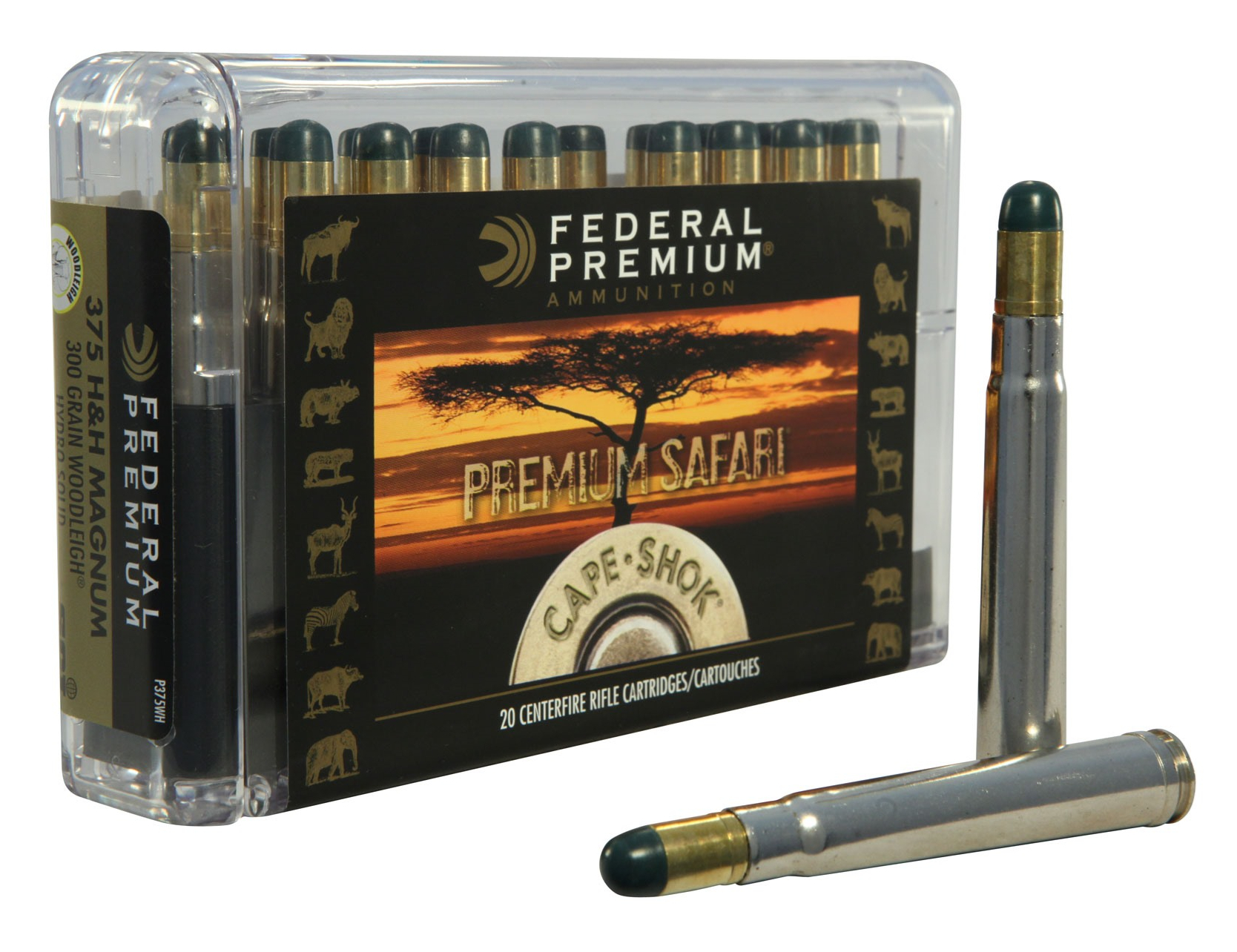 The Federal Cape Shok loaded with the Woodleigh 300gn Hydro bullet is one of the best choices for the .375 H&H Magnum for use on dangerous game. (Picture courtesy midwayusa.com).

(Note: You will find the above ammunition at Midway USA if you click here).

The .375 Holland & Holland Magnum is an extraordinarily flexible cartridge and it is for that reason it has been described as the greatest all around cartridge on earth. If a cartridge becomes as popular as the .375 H&H Magnum is then there is good reason for it. In the case of the .375 H&H Magnum this cartridge can effectively tackle most hunting situations from long range shots in open country to up close and unfriendly with dangerous game in Africa or Alaska. There is a great range of ammunition types available to adapt the .375 H&H Magnum to whatever you have planned for it: and not only that but there is a fabulous range of rifles made to suit most any budget from affordable to astronomical and all the shades in between. 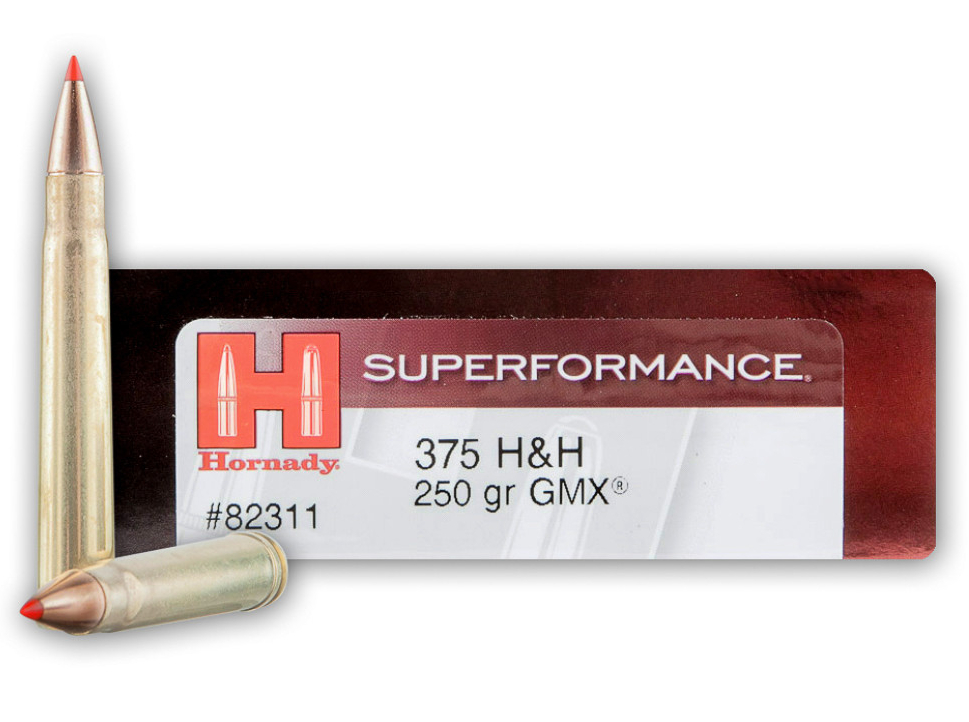 (Note: the above pictured ammunition is available from Lucky Gunner if you click here).

The .375 H&H Magnum is sometimes referred to as “The World’s 30-06”. It is one of the most flexible and adaptable cartridges in existence and its likely to remain highly popular long into the future.