The curious thing about the creation of the Volkswagen is that it was not just the brainchild of one man. Most creations are not the result of one person having a “eureka” moment. Typically they are the result of the input of multiple ideas from a number of people. This was very much the case for the Volkswagen. Although Dr. Porsche had a vision for an inexpensive car that ordinary people could afford he was inspired by the ideas and inventions of others, and then merged those ideas in with his own to create the Volkswagen, and then his Porsche sports cars. To deal with all the people involved and the circumstances of each one is the complexity of which books are made so I’ll try to deal with some of the major influences and a few of the influential people, so this abridged history will not be complete. Nonetheless our journey into the creation of the Volkswagen will take us not only to Germany, but also to Czechoslovakia and Austria-Hungary. 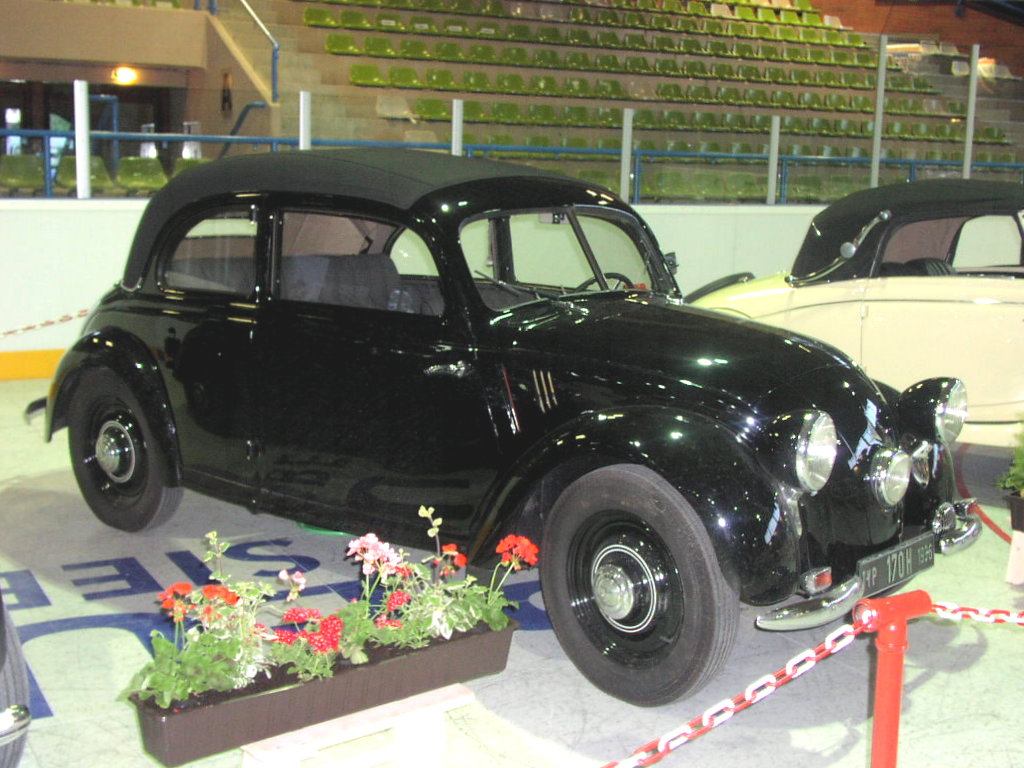 The Mercedes-Benz 170H of 1934. Not exactly a “People’s Car” but looking rather like the Tatra and Volkswagen, it was designed by Hans Ledwinka before the Volkswagen and features a rear mounted engine. (Picture courtesy wikimedia).

Ferdinand Porsche worked for a number of companies including Daimler-Benz and Steyr. His life and achievements make fascinating reading, he was even the chauffeur of the Archduke Ferdinand during his military service. Happily he was not driving the Archduke and his wife in Sarajevo on the fateful day that they were assassinated by Gavrilo Princip, the event that launched the world into the Great War.

Having been made redundant by Steyr in 1929 Ferdinand Porsche set up a first and later a second automotive design consultancy along with others including his son Ferry. It was because of his high profile through the work he had done in automotive design and in the design of racing cars that he was called upon by Adolf Hitler. Hitler had seen a car design that he liked, that he envisioned as the seed idea of his “People’s Car” and he wanted Ferdinand Porsche to work with the designer of that car, Hans Ledwinka, who was an Austrian working in Czechoslovakia for Tatra and leading their design team, to create it. The design team at Tatra, which had input from a brilliant consultant named Paul Jaray, had been working on a modest priced car with an aerodynamic body powered by a rear mounted horizontally opposed engine. This car was the Tatra V570, and it had caught Hitler’s eye. Tatra had decided not to go ahead with putting that car into production. Hitler wanted something rather like that. 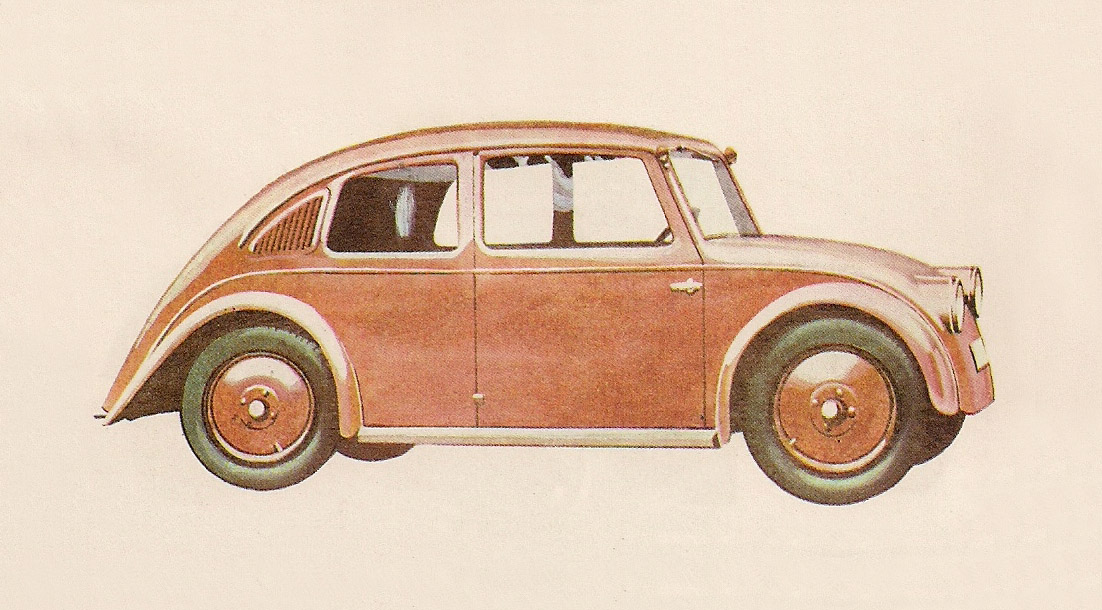 A design never put into production, the Tatra V570. The car that caught Adolf Hitler’s eye. The inspiration for the Volkswagen. (Picture courtesy heinkelscooter.blogspot.com.au

Tatra did go ahead with a car based on the merging of ideas in their design team but it was a large luxury car with a V8 engine, the Tatra T77, which was later refined to become the Tatra T87. 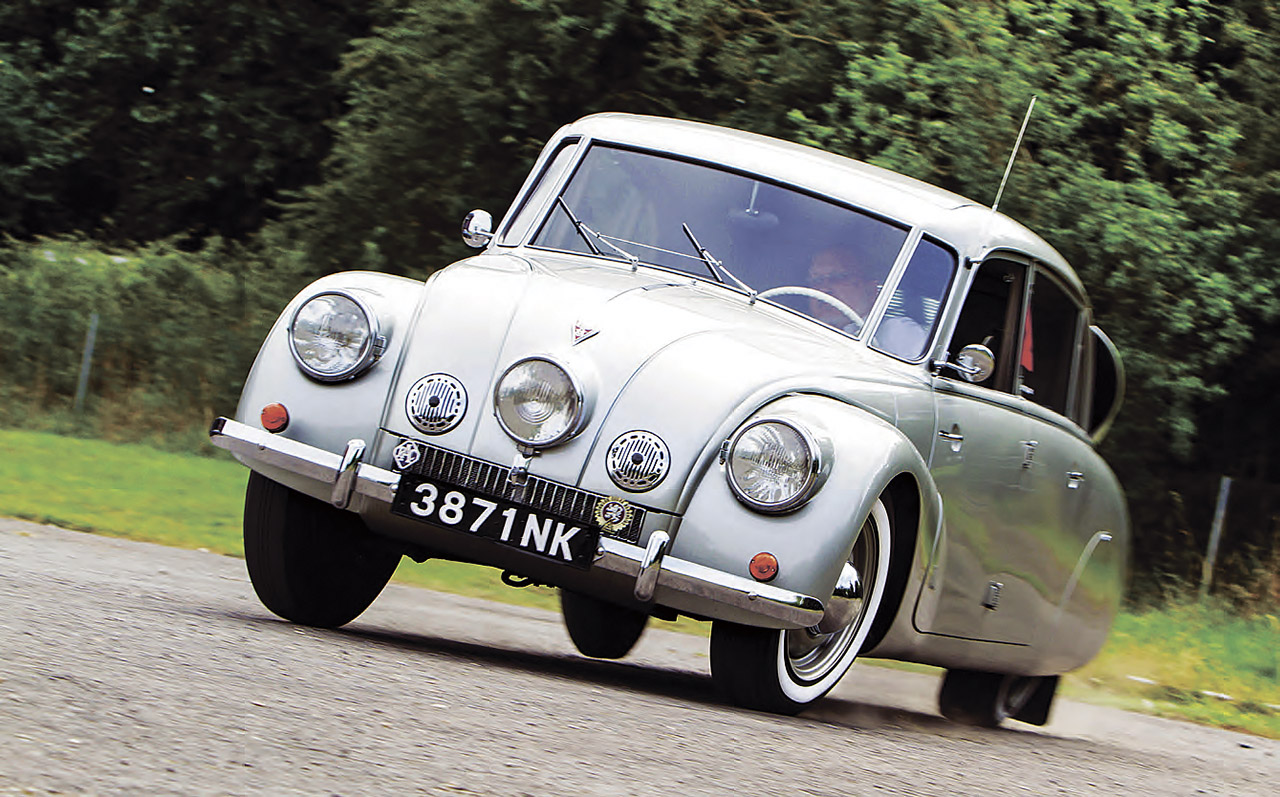 A Tatra T87 under hard cornering with the combined effects of the rear mounted alloy V8 engine and swing axles being apparent. (Picture courtesy drive-my.com)

The Tatra T87 in particular became quite popular with senior Nazis including Ernst Heinkel the Nazi aircraft designer and Erwin Rommel of Afrika Corps fame. The American writer John Steinbeck also owned one. 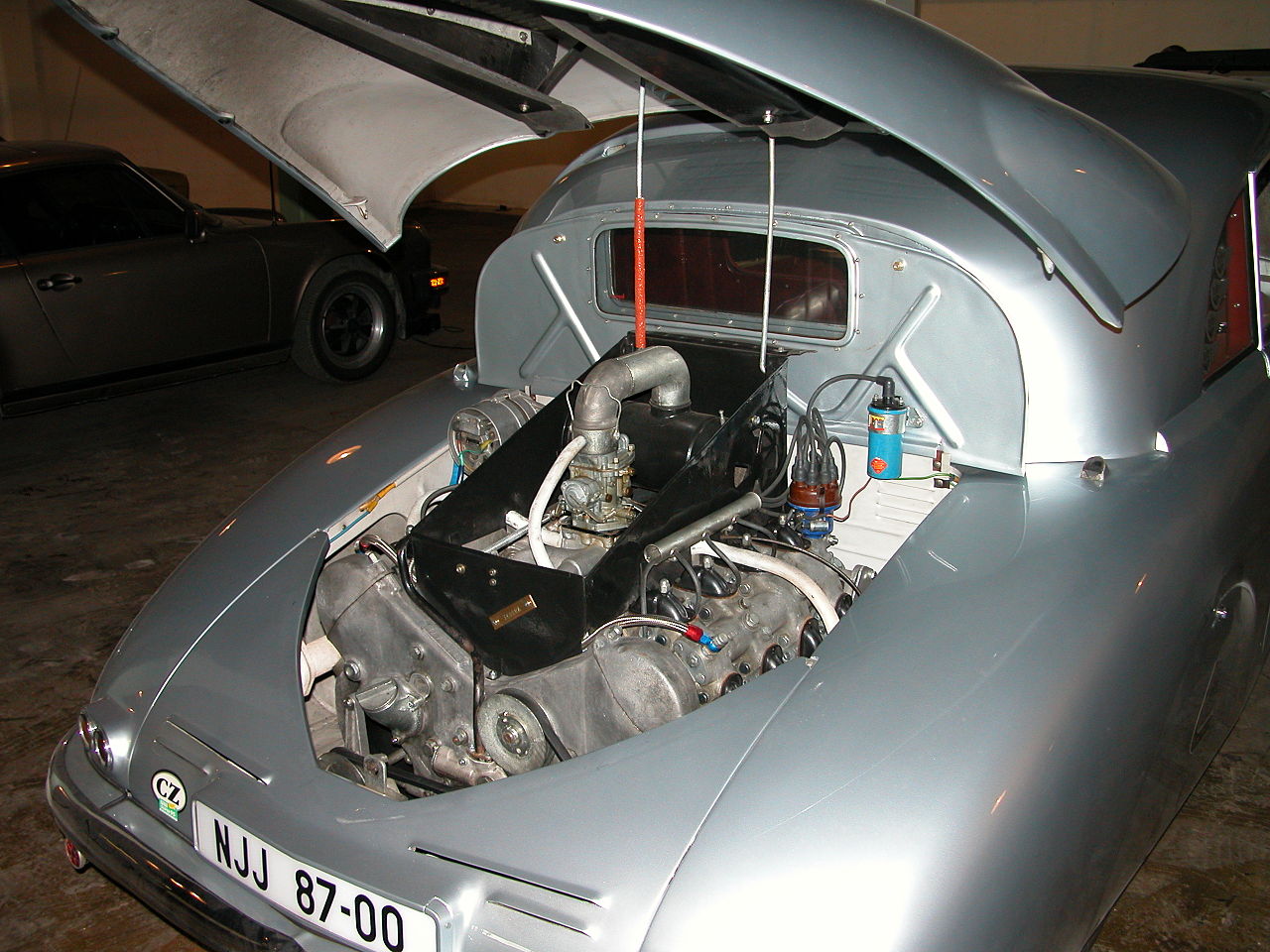 The rear mounted alloy V8 engine of the Tatra T87 is a more impressive sight than one gets when opening the engine bay of a Volkswagen. This car is in the Lane Motor Museum. (Picture courtesy wikimedia).

Hitler met with Hans Ledwinka over dinner numerous times and encouraged he and Ferdinand Porsche to collaborate on the creation of the People’s Car. Ferdinand Porsche freely admitted that during the design process “Well, sometimes I looked over his shoulder and sometimes he looked over mine”. It was a process that brought together two brilliant minds, but resulted in the management at Tatra deciding that Hitler was stealing their patented ideas so they sued the new Volkswagen company. Hitler advised Ferdinand Porsche not to be too concerned about the law suit. Not long afterwards he invaded Czechoslovakia and put an end to the legal proceedings whilst achieving some of his other political objectives.

During 1934 Hitler had advised Ferdinand Porsche to dispose of the Czechoslovakian citizenship telling him that Czechs were, in his opinion, “sub-human”. So Dr Porsche was persuaded to renounce his Czech citizenship and take on German citizenship. It was not long before he found he was also persuaded to join the Nazi Party, and soon found himself with SS membership as well as befitted the “Great German Engineer” title he had been given.

A new city called Stadt des KdF-Wagens (now modern day Wolfsberg) was created and the Volkswagen factory was established by the Deutsche Arbeitsfront (DAF), the Nazi Labour movement under Senior Nazi Robert Ley’s leadership, and on 26th May 1938 Adolf Hitler laid the cornerstone of the factory and named the car they were to produce the KdF Wagen (Kraft durch Freude (‘Strength Through Joy’) Wagen.

Ferdinand Porsche and his son Ferry found themselves in the uncomfortable midst of the top ranking Nazis. This must have been a deeply troubling time for both of them, these were dangerous people to find yourself amongst. One word out of place could have lethal consequences. 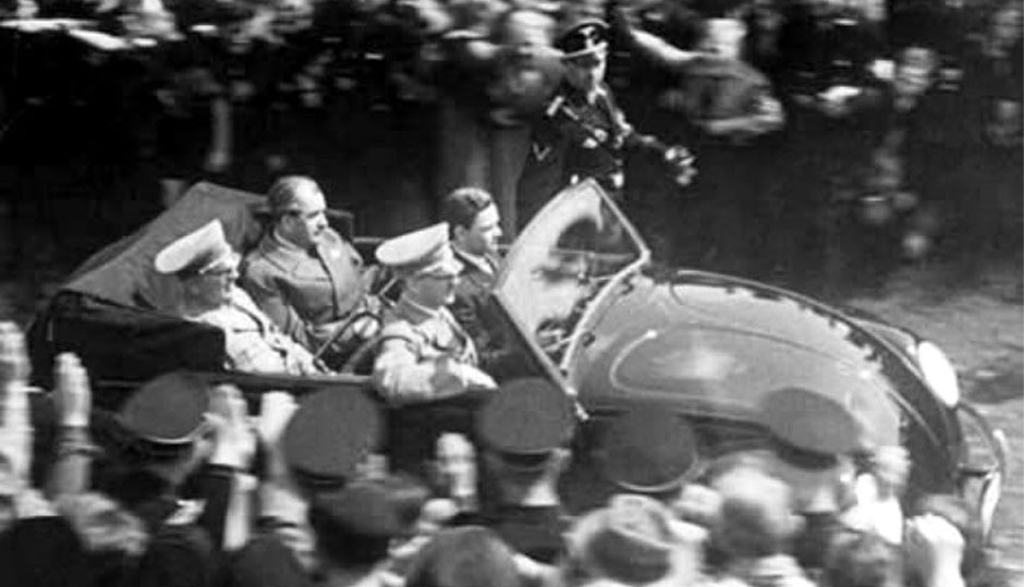 In the back seat are a tense looking Dr. Ferdinand Porsche with a relaxed Robert Ley, the head of the Nazi Labour organization Deutsche Arbeitsfront, (DAF), who were in charge of the Volkswagen factory. In the front seat a confident looking Adolf Hitler and a nervous looking Ferry Porsche, Ferdinand Porsche’s son. (Picture courtesy stuttcars.com)

In these last three posts we have been looking at the origins of the Volkswagen, vision, design, and the socio-political environment which fostered its creation. This means we have had to spend some time looking at the dark Nazi era in Europe in the years leading up to the Second World War. In Part 4 we move away from this into the period of freedom and peace of the post war era, and Ferry Porsche’s emergence in the story of the Volkswagen, and of the Porsche.