Back in the post war days of the fifties and sixties the British decided that the American idea of “badge engineering” would be a good way to keep all the traditional British marques current whilst keeping manufacturing costs and spare parts inventory affordable and manageable. This was particularly evident when British Motor Corporation came into existence which took under its mighty umbrella Austin, Morris, Wolesley, Riley and MG. The idea of badge engineering is to create a basic car model, and then change the styling somewhat by using a different grille, different tail lights, different trim and of course different badges to make that car seem to be a model from a different marque. The mechanics under the bodywork however are kept either the same or very similar.

In the case of the legendary Morris Mini the badge engineered variants included the Austin Mini, Wolesley Hornet, and, perhaps the nicest of them all, the Riley Elf. 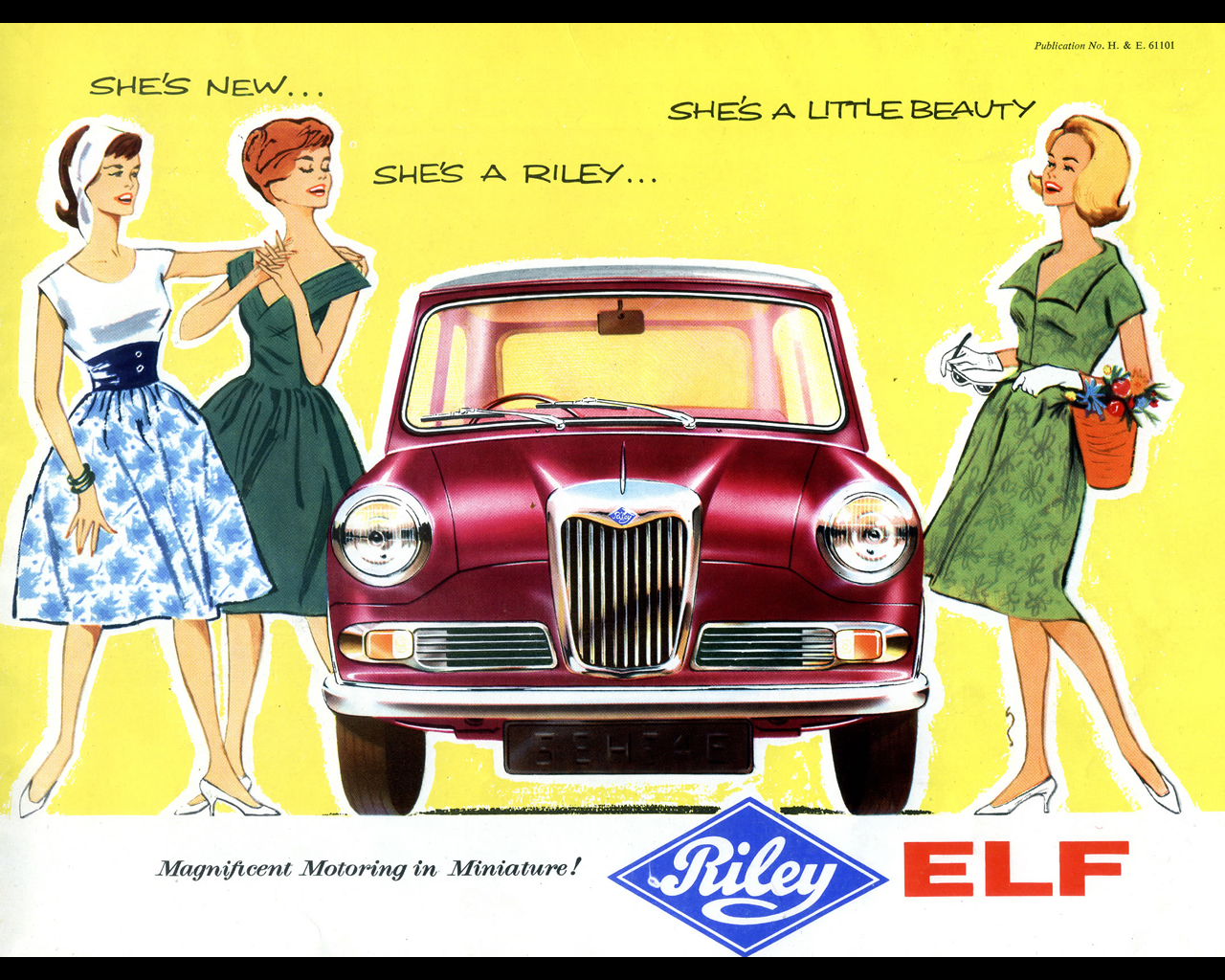 The Riley Elf was one of the most expensive of the BMC Mini’s and was intended as a small “luxury” car. Interestingly much of the advertising for the Riley Elf that we find from that era tends to be aimed at women. However, the Riley Elf can be turned into an impressive little sports machine with about the same level of effort it takes to do the same thing to a standard Mini, so it was very much a car for the boys and the girls. 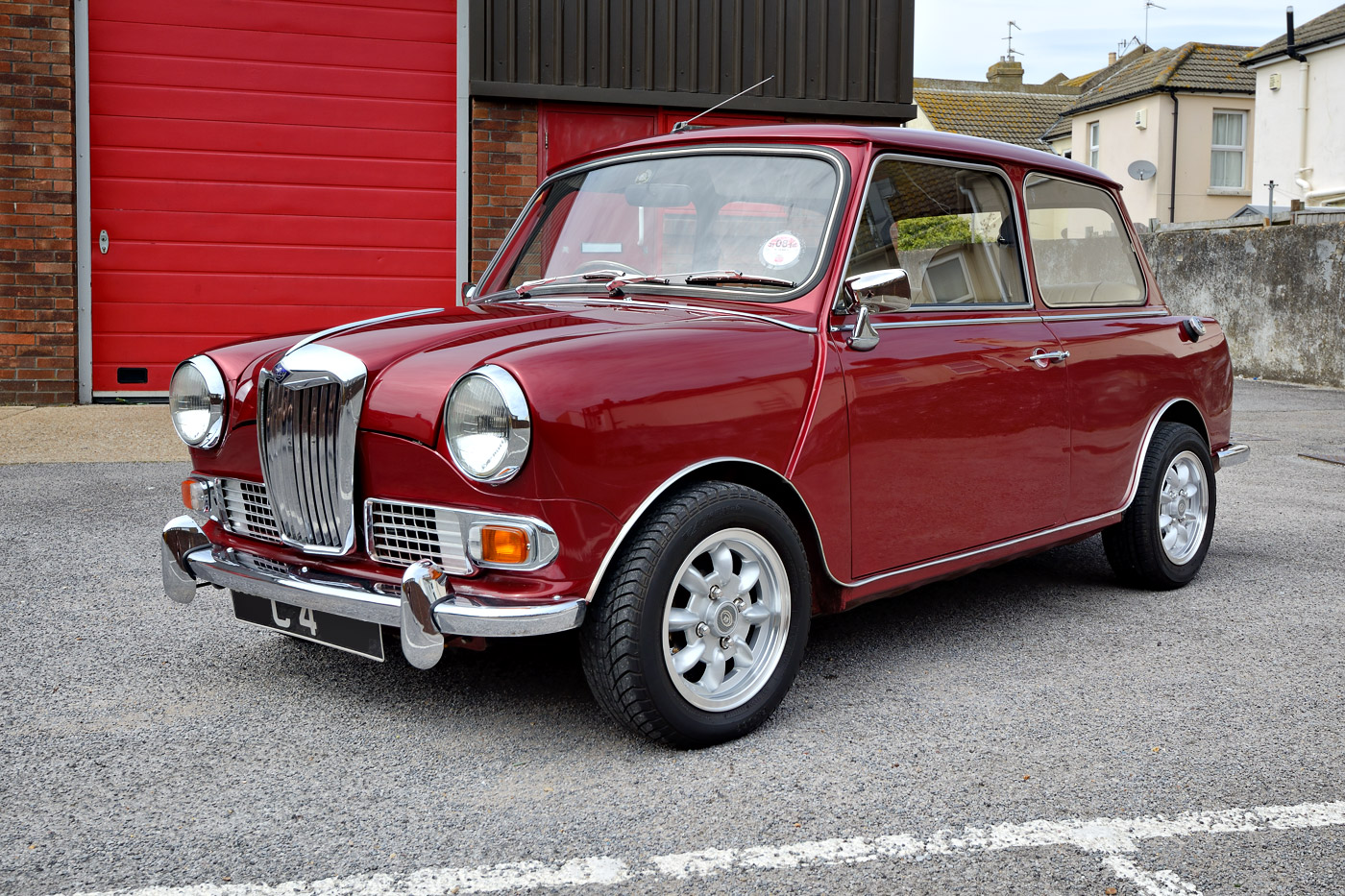 This 1968 Riley Elf Mk III Wood and Picket bare metal conversion with 1275cc GT engine is a beautiful example of how some custom performance work can turn a Riley Elf into a very desirable sports car. Note the wind up windows on this Mk III car. (Picture courtesy Lens Luther).

So although the Riley Elf was not driven by the likes of Paul McCartney nor did it feature as a prop of choice for Carnaby Street fashion yet it has at least as much potential for customizing into a highly desirable enthusiasts car. 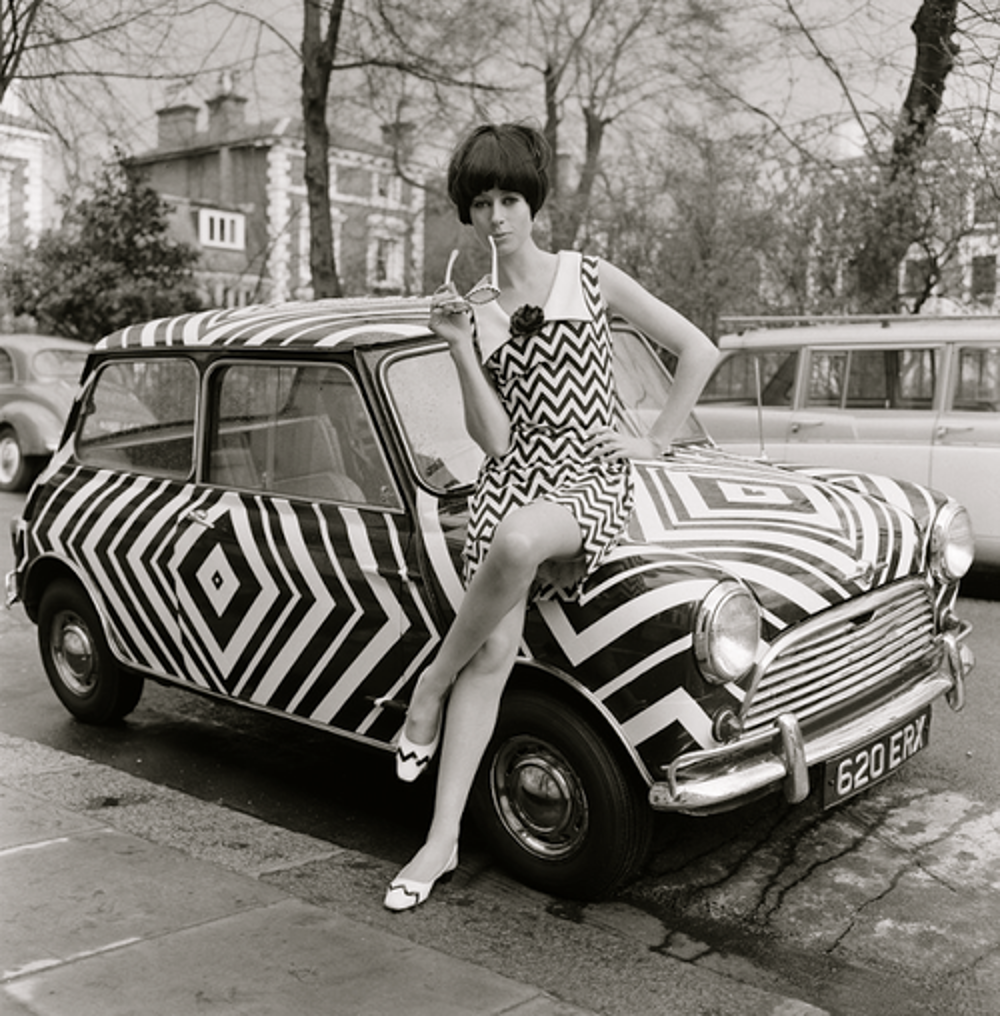 The Riley Elf is simply a Morris Mini with a different front grille, and with a boot (or trunk for our US readers) and upgraded interior treatment including a wood veneer dashboard and leather trim. The Mk I cars having leather and cloth trim and the later Mk II and Mk III having all leather trim. 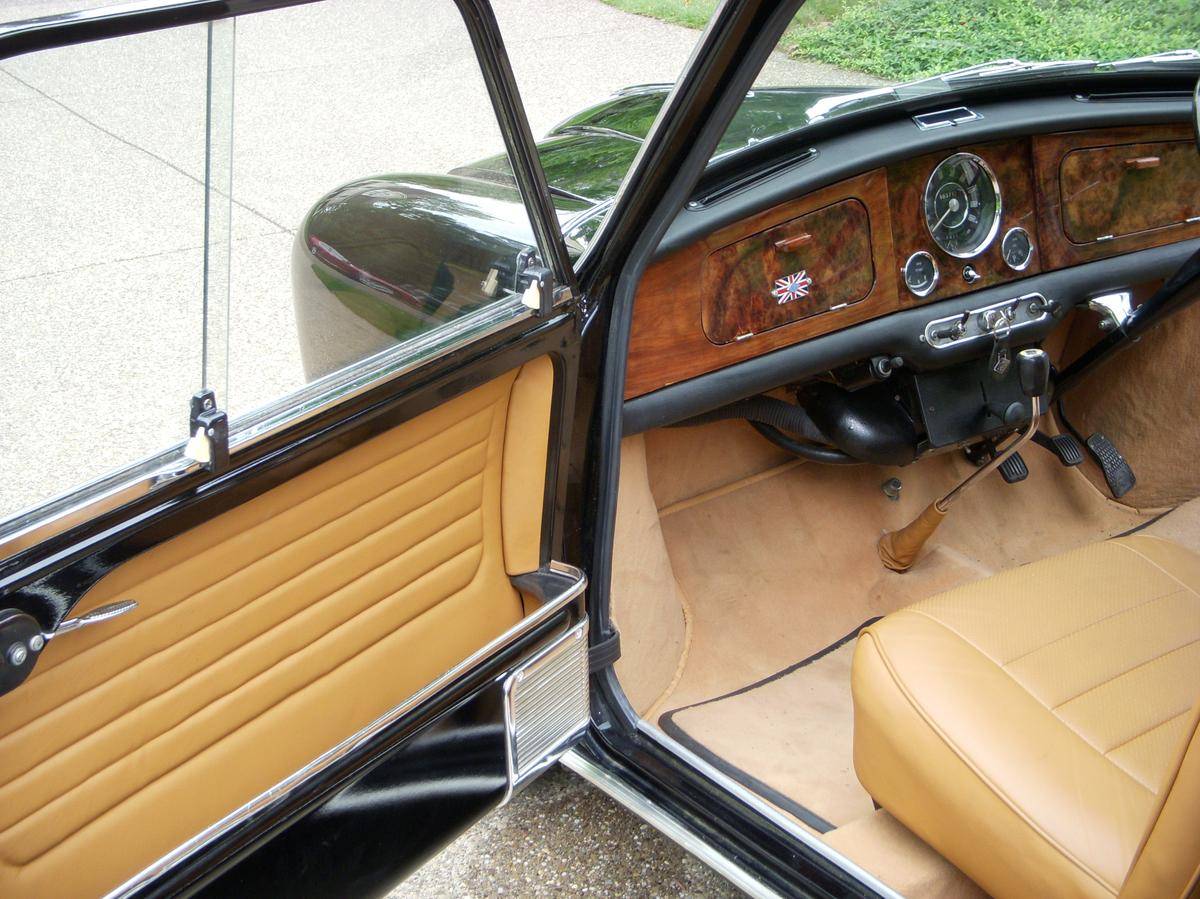 The suspension of the Riley Elf, the engine and transmission were all straight from the Mini so opening the bonnet/hood presents a familiar sight. 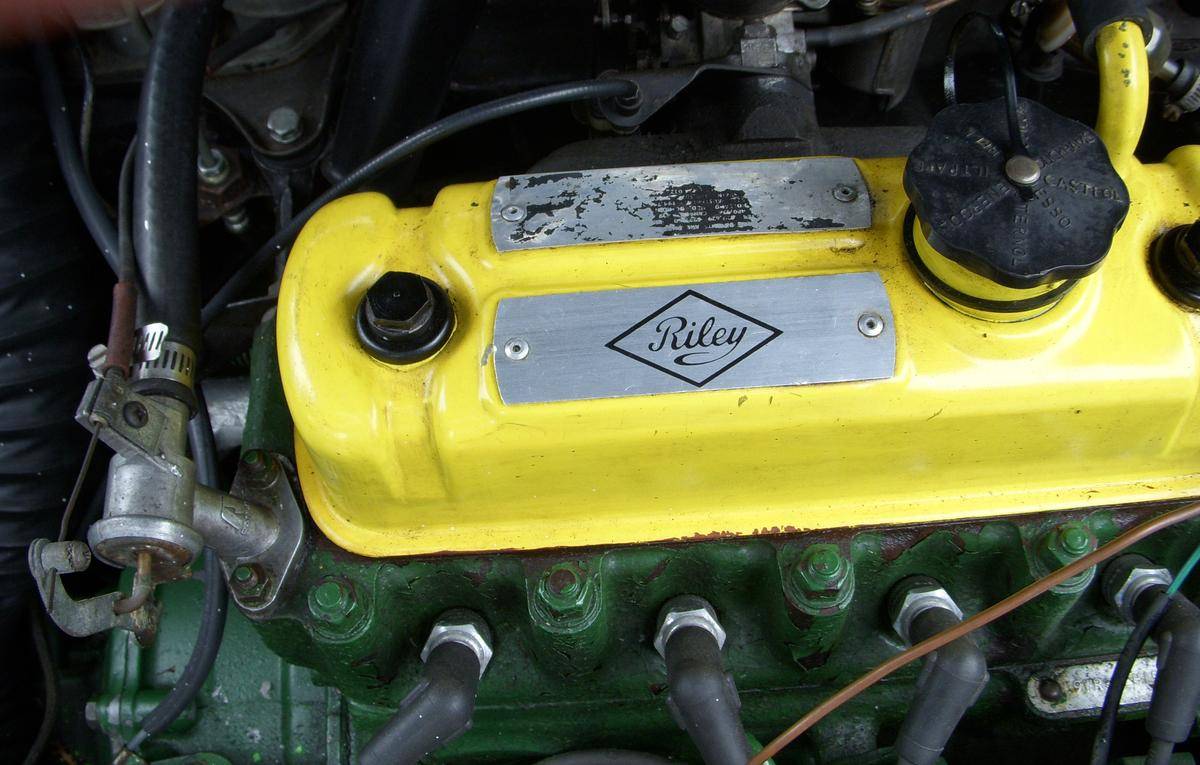 Everything in the engine bay of the Riley Elf will look familiar to anyone who has looked under the hood of a Mini. The Riley badge on the rocker cover being an example of badge engineering. (Picture courtesy Hemmings).

The Riley Elf, with its extended boot and luxury trim finished up being about ten percent heavier than a standard Mini and weighed in at 1,407 lb for the earlier Mk I with its rubber suspension increasing to 1,416 lb for the Mk III with hydrolastic suspension.

Engine capacity of the Mk I was the standard Mini 848cc producing 34bhp (Type 8WR). For the Mk II the engine capacity was increased to be the same as that of the Mini Cooper at 998cc with a single HS2 carburettor and producing 38bhp (Type 9WR); this gave the Mk II cars a top speed around 77mph. The Mk I and Mk II cars were fitted with a standard Mini four speed gearbox which had synchromesh on the top three gears but not on first. All synchromesh gearboxes were not fitted to the Riley Elf until 1968, two years into the production of the Mk III which also had wind up windows instead of the sliding windows of the Mk I and Mk II. 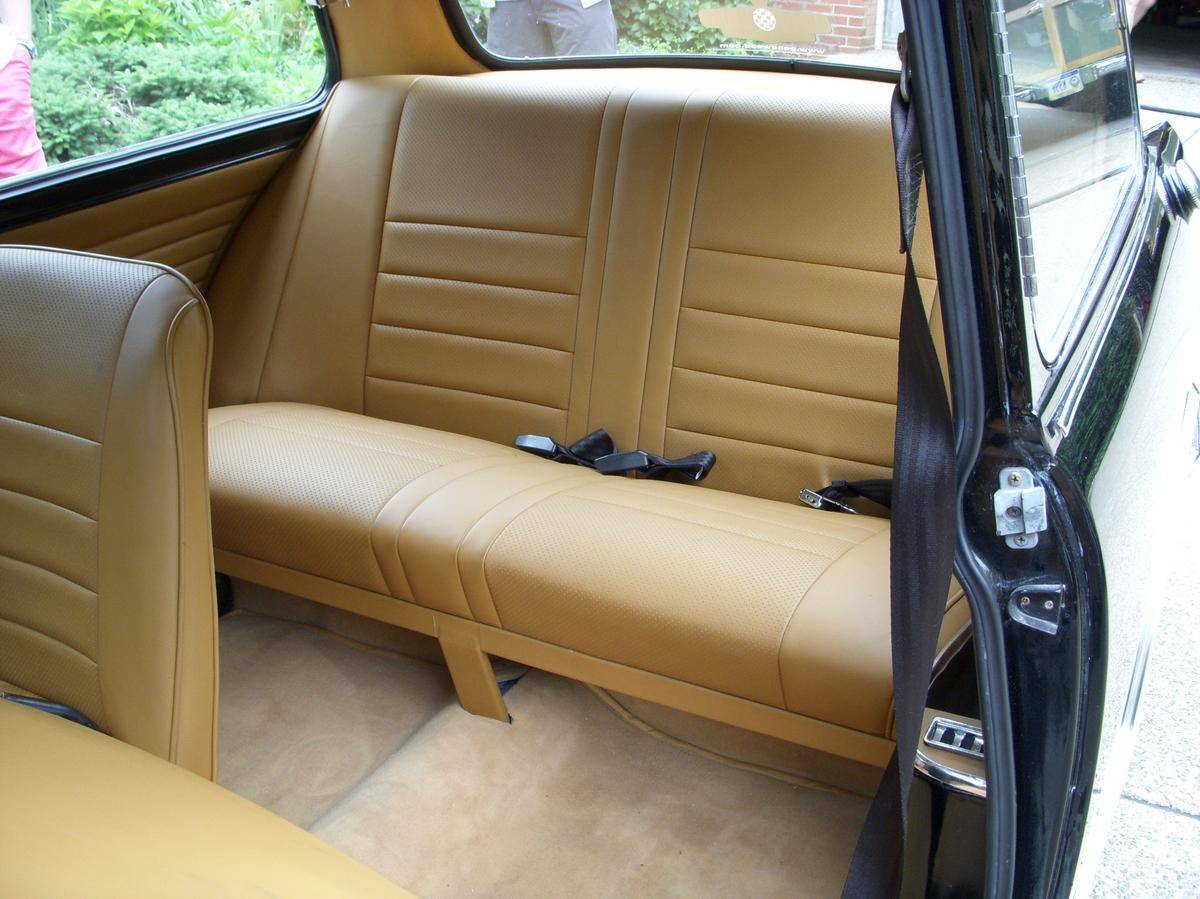 The designer of the Mini, Alec Issigonis, is said not to have liked the extended boot of the Riley Elf being of the opinion that it spoiled the styling. Some agree with him, and others, myself included, feel that the styling of the Riley Elf is an improvement over the stumpy look of the original Mini. The two are simply different takes on a design concept, the Riley Elf having a more sophisticated look and the Mini looking rather more utilitarian and businesslike. 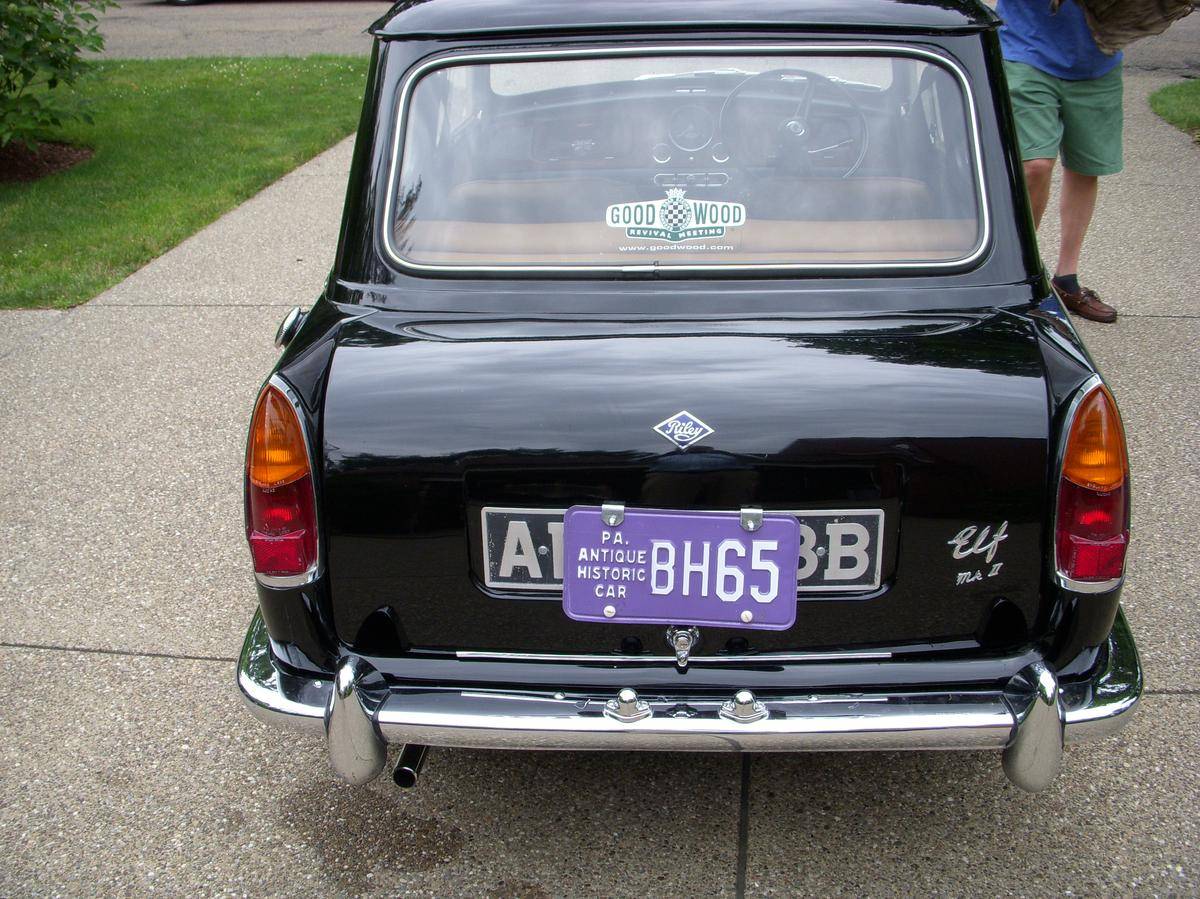 The extended boot of the Riley Elf was not approved of by the designer of the Morris Mini, Alec Issigonis. (Picture courtesy Hemmings).

The black Mk II Riley Elf we have been featuring is up for sale by Hemmings and you will find the sale page for it if you click here.

It looks to be a delightful example of the Riley Elf and very nicely restored.

For those interested in reading more about the Mini and its variants you might like to look at “The Complete Mini: 35 Years of Production History, Model Changes, Performance Data and Specifications (Marques & models)” by Chris Rees. You’ll find it on Amazon if you click here.

There are also original BMC factory workshop manuals which you will find if you click here.

There is quite a selection of books on the Mini and its variants on Amazon which you will find if you click here.

I personally regard the Riley Elf as the best of the Mini variants. They have a character all their own and both look and handle wonderfully with a genuine set of Minilites on them. 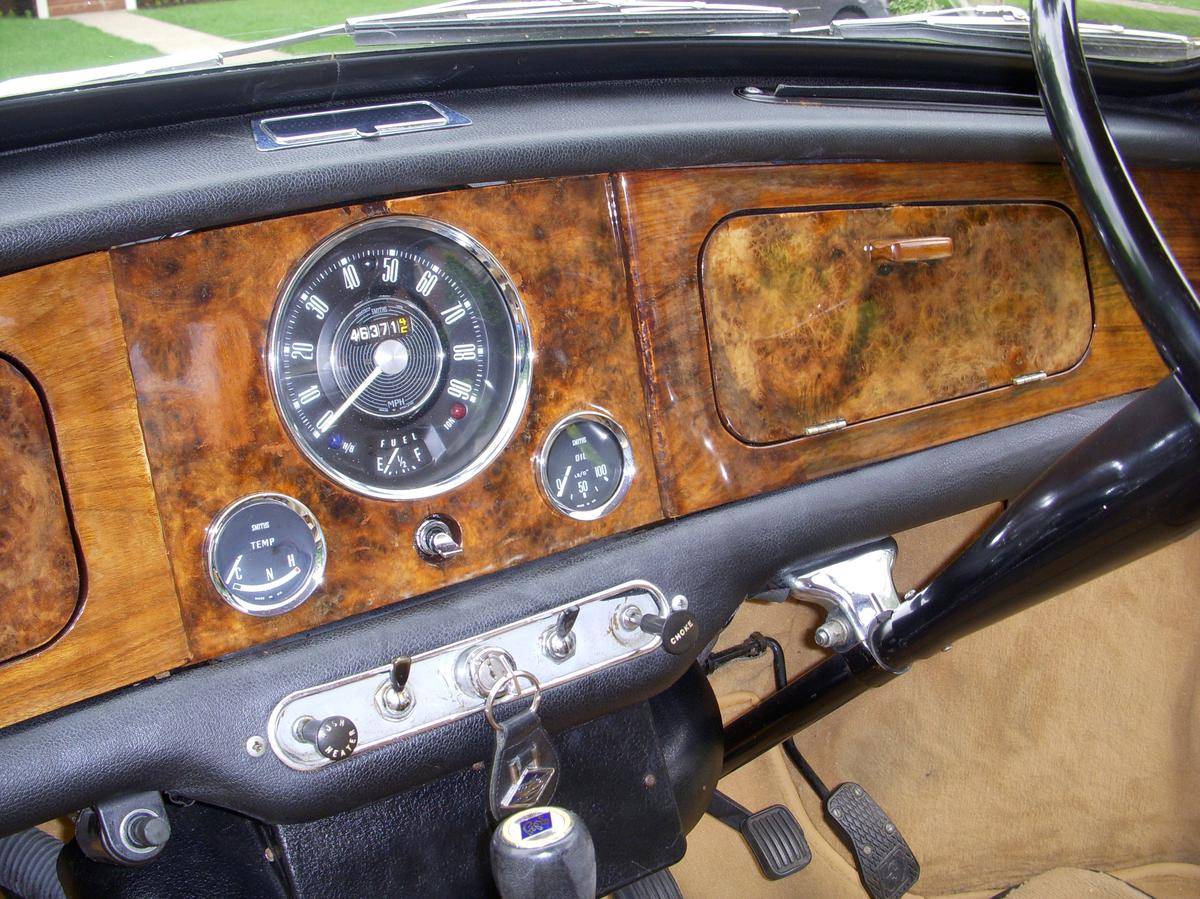