I wonder how it would be for someone in North Korea to openly refuse to do what the “Dear Leader” Kim Jong Un wanted them to do? When we live in a reasonably free country we can tend to lose sight of what it is like to live under a regime that will brook no dissent. Ferdinand Porsche and his son Ferry in the thirties were living under Adolf Hitler’s oppressive Nazi regime and there was no end in sight of that regime. Argument, or refusal to comply with what Hitler wanted would have disastrous consequences, consequences that would at a minimum be financially fatal, and probably personally fatal. My own experiences of both visiting and living and working in a totalitarian political environment were in the People’s Republic of China in the early eighties, and the early nineties. So I have had the chance to see what life is like for people who constantly live in that sort of political and social environment. Thus I for one will not jump into judgement of anyone who has found themselves in a position where they have to cooperate with a totalitarian government because the consequences of refusal are too awful to contemplate.

In 1945 the darkness of the Nazi regime was brought to and end. There was a new dawning, a new era, and the trial that had been that “black hole” called World War II was over. What is more, for the first time the people of the world were made aware of just how abominably awful the events of that war had been. If you have the opportunity visit the Yad Vashem in Jerusalem, visit the Peace Museum in Okinawa, visit the museums that are dedicated to reminding us “Lest we forget” in the hope that we will have learned that lesson of history and will not be condemned to repeat it.

In our feature image at the head of this post is a picture of Ferry Porsche freshly arrived in New York on a brand new Boeing 707. With him are two cars, the Volkswagen which, despite its dark past was destined to become the best selling car in the world, and the Porsche 356 which was based on the technology of the Volkswagen and yet was a new creation, done whilst Ferry’s father Dr. Ferdinand Porsche was imprisoned in a French gaol in Dijon without trial, and required to do design work for Renault to create their Renault 4CV. 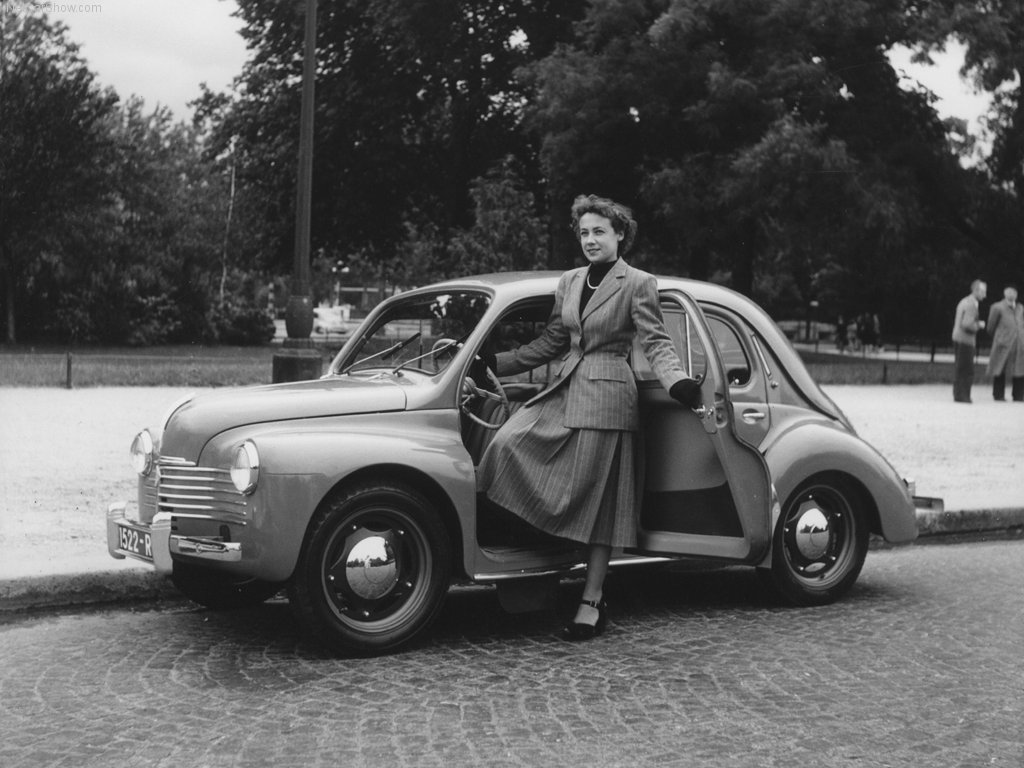 1948 picture of a Renault 4CV which Dr. Ferdinand Porsche had been required to assist in designing. (Picture courtesy netcarshow.com)

After the payment of a very large fine Dr. Ferdinand Porsche was finally released from the prison on 5th August 1947 and returned to live with his son Ferry and family.

Ferry had been busy working on the design for a sports car based on the Volkswagen, with a horizontally opposed mid engine and some parts directly from the Volkswagen, but with a different structure. This was to become the Porsche 356. He had been doing design work for an Italian named Piero Dusio to create the Cisitalia Porsche 360 racing car as a result of Italian car designer Carlo Abarth being a strong advocate for him. This provided the cash that was needed to secure his father’s release from prison.

In the immediate post war years, whilst his father had been in prison, Ferry and other family members had managed to retain the Porsche name and had secured the right to a royalty fee for every Volkswagen sold. They were very much involved with the creation and marketing of the post war Volkswagen cars and also secured the use of the Volkswagen dealer network to sell and service their new series of Porsche sports cars. They also became the sole Volkswagen distributors for Austria.

Production of the Porsche 356 began in 1948, production cars reverted to the Volkswagen style rear engine layout.

It was in this scenario that Ferry Porsche and his family finished up being both involved in the improving of the Volkswagen to make it a car that would take world markets by storm, and at the same time have their own company producing performance cars under the family name. It was in this post war environment that Volkswagen and Porsche headed to the United States to show their cars and see if there would be any buyers. 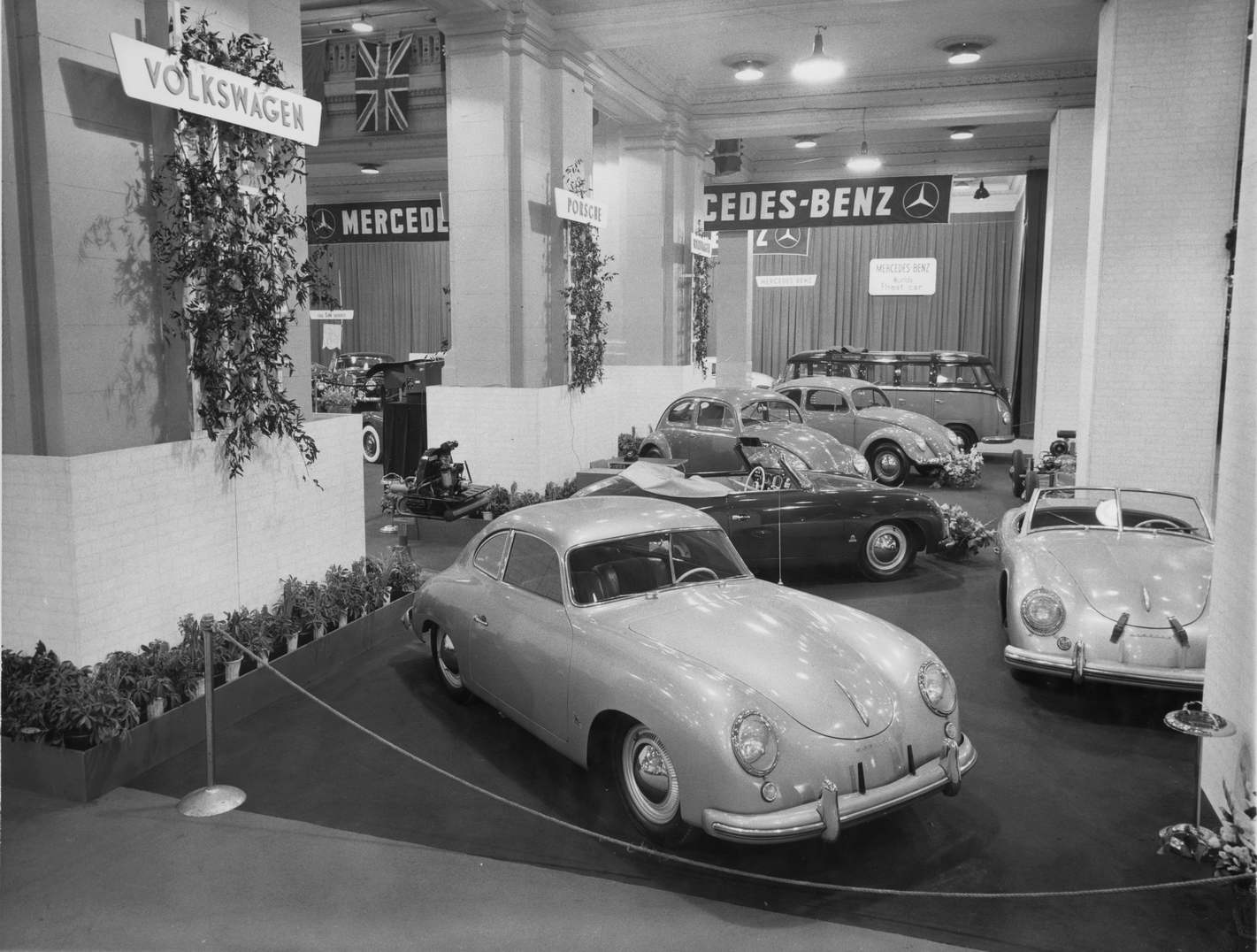 The Volkswagen/Porsche stand at the 1953 International Motor Sports Show in New York Grand Central Palace. Note that the Kombi van has made its appearance. (Picture courtesy flatsixes.com)

The Volkswagen had made it “across the pond” and, little did they know they were on the verge of becoming the world’s most popular car, helped along by their association with a sports car that became an exciting fashion statement, as well as being a fabulous car to drive or just to be seen in – the Porsche 356. 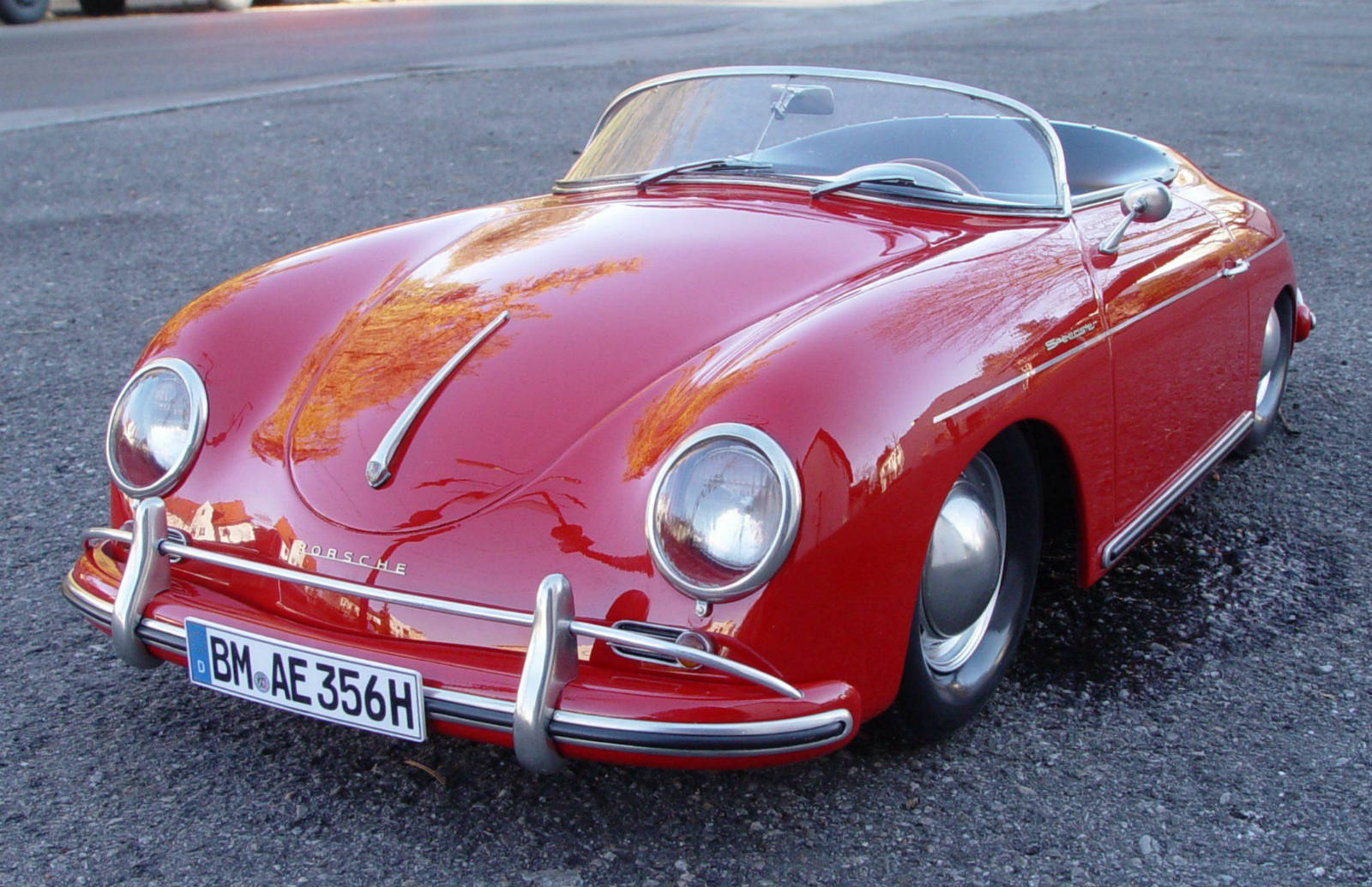 Porsche 356 Speedster, much like James Dean had, whilst Janis Joplin drove a psychedelic 356. (Picture courtesy zillioncars.com)