Dr. Ferdinand Porsche was a creative genius who made his mark in the world of automotive design from the earliest stage of his working career. His doctoral degree was honorary but Ferdinand Porsche was a self educated engineer who managed to get a better education for himself than if he had attended a set university course. He was a pioneer of hybrid automobiles way back in 1900 when he designed the electric Lohner-Porsche and discovered that an all electric car suffered from the weight penalty imposed by the battery packs so he re-designed it as a gasoline engine/electric car using the technology that would later be used for diesel electric locomotives. Not content with that however when Ferdinand Porsche was recruited by the newly amalgamated Daimler-Benz he was set to work to create a conventional but technologically advanced sports car and his creation was the Mercedes-Benz S and its successors the SS, SSK and SSKL, cars that are amongst the most iconic Mercedes-Benz in history. 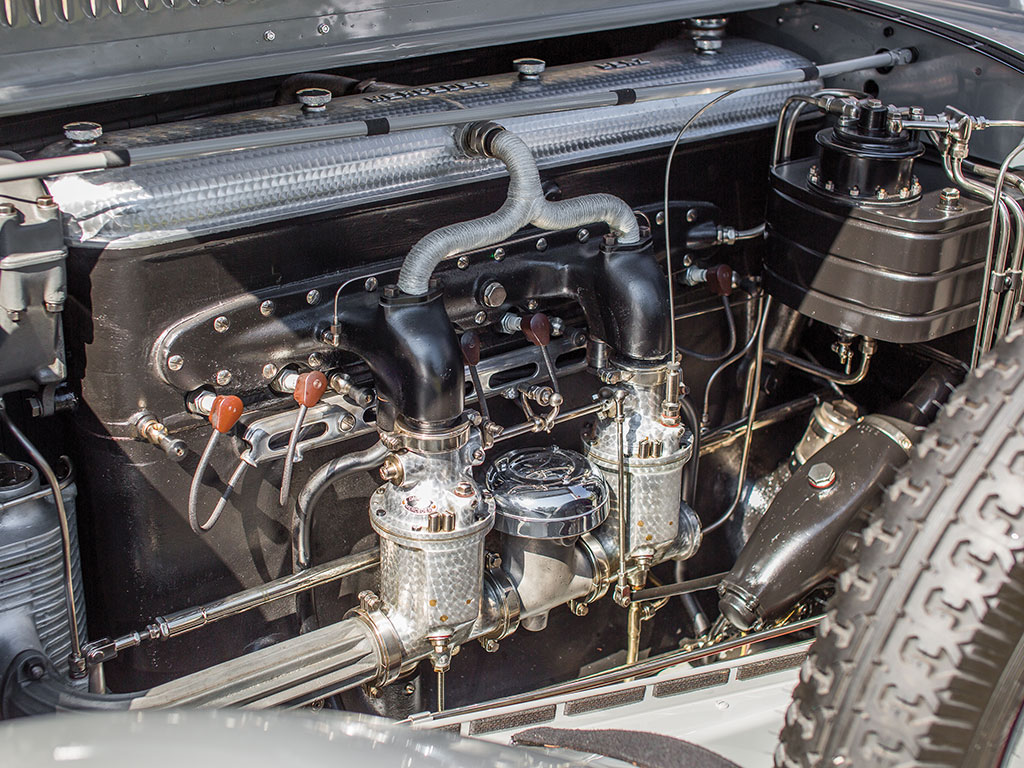 At the heart of the Mercedes Benz 680 S is the 6.8 liter (6,740cc) supercharged in-line SOHC six cylinder engine that began as a 6.3 liter engine and would grow to be a 7.1 liter in the SSK. The Roots type supercharger is partly visible to the left of this picture.

Taking on the design of the Mercedes-Benz S automobiles Ferdinand Porsche took over the legacy left him by Paul Daimler who had been his predecessor as Technical Director and Porsche set about the process of improving on Paul Daimler’s design work. Ferdinand Porsche increased the engine capacity of the 6.3 liter SOHC Daimler in-line six cylinder engine to 6.8 liters (6,740cc), enlarged the valves, and upgraded the Roots type supercharger to provide a 7psi boost to the engine’s aspiration only if the throttle was pressed hard down. This new version of the engine produced 120bhp at 3,000rpm whilst conventionally aspirated or 180bhp with the supercharger working. The supercharger pumped into two pressurized carburettors and the engine featured a dual ignition system with twin spark plugs per cylinder with independent ignition systems. 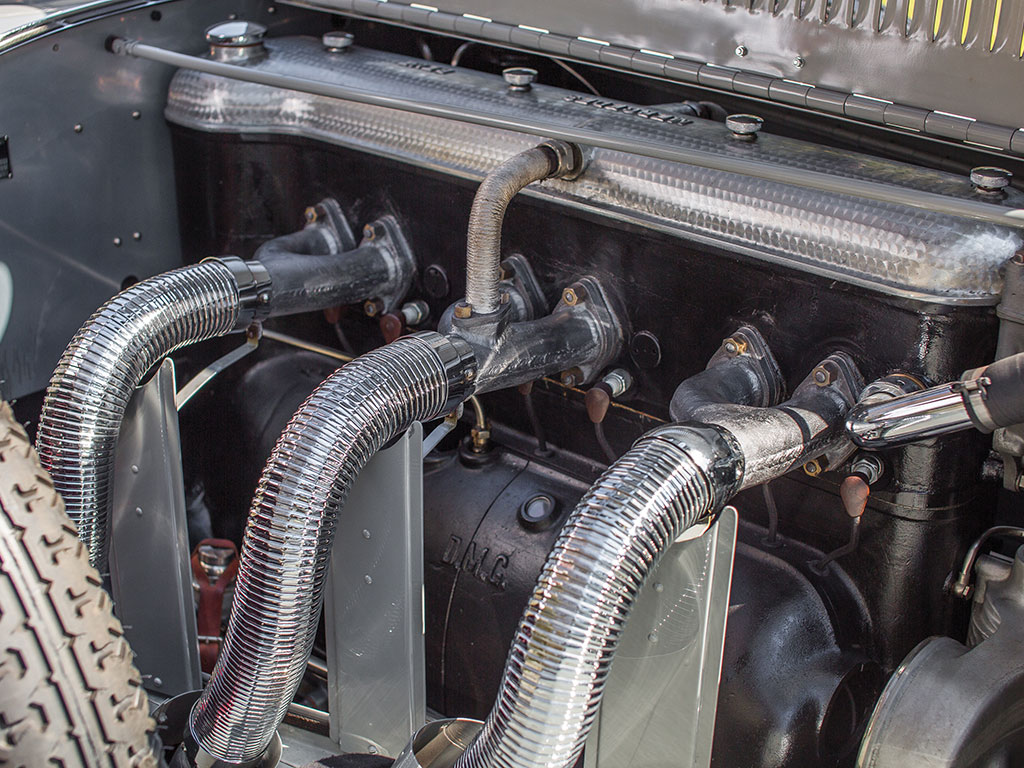 Right side view of the engine showing the two into one exhaust layout and the spark plugs on this side of the engine.

Ferdinand Porsche, assisted by Hans Nibel, and Fritz Nallinger, re-designed the chassis for the new car which became a low slung double dropped chassis with the engine and transmission being made as a unit, and mounted to the chassis so that they became a reinforcing chassis member to optimize chassis stiffness for the most efficient weight. Drive to the rear wheels was by jointed torque tube. The gearbox was a four speed unit. 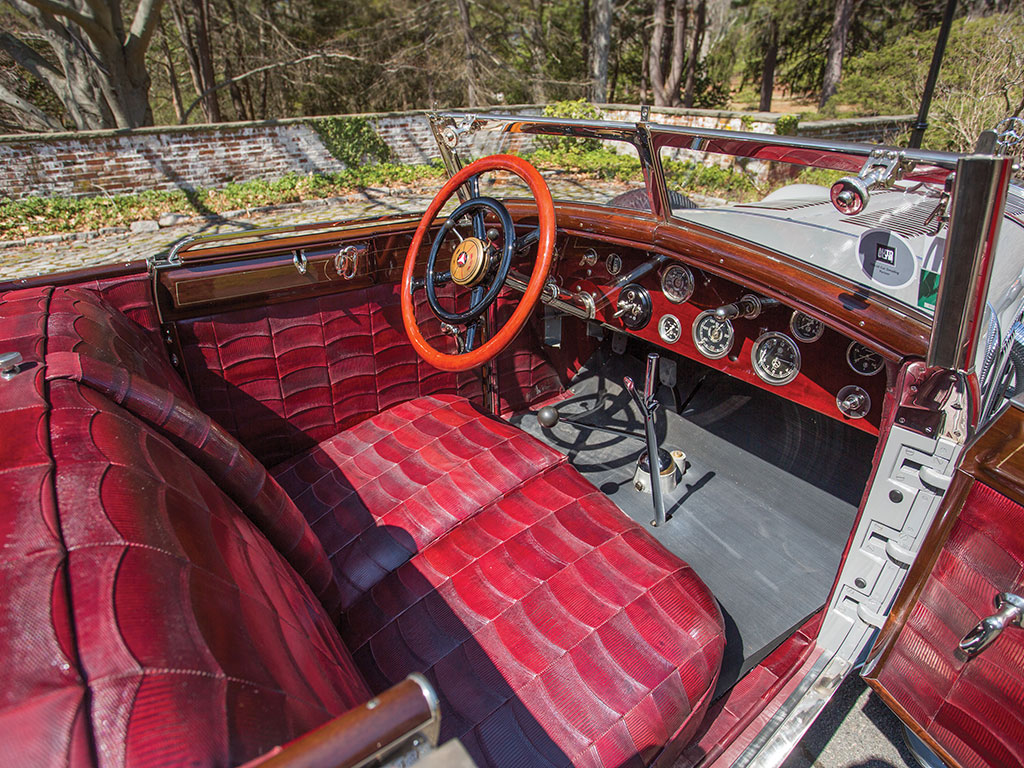 The “control center” of the 680 S. Gear lever and handbrake are conveniently close at hand and the car has an “engineer’s dashboard”. The wood of the dashboard is as exotic as the reptile leather interior being made of Purpleheart timber from the French colonies of South America.

Mercedes-Benz customers could order their car with Sindlefingen coachwork or purchase a rolling chassis to be shipped to the custom coach-builder of their choice. The 1928 Mercedes-Benz 680 S in our pictures was ordered as a rolling chassis and sent to Parisian avant garde coach-builder Carrosserie J. Saoutchik. Saoutchik created a low slung two seater “torpedo” roadster body for this powerful Mercedes to suit its personality, and the interior trim was made as exotic as could be with Alpina genuine reptile leather seats and trim. 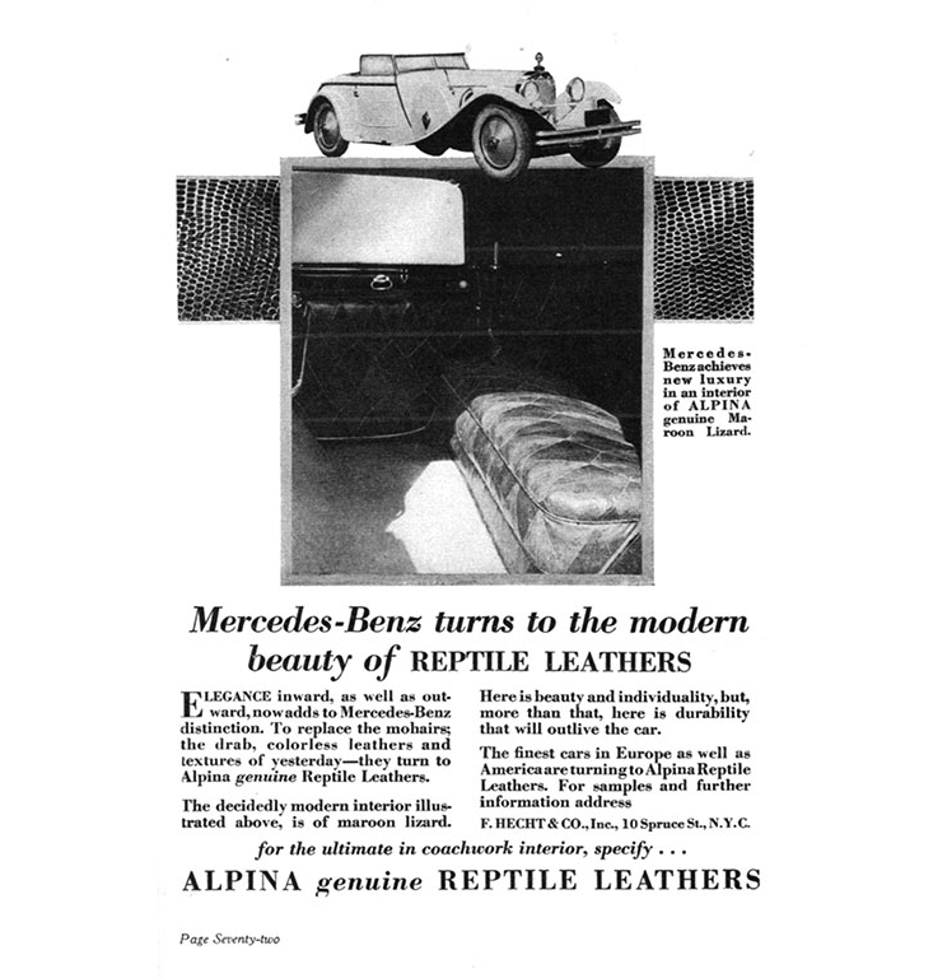 The interior of this Carrosserie J. Saoutchik, of Paris bodywork was trimmed in exotic and high fashion Alpina reptile skin leather. 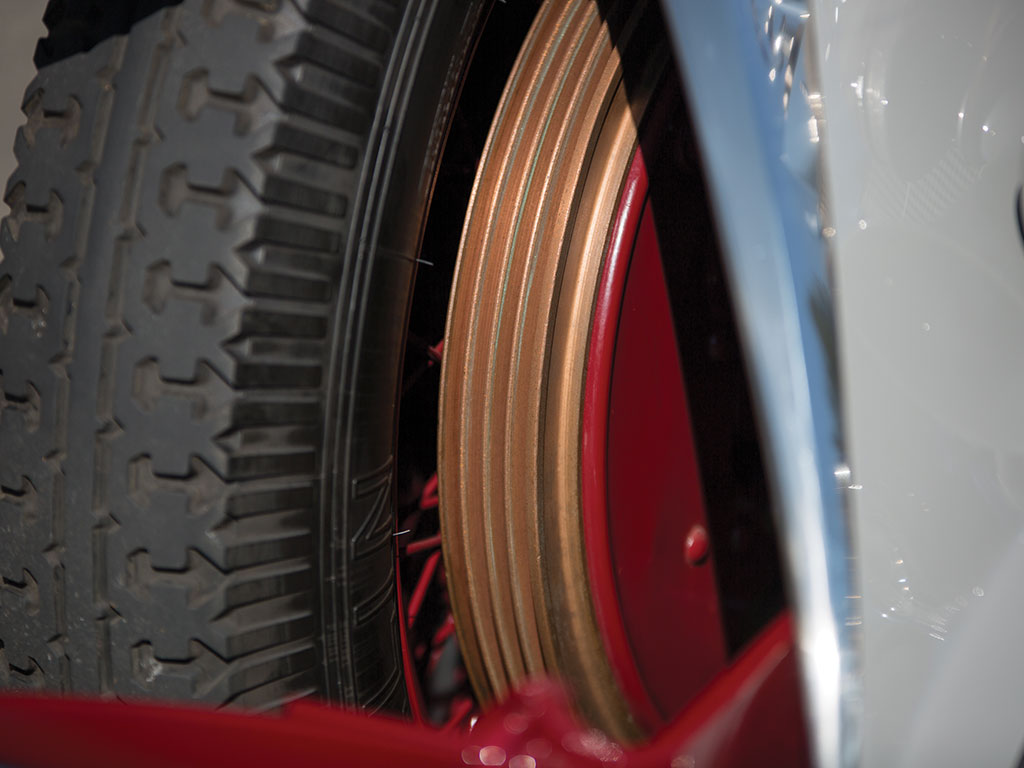 The finned drum brakes are as large as can be installed for the wheel size.

The end result of this design and construction was the building of a sports car that was effectively a racing car with a beautiful custom body and interior; a car whose Jekyll and Hyde personalities coexisted in a nicely balanced combination. 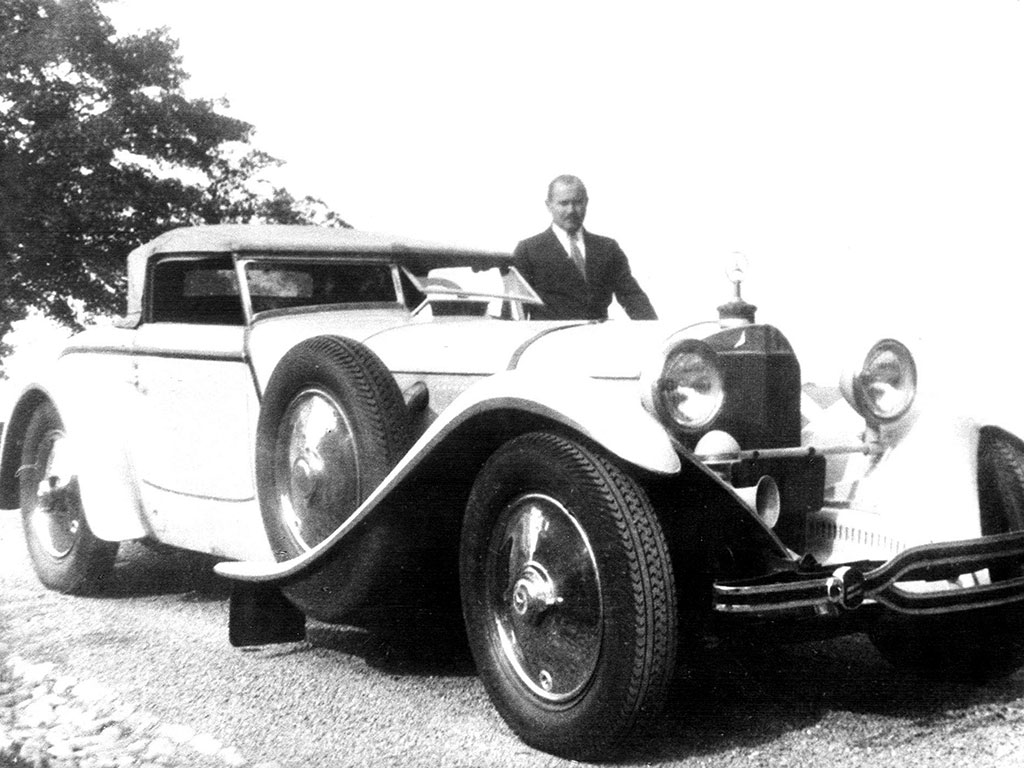 The first owner of this car was Frederick Henry Bedford Jr., who was director of the Standard Oil Company. Note the windscreen panels are hinged so they can be independently opened for real “wind in the face” motoring. This was also a feature used when driving in foggy conditions.

The car’s first owner was Mr. Frederick Henry Bedford Jr. who was director of the Standard Oil Company. A 6.8 liter supercharged Mercedes-Benz S was a thirsty car and driven briskly one would not expect to get better than single digit fuel consumption. So it was just as well Frederick Henry Bedford Jr. had the sort of income not only to afford the big Mercedes but also to keep her happily satiated with gasoline. The 680 S was quite capable of justifying her fondness for fuel by being able to go rather more quickly than most other cars on the road which proved to be instrumental in Frederick Bedford getting married. His future wife had been going out with another gentleman but Frederick was able to steal her away in the big Mercedes and leave her previous beau in the dust. As we said earlier, this car has something of a Jekyll and Hyde personality but in the nicest possible way. 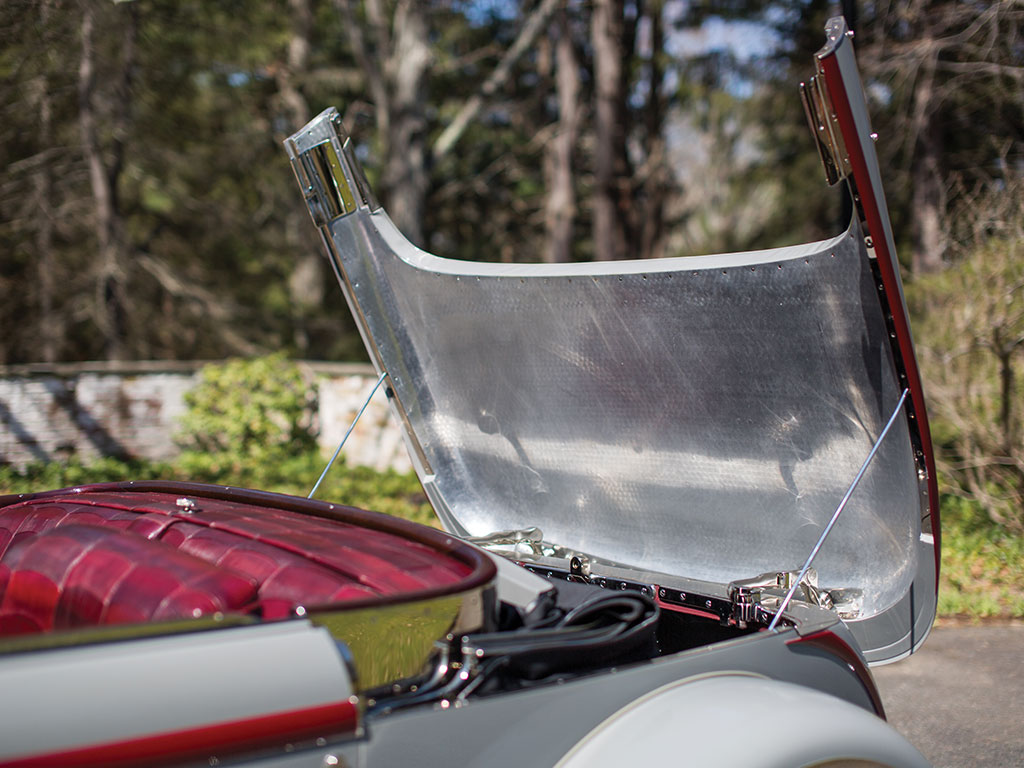 A Saoutchik trademark is his fitting the soft top into a completely flush compartment so that it does not intrude on the body line of the car.

The Mercedes-Benz 680 S with custom coach-work by Saoutchik of Paris is an outstanding example of Ferdinand Porsche’s work during his time with Daimler-Benz before he started his own company. It is a car that combines a design heritage of some of the greatest names in automotive history including not only Dr. Porsche but also Paul Daimler, Hanz Nibel and Fritz Nallinger not to mention Jakob Saoutchik. This beautifully restored and highly original car is coming up for auction by RM Sotheby’s at their Villa Erba sale to be held on May 27th, 2017 at Villa Erba, Lake Como, Italy, and will be held in partnership with the Concorso d’Eleganza Villa d’Este.

You will find the sale page for this car with further information concerning its providence and history if you click here.

This is a car that has a history of being much appreciated by its past owners. No doubt it will prove to be a source of just as much pleasure for its new owners. 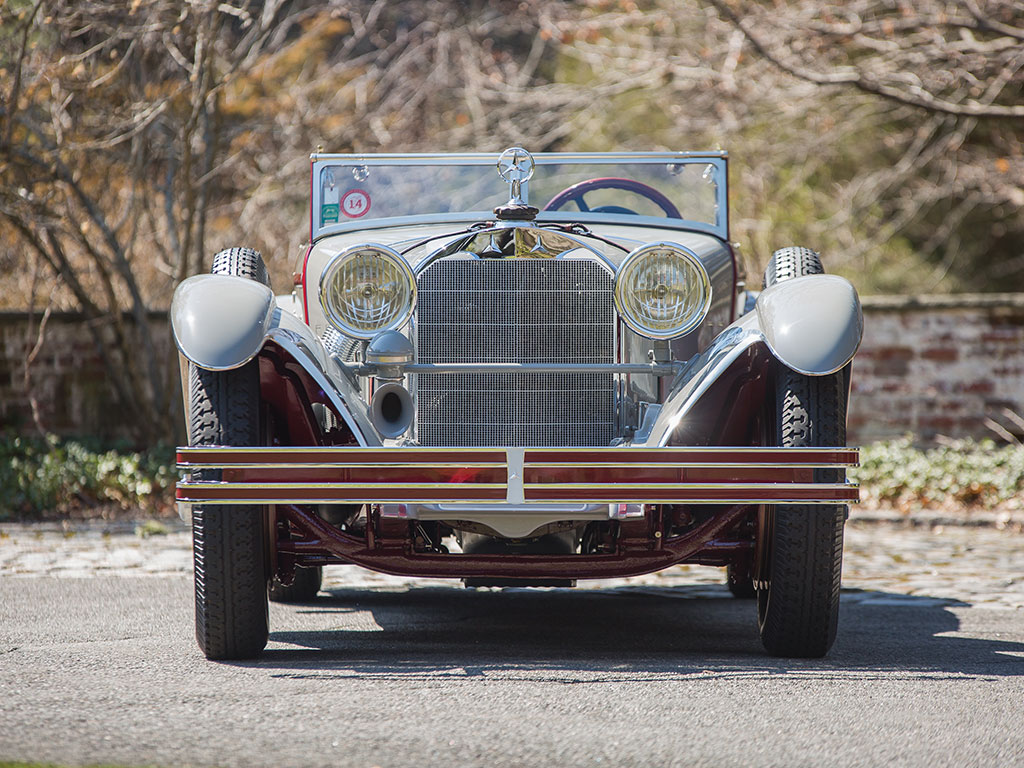