I don’t know about you but I’d much rather go shooting than fishing, primarily because shooting involves guns and fishing normally doesn’t: at least it doesn’t unless you’re going big-game fishing with a Greener Harpoon Gun, in which case the fishing becomes a whole lot more interesting.

A well used Greener Martini Harpoon Gun. This looks to be a Mark I model. The cable spool fits to the front of the fore-end and is secured by the thumb-screw, making the gun look like a crossbow. A harpoon is fitted over the barrel and attached to the line. To fire the harpoon gun a specially designed .38 Special blank cartridge is chambered and when fired propels the harpoon towards its target.

Famous British gun-maker W.W. Greener (Author of “The Gun and its Development“) made a number of harpoon gun designs beginning with muzzle-loading black powder types: but his small and portable Light Model harpoon gun was based on the familiar Martini action as used for the British military rifle of the time, the Martini-Henry. This enabled him to create a quite small and portable harpoon gun for taking large fish such as tuna. The standard line supplied with the gun was of 400lb breaking strain, but line up to 1,200lb breaking strain was available. So this light harpoon gun is intended for spearfishing large fish, not for “Moby Dick” Captain Ahab and the “great white whale” expeditions.

Sporter version of the Martini-Henry rifle chambered for the military 577/450 cartridge. The Martini action is an excellent basis for the creation of light sporting rifles and can be used for modern nitro cartridges with only a modest amount of modification. In addition to the 577/450 black powder chambering many of these rifles were converted to .303 British becoming the Martini-Enfield.

(Note: You will find the sale page for the above rifle if you click here).

The Martini action was simple, reliable, and relatively quick to reload. The Martini-Henry first entered British military service in 1871 and was to prove itself in Britain’s colonial wars, such as the Zulu wars, and was also adopted by the Ottoman Empire amongst others. Another advantage of the Martini action is that it is quite easy to strip down and maintain. This action was made in a number of versions developed from the rifle and one of these was the Greener GP shotgun.

Greener GP shotgun. These were made in 12 gauge as a “general purpose” inexpensive gun. (Picture courtesy Tony Morris Guns).

(Note: You can find the above pictured gun for sale by Tony Morris Guns in the UK if you click here).

So for British gun-maker and designer WW Greener the plentiful and inexpensive Martini action was the obvious choice for his light harpoon gun, and the version used for the shotgun was deemed to be the best choice. The Greener Light harpoon gun was not intended to operate at high pressures: the cartridge used to propel the harpoon was a purpose loaded .38 Special blank.

We can see the Greener Light harpoon gun in action in the amateur video below with thanks to olsoneo87 on YouTube.

As you can see from the video the Greener Light harpoon gun provides a spearfishing with a bang experience and I’m sure I could get much more interested in fishing if allowed to take one of those along.

The Greener Light harpoon gun was stated to be effective at a range of up to thirty yards, at which distance it would group into an eight inch circle. So, like all spear-guns and arms designed to work in water, the range and accuracy are limited, but still practical.

The Greener Martini harpoon gun in this picture is a Mark II model.

The two Greener Martini light harpoon guns featured are coming up for sale by Rock Island Auction in their February 2018 sale.

You will find the sale page for the chromed model if you click here.

You will find the sale page for the blued Mark II model if you click here.

These harpoon guns look like they’d make fishing so much fun that they should still be in production. And of course once we’ve enjoyed our long day’s shoot, when the harpoon gun is safely put away, it would be time to break out the rum and cigars in proper nautical fashion. Speaking of rum, my favorite is Lemon Hart, what’s yours? 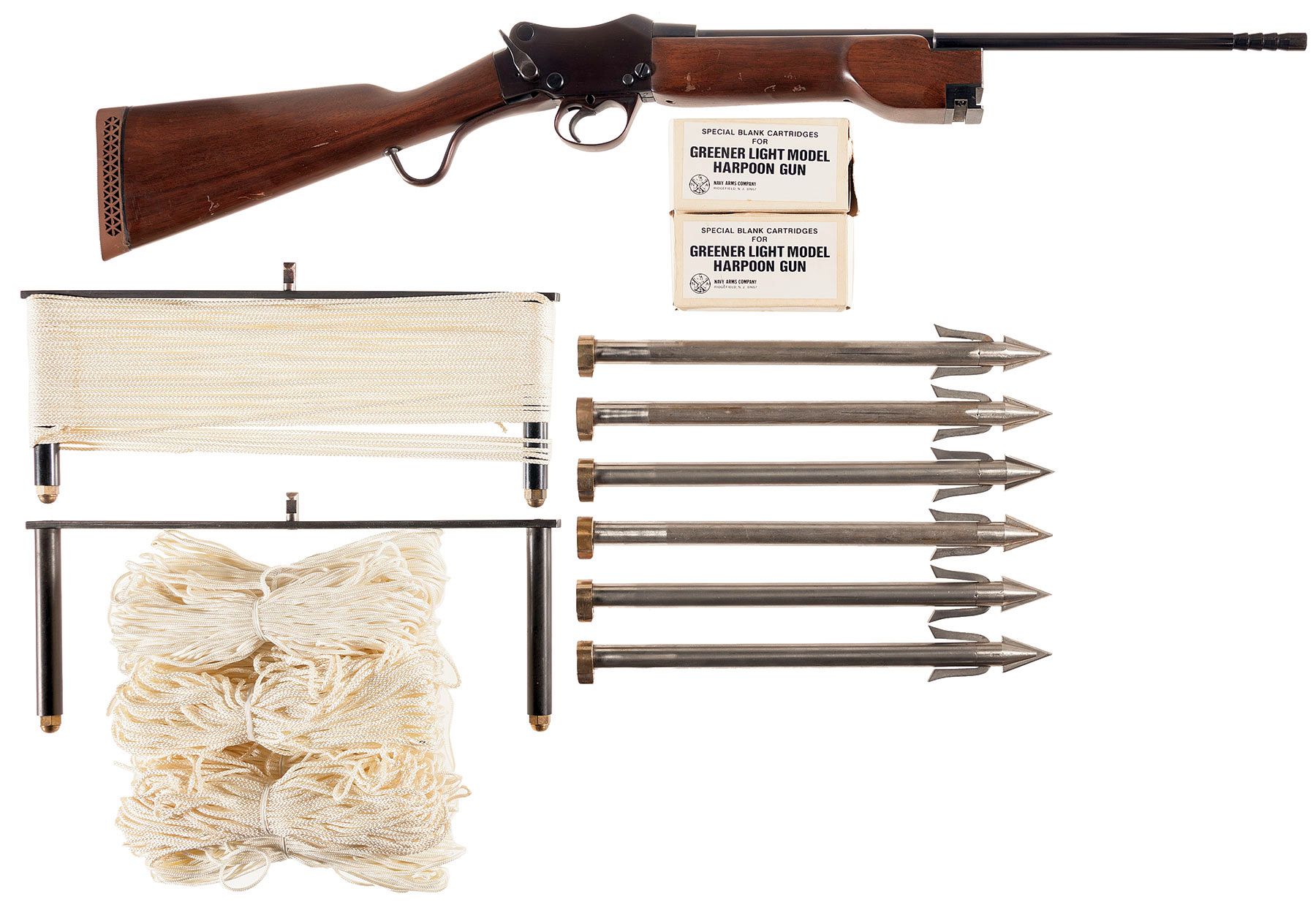