Singer were and still are world famous for their sewing machines, manufactured at their US plant at Elizabeth, New Jersey. But as the Second World War loomed in 1939 the US Government was already looking for companies that could manufacture arms for a possible involvement in the impending war in Europe. The US was by no means actively planning to get involved in the war to stop Hitler at that point. There were those in positions of power, both in Britain and the United States, who were sympathetic to Germany’s National Socialist Government: including members of both the British aristocracy and the United States ruling elite. (For a perspective on this and much more Thomas E. Ricks “Churchill and Orwell: The Fight for Freedom”  is highly recommended. You will discover many other insights in this book, for example, that George Orwell had a great deal of trouble finding a publisher brave enough to publish “Animal Farm”: and when it was finally published Orwell purchased a pistol – just in case unfriendly people came looking for him.)

(Note: You will find the original print above for sale at Barry Lawrence Ruderman’s Rare Maps).

Although many think of the Singer factory as being just a sewing machine factory the US Government were able to think outside the box and realize that a sewing machine is a quite complex and precision made machine: arguably more complex than a pistol. So a sewing machine factory, complete with its highly trained workforce, was an ideal candidate to convert into handgun manufacture. Not only that, but if the US were to become involved in a war then the presence of a significant number of highly skilled women in the plant would be an especial advantage as they would not be conscripted into the military. As an aside, my own mother was in London during the Second World War and was employed at the Royal Small Arms Factory, Enfield Lock, making Bren Guns. She was found to have a high level of fine motor skills and was assigned to using a milling machine to make breech blocks. Prior to the war she had been working in a garment factory using sewing machines.

The US Ordnance Department first approached Singer in 1925 to find out if they could manufacture quality M1911 pistols in quantity. An engineering study was conducted and by the end of it Singer had demonstrated that not only could they produce 25,000 pistols per month, but their pistols were the equal of those being turned out by Colt.

So it was in 1939, as British Prime Minister Neville Chamberlain realized he had been deceived by Hitler, and was forced to declare war on Germany, that the US Government approached the Singer Sewing Machine Company with a pistol manufacturing project they wanted them to try. Singer were already involved in bomb sight and gyroscope manufacture as well as sewing machines, so the government asked them to do a production study to work out most efficient production methods, and standardized raw material supplies. On April 17th the following year, 1940, the year of the Battle of Britain, the Ordnance Department under educational order W-ORD-396 commissioned Singer to make 500 M1911A1 pistols with the goal of being able to turn out 100 pistols per hour.

The inspection marks on a genuine Singer manufactured pistol of this group are a “JKC” on the left side of the frame at the top left of the grip panel (see photo of the left side above). “JKC” stands for John K. Clement, who was the US Army inspector of ordnance for the district where the Singer factory was located. Also just below the magazine release button on the left side of the frame will be a “P”. A “P” will also be found on the slide just ahead of the rear sight. If you hold the pistol muzzle up this “P” should appear upside down.

The grips for the Singer M1911A1 pistols were made by Keyes-Fibre Co.. These grips do not have a reinforcing web inside, no mold number, and no reinforcing rings around the screw holes.

The Singer M1911A1 in our pictures is a professionally re-finished example coming up for sale by Rock Island Auction on February 16th, 2018. 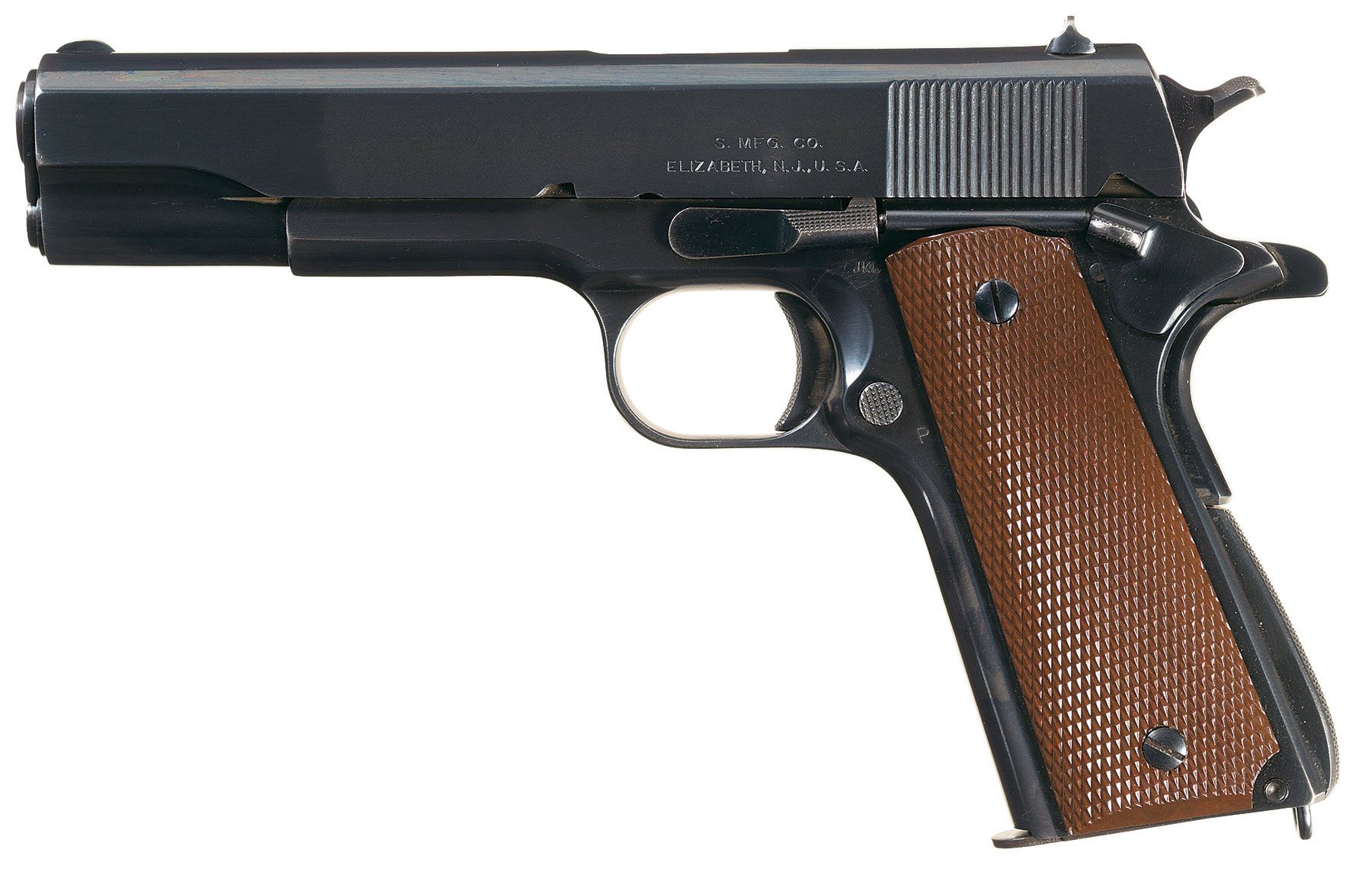 The Singer M1911A1 is sometimes referred to as the “Holy Grail” for M1911 collectors and that is probably accurate, despite the fact that there are a very small number of M1911’s that are even more rare, and thus almost impossible to find.

Singer were not required to make M1911A1 pistols for the war effort. The tooling and documentation were given to Remington Rand and the Ithaca Gun Company. The fate of the Singer pistols made for employees is a mystery, being unmarked they would be difficult to verify unless the provenance could be convincingly proved. But if you’ve got a M1911A1 laying in a drawer somewhere you might just want to check out the markings on it. It could turn out to be a bit like a lottery win.

For the buyer of one of these pistols you must be very circumspect of anything offered to you as one of these rare handguns. They are not difficult to fake. Before shelling out a whole lot of shekels a potential purchase needs to be checked by someone knowledgeable about these guns.