Woodleigh bullets have established a strong reputation world wide for their big game and dangerous game bullets but the company is far more diverse than that as they make excellent bullets for smaller calibers as well, in fact many of Woodleigh’s customers nowadays are deer shooters. But Woodleigh are a company that grew out of a man’s fascination with big game hunting and the double and magazine rifles used. 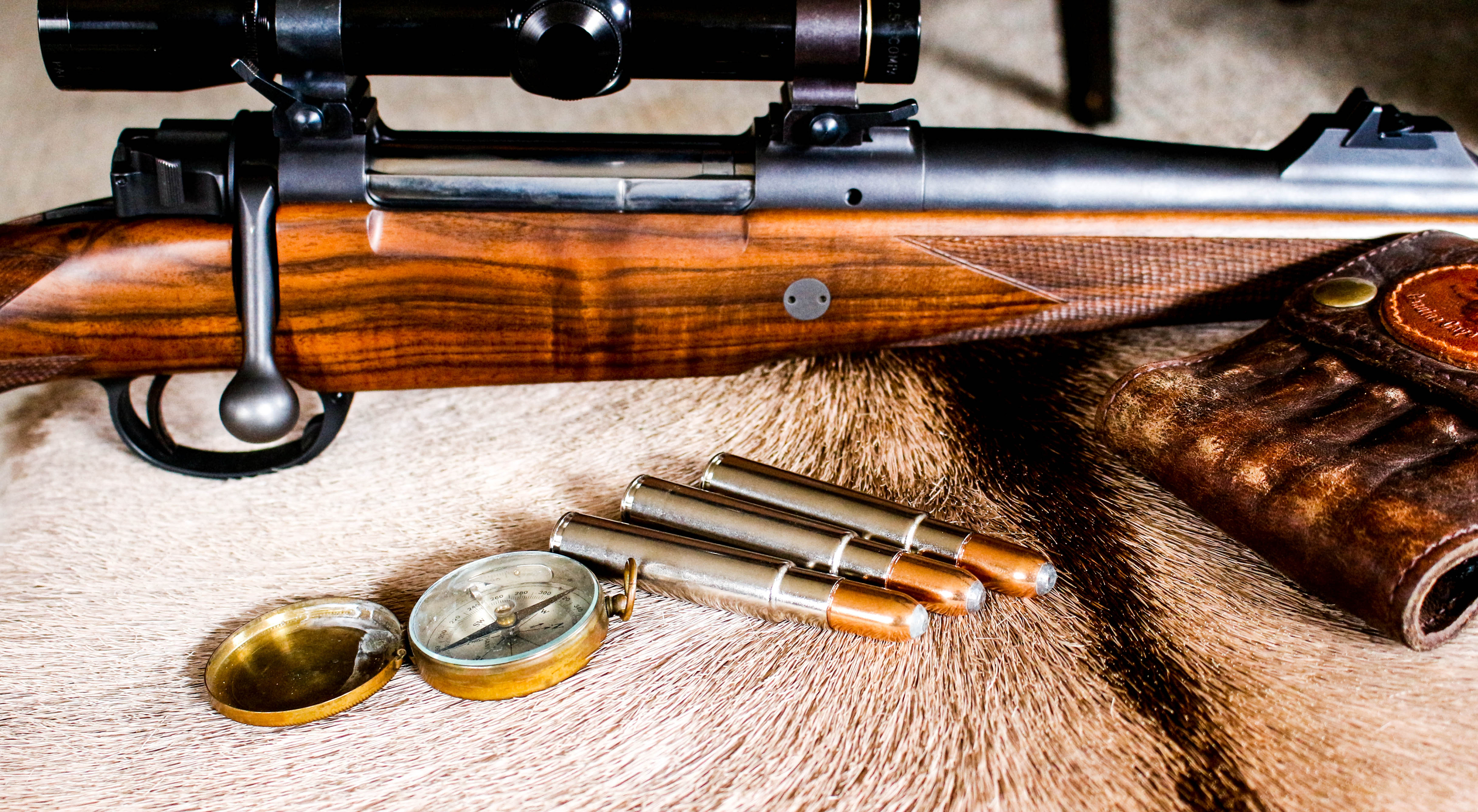 Woodleigh Bullets are most commonly associated with dangerous game ammunition such as this Norma PH in .450 Rigby. (Picture courtesy safariammo.net).

Geoff McDonald began shooting on his parent’s farm as a child and as he grew up he became interested in British double rifles and in hunting Asian buffalo in Australia’s Northern Territory. As he trained in metalworking he soon began turning his hand to cartridge design creating the .530 Woodleigh Magnum and built a rifle for it based around a 1912 manufactured Steyr Mauser 98 action which he modified to accommodate the new cartridge and for which he made his own barrel and created his own soft nosed 750gn bullet.

Geoff McDonald tells his own story on the Woodleigh website and you’ll find it if you click here. 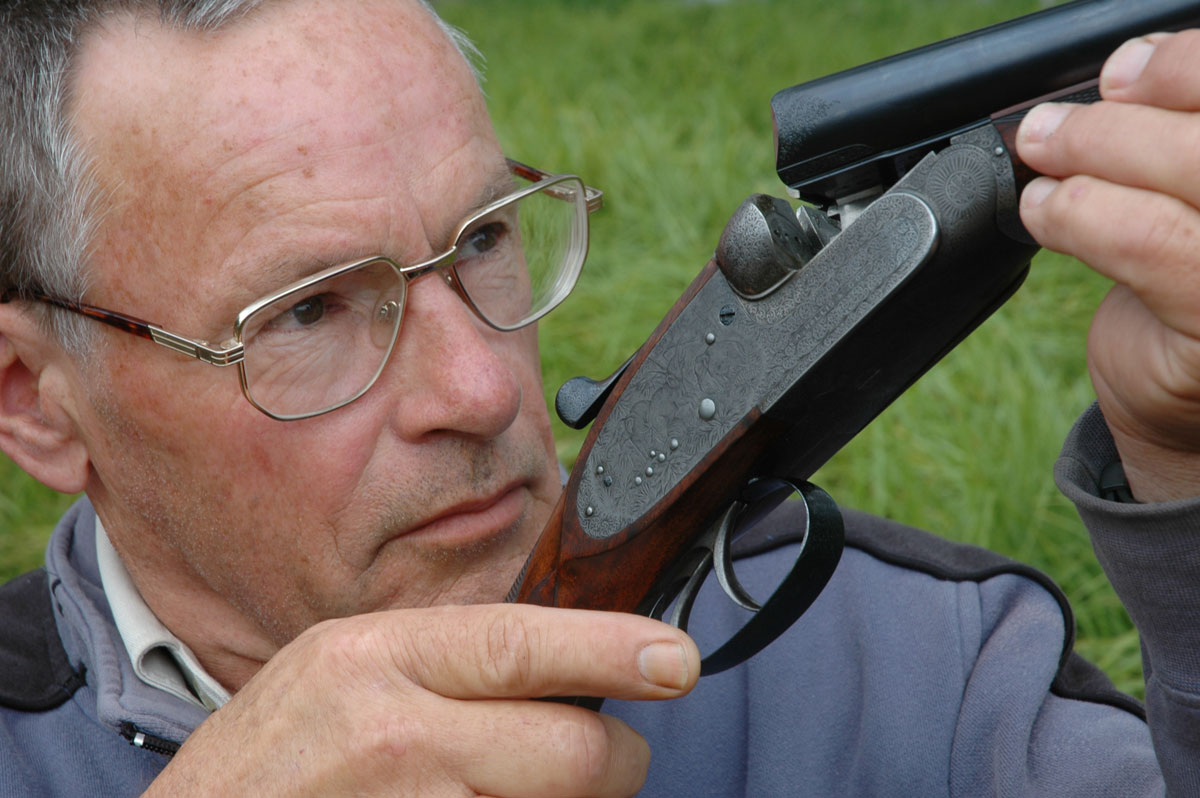 It was because of Geoff McDonald’s passion for classic and antique big game rifles that he got into the business of bullet making in the first place and so the bullets he began creating were for big game rifles for which neither ammunition nor bullets were being made any more. This remains true even today, so for example if you are looking for bullets to get your .318 or .425 Westley Richards shooting then Woodleigh Bullets is the place to go looking. Got a .333 Jeffrey that needs bullets or a .465 Nitro Express? Woodleigh make the bullets you are looking for.

Not content with this however Woodleigh Bullets also make premium bullets in common calibers that are used for deer and antelope hunting also. Woodleigh bullets not only make bullets of the right size but also specify the impact velocity range that a bullet will perform best at. 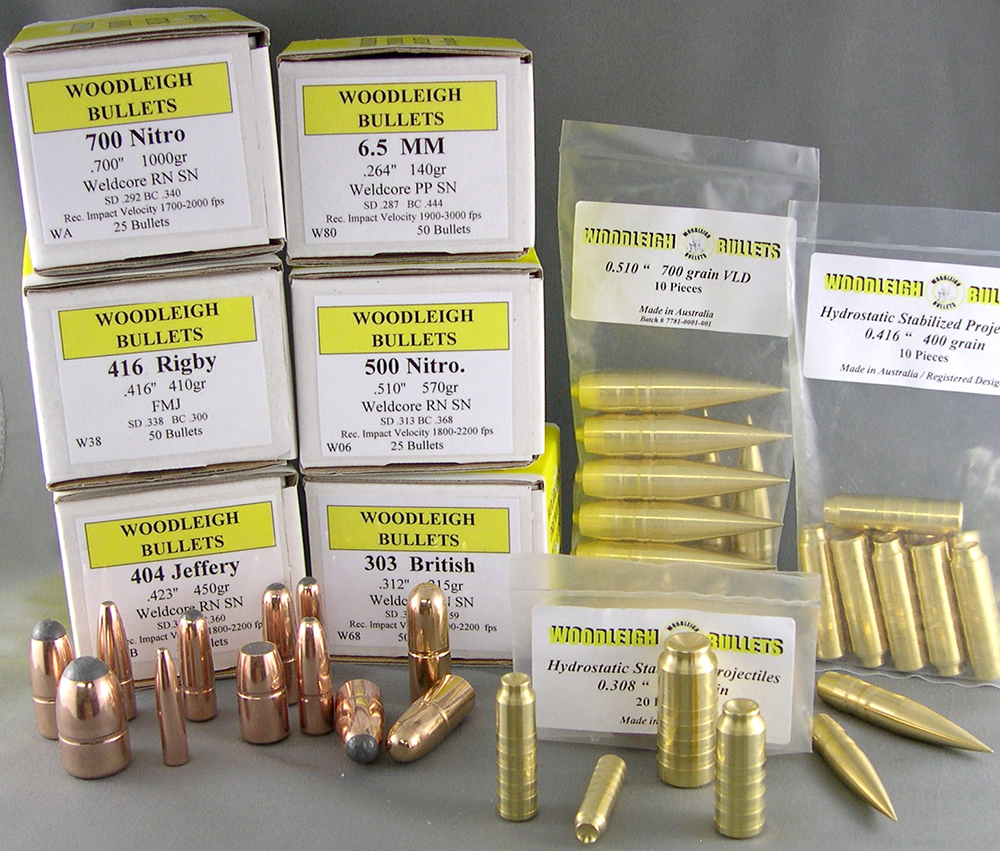 Woodleigh Bullets not only make projectiles in hard to get big game calibers but also make some of the best bullets available for common smaller calibers such as those used for deer and antelope hunting. (Picture courtesy huntingdons.com).

As an example of Woodleigh Bullets tailoring the projectile to the caliber lets look at some .308″ bullets and the Woodleigh recommendations for them. 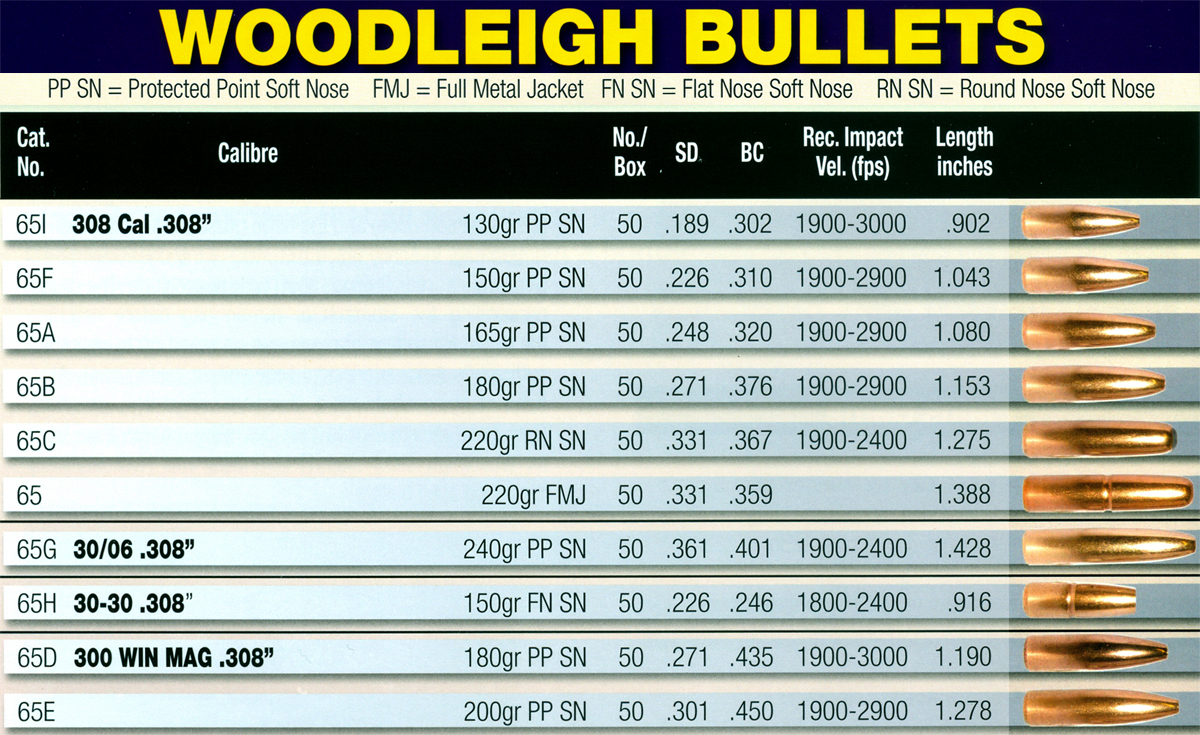 As can be seen from this Woodleigh Bullets data sheet .308″ bullets are specifically designed for the type of caliber they are going to be used in be it the 30-30, .308 Winchester and 30-06 standard calibers, or one of the .300 Magnums such as the .300 Winchester Magnum or similar. (Data picture courtesy Woodleigh and huntingdons.com).

Woodleigh Bullets are made in five styles to suit the sporting application you intend them for. 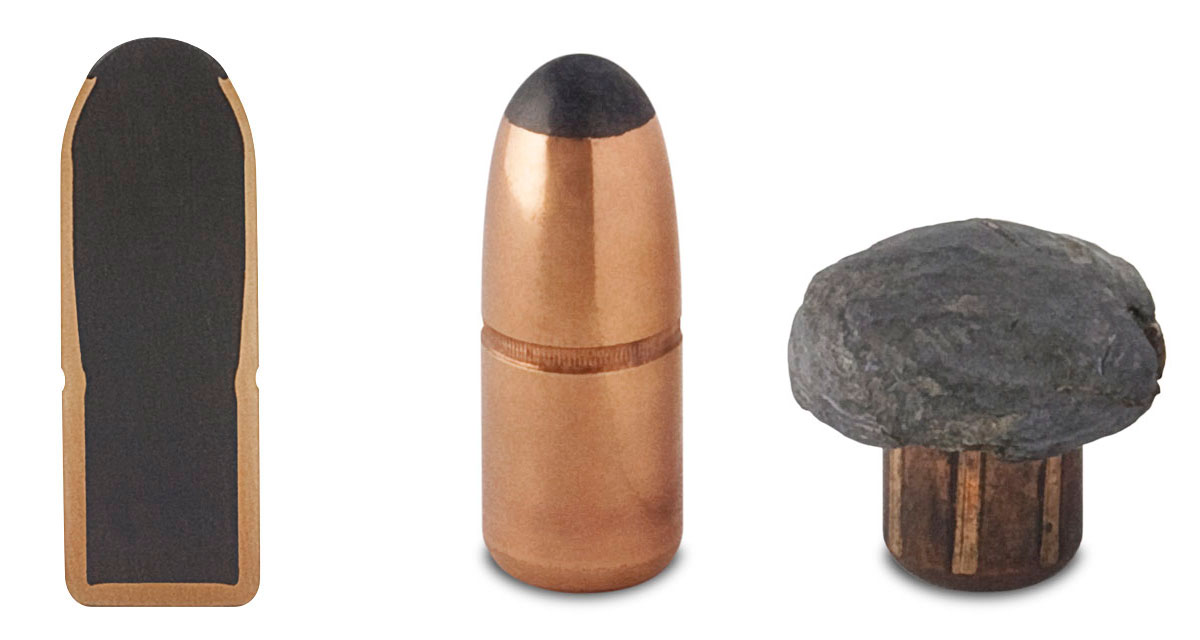 Woodleigh Weldcore soft point bullets use Weldcore technology to bond the lead core to the bullet jacket. jackets are designed to optimize mushrooming yet hold together and penetrate fully. (Picture courtesy Woodleigh Bullets).

The Woodleigh Weldcore Soft Nose bullets are made in round nose design and are available in .264″ and then calibers from .308″ on up to .700″ for the .700 Nitro Express including the hard to get calibers such as the .468″ for the .465 Nitro Express and the Westley Richards .318 and .425. These bullets are made with lead cores bonded to jackets that are 90% copper and 10% zinc guilding metal alloy. Internally the bullet jackets are profiled to ensure optimum mushroom performance and weight retention. The bullets intended for use in traditional double rifle calibers are made to duplicate both the weight and profile of the original Kynoch bullets for each caliber to simplify regulation in double rifles.

You will find the page about Woodleigh Weldcore Soft Nose Bullets if you click here. 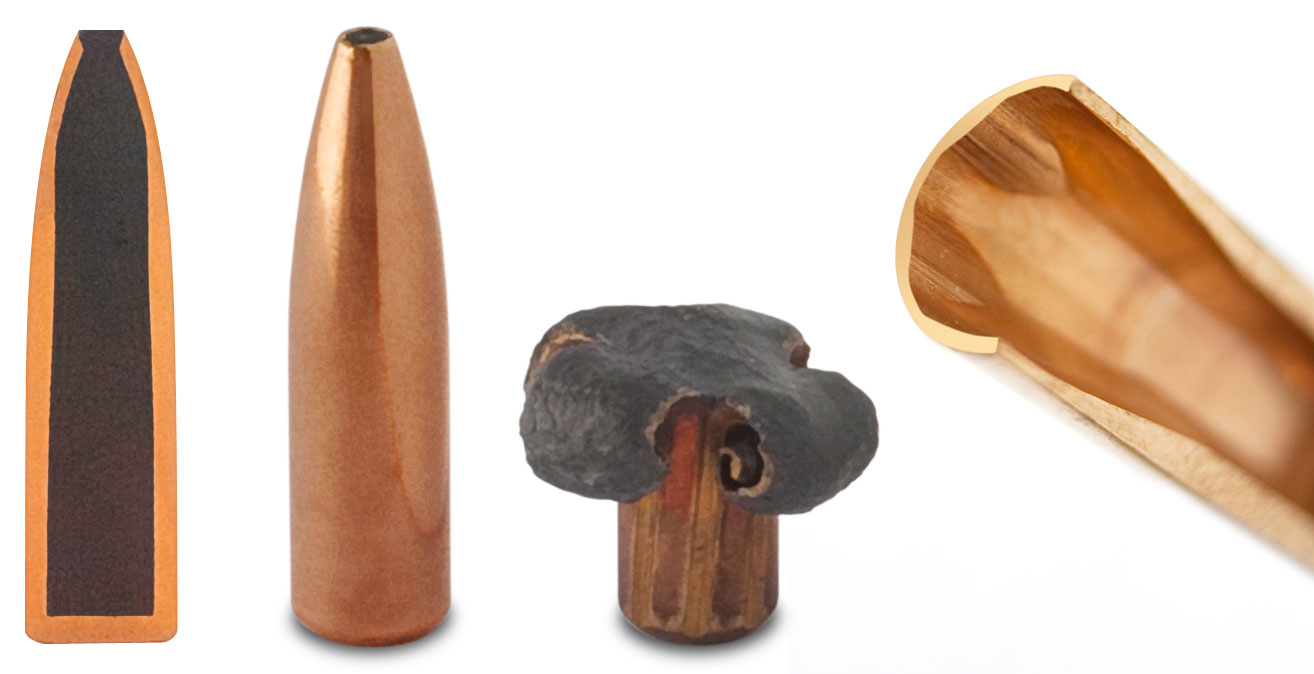 You will find the page about Woodleigh Protected Point bullets if you click here. 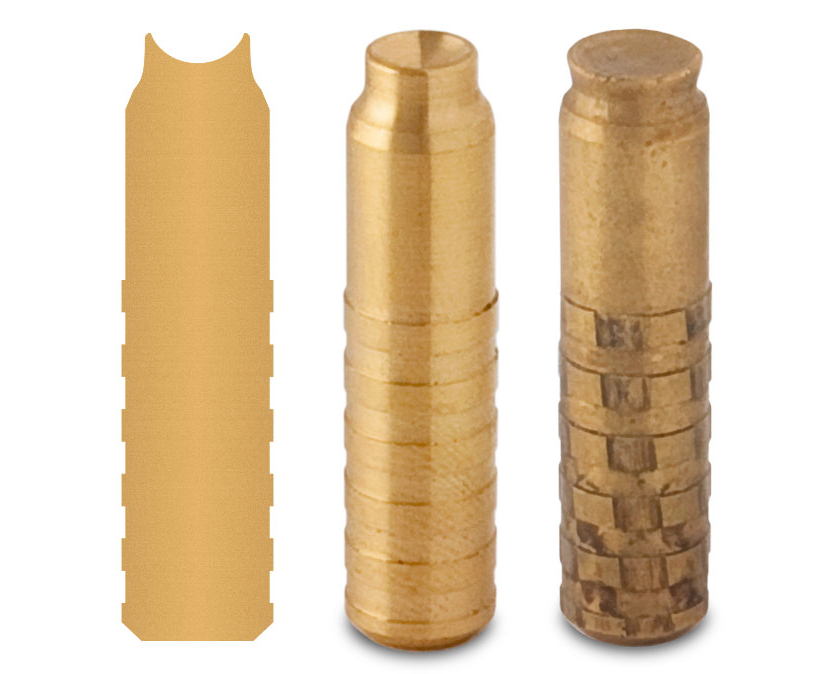 The Woodleigh Hydrostatically Stabilized bullets are intended to bridge the gap between traditional expanding bullets and modern monolithic solids. These bullets use the same hydrostatic stabilization technology that has been used in the brass extrusion industry for many years and which, when applied to a rifle bullet, is intended to ensure the bullet maintains a straight path as it penetrates the animal and is not prone to deflection. Because they use hydrostatic forces these bullets also deliver tremendous shock power which when combined with their penetrating power is intended to ensure a quick humane kill.

These Woodleigh Hydrostatically Stabilized bullets are available in calibers from 7mm up to .577″

You will find the page on Woodleigh Hydrostatically Stabilized bullets if you click here. 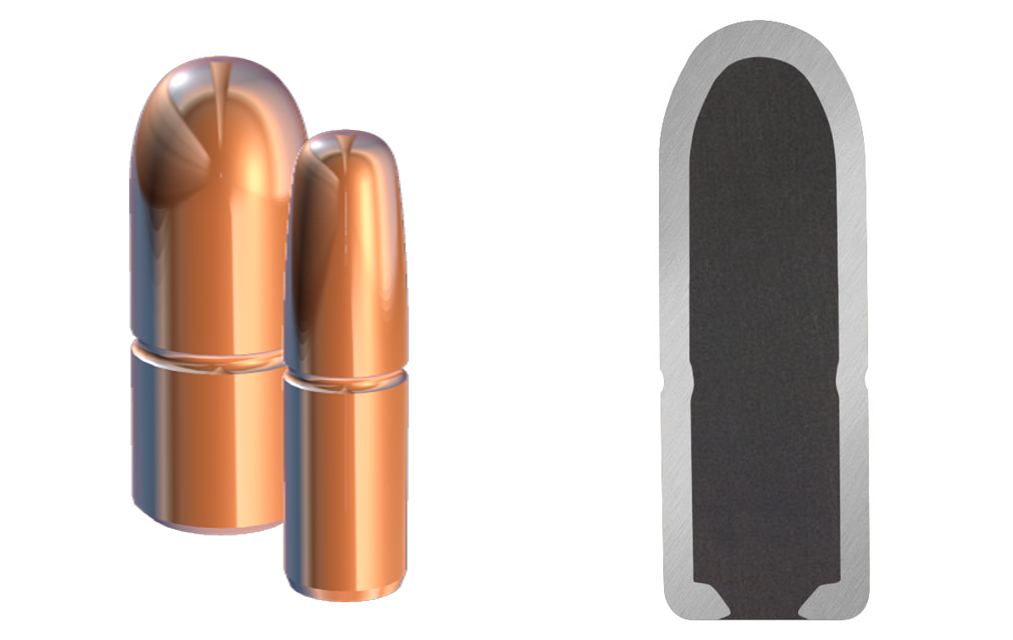 Woodleigh Full Metal Jacket bullets are made to the original Kynoch dimensions and feature a bullet jacket that is 0.084″ at the nose. (Picture courtesy Woodleigh Bullets).

The Woodleigh Bullets Full Metal Jacket bullets are made to the same dimensions and weight as their Kynoch counterparts to ensure ease of regulation in double rifles. These bullets have a front jacket thickness of 0.084″ and have the 90% copper 10% zinc guilding metal jacket rolled back 90° at the bullet heel to ensure against core loss on impact.

You will find the page on the Woodleigh Full Metal Jacket Bullets if you click here. 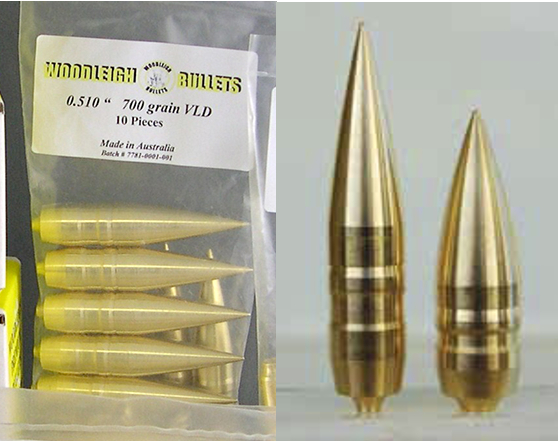 You will find the information page on these bullets if you click here.

Woodleigh Bullets are a manufacturer who really care about hunting, and the classic rifles used for hunting; this has made them the “go to” people for top quality bullets for dangerous and non-dangerous game not only for common calibers but for the calibers that are no longer made and are impossible to find elsewhere.

You can purchase the Woodleigh Bullets Loading Manual, their book “Shooting the British Double Rifle (3rd Edition)“, and “Paradox (the story of Col. V.G. Fosberry, Holland & Holland, and the Paradox)” directly from Woodleigh,  if you click here.

You will find “Shooting the British Double Rifle (3rd Edition)” by Graham Wright on Amazon if you click here.

You will find “Paradox (the story of Col. V.G. Fosberry, Holland & Holland, and the Paradox)” by David J. Baker and Roger E. Lake on Amazon if you click here.

Woodleigh bullets have a very high reputation and their bullets feature in a number of premium commercial ammunition loadings such as Norma PH. For the reloader/hunter these are some of the best bullets you can choose to use. 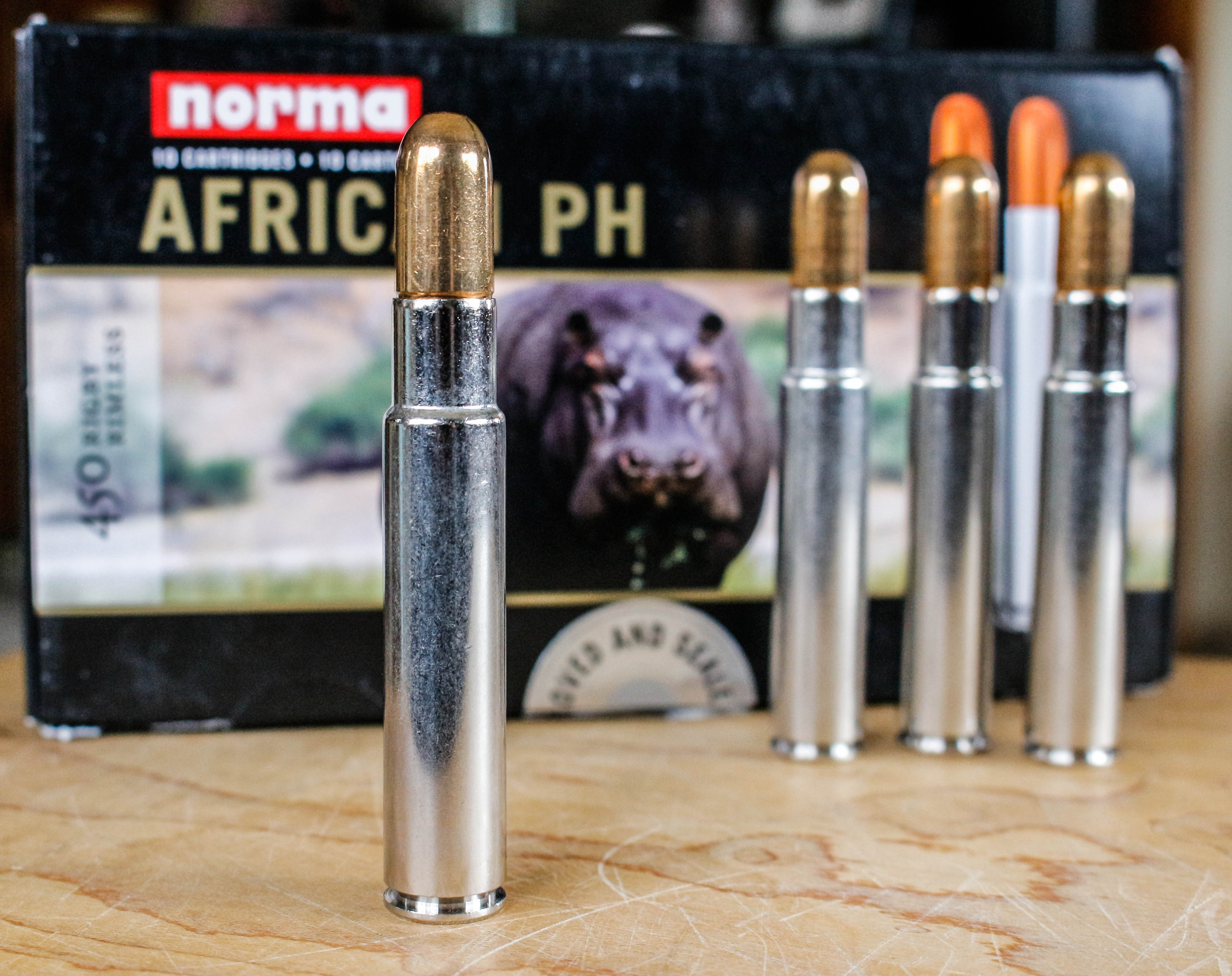