Those of us with grey hair likely still remember that the number “486” was used for an Intel CPU chip that preceded the Pentium. For the Beretta 486 Parallelo however this does not mean that the shotgun had a computer chip in it but that it celebrates 486 years of Beretta making guns. Back in the 1500’s the guns would have been matchlock muskets such as those that later made their way to Japan and revolutionized warfare there, but nowadays Beretta make some of the most desirable production guns be they pistol, rifle or shotgun. 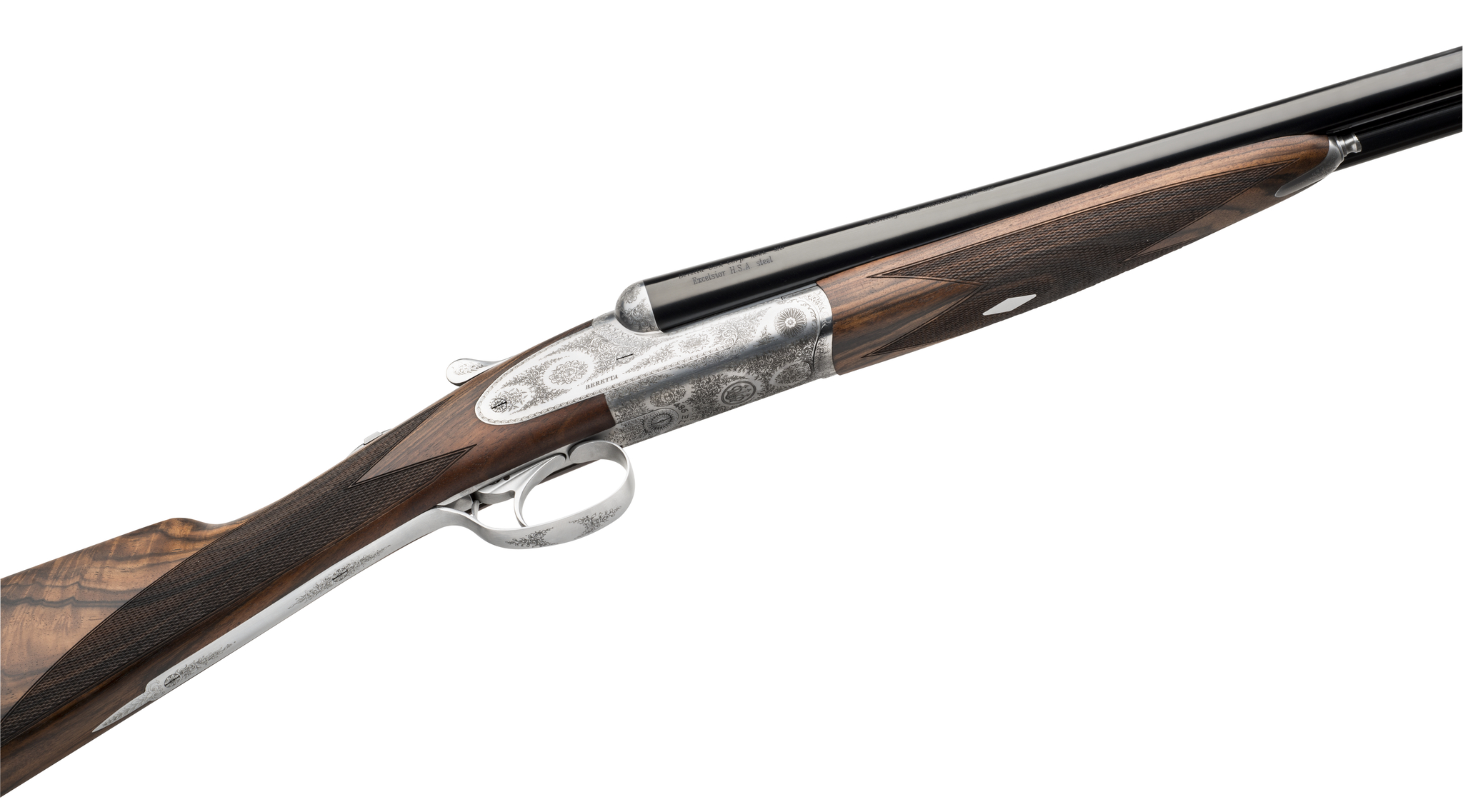 The Beretta 486 Parallelo is a true round action made in the tradition of the famous Edinburgh gun-makers, such as James MacNaughten.

First introduced in 2012 the Beretta 486 Parallelo caused quite a stir amongst the shooting press in Europe where its delightful handling and simply gorgeous aesthetics made it a gun that people tend to be attracted to quickly. The slim rounded action imparts a lightness and thus liveliness to the gun so that it comes to the shoulder naturally and swings through the target instinctively. These are characteristics that some Edinburgh gun-makers such as James MacNaughten were famous for imparting into their round action guns and rifles. (You will find a Revivaler post on a James MacNaughten round action double rifle if you click here). 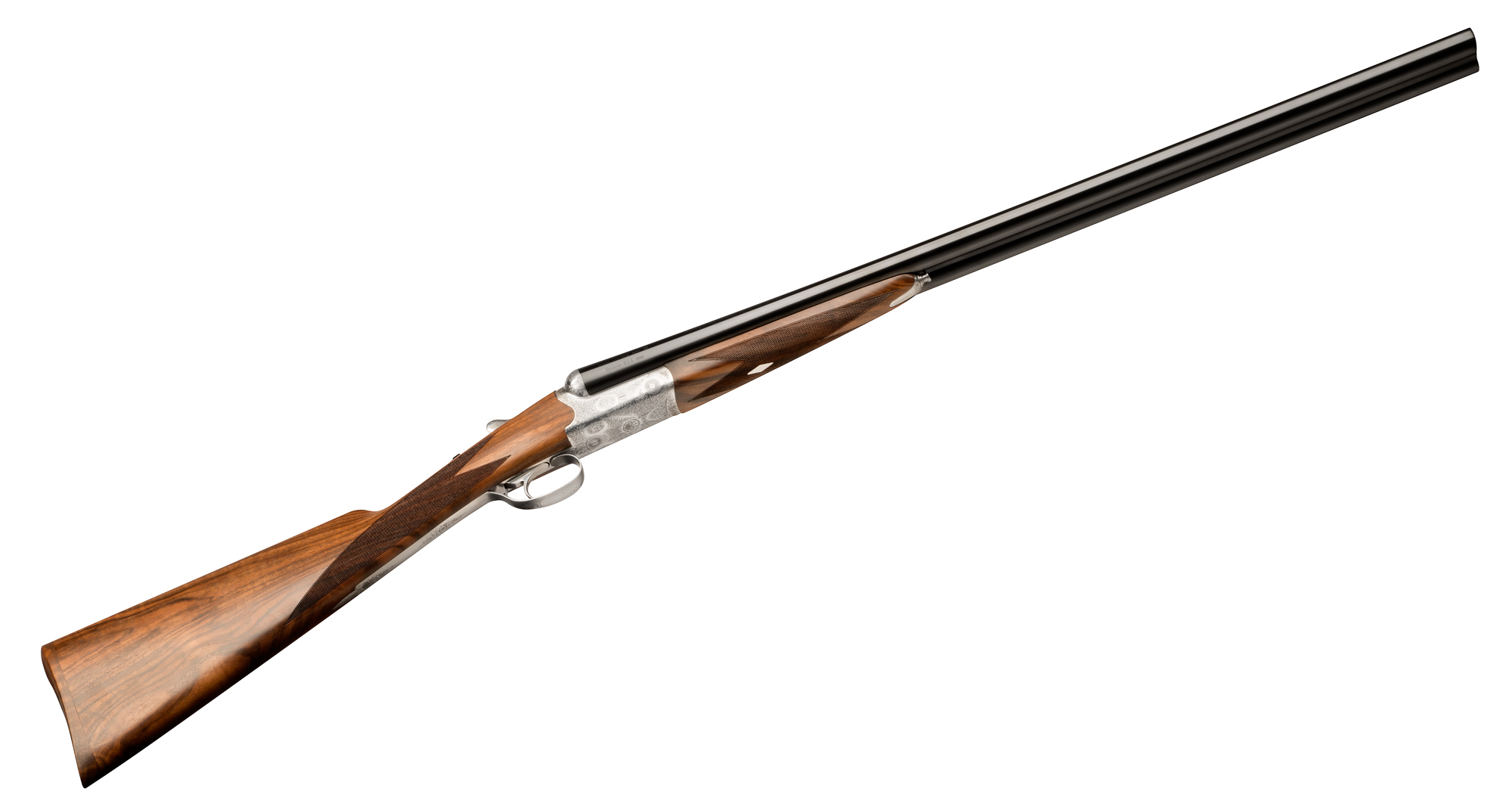 The round action not only gives the gun a graceful appearance but it also contributes to its lively handling and point-ability.

Just as James MacNaughten’s round action guns were famous for having their trigger and hammer mechanism in one assembly mounted on the trigger so Beretta have wisely done the same with the 486 Parallelo. The butt stock is mounted onto the action by sliding it forward until it is fully home and then it is fastened by a through stock bolt. With the trigger and hammers assembly mounted on the trigger all component parts are mounted firmly on metal with no need to attach lock work to the wood of the stock. 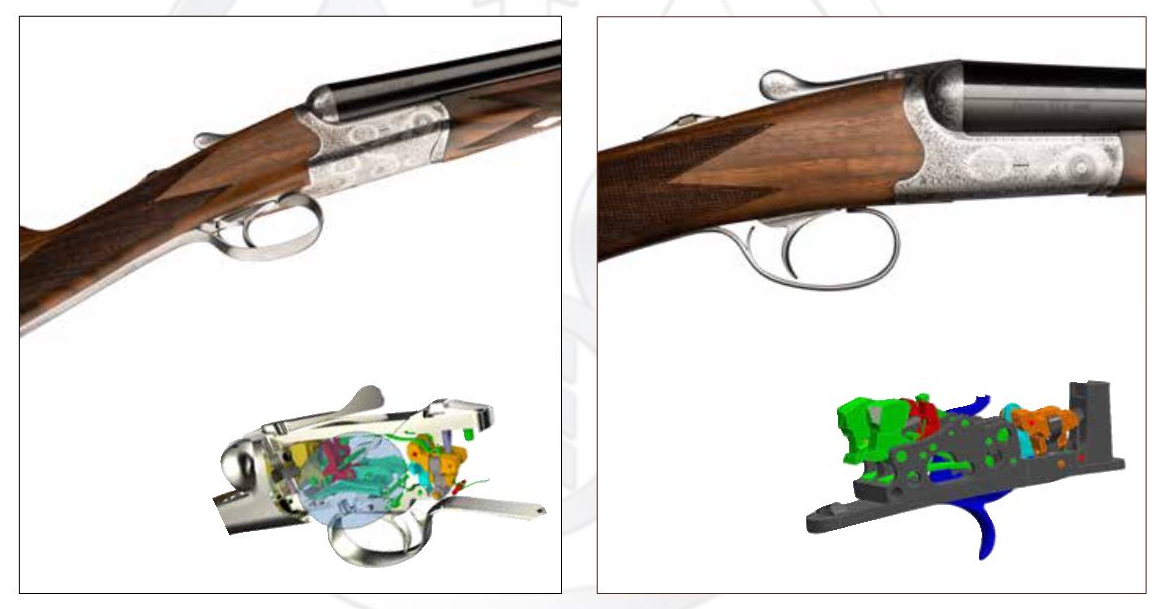 All component parts of the action are mounted on the trigger/action so no parts need to be separately attached to the wood of the stock. (Picture courtesy Beretta and all4shooters.com).

The action of the 486 Parallelo incorporates new design leaf springs that give the action a crispness of operation typically found on excellent quality guns. The trigger itself and the hammer fall provide a quick lock time and contribute to the naturally instinctive handling of the gun.

The barrels of the 486 Parallelo are hammer forged and fitted in a new Tri-Block system which keeps all welding of components inside the assembly and invisible. This system also permits greater precision in barrel mounting to ensure the barrels regulate perfectly. The gun has 3″/76mm chambers in the 12 gauge version so it can use any ammunition the shooter might choose. Unusually for such a traditionally style side by side shotgun the 486 Parallelo is fitted with the Beretta OptimaChoke system of interchangeable chokes. 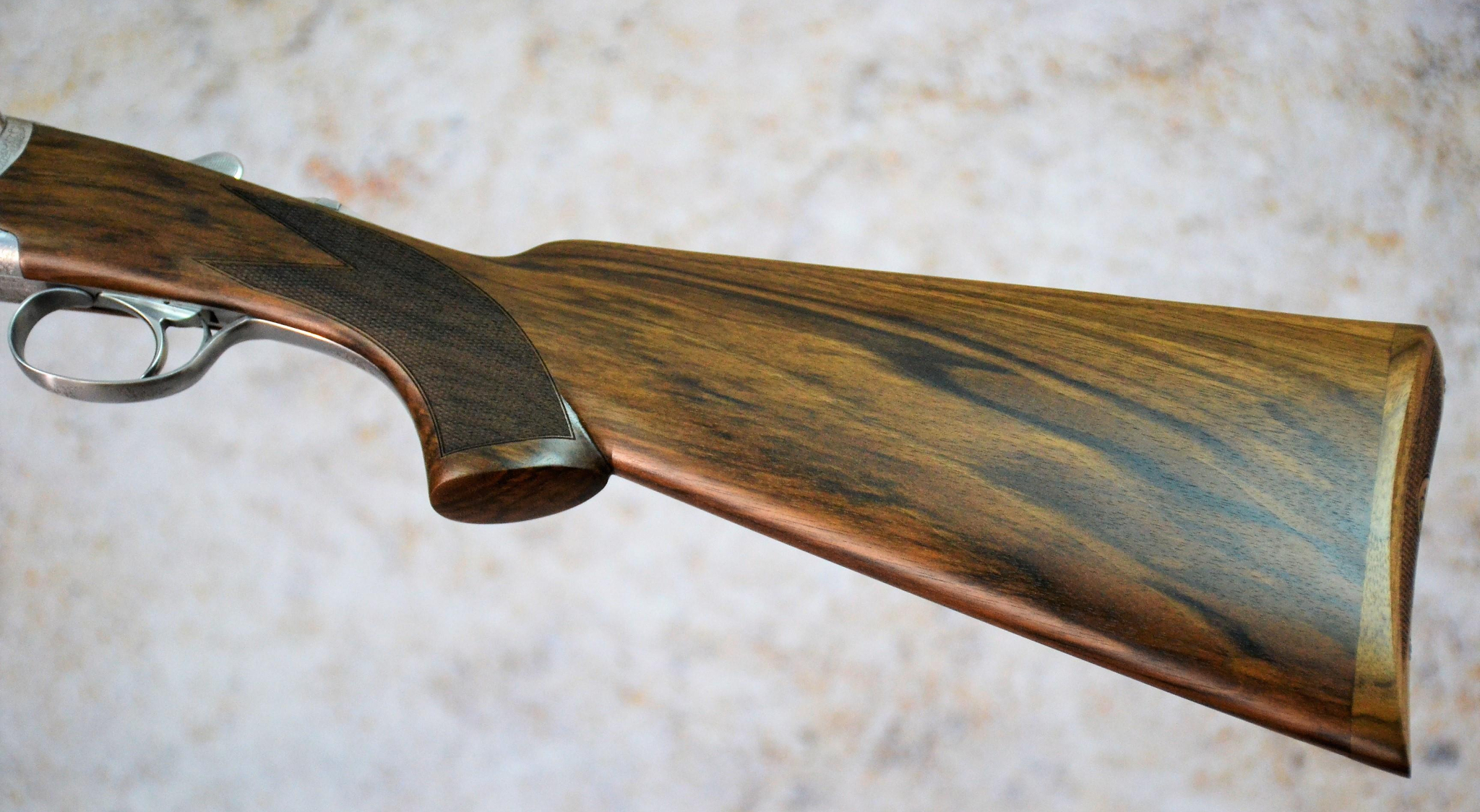 The Beretta 486 Parallelo comes in a range of models to suit most tastes. The butt stock can be ordered either in English straight hand style or in pistol grip style. Barrel lengths available are 26″, 28″ and 30″. There are three main models made for 2017; the 486 Parallelo has a nicely engraved action with the wood covering the trigger/hammer part of the action, the 486 Parallelo EL is the next model and has side plates which provide more area for the engraver’s art. The 486 EL can be had either with the action in silver finish or as the Tartarugato which has a delightful engraved case hardened finish. There is also a special and rather more expensive Marc Newson model which features Japanese/Chinese style dragons in its engraving likely to be attractive to Japanese and Chinese shooters. The Marc Newson model also has some styling differences to the other models.

Beretta 486 Parallelo model with English straight hand stock and with the stock wood covering the trigger/hammer part of the action. Scottish James MacNaughten guns would sometimes have the wood continue further up the action to the hinge and this Beretta action could likely be made like that if they chose to create such a model.

The Beretta 486 Parallelo has a gravitational safety that engages to prevent the gun discharging if it is accidentally dropped and has user selectable ejectors or extractors. Setting the gun for either selective ejector or extractor function is easy to do. The fore-end is removed and just ahead of the hinge end there is a switch. A rod tool is inserted into the hole in the switch and it is moved fully either to the eject or extract setting whichever the shooter desires. Changing the choke tubes is similarly easy requiring the use of the Beretta OptimaChoke tool to unscrew the one currently in the barrel and to screw in the one desired. The OptimaChoke system fitted to the 486 Parallelo makes it an exceedingly adaptable gun able to be used in any sporting situation one might think of. 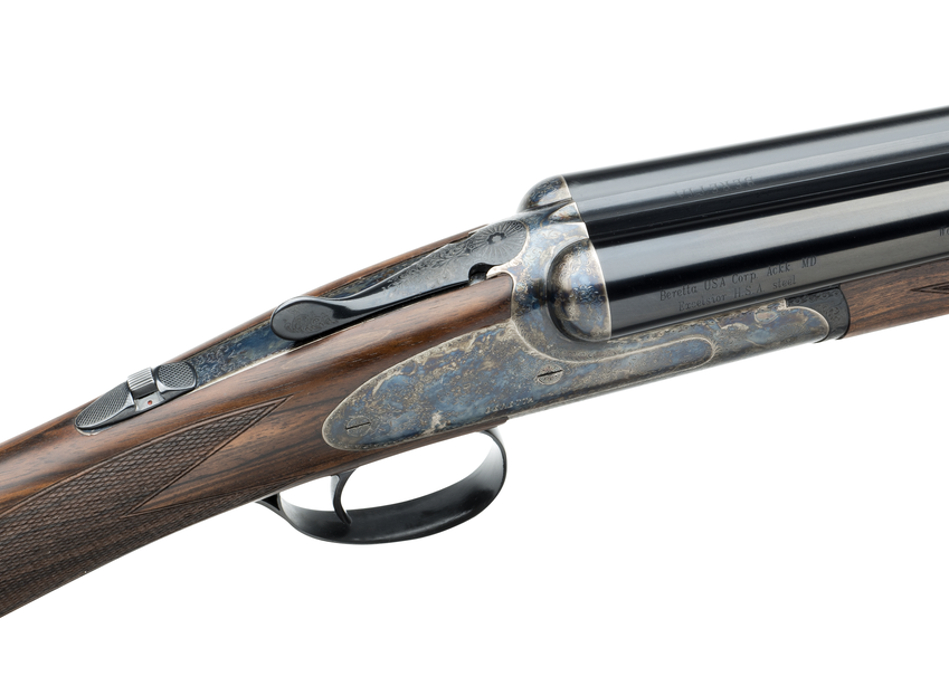 You will find the Beretta 486 Parallelo on Beretta’s web site if you click here.

The Beretta 486 Parallelo is an Italian gun in a traditional Scottish and English style. It combines Beretta’s great reliability and quality workmanship with styling and engineering that truly sets it apart. Just as the Italians make some of the most desirable cars in the world so the Beretta 486 Parallelo demonstrates that they make some of the most desirable guns in the world too.

(All pictures and video courtesy Beretta unless otherwise marked).