When we look at the Mossberg MVP series of rifles one is tempted to wonder why did it take so long for someone to think of this? Mossberg did think of it, and took the risk to bring into production their MVP series of rifles whose instant attractiveness lies in the fact that they not only come in some of the most common and desirable calibers on planet earth – the 5.56 NATO (based on the .223 Remington) and the 7.62 NATO (based on the .308 Winchester) but made their MVP rifles to be able to use the common magazines available for each. Sure there are lots of manufacturers out there making rifles in these calibers but Mossberg did something that the others did not, they made their MVP rifles to be able to use the standard AR15 magazines for the 5.56 NATO rifles and the standard M1A, M14 and AR10 magazines for the 7.62 NATO rifles. The Mossberg MVP rifles are made with all the flexibility that this range of magazine options enable. The result is one of the best general purpose rifles on the market, a rifle with bolt action accuracy and safety combined with the enormous flexibility the use of standard magazines offers. So it can be used for hunting, or large scale vermin control.

Mossberg’s MVP rifles not only come in some of the most common and cheapest to run calibers on the market, but the rifles themselves are made to be affordable yet of excellent quality. The Mossberg MVP qualifies as a “practical rifle” perhaps more than any other. The MVP series are made in four calibers, .204 Ruger, 5.56 NATO, 6.5mm Creedmore, and 7.62 NATO.

The MVP come in a range of model styles to best suit the practical use to which the rifle is to be put, and to suit the taste of the user.

The MVP Predator has a fluted 18½” barrel for 5.56 NATO and 7.62 NATO and a 20″ barrel for the 6.5mm Creedmore version. The barrels are of a medium fluted bull barrel style and threaded for a flash suppressor or noise moderator if desired. Stock is of a nice laminated timber which might not be Grade 5 walnut but which has an attractiveness all of its own.

The Mossberg MVP Varmint here pictured in 5.56 NATO with 11 round magazine and optional Vortex 4-16×50 rifle-scope.

The MVP patrol comes with a synthetic stock in either tan or black in the patrol rifle style. Calibers are 5.56 NATO and 7.62 NATO. The medium bull barrel length is 16¼” and is fitted with a flash suppressor. Optionally the rifle can be ordered with a Vortex Crossfire II 2-7×32 rifle-scope or as a bare rifle. Open sights are provided on this rifle, the rear sight is adjustable and the front sight has a fiber optic insert.

There is also a Thunder Ranch version of the MVP patrol that has a green synthetic stock and an 18½” barrel. The open sights of this model include a brass bead front sight.

The MVP Scout rifle is made in 7.62 NATO only and is fitted with a long Picatinny rail to facilitate the varied optical sight options that may be wanted on a rifle of this type. Stock is black synthetic. Barrel is a 16¼” medium bull barrel threaded and fitted with a flash suppressor. The supplied magazine is of 11 rounds capacity. This rifle is fitted with open sights in the form of a rear ghost ring and an optic fiber front sight.

The MVP FLEX is built on the FLEX patented TLS take down system which allows the rifle to be taken down and/or custom fitted. The FLEX components allow interchangeability between firearms fitted with FLEX fittings. There is an MVP FLEX model available with a six position adjustable stock. Stock colors are black or tan. 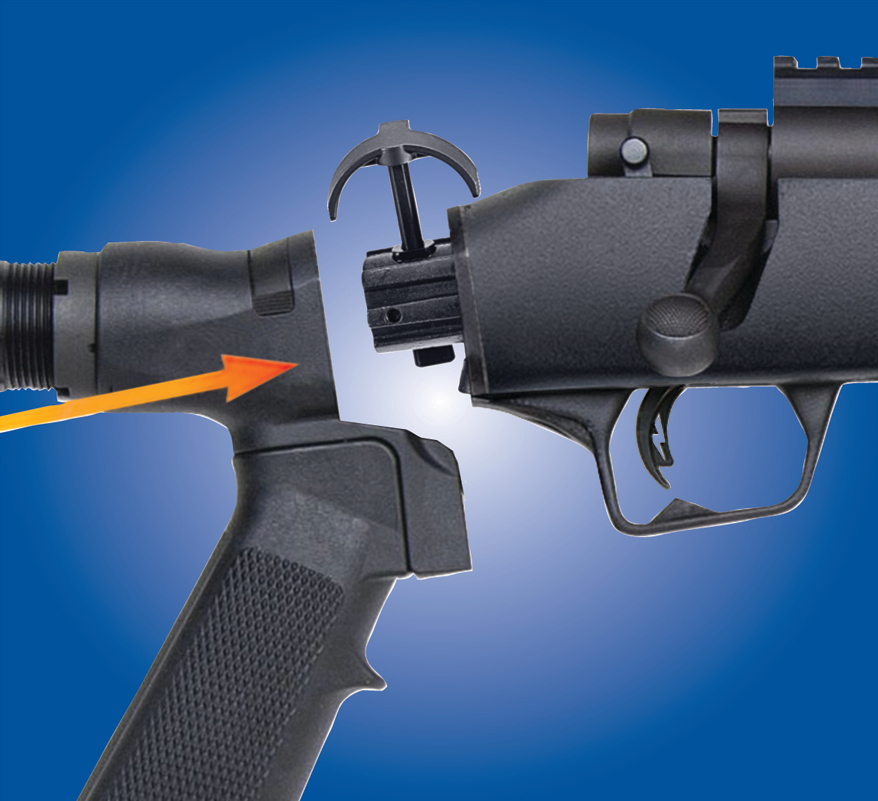 The FLEX system enables a no tool take down and interchangeability with other FLEX firearms and products.

The MVP FLEX is available in 5.56 NATO and 7.62 NATO calibers. The barrel for the MVP FLEX rifles are 18½” with a medium bull profile, fluted and threaded.

There are two versions of the MVP LR (Long Range) rifle; the MVP LR and the MVP LR-T (Tactical Rifle). The MVP LR is available in 5.56 NATO with a 20″ barrel, 6.5 Creedmoor with a 22″ barrel, and 7.62 NATO with a 20″ barrel. These rifles have fluted medium bull profile barrels which are threaded for flash suppressors or noise moderators. The stock comb is adjustable and the stocks have three sling swivel eyes.

The MVP LR-T models are made in 5.56 NATO and 7.62 NATO with 16¼” medium fluted bull barrels threaded for flash suppressor or noise moderator.

The MVP rifles are a little different between the models made for the smaller 5.56 NATO and .204 Ruger cartridge case which use the AR15 type magazines and the larger 6.5 Creedmoor and 7.62 NATO case which use the M1A, M14 and AR10 type magazines. The AR15 type magazine requires the bolt to fit deeply down into the magazine to pick up a cartridge. In order to achieve this Mossberg created a flip down bolt extension that drops down to pick up a cartridge from the magazine and retracts as the bolt is withdrawn to clear the remaining rounds. 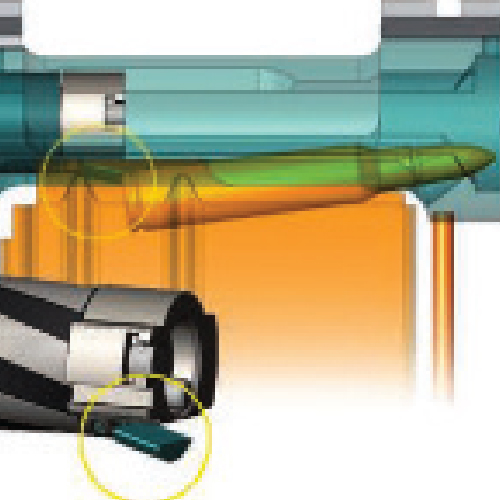 For the small cases that use the AR15 type magazine Mossberg use a retracting flap under the bolt to pick up the cartridge from the deep AR15 magazine.

For the larger 6.5 Creedmoor and 7.62 NATO the design of the magazines does not require this feature and so the larger caliber bolt is of a conventional recessed type but has fixed extensions under the bolt to the left and right to ensure reliable cartridge pick up. 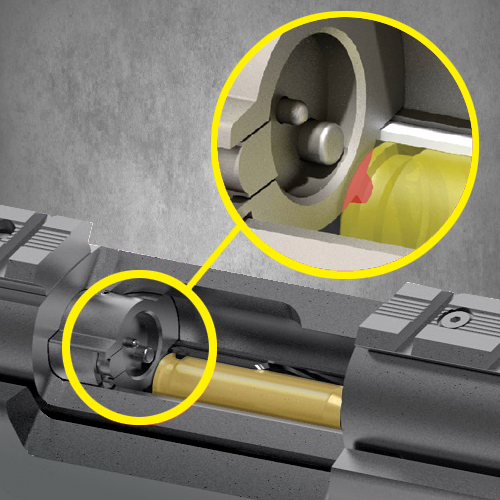 For the larger 7.62 NATO and 6.5 Creedmoor cartridges feeding from the M1A, M14 and AR10 magazines the bolt face does not need the extending flap used for the smaller calibers.

The bolt face of both the small caliber and large caliber MVP rifles is of a conventional recessed type with blade extractor and plunger ejector.

You will find the full current range of Mossberg MVP rifles on their website if you click here.

The Mossberg MVP rifles have performed well in the field and reviewers tend to extol their virtues.

You will find a review of the 5.56 NATO MVP Predator on the NRA’s American Rifleman website if you click here.

You will find a review of the 7.62 NATO MVP Predator on the NRA’s American Rifleman website if you click here.

And if you are not a member of the NRA yet or need to renew your membership you can do so if you click here. Membership of a national shooting organization is one contribution each of us can make to protecting our right to keep and bear arms.

What better way to finish up this post than to enjoy YouTube shooting celebrity hickock45 shooting the Mossberg MVP Patrol model and giving us his take on it?

(All pictures courtesy Mossberg except where otherwise marked).