Ever since its introduction in 1964 the Pontiac GTO has been a car to drool over. The design team at GM quite simply got this car right from the beginning and during its sixties heyday it was one of the most head turning, crowd gathering automobiles extant. 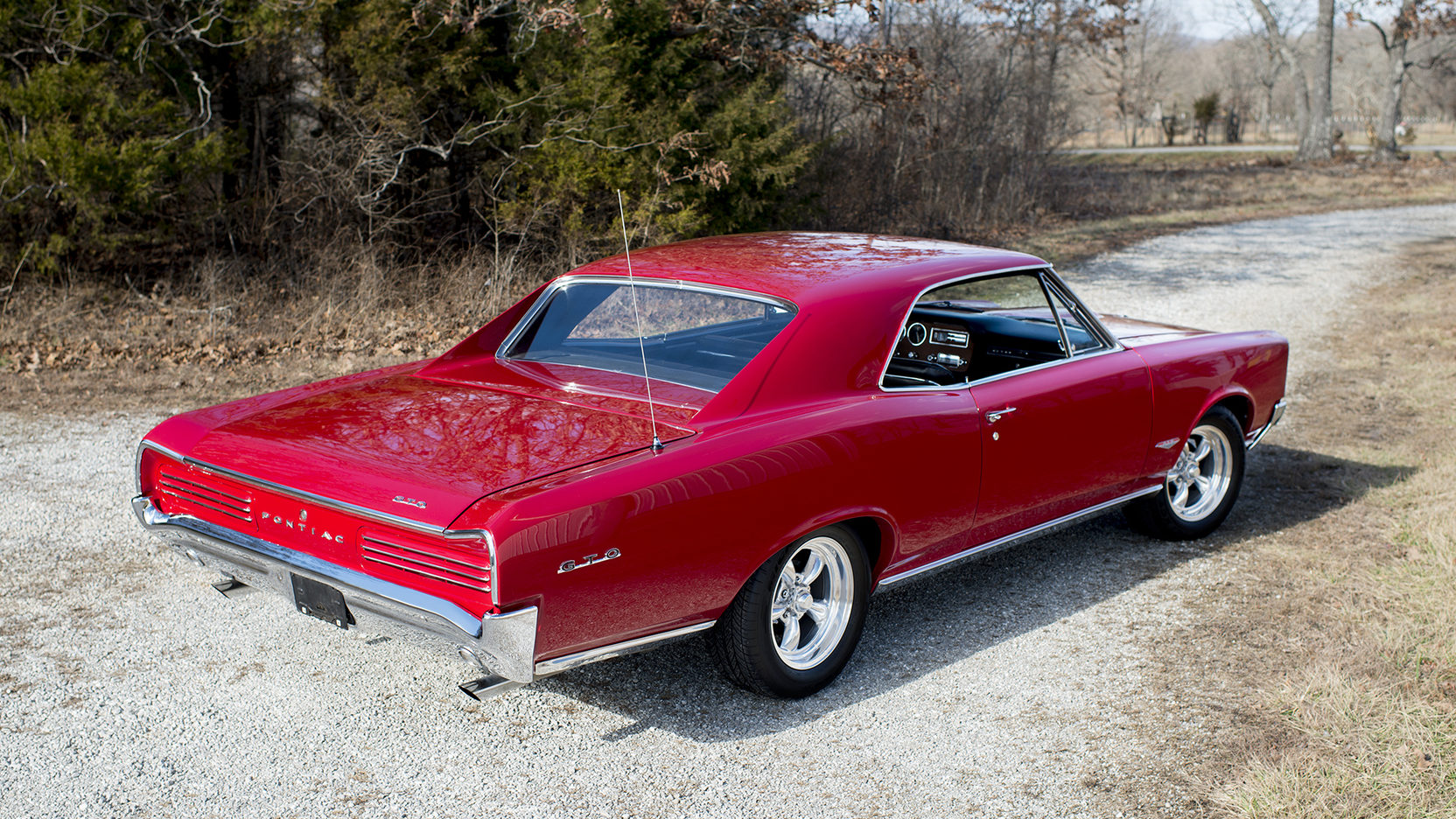 The 1966 Pontiac GTO was one of the best looking US cars of its era. The louvered cover over the rear lights was unique to the GTO.

General Motors initially decided to try the GTO concept in 1964 by offering it as an option package on the Pontiac Tempest. It was well received and in 1966 the GTO was offered as a distinct model for the first time. The GTO was intended to appeal to performance car buyers who would want a modest size car with a big engine and excellent performance. It was the same thinking that led to Ford creating the Mustang. The name “GTO” was put forward by John Delorean and was inspired by the Ferrari 250 GTO. The car was given a distinct “Coke Bottle” body style with louvered rear lights that were unique to the GTO. 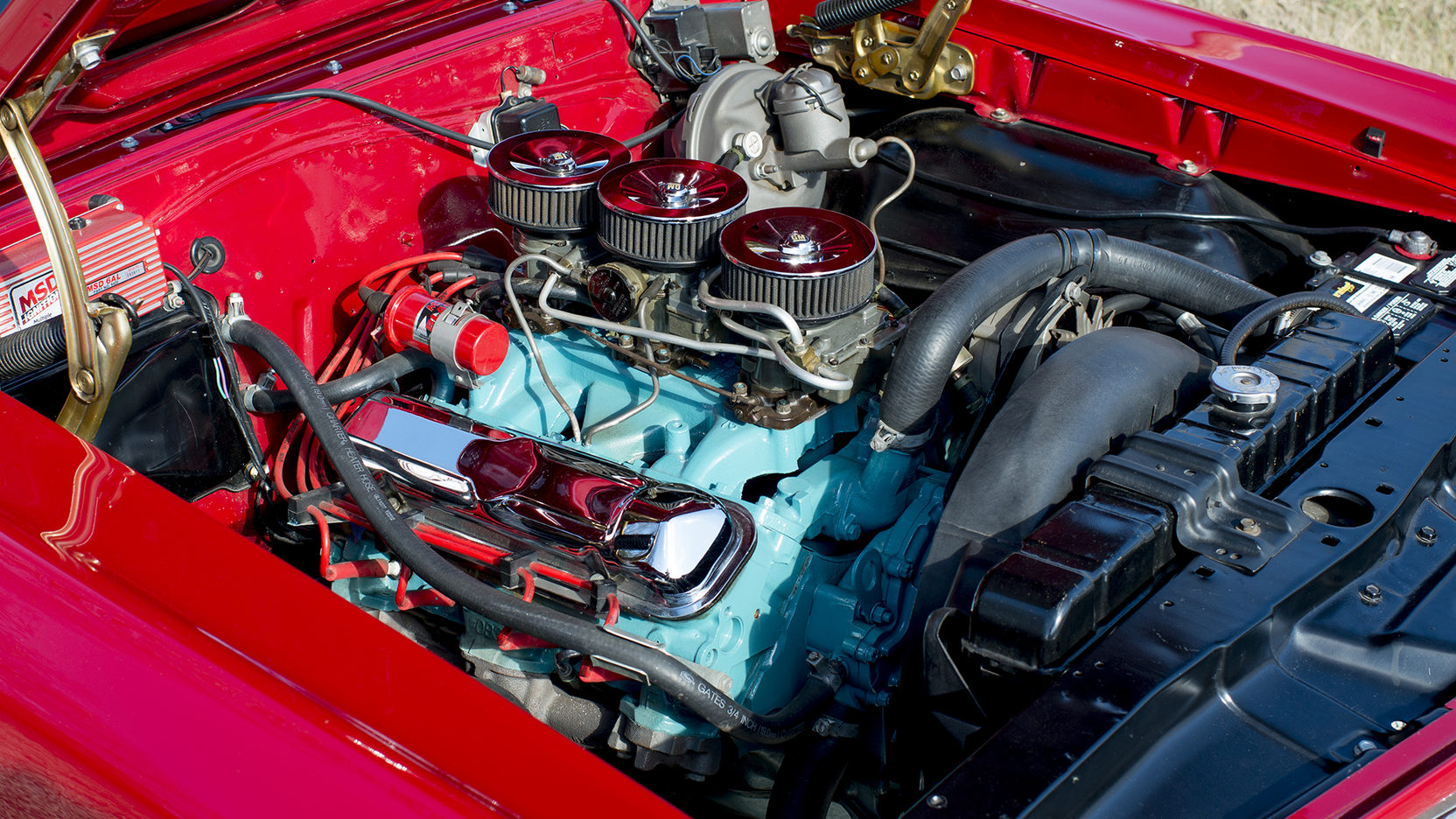 The GTO was intended to provide a large performance engine in a modest size sporting car.

For its 1966 debut as a distinct model as opposed to being a factory option package the GTO retained the same 389 cu. in. (6.5 liter) V8 engine as fitted to the 1965 model. This engine was available in standard form fitted with a single Carter AFB four-barrel carburettor or the optional Tri-Power engine which sat three two-barrel Rochester 2G carburetors on top of the engine and had the “S cam” sports camshaft. The Tri-Power engine for 1966 produced a healthy rubber burning 360hp. Both engines had modified cylinder heads with re-cored intake passages and high rise intake manifolds. 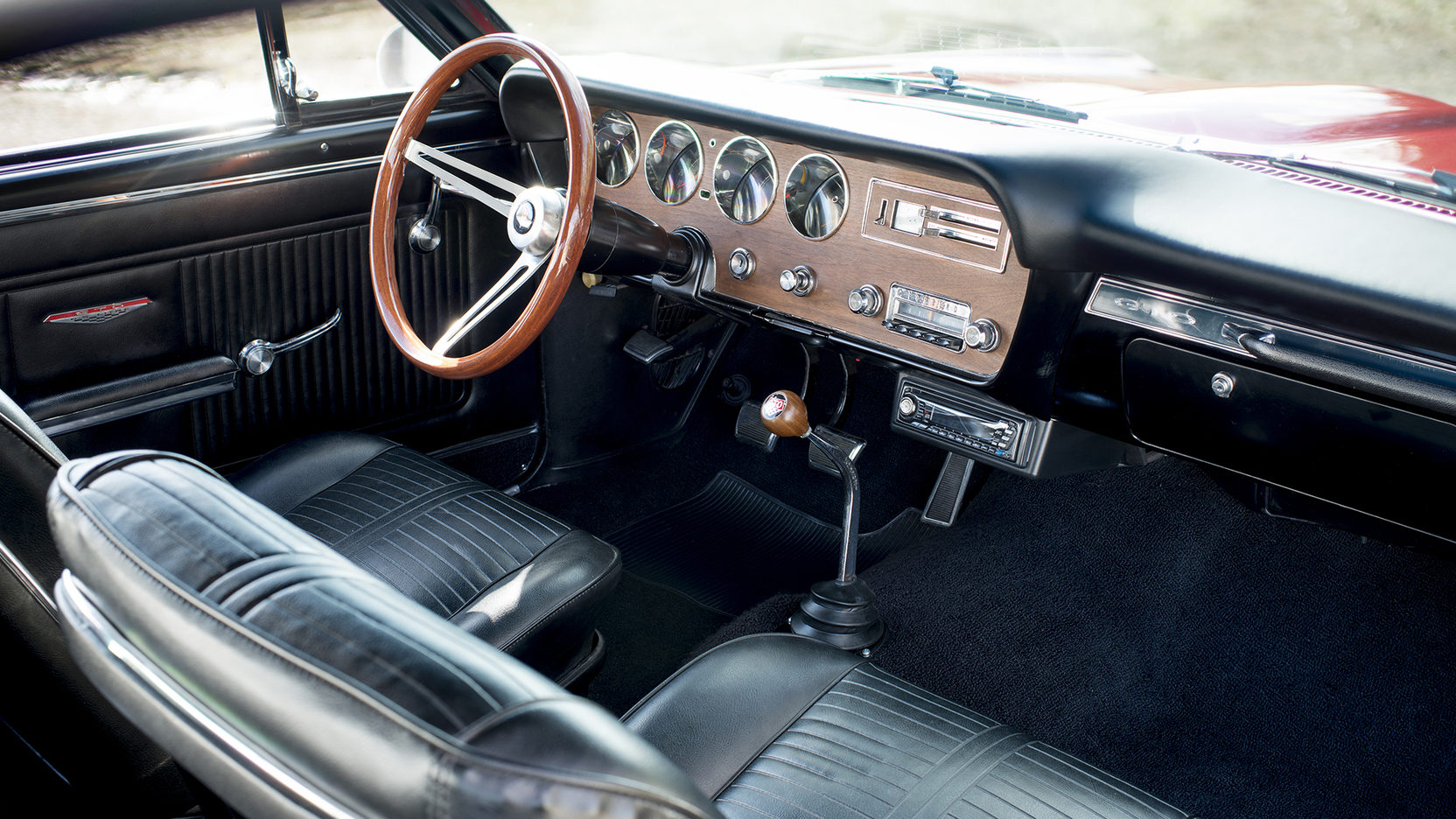 This 1966 GTO is fitted with the optional Muncie 4-speed transmission with Hurst shifter.

Transmission options for the 1966 GTO were a three speed manual as standard, a four speed wide ratio, a four speed close ratio, and a two speed automatic. Brakes were drums all around as was typical of US cars of the period but the drum’s brake lining area had been increased in 1965 by 15% to ensure the GTO could stop as well as go. Power brakes with metallic linings and power steering improved the behavior of the car greatly as did the fitting of a limited slip differential. The standard brakes with organic linings were said to be inadequate for a car with this much power and speed on road test. Suspension featured a front anti-sway bar and heavy duty shock absorbers. 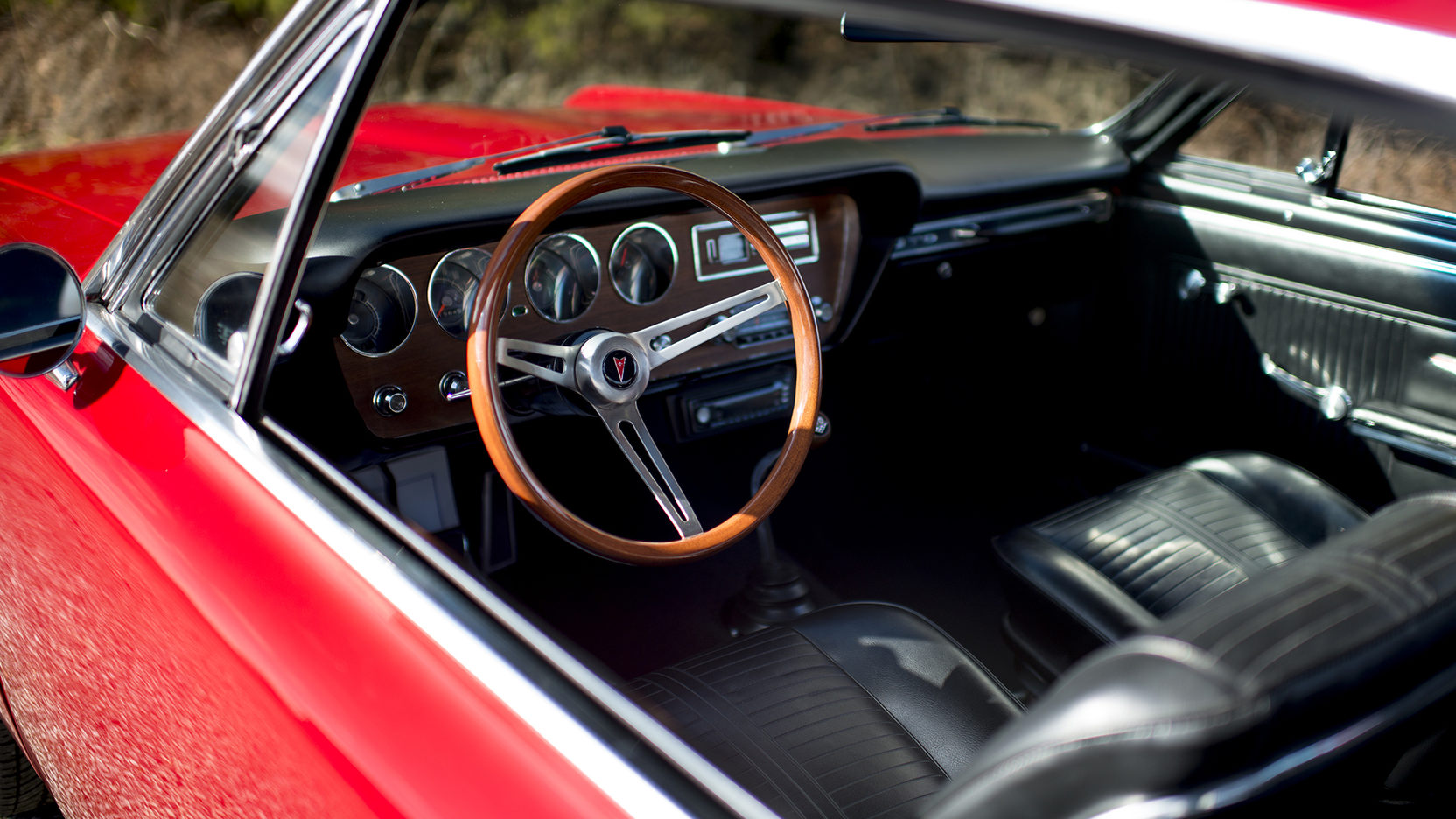 With the Tri-Power engine and limited slip differential the GTO was capable of standing to 60mph in 5.8 seconds, a standing quarter mile in 14.5 seconds, and a top speed of 114mph at the engine’s red line of 6000rpm. 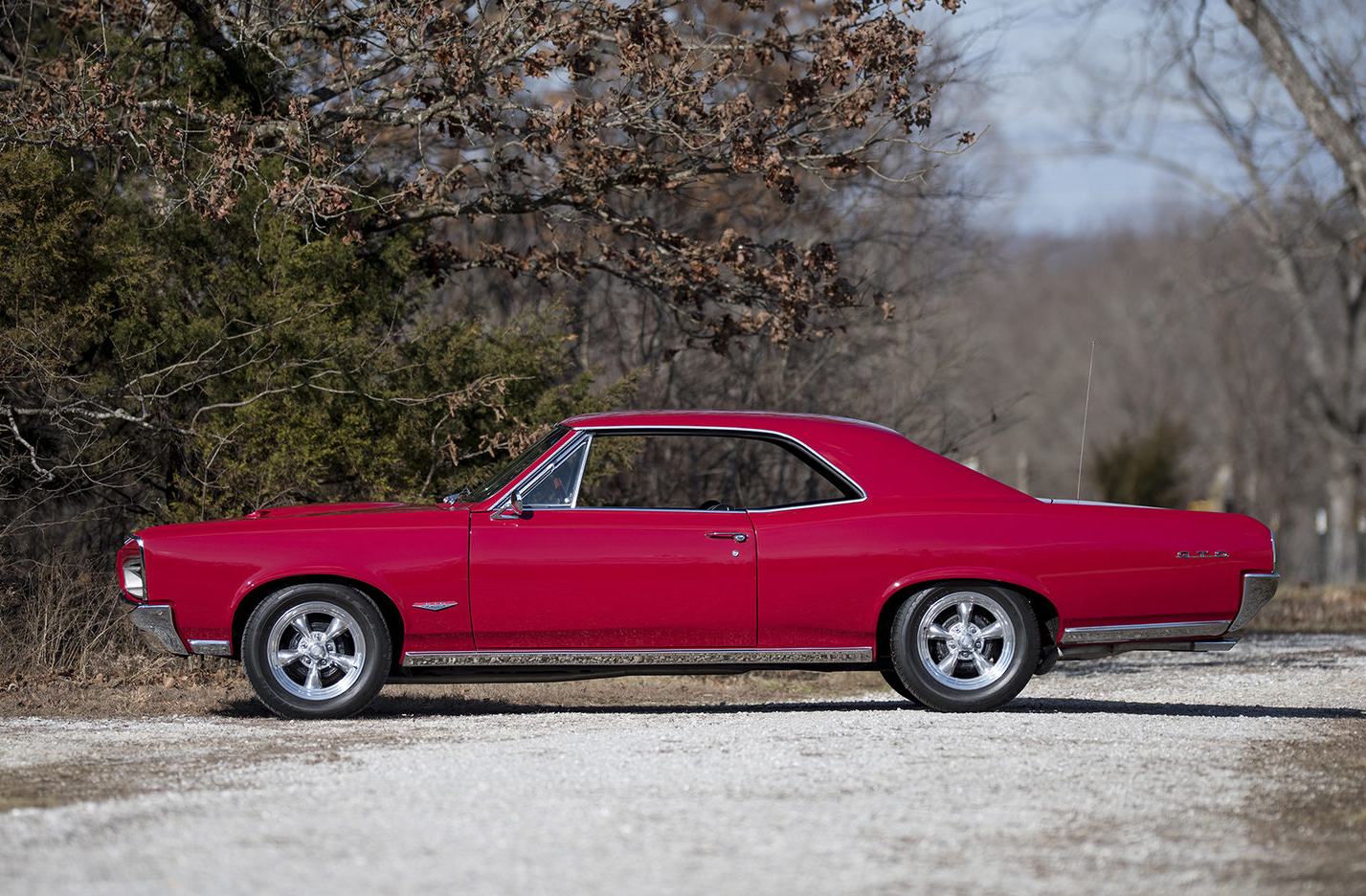 The 1966 Pontiac GTO is one of the most iconic American cars of the sixties.

The Montero Red 1966 Pontiac GTO in our photos is coming up for sale by Mecum Auctions at their Kansas City auction to be held over 24th-25th March 2017.

The features of this car as described by Mecum Auctions are as follows:-

This looks to be a desirable restored example of this iconic Pontiac. 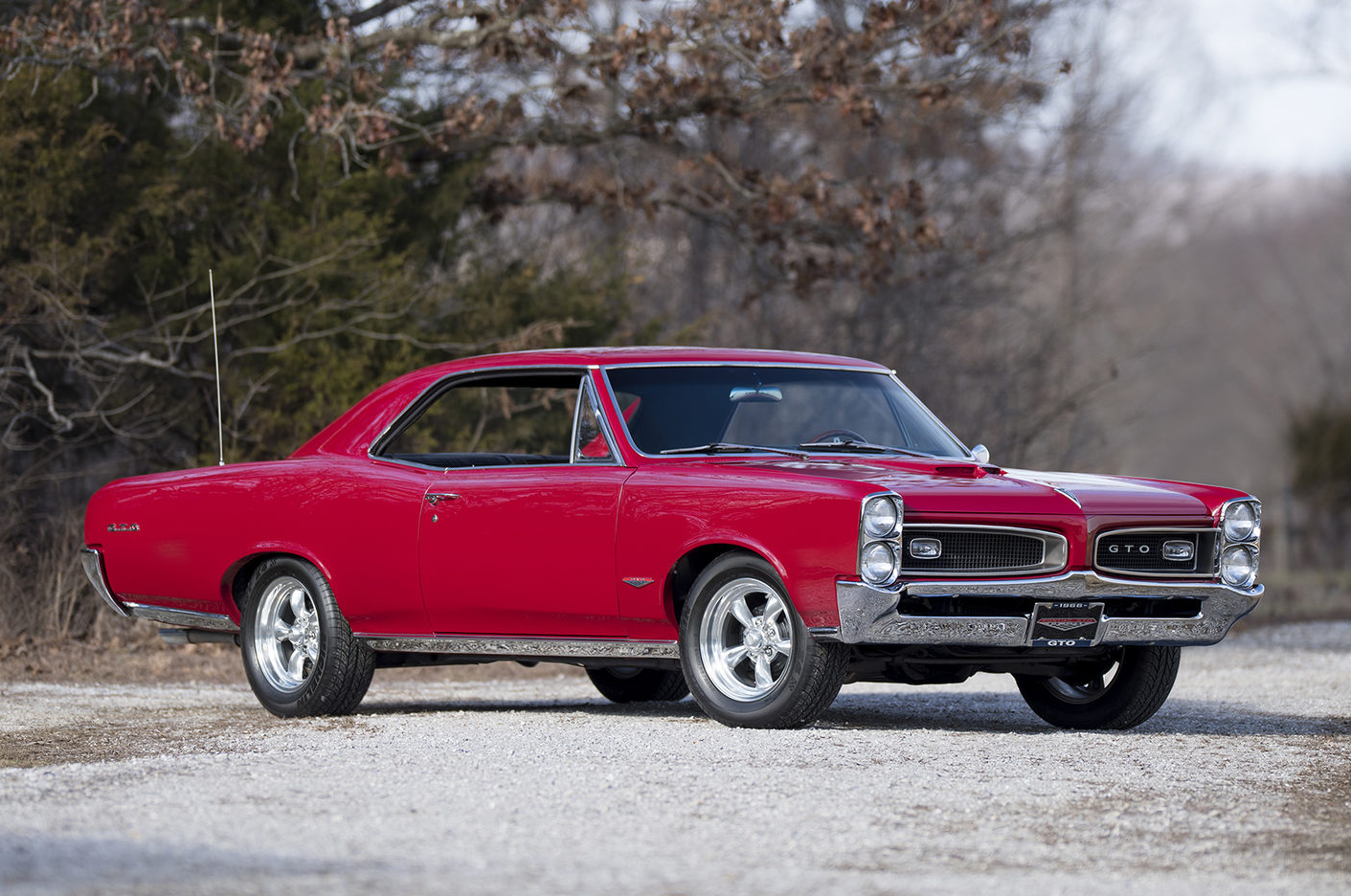