The Colonial British and Americans took a somewhat different approach to revolvers. For Americans the Colt Single Action Army of 1873 was by and large the standard although the single action Smith & Wesson No. 3 (and the Schofield) gained some traction. Colt made their double action revolver of 1877, but this proved to be unreliable, and so although favored by the likes of Billy the Kid it earned itself the nickname of “The gunsmith’s friend” and was not favored as a revolver you would stake your life on.

British maker Webley were quick to appreciate the advantages of the double-action and began making solid frame reliable double action revolvers in the 1860’s, notably the Webley RIC (Royal Irish Constabulary) which was adopted in 1868, and the Army Express models which date from the late 1860’s and 1870’s. These revolvers earned themselves a good reputation, but despite their being double action, they were solid frame revolvers with a fixed cylinder and just like the Colt Single Action Army, they had to be unloaded and reloaded one cartridge at a time. In his book “The Gun and its Development” W.W. Greener suggests that if six shots were not enough to dispel the emergency then the remaining time might be better spent than trying to hurriedly reload. Greener was probably suggesting prayer, although once a solid frame revolver was empty the prayer might have been accompanied by use of a saber in an attempt to survive the encounter: swords don’t run out of cartridges. 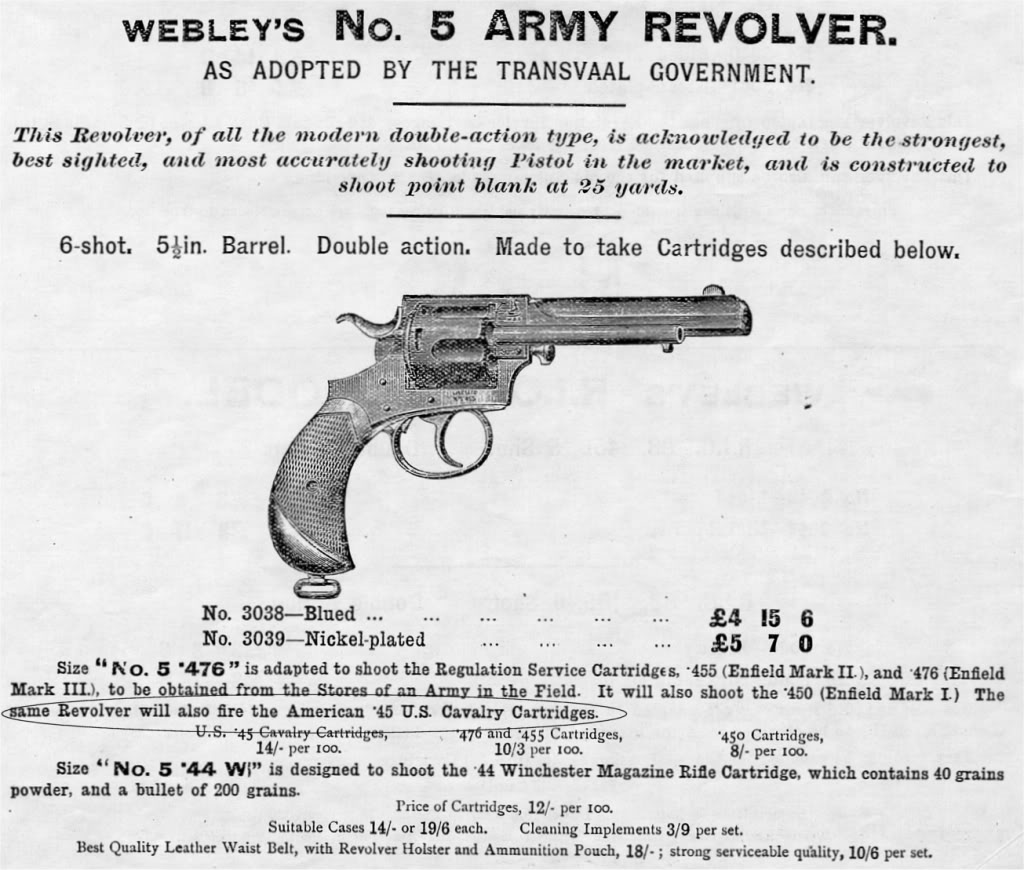 Advertisement for the Webley No. 5 Army Revolver. The advertisement states the revolver will also fire the American .45 US Cavalry cartridge. This almost certainly refers to the .45 Smith & Wesson Schofield cartridge and not the .45 Colt.

The British were however keen to solve the problem of reloading a revolver quickly and the obvious answer was to make the revolver open just like a double barrel shotgun or rifle. There were a number of mechanisms created, generally based on the same sort of locking principles as the double barreled gun, and one of the best of these was that of Charles Pryse “the Younger”, which he patented on 15th November 1876 with patent number 4421. 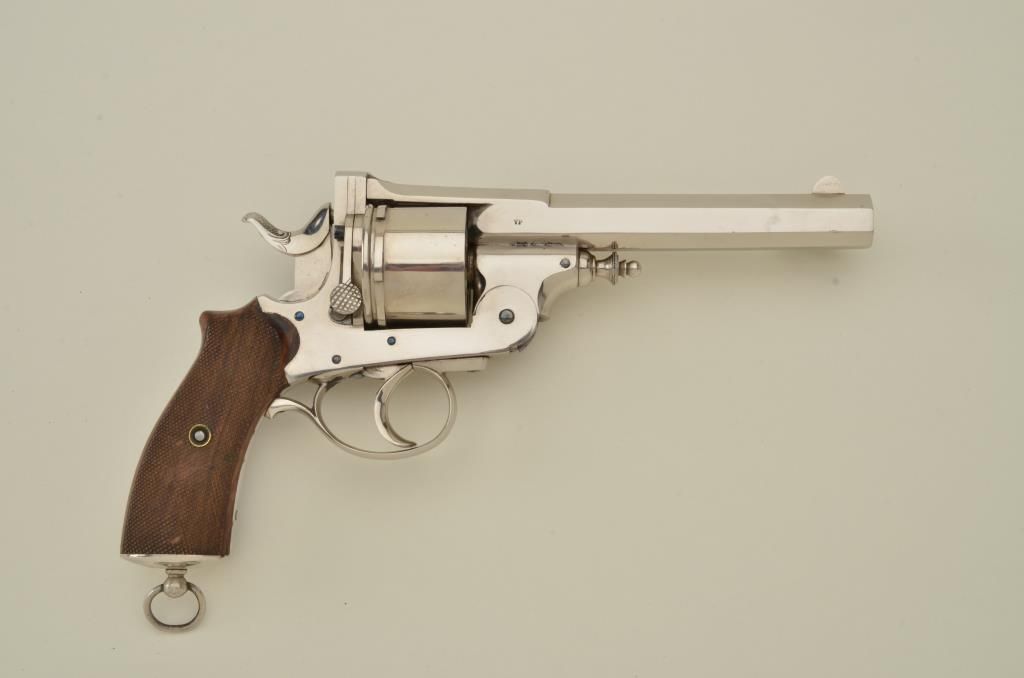 Charles Pryse patent system of opening the revolver so as to permit ejection of all fired cases in one action, and enabling more rapid reloading, was adopted by a number of gunmakers both in Britain and Belgium. The Pryse system had the barrel and cylinder hinged on the frame and attached at the top strap by two pins mounted on spring loaded levers. To open the revolver the correct way, the left hand reached over the top of the barrel and top strap to hold the revolver whilst the right hand thumb and forefinger depressed the levers on either side. This retracted the locking pins allowing the revolver frame and grip to be lowered and the spent cases ejected. If the revolver was opened this way the ejected cartridges would fall clear and not drop into the action. Once opened the revolver could be loaded with cartridges from the belt or bag. 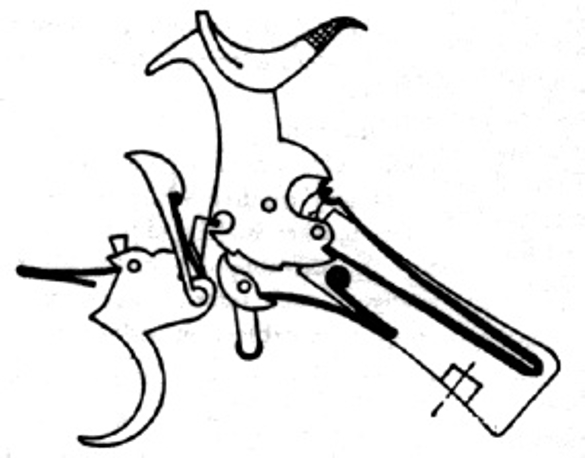 The Pryse patent was not limited to the opening and locking of the action but Charles Pryse is credited with the first rebounding hammer mechanism which was part of his 1876 patent.

There is a wealth of information on Webley revolvers in the book “The Webley Story” by W.C. Dowell, which you will find on Amazon if you click here. 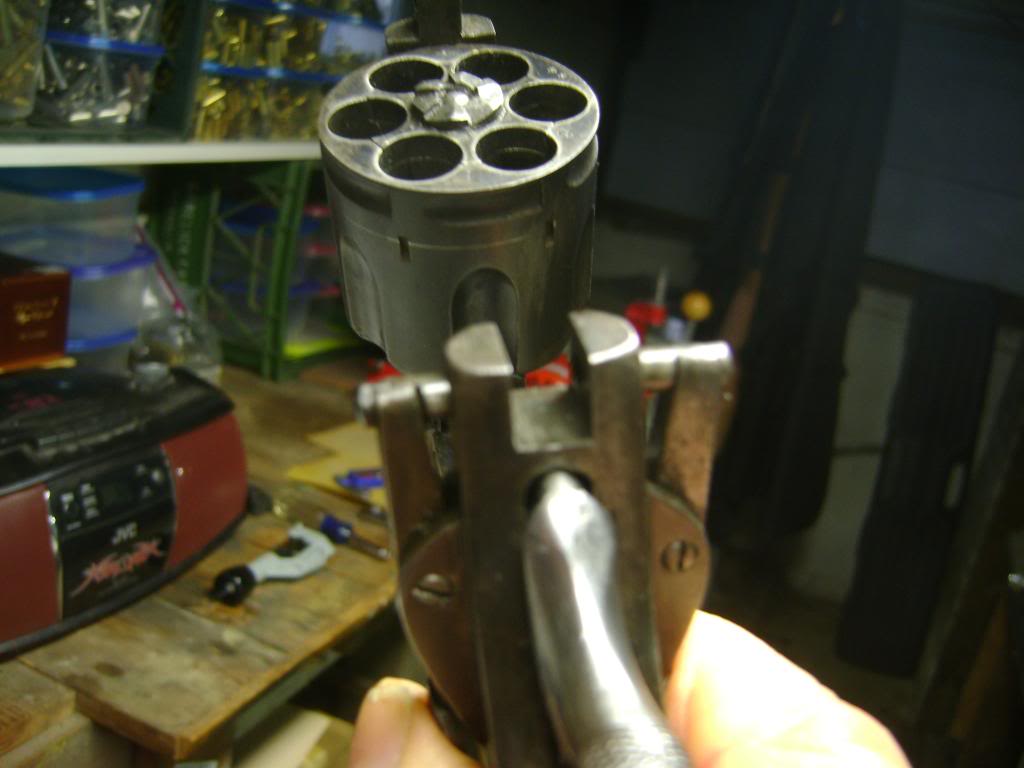 Shooter’s eye view of an open Pryse revolver. Note the top strap extension drilled to accept the locking pins, and the pins themselves are shown here retracted by hand pressure on the side levers. (Picture courtesy “The Goose” @ northwestshooters.com).

Webley made Webley-Pryse revolvers until they moved over to the more simple and reliable Edwinson Green “Stirrup Latch” type of top locking system which then became the standard for the rest of the life of the top-break Webley and Enfield revolvers of the First and Second World Wars. 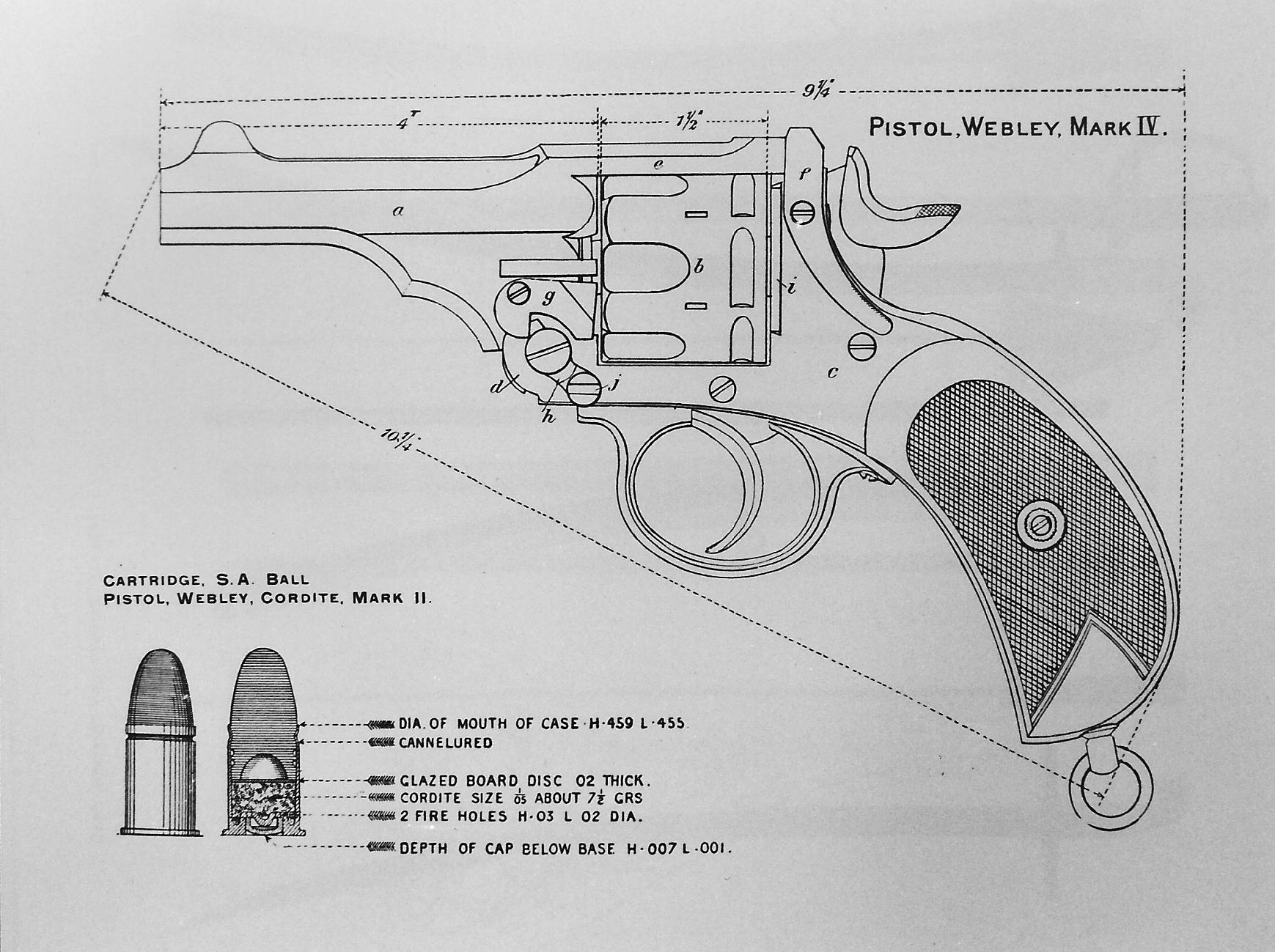 Webley Mark IV revolver using the Edwinson Green Stirrup Latch. This was stronger and locked with more certainty than the Pryse system.

Although superseded by the Edwinson Green Stirrup Latch system the Webley-Pryse revolvers were sturdy and reliable arms which saw service in both the First and Second World Wars, sometimes being handed down from father to son, and even to grandson. 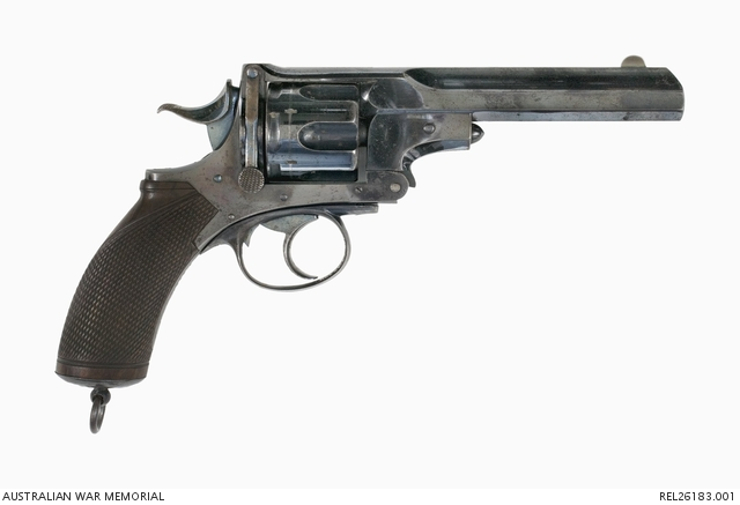 The revolver is associated with Lieutenant Colonel Thomas Rowe, commanding Officer NSW Corps of Engineers. Rowe more than likely purchased the Webley Pryse Revolver during a visit to the United Kingdom during 1884-1885. This Revolver was also carried by his son Captain Harry Ruskin-Rowe, Sea Transport Service, Australian Army Service Corps, Australian Infantry Force in the First World War and his grandson 411389 Pilot Officer Anthony Thomas Ruskin-Rowe 452 Sqn, Royal Australian Air Force (Spitfire). During Raid 55 on Darwin, Pilot Officer Rowe was shot down and killed in action on the 20th of June 1943. The revolver was discovered on his body when his aeroplane, BS 174 crashed. (Picture and description courtesy Australian Warm Memorial). 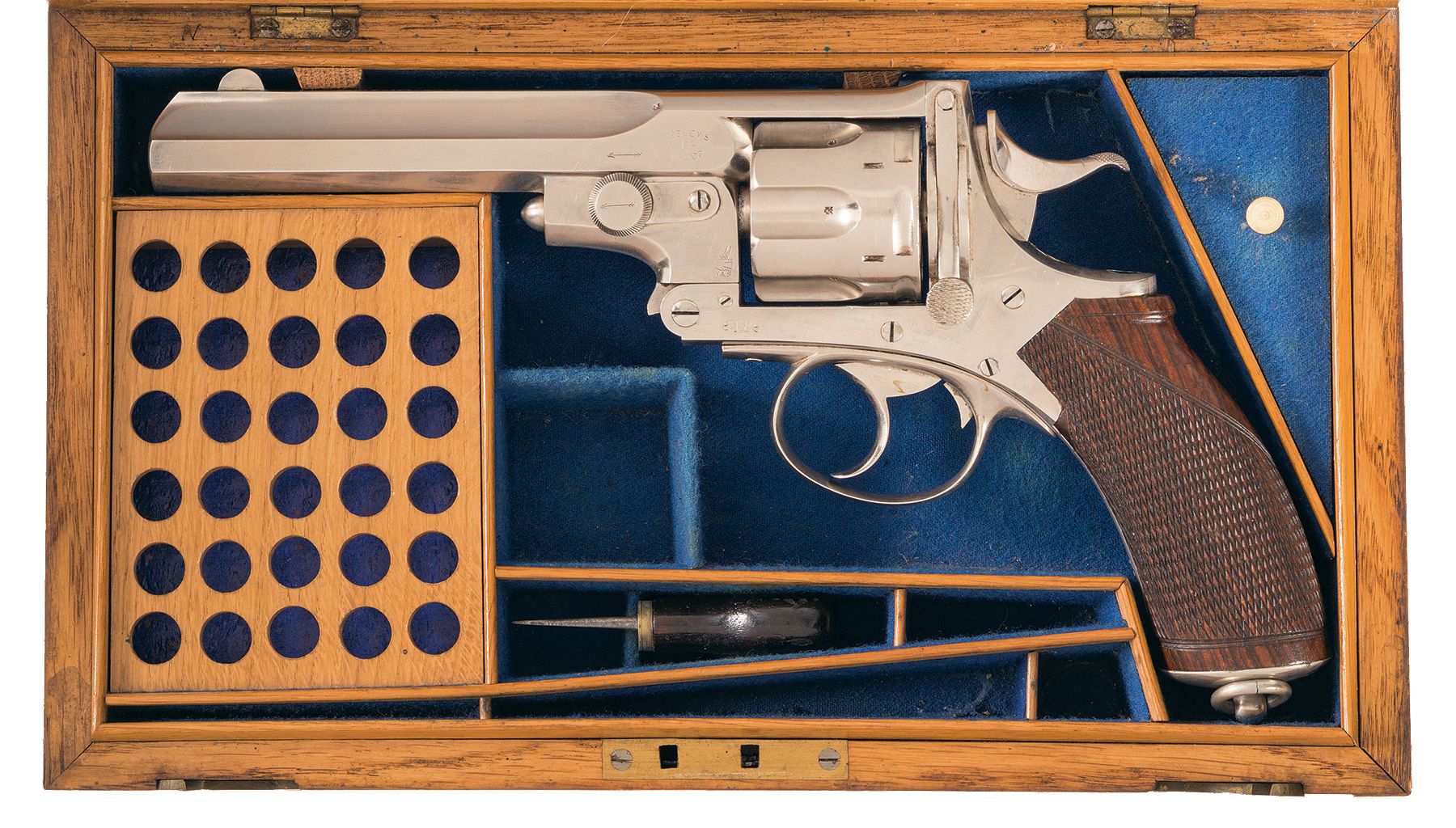 The sale revolver is described by Rock Island Auction as follows:

“Blade front and notch rear sights, with “ARMY & NAVY C.S.L.” on the barrel rib, “WEBLEY’S/No 4/455 CF” and the “winged bullet” logo on the left side of the barrel, and matching numbers on the cylinder. Fitted with a checkered one piece grip and a nickel finished grip cap with a lanyard swivel. With a hardwood case, which is lined in blue felt and fitted with a paper tag inside the lid, “P.WEBLEY & SON,/BIRMINGHAM,/PATENTEES/&/MANUFACTURERS OF GUNS, RIFLES & REVOLVERS/MILITARY CONTRACTORS TO HER MAJESTYS/WAR DEPARTMENT & C.” in black, with an empty 30-round cartridge block and a small wood handled screwdriver.”

“Excellent with 97% plus original nickel finish, showing some light handling marks and spotting overall. The very fine grips show some light wear and pressure dents, and the very fine case shows some scuffs, light stains on the retailer label, and minor stress lines. Mechanically excellent.”
You will find the sale page for this revolver if you click here.
Expected sale price is in the range USD$4,500-$7,000.